Zonal Center for Information and Interpretation 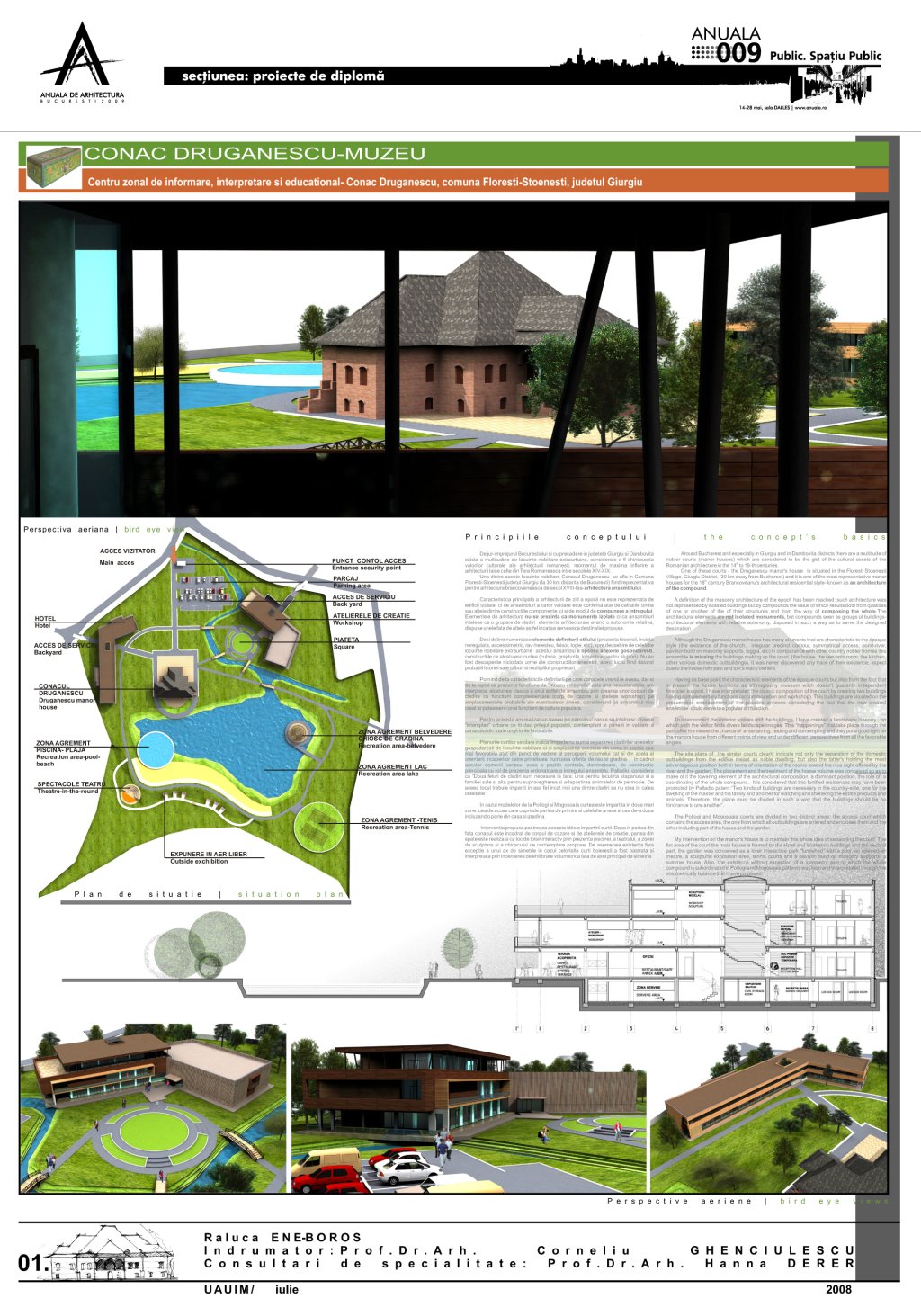 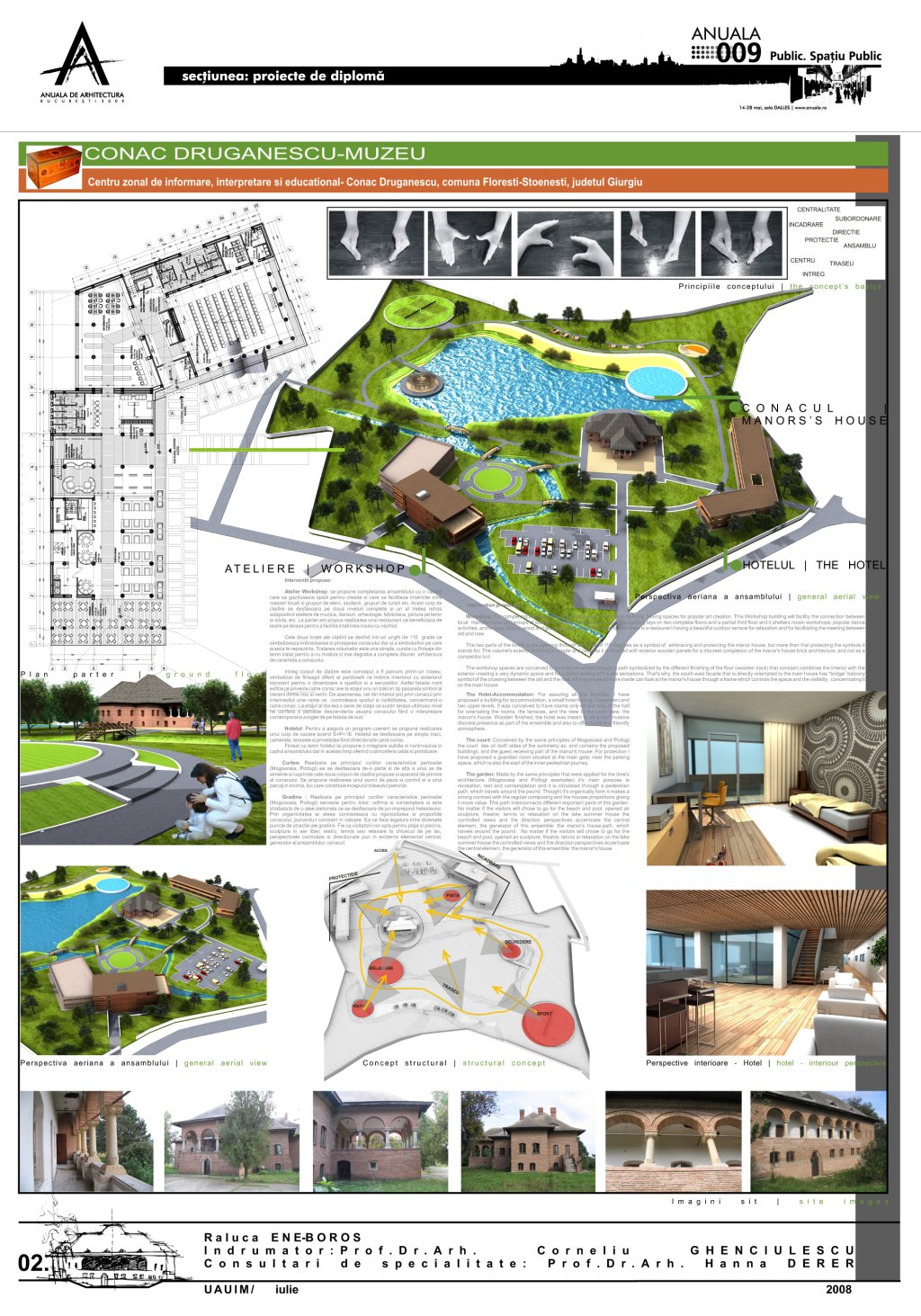 Around Bucharest and especially in Giurgiu and in Dambovita districts there are a multitude of nobler courts (manor houses) which are considered to be the gist of the cultural assets of the Romanian architecture in the 14th to 19-th centuries.

One of these courts - the Druganescu manor’s house – is situated in the Floresti Stoenesti Village, Giurgiu District, (30 km away from Bucharest) and it is one of the most representative manor houses for the 18th century Brancoveanu’s architectural residential style- known as an architecture of the compound.

A definition of the masonry architecture of the epoch has been reached: such architecture was not represented by isolated buildings but by compounds the value of which results both from qualities of one or another of the of their structures and from the way of composing the whole.

Although the Druganescu manor house has many elements that are characteristic to the époque style (the existence of the church, irregular precinct contour, symmetrical access, pond-river, pavilion build on masonry supports, loggia, etc) in comparance with other country nobler homes this ensemble is missing the buildings making up the court. (the house, the servants room, the kitchen, other various domestic outbuildings). It was never discovered any trace of their existence, aspect due to the house roily past and to it’s many owners.

Having as base point the characteristic elements of the époque courts but also from the fact that in present the house functions as ethnography museum witch doesn’t guaranty independent financier support, I have interpretated the classic composition of the court by creating two buildings having complementary functions (accommodation and workshop). This buildings are situated on the presumptive emplacement of the possible annexes considering the fact that the new created ensemble could serve to a popular art function. I completed the ensemble in a straight manner, showing the real age of the new architectural objects, not copying but interpretating the initial concept.

To interconnect the exterior spaces and the buildings, I have created a landscape itinerary , on which path the visitor finds divers landscape images. This “happenings” that take place through the path offer the viewer the chance of entertaining, resting and contempling and they put a good light on the manors house from different points of view and under different perspectives from all the favorable angles.

The rugged land used to secure a more efficient defense, often leads to the construction of wall precincts of uneven form plans, on the contures of which are disposed the structures making up the court compounds.

The site plans of the similar courts clearly indicate not only the separation of the domestic outbuildings from the edifice meant as noble dwelling, but also the latter’s holding the most advantageous position both in terms of orientation of the rooms toward the nice sight offered by the river and the garden. The placement and the treatment of the house volume was conceived so as to make of it the towering element of the architectural composition, a dominant position, the role of a coordinating of the whole compound.

It is considered that this fortified residences may have been promoted by Palladio model:

“Two kinds of buildings are necessary in the country-side, one for the dwelling of the master and his family and another for watching and sheltering the estate products and animals. Therefore, the place must be divided in such a way that the buildings should be no hindrance to one another”.

The Potlogi and Mogosoaia courts are divided in two distinct areas: the access court which contains the access area, the one from which all outbuildings are entered and encloses them and the other including part of the house and the garden. My intervention on the manor’s house is to maintain this whole idea of separating the court. The fist area of the court the main house is framed by the Hotel and Workshop buildings and the second part, the garden was conceived as a loisir interactive park “furnished” with a pool, an opened-air theatre, a sculptural exposition area, tennis courts and a pavilion build on masonry supports, a summer house. Also, the existence without exception of a symmetry axis to which the whole compound is subordinated in Potlogi and Mogosoaia patterns was kept and interpretated through the volumetrically balance that I have proposed.

The manor house: Due to it’s excellent condition I am recommending only finishing renovations and keeping the actual function of ethnographic museum.

Workshop: For completing the ensemble I have proposed a Workshop building, having spaces for popular art creation. This Workshop building will facility the connection between local manufactures and groups of students, pupils, tourist groups, etc. This building lays on two complete floors and a partial third floor and it shelters music workshops, popular dance activities, archeology, library, wood and glass painting, etc. At the ground floor there is a restaurant having a beautiful outdoor terrace for relaxation and for facilitating the meeting between old and new.
The two parts of the building are opening through an angle of 110 degrees as a symbol of embracing and protecting the manor house, but more than that protecting the symbols it stands for.
The volume’s exterior finishing is simple and clean as it is finished with exterior wooden panels for a discreet completion of the manor’s house brick architecture, and not as a competitor to it.
The workshop spaces are conceived to be interconnected through a path symbolized by the different finishing of the floor (wooden track) that constant combines the interior with the exterior creating a very dynamic space and for a better feeling of the site sensations. That’s why, the south-east facade that is directly orientated to the main house has “bridge” balcony symbol of the crossing between the old and the new. All the people who are inside can look at the manor’s house through a frame which controls the space and the visibility , concentrating it on the main house. At the second floor a series of pillars which sustain the last slab confer control of the visibility in a descendent view as an contemporary interpretation for the house’s loggia.

The Hotel-Accommodation: For assuring all the facilities, I have proposed a building for accommodation, a small hotel having 1 basement and two upper levels. It was conceived to have rooms only on one way of the hall for orientating the rooms, the terraces, and the view to the main view, the manor’s house. It can accommodate up to 90 people at the same time in rooms for two or three people, each one of the rooms benefiting of it’s own bathroom and terrace.
Wooden finished, the hotel was meant to be a non invasive discrete presence as part of the ensemble and also to offer worm and friendly atmosphere.

The court: Conceived by the same principles of Mogosoaia and Potlogi the court lies on both sides of the symmetry ax, and contains the proposed buildings, and the guest receiving part of the manor’s house. For protection I have proposed a guardian room situated at the main gate, near the parking space, which is also the start of the inner pedestrian journey.

The garden: Made by the same principles that were applied for the time’s architecture (Mogosoaia and Potlogi examples) it’s main purpose is recreation, rest and contemplation and it is circulated through a pedestrian path, which travels around the pound. Thought it’s organically form it makes a strong contrast with the regular composing and the houses proportions giving it more value. This path interconnects different important parts of this garden. No matter if the visitors will chose to go for the beach and pool, opened air sculpture, theatre, tennis or relaxation on the lake summer house the controlled views and the direction perspectives accentuate the central element, the generator of this ensemble: the manor’s house.