TUB – Revitalization of central Bucharest, between necessity and BRAND

TUB (TransCentral Urban Bucharest) is a non-profit initiative that does not involve the local authorities, aiming to revitalize and promote central Bucharest. It intends to revitalize and develop the center of the city according to its present social and tourist needs.

TUB Bucharest represents a major orientation element and also an open debate on public space, pedestrian and bicycle itineraries, and loisir areas in the center of the capital.

One of the projects of TUB is to create the so-called Urban Room, the transposition of the most comfortable room of the house in a public space, accessible to all in the center of the city.

TUB also intends to create a BRAND for Bucharest, an important loisir area and a tourist attraction, by creating a long-term development strategy to support the future image of the city.

The project will involve a partnership between architects and architecture offices in Bucharest and it addresses public opinion, specialists, and authorities.

The main action of TUB Bucharest, presented during the Architecture Annual, consists of the creation of an alternative itinerary, completely separated from the actual driveways.

In this direction, the existent infrastructure is used (streets, squares, major constructive elements).

Some of the means adopted to reach these goals involve the identification of dysfunctional areas, their transformation with minimal means, the creation of new points of interest, and the implementation of a unitary orientation system in the itinerary.

TUB also intends to involve in this action public opinion, the administration, and economic agents.

In this context, the projected Urban Room is a community public space with activities defined in a clearly defined system. Inside this system, identity is a basic element in the generation of the Urban Room. More than that, identity is a mandatory factor for the coherence of urban space. 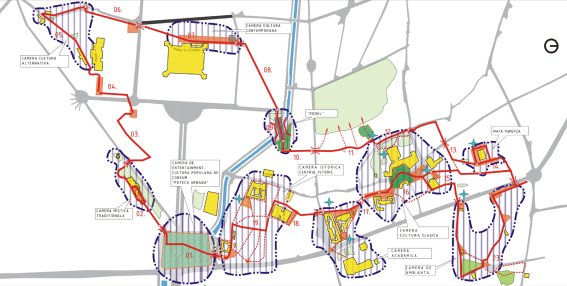