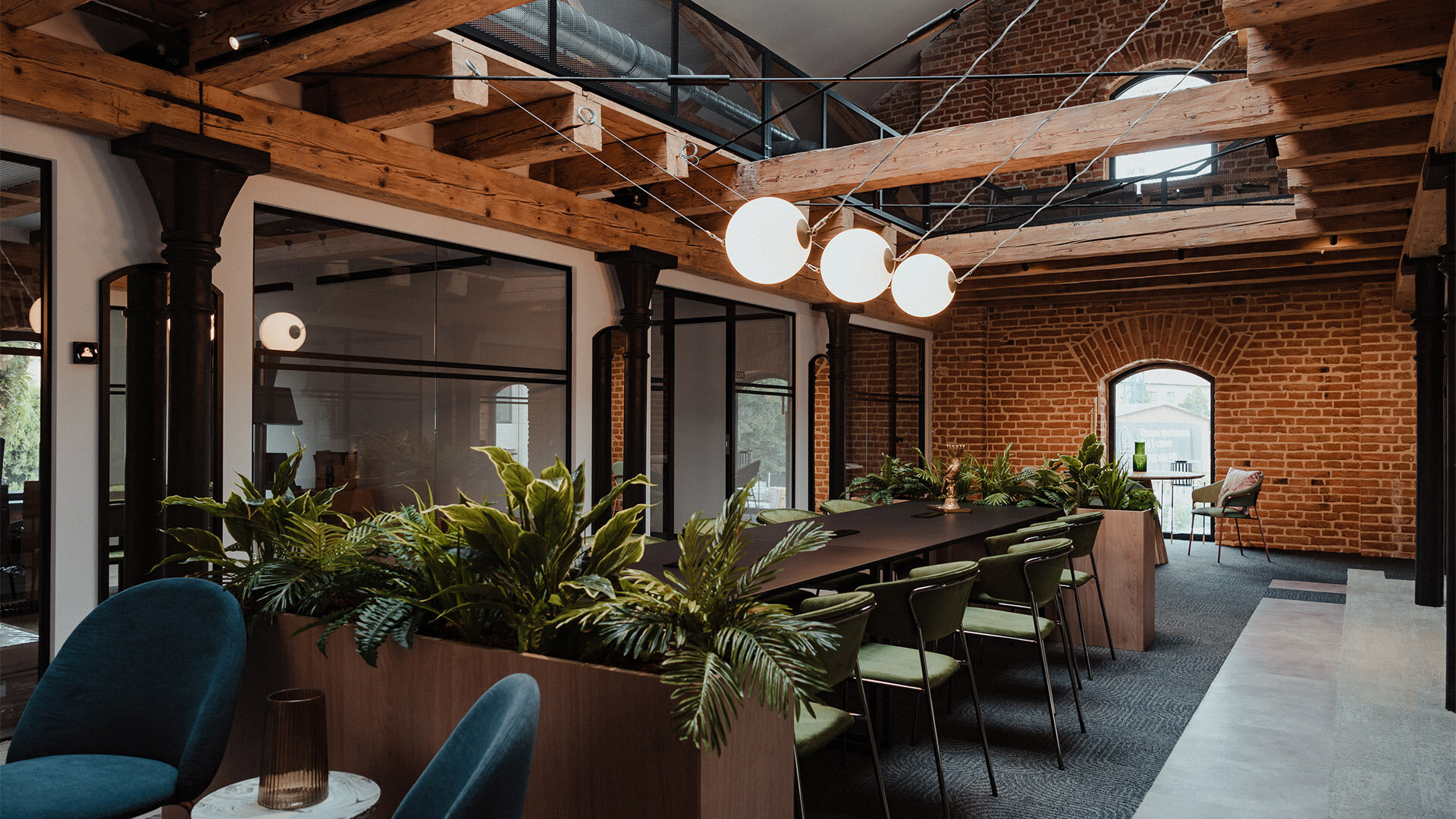 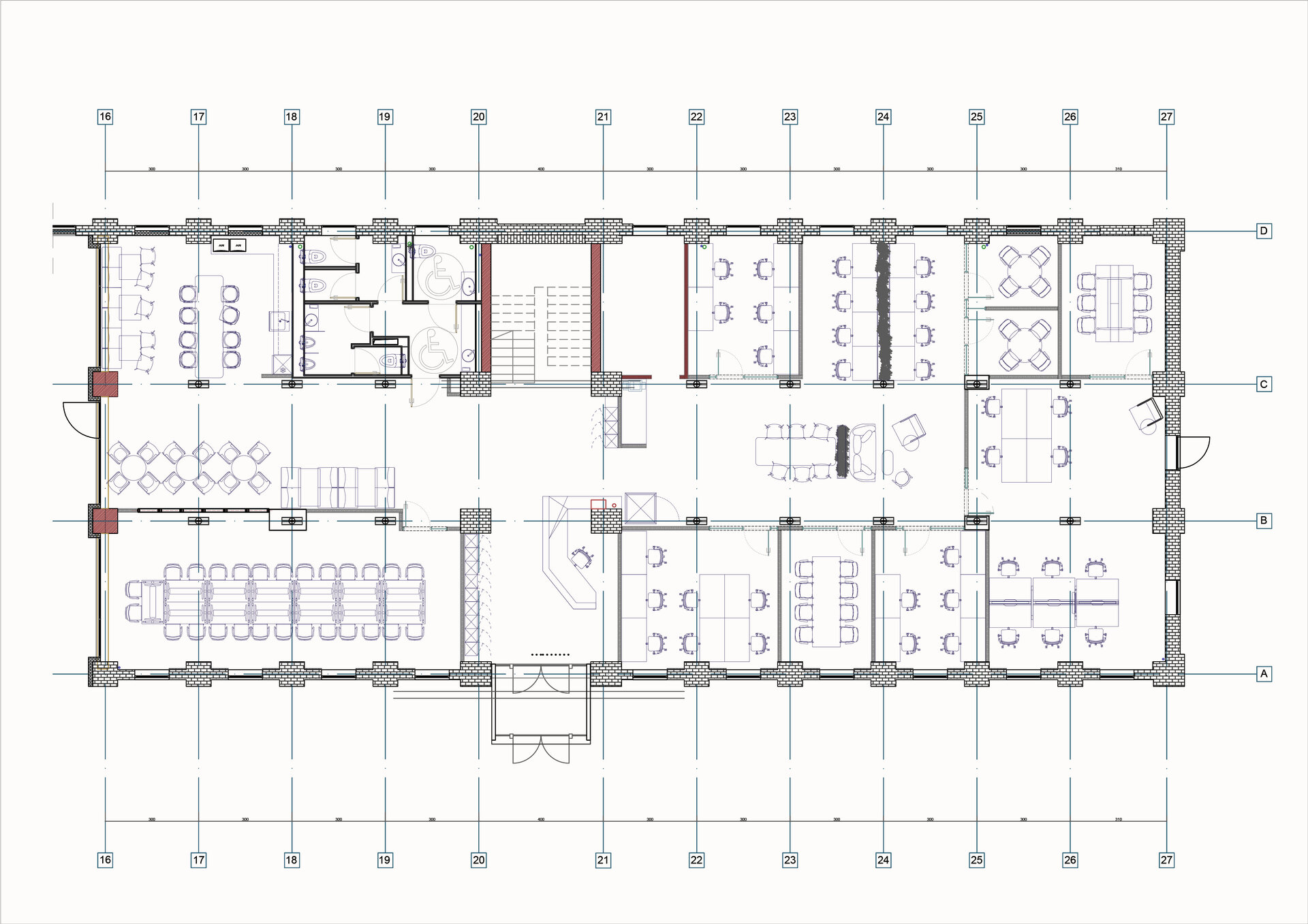 Under any drawing is a white paper. This is was our starting point in this adventure, which will be called Stables. Still, the building we were going to build was not at all simple. Rather an amalgam of history, with a first intervention in the cast iron pillars marked in 1885, a rehabilitated brick cladding and new stairs of apparent concrete.
The beginning was difficult. At the beginning, the white paper is filled with ideas about the future space, about the way it is presented and how it works, but the general concept is difficult to outline. Creating a co-working space was not enough for the team. The design theme, although seemingly clear, contained all sorts of expressions that began with "the most". It was clear to us that we had to think everything outside the classical limits to get the desired result. Thus, was born the idea of community.

And we continued to add on paper sketches, ideas, models and details that would preserve the unique character of the building, but to capitalize on the community and future tenants. The human presence becomes the main core of all decisions. All spaces evoke and encourage human interaction, the desire to communicate and belonging to a micro-society.
The decision, perhaps unexpected, of adopting the art-deco style marked the starting line in the design of the project. All the characteristics of this current that dominated a long period of the twentieth century, offered the sensations we are looking for in the interpretation of space. From the positioning of the walls and the repetitiveness characteristic of the building itself, to the details of the imagined ornaments led to the shaping of the concept, this sinuous line being the foundation of the project.

The geometry of the building restricted the functional organization of the space within certain limits, but at the same time it allowed the preservation of a clearly defined contour between private spaces and public spaces. On the ground floor, the reception, located in the axis of the building, allows an easy to perceive circulation. The wardrobe and storage areas outline the space through vertical, repetitive elements and guide the observer to the following spaces. The left side of the building is occupied by a conference center with four possibilities of spatial organization, by transferring a removable wall, thus managing to integrate the work-café area in the conference area. Different types of seating are possible, from lounge sofas to bar and high stool chairs. The conference center is equipped with folding tables, which can be moved according to needs. On the right side of the building we find three closed offices, two small meeting rooms, an open space work area, a hot-desking area and the private space of the COS company.
Going upstairs, the staircase gives the observer a bohemian passage, the mirrors that define its corners dominating the presence and bring the observer to the forefront. The lobby needed for fire safety reasons hosts an art gallery of young local artists, thus promoting the community. The two sides of the building were similarly organized in composition. On the long sides of the building there are private offices, with occupancy between two and seven people, and centrally distributed meeting areas of different shapes and sizes and hot-desking areas. In the axis of the stairs was organized an area a little protected from heavy traffic, thus hosting individual work rooms, teamwork areas and print area. The valuable elements of the building were highlighted and actively participate in shaping the whole.

The interventions on the building were made through specific details for each area, with the desire to highlight the essence of the building. Hidden works support much of the good functionality of the entire space and integrate the necessary technology. The architectural details complete the existing materials (brick, wood, cast iron) and together form spaces dedicated to the various activities necessary in a co-working space: meeting rooms, closed offices, hot desking, etc.
The integration of art-deco inspiration elements offers the unique character of the space, many of them being designed and executed especially for this space. Mirrors are the key element in obtaining expansion effects. They actively participate in the feeling of discovery in space, especially in traffic intersections. The location of the mirrors behind the cast iron pillars extends the limits of the common space, located in the longitudinal axis of the building and gives continuity to the whole room. The crossing points are highlighted by small decorative accents that bring harmony in the general concept of art-deco inspiration. The luminaires support the same art-deco direction, combining the elegance and luxury offered by the current of the twentieth century with the modern and functional lines of corporate design.
Although a contemporary, functional and technological space to meet the widest needs of users, Stables evokes elegance and refinement. The imprint of the traditional building, with a strong history, wooden beams and intense colored bricks, is combined with geometric shapes, stylized and repeated, vegetal prints and abstract symbols, pieces of furniture with rounded shapes and combinations of pastel colors and elegant textures. By its simple existence, Stables takes the note of a museum. A functional museum that arouses the most hidden pleasures of the observer. 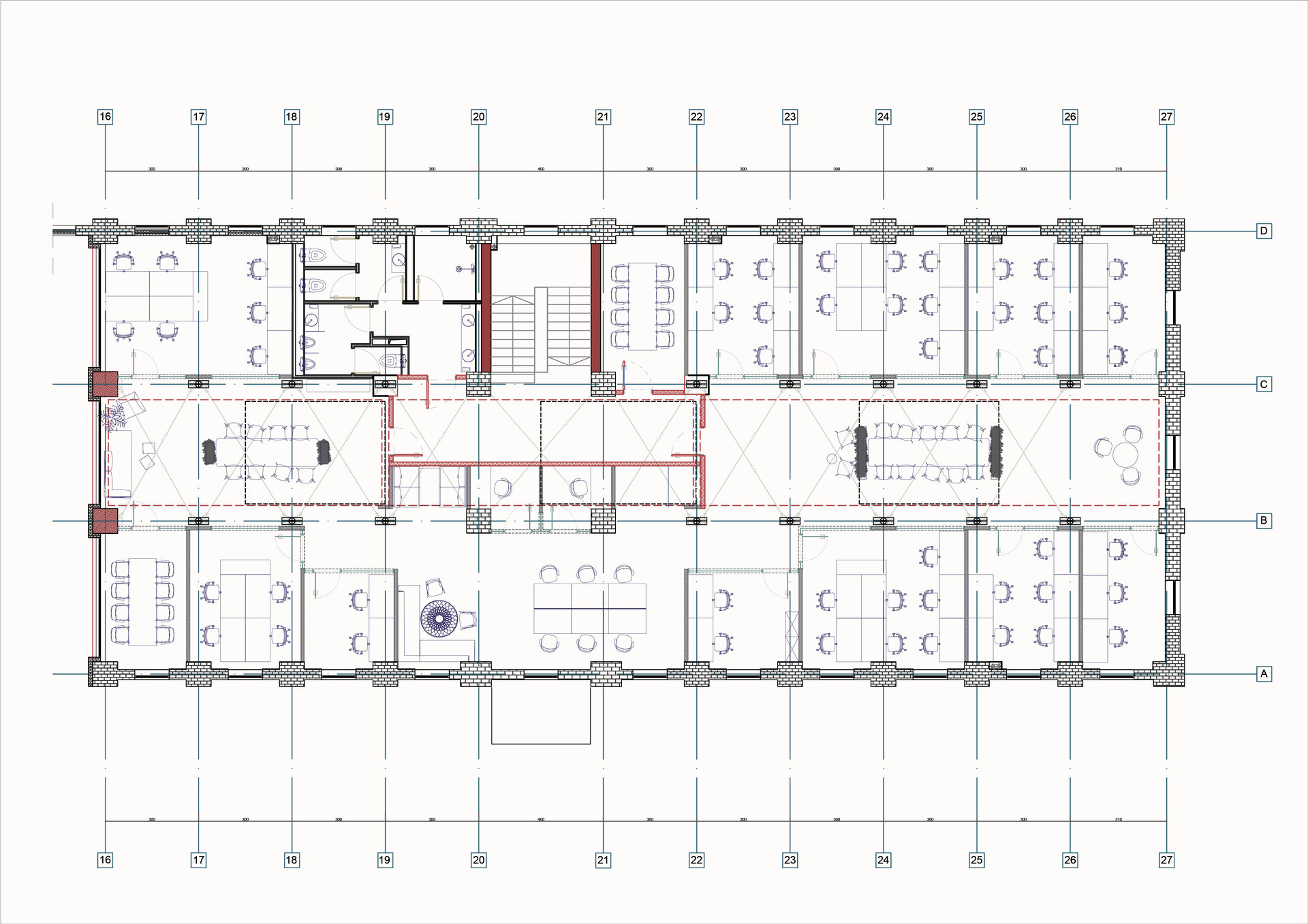 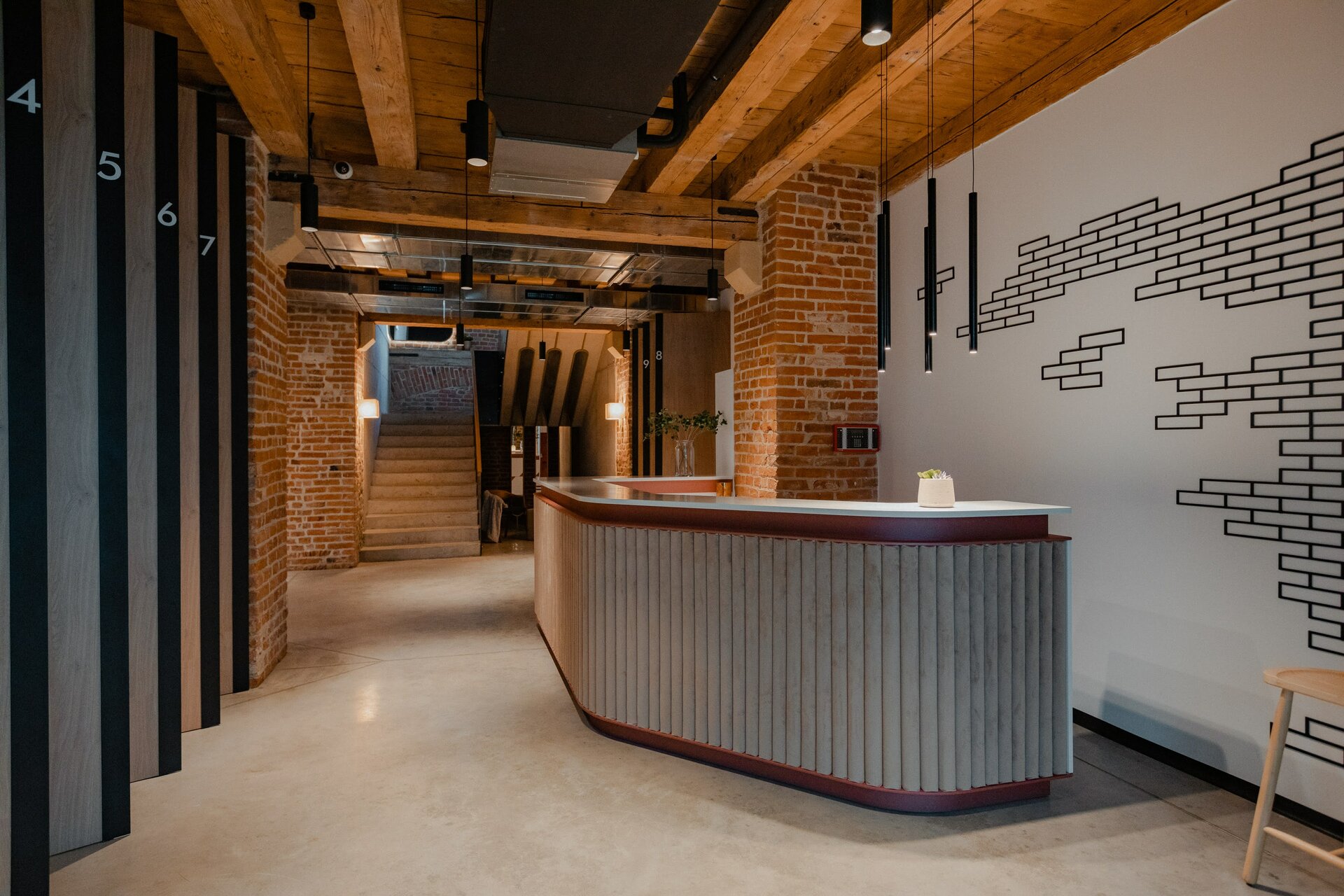 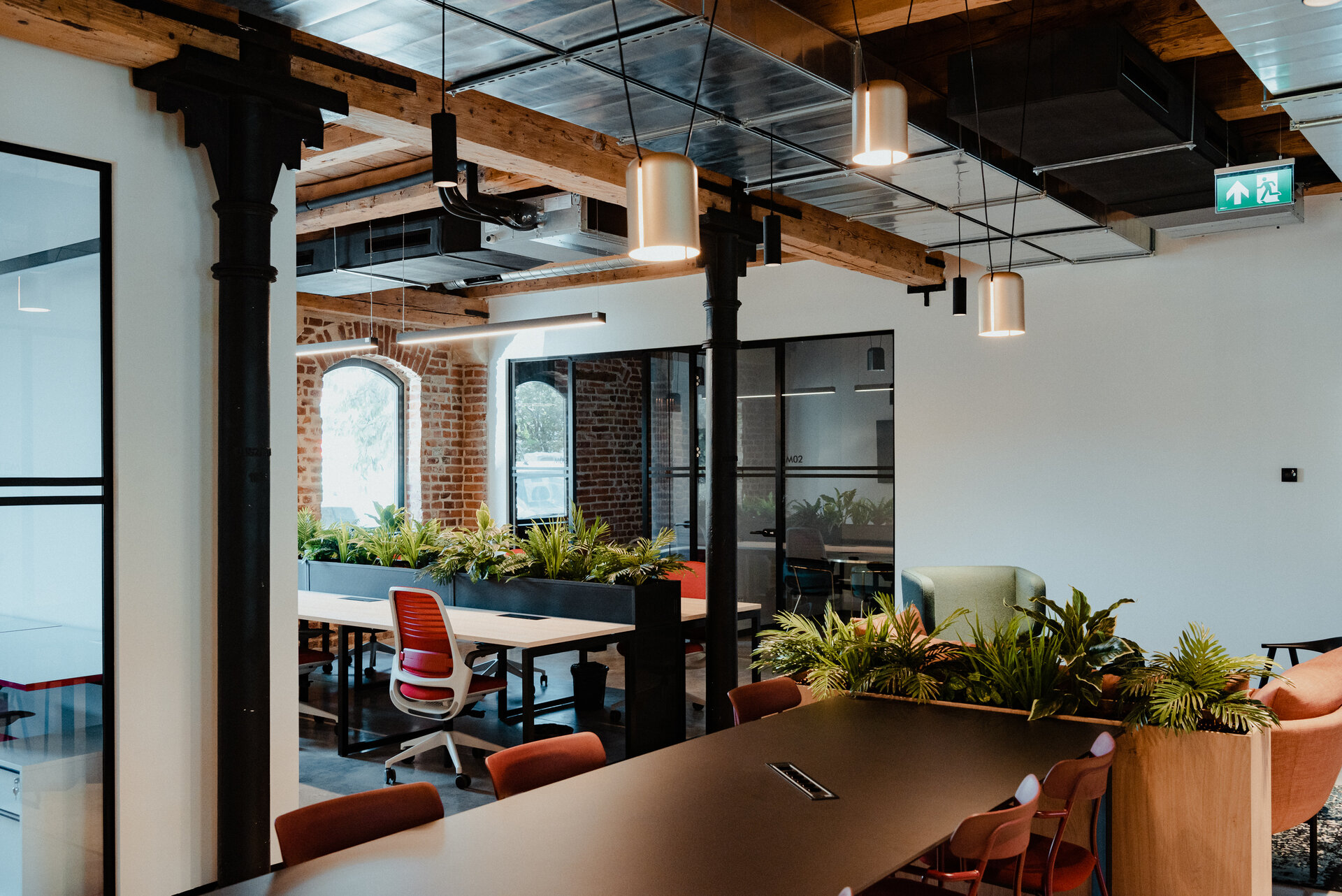 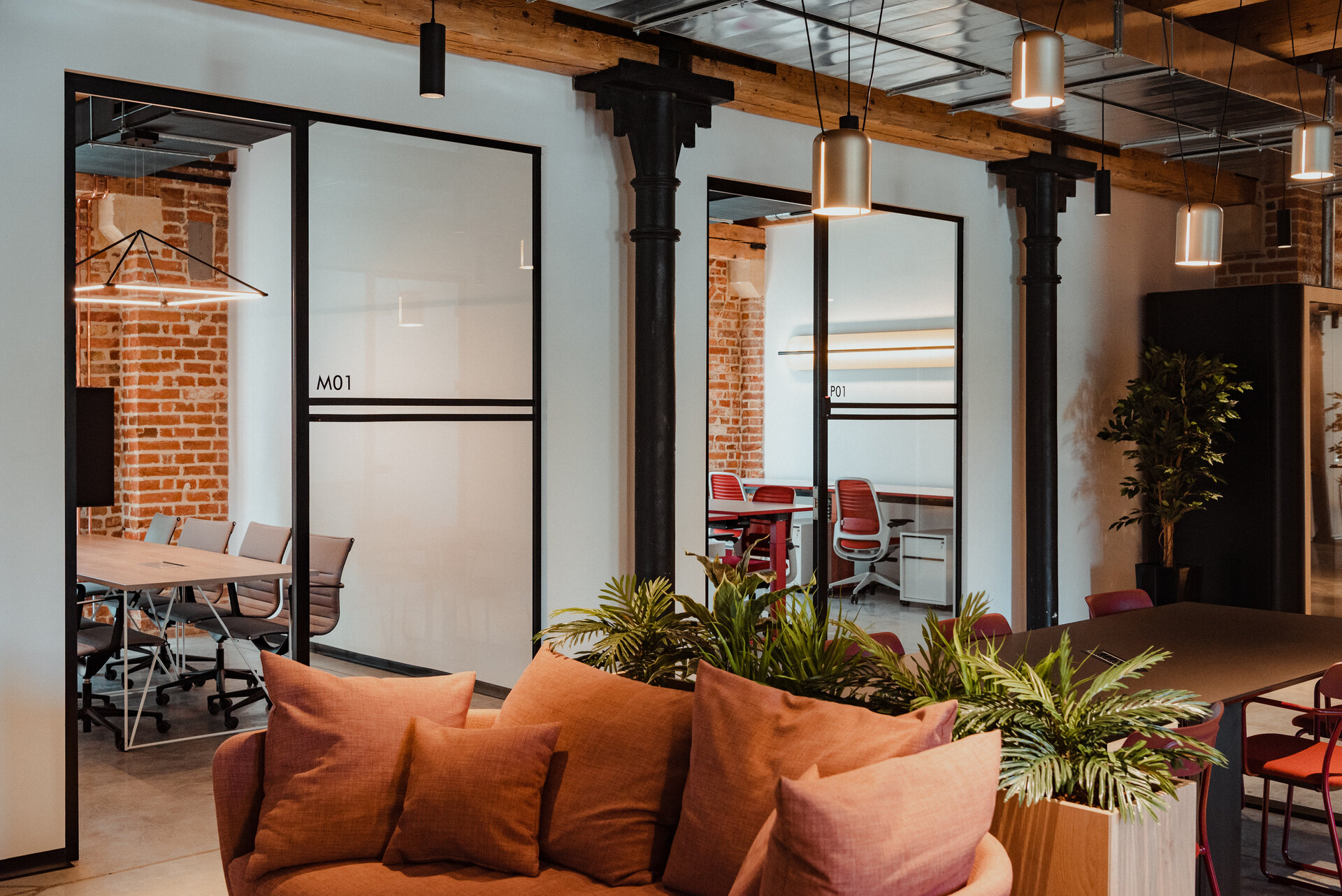 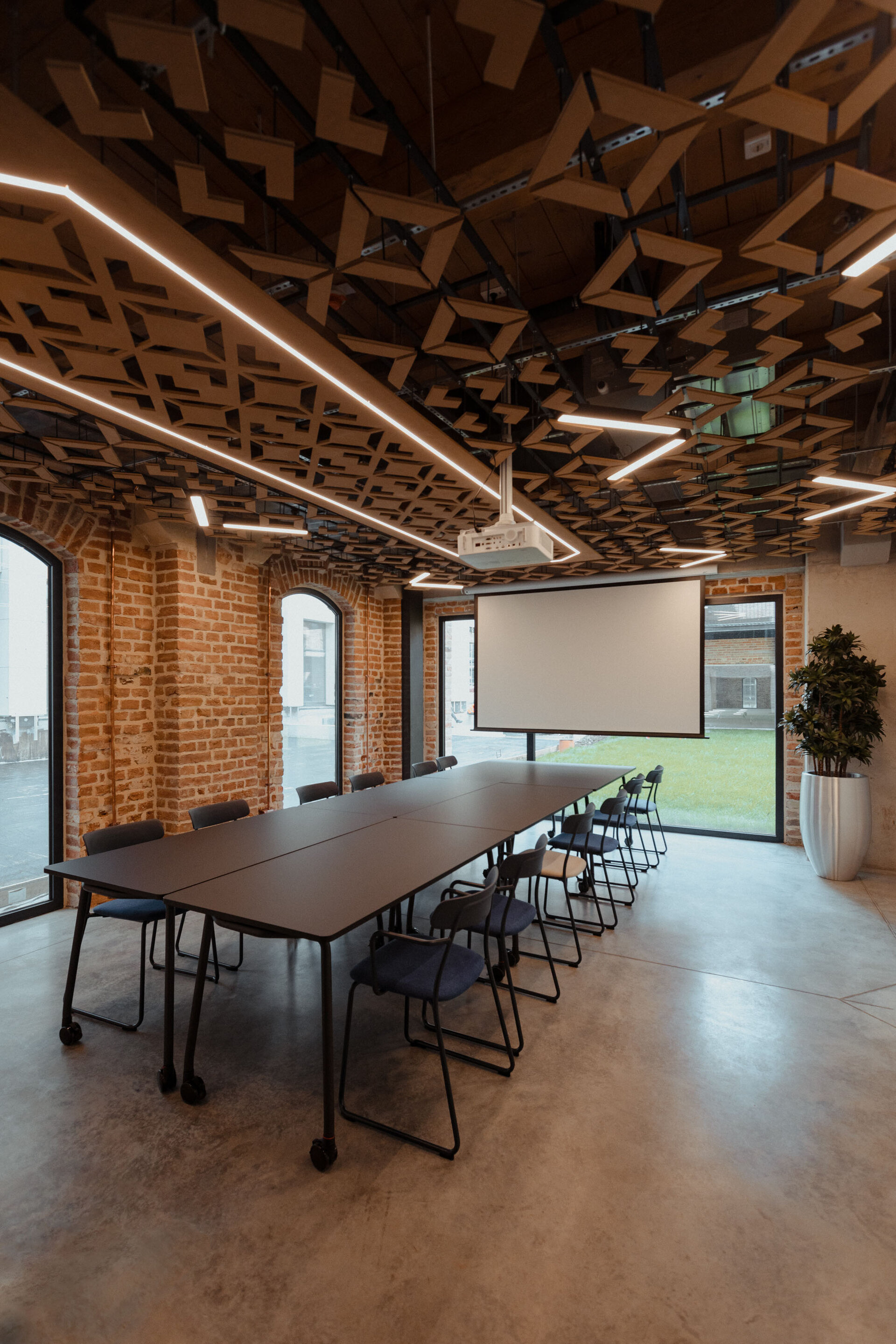 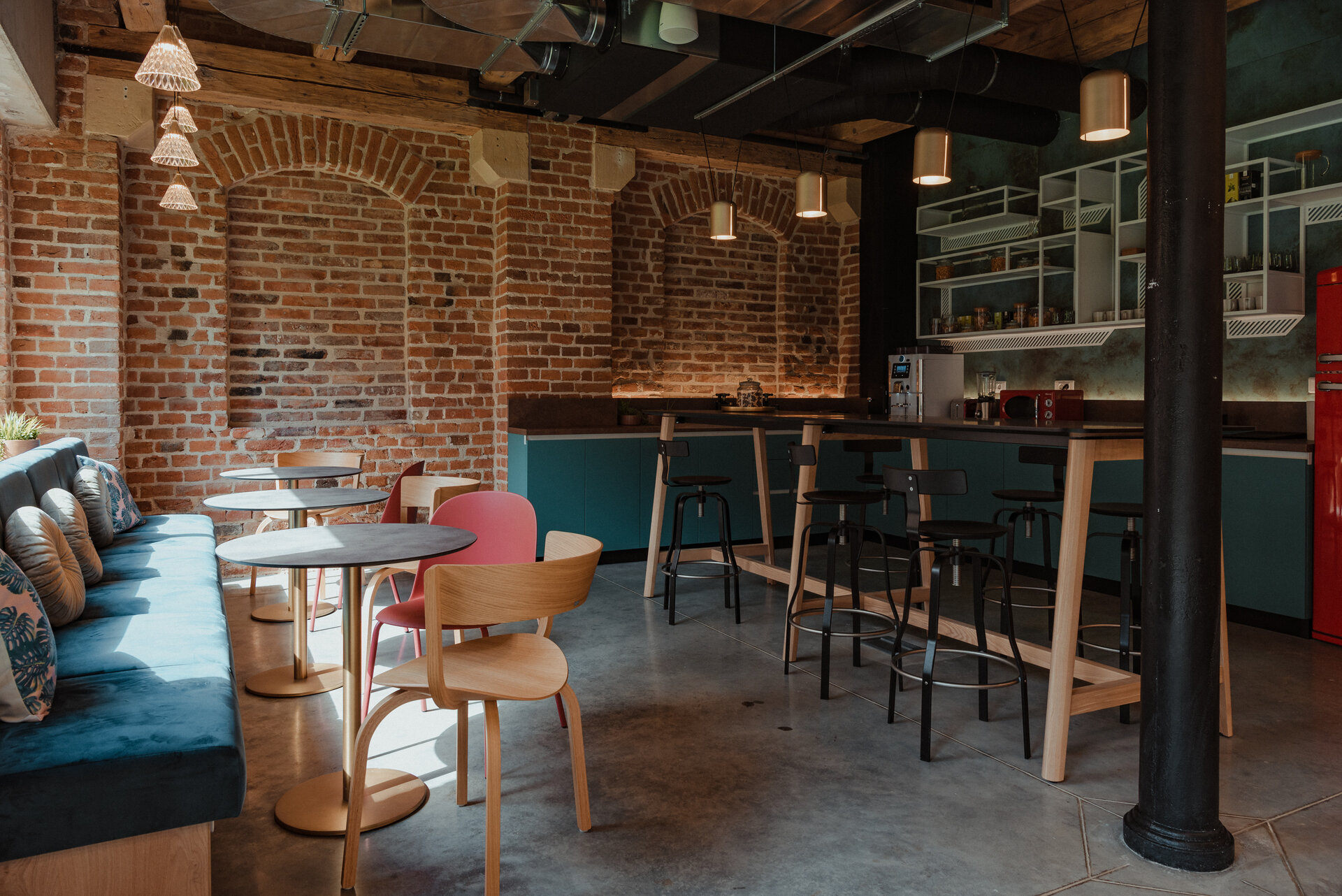 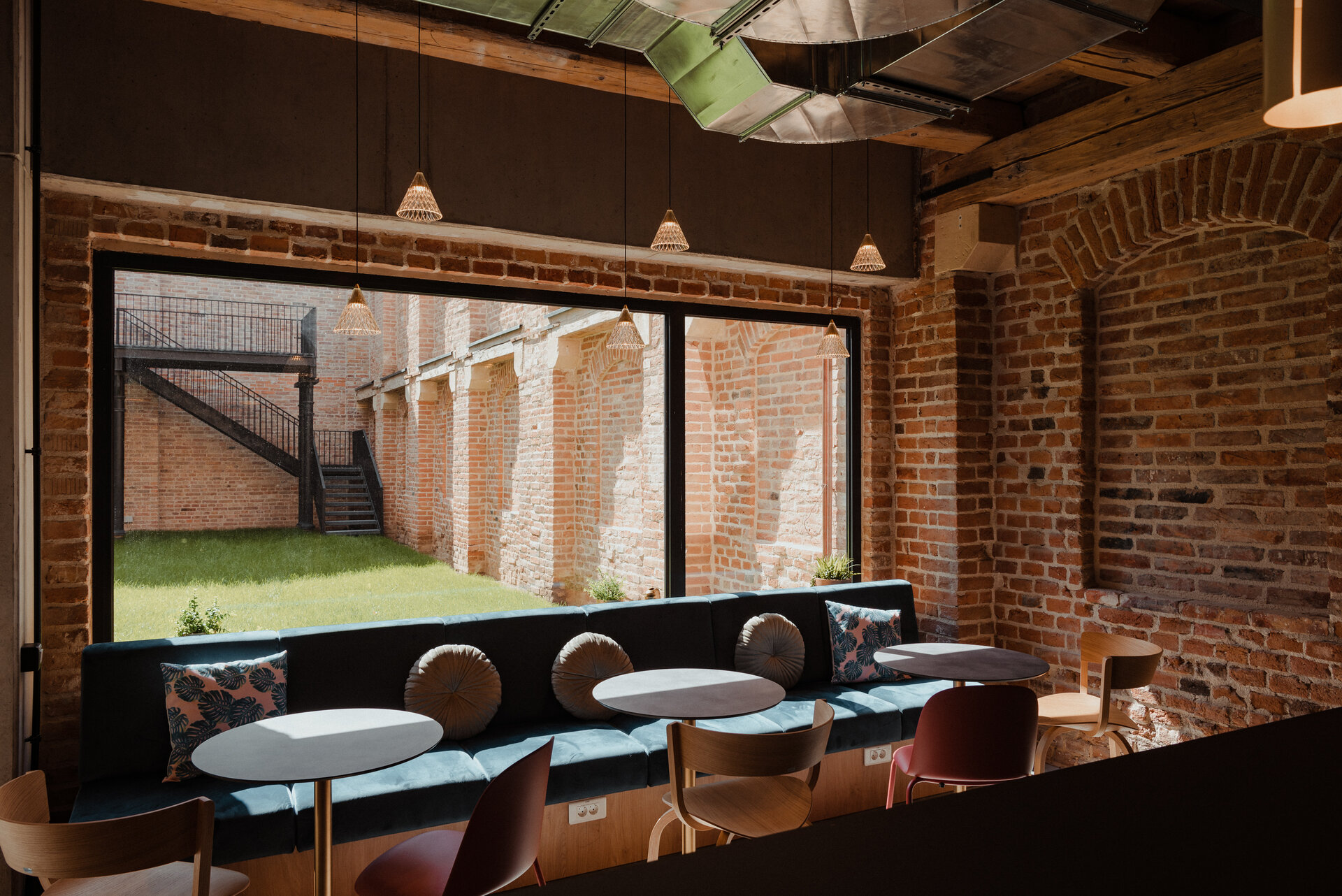 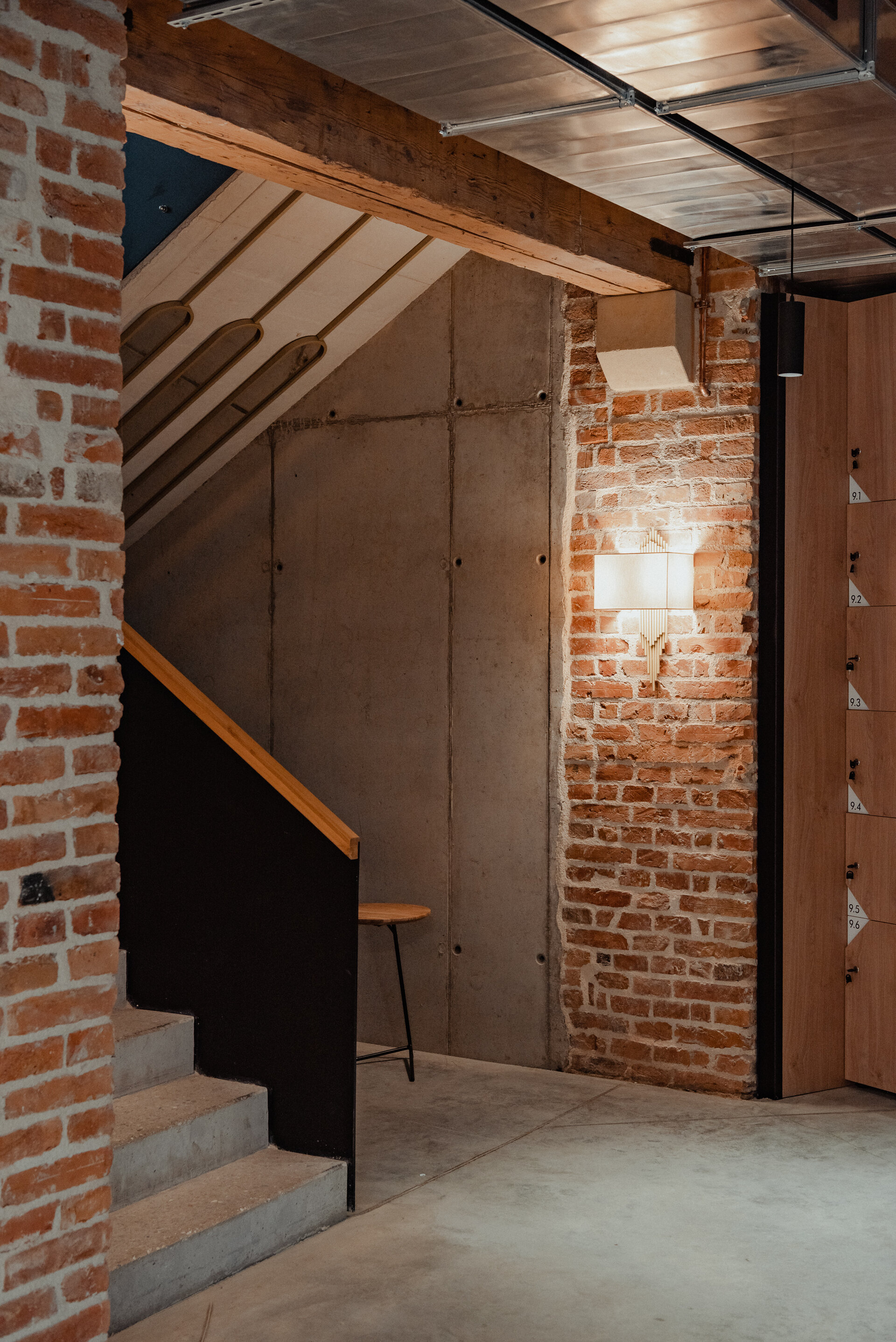 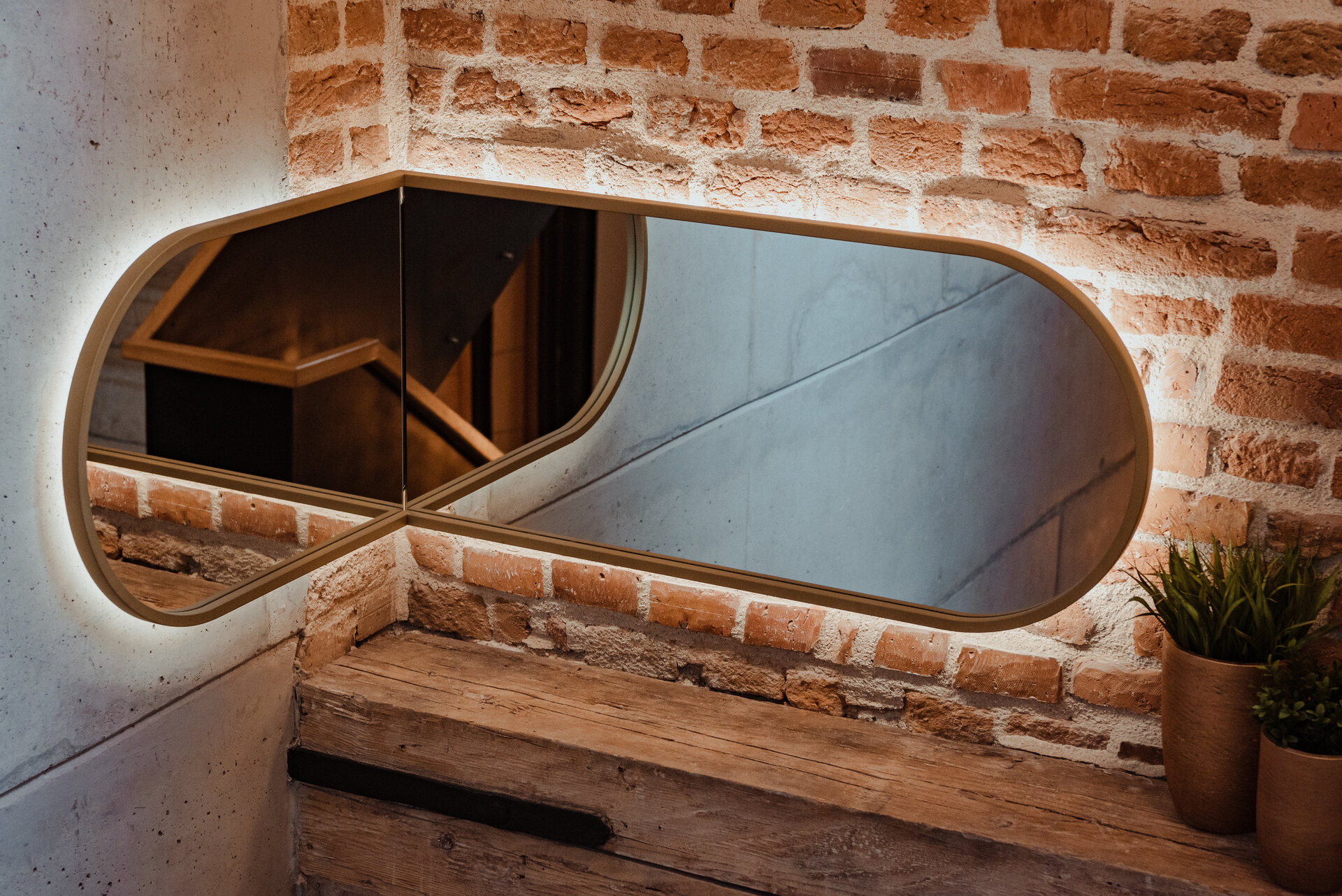 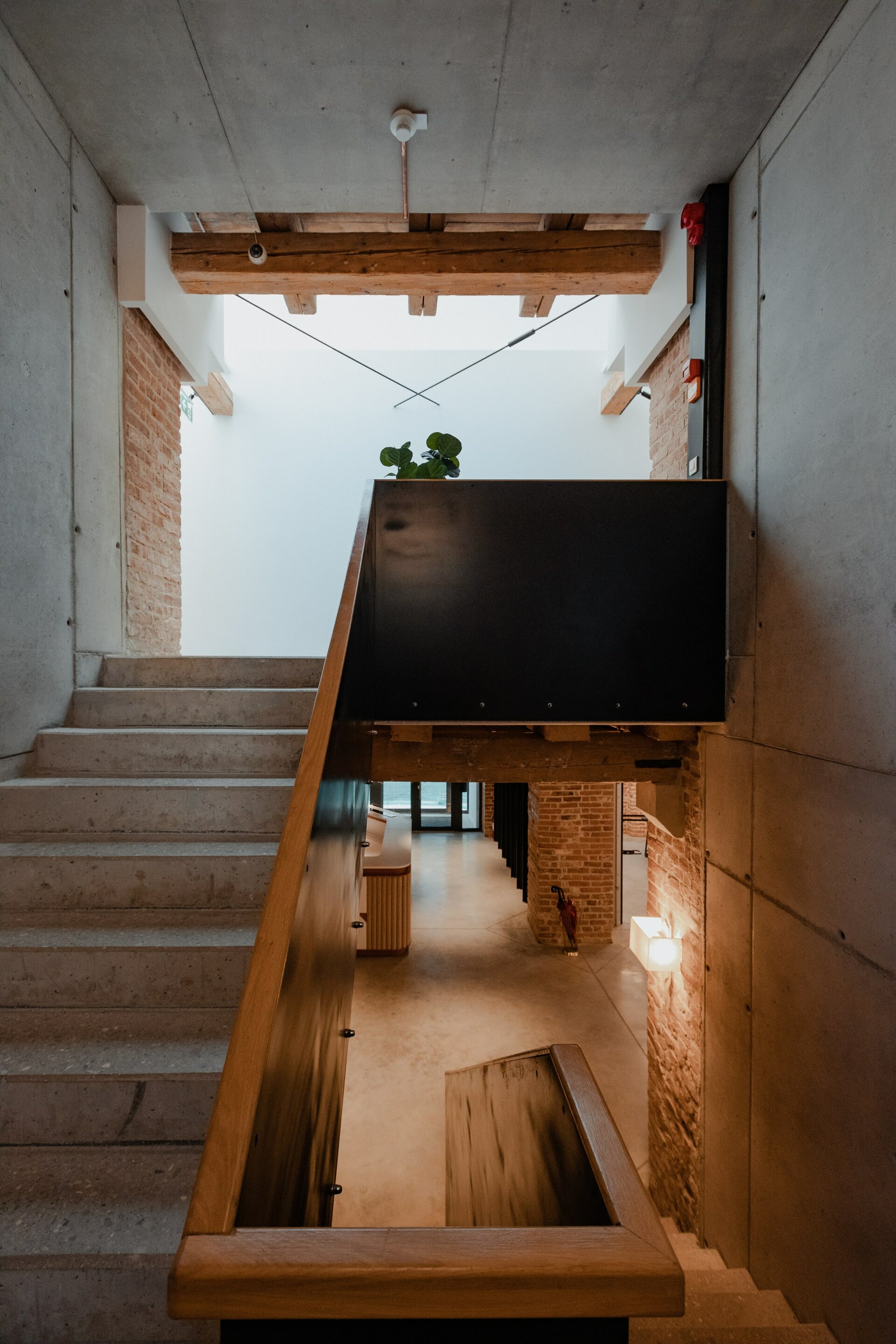 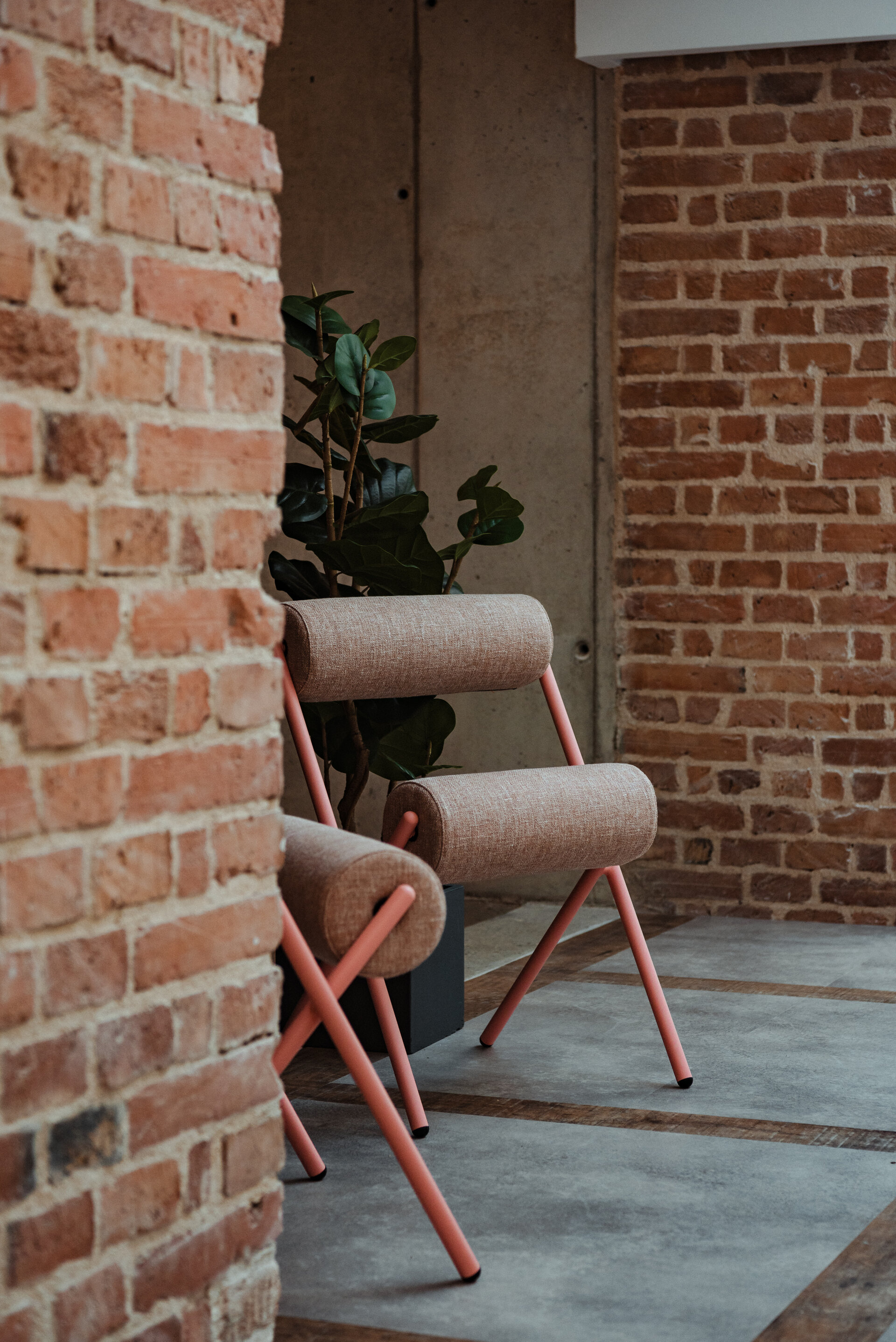 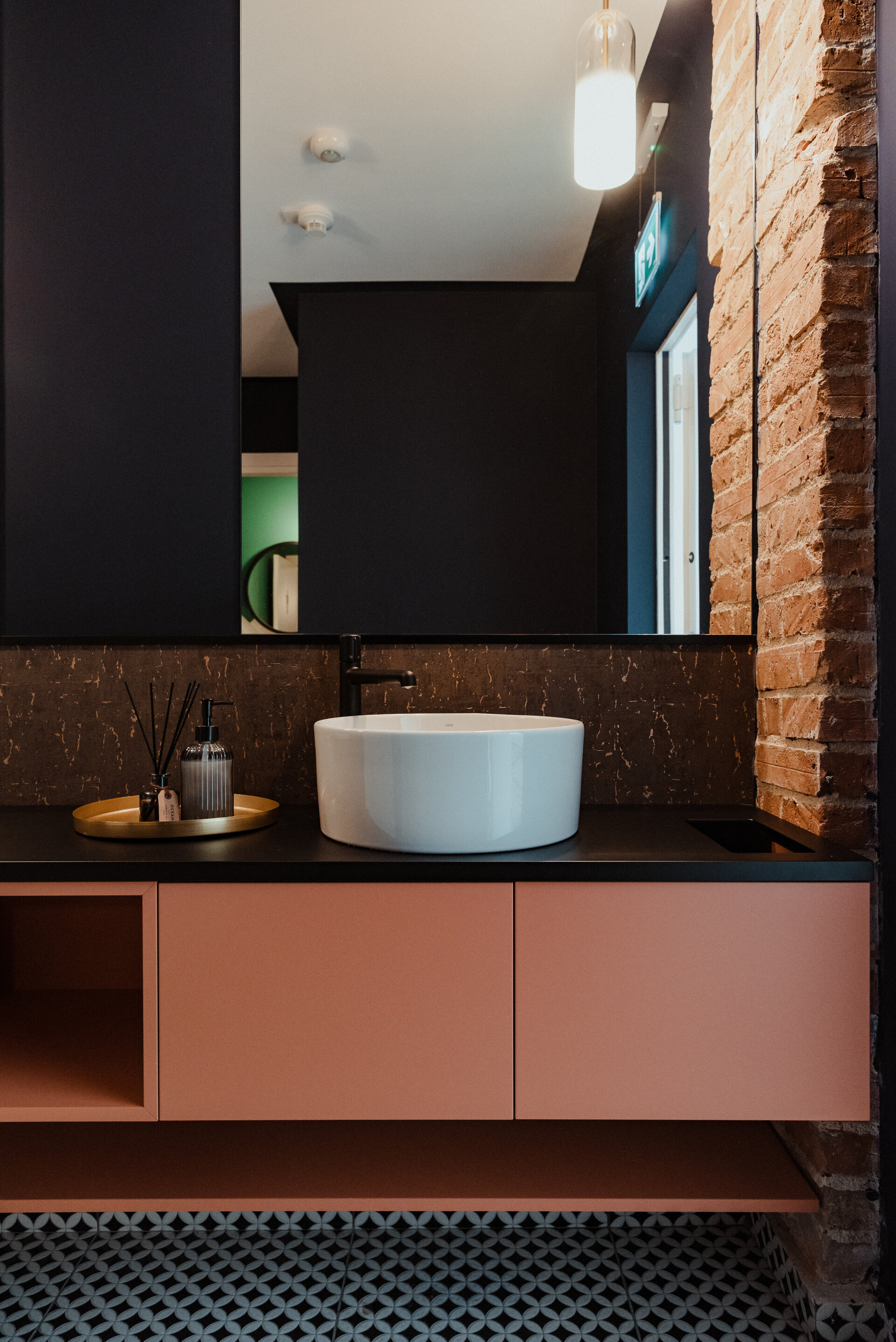 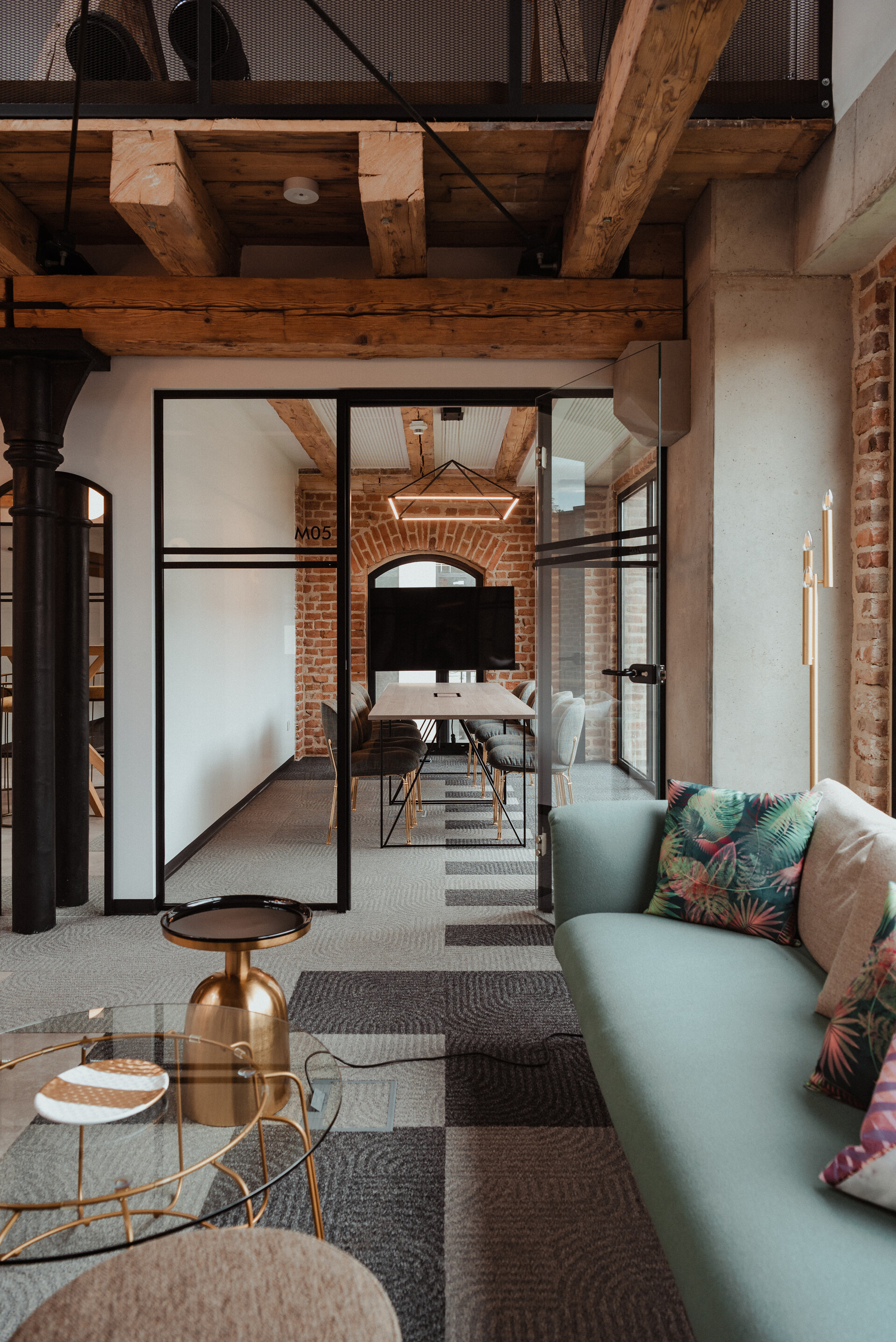 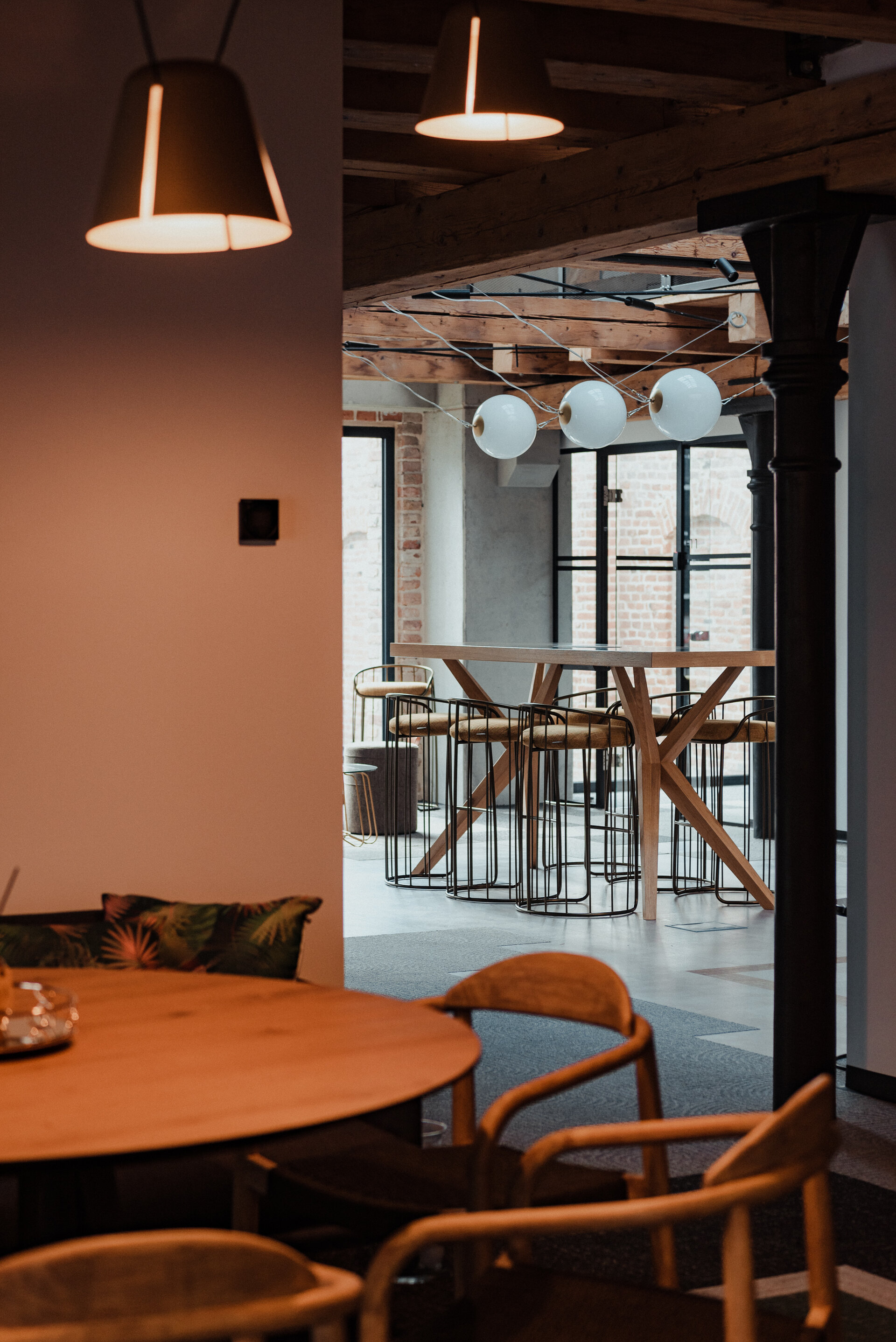 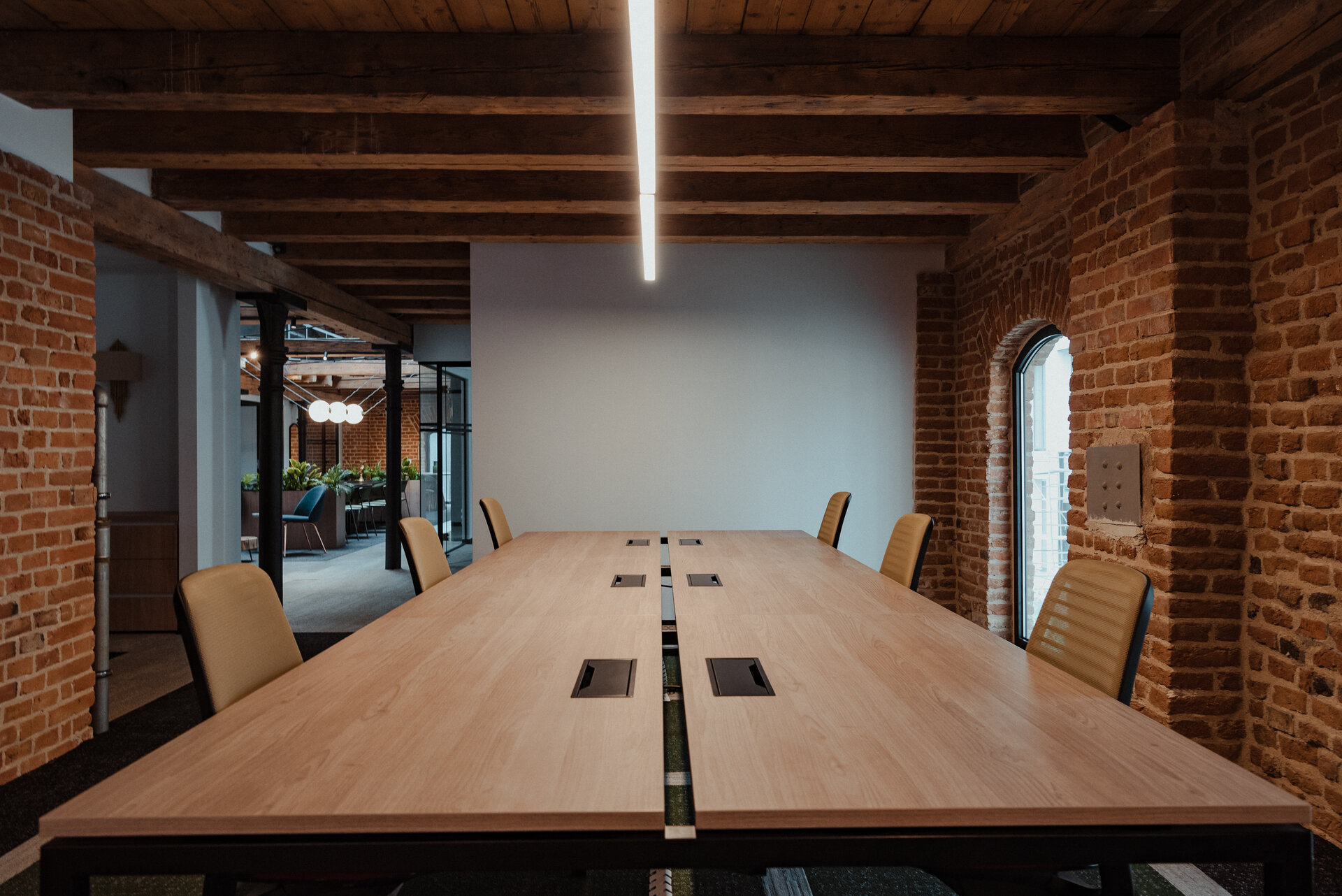 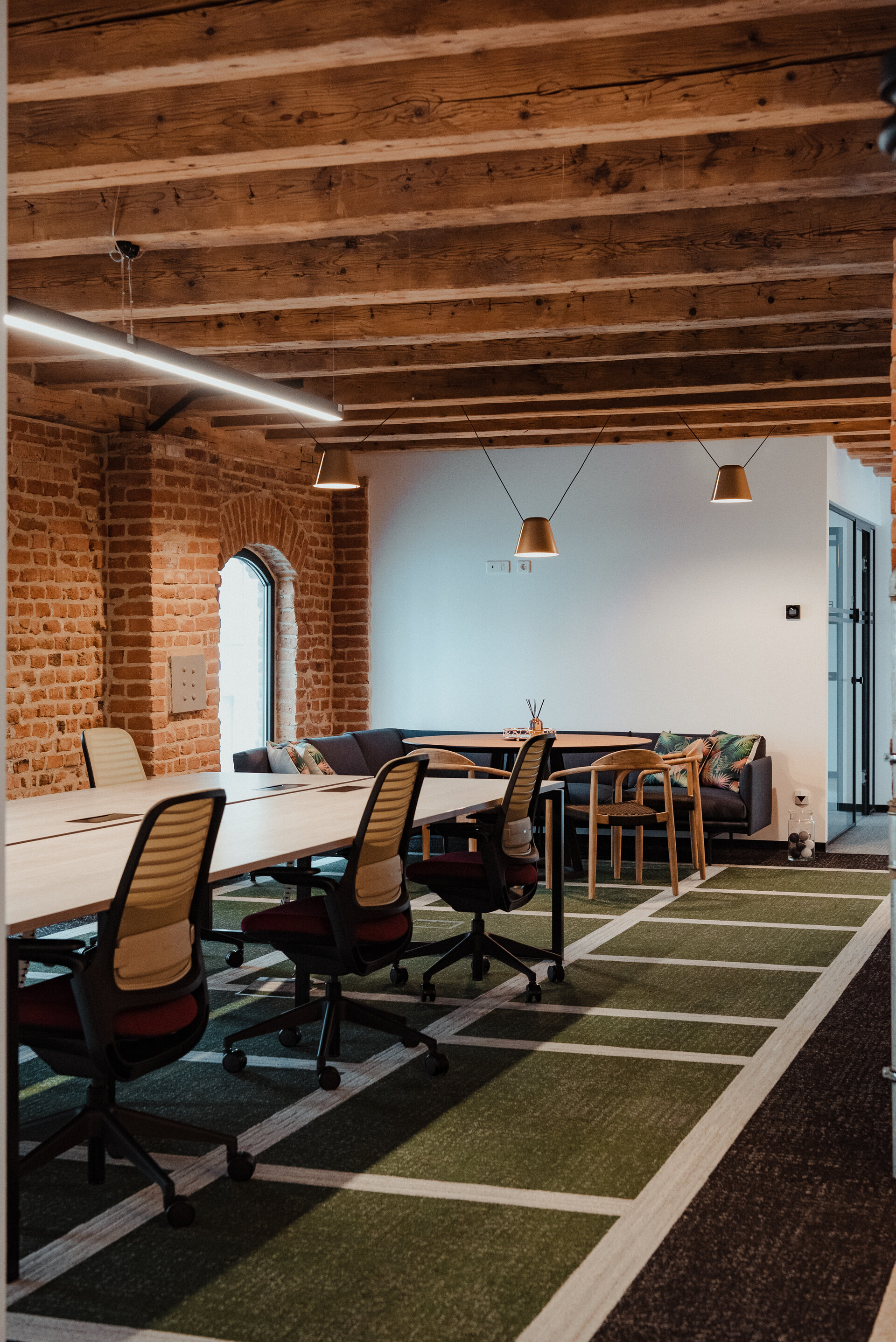 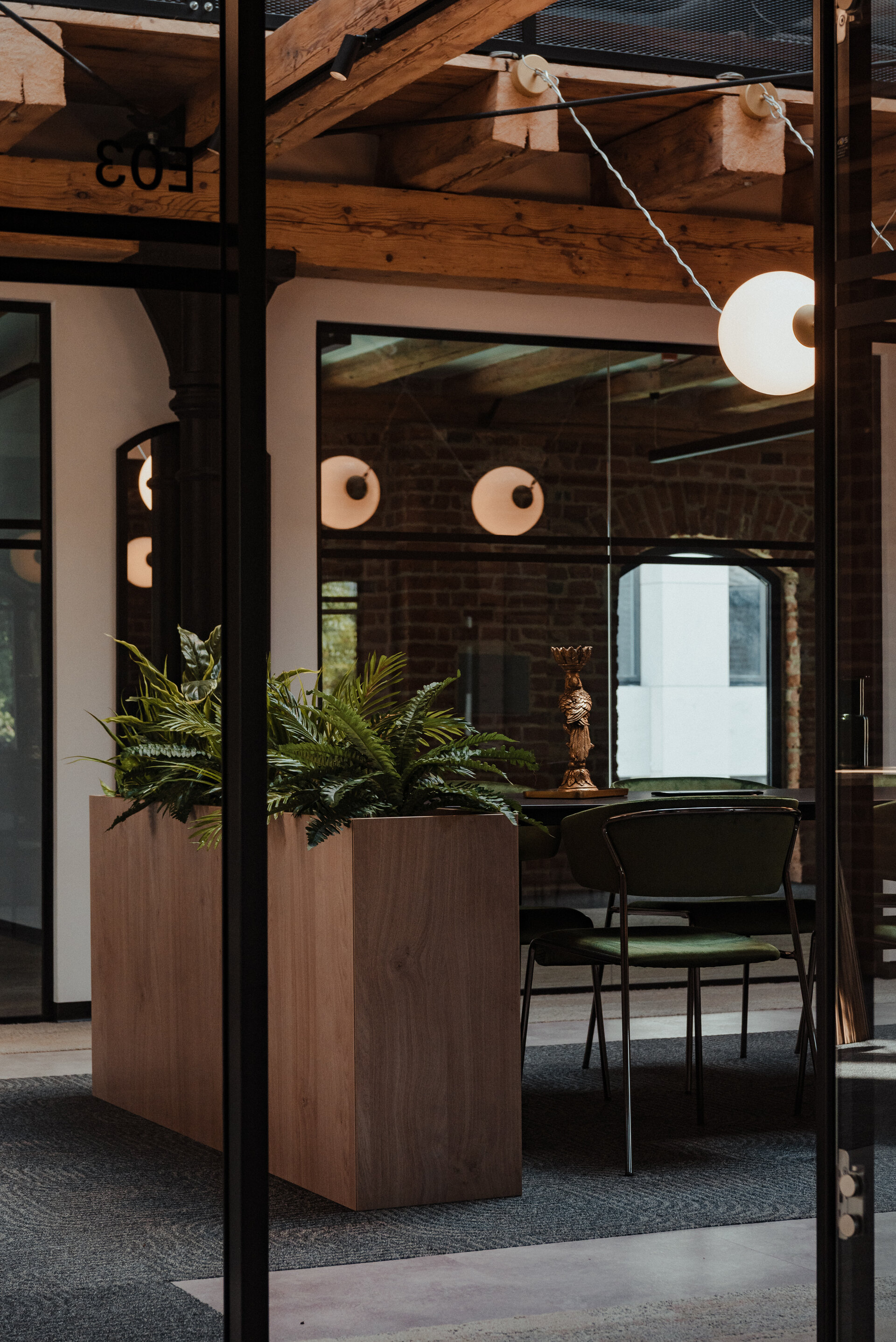 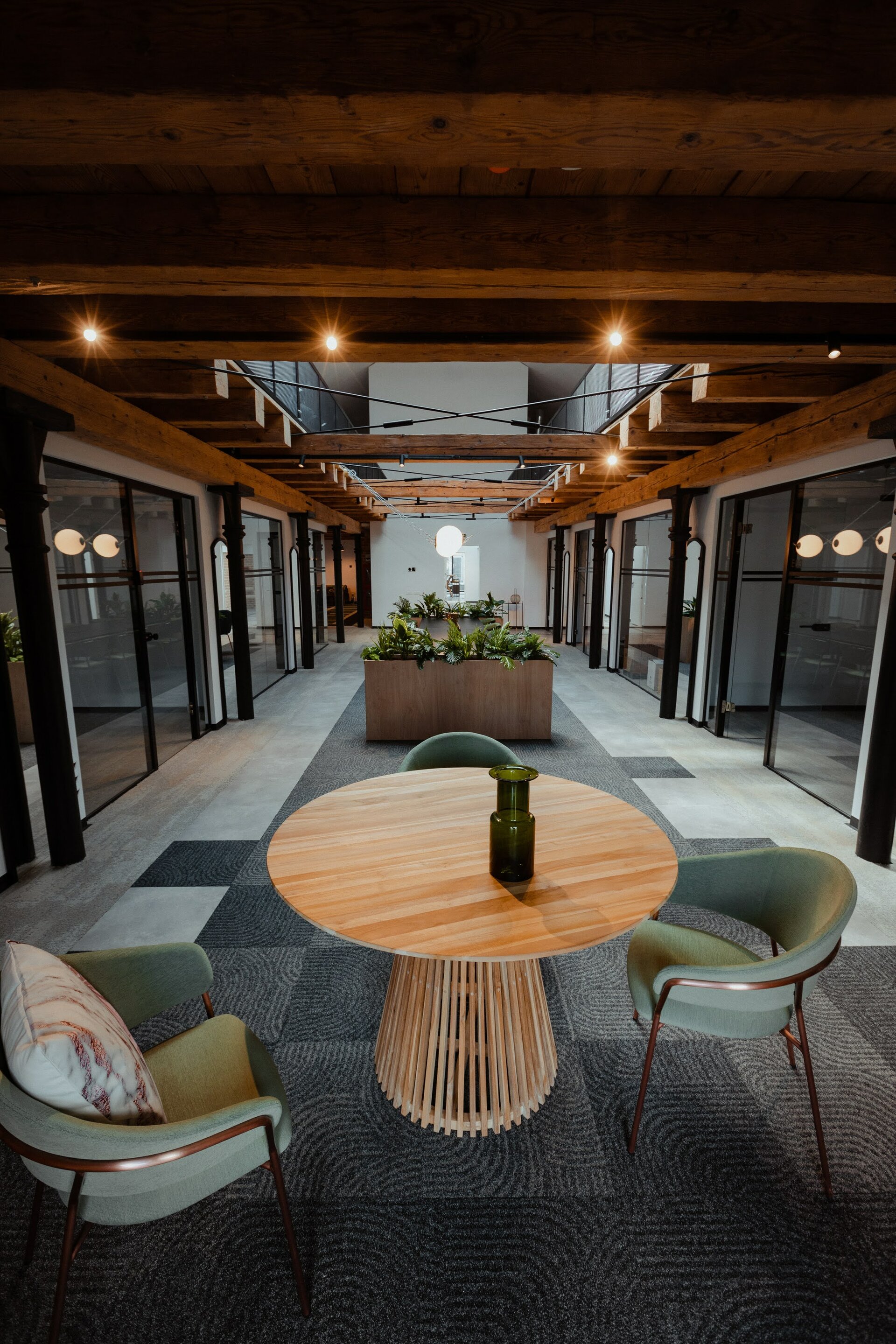 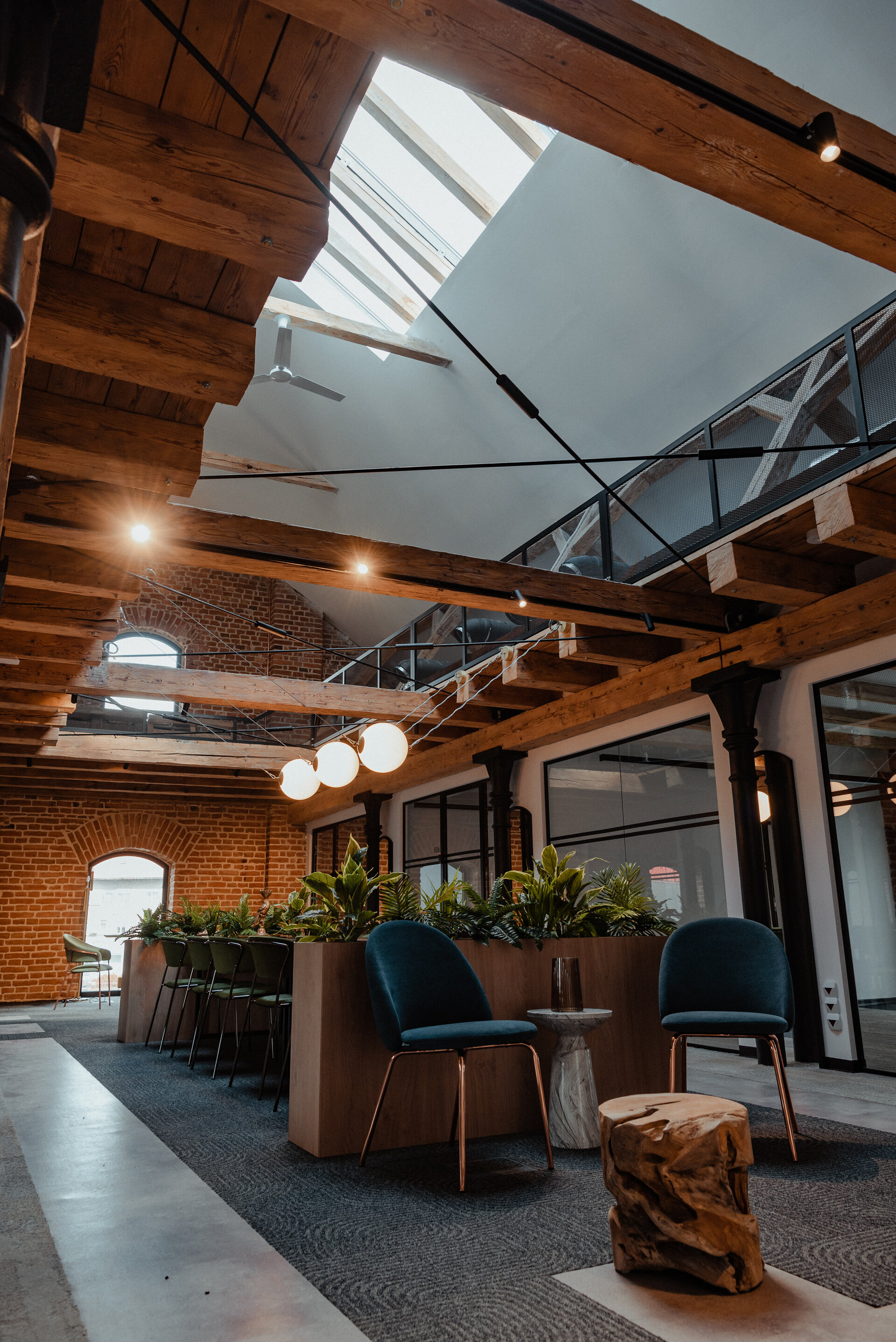