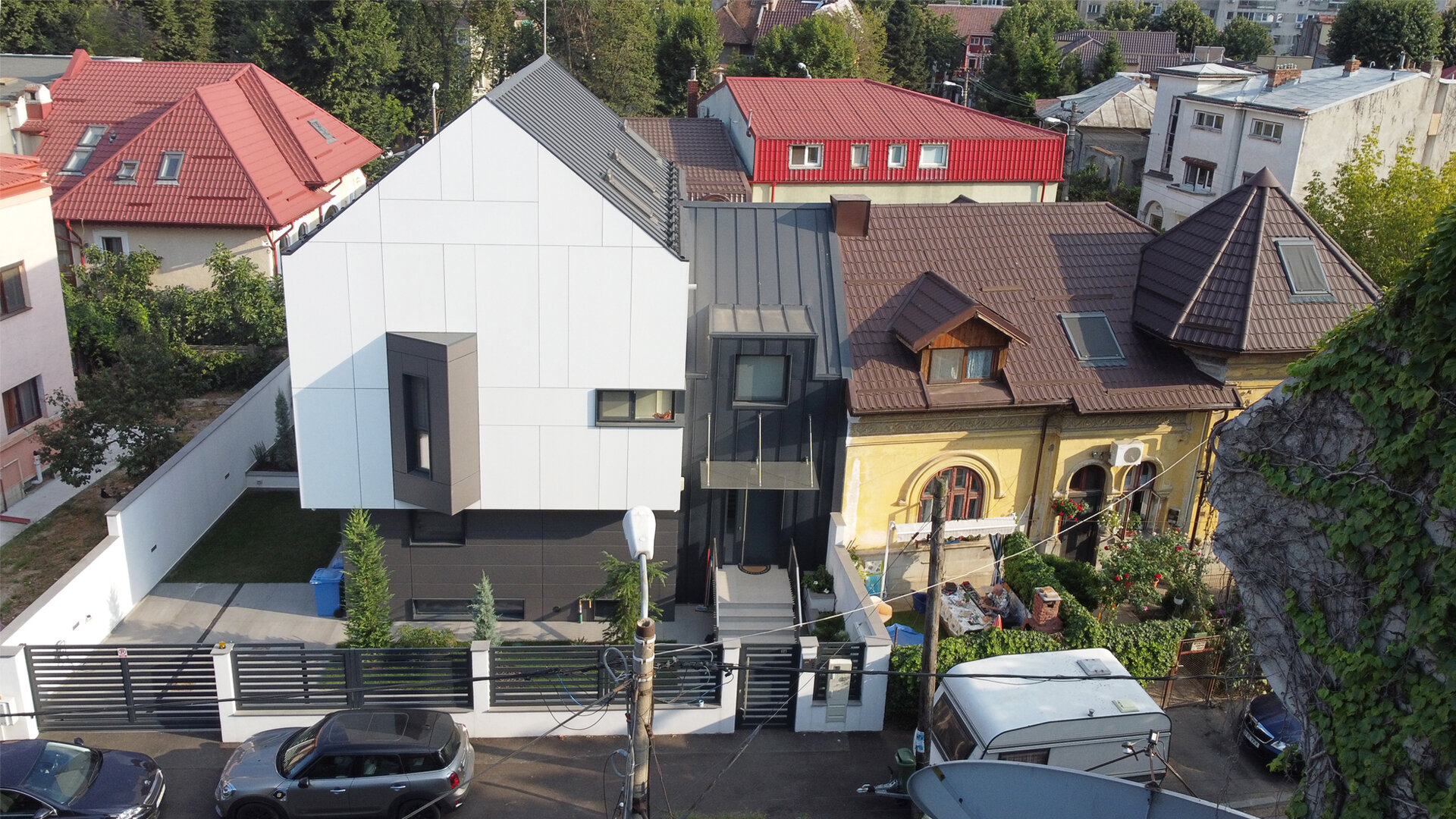 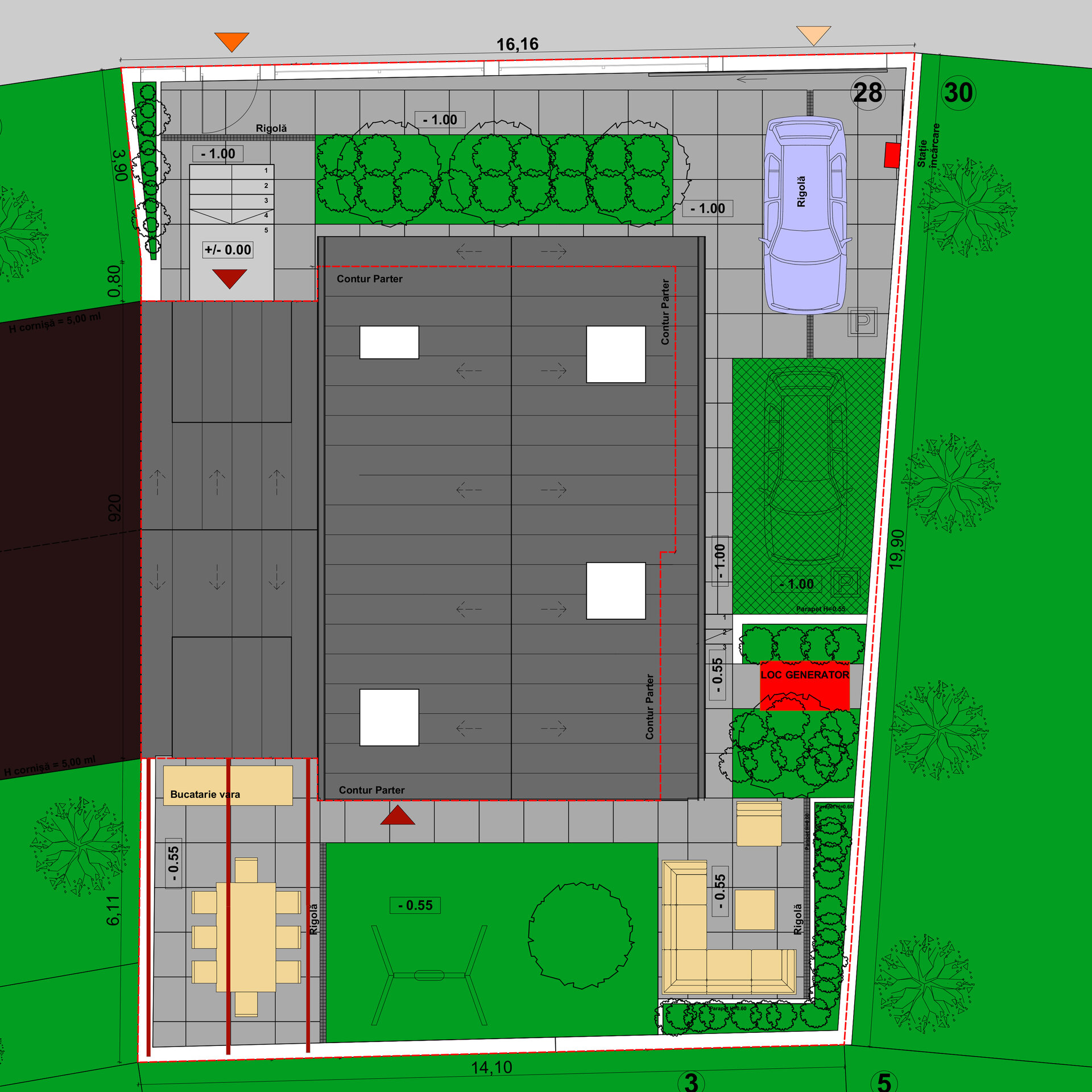 The building has the function of individual housing, on four levels, respectively DS + P + 1 + M, hosting a family with 4 members - 2 adults and 2 children.
The attitude towards the neighborhoods was a clear one: the volumetric takeover (cornice / ridge) of the neighboring blind wall and, once withdrawn from it, the raising with another level above its level. At the same time, we tried a contemporary approach (removal of eaves, hidden drain pipes, ventilated facade etc.), in a neutral chromatic interpretation (white / gray).
The volumetric solution also has the advantage of proposing, for both children, attic spaces, at different levels.
Another element that significantly influenced the solution is the existence of the semi-basement, with an important package of steps at the entrance, an element that we did not want to repeat to the backyard. Hence the decision to raise the backyard by 45cm, lowering - at the same time - (with three steps) the livingroom, thus resulting an excellent interior-exterior relationship to the courtyard.
On the ground floor we find a windfang and a staircase to the semi-basement (element that connects only these two levels) + an area of annexes (storage and bathroom) - all in the small bay from neighboring blind wall, then we enter the kitchen-dining room area, in direct open relationship with the livingroom.
Going down to the semi-basement, we identify an area of annexes (storage, CT, etc.), as well as an office in relation to a library (placed under the lowered living room, it has no windows, benefiting from the contribution of a glass floor on the ground floor ).
Upstairs we identify the master bedroom with the dressing room and the master bathroom, as well as the room of one of the children with double orientation, attic space, with a separation suggested by furniture between the day area and the sleeping area, with its own bathroom.
In the attic we can discover a laundry / dryer and the space of the second child, made in the same way, with a separation suggested by furniture between the day area and the sleeping area, with its own bathroom. 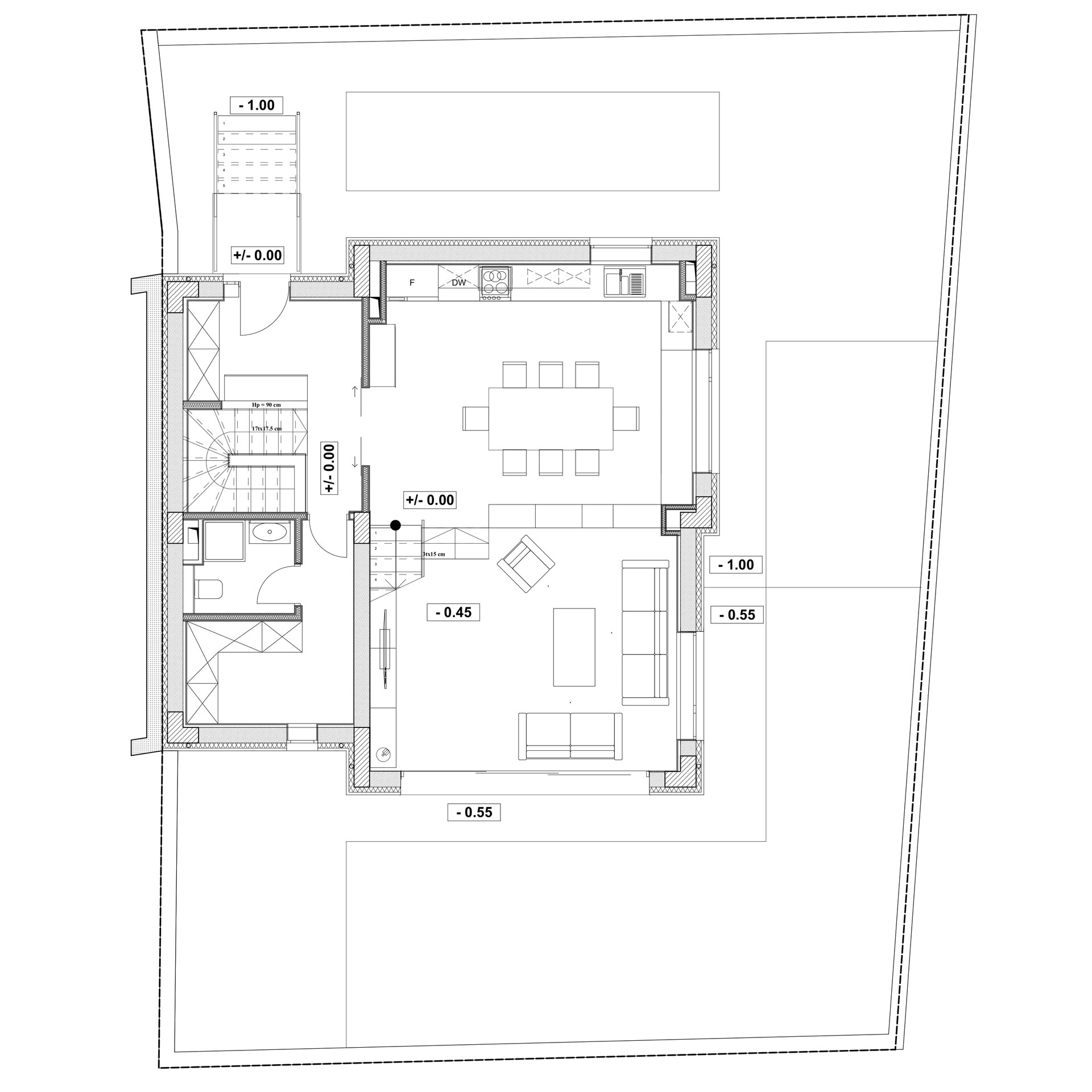 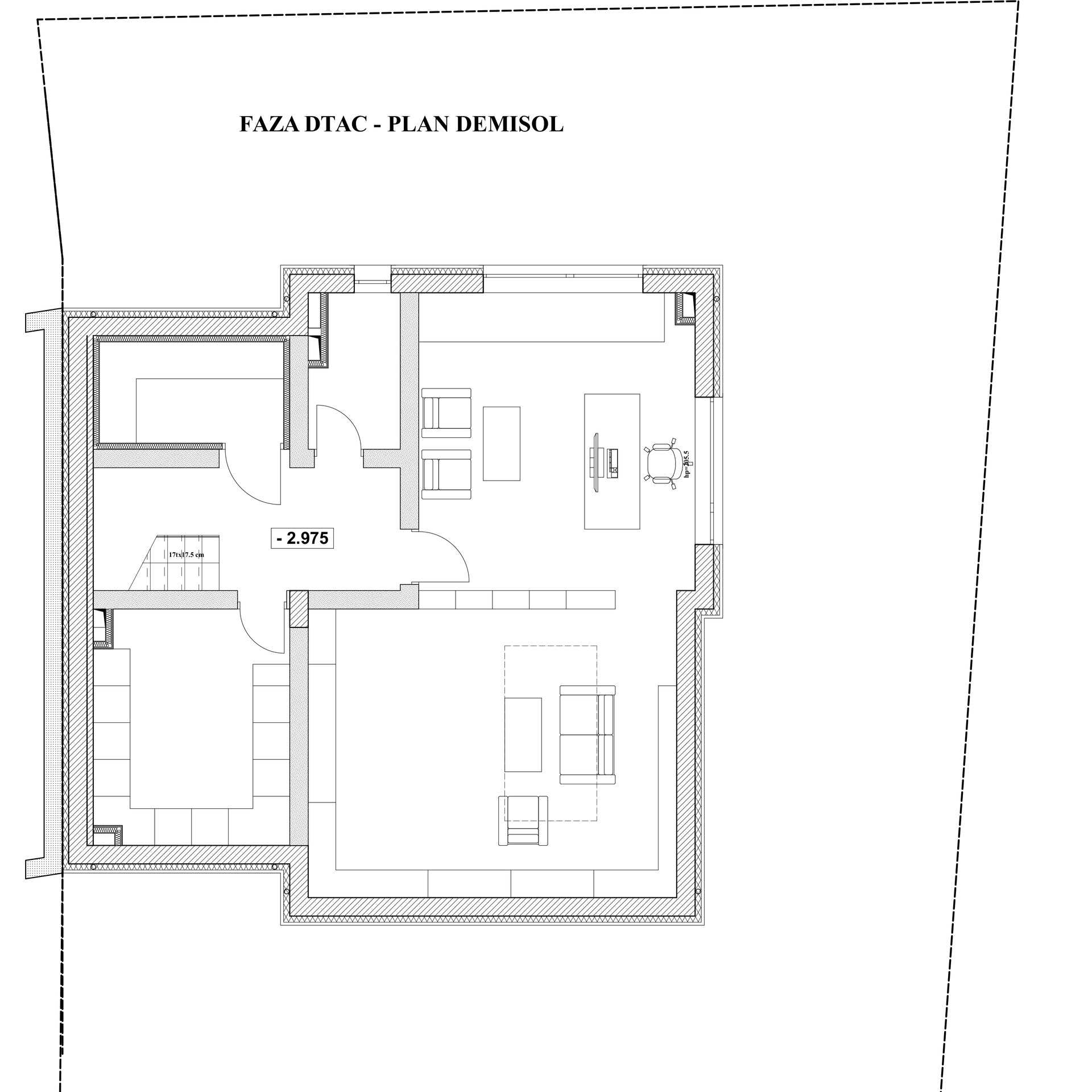 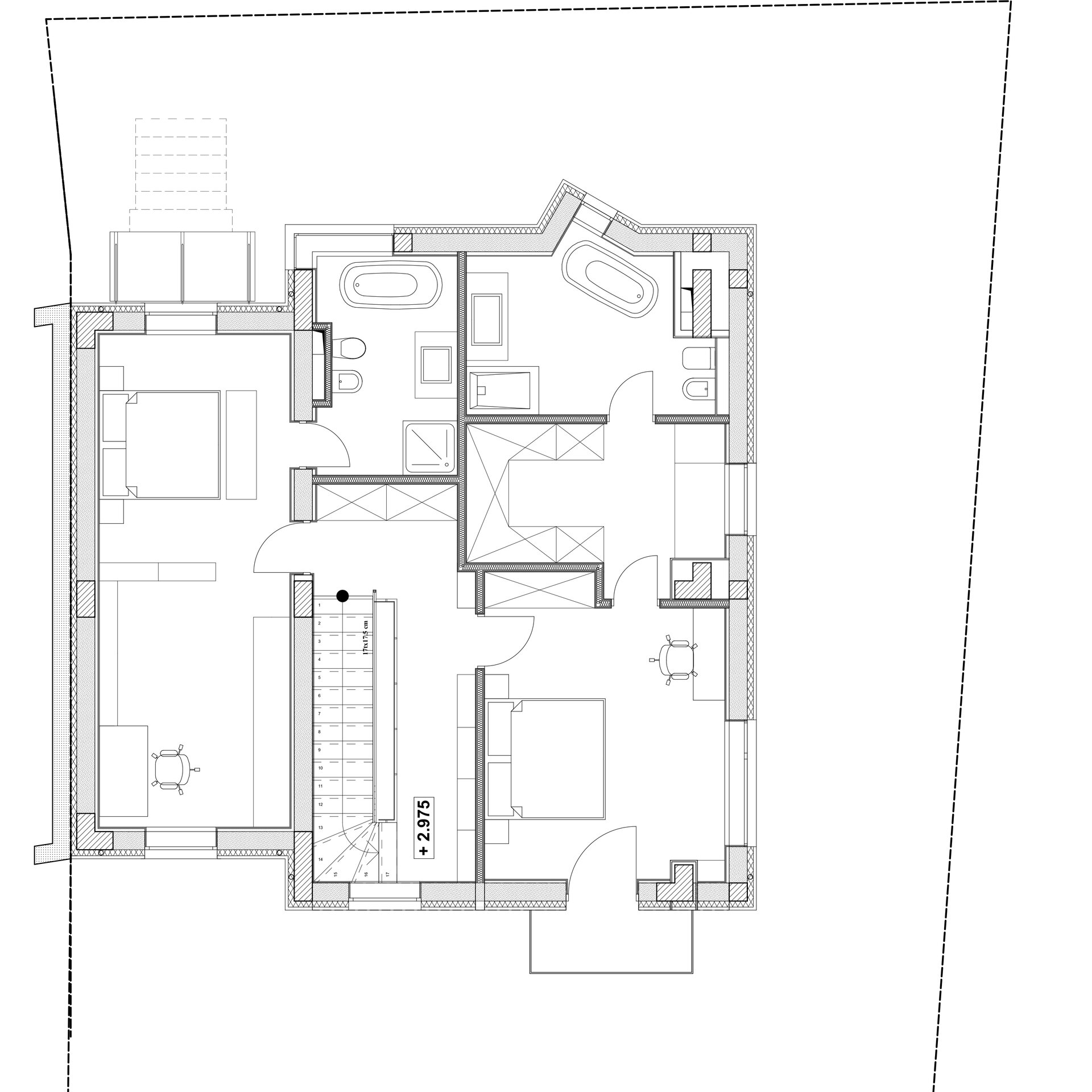 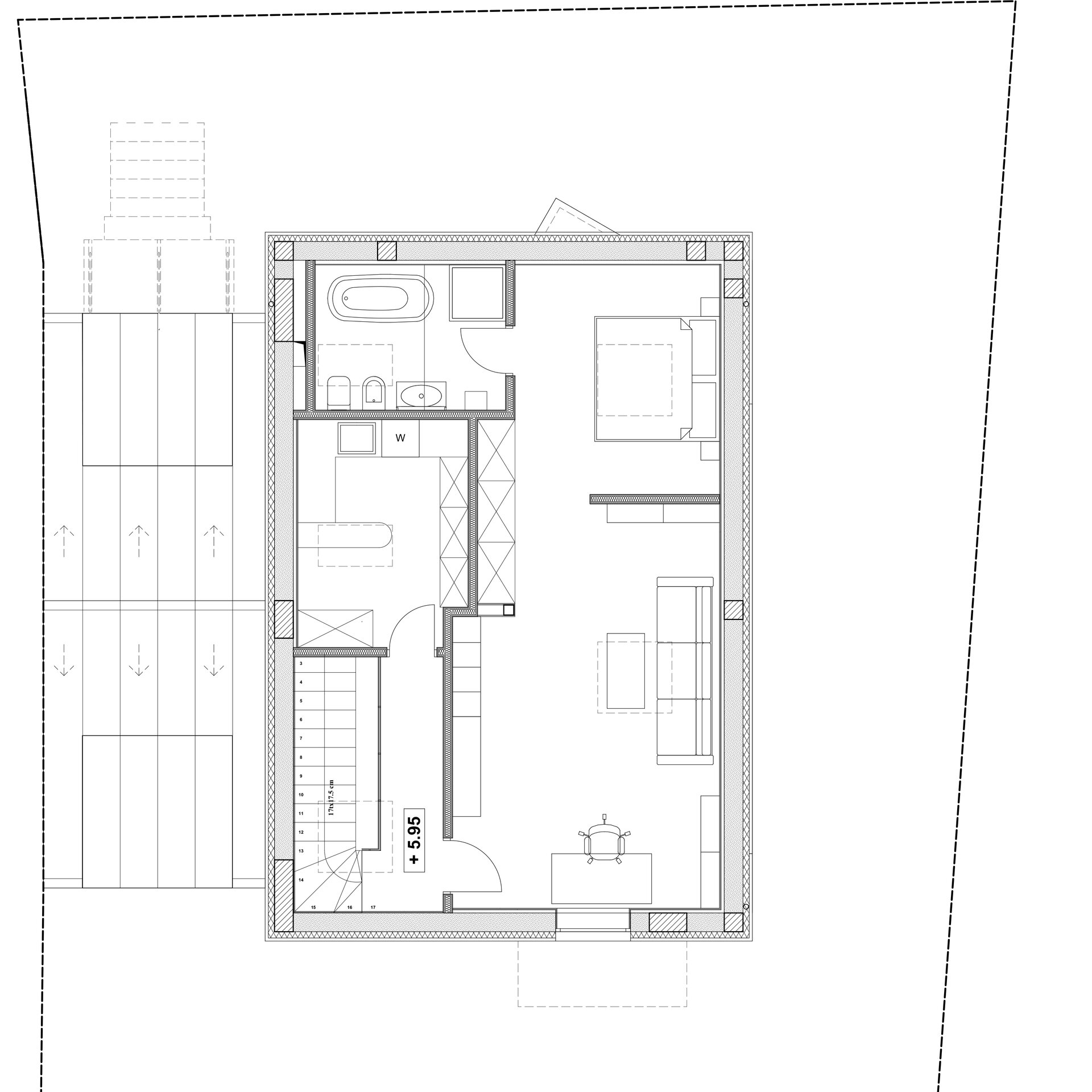 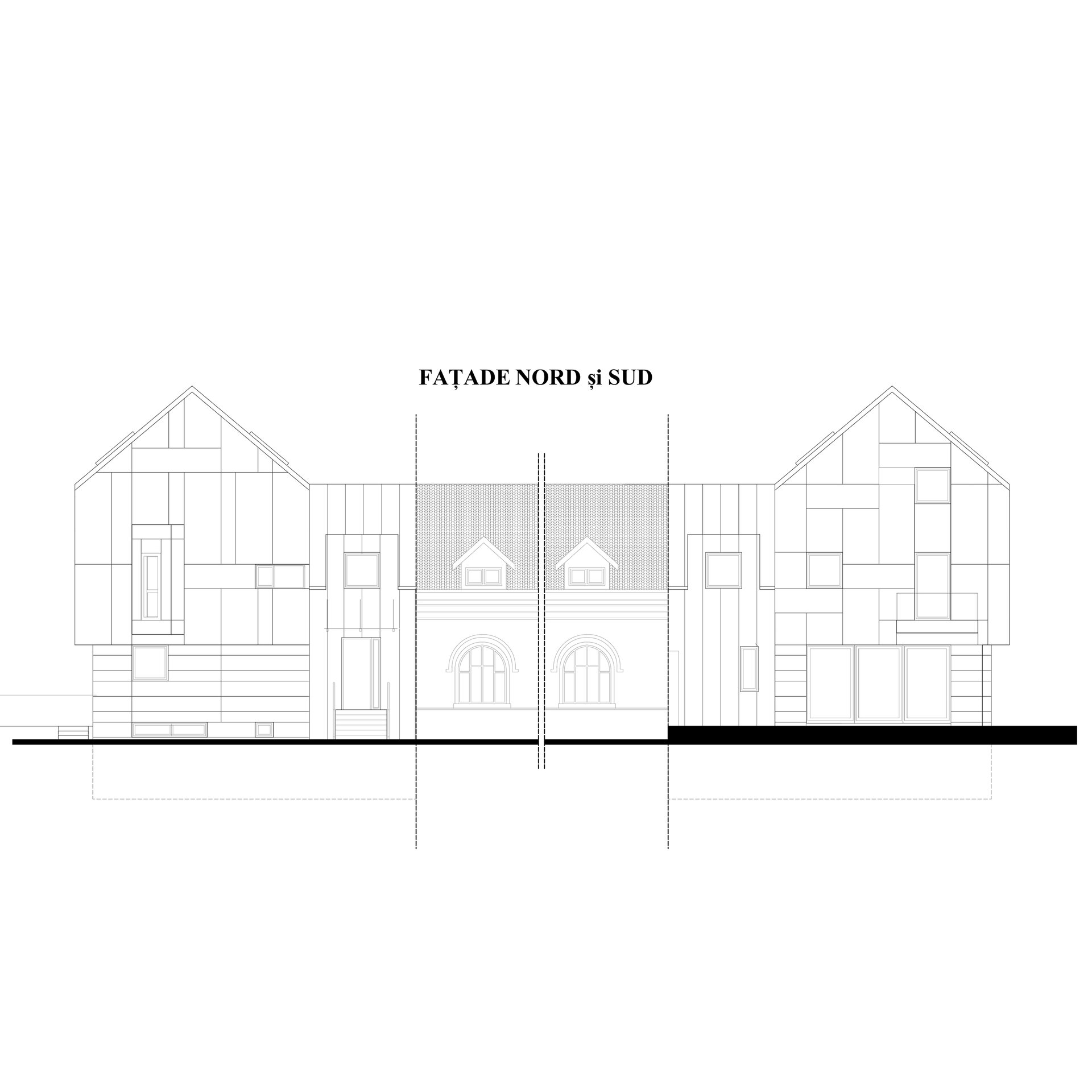 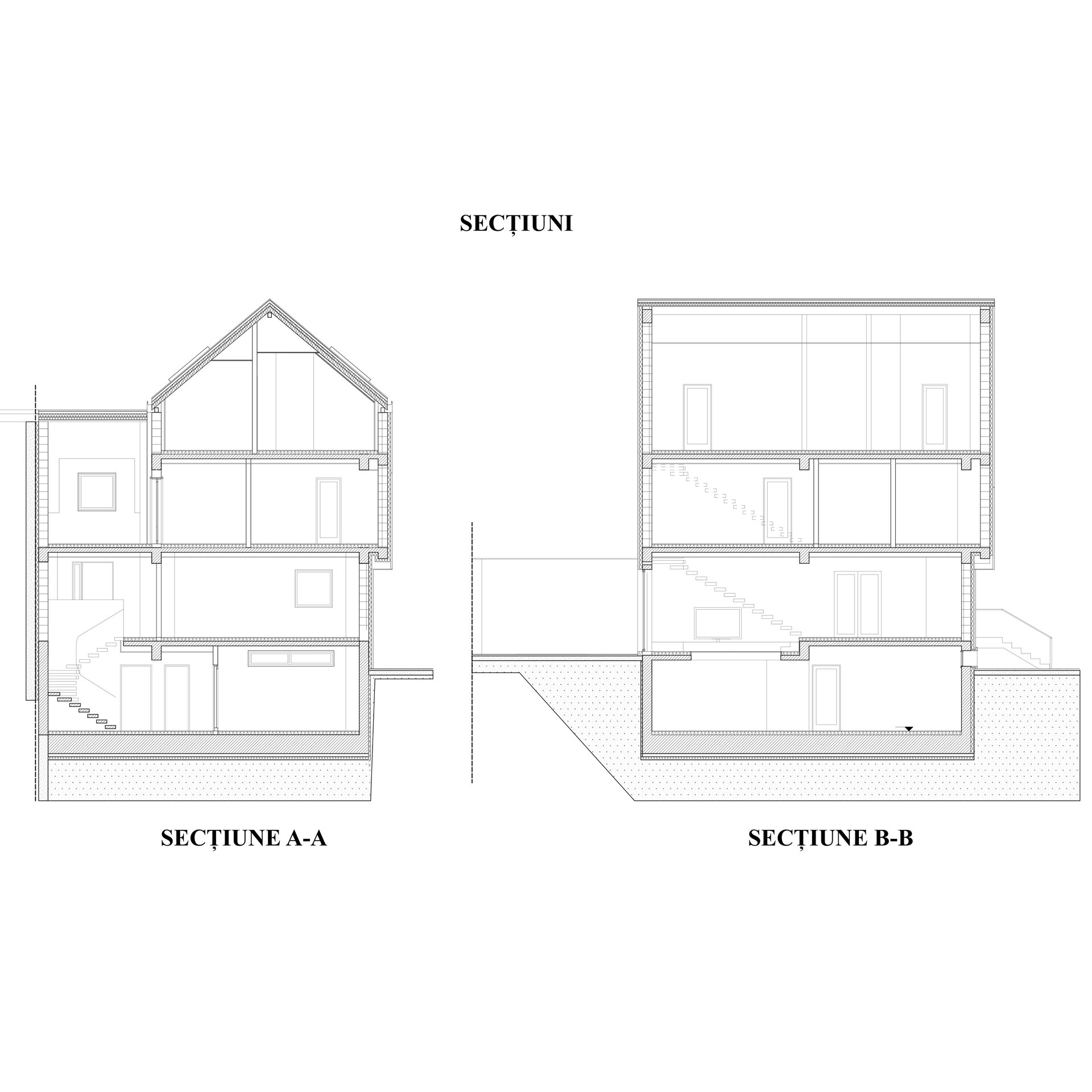 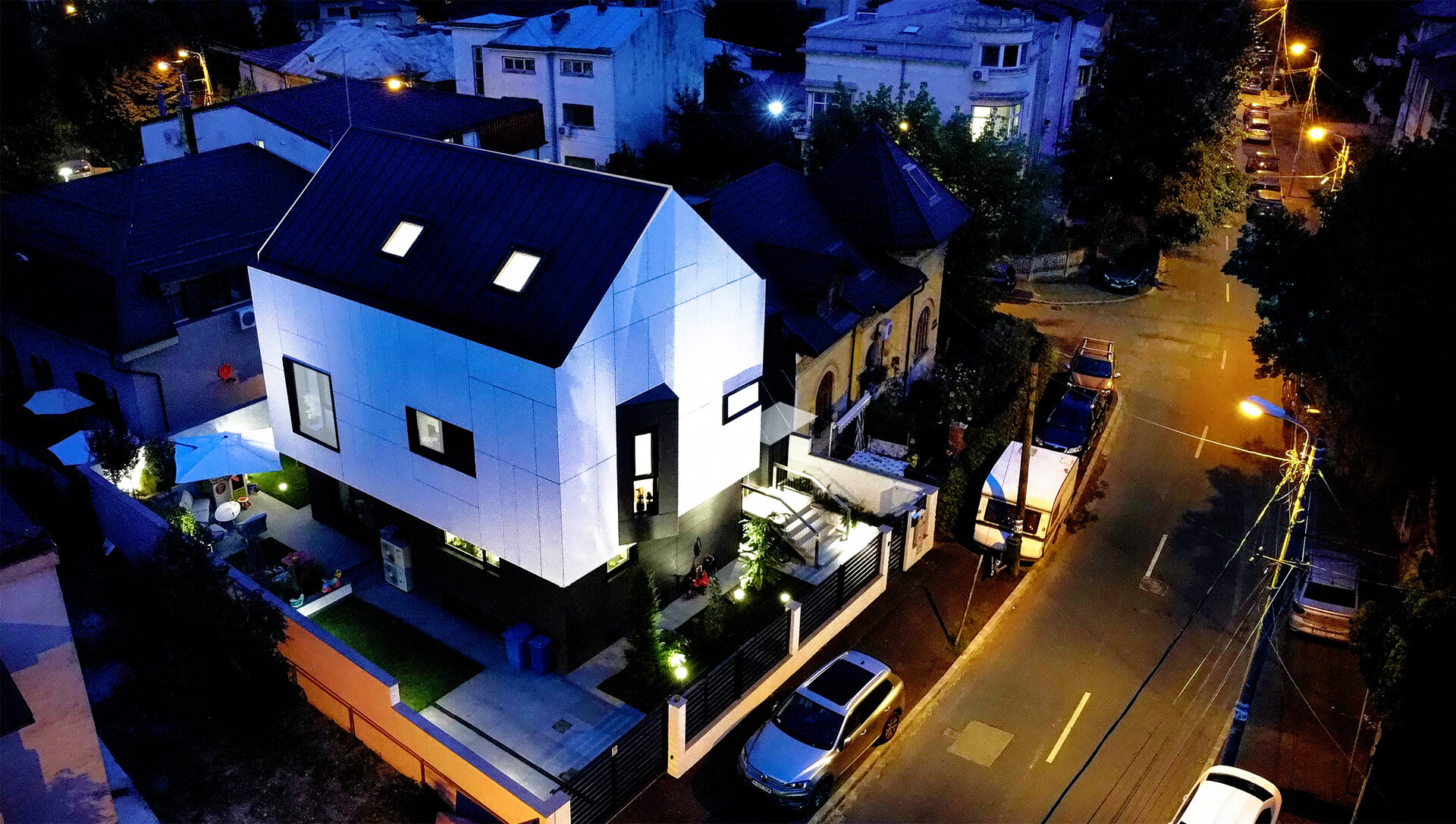 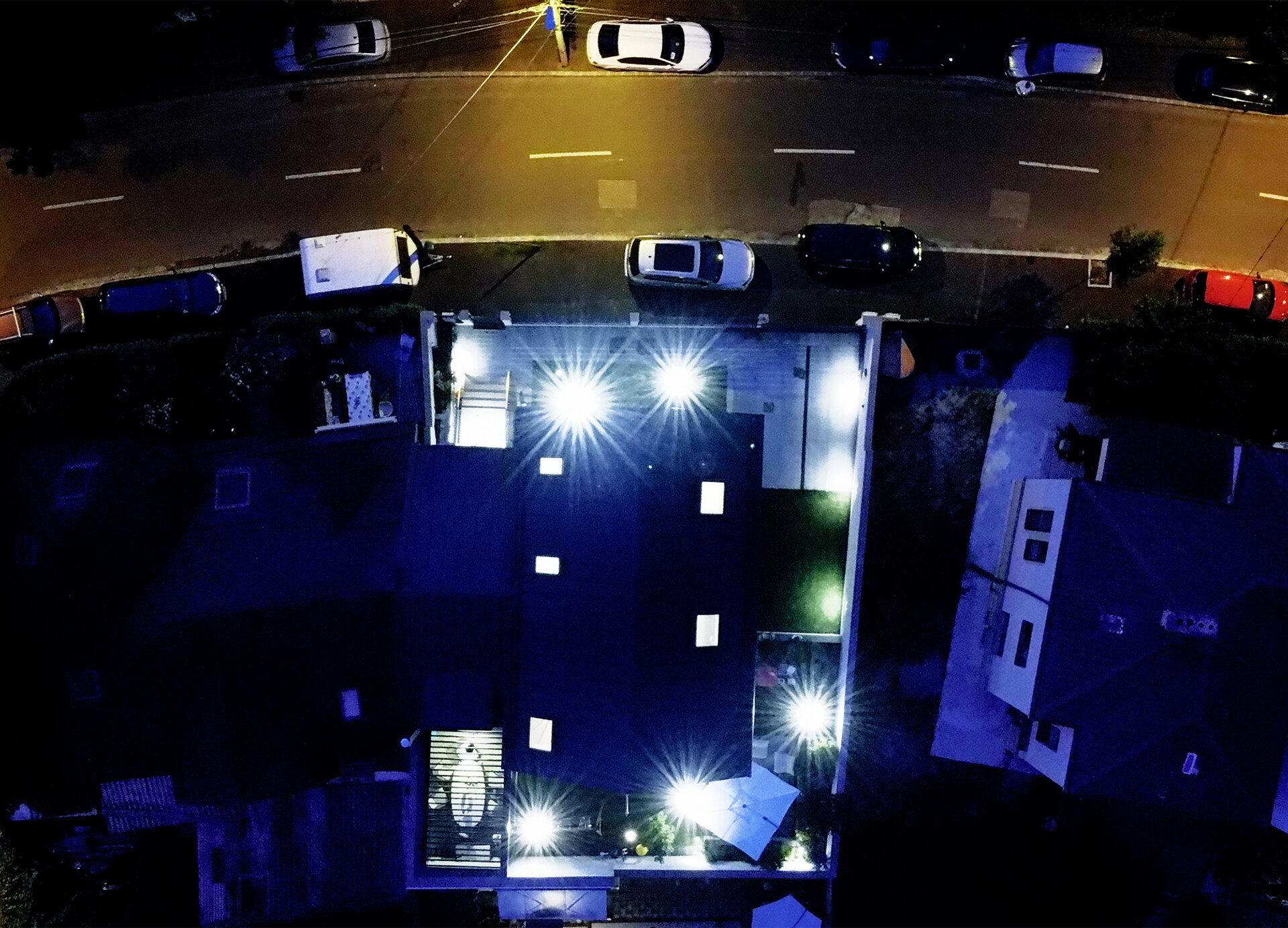 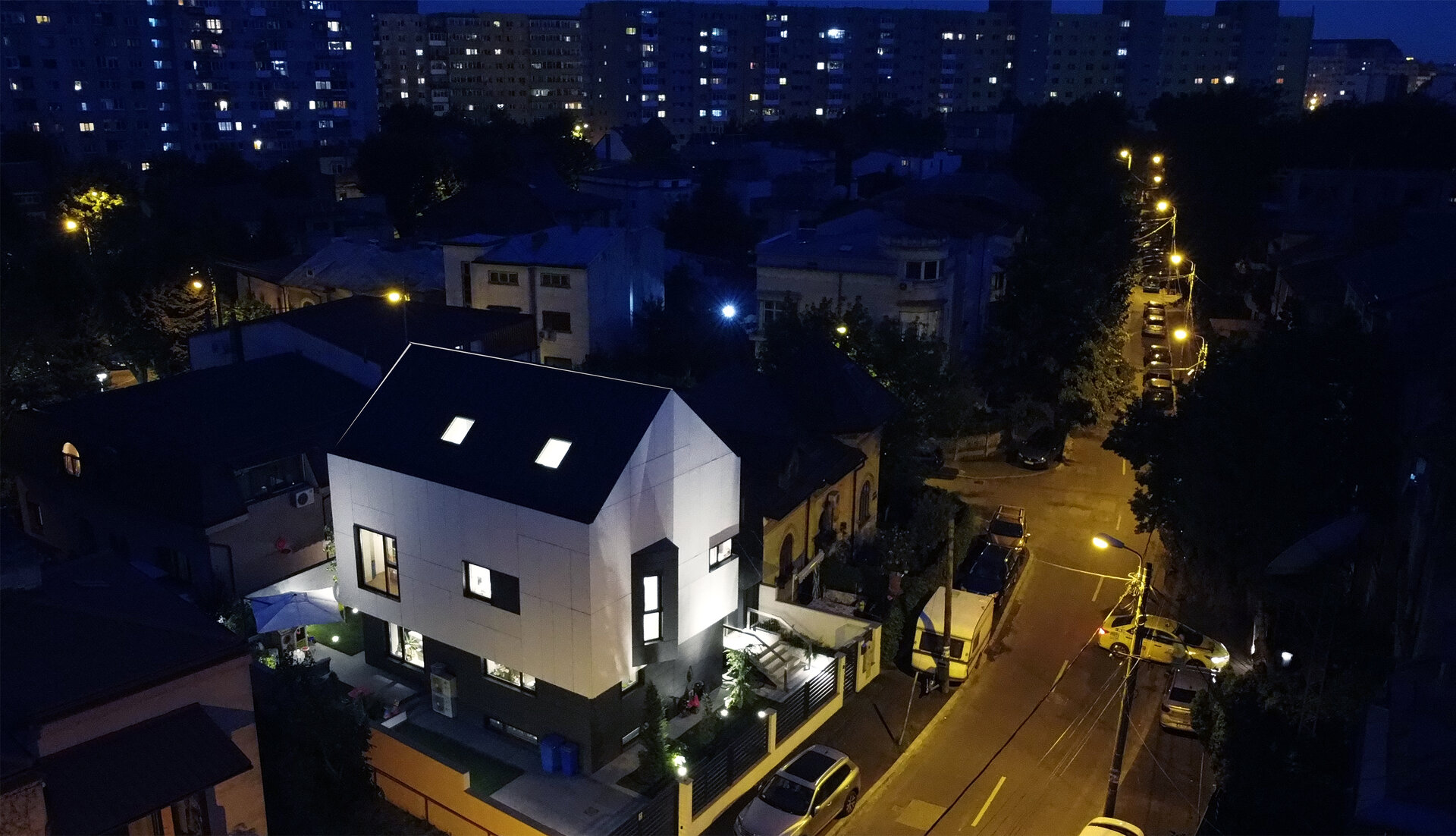 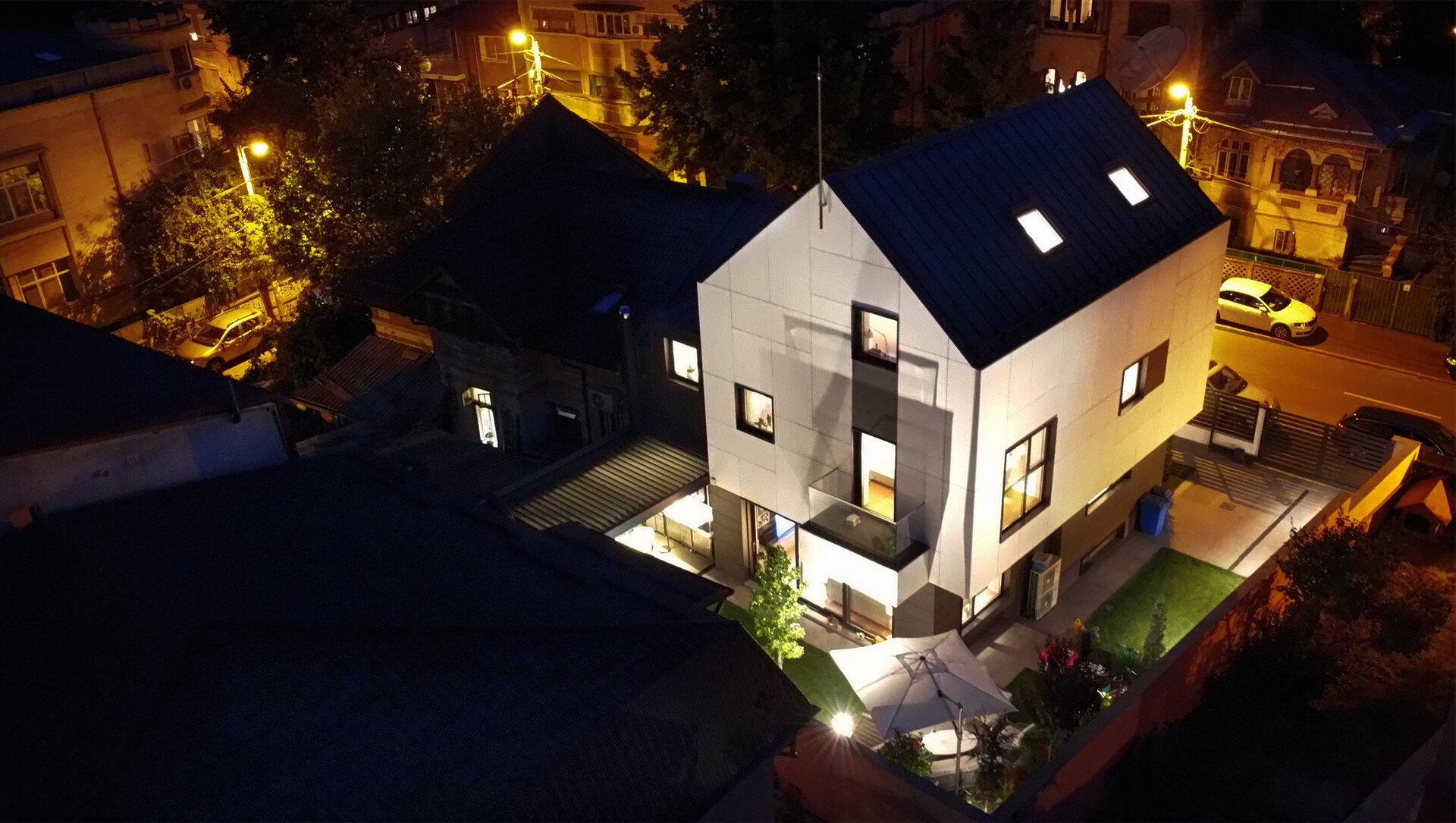 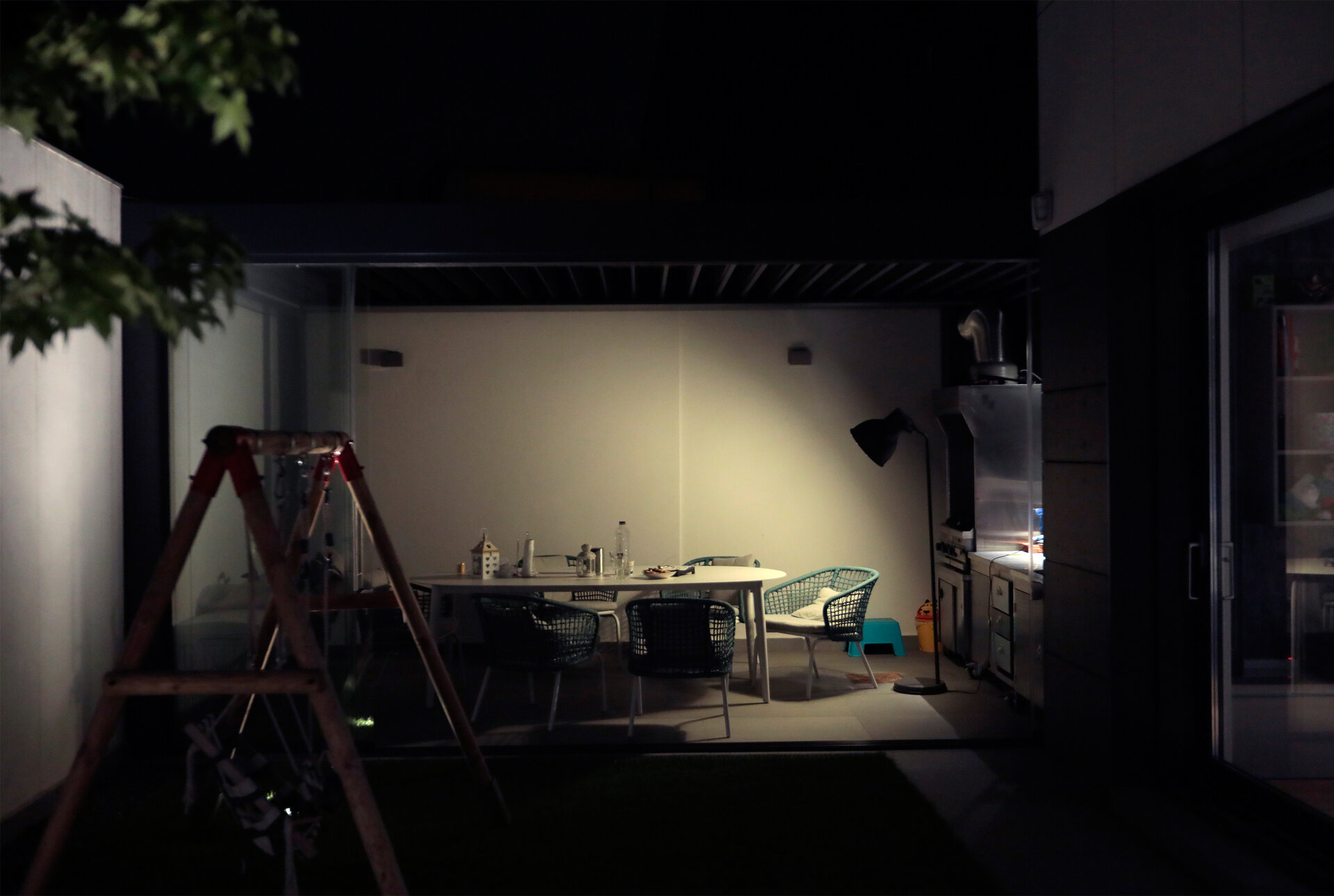 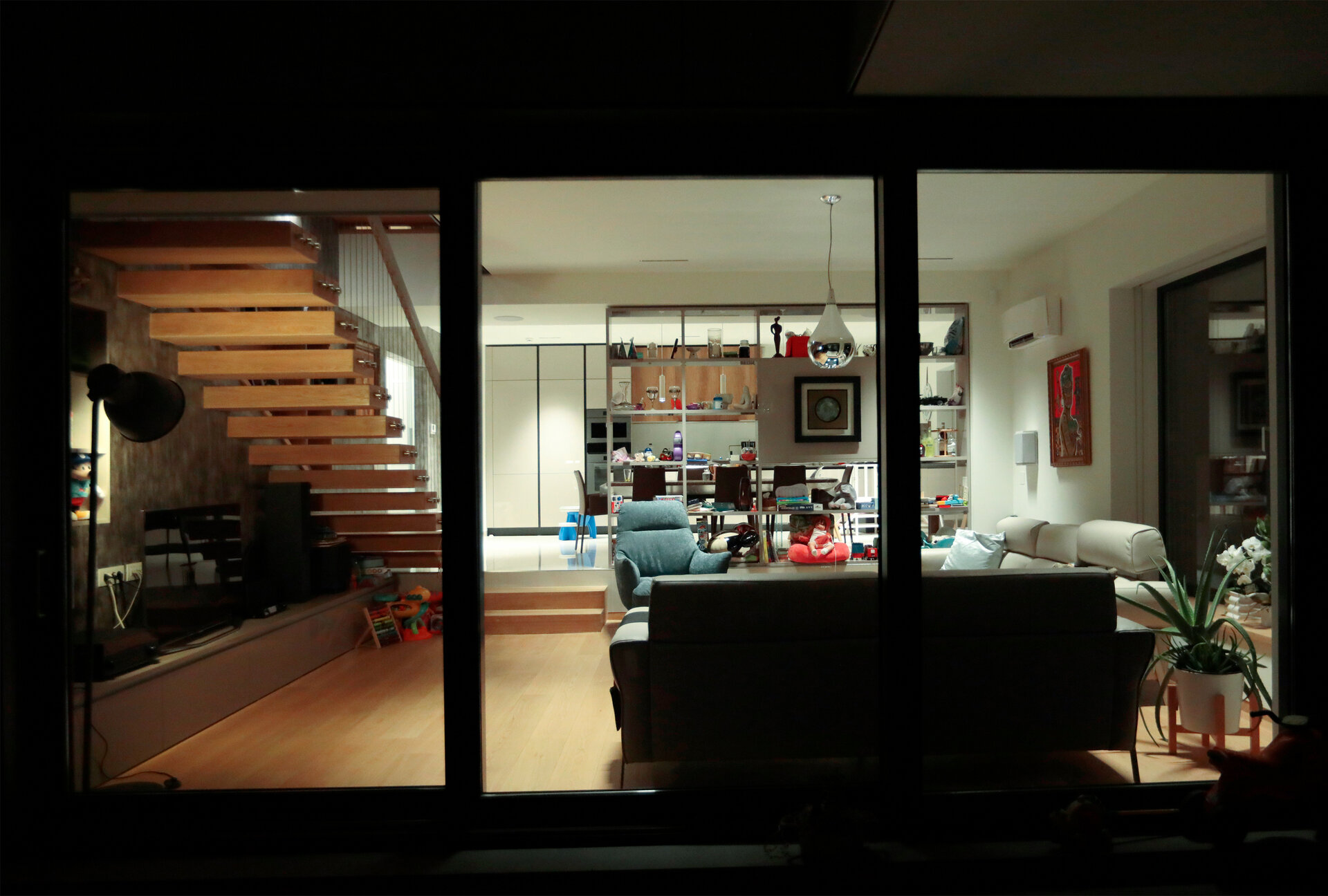 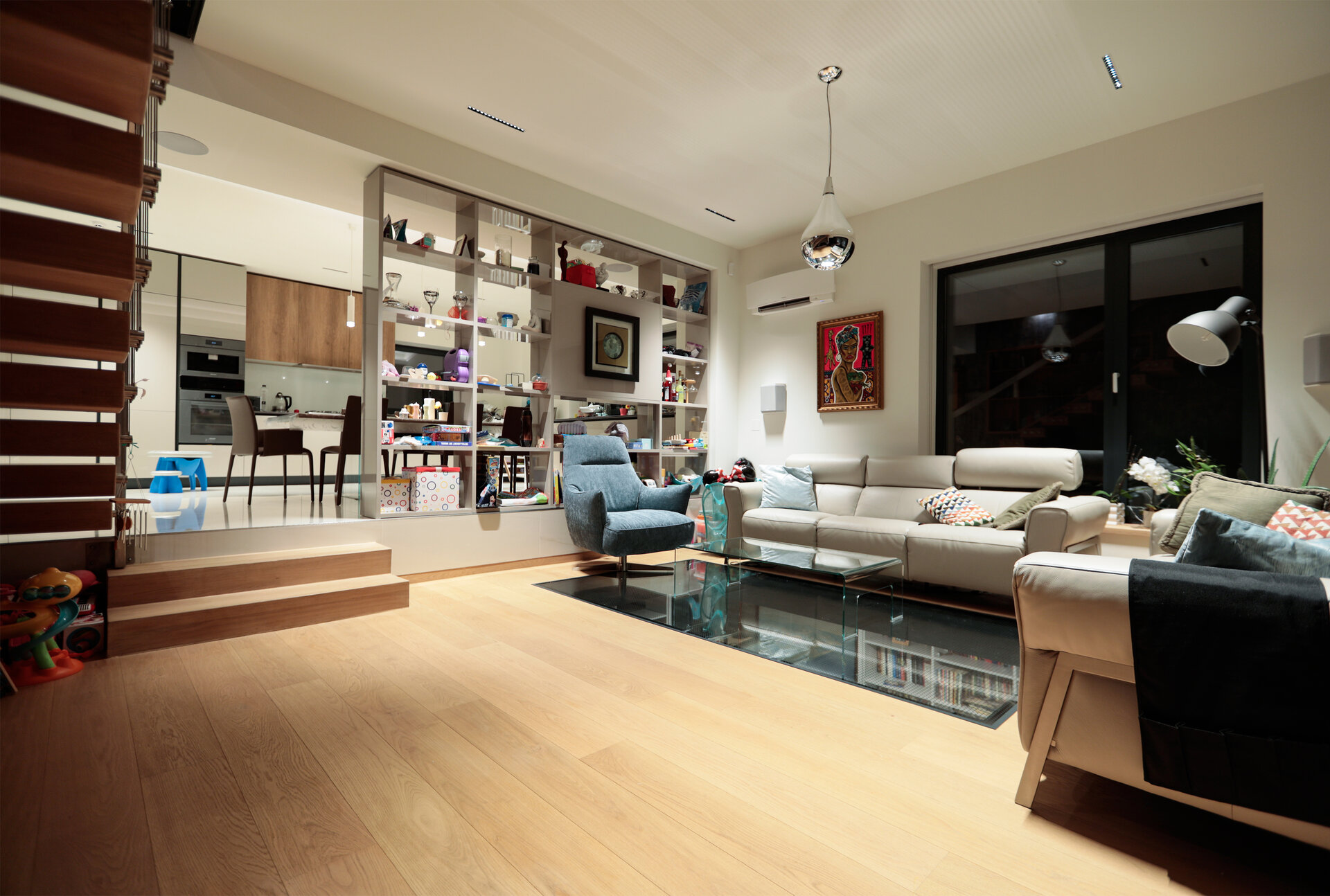 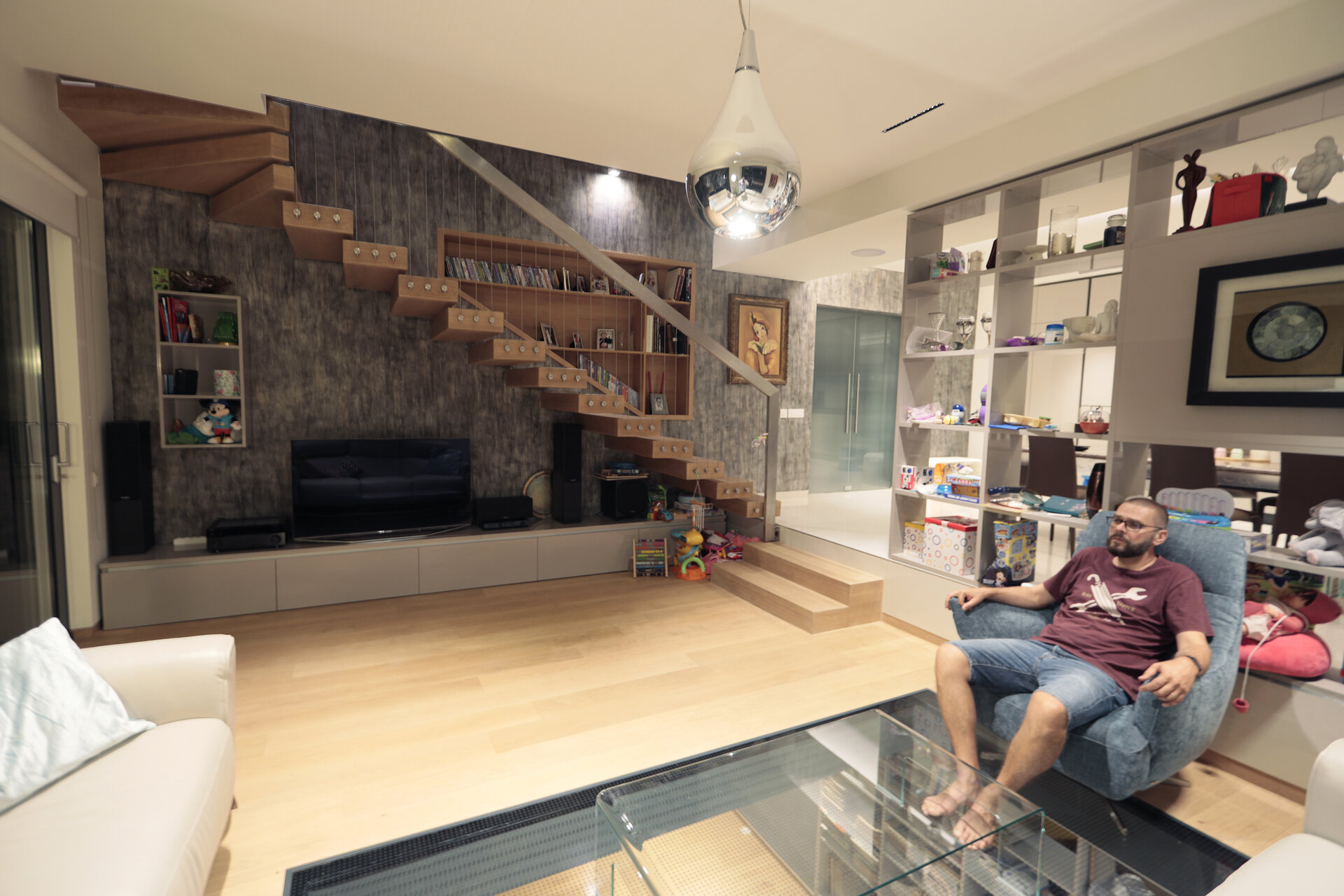 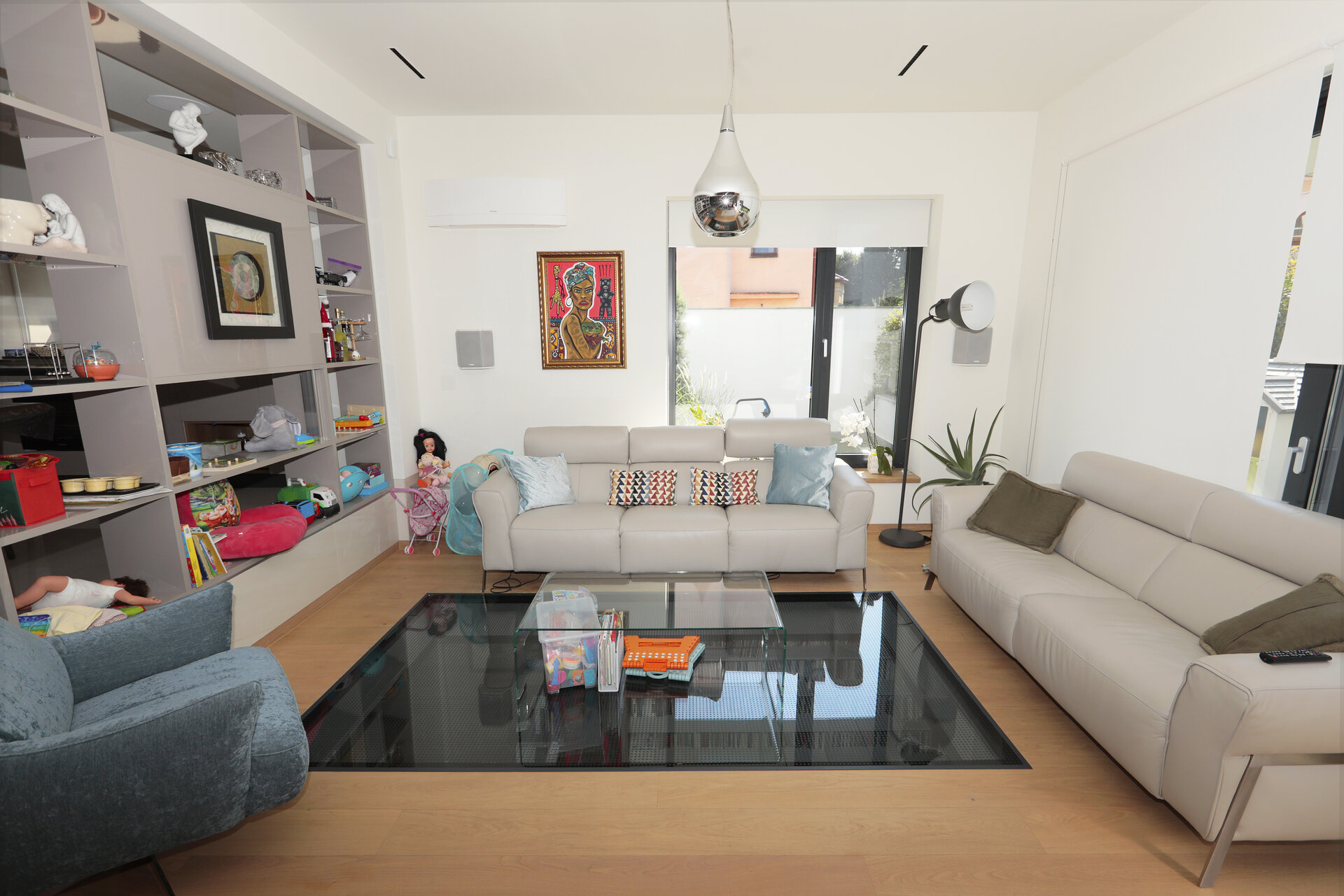 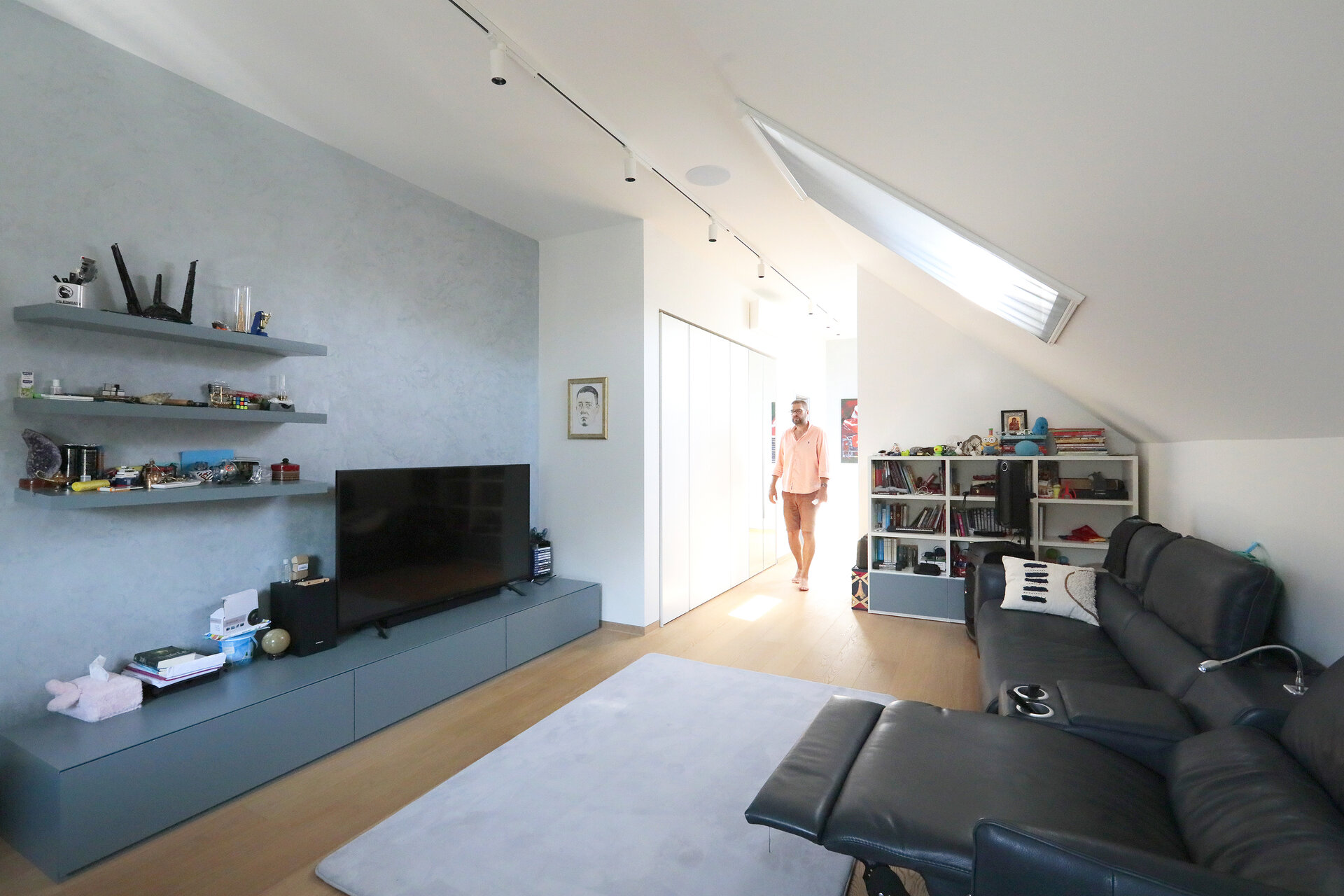 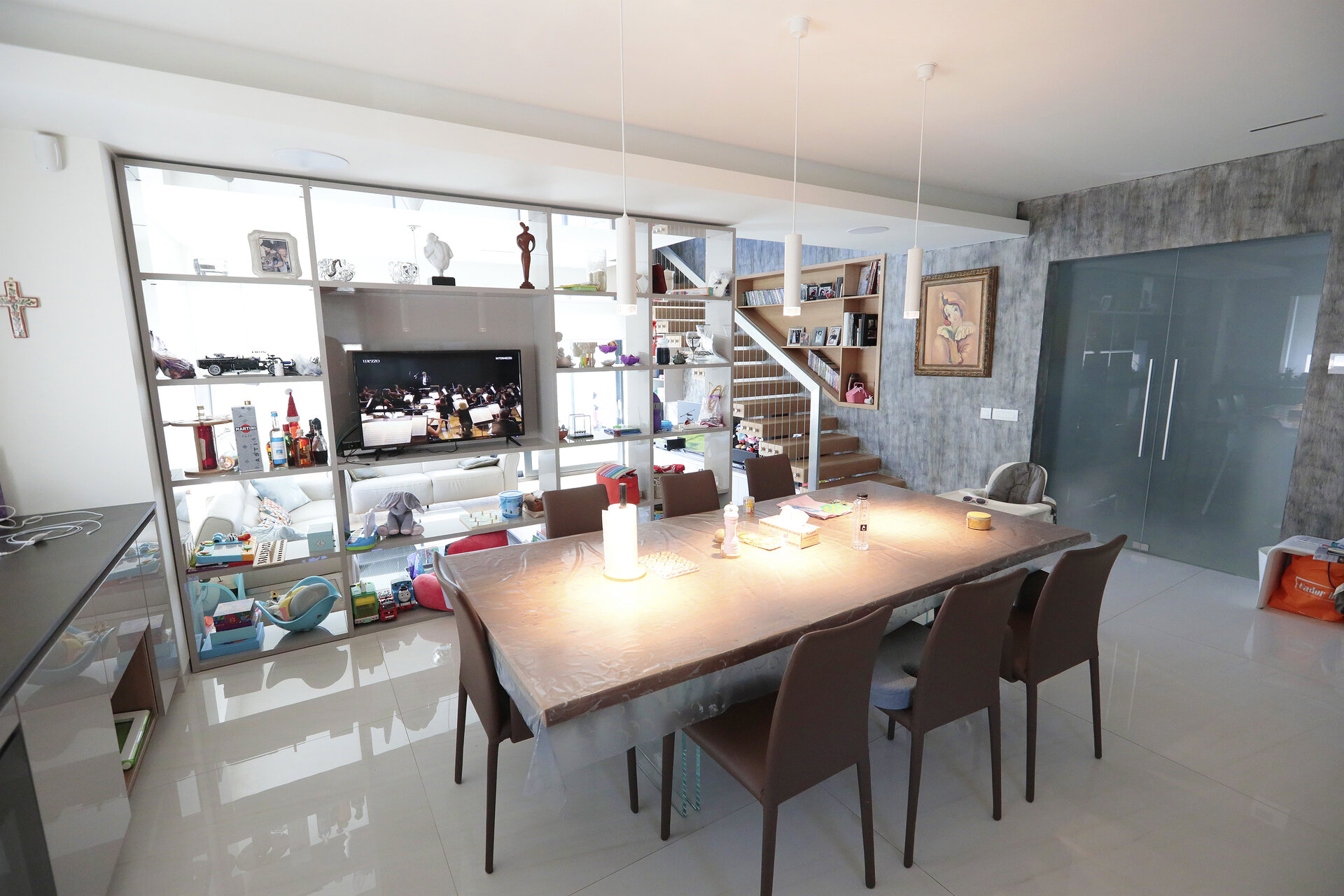 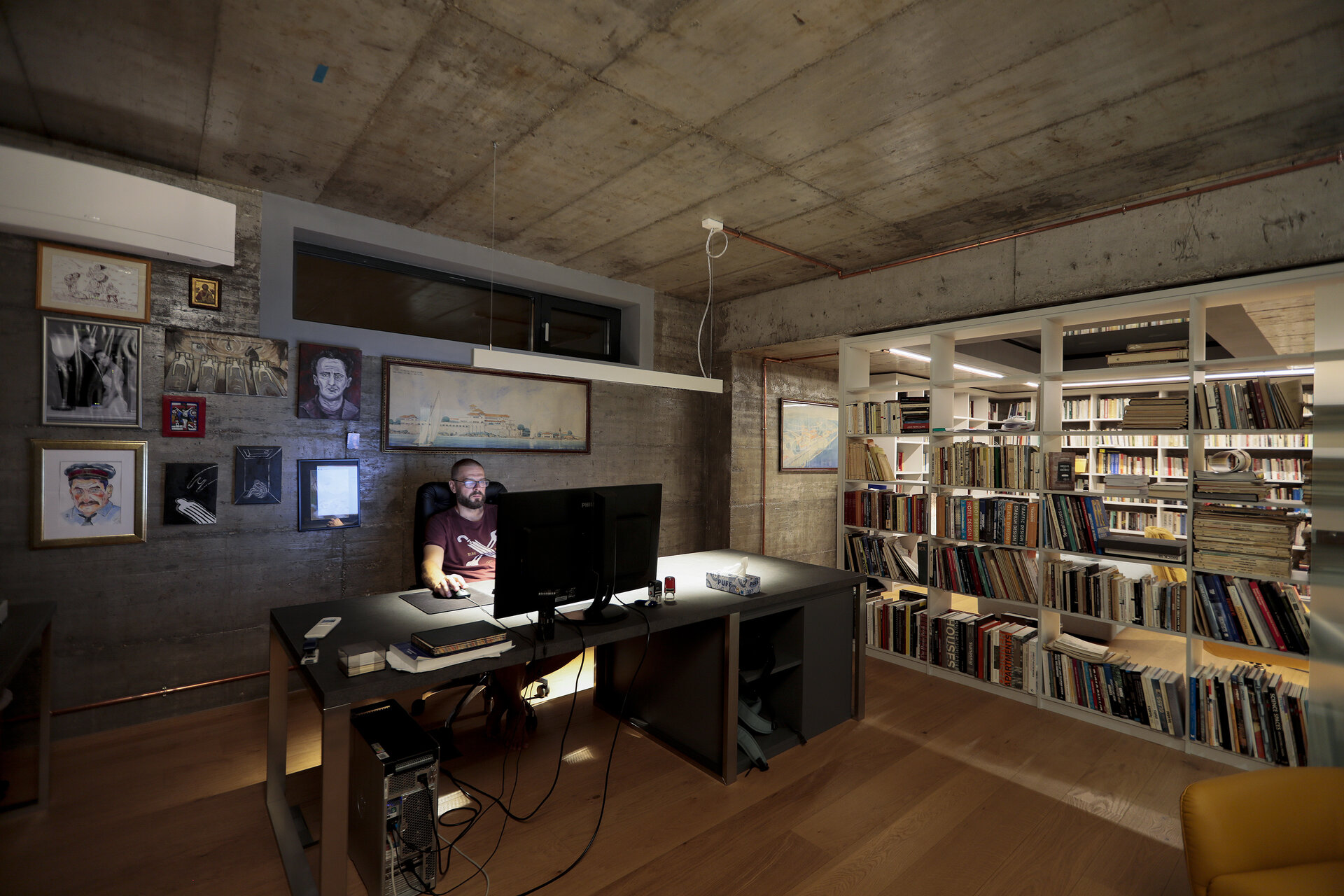 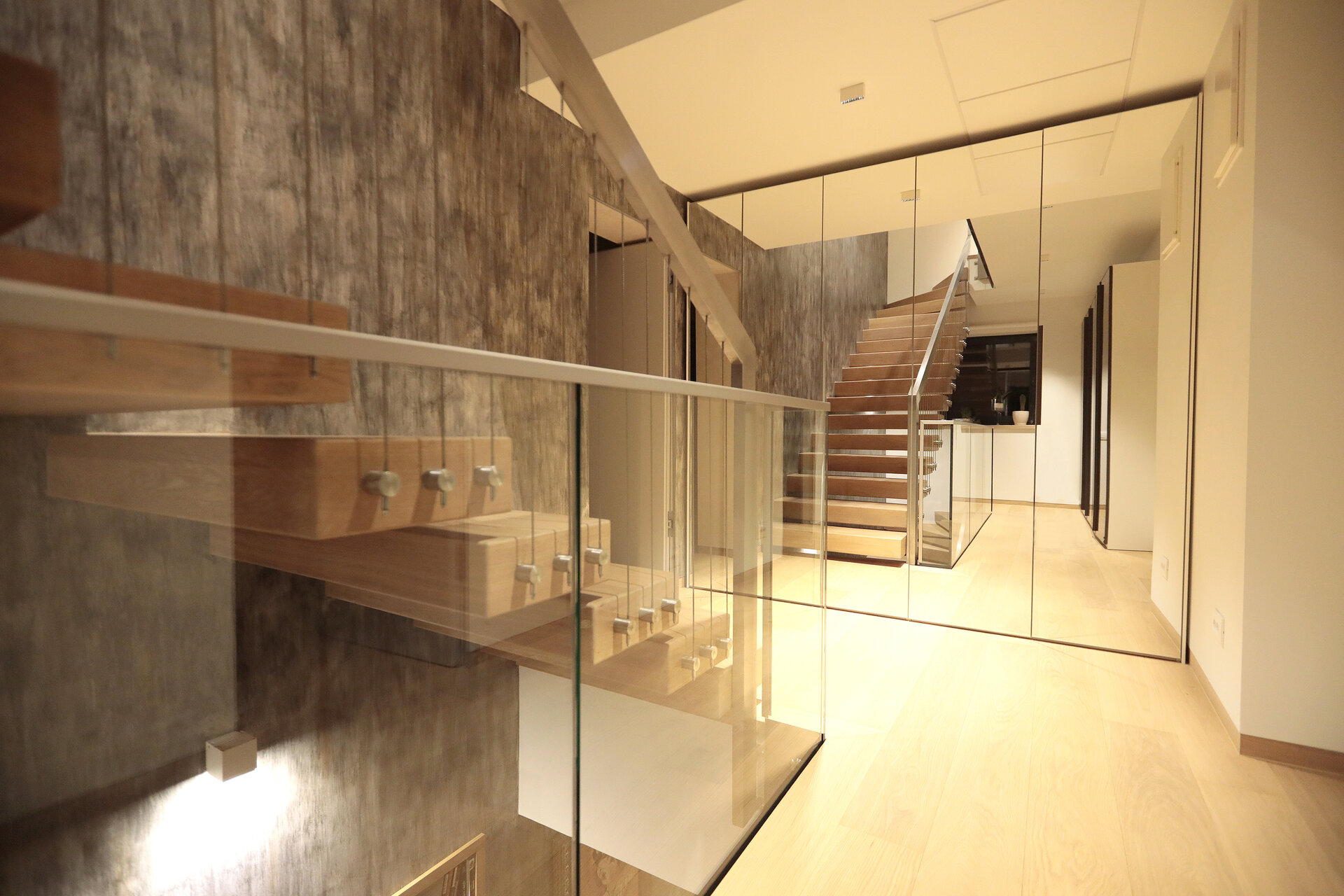