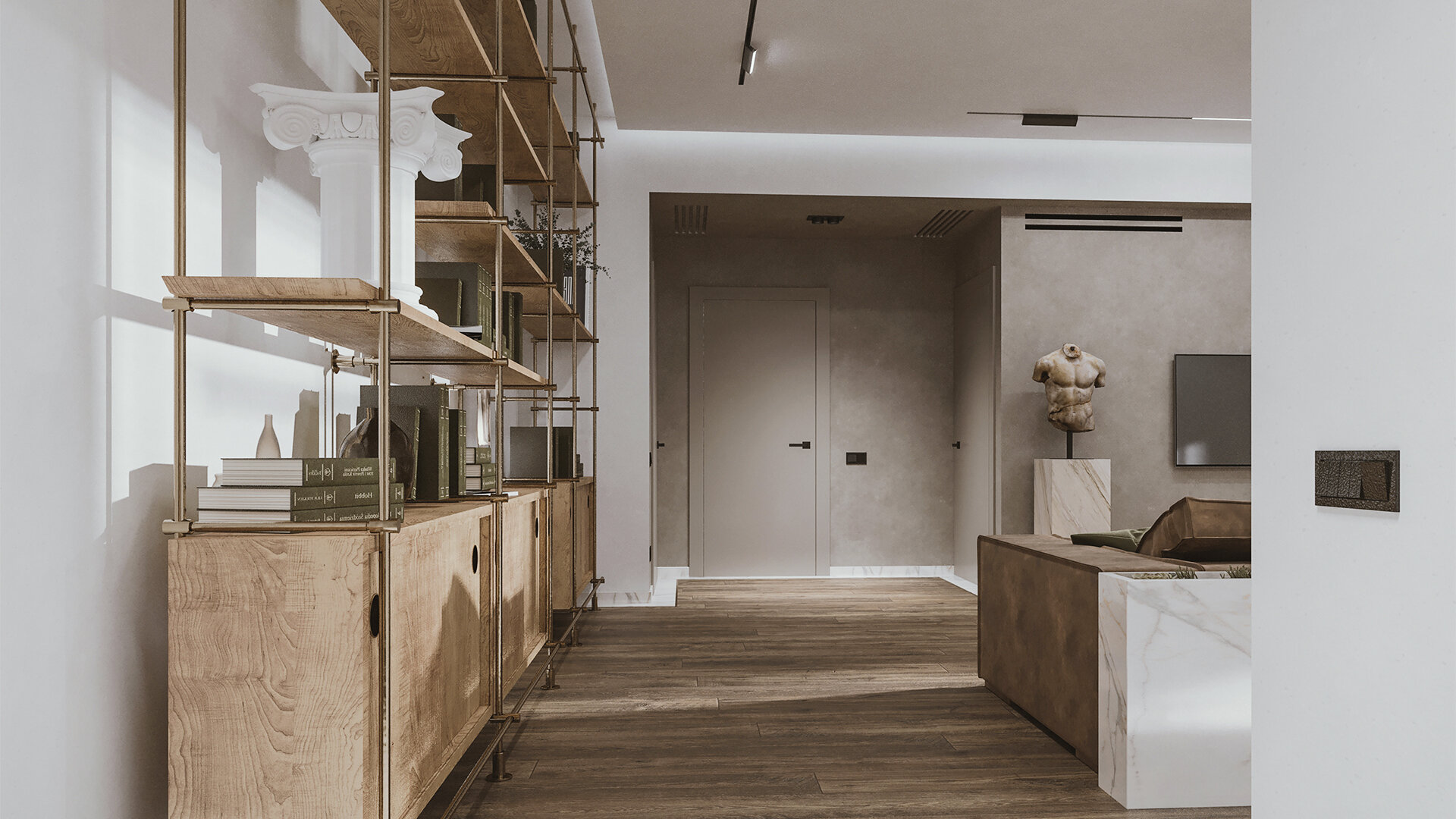 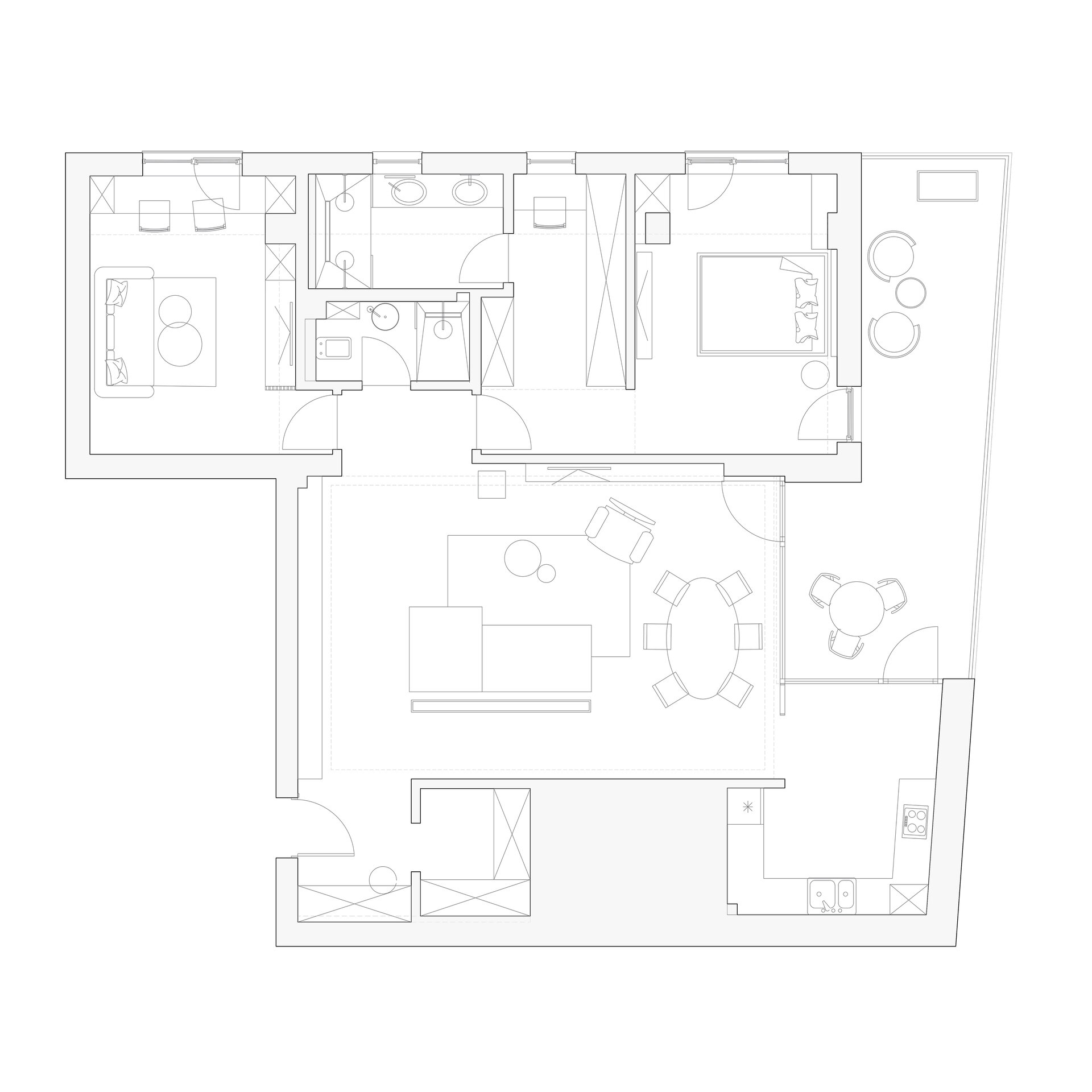 Him & Her
An interior design project represents an act of borrowing. The architect translates into the client’s existence, teaches his daily habits, learning his favourite places, what kind of lifestyle he has, way of being, practically he borrows an existing life scenario in order to give it a new shape.
On the other hand, the beneficiary borrows, in turn, the vision of the architect and the new premises of the housing, the final project turning into a space of intersection between the two coordinates, the client and the architect.
In the current scenario, represented by an apartament with a usable area of 110 square metres, phyisically located in the central area of Bucharest, on Luigi Cazzavilan Street 20, we had to transpose ourselves into the life of a couple of two future doctors for whom the raw, unprocessed and tactile finishings are closer to the ideal vision of a sincere and welcoming home, both in the moments of loneliness and together with friends.
A metaphor that speeks about “Him and Her” ,the couple to whom the project is addressed, the masculine and the feminine, but also about Us, meaning the architect and the client, is found in the living area, more precisely in reference to the two proposed sculptures, the male bust and the Ionic capital. The bust shows an imprint of the chosen profession, medicine, but also a masculine symbol. In front of it stands in silence an Ionic capital, which refers to the feminine proportions, practically Her in an architectural language.
Him and Her symbolyze understanding, contrast, harmony, but especially complementarity found both in the chosen finishes and shapes of the furniture pieces. At the functional level, the living area is clearly delimited from the night area. This delimitation is marked with the creation of a suggestive frame on which the silhouette of the bust is outlined, being the main point that any person walking into the apartment sees. The furniture plan of the interior space resulted from the delimitation of the main circulations and the orientation of the windows. The living area, with one of the sides facing the terrace, borrows its character, becoming a living picture that looks to the dining area, but also to the kitchen. In addition to the glass partition which separetes the living room from the terrace, provided by the architectural project, we proposed an additional one, in order to close the kitchen optionally. This was not the only reason, we took in consideration also the visual factors, the glass partition contributing to the feeling of length.
The master bathroom accentuates the vertical axis of the window. The service bathroom, which does not benefit from natural light, follows the same idea, this time brought in the scenario using a mirror outilned by the LED strips, metaphorically similar to the frame of a window.
The two bedrooms are defined by the presence of a “masked” beam with a clean, matte medium-density fibreboard, which visually leads the gaze to the environment. At the tactile level this frame emphasizes the raw finish of the walls, by contrast.
The kitchen continues the language of complementarity of textures, shapes, masculine and feminine, a concept that all the spaces of the apartment talk about. 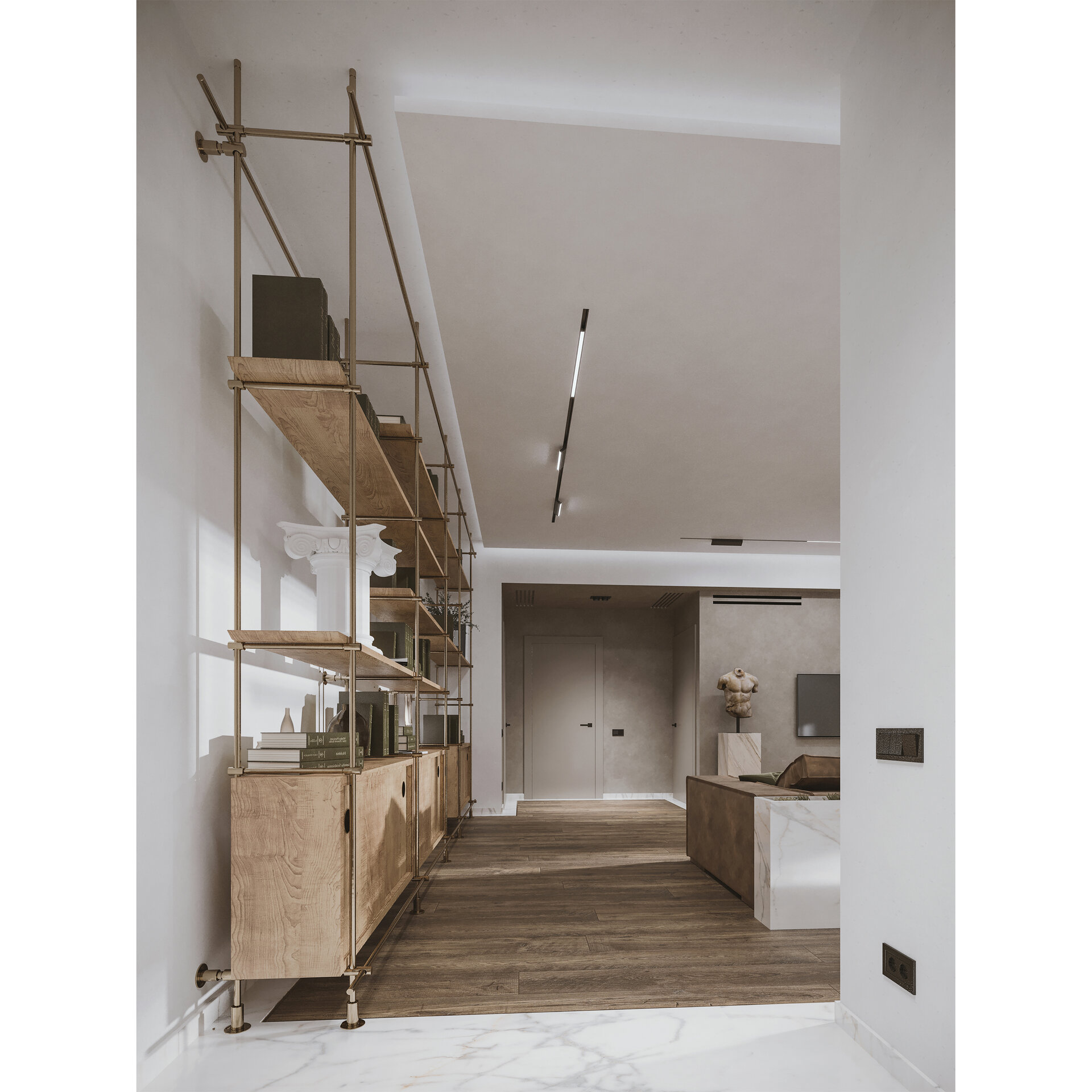 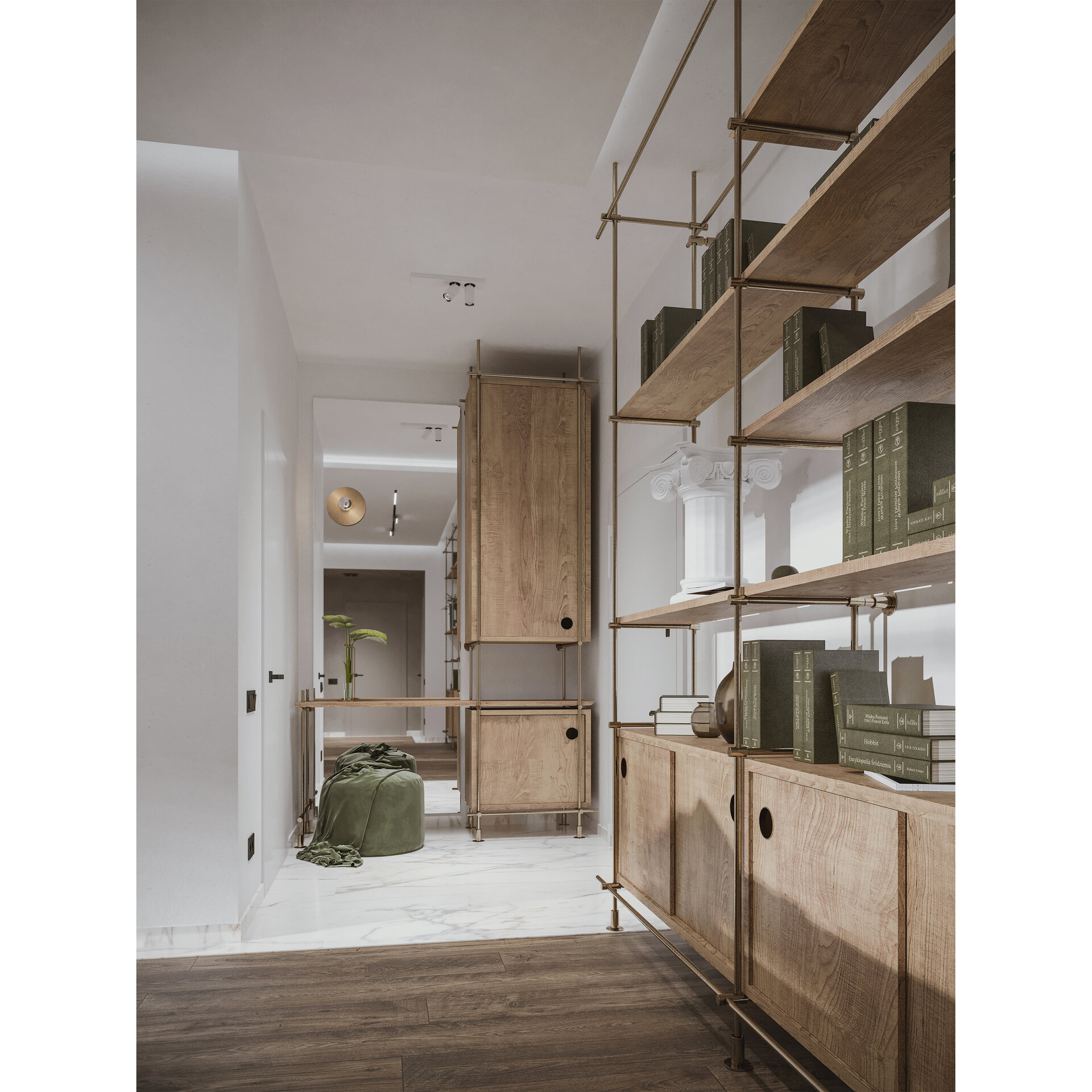 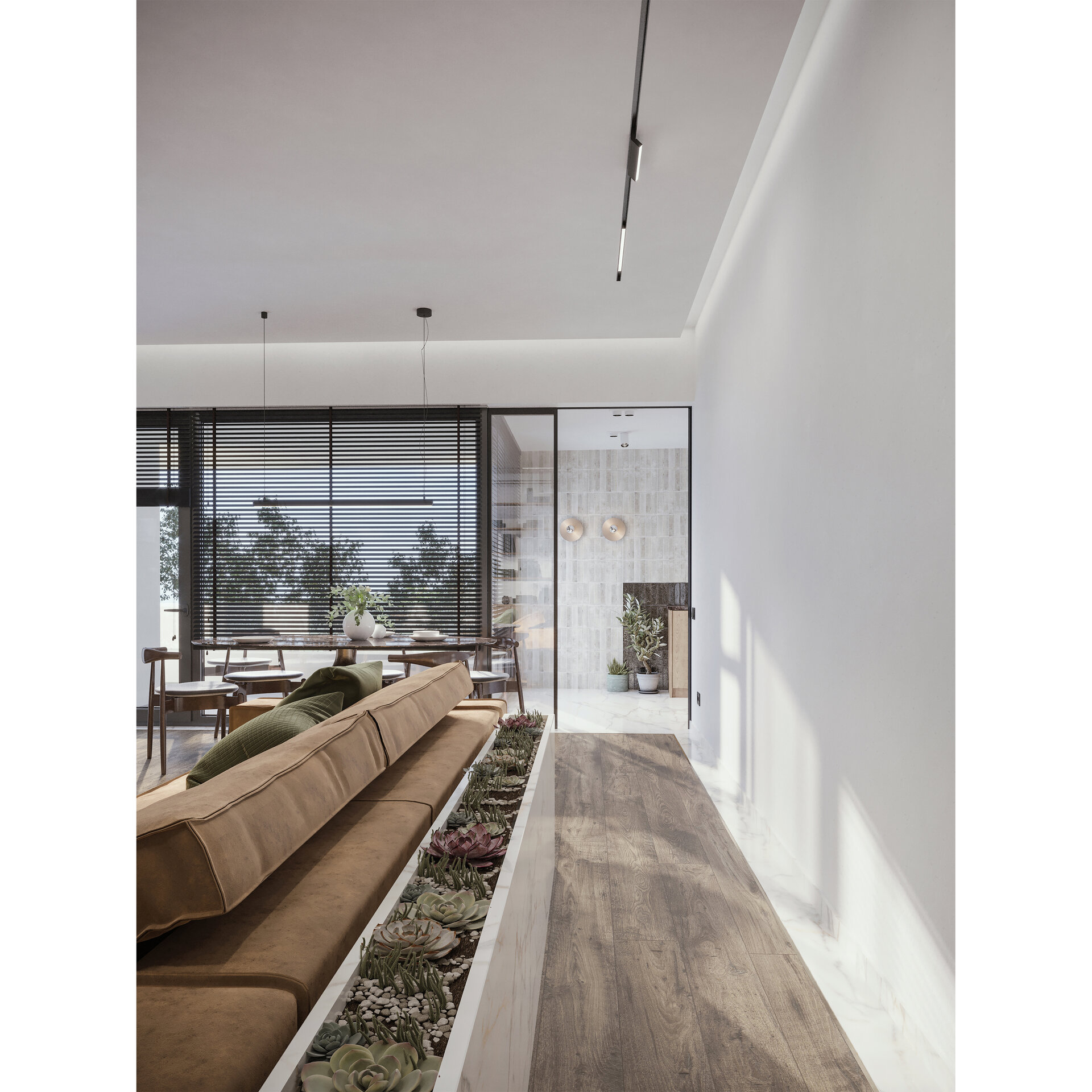 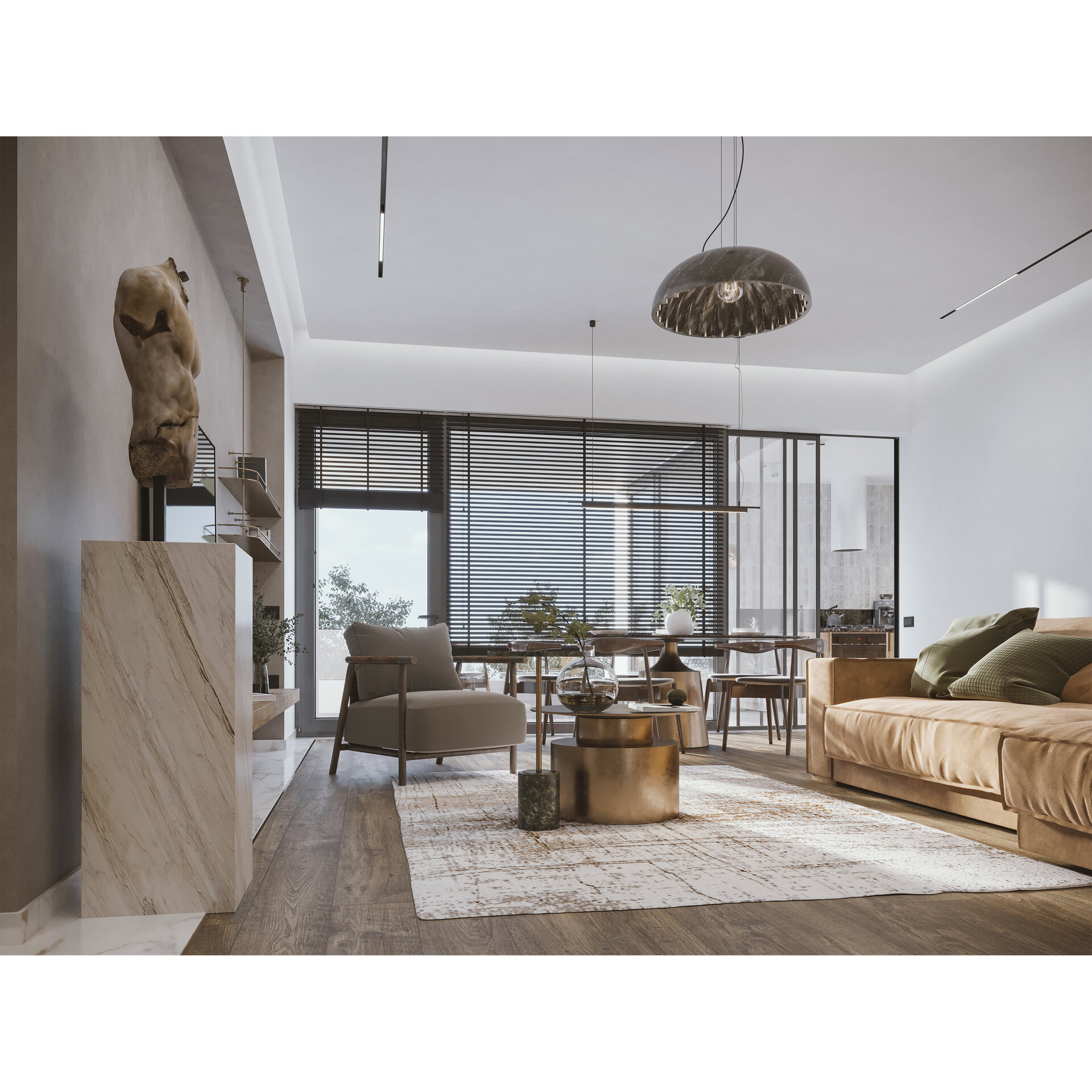 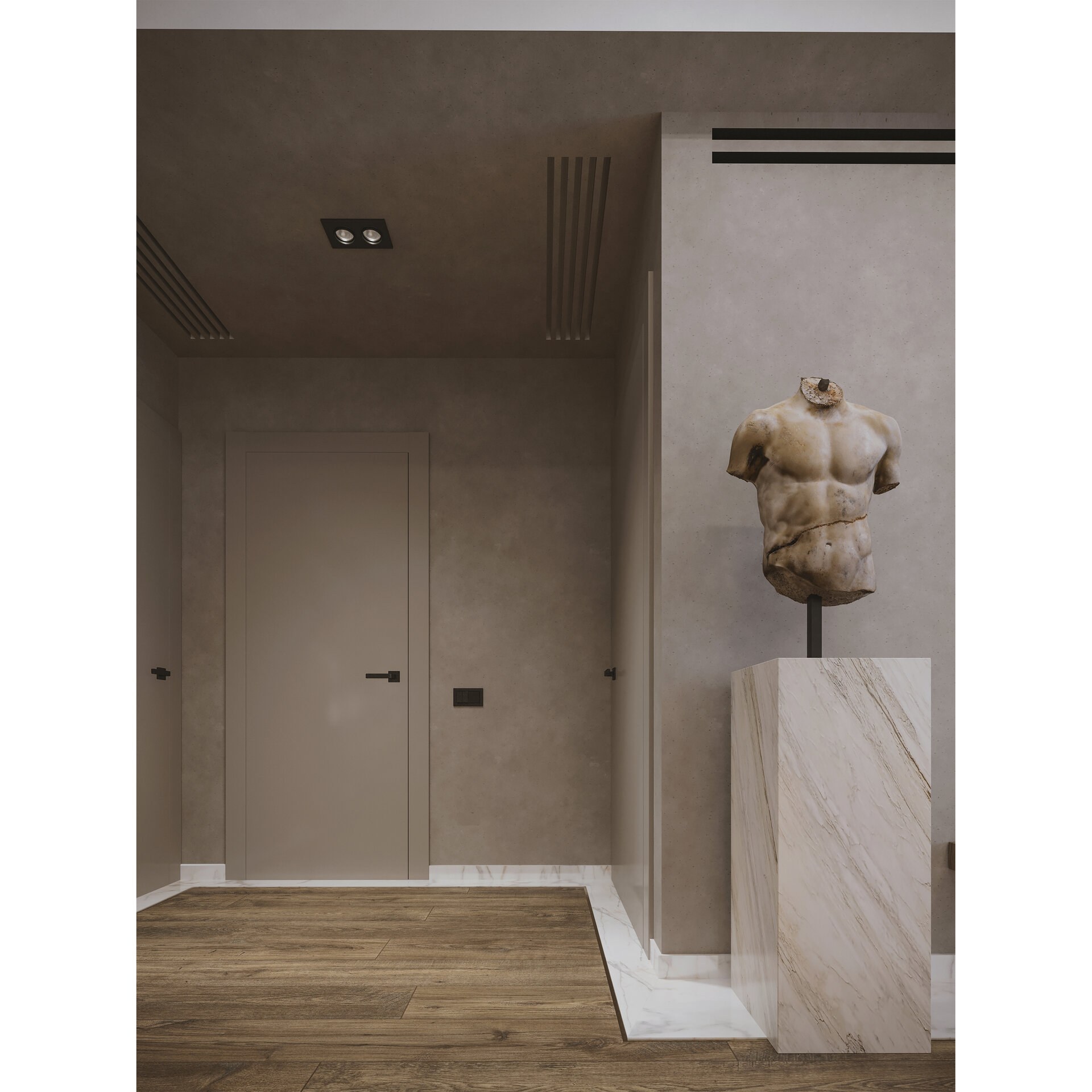 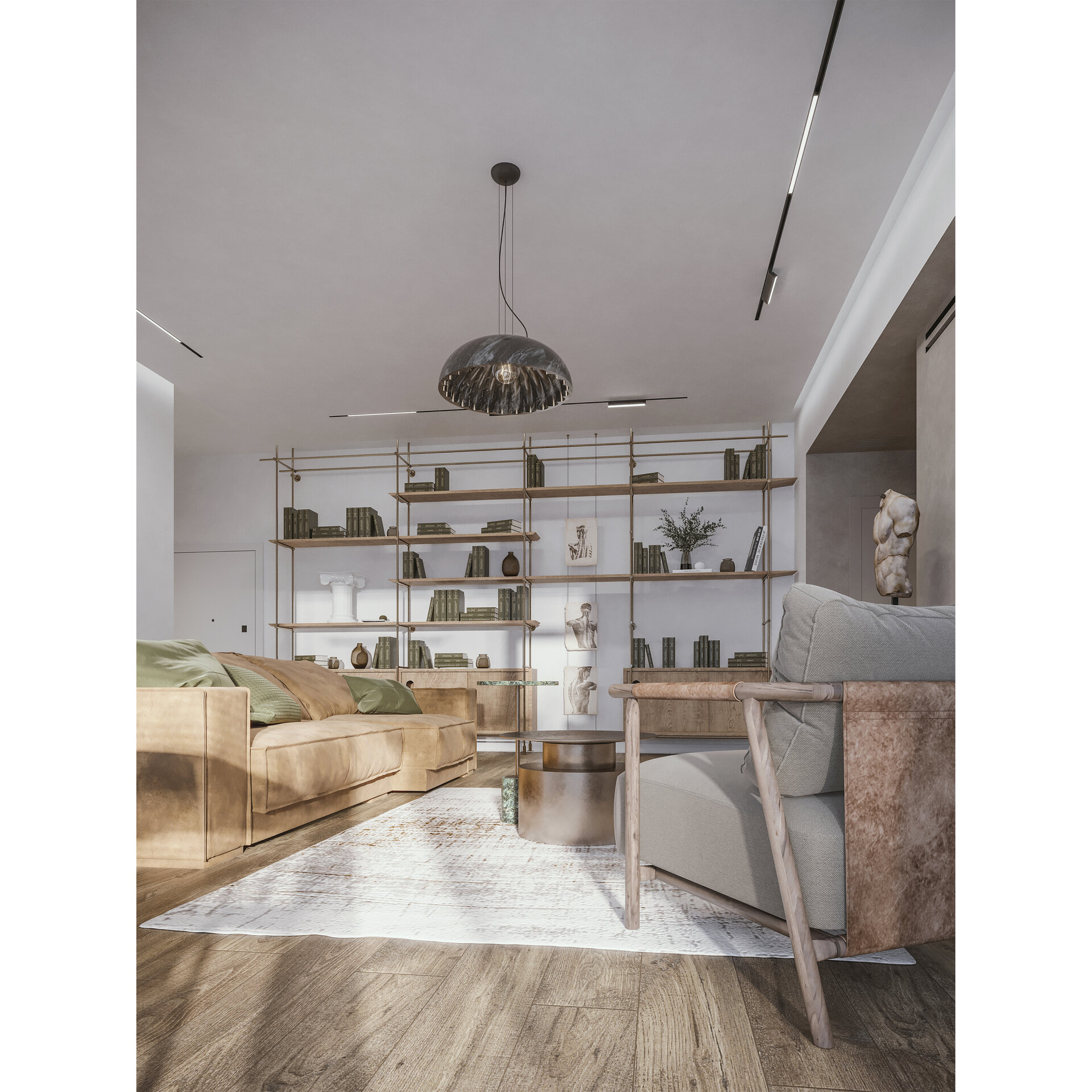 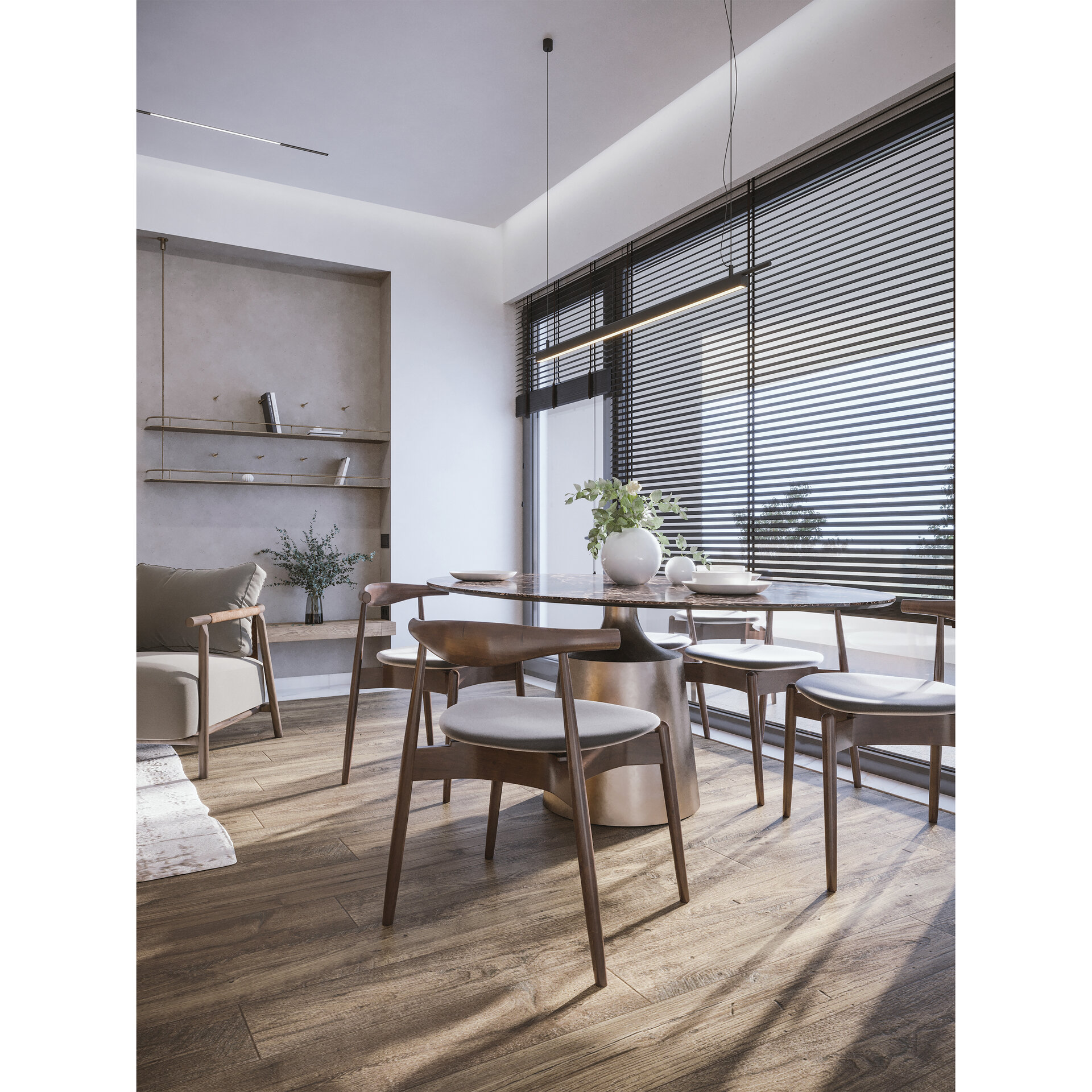 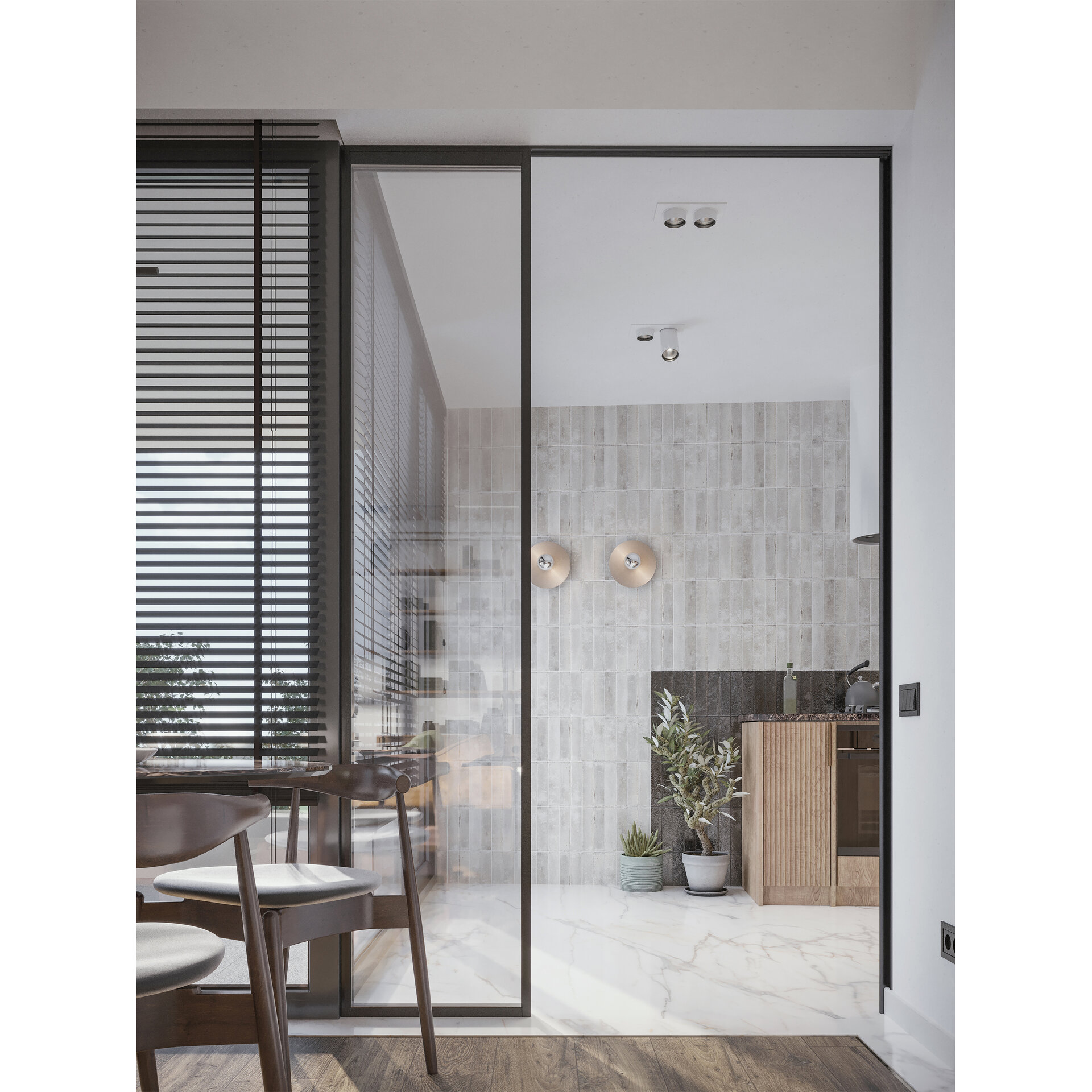 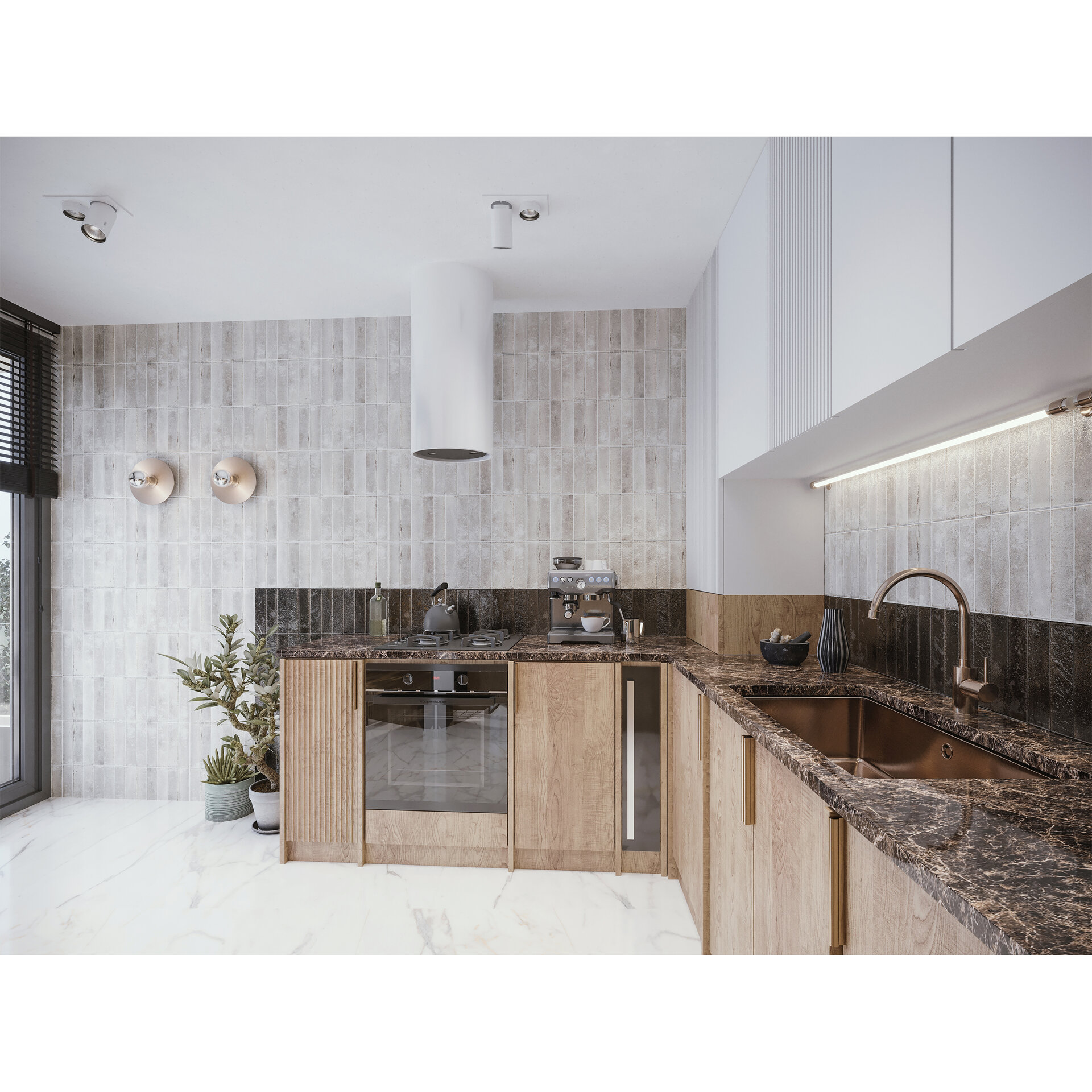 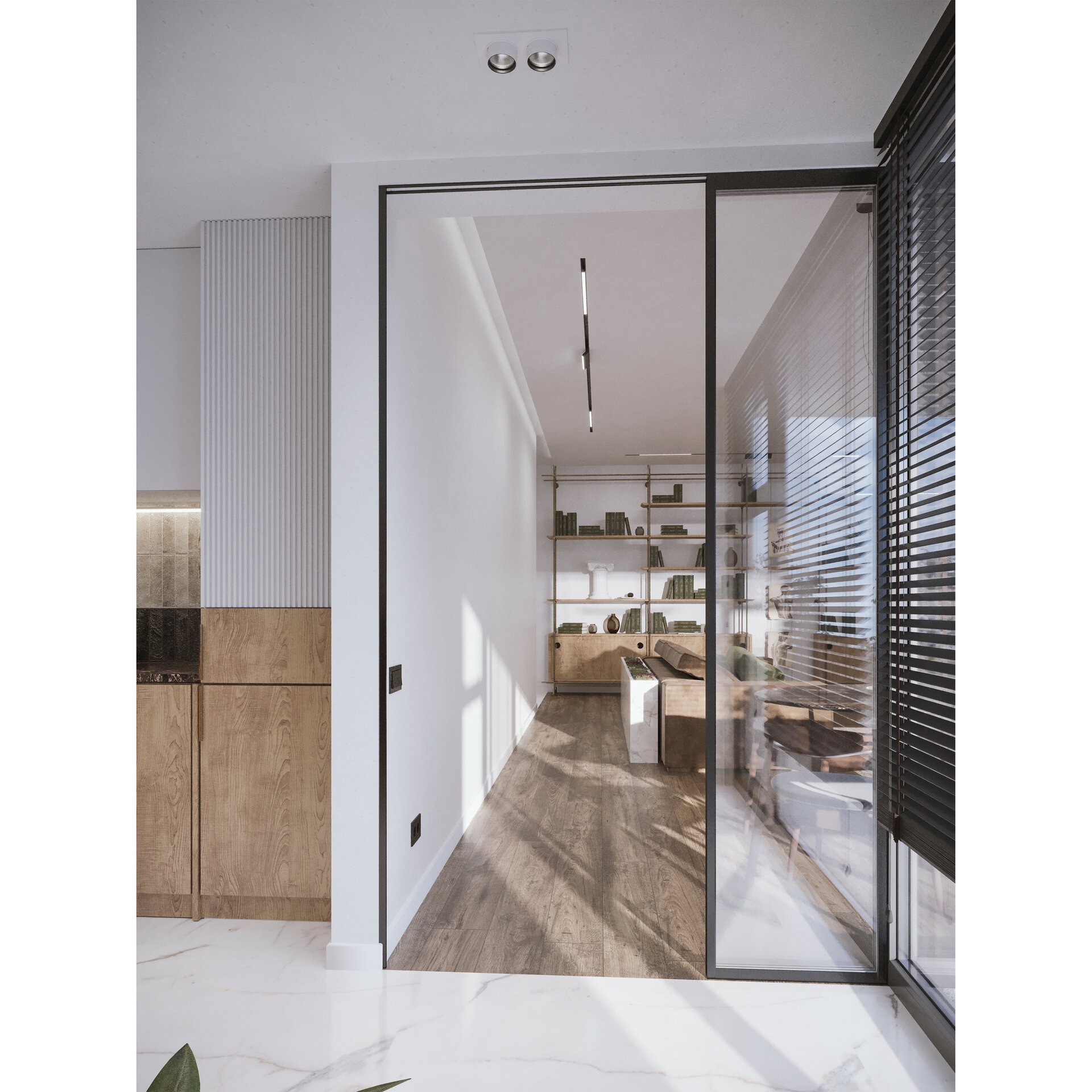 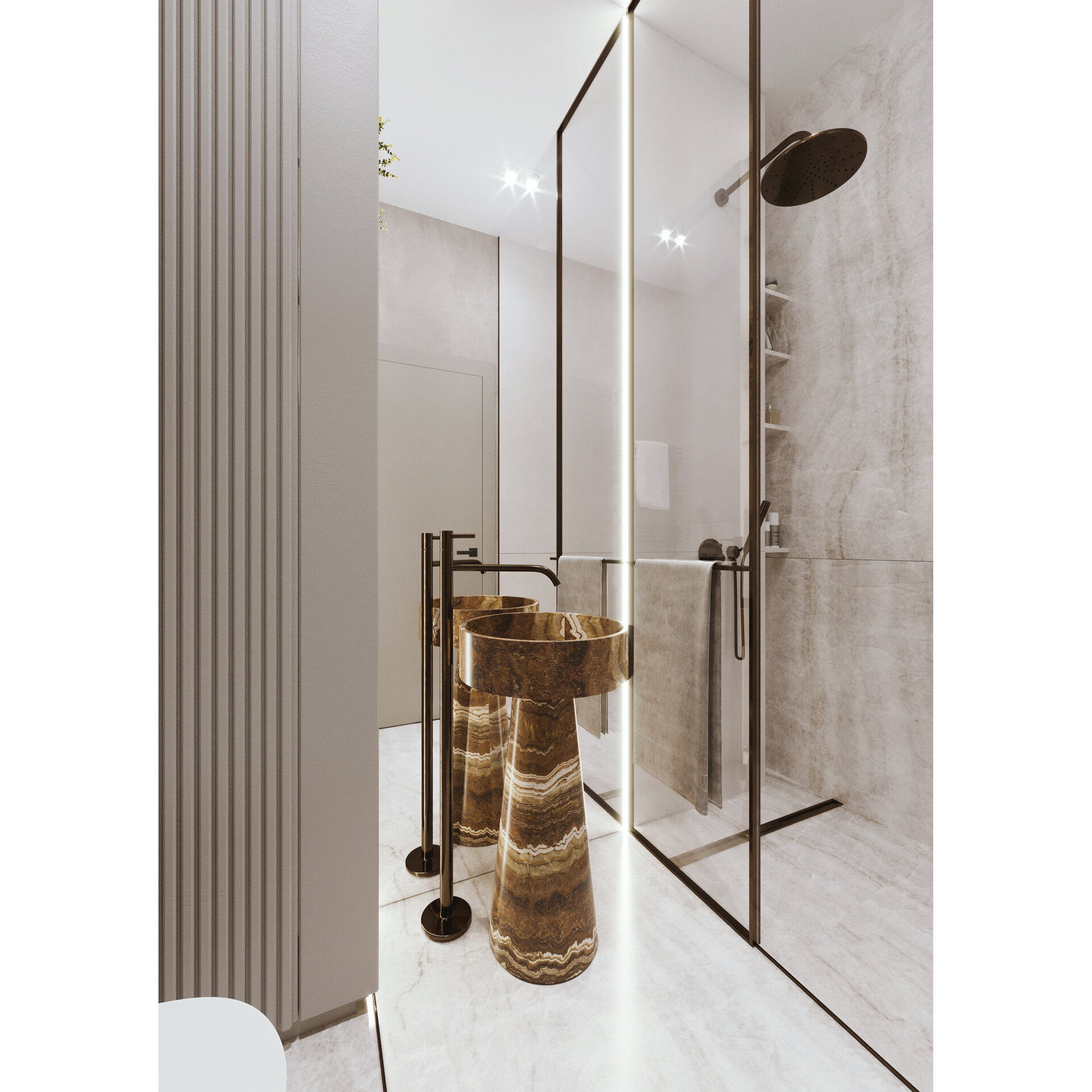 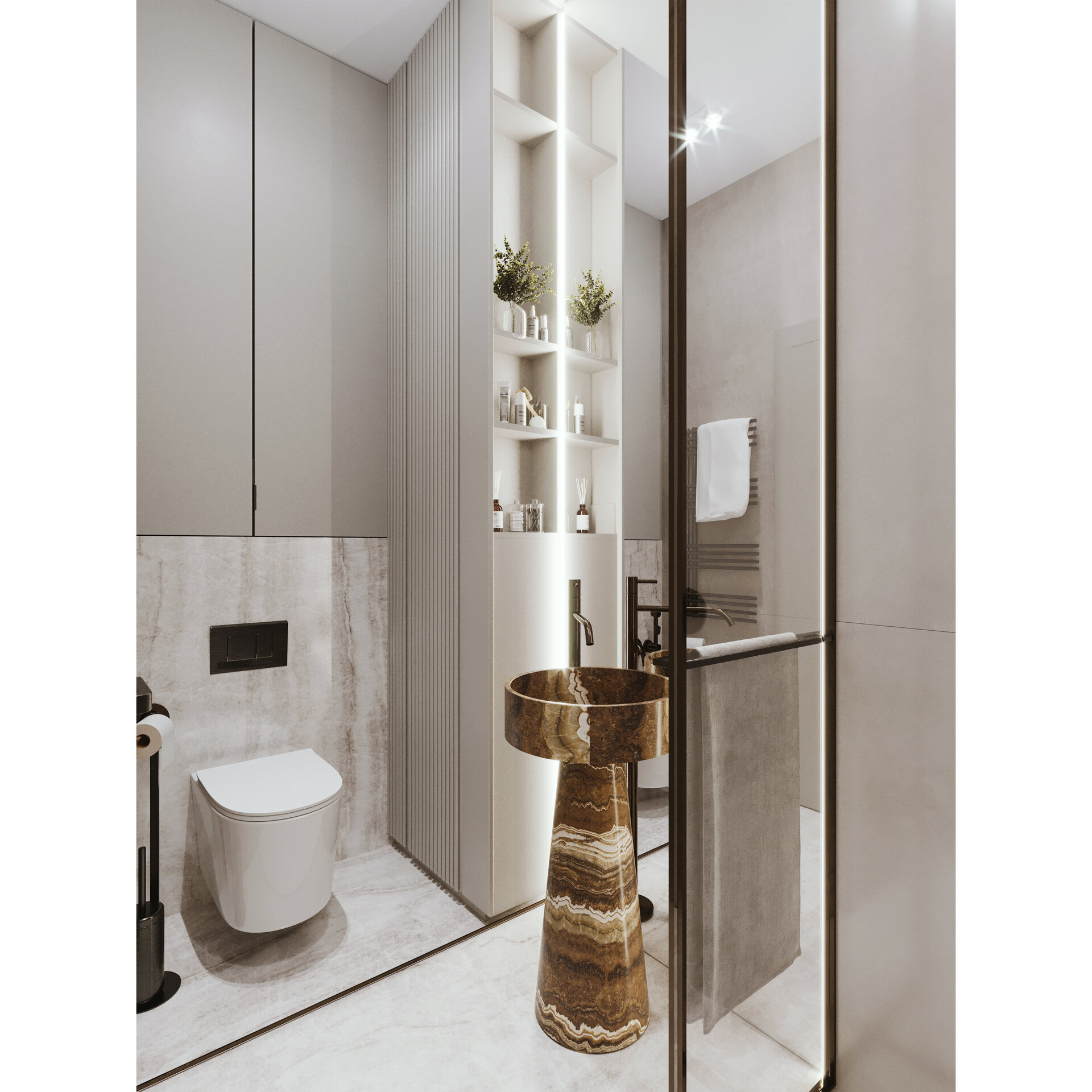 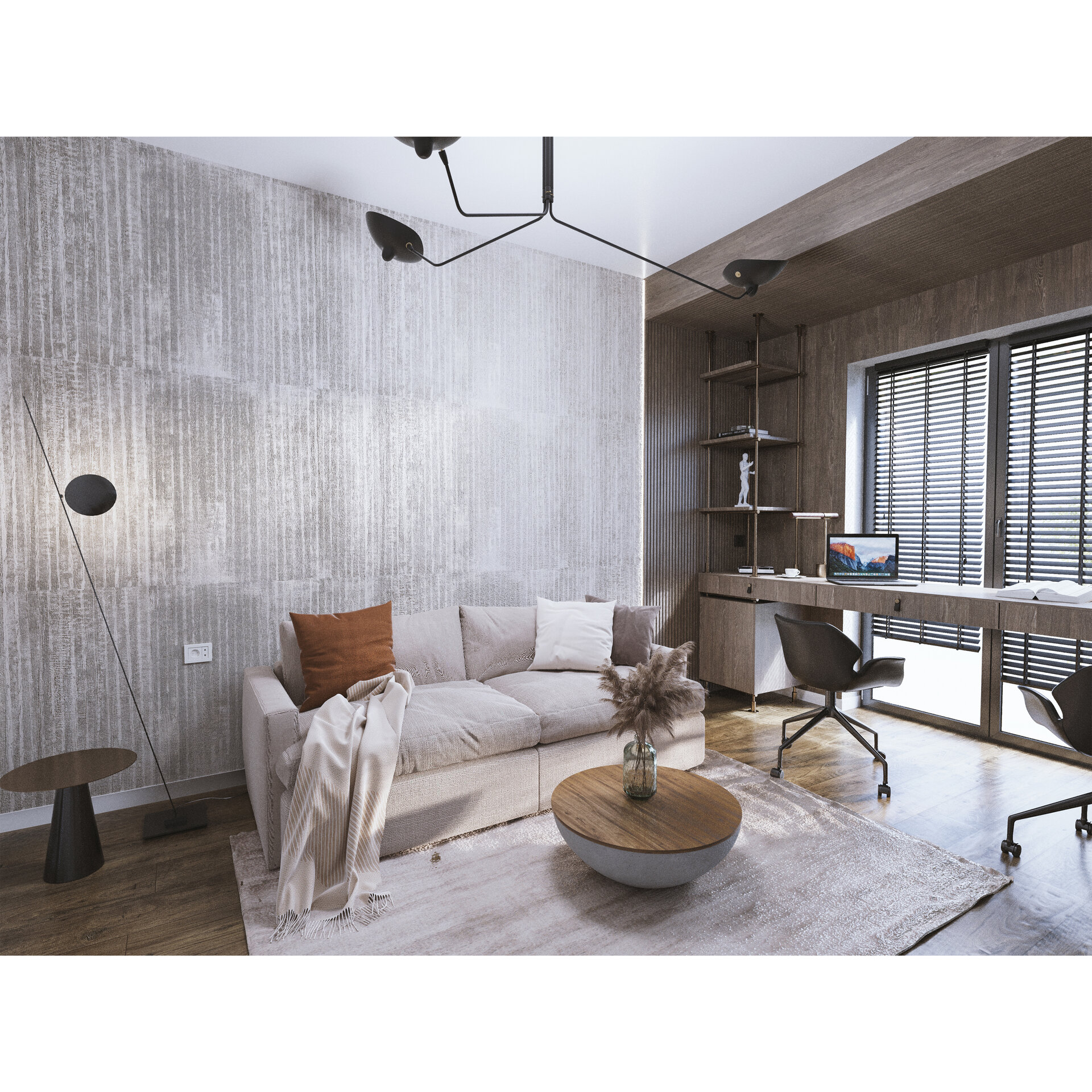 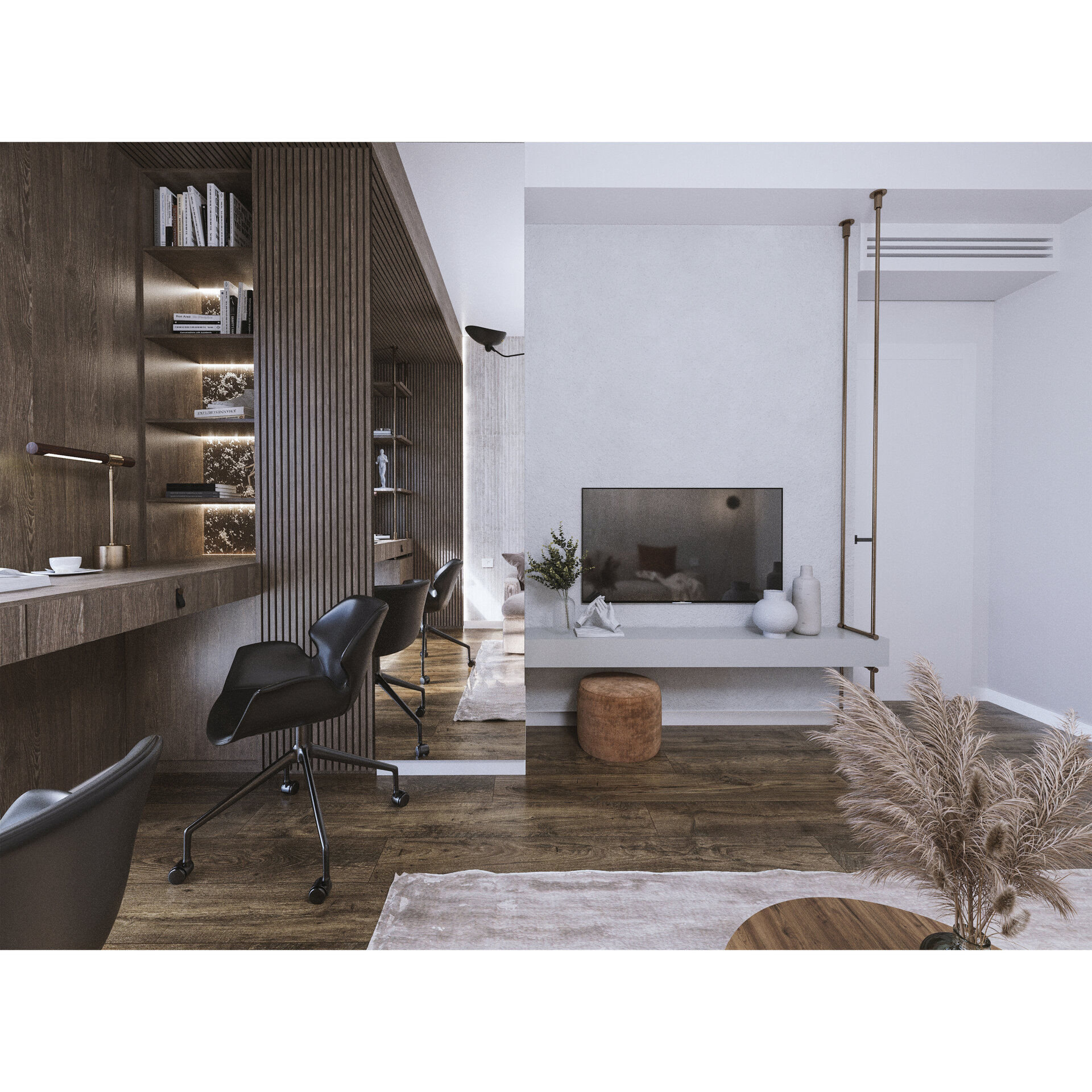 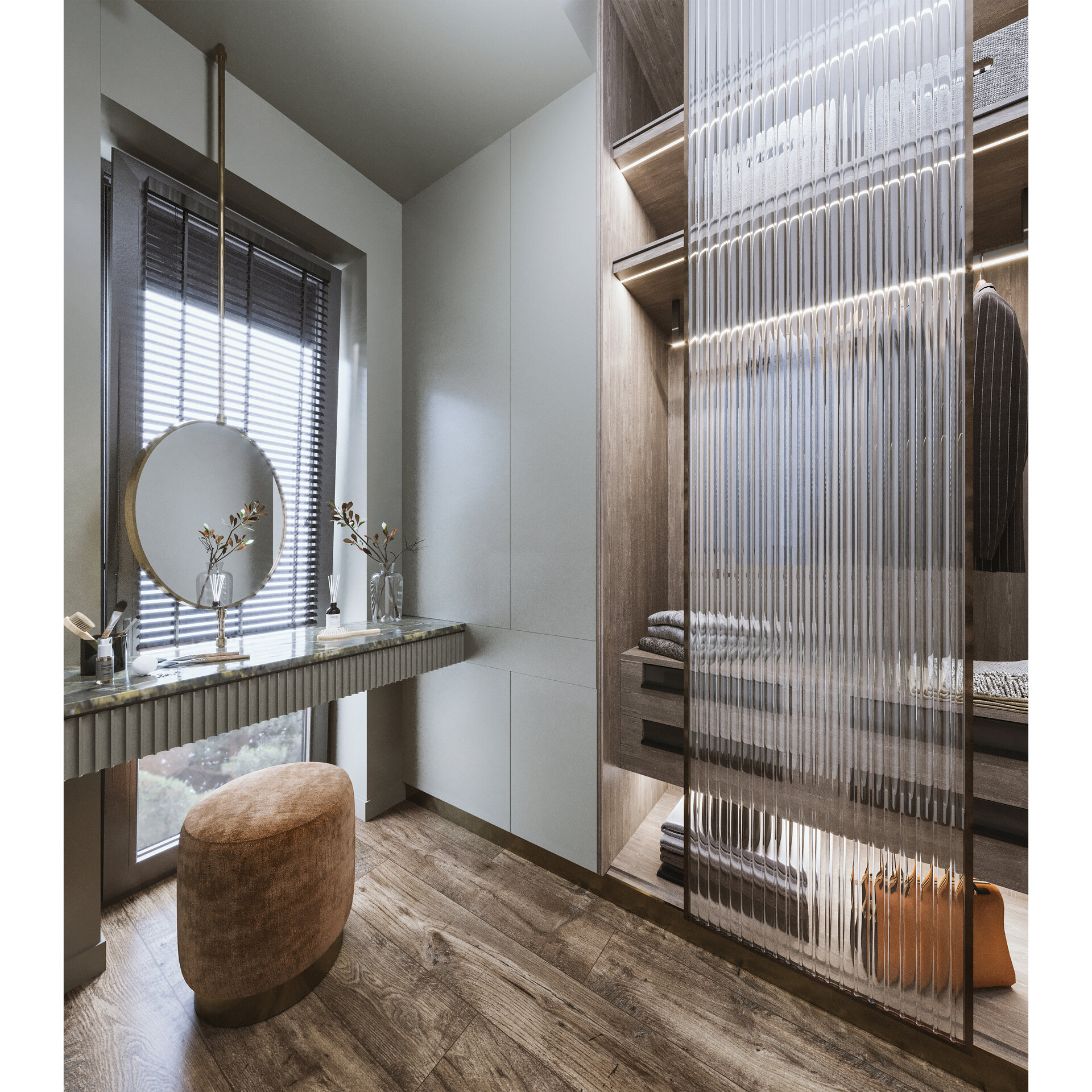 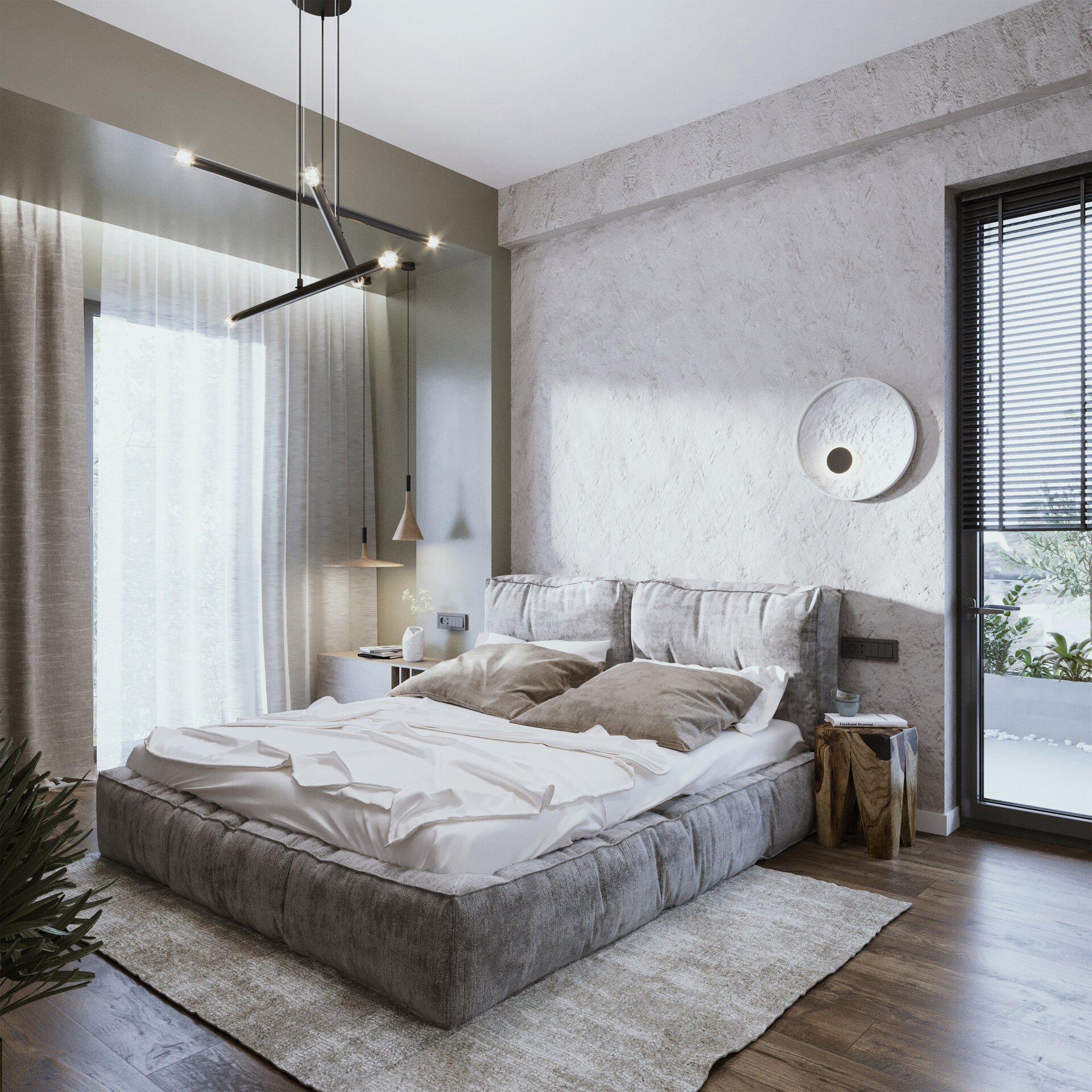 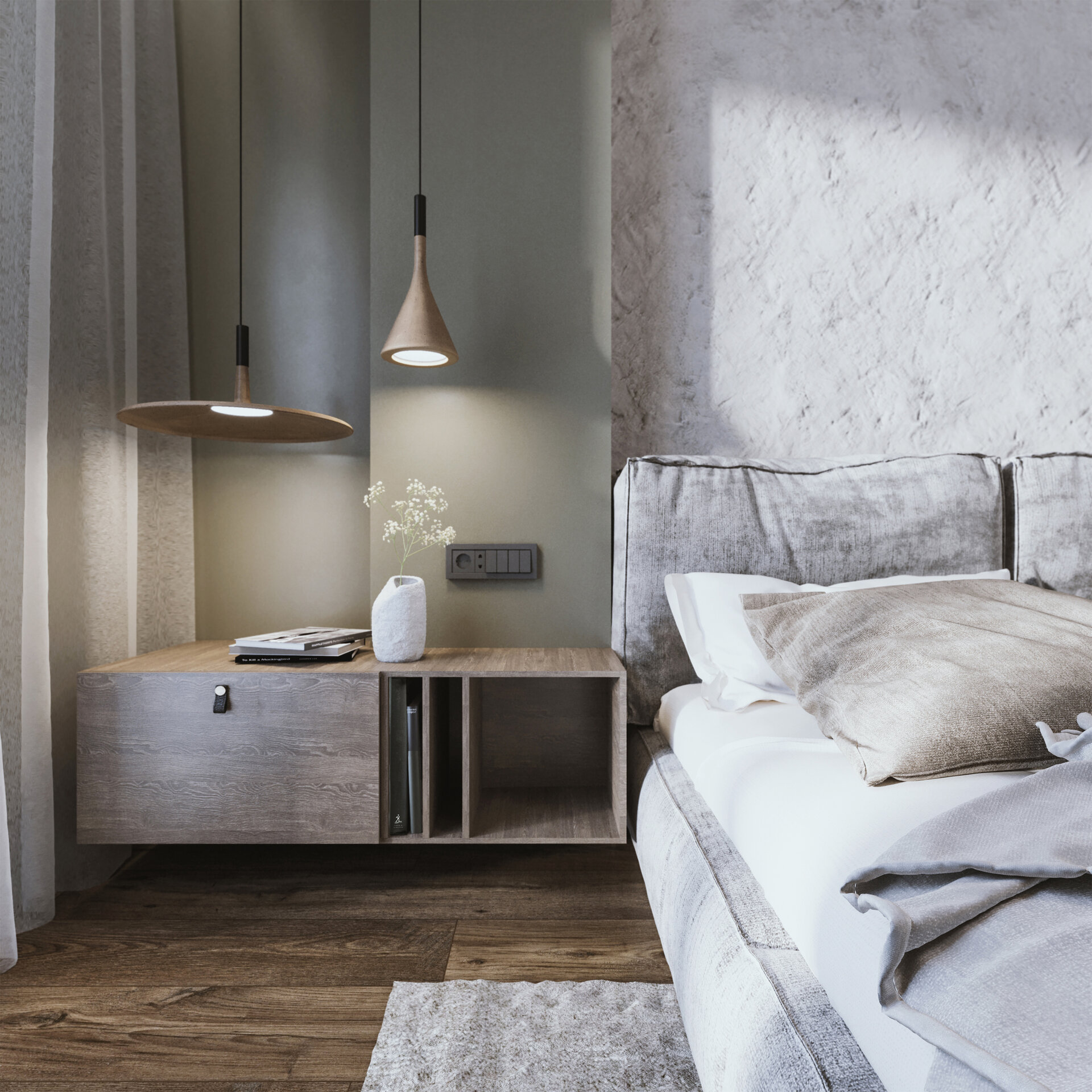 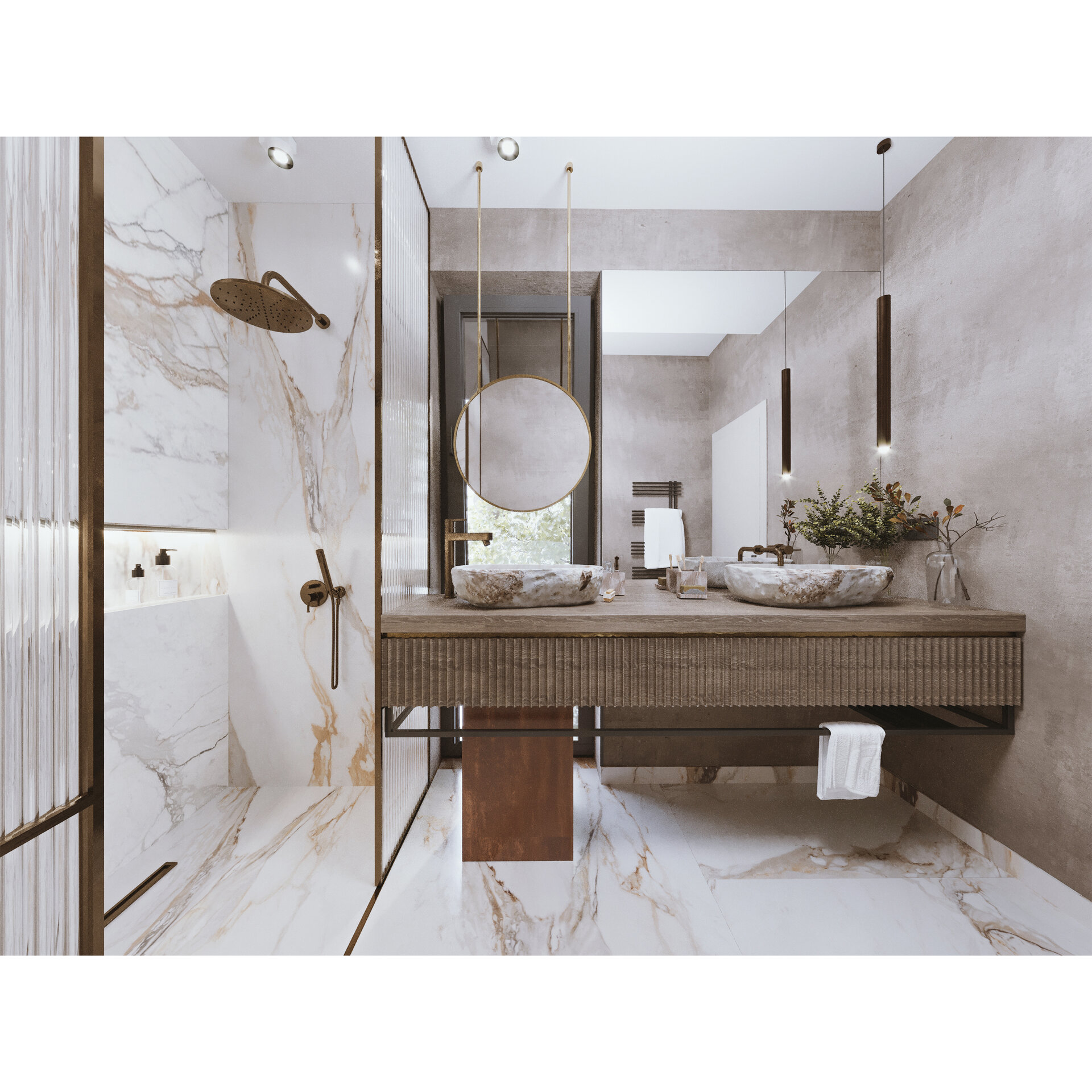 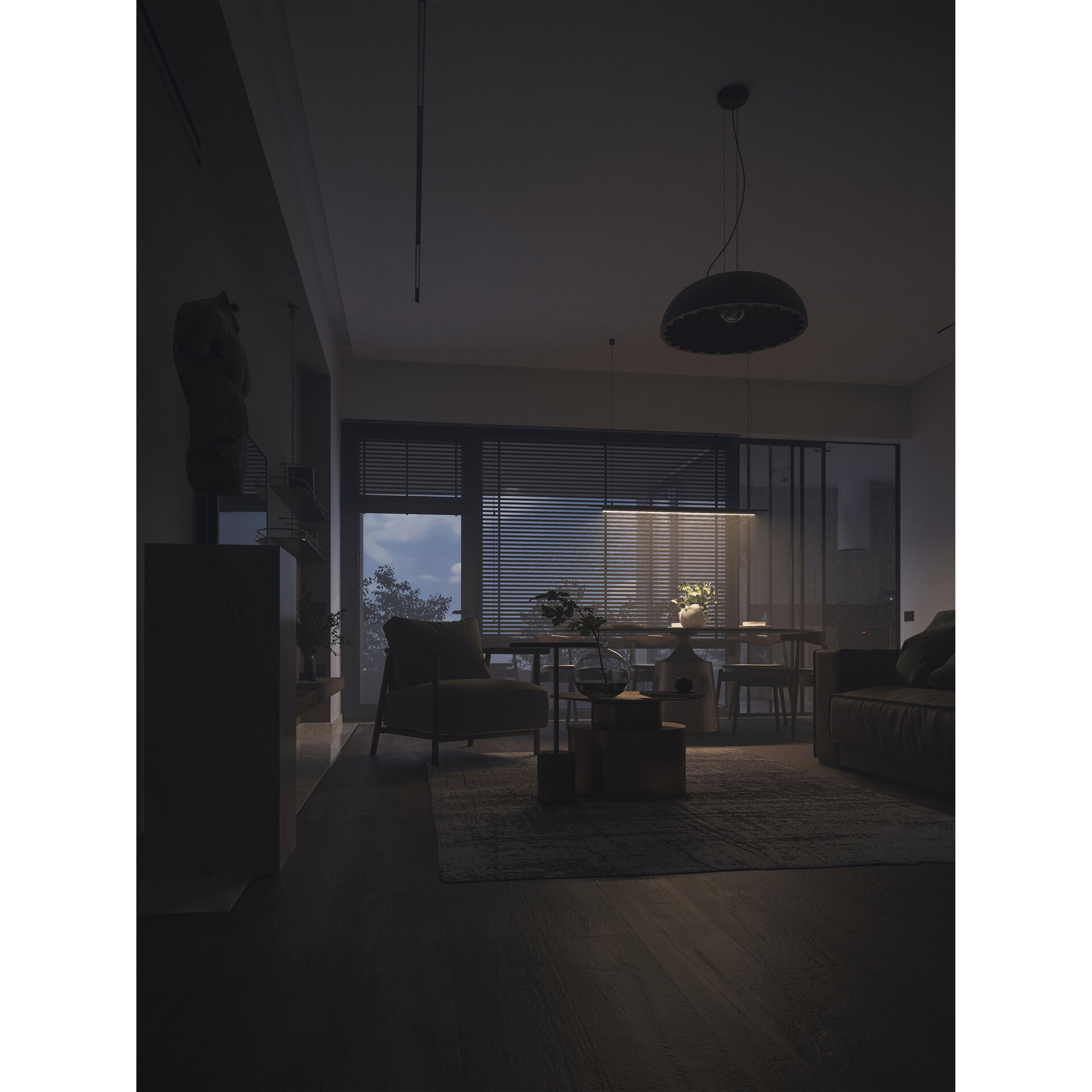