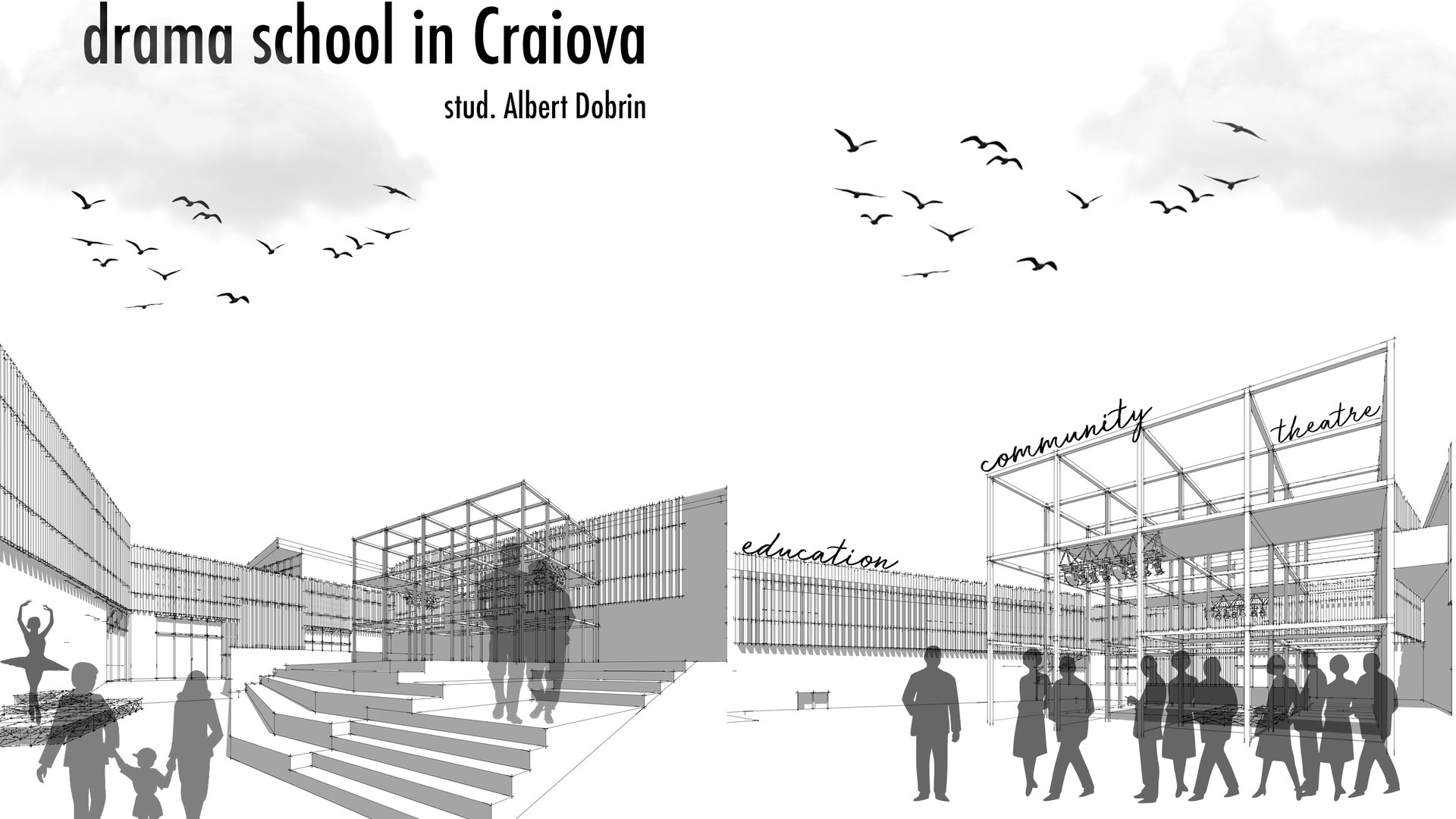 Drama school in Craiova Among the many types of architectural objects, theaters occupy a distinct place. A man’s perception of it, or we could even call it a preconception which appears by contemplating a spiritual program and of architecture that reveals itself in many directions, and the buildings which develop a complex network of functional structures and technologies, urban, social and even ideological functions. Instead of being based on design ideas from the conventional repertoire of modern objects and spaces, the program must be approached in temporal terms, looking for the solution to the problems that such a program can poses. The Drama school, like a Fun Palace, should be an entity whom in essence is defined by a continuous change and evolution that allows multiple and indefinite uses. Like the scenography of a show, especially in the sphere of experimental theater, architecture can generate an improvisation of constant activities, which are in a continuous process of construction, dismantling and reassembly. This will create a framework in which people in the community could gather their own learning environments and leisure and to meet cultural needs, where people could escape the daily routine and embark on a journey the discovery of creativity. School curriculum can be considered ad-hoc, determined by users, by it’s students, teachers or simple participants in this cultural space, but nevertheless, even without a certain program, the space and the school manage to self-regulate . The proposed site is located on an unoccupied piece of land in the central area of ​​Craiova, which is currently abandoned by both authorities and the community but with an important urban value and connected to the cultural network of the city. The choice was not an arbitrary one, in the city there is a theatre school, but it operates in several locations of the University of Craiova and is currently looking for a solution for a permanent headquarters. Also, Craiova is linked to the cultural life for more than 150 years, and feels the need for a new space to supplement the Marin Sorescu National Theater building, especially during the William Shakespeare Festival, when the need for theatre halls and alternative spaces is an issue that sometimes limits the number of theatres invited. Advantages of site positioning: - Location in the central area of ​​the city - Accessibility to public transport - Car accessibility - Proximity to cultural elements in the city - Proximity of educational institutions Essential for the good functioning of such an institution in the 21st century is its integration into the community, and the integration of the community into the educational process, both as participation in performances and related activities. Thus, the ground floor is almost entirely dedicated to the public, and in direct connection with the public space through permeable delimitations. Architecturally I proposed the use of a representation space known as black box which is the most easily adapted to all the needs of a school of drama, it can accommodate several configuration of the hall required for a school needs of performing arts . In addition, the hall can be opened in two directions so it is linked the interior courtyard where it can work with alternative representation spaces and the amphitheater, and also towards the foyer and Matei Basarab street, creating a route between the city and the theatrical space. Also, in the basement, it is proposed to create three media halls or for small shows, which can be offered free of charge to students or students who wish to perform a theater performance. The development of the project also proposes the creation of a route that can temporarily join two green areas near the site, thus creating a link between the space representation of the courtyard and the Parish Park where you can build a temporary amphitheater during festivals (Shakespeare, TNT ). The route is to be planned through the gardens and inner courtyards of the properties separating the two points. This route is temporary and can provide a chance for development for the area as well as for residents who make available a piece of their yard.