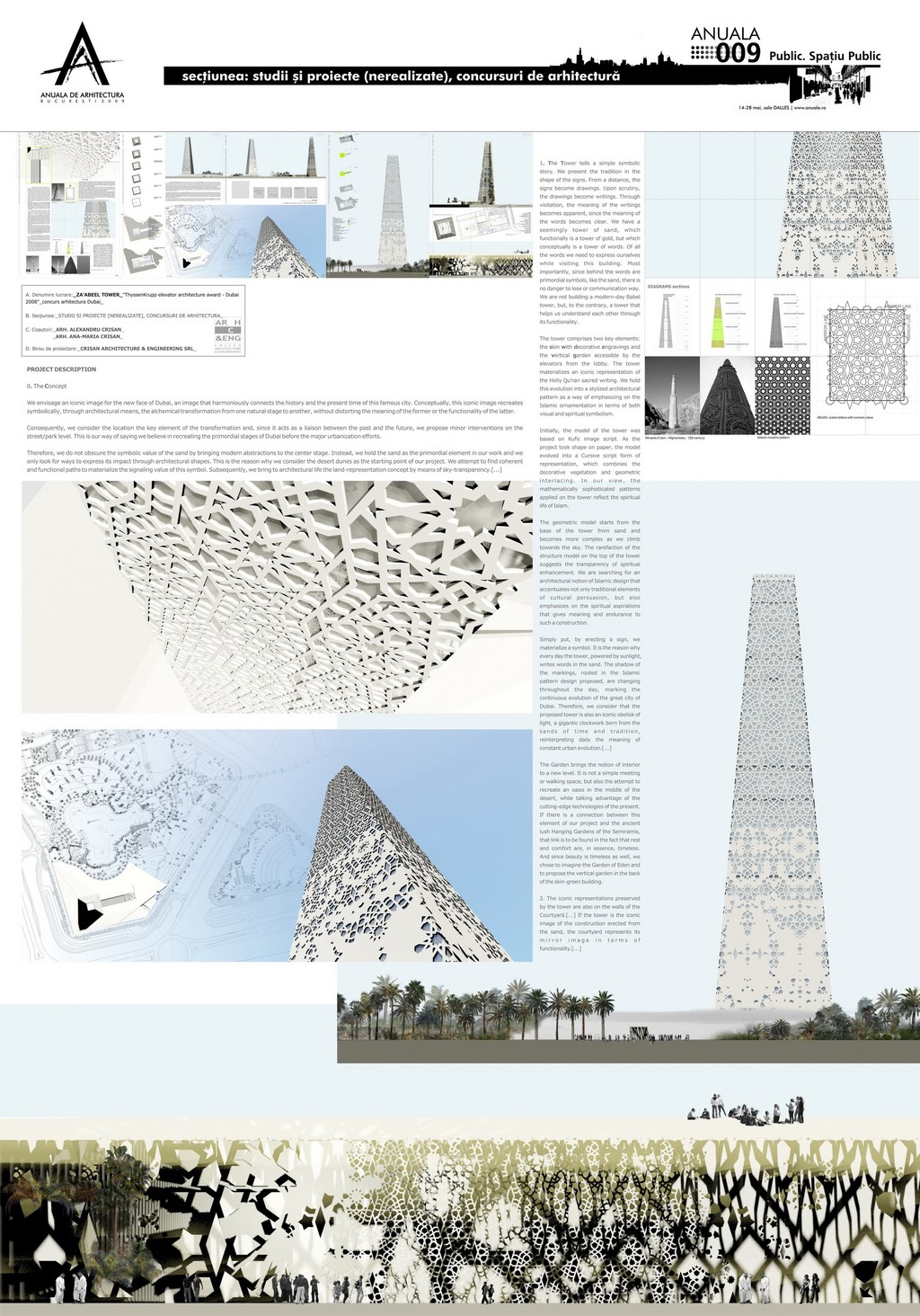 We envisage an iconic image for the new face of Dubai, an image that harmoniously connects the history and the present time of this famous city. Conceptually, this iconic image recreates symbolically, through architectural means, the alchemical transformation from one natural stage to another, without distorting the meaning of the former or the functionality of the latter.

Consequently, we consider the location the key element of the transformation and, since it acts as a liaison between the past and the future, we propose minor interventions on the street/park level. This is our way of saying we believe in recreating the primordial stages of Dubai before the major urbanization efforts.

Therefore, we do not obscure the symbolic value of the sand by bringing modern abstractions to the center stage. Instead, we hold the sand as the primordial element in our work and we only look for ways to express its impact through architectural shapes. This is the reason why we consider the desert dunes as the starting point of our project. We attempt to find coherent and functional paths to materialize the signaling value of this symbol. Subsequently, we bring to architectural life the land-representation concept by means of sky-transparency.[...]

1. The Tower tells a simple symbolic story. We present the tradition in the shape of the signs. From a distance, the signs become drawings. Upon scrutiny, the drawings become writings. Through visitation, the meaning of the writings becomes apparent, since the meaning of the words becomes clear. We have a seemingly tower of sand, which functionally is a tower of gold, but which conceptually is a tower of words. Of all the words we need to express ourselves while visiting this building. Most importantly, since behind the words are primordial symbols, like the sand, there is no danger to lose or communication way. We are not building a modern-day Babel tower, but, to the contrary, a tower that helps us understand each other through its functionality.

The tower comprises two key elements: the skin with decorative engravings and the vertical garden accessible by the elevators from the lobby. The tower materializes an iconic representation of the Holly Qu'ran sacred writing. We hold this evolution into a stylized architectural pattern as a way of emphasizing on the Islamic ornamentation in terms of both visual and spiritual symbolism.

Initially, the model of the tower was based on Kufic image script. As the project took shape on paper, the model evolved into a Cursive script form of representation, which combines the decorative vegetation and geometric interlacing. In our view, the mathematically sophisticated patterns applied on the tower reflect the spiritual life of Islam.

The geometric model starts from the base of the tower from sand and becomes more complex as we climb towards the sky. The rarefaction of the structure model on the top of the tower suggests the transparency of spiritual enhancement. We are searching for an architectural notion of Islamic design that accentuates not only traditional elements of cultural persuasion, but also emphasizes on the spiritual aspirations that gives meaning and endurance to such a construction.

Simply put, by erecting a sign, we materialize a symbol. It is the reason why every day the tower, powered by sunlight, writes words in the sand. The shadow of the markings, rooted in the Islamic pattern design proposed, are changing throughout the day, marking the continuous evolution of the great city of Dubai. Therefore, we consider that the proposed tower is also an iconic obelisk of light, a gigantic clockwork born from the sands of time and tradition, reinterpreting daily the meaning of constant urban evolution.[...]

The Garden brings the notion of interior to a new level. It is not a simple meeting or walking space, but also the attempt to recreate an oasis in the middle of the desert, while talking advantage of the cutting-edge technologies of the present. If there is a connection between this element of our project and the ancient lush Hanging Gardens of the Semiramis, that link is to be found in the fact that rest and comfort are, in essence, timeless. And since beauty is timeless as well, we chose to imagine the Garden of Eden and to propose the vertical garden in the back of the skin-green building.

2. The iconic representations preserved by the tower are also on the walls of the Courtyard.[...] If the tower is the iconic image of the construction erected from the sand, the courtyard represents its mirror image in terms of functionality.[...]