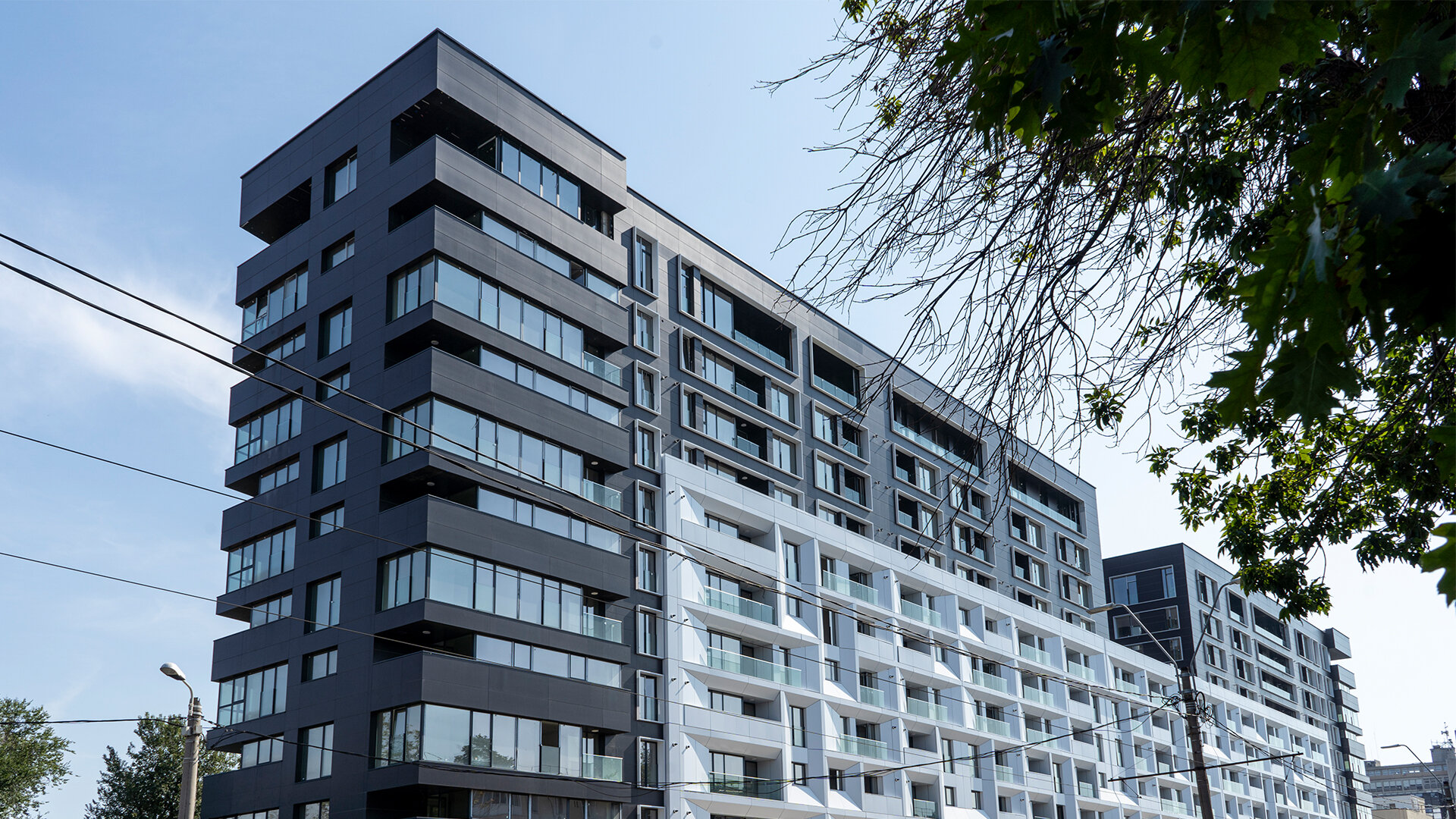 (102 The Address) Collective residential houses with commercial spaces at groundfloor 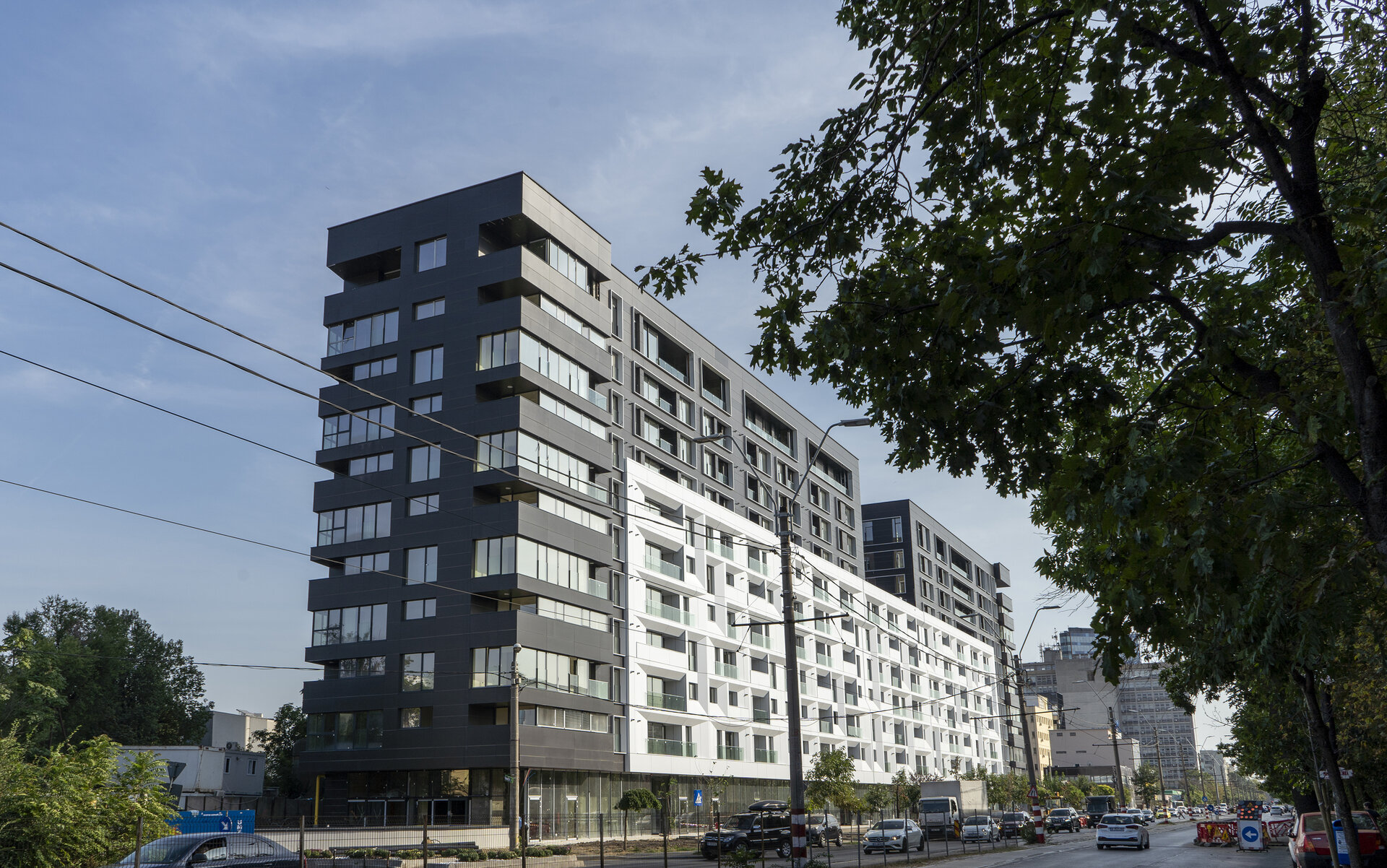 Barbu Vacarescu - 102 the Address.
Located between Barbu Vacarescu Boulevard and Ramuri Tei Street / Eiffel Tower, the building is integrated in an existing destructured area, a former industrial region, on a land intended for waste collection. The nature of the land determined the execution of special foundation solutions, the foundation being made of a piloted screed and slurry walls of 60-80cm. The special ground conditions as well as the need for technical spaces determined the existence of the three basements.
The shape of the land generated the proposed volume in an attempt to maximize the inhabited area as often happens in Bucharest. The distance from the boulevard was determined by the intention of not forming a passage corridor, the space being addressed to pedestrians, having as function commercial spaces on the ground floor. All these commercial spaces have a double orientation (windows) in the perspective of the further development of the industrial area behind the land.
The volumetric conformation of the building ensures the density of the tissue, the construction being made up of two accents between which there is a building body that unites them. The three bodies of different heights diminish the massiveness of the construction, keeping at the same time the continuous front towards Barbu Vacarescu Blvd. The building is composed of 3 structural sections: 2 sections with height regime 3B + Gf + 10F to the north and south and one with height regime 3B + Gf + 6F between them.
With a footprint of 3.320sqm and an above-ground area of approximately 30.500sqm, the complex includes 278 apartments, the space on the ground floor being intended entirely for commercial spaces. The parking is solved in the three basements, ensuring a need of over 475 places (necessary for the residential building and commercial spaces, together with visitors), on the ground floor there are 12 more parking spaces and a local traffic lane. Also, the basement provides most of the technical spaces necessary for operation. The total built underground area is 18.400sqm (3 basements).
Above the middle transom we proposed a circulating terrace, on the 7th floor, with double orientation, arranged in such a way that this space can be used by the tenants of the building. Such circulating terraces are also found on the 1st and 4th floor, towards the East side.
The orientation of the building is favorable - all apartments have East - West orientation. On the 2 long facades (east and west) there are mainly 2-room apartments. On the other sides, there are apartments with 3 and 4 rooms.
Near the land we have 2 parks - Circus Park, Floreasca Park.
A ventilated façade system was proposed for the building envelope, the cladding being made of two different materials, aluminum panel cladding (white) and ceramic cladding (dark gray), with metallic structure, thermal insulation with semi-rigid mineral wool and aluminum joinery and double glazing. On the ground floor, the commercial spaces from Barbu Vacarescu are closed with a transparent curtain wall, with a generous height of 5m.
Due to the privileged position in the city (near Floreasca and Dorobanti), this building was the project to enter the market of the developer from Turkey. Due to this fact, we opted for special shapes, difficult to make, made of good quality materials. 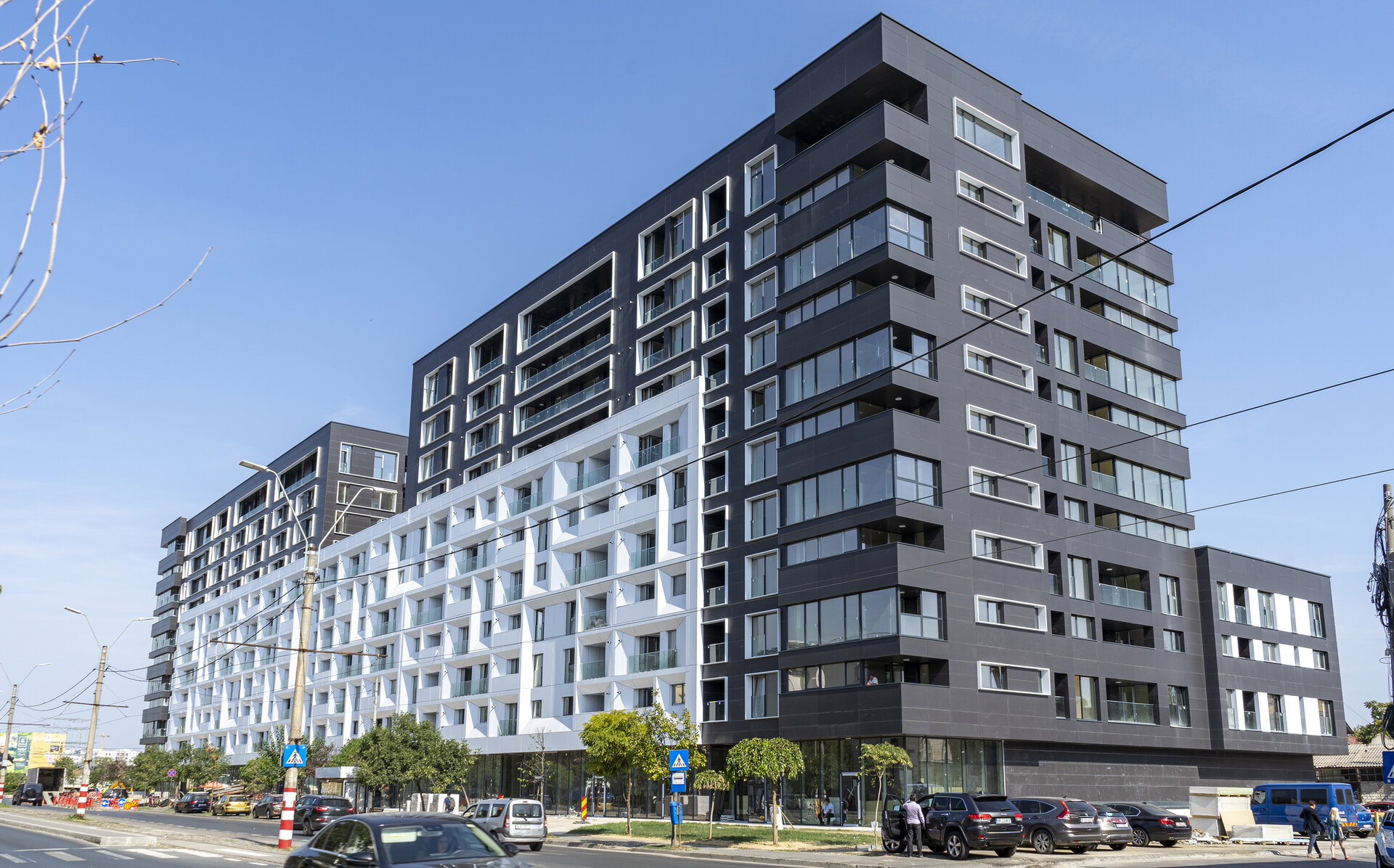 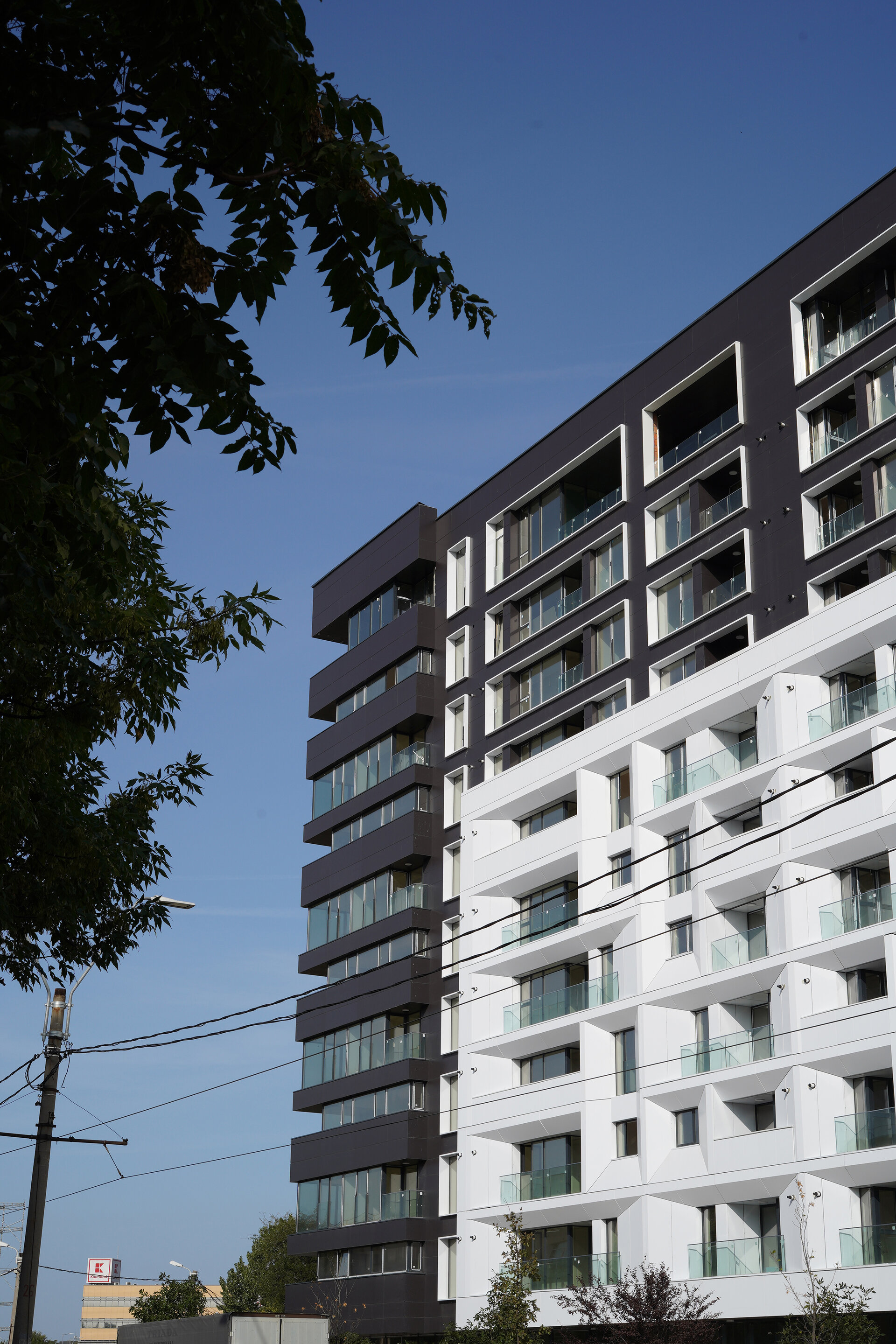 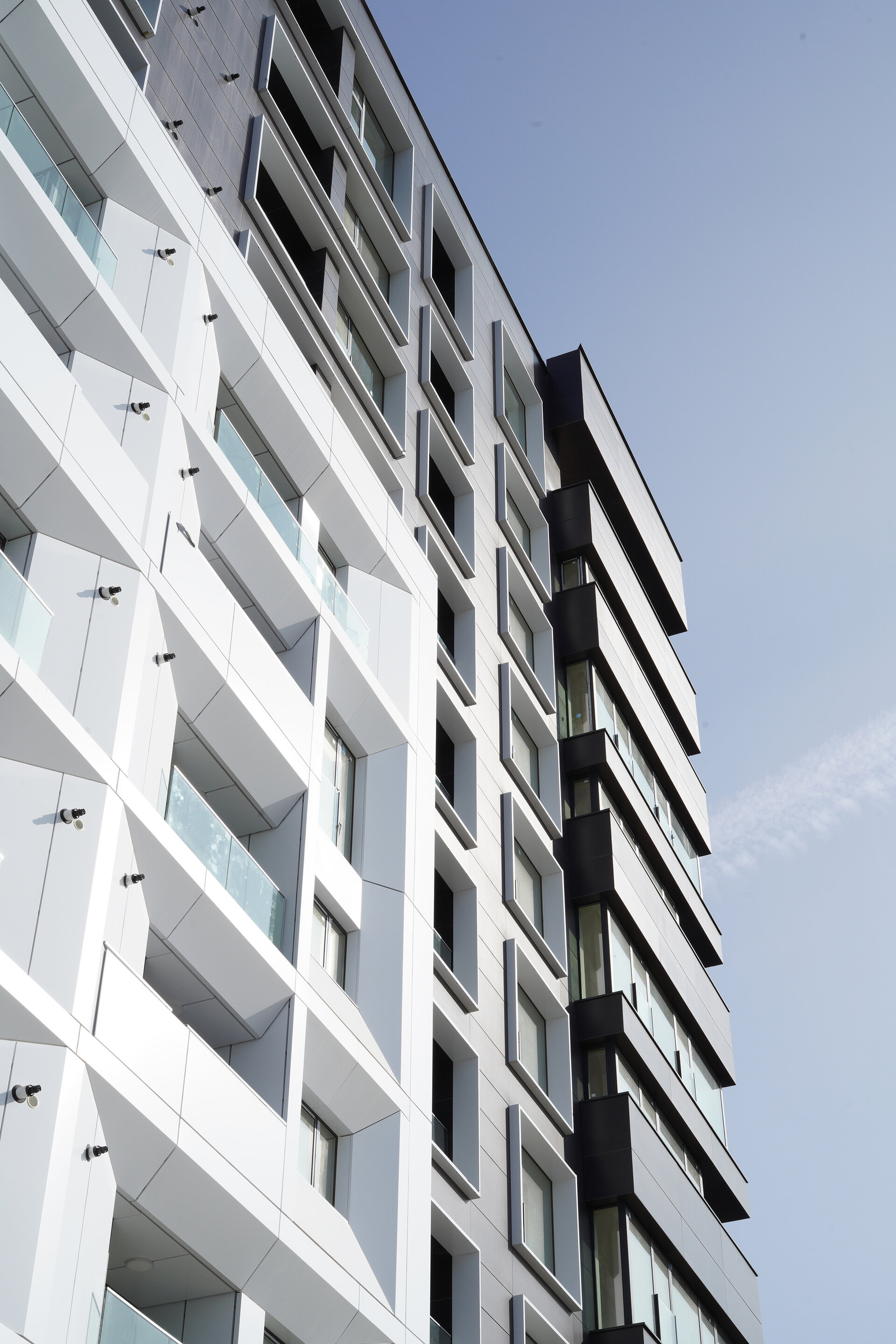 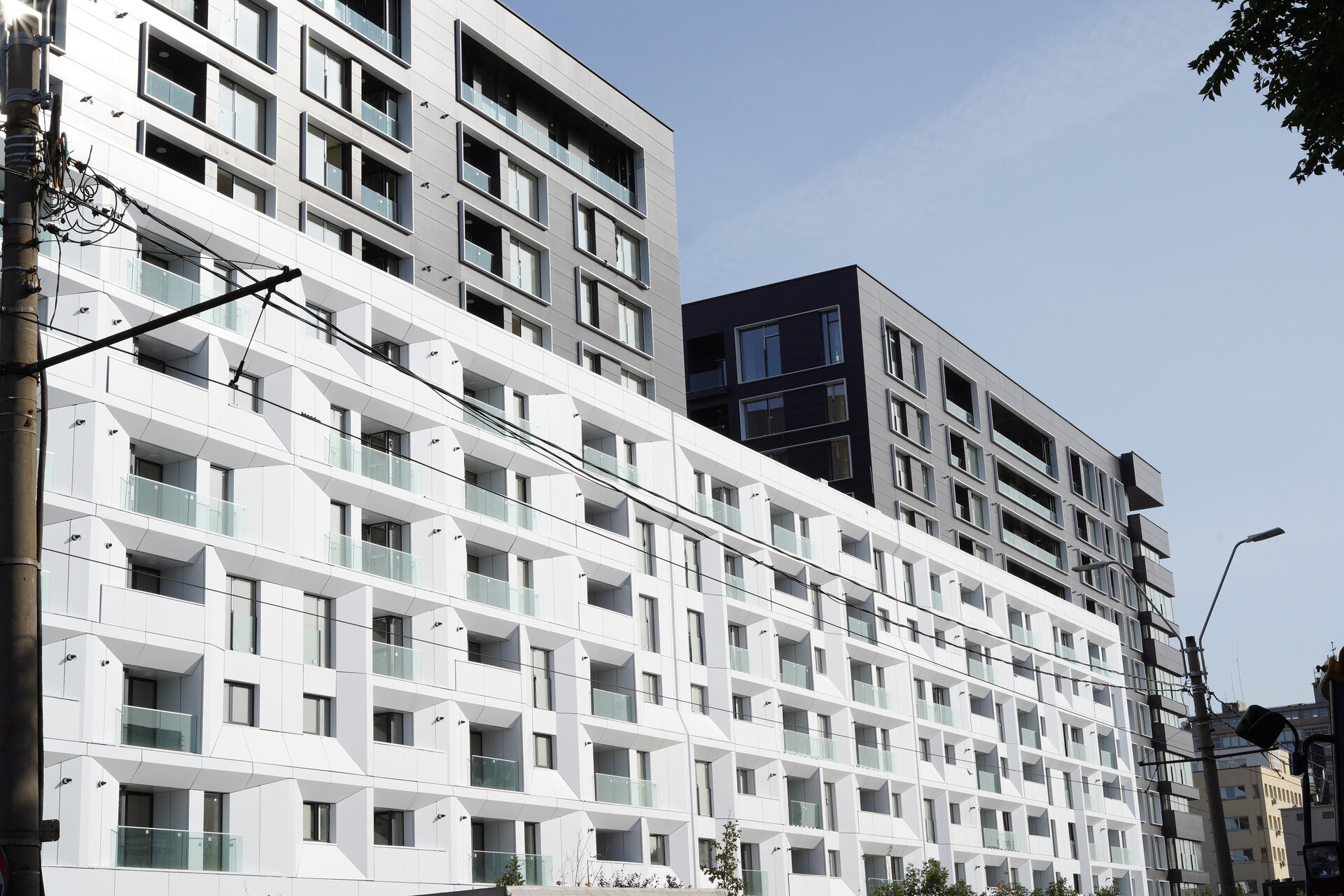 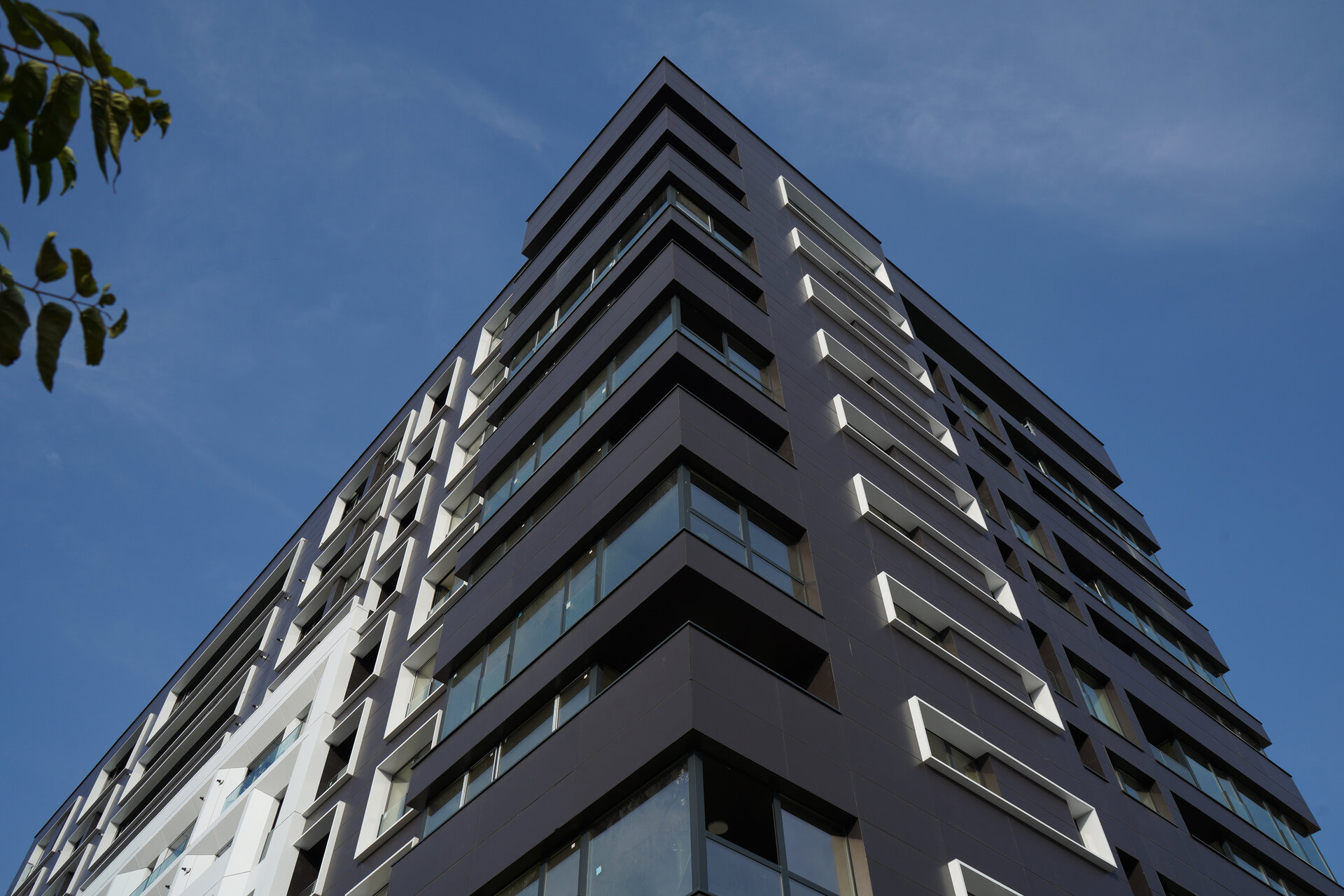 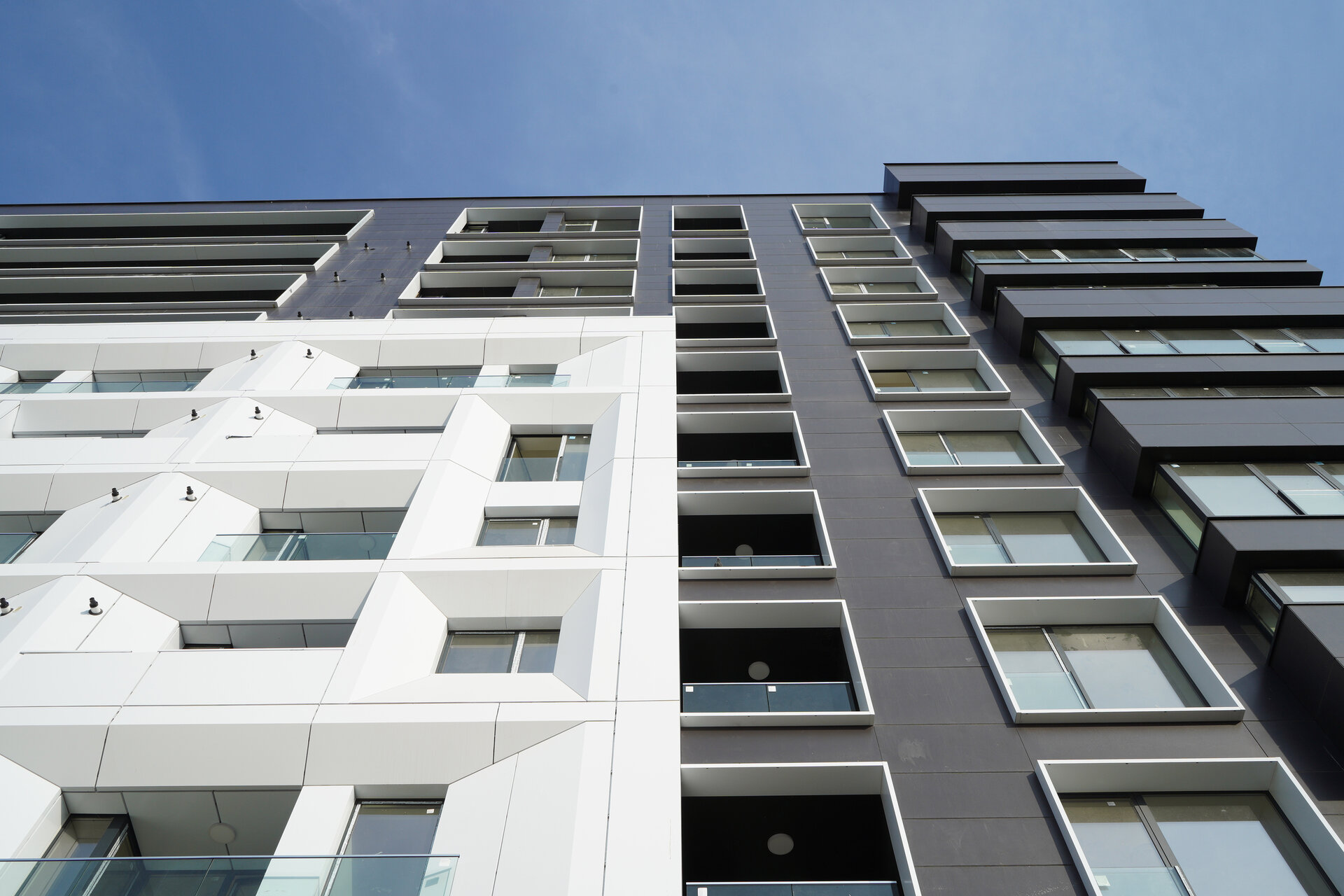 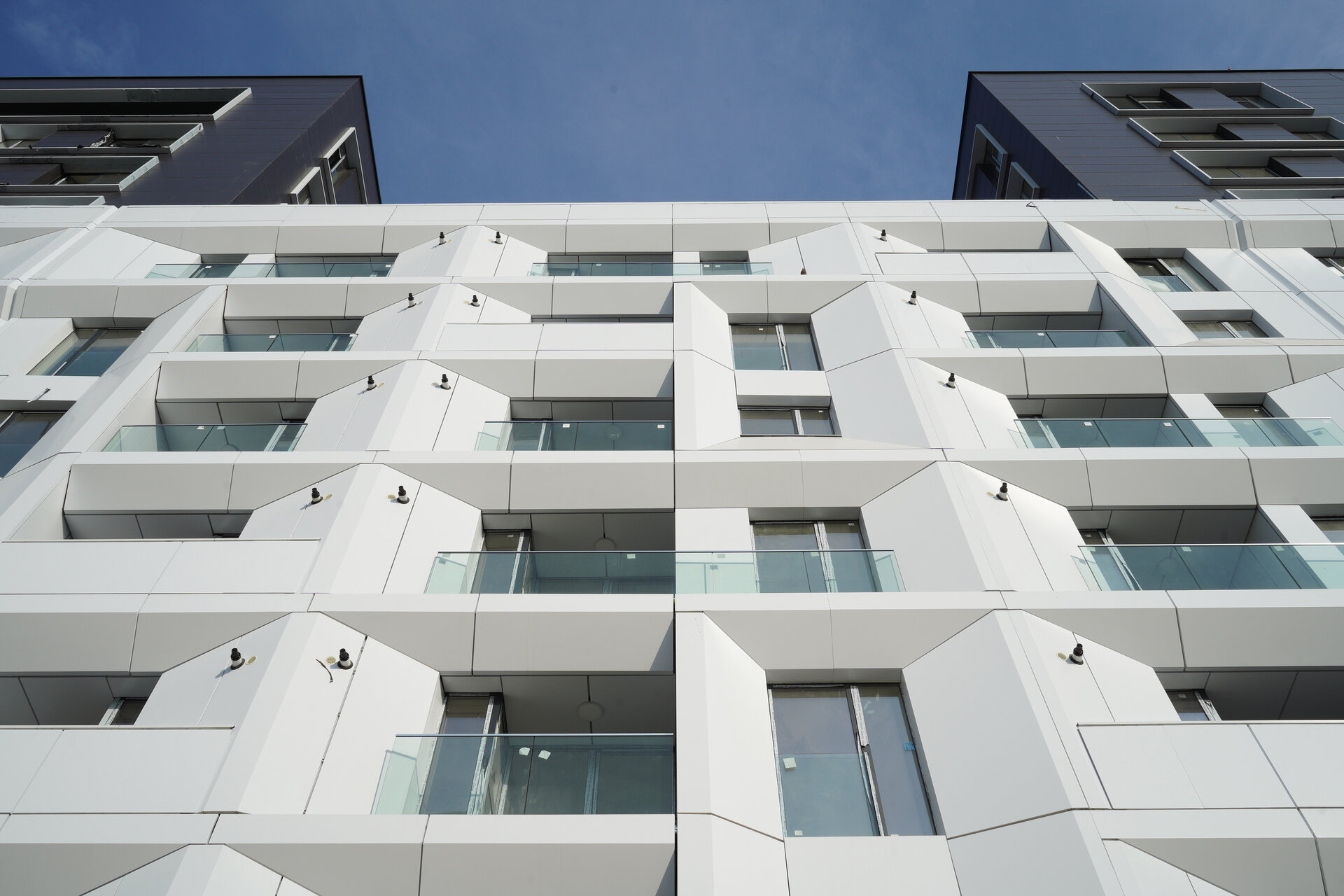 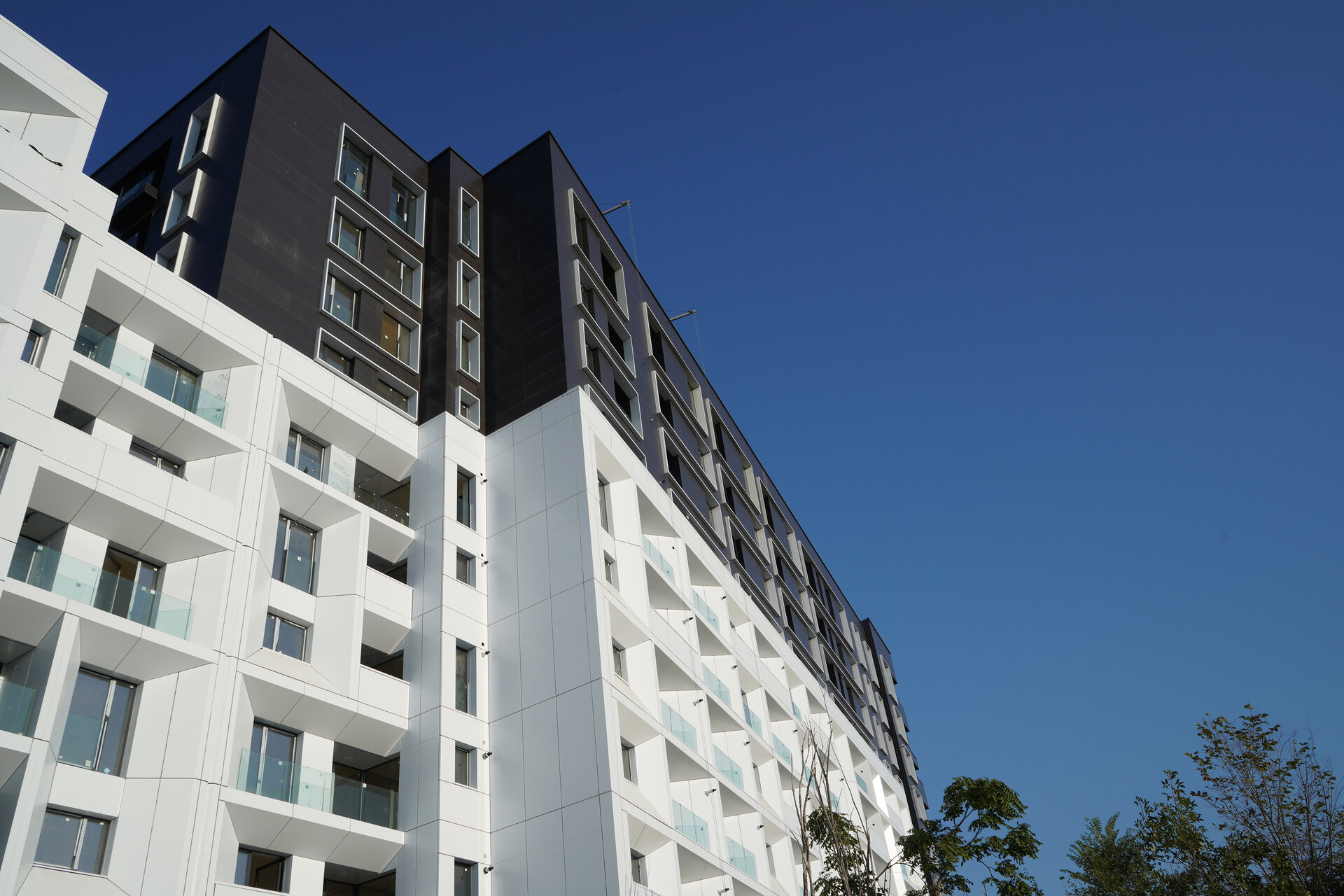 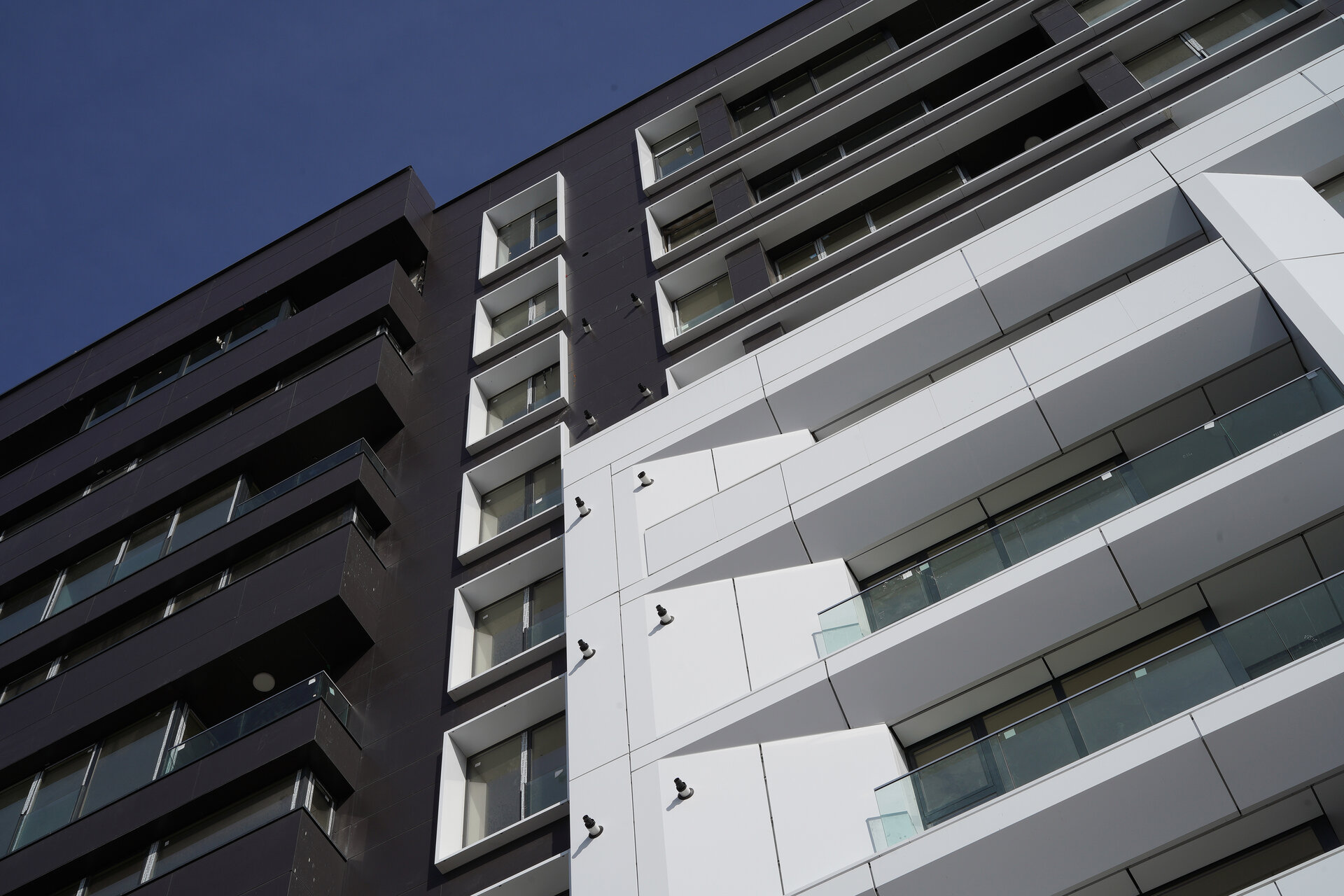 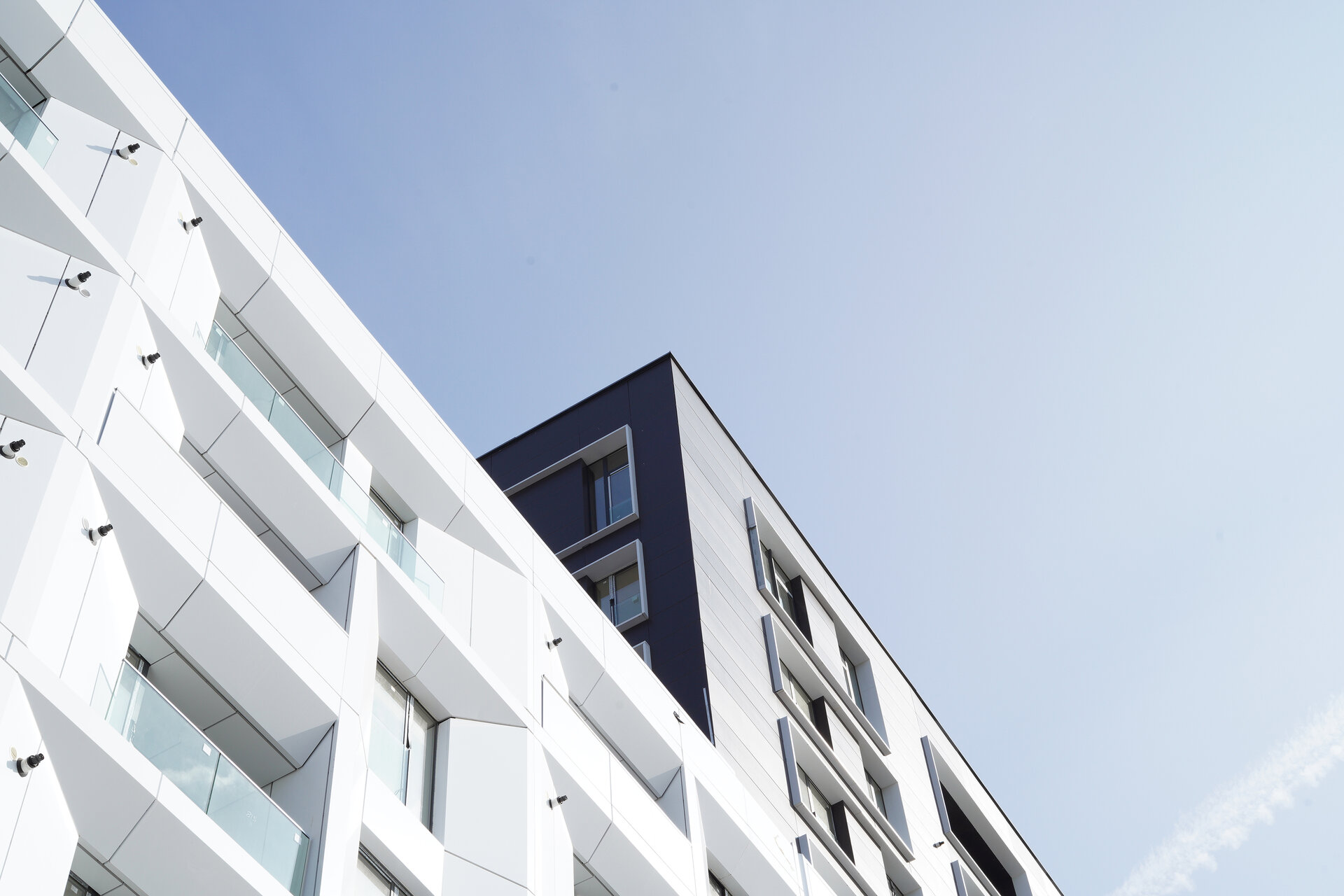 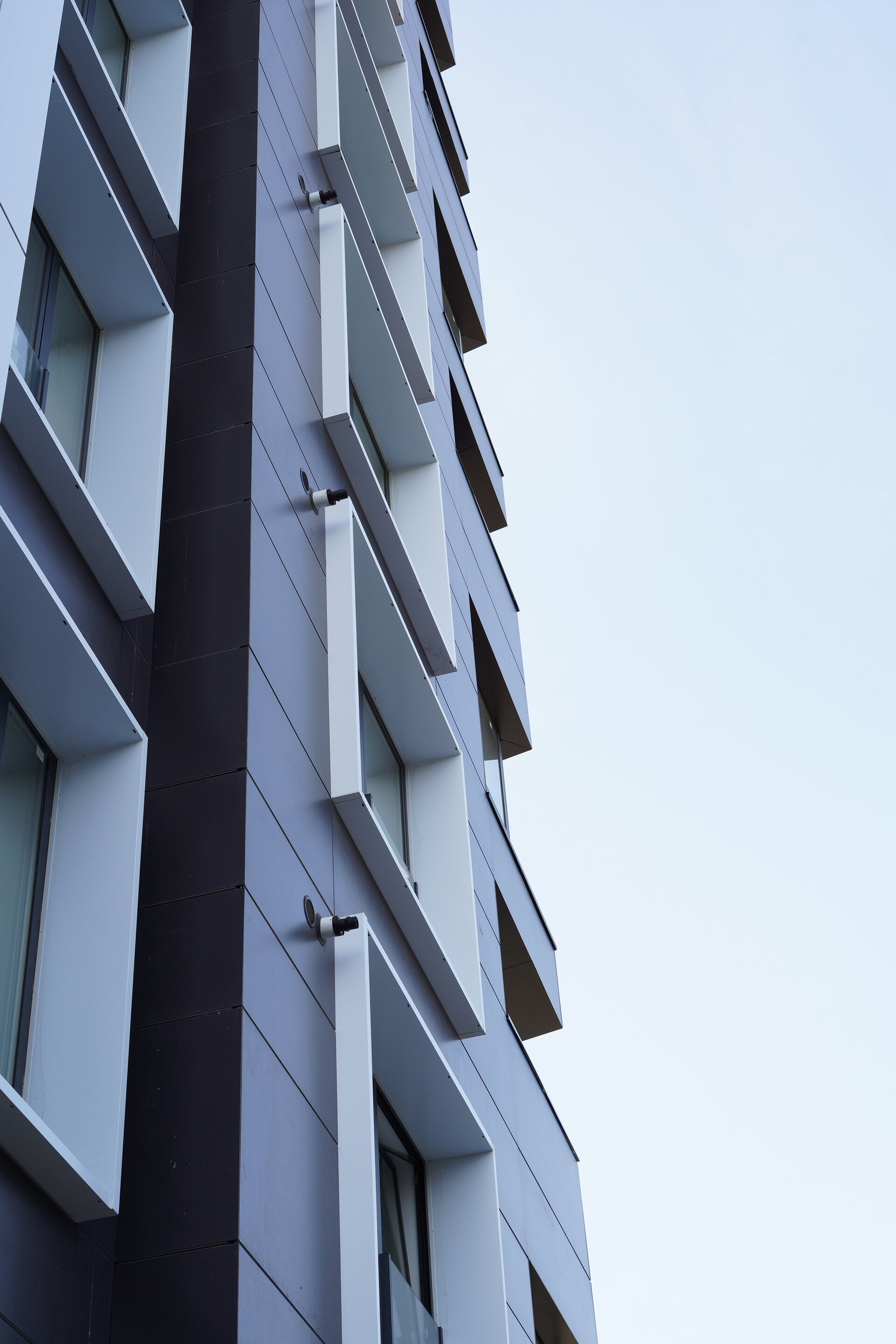 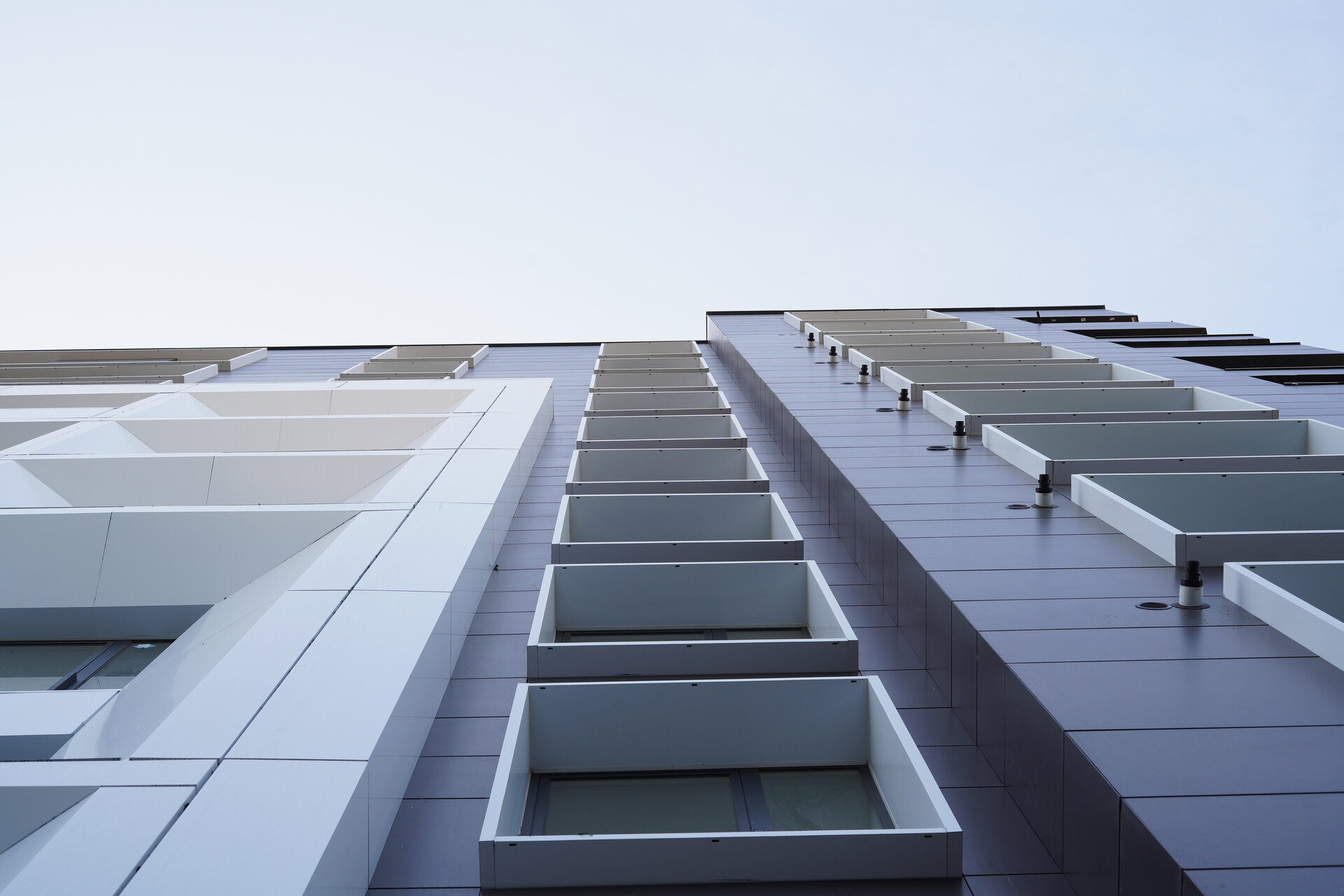 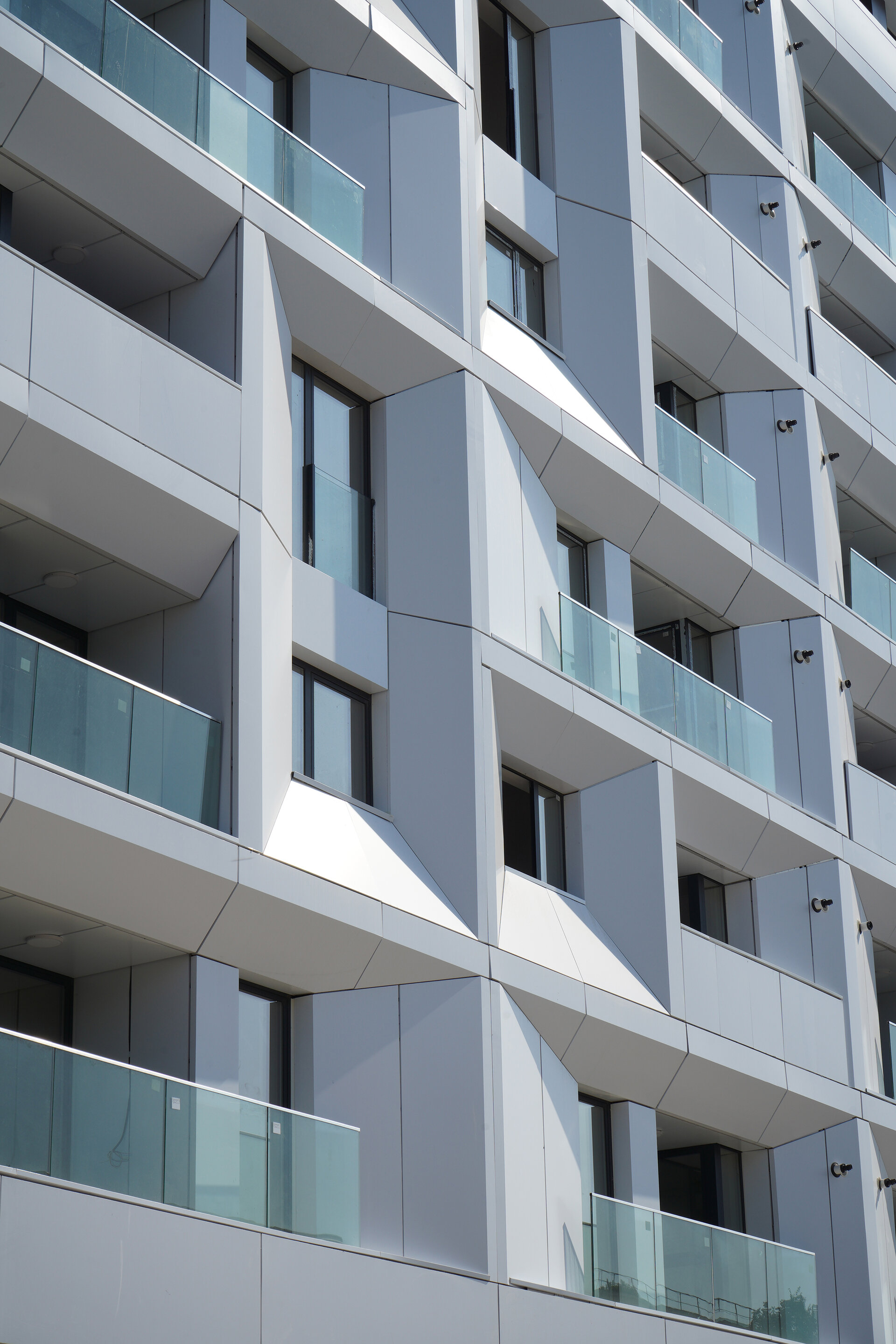 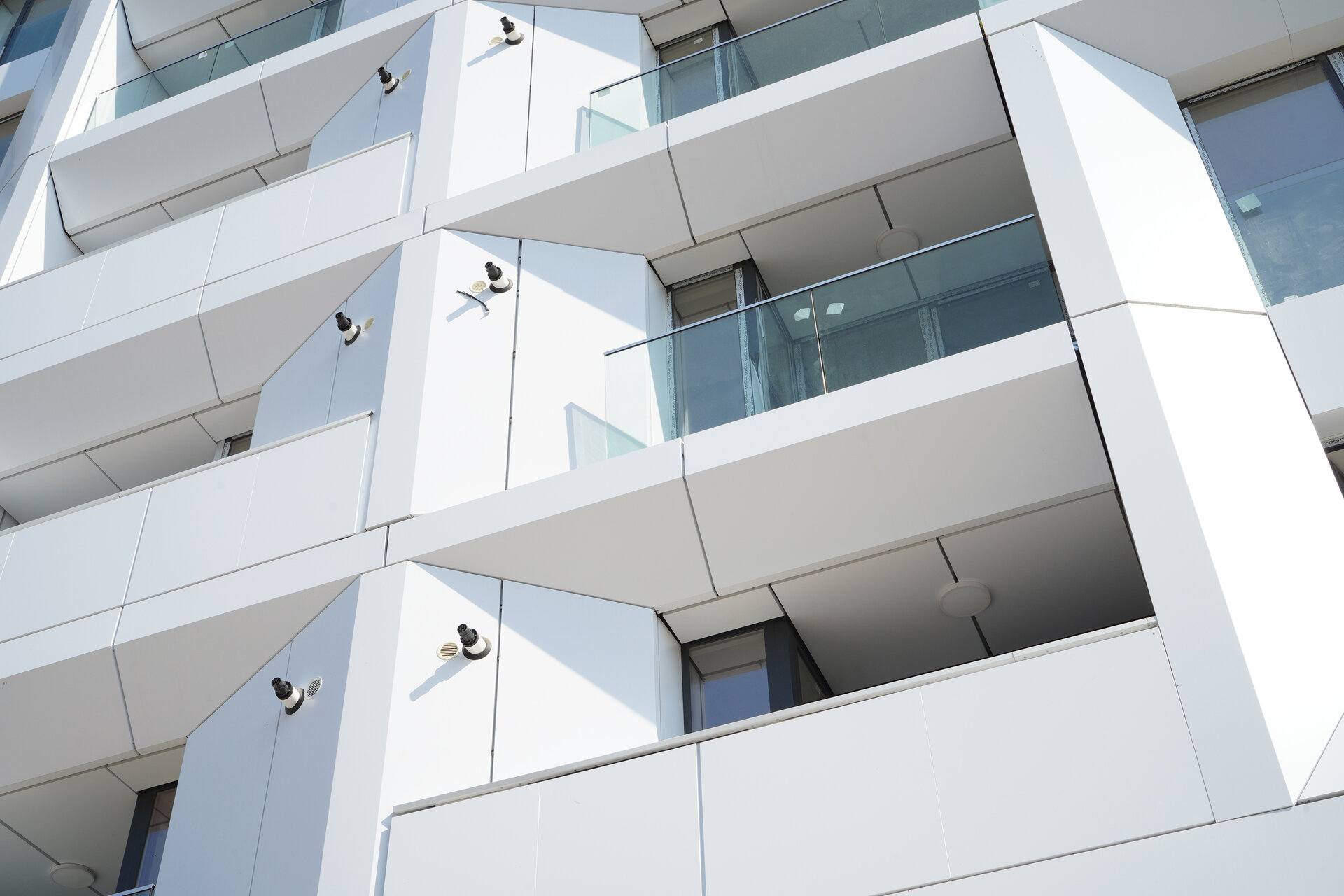 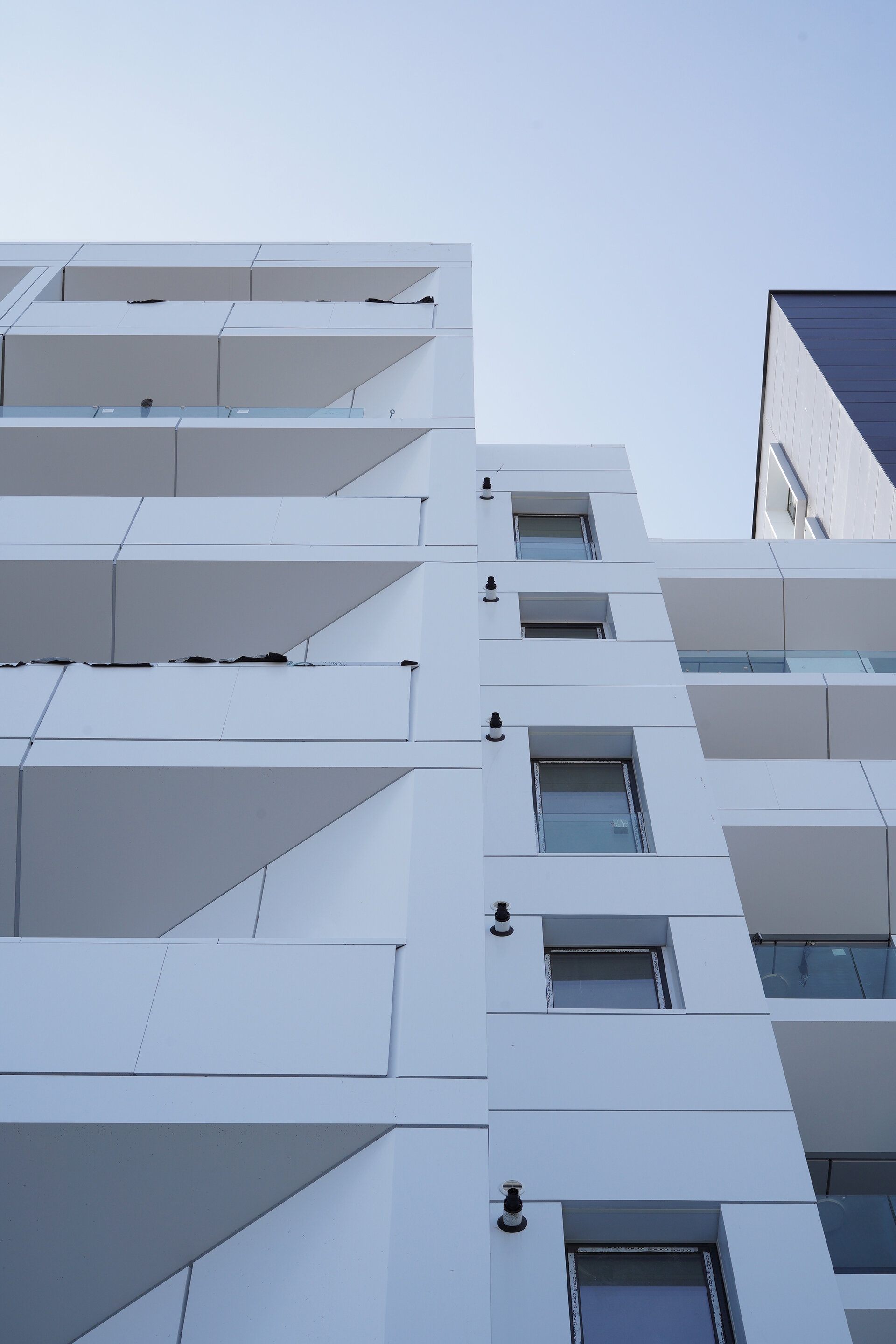