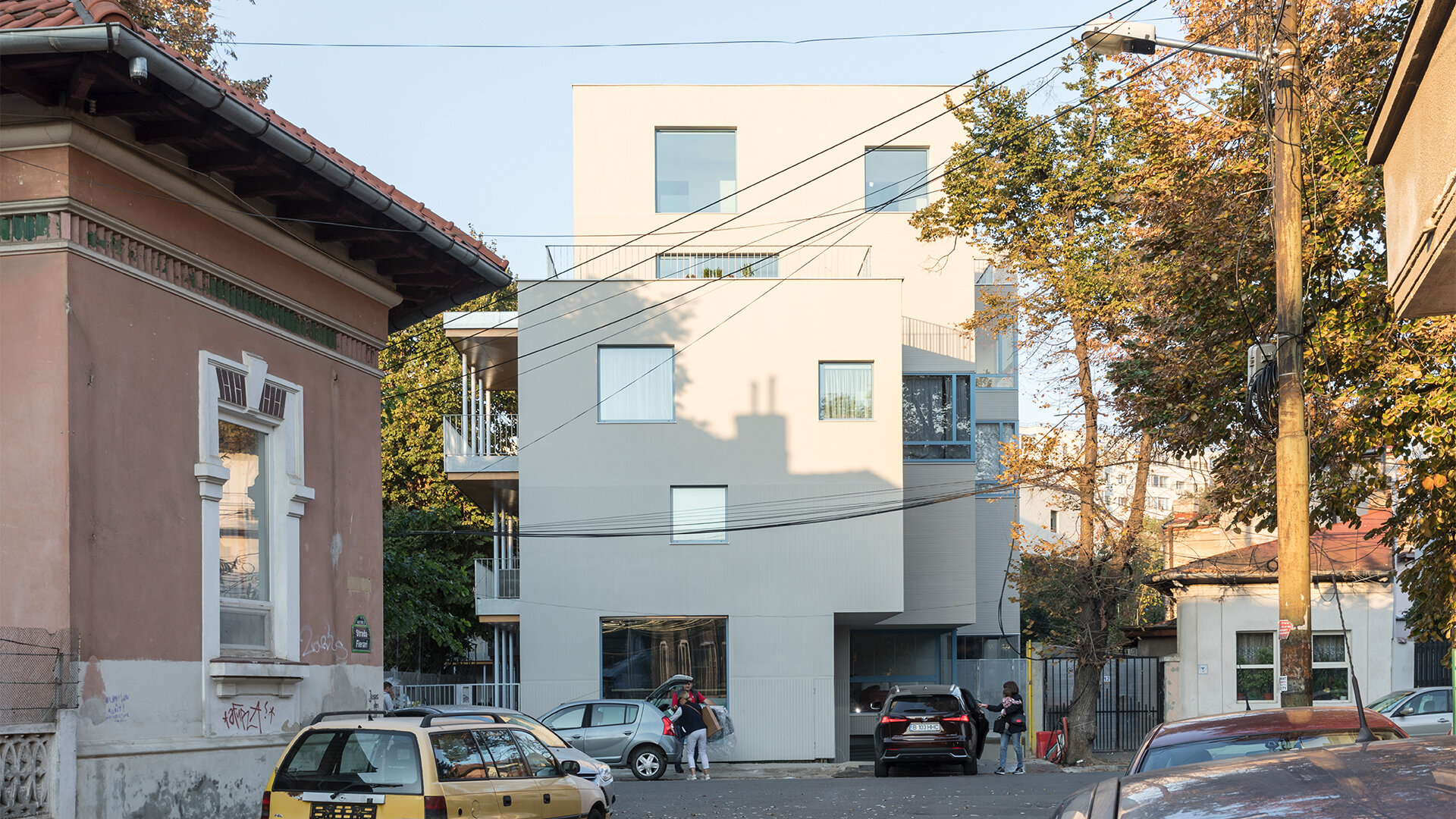 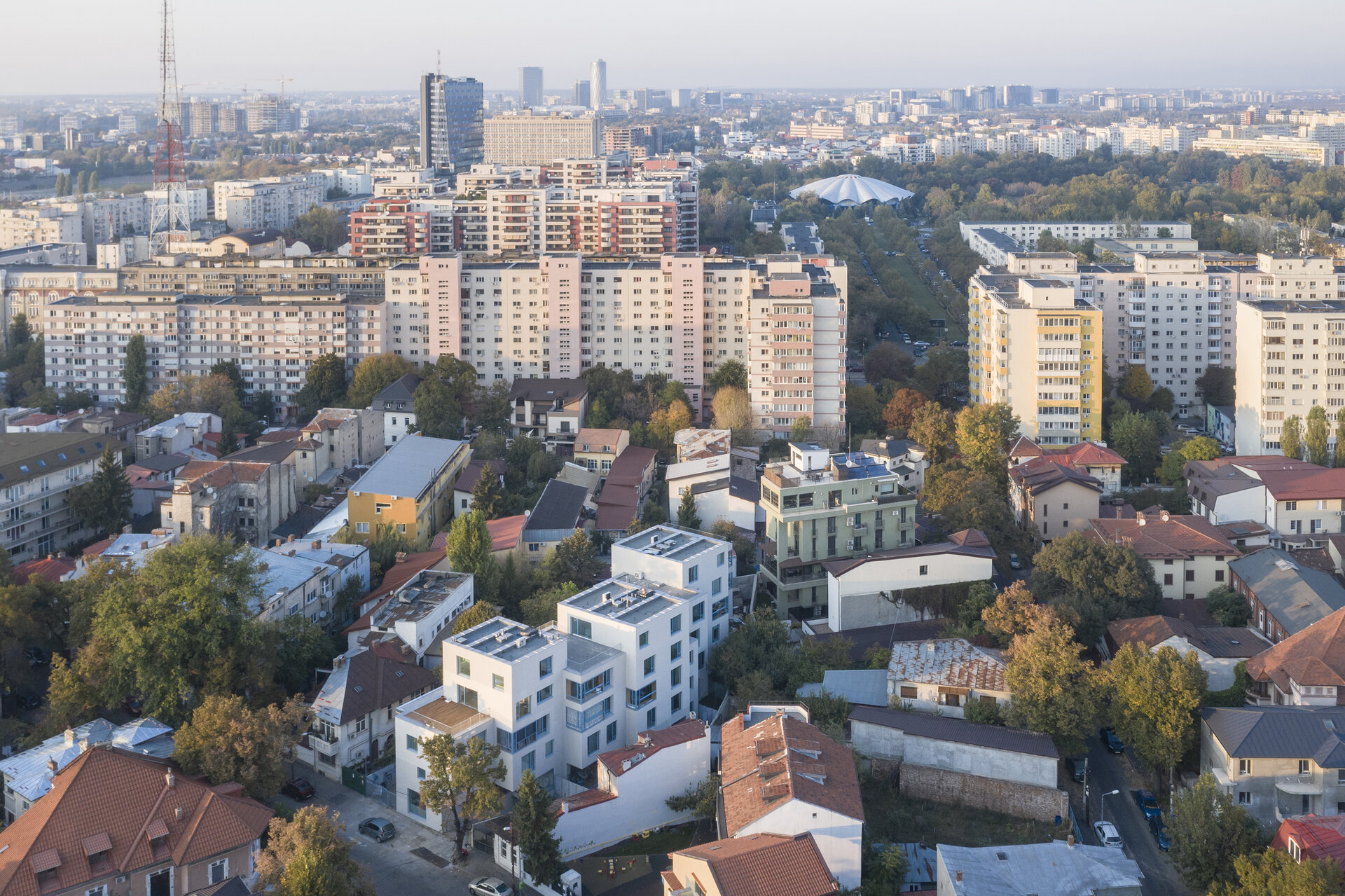 Bucharest's central areas face nowadays a fast and rather chaotic densification. While we believe that density can, and many times must be seen as a form of sustainability, we also admit that the relationship between habitation within an old urban fabric and the increase of its density is often a fragile one, as places might lose their character.

Our project is looking for an appropriate answer to this problem. It tries to mediate between different sizes and densities, in a central neighborhood with small streets, long, narrow plots and a puzzle of old and new buildings, of all types and scales, which is also not far from the socialist intervention of a large boulevard and its "curtain" of tall apartment blocks.

The project is built on Barbu Mumuleanu street at no 14, a long, narrow and twisted plot. The proposal consists in the successive placement along the site, from South to North, of 7 houses-like volumes, a community of 20 unique apartments. The building's imprecise outline opens less towards the street, and more towards the deep and diffused core which is often hidden between Bucharest’s old streets.

The elongated volume stretches from the street to the (deep) back of the site, and stays connected to the street through an access courtyard which runs along the site's western boundary. On the plot’s eastern side, the long and irregular strip of land is split in a sequence of private gardens.

Between these two narrow gardens are therefore placed all the dwellings and their rooms, opening their doors and windows to both, receiving inside both the morning and the afternoon sun, each of them searching for its own proper space, orientation and proximity.

The access points' careful customization and the units' double orientation are borrowed from the characteristics of the wagon-type dwelling, a typical housing pattern in Bucharest's old central neighborhoods. The "wagon house" typology has been an important reference for the project. Thus, on the ground floor duplex apartments are entered directly from the common garden, like a series of maisonettes. On the second floor, an external corridor runs along the whole building, replicating the ground floor common garden’s appearance and aiming to become a genuine "alley" or elevated garden, through which all apartments from the 2nd and 3rd floor are accessed. Not only the communal western garden, but also the small private gardens on the east are replicated above, by the means of some winter gardens - loggias with movable glass enclosures - which allow for all apartments, down on the ground or above, to enjoy the same spatial sequence.

The project thus tries to work with a typological criteria and aims to respect and complete the neighborhood’s character, by attaching and overlapping dwellings with distinct, private entrances, with porches, gardens, terraces, or just open niches to the front west side garden, or to the intimate east side (back) garden.

Along with the searches for a typological specificity, the connection to the neighborhood's scale consisted also in fragmenting the building's mass in volumes with different heights. This was done as an attempt to connect the new building to the old ones and protect the urban fabric, while also allowing the light to pass through towards the neighbor.

At the same time, the project has searched to reclaim the plaster as a simple, yet beautiful façade material and technique. A very common and rich technique in Bucharest’s older architecture, it has recently almost disappeared, in a period when the whole city is being arbitrarily clad in colourful polystyrene. The plastering was applied and finished manually - all small errors were left visible, precisely because they enhance the beauty of the material. We believe that such "syncopes" complete the whole design’s expressiveness and may recover some of the "hand craft" techniques' lost qualities. 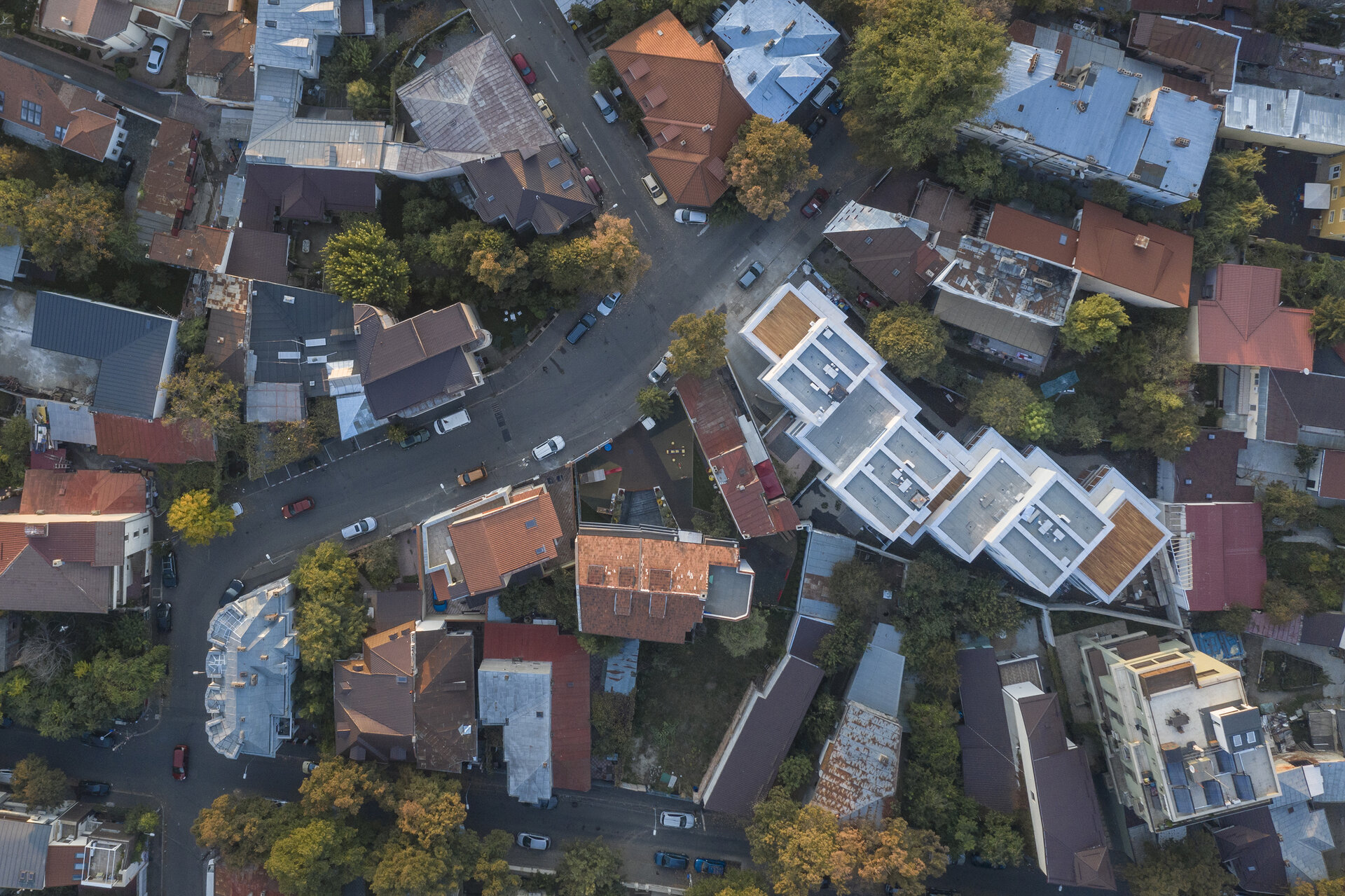 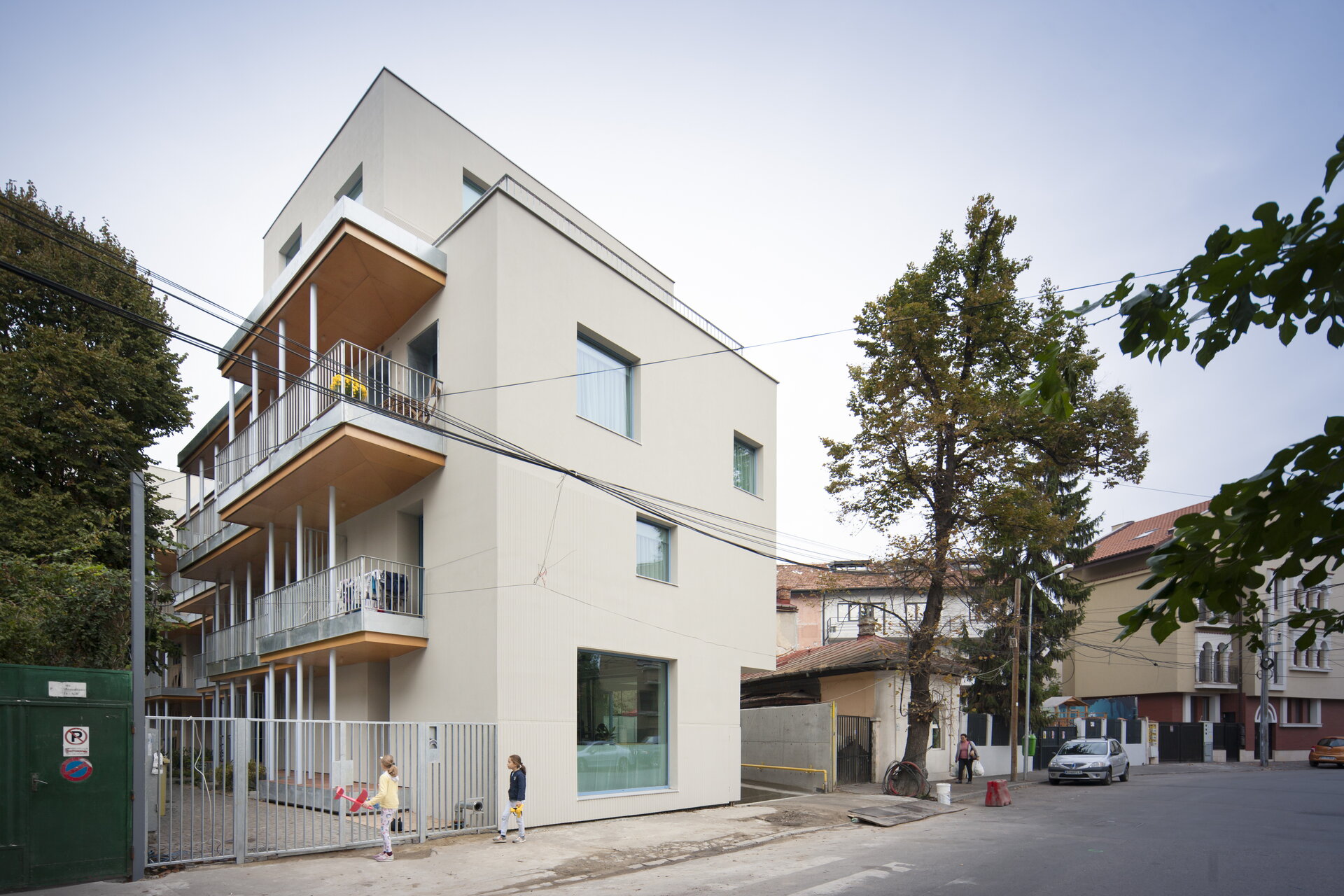 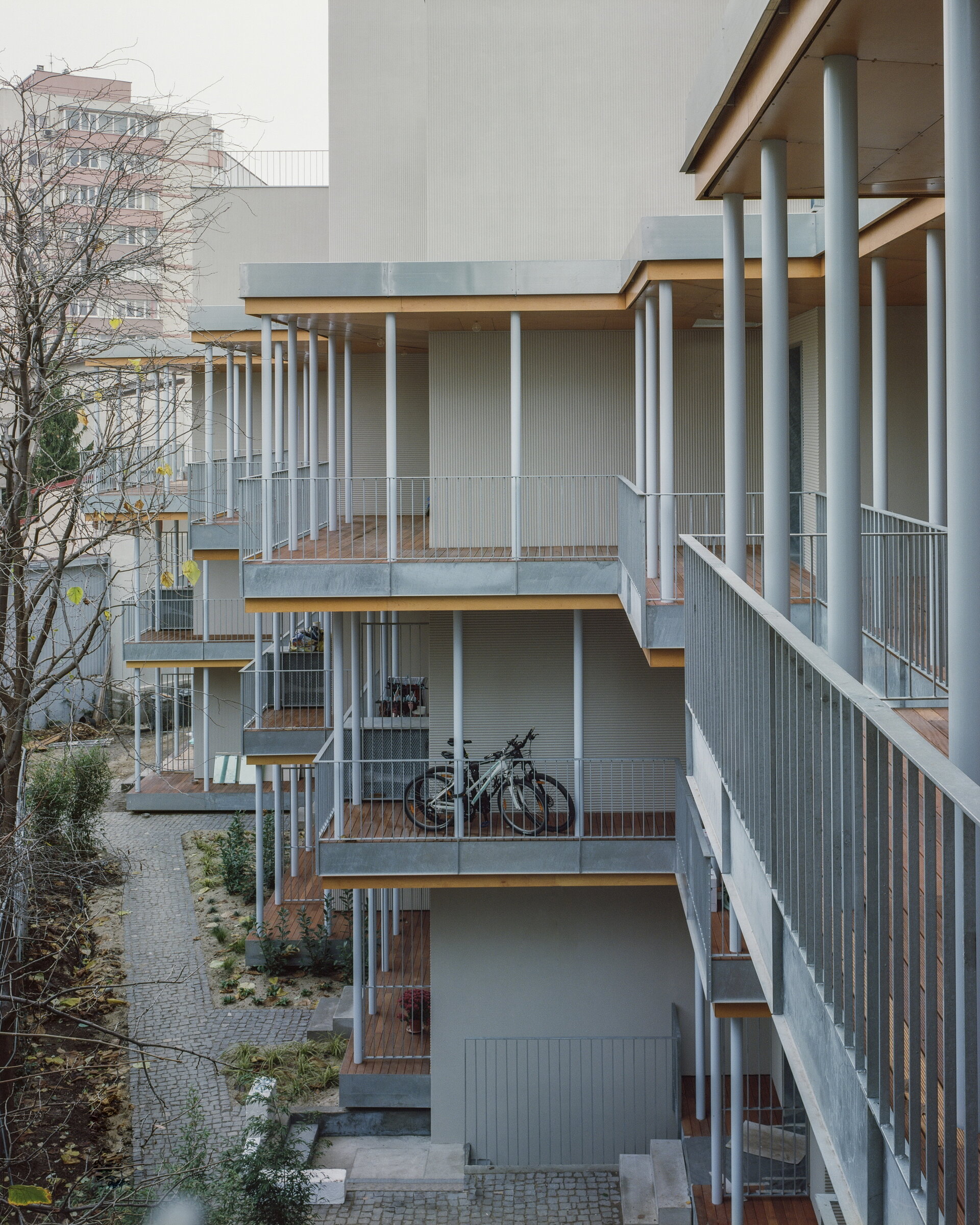 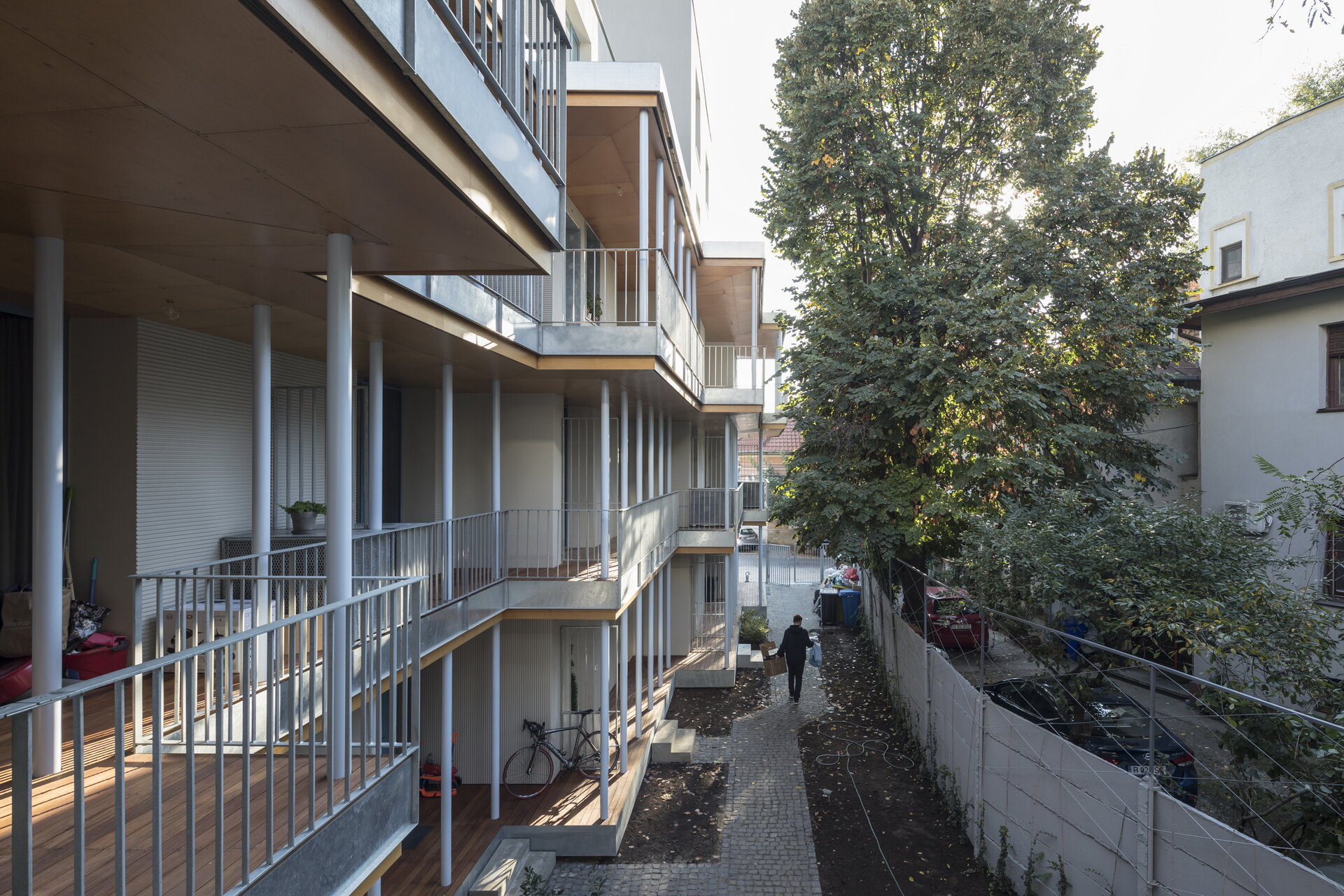 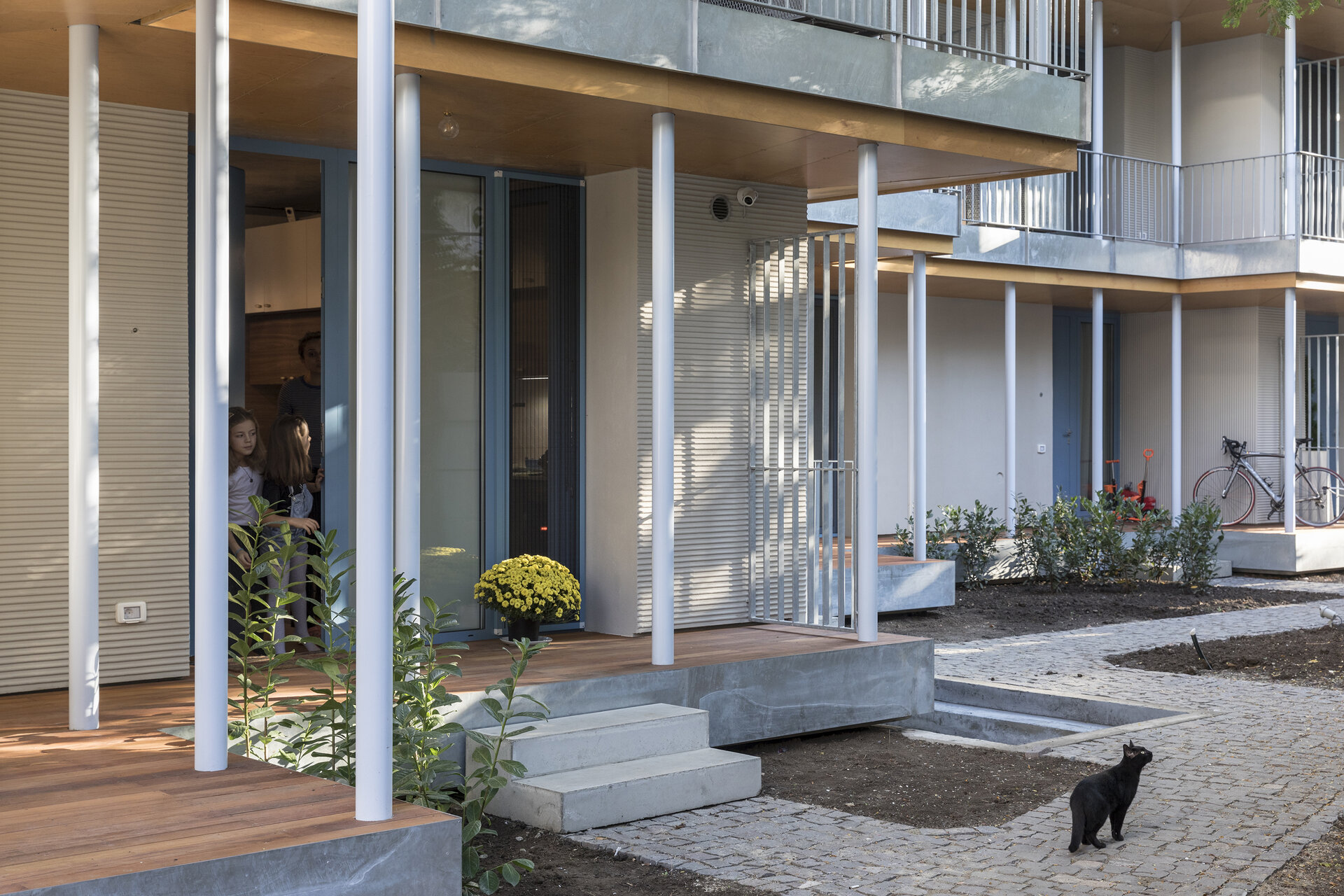 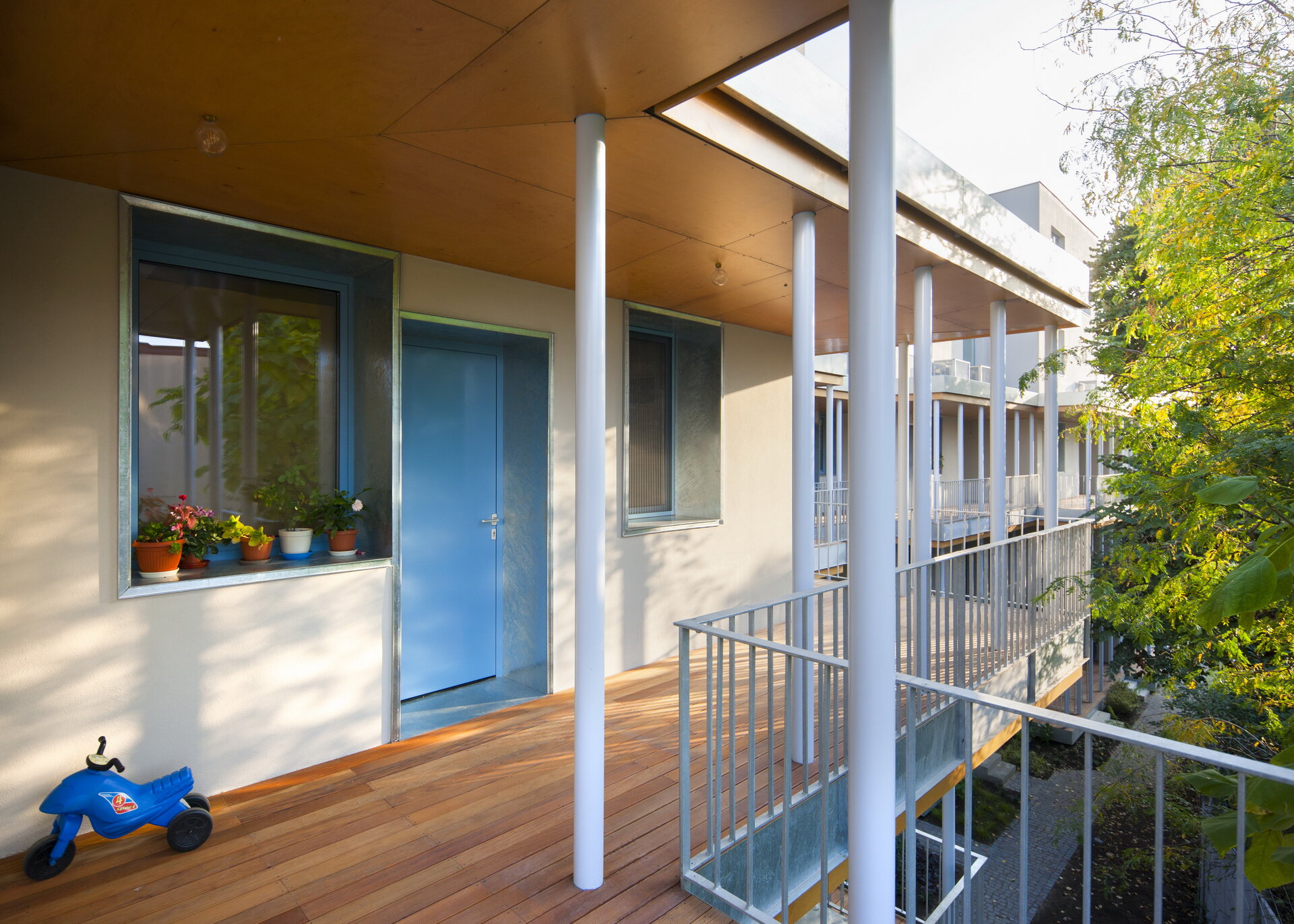 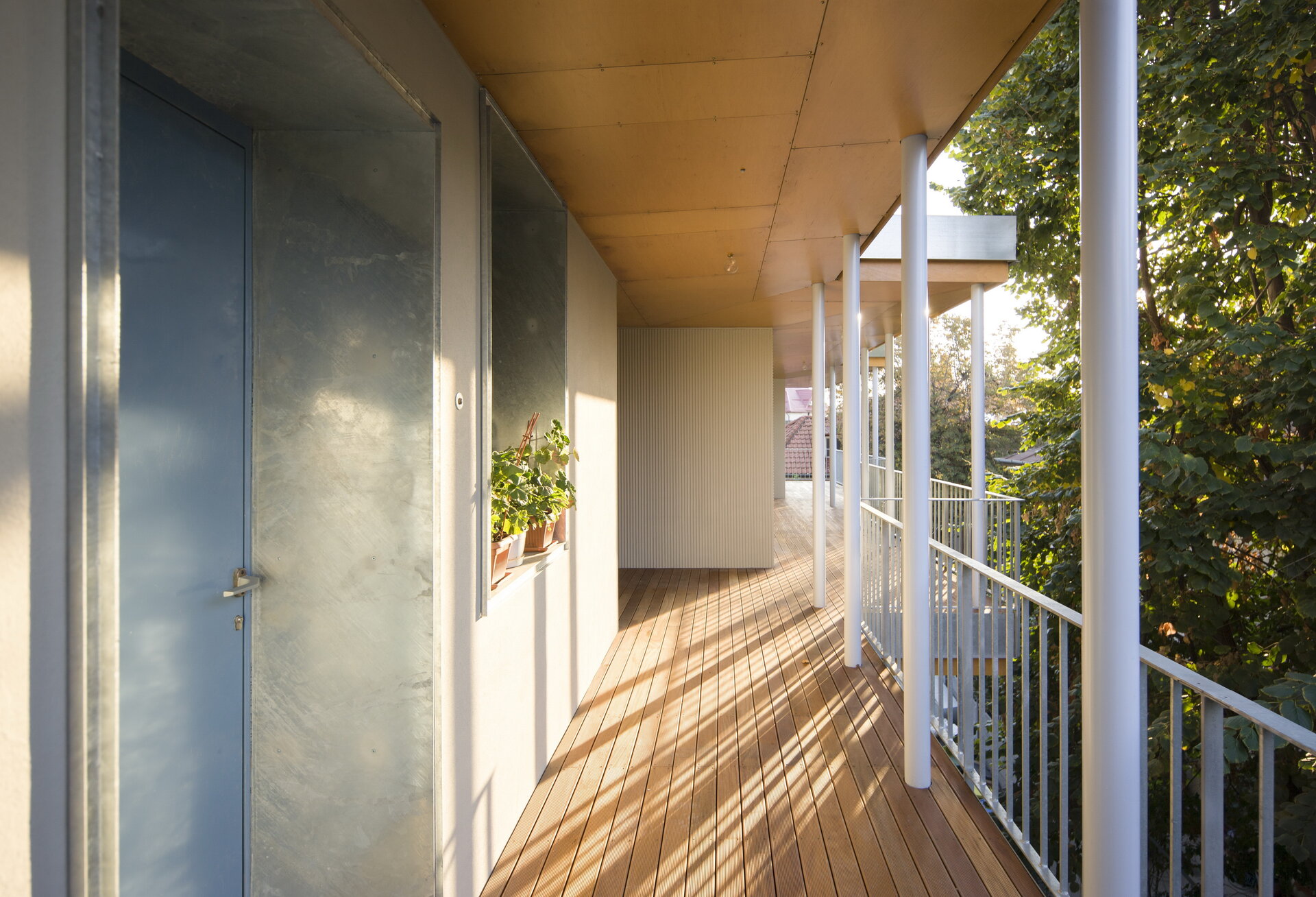 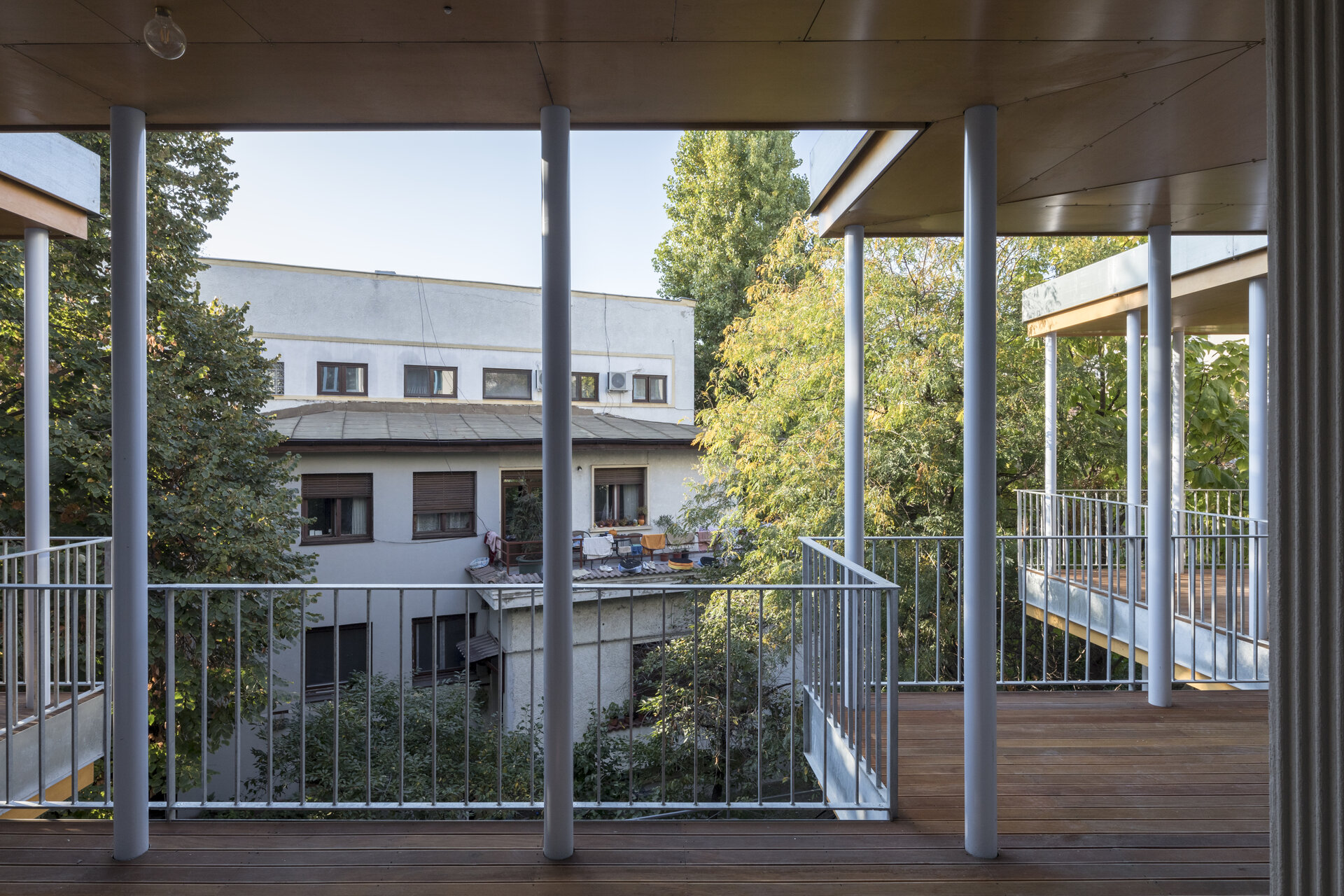 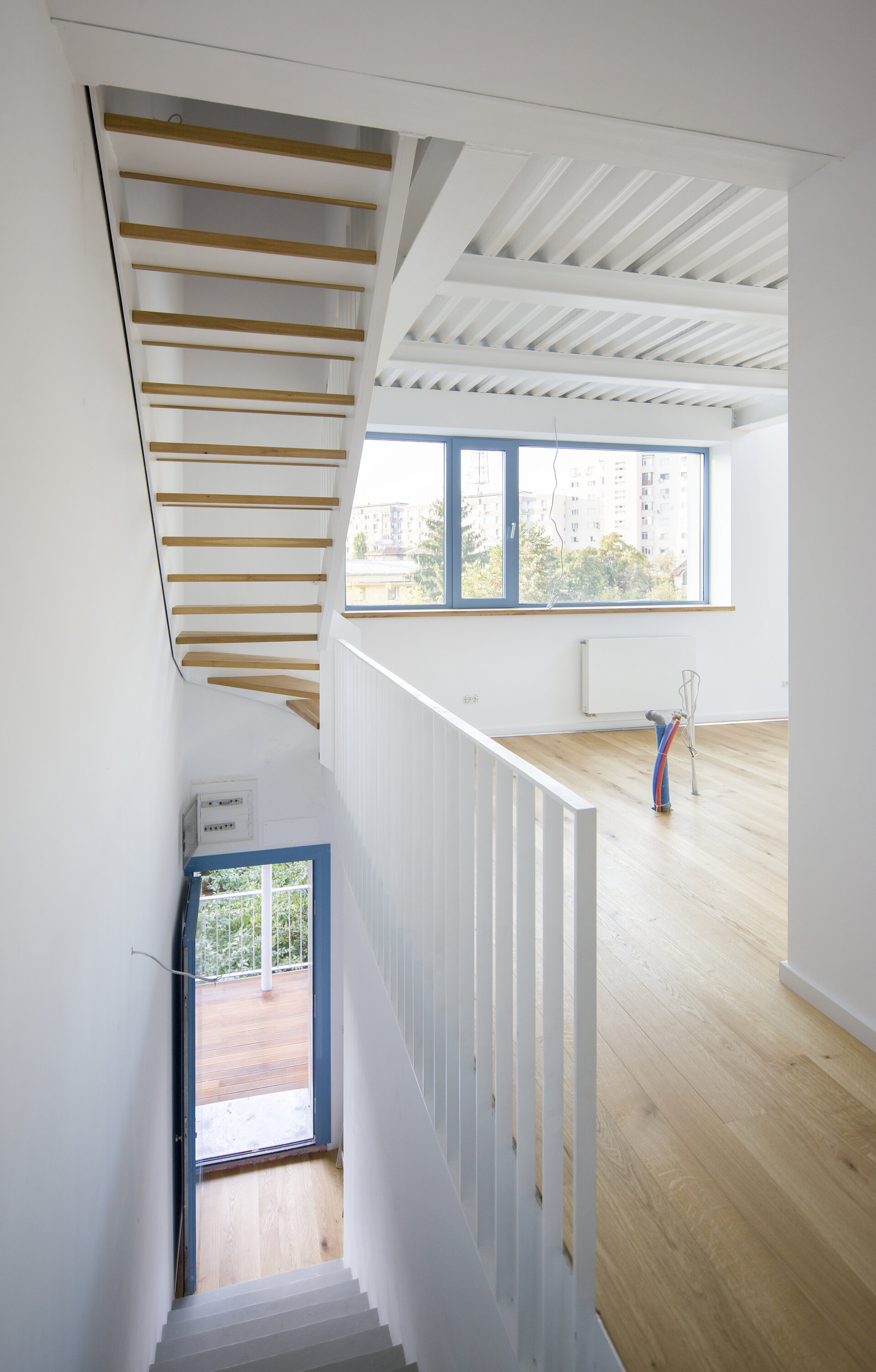 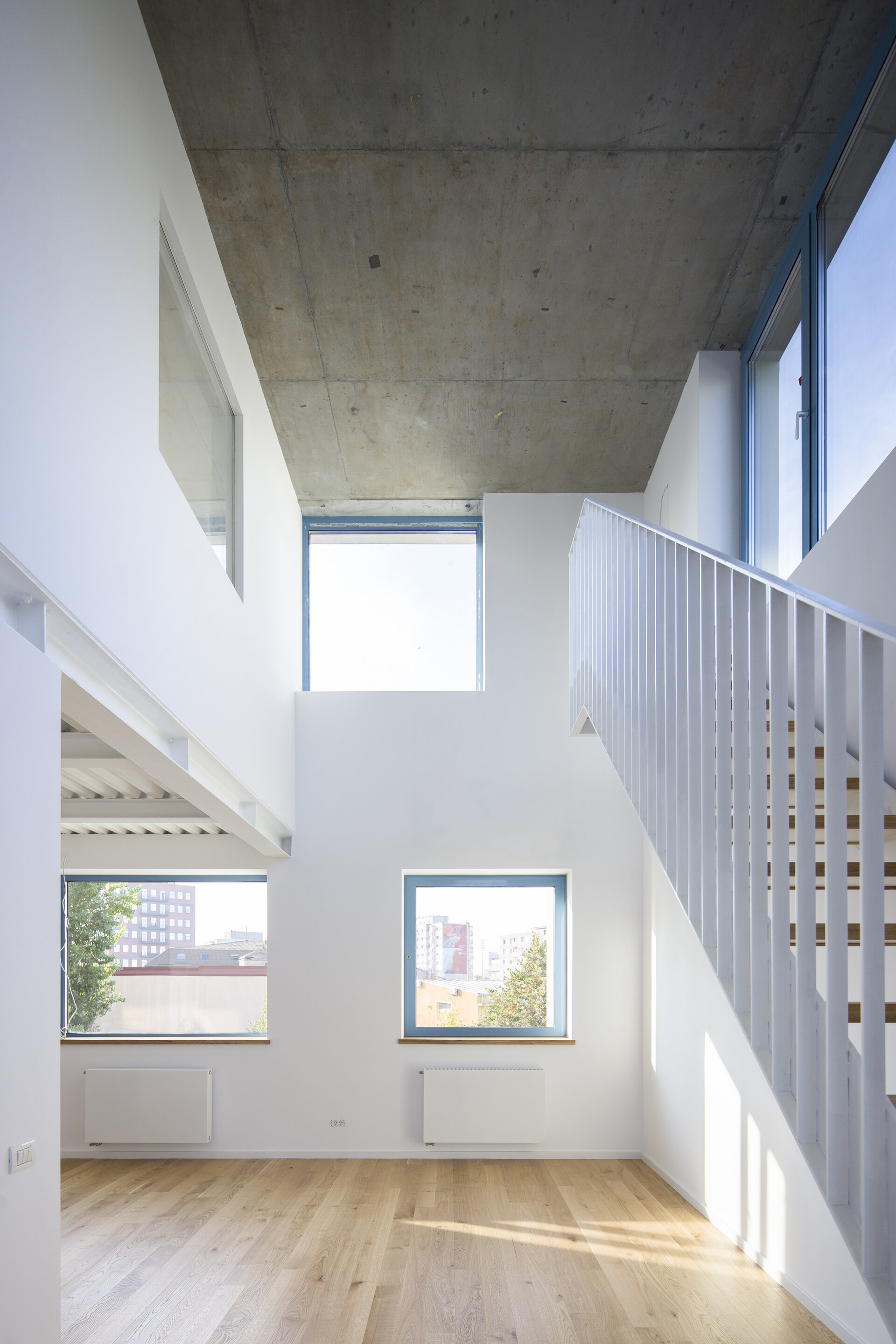 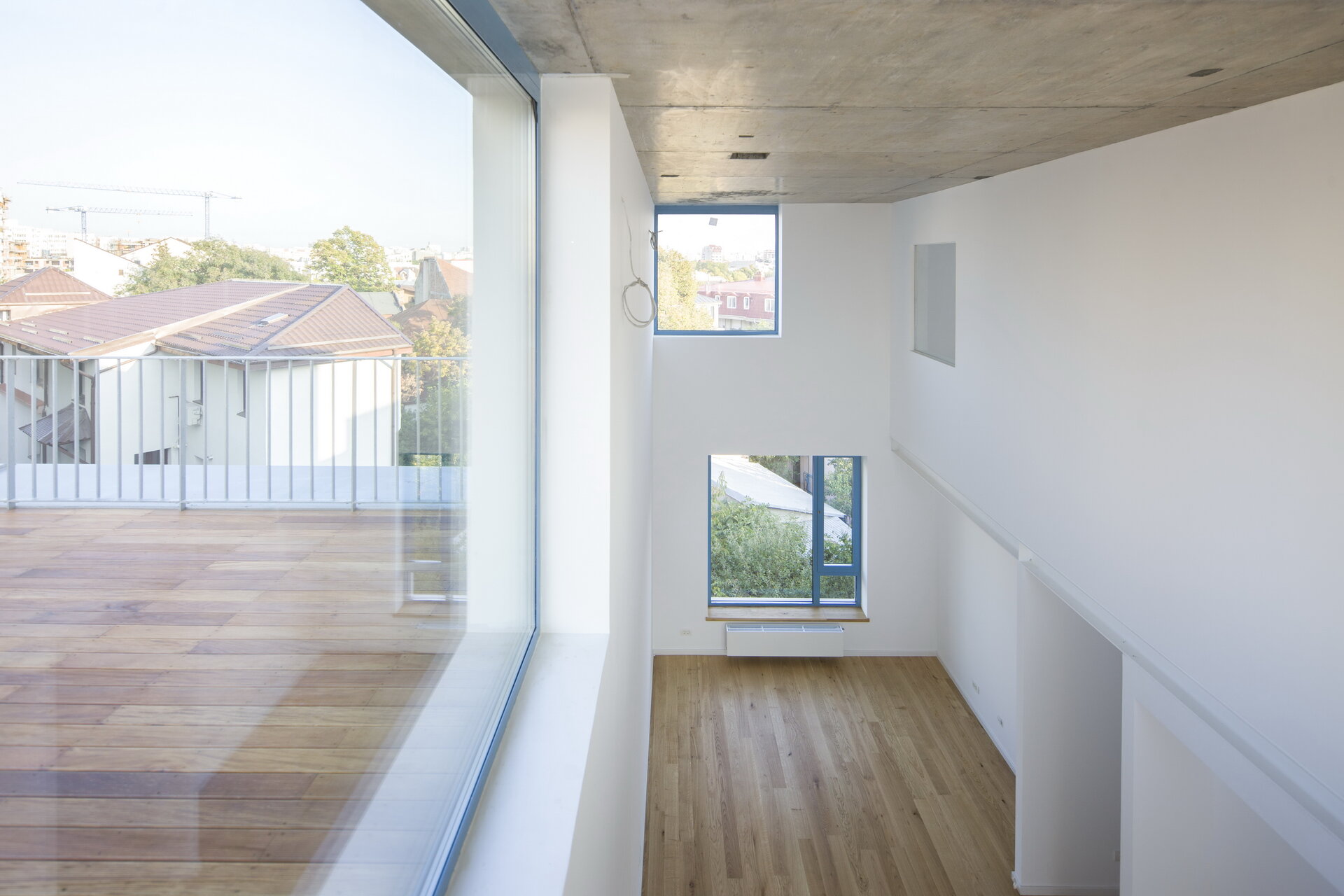 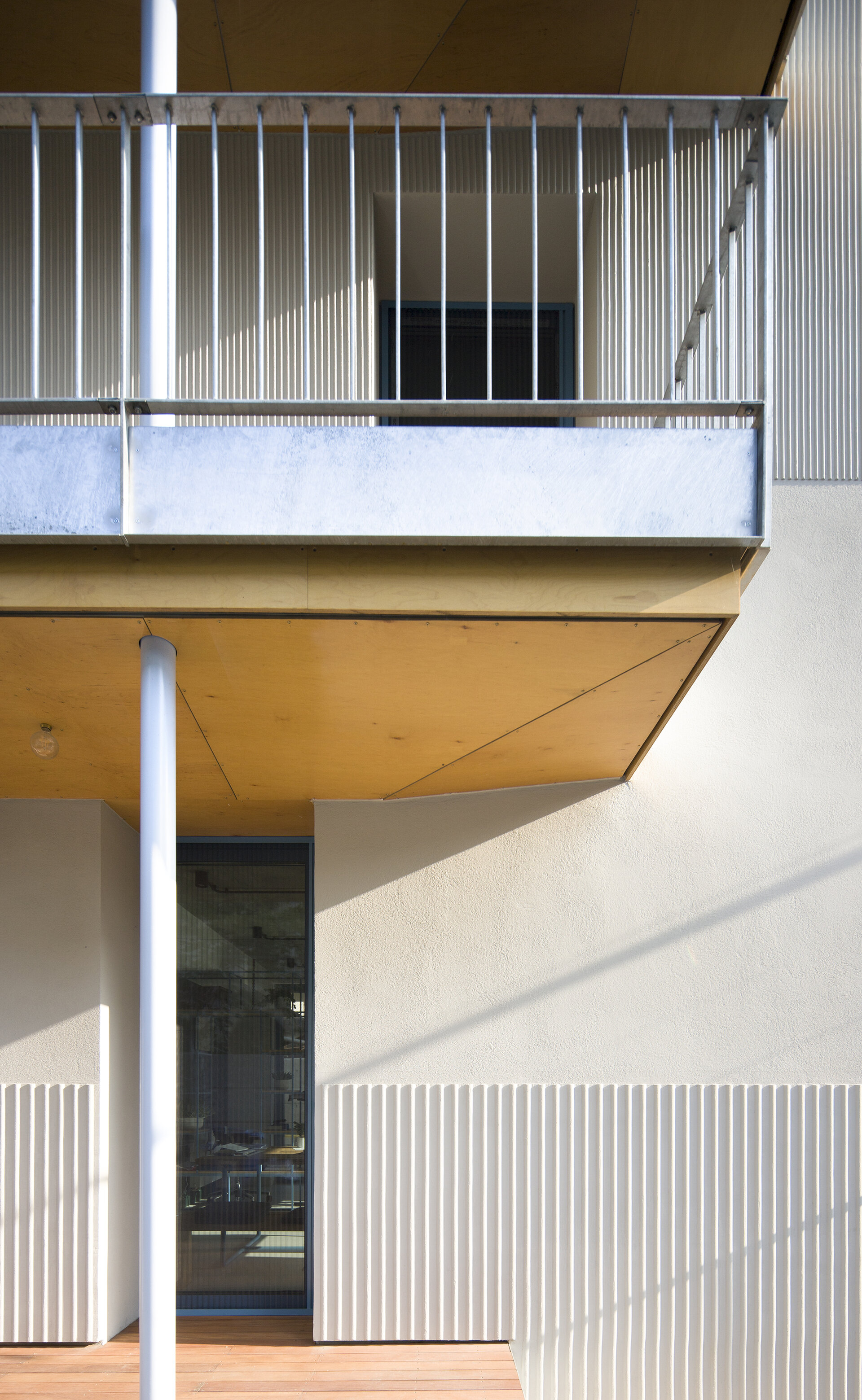 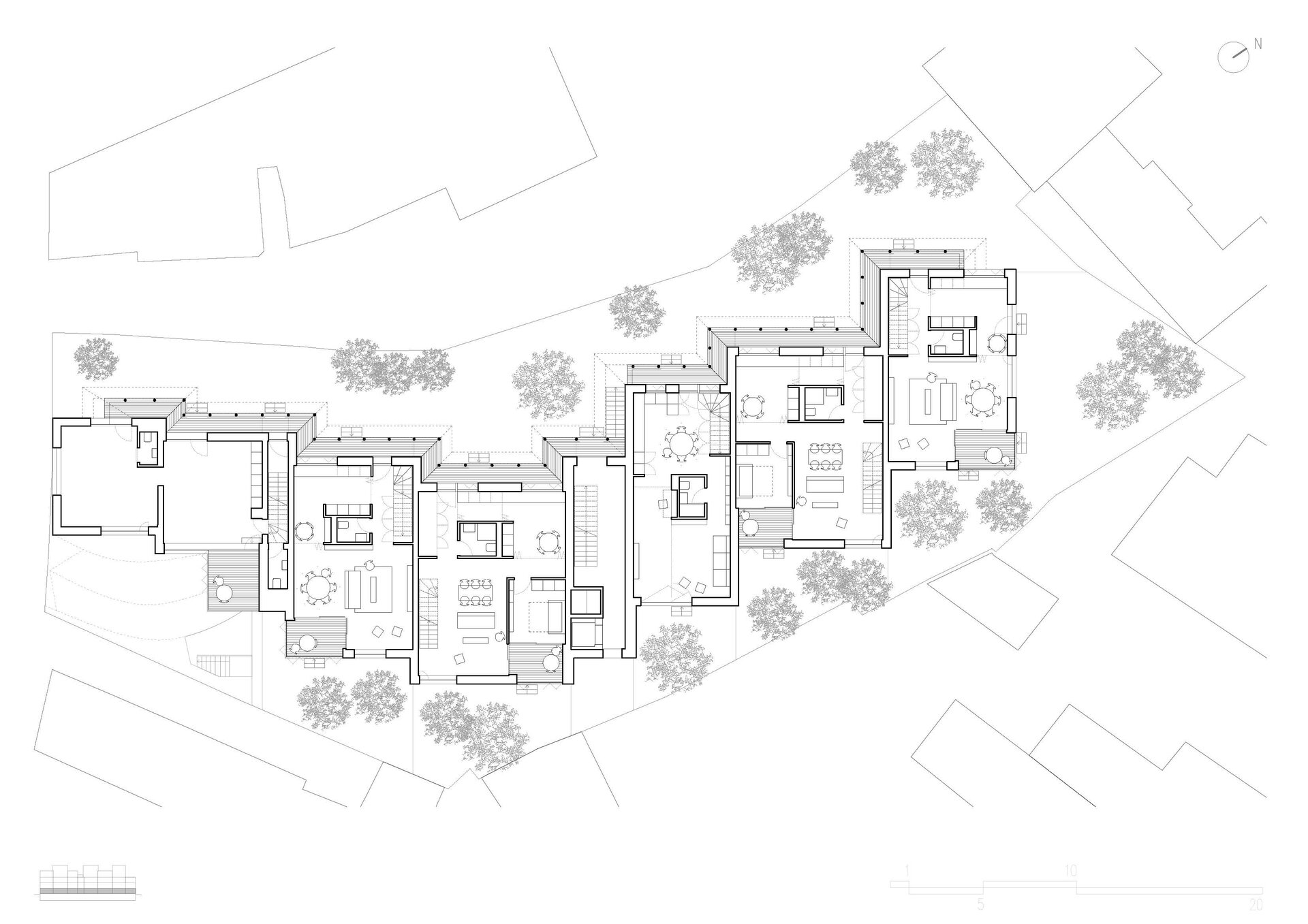 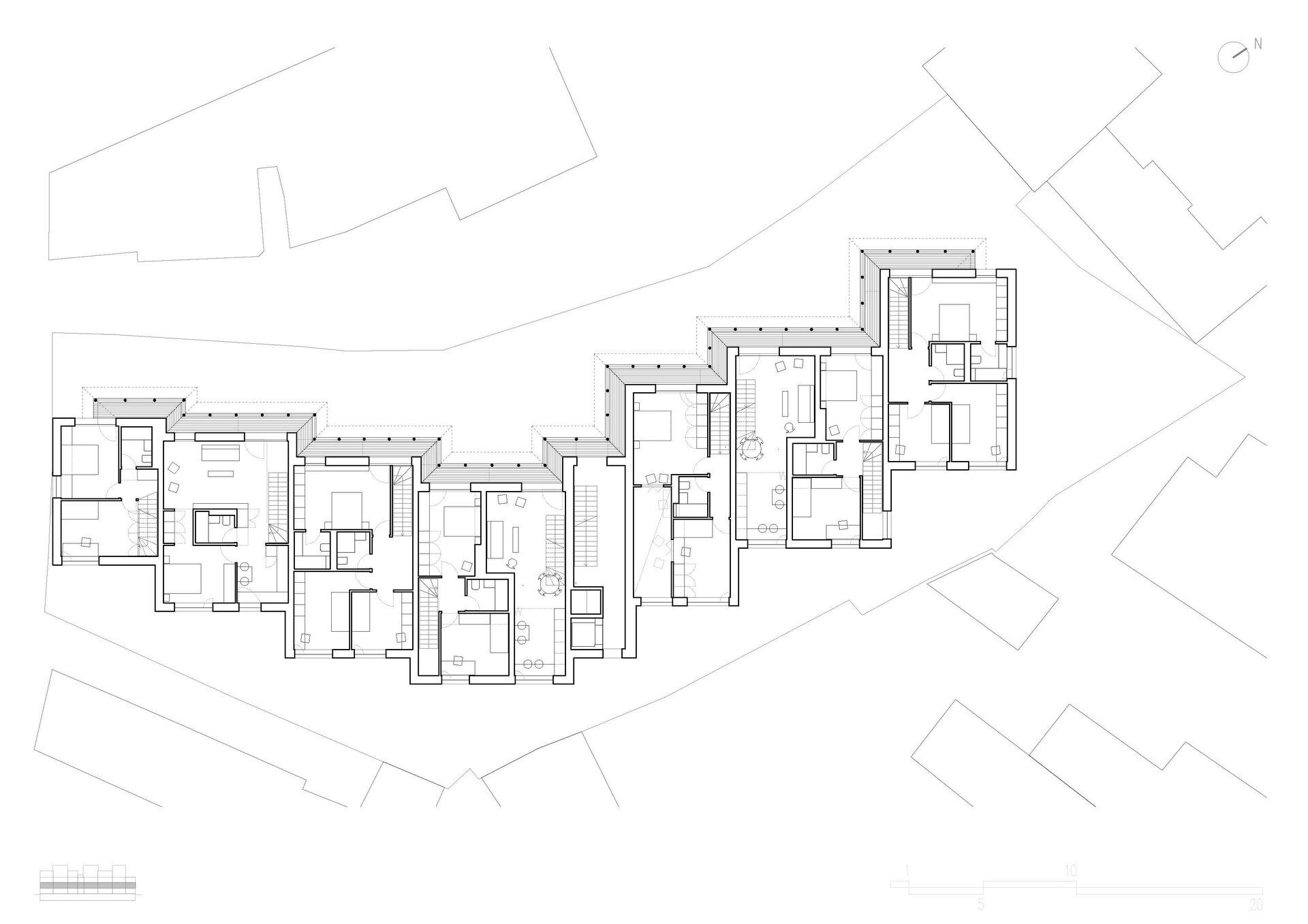 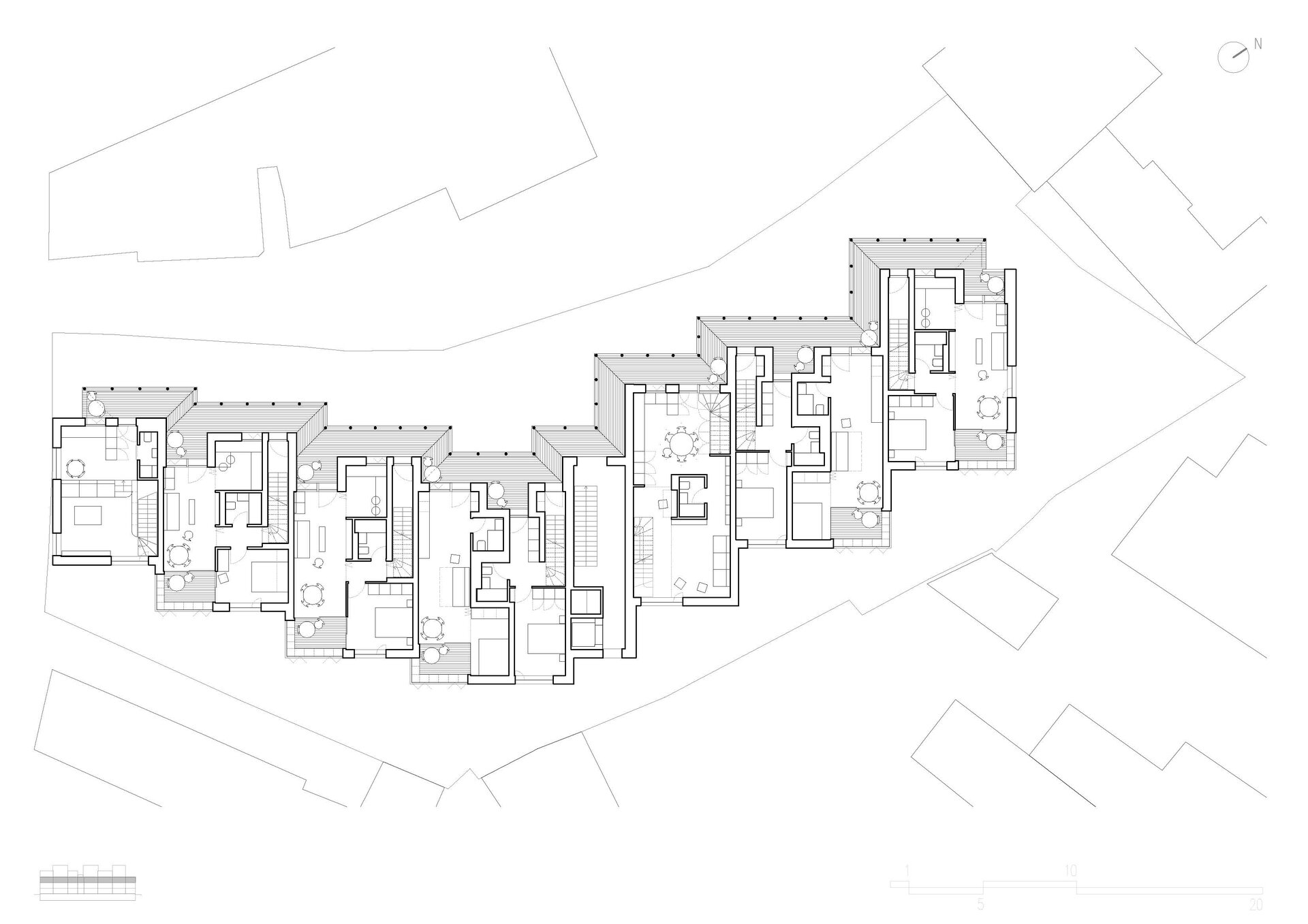 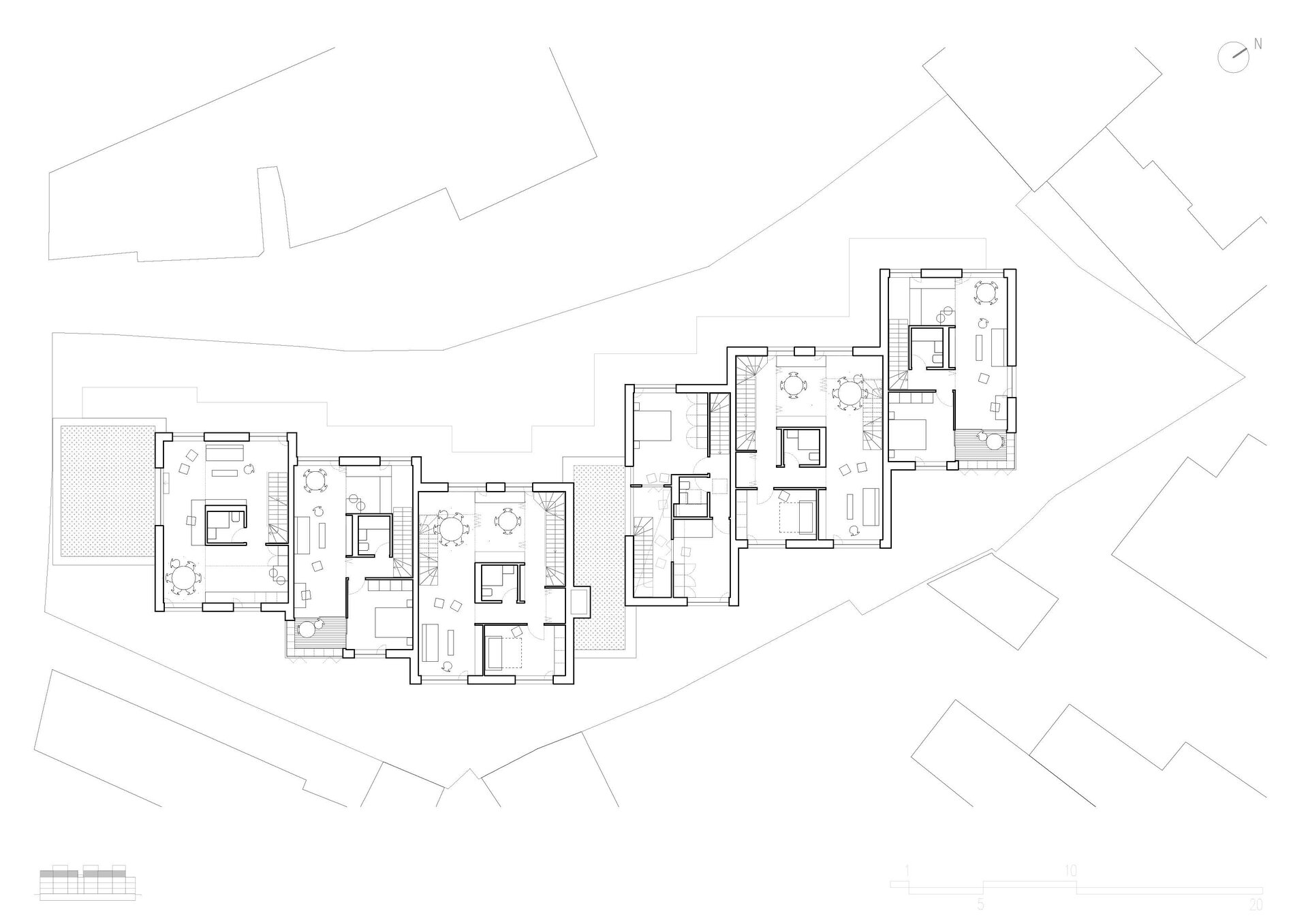 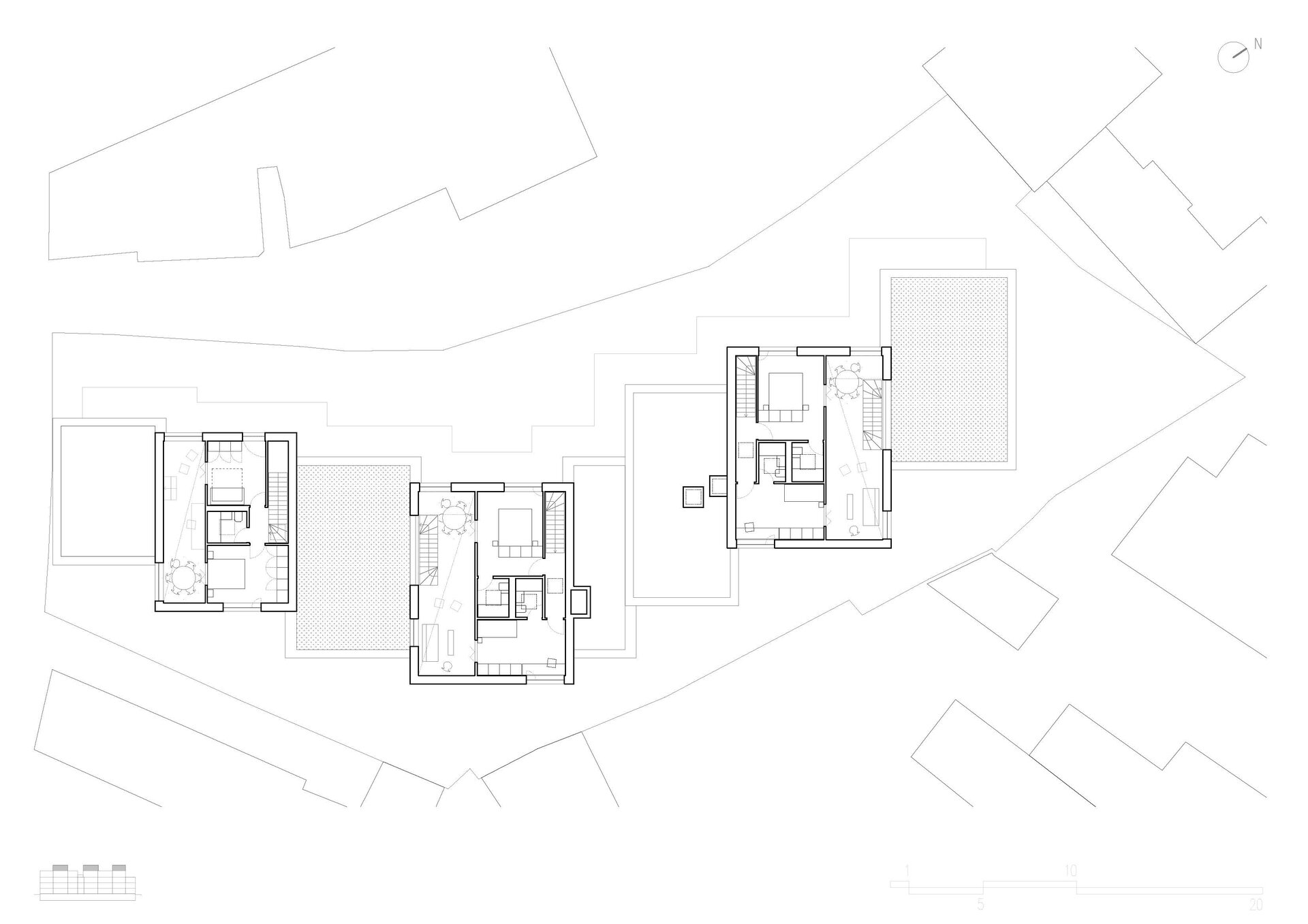 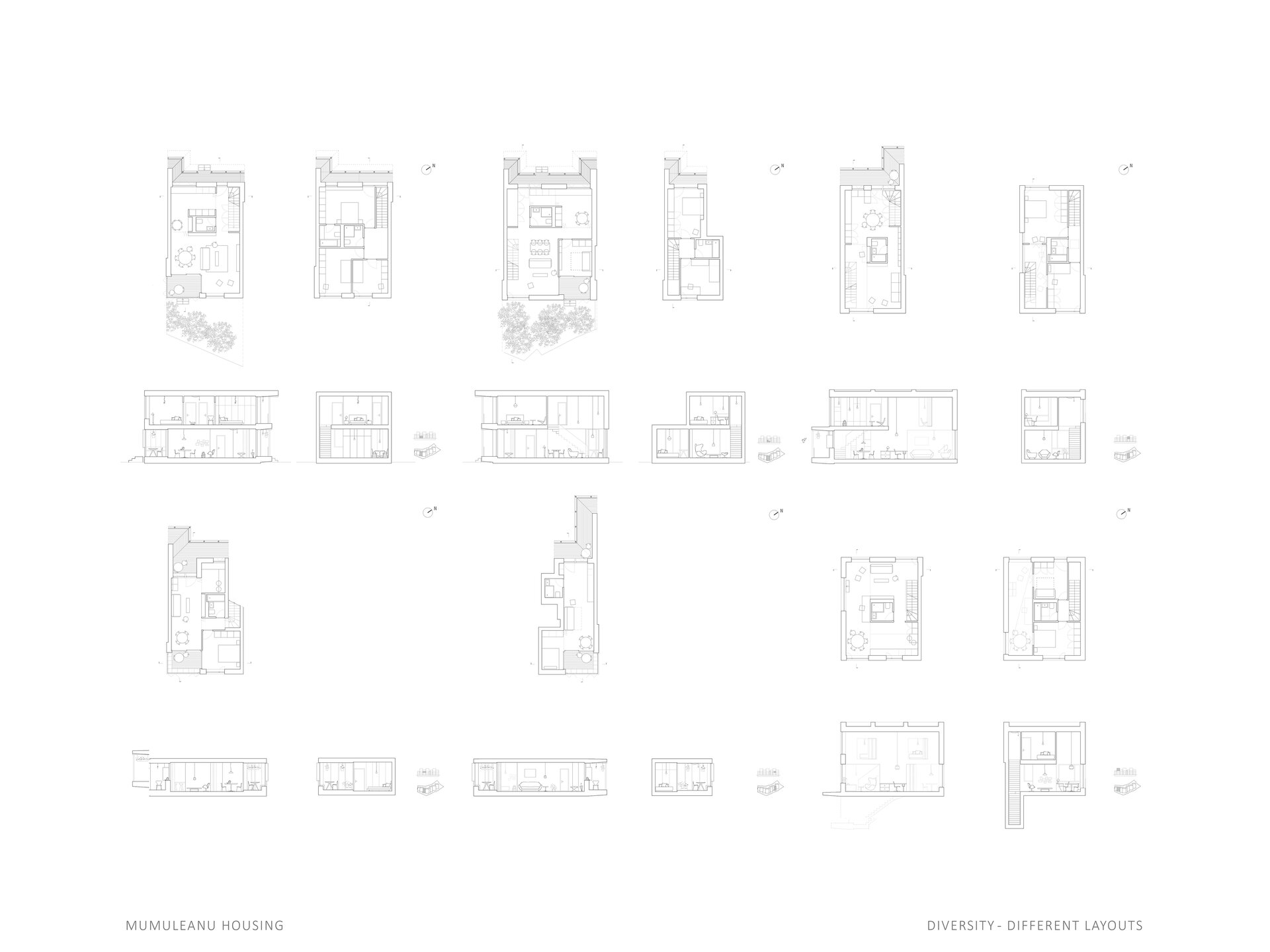 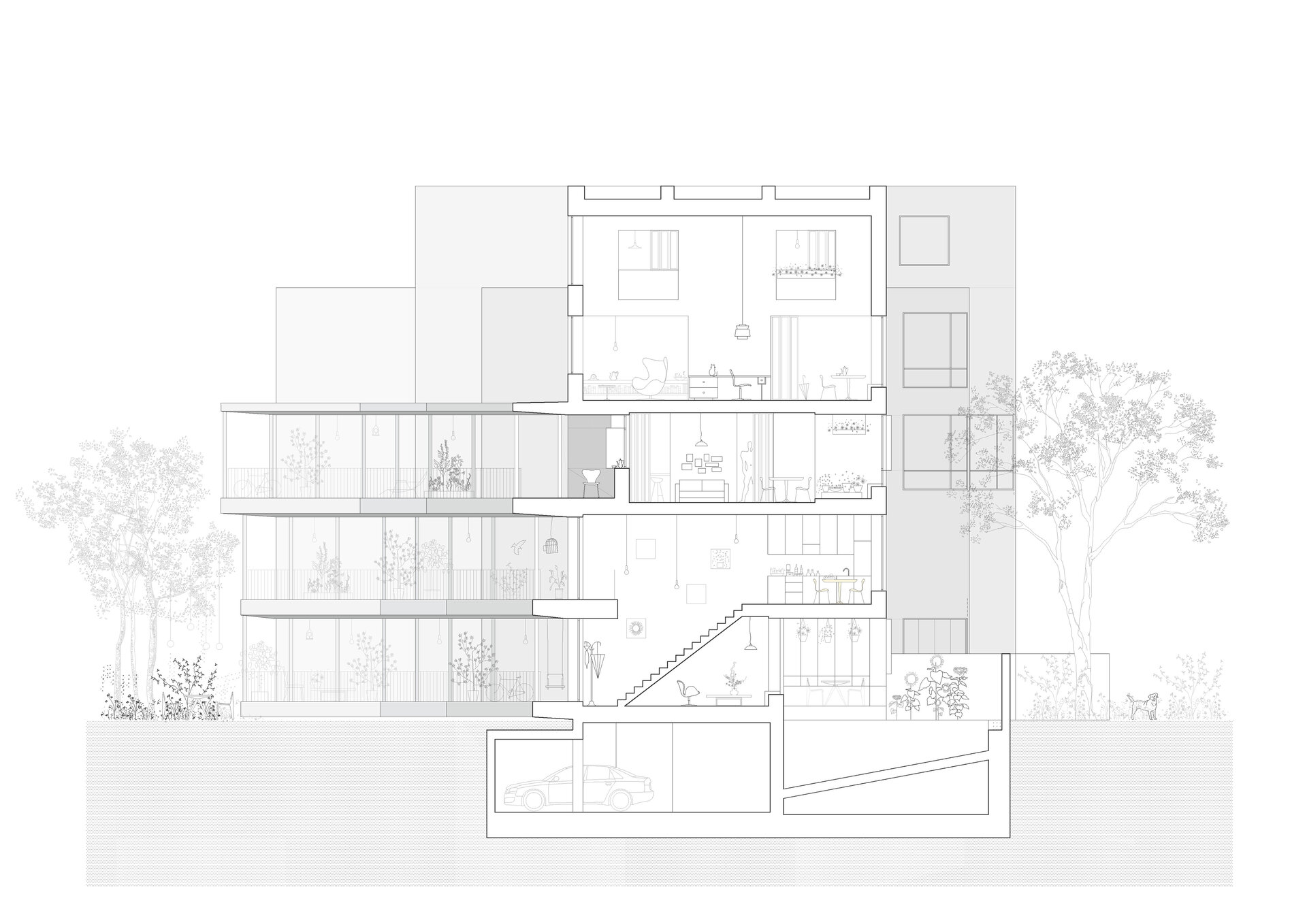