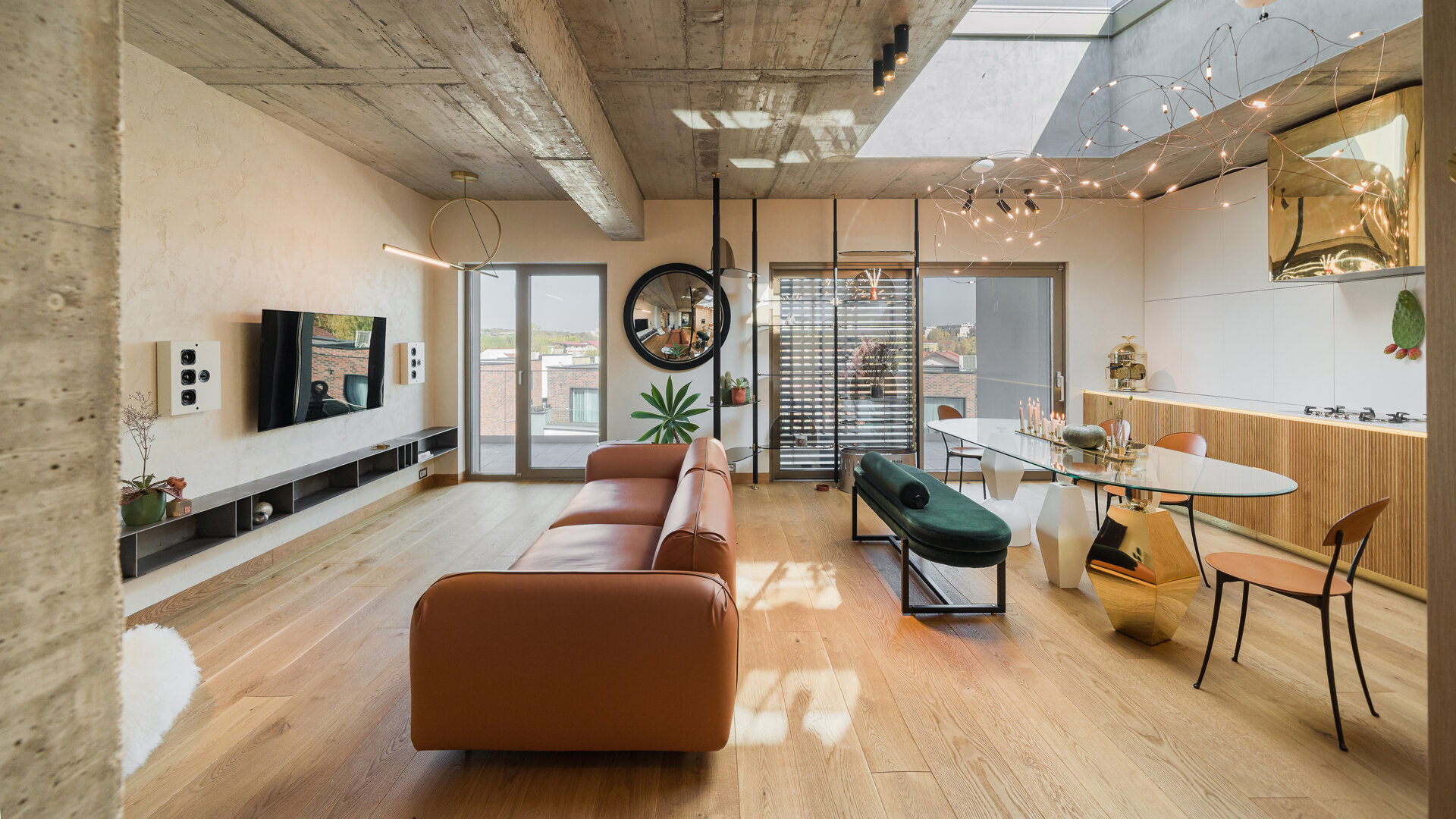 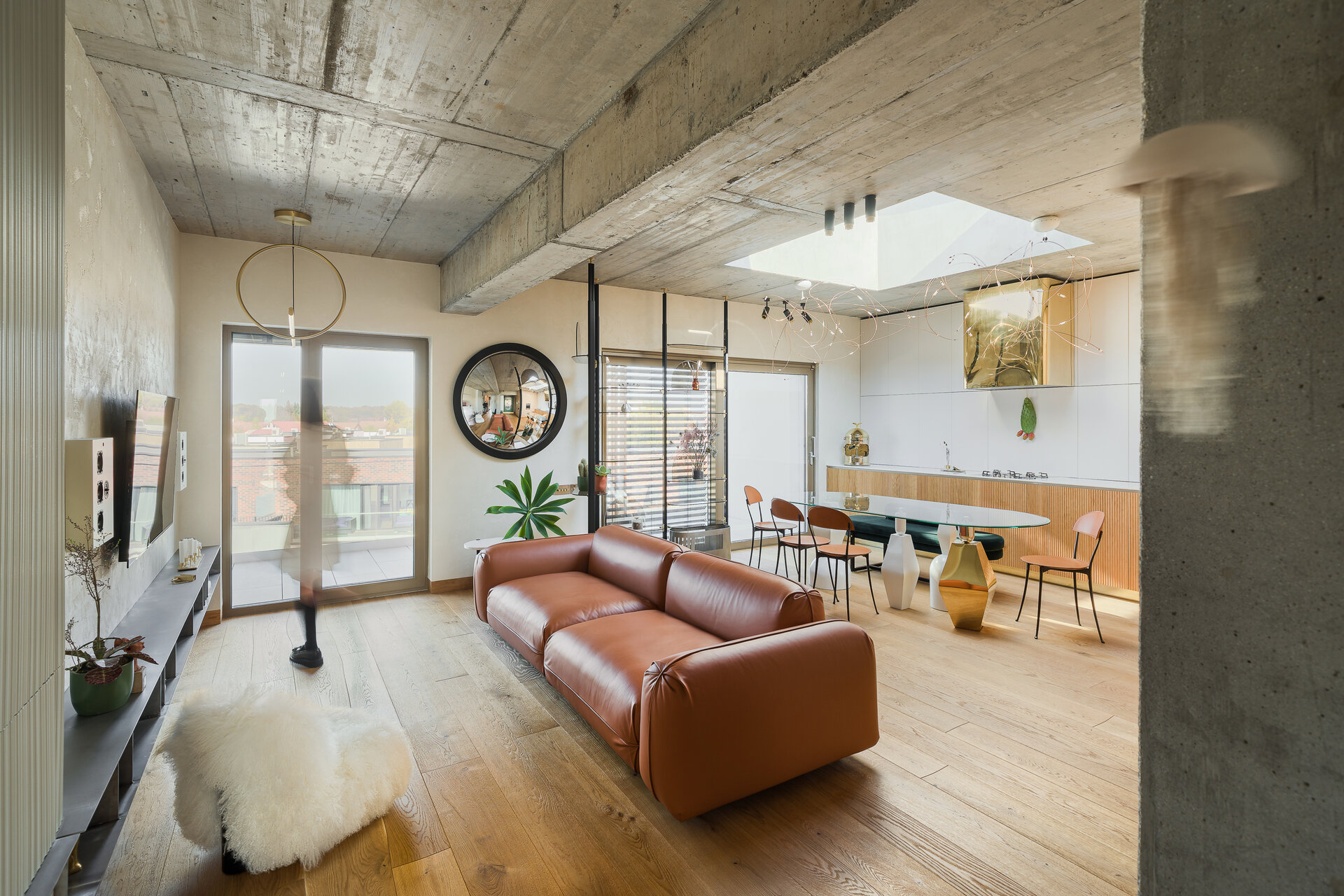 INTRODUCTION
"What the people of our time lack is the cosmic dimension, this feeling of the adventure of the spirit, beyond the apparent reality.
Today's people do not have the antenas to penetrate the true reality, the only reality that matters. They are deceived by appearances and stop at them. I'm not going further. Because it prevents him from this stupid need for security that cuts off the wings of adventure and protects the spirit in the prison of conformity.
Always, what sustained me was joy. In the most difficult circumstances of life, I knew how to find it on my way. I was singing. I knew what had to happen was going to happen. And nothing stopped me. On this feeling of the wonder that life represents, of joy, all my work is built. ” Constantin Brâncuşi - October 1938, Conversations with Ionel Jianu. Text published in the Royal Foundation Magazine, September 9, 1946.

I focused the first remodeling sketches on the complete recompartmentalization of the space, transferred the day area instead of the night one, a natural reaction coming from the desire to enter into an bright open space and then to make the transition to the night area.
I decided this change in order to optimize the entire surface, eliminating as much traffic spaces as possible, but also to give a more generous volume to the living area.
Thus, from a 4-room apartment, one was formed consisting of an open space with access hall, living room, dining room and kitchen with balcony, with a bedroom and a bathroom nearby, and the matrimonial area was transformed into a block composed of dressing room, bedroom, bathroom and a balcony overlooking the lake.
Taking advantage of the top floor, in addition to the repartitioning of the spaces, out of the desire to have natural light in all rooms, I proposed openings in the floor for the installation of skylights.

The resistance structure was left exposed, as result the electrical installations were drawn through the net before pouring the concrete. The connections of the electrical installations were made through plasterboard walls, as well as the air conditioning part was thought to be embedded in the walls. The routes of the thermal and sanitary installations were directed by the coarse screed and the distribution of the sanitary were vertically, thus, the installations does not intersect and does not communicate, all made to differentiate the layers by specialties.
A major challenge was the integration of the intelligent control system of the house so as not to betray its presence. Approximately 4 km of electrical cables, sensors incorporated in basic elements such as switches, sockets or taps, remote control for all equipment with high or low power supply were used. In the bathrooms were used audio systems over which we could apply classic finishes without affecting the required audio performance
To create a better acoustics but also a superior thermal comfort, we proposed that the insulation of the interior walls should be made with natural wool, purchased from local suppliers.
In fact, all the finishes applied, all the materials used resulted from the desire to bring particularity to the project. To tame the raw concrete ceilings, the walls and floors were covered with wood, curved in some areas, brass, white cement terrazzo in warm shades or combined with textures from natural materials such as lime, sand and glass. Their purpose was to create a calm and warm background for the whole ensemble.
Natural cowhide was applied on the elements of the interior carpentry, but also on the wall in the master bedroom, a material that can create controversy in discussions, but the prospect of using elements / materials as our ancestors did can be thought of in the key using a whole range of available, sustainable, ecological and last but not least, quality resources.
DEDICATED FURNITURE
The metal parts with or without glass elements, eg: living console, dining table, hood, glazing, are made in local workshops according to their own design. I imagined them as the main elements of the spaces framed in a base with a minimalist but textured background.
The furniture uses simple lines, in the natural texture of the wood, bringing its own contribution through milled elements, painted in solid colors or only oiled.
I took the kitchen assembly out of the known classic pattern: basic and suspended bodies between which a certain finish is mounted.
We designed the upper part on the entire available height, thus creating a neutral wall, the base for the brass hood, at the same time behind the fronts hiding generous storage spaces.
LIGHTING
If it had been possible, this house would have been transformed into a greenhouse dressed in natural light.
During the day, no artificial sources are needed for interior lighting, at most only accent points rendered from LED projectors are used, meant to accentuate the finishes or decorative elements. For winter evenings, in addition to projectors, we added central, distinct lighting elements.
CONCLUSION
The apartment combines materials with contrasting features such as wood and concrete, brass, stainless steel and leather, raw and processed, but all natural, based on the idea of sustainability. The materials have become predominant and present, in order to satisfy the requirement of the beneficiaries, that of having a house that will change its appearance with the passing of the years.
The same approach to the project was applied from the big picture to every particular detail, from the structure to the large or small pieces of furniture, offering the client a constant experience of revealing the space every day, differently. 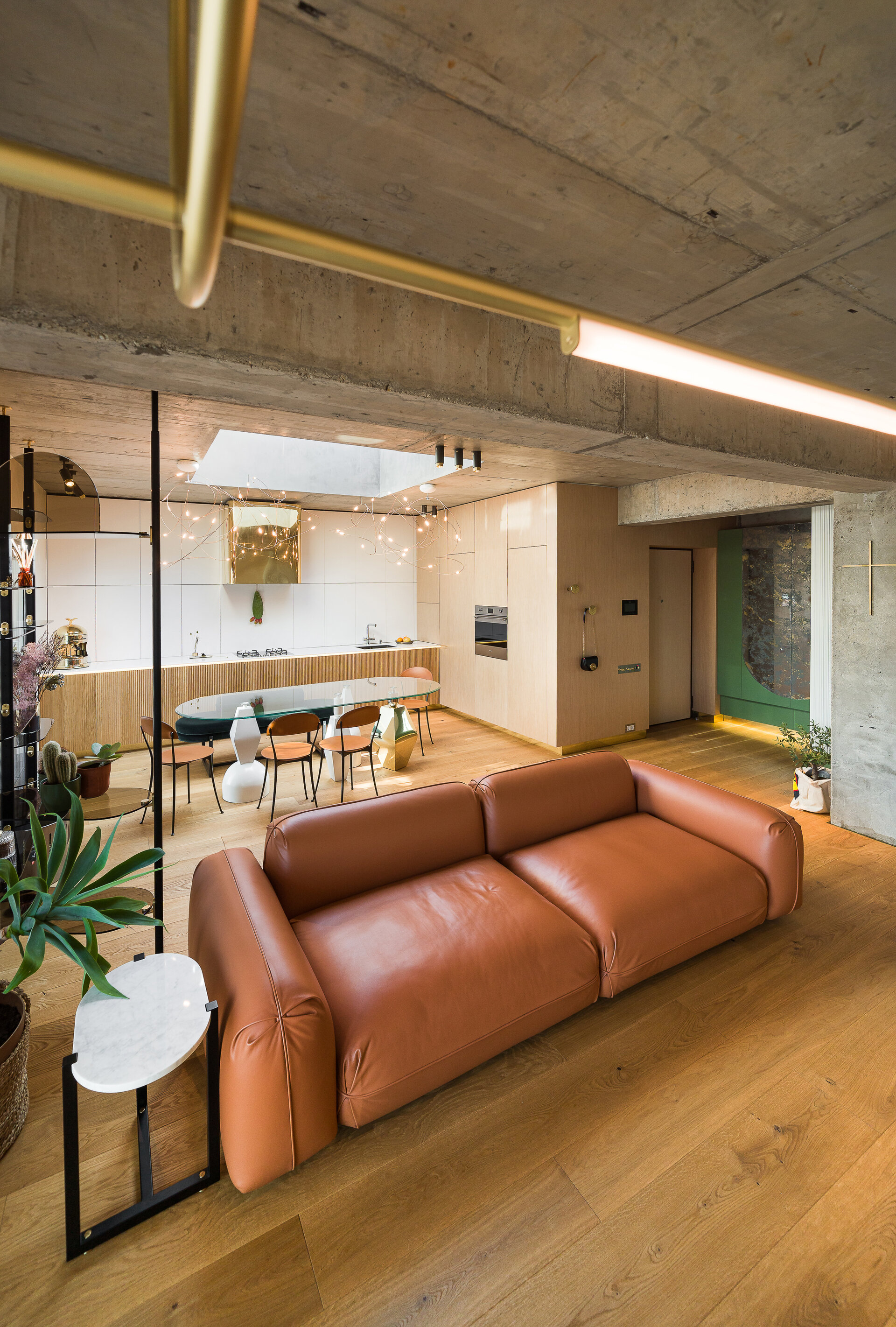 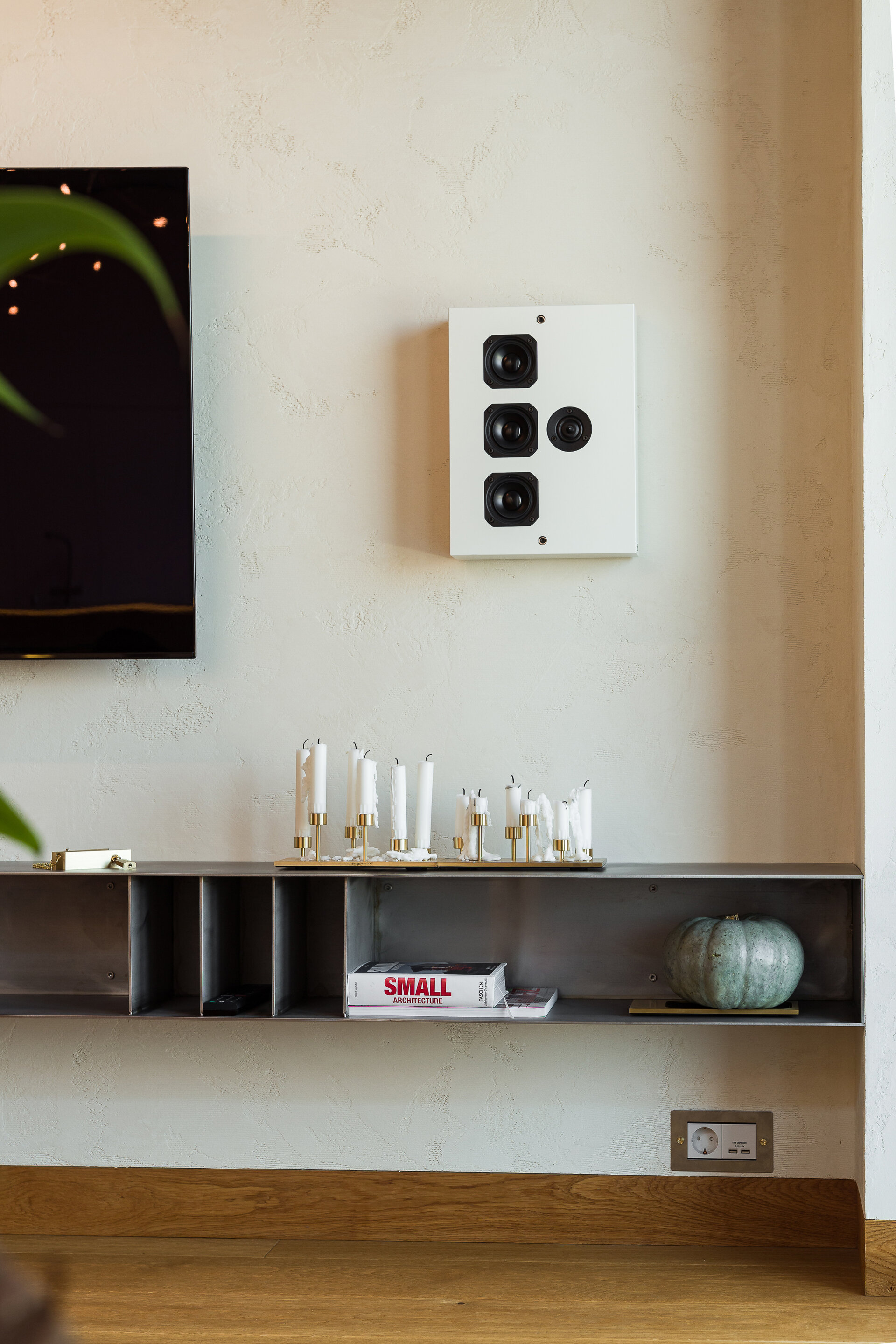 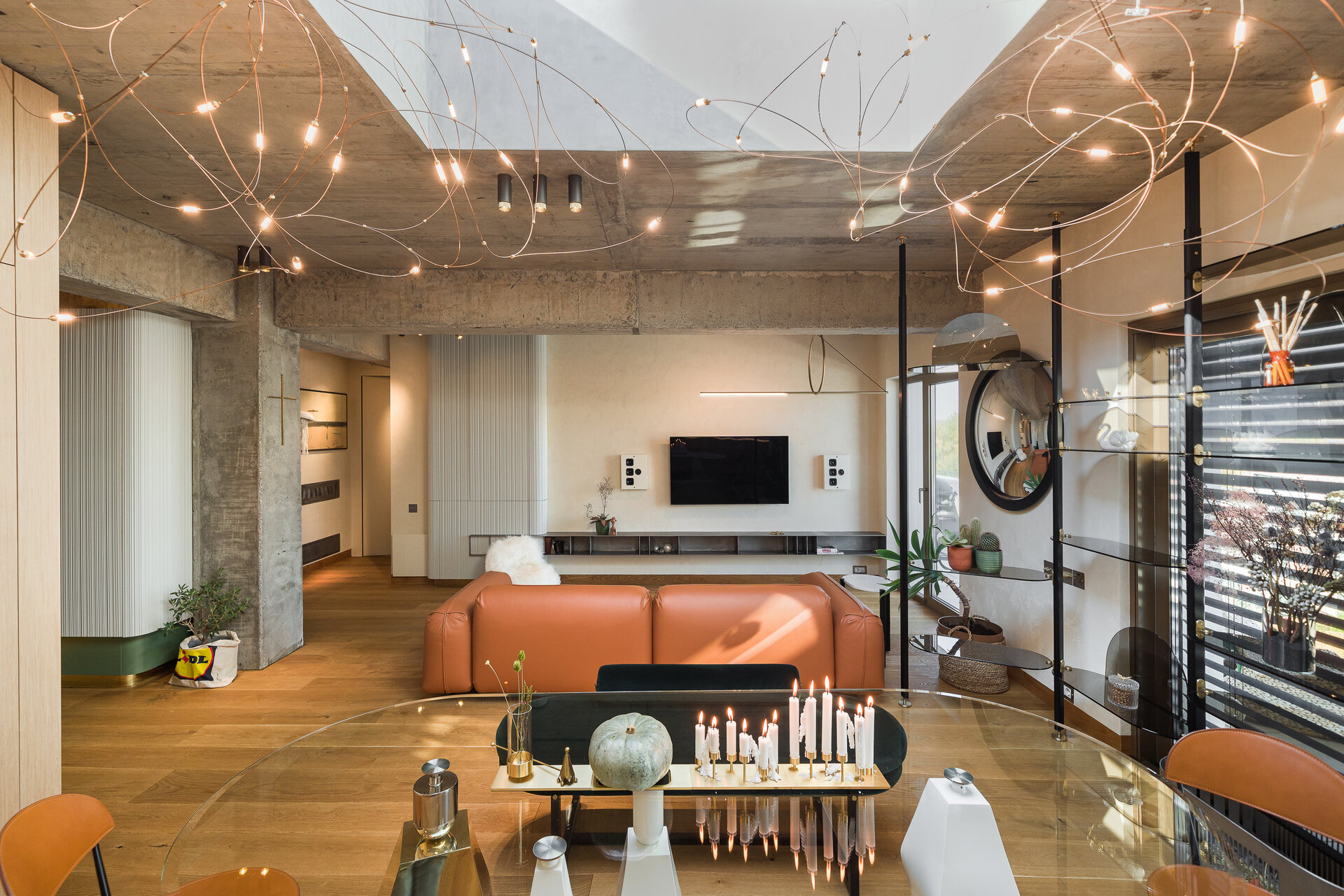 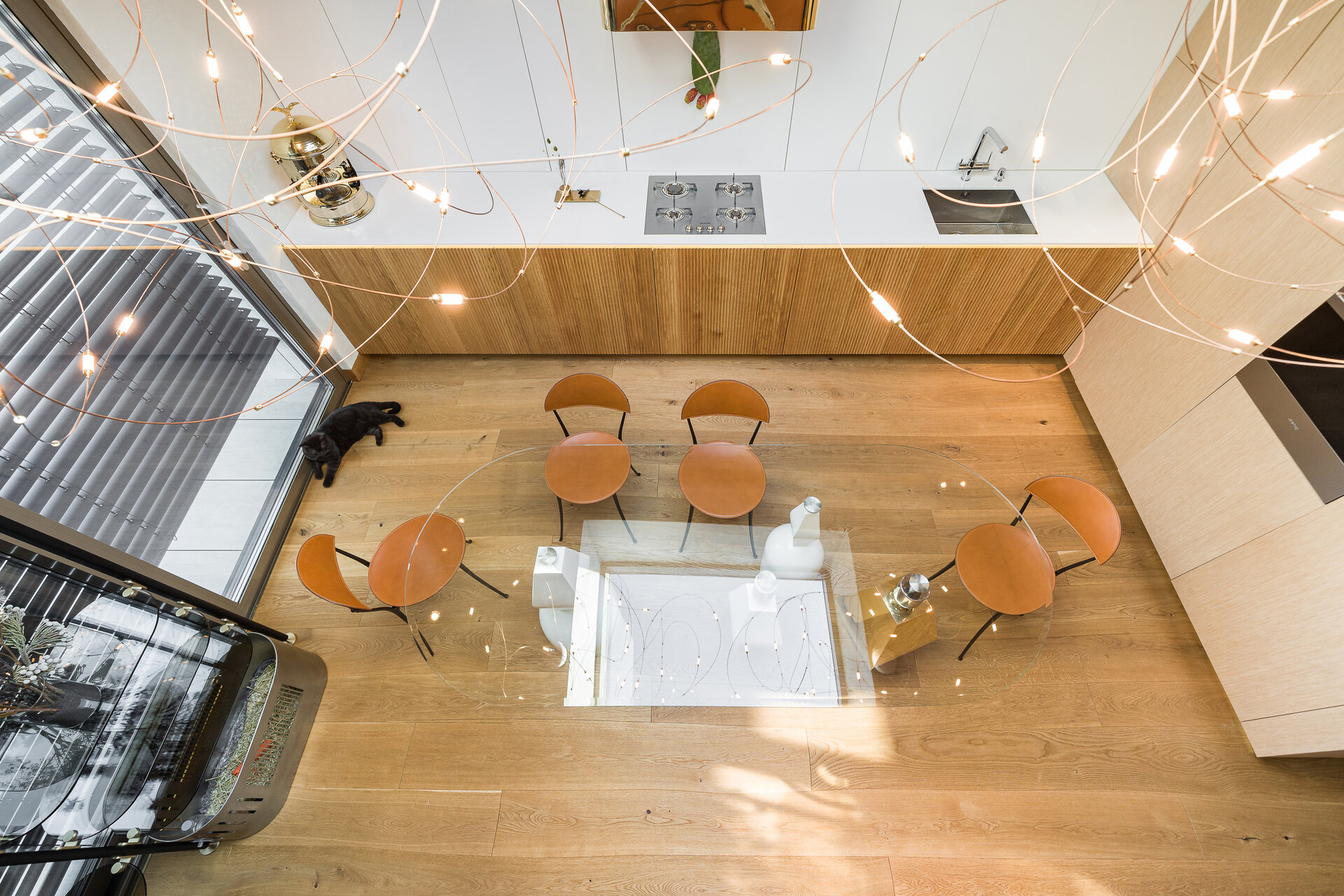 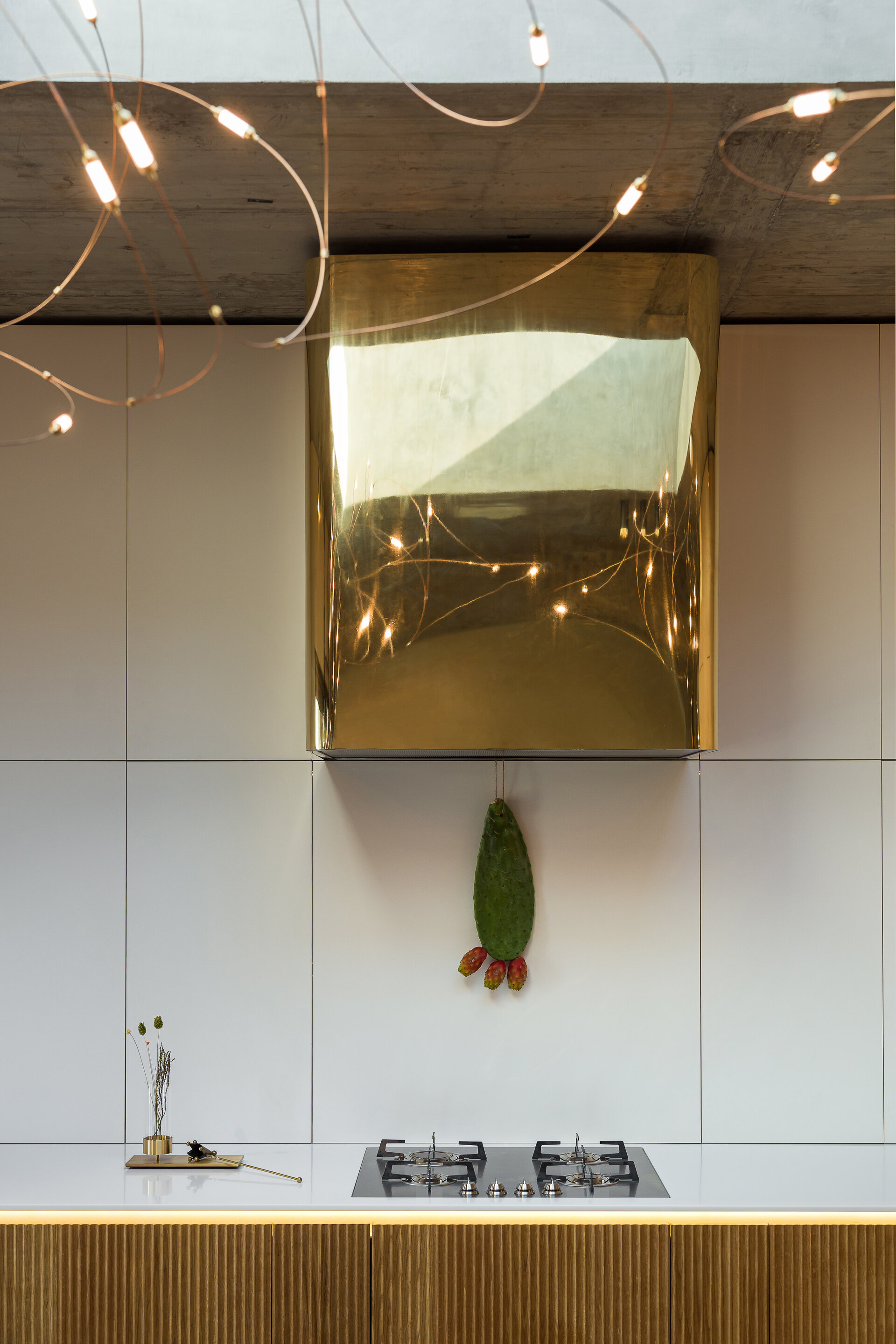 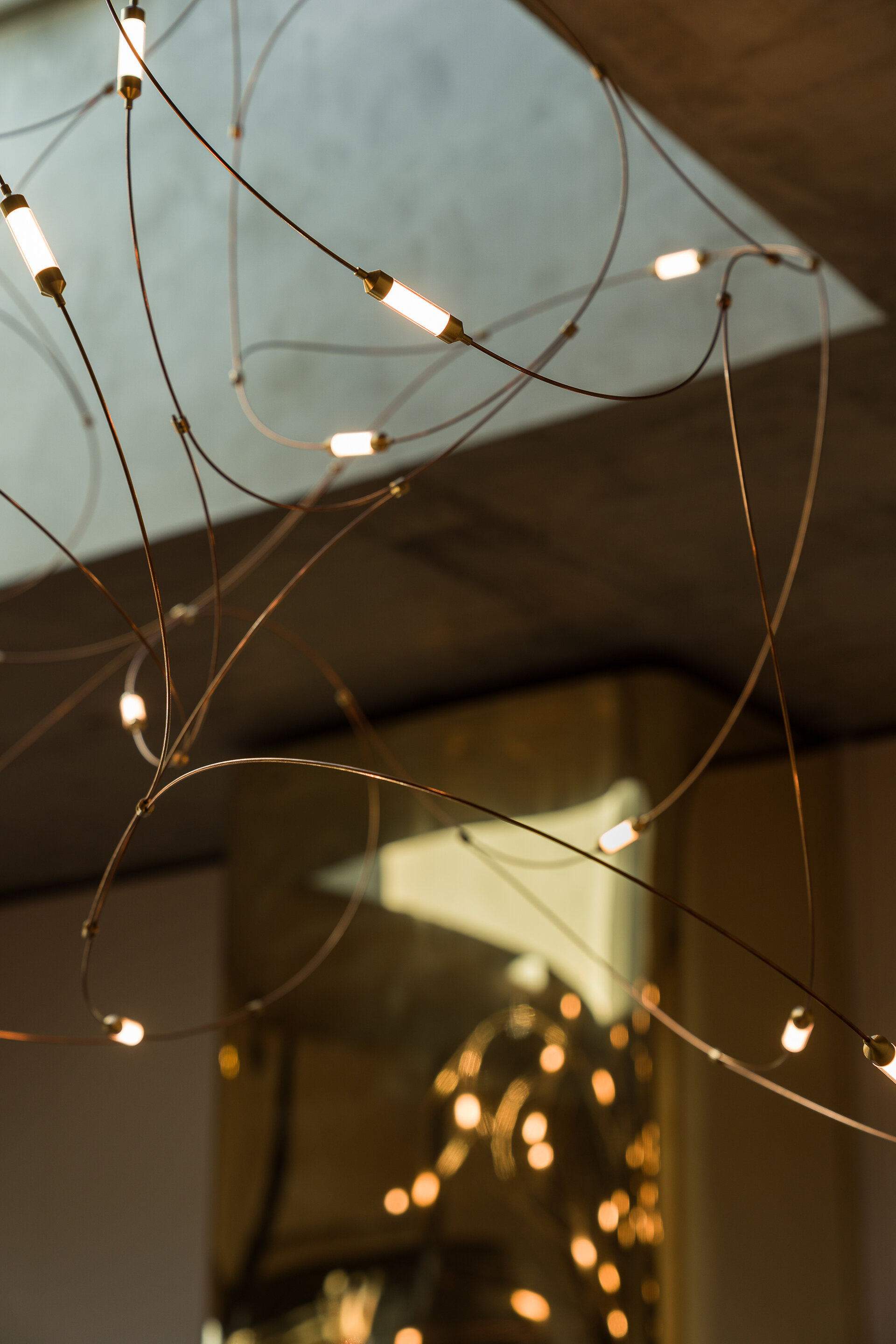 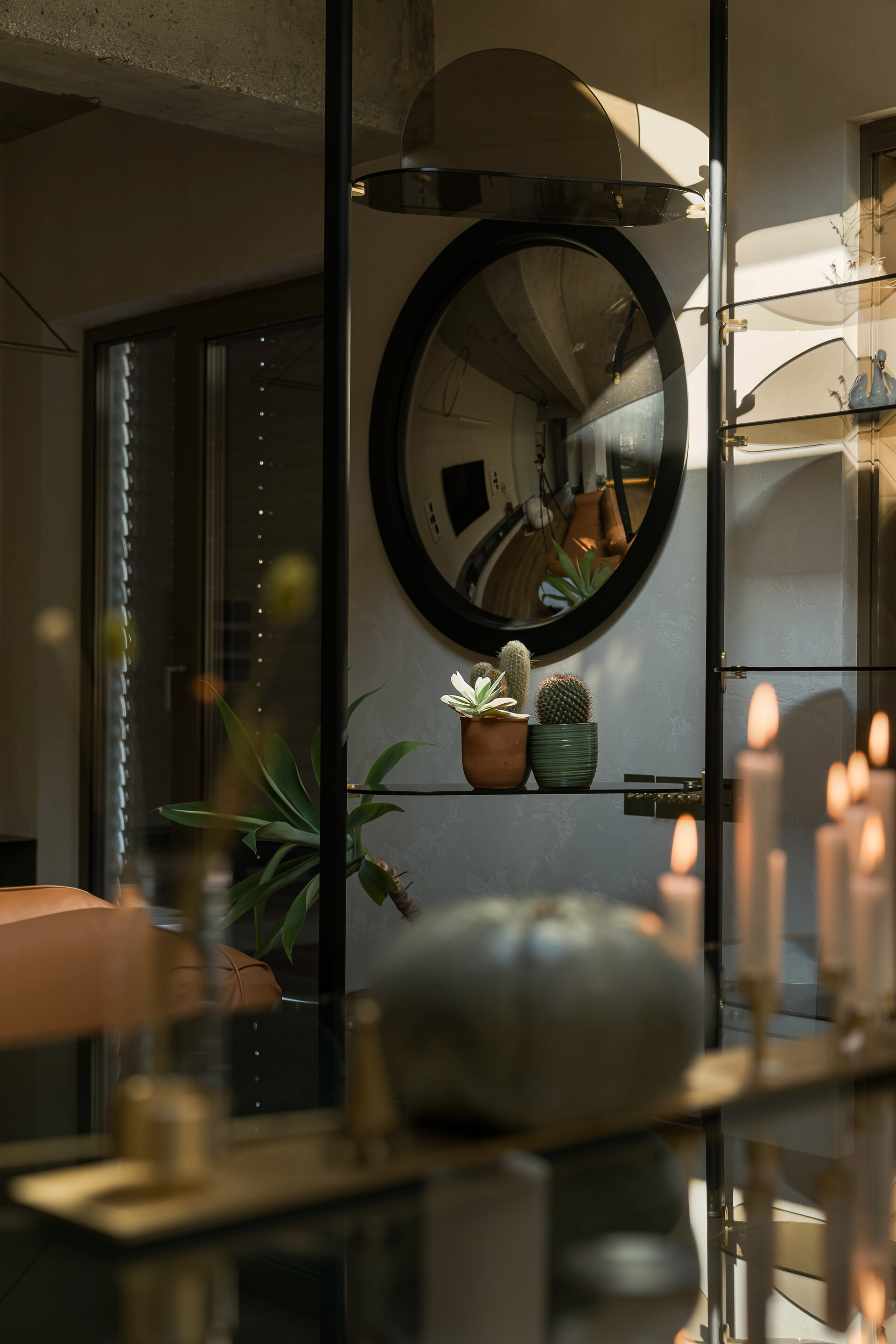 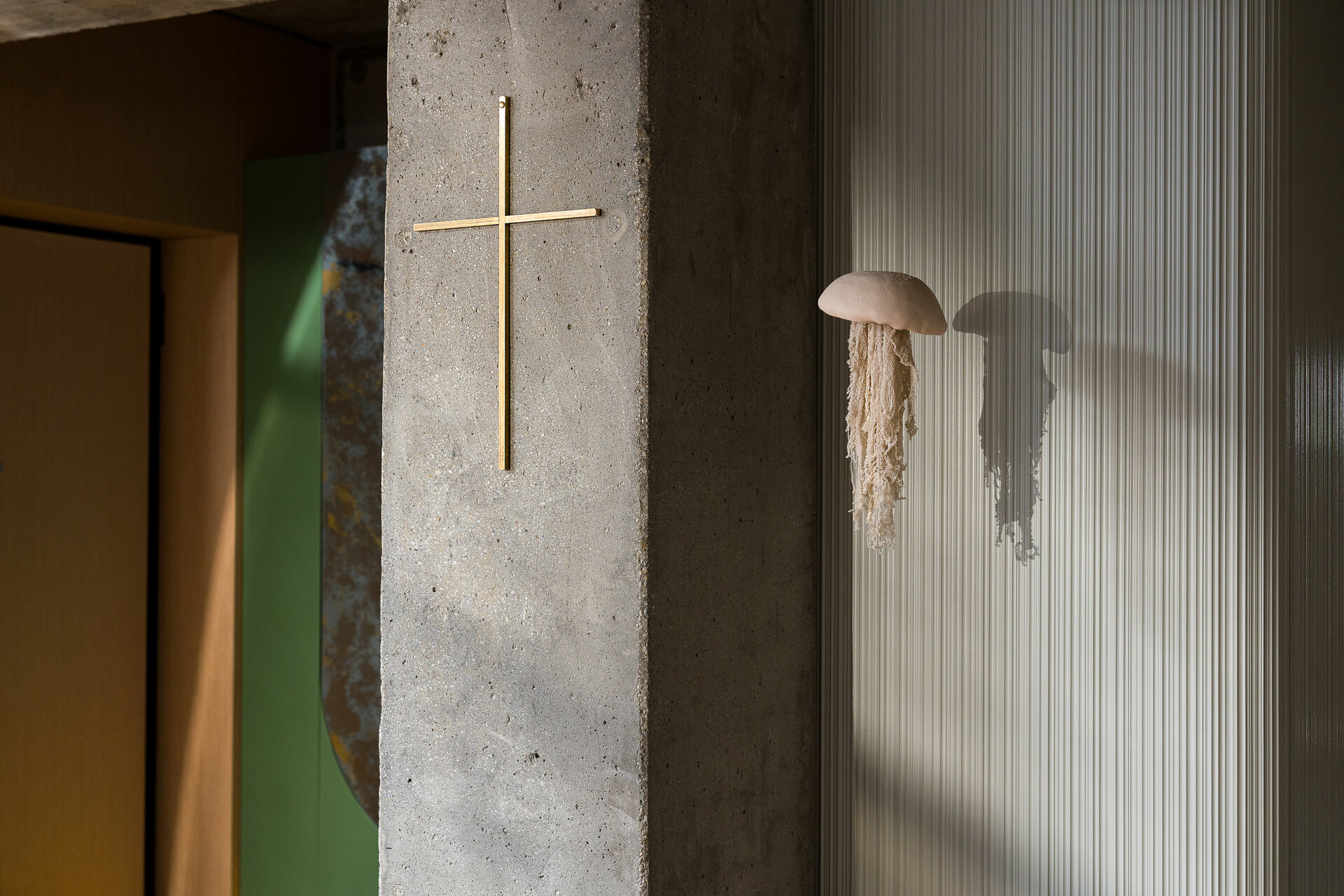 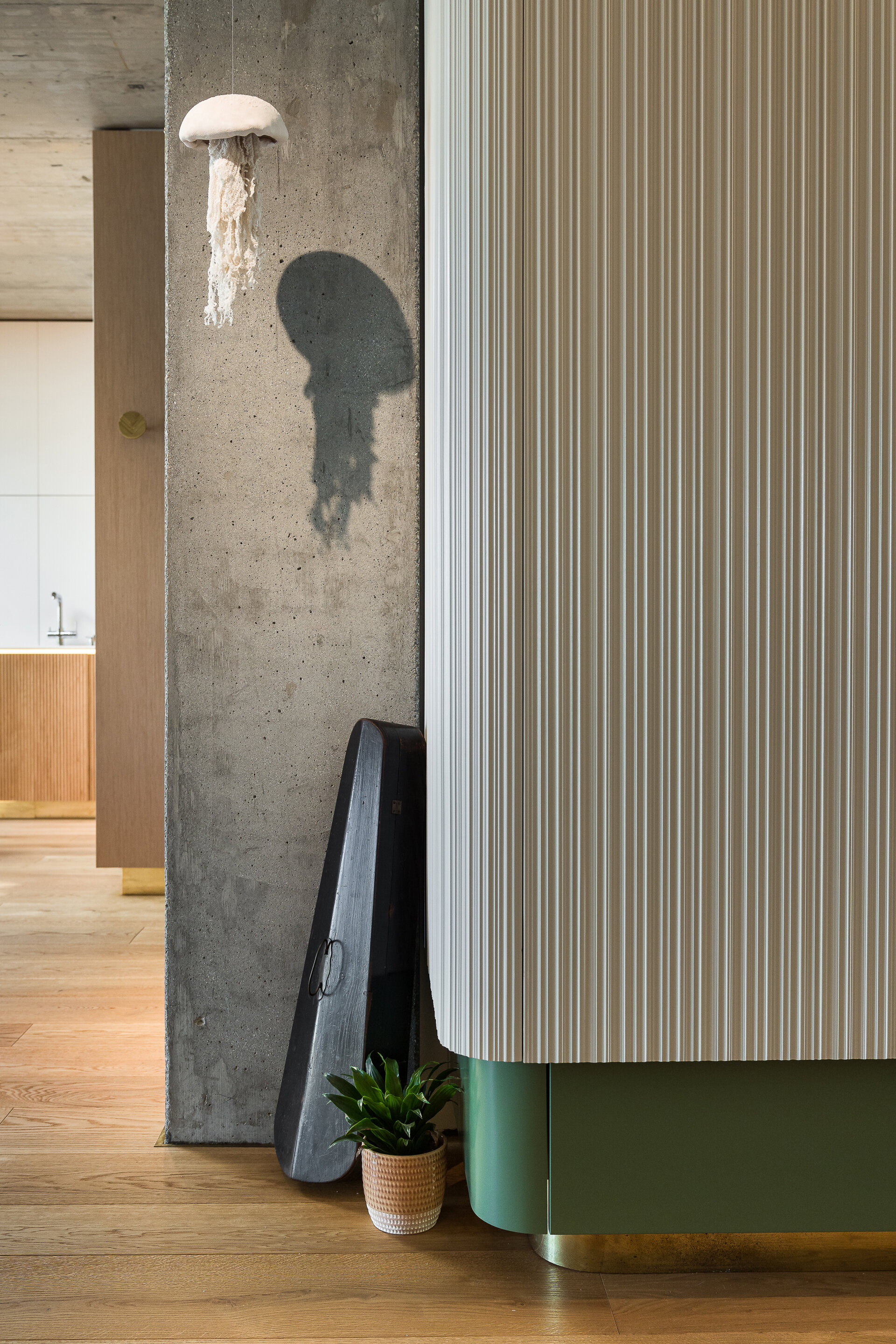 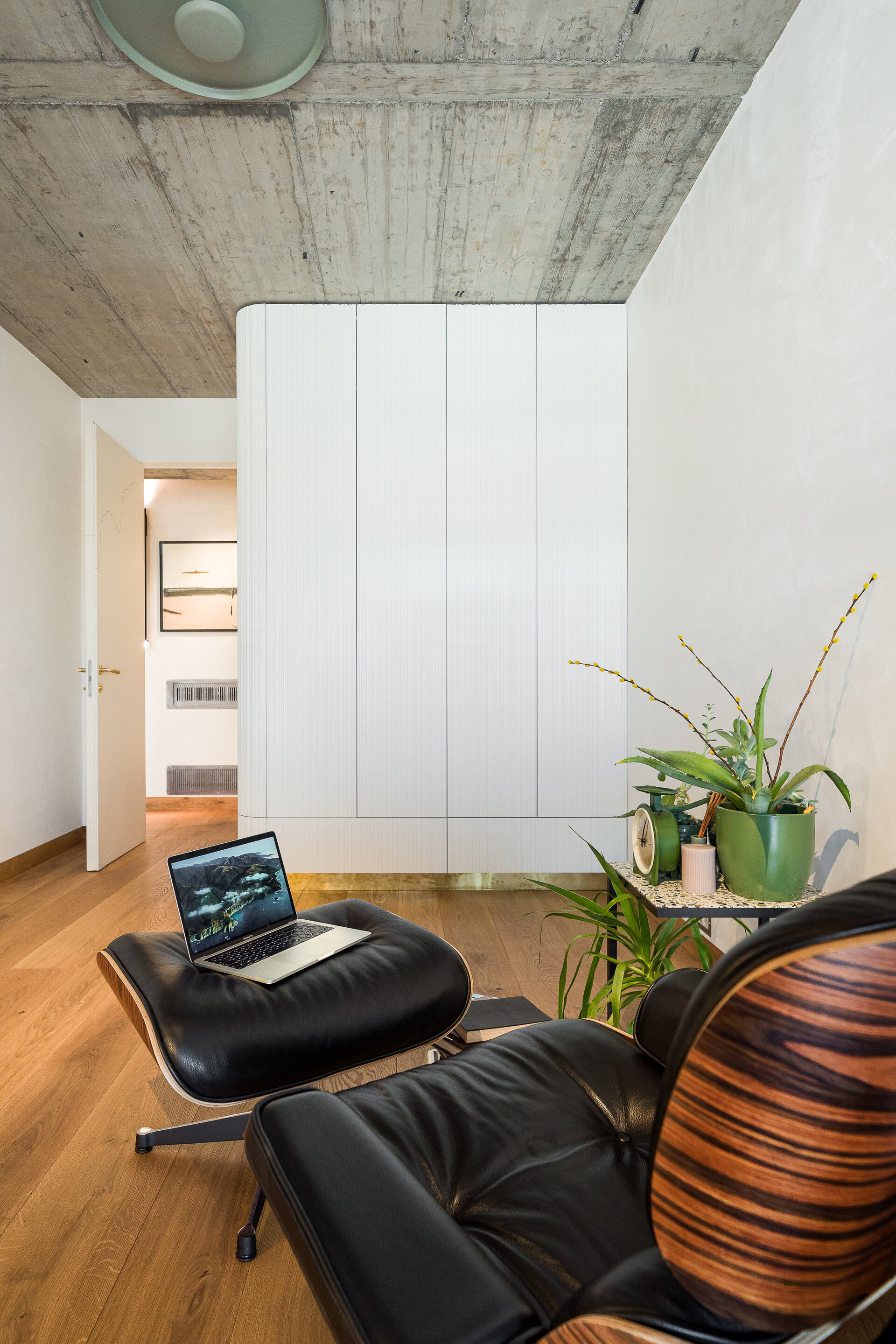 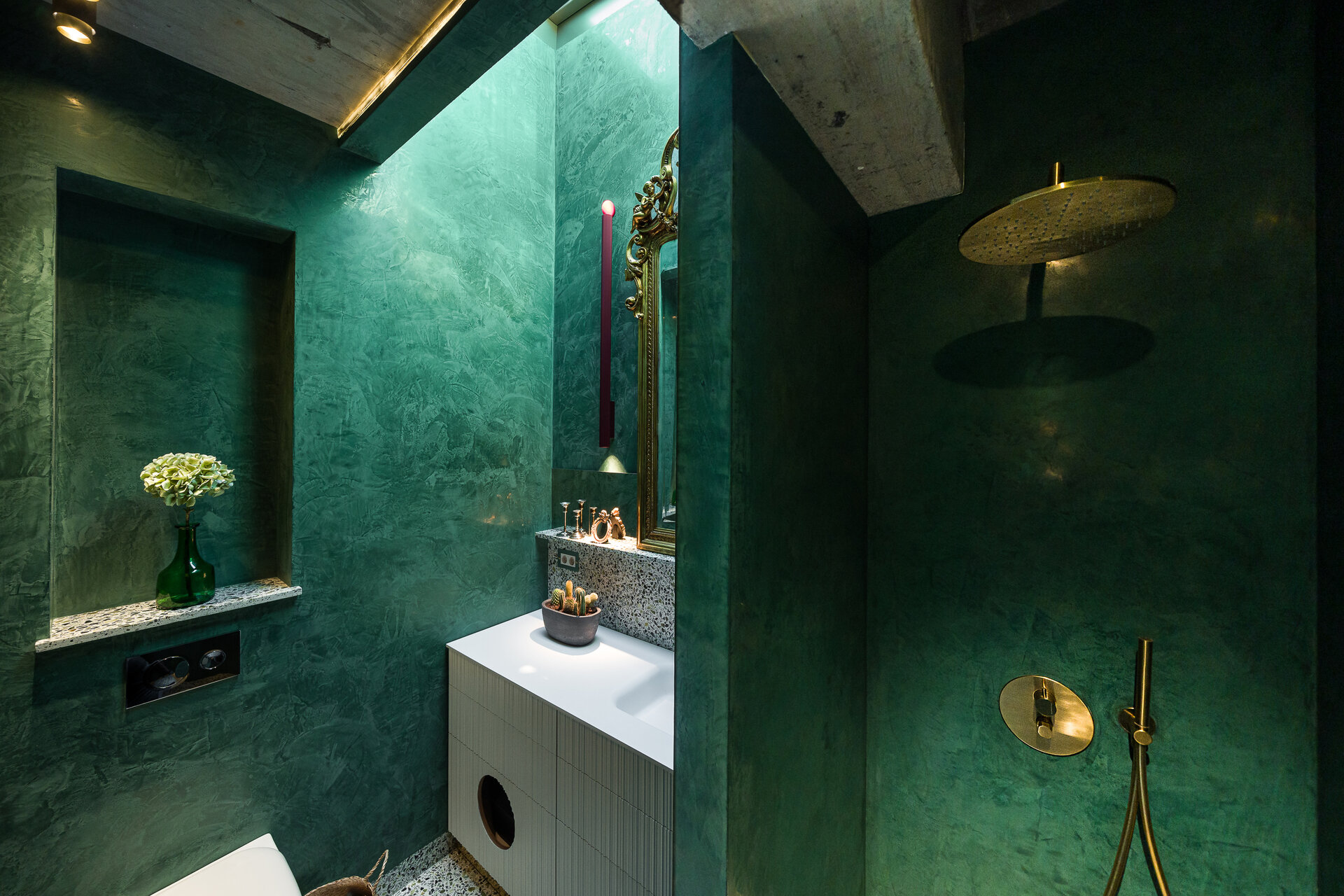 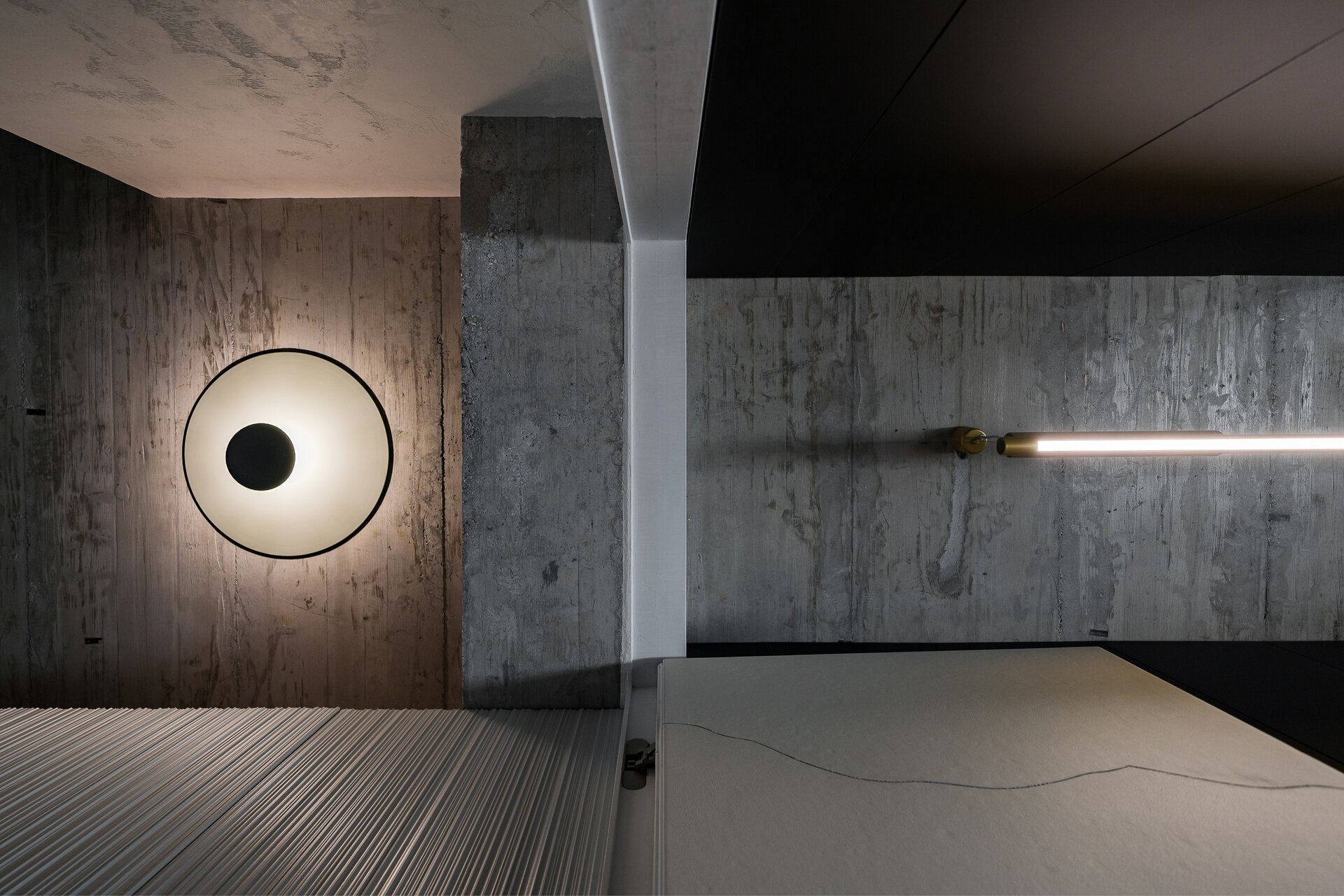 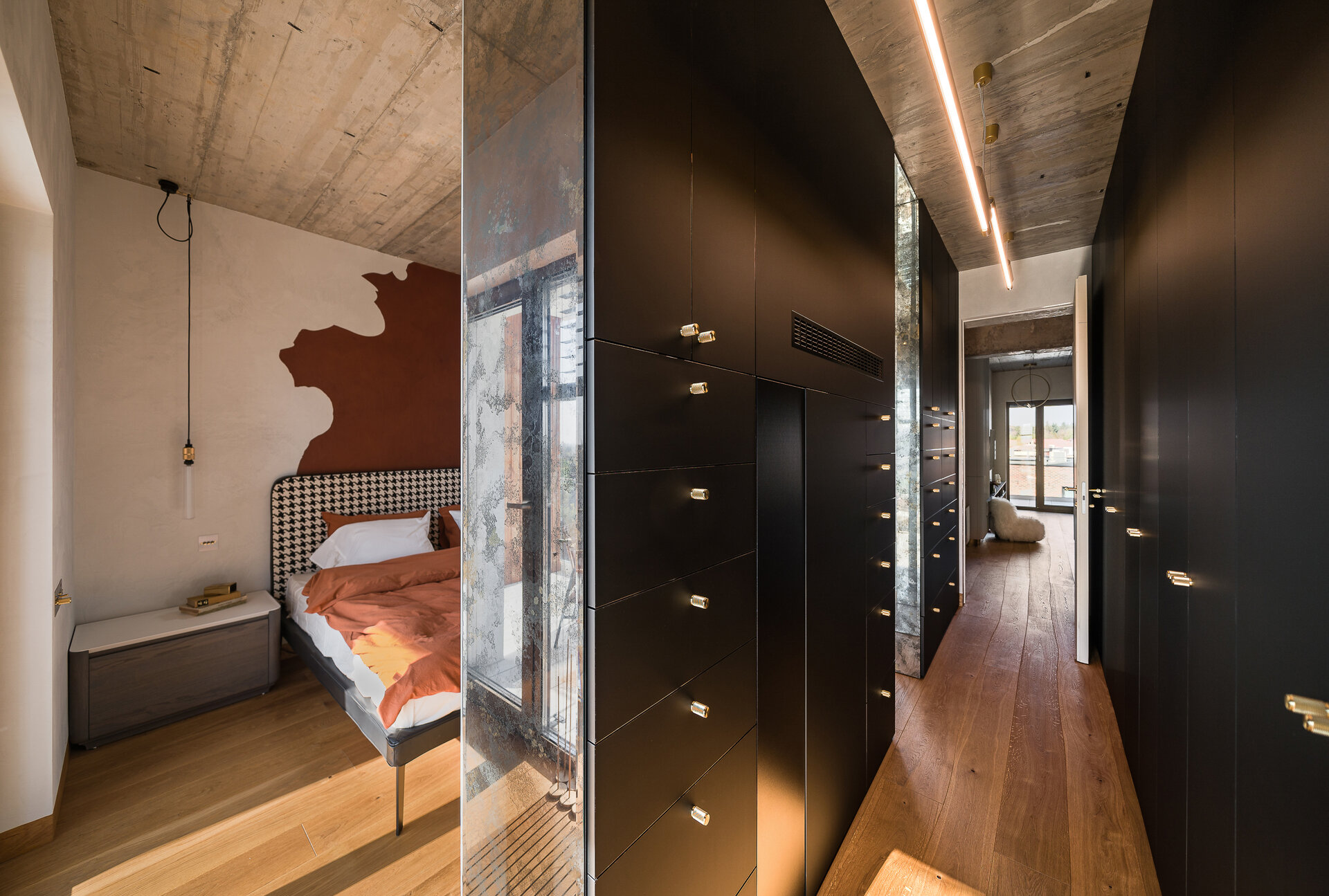 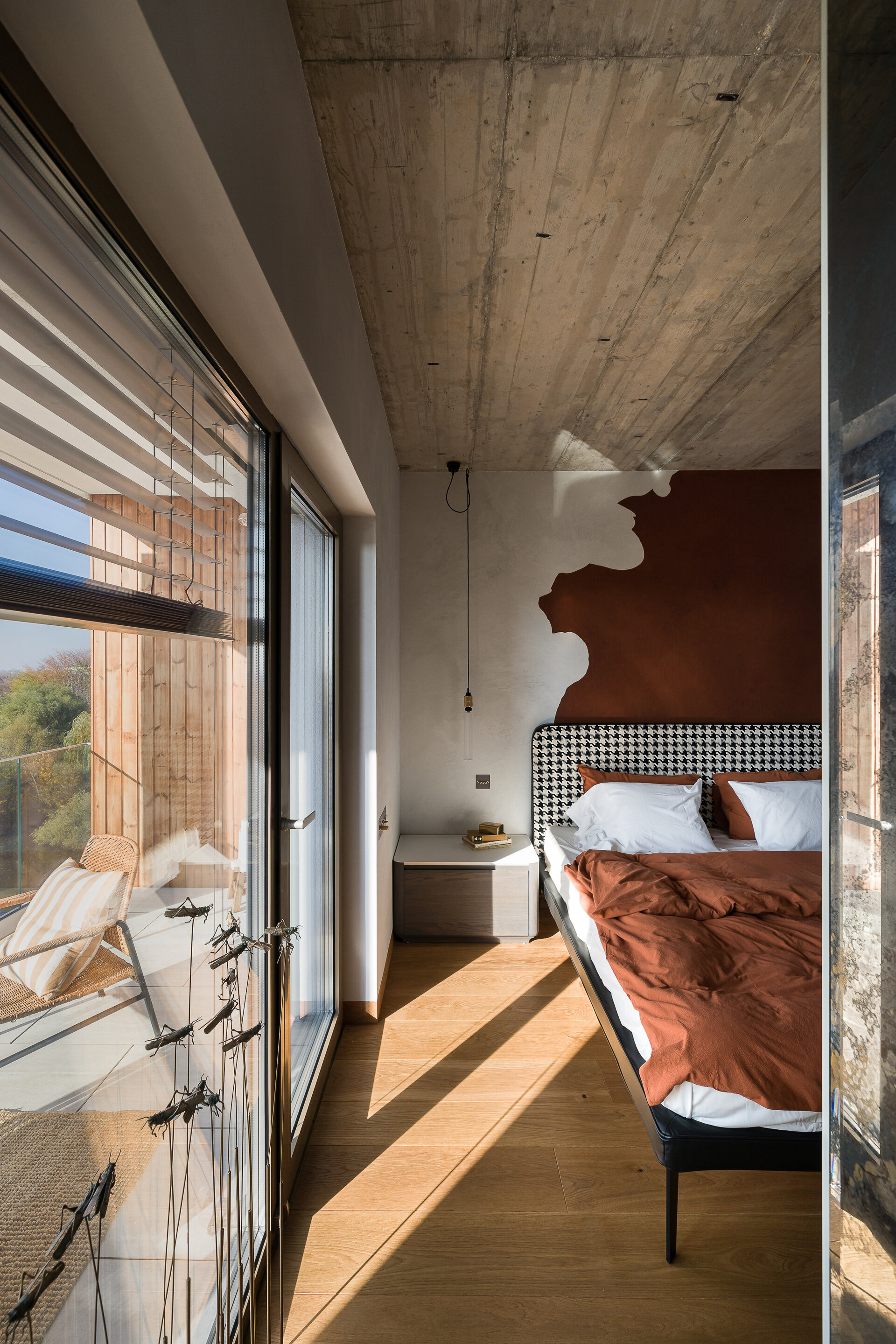 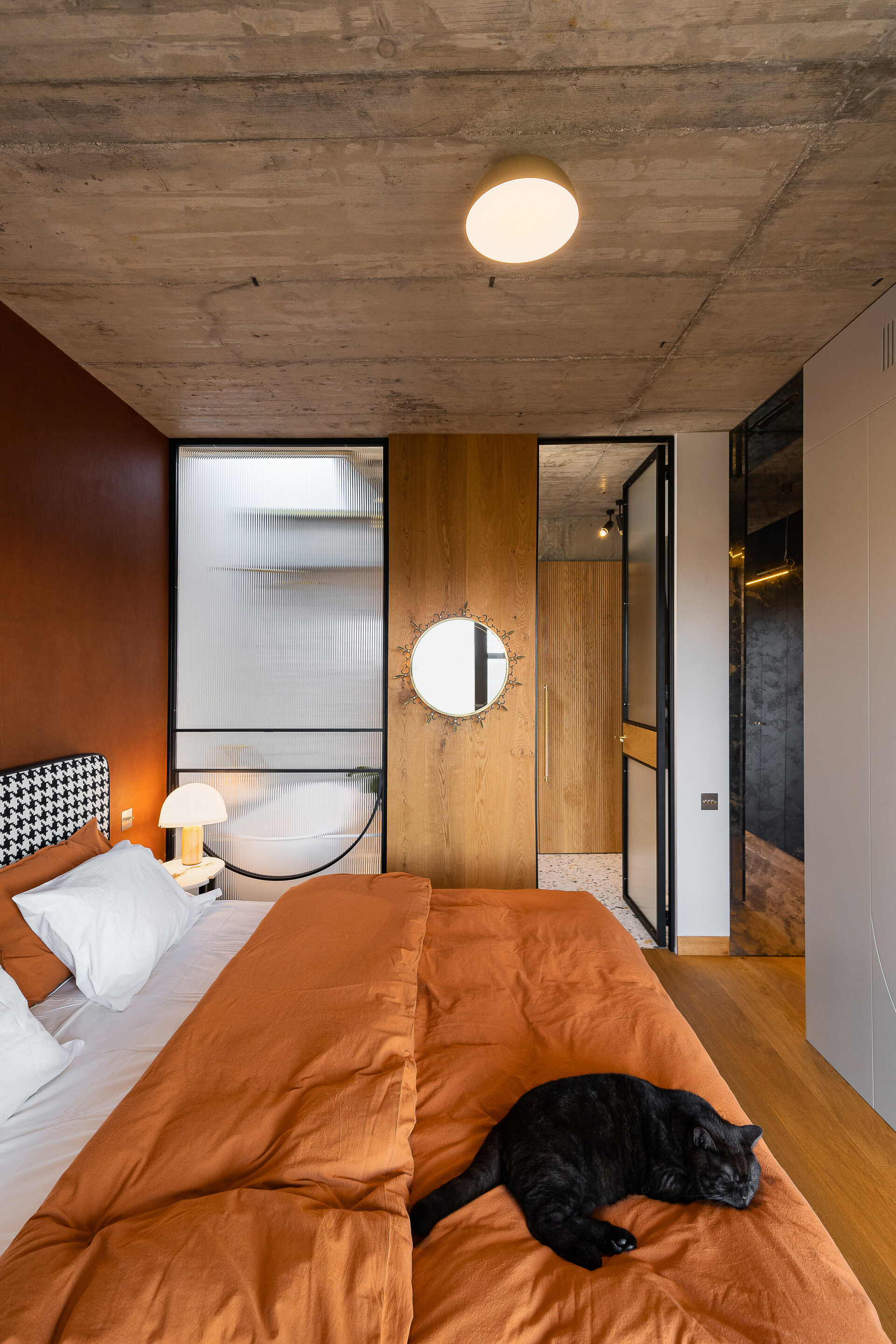 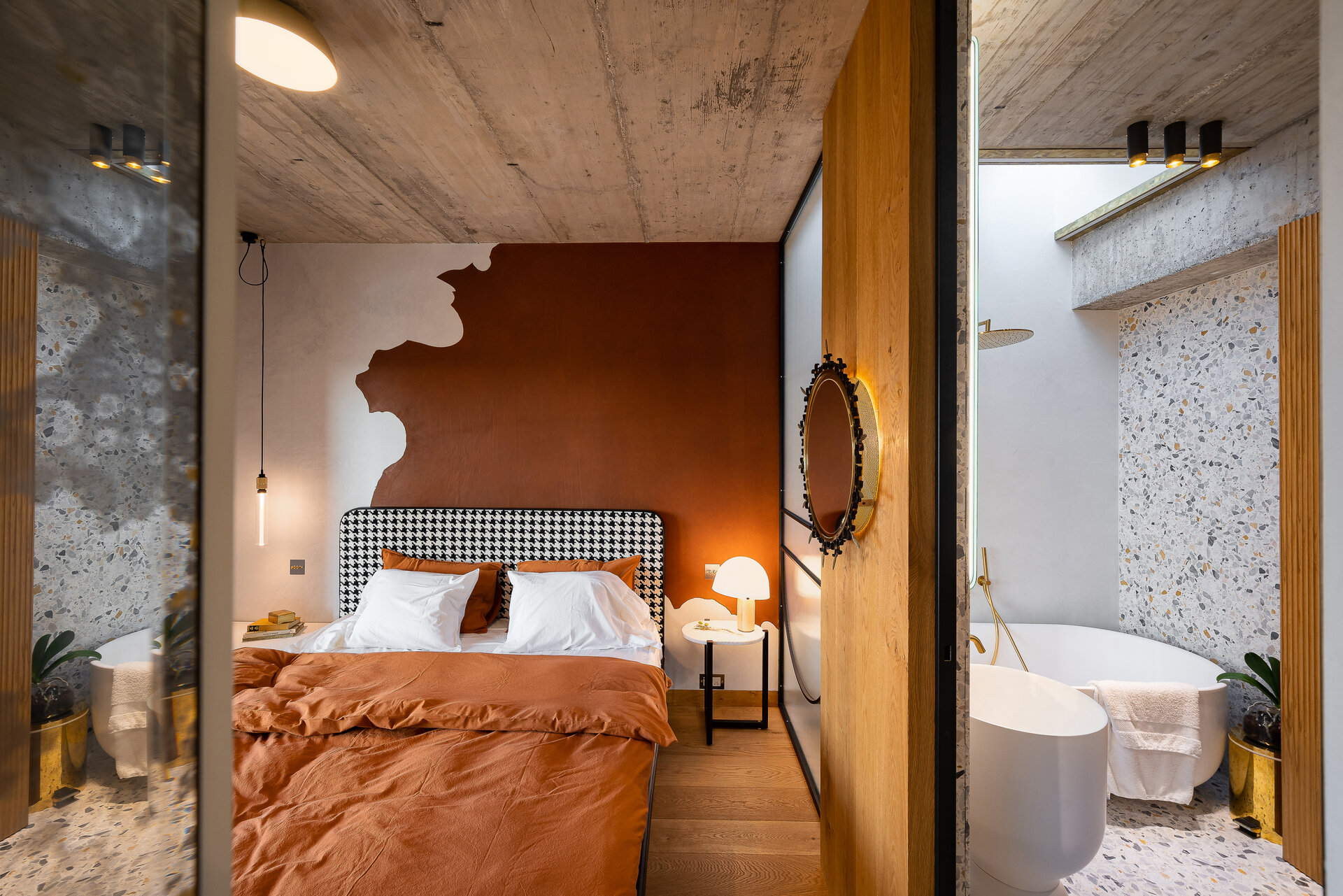 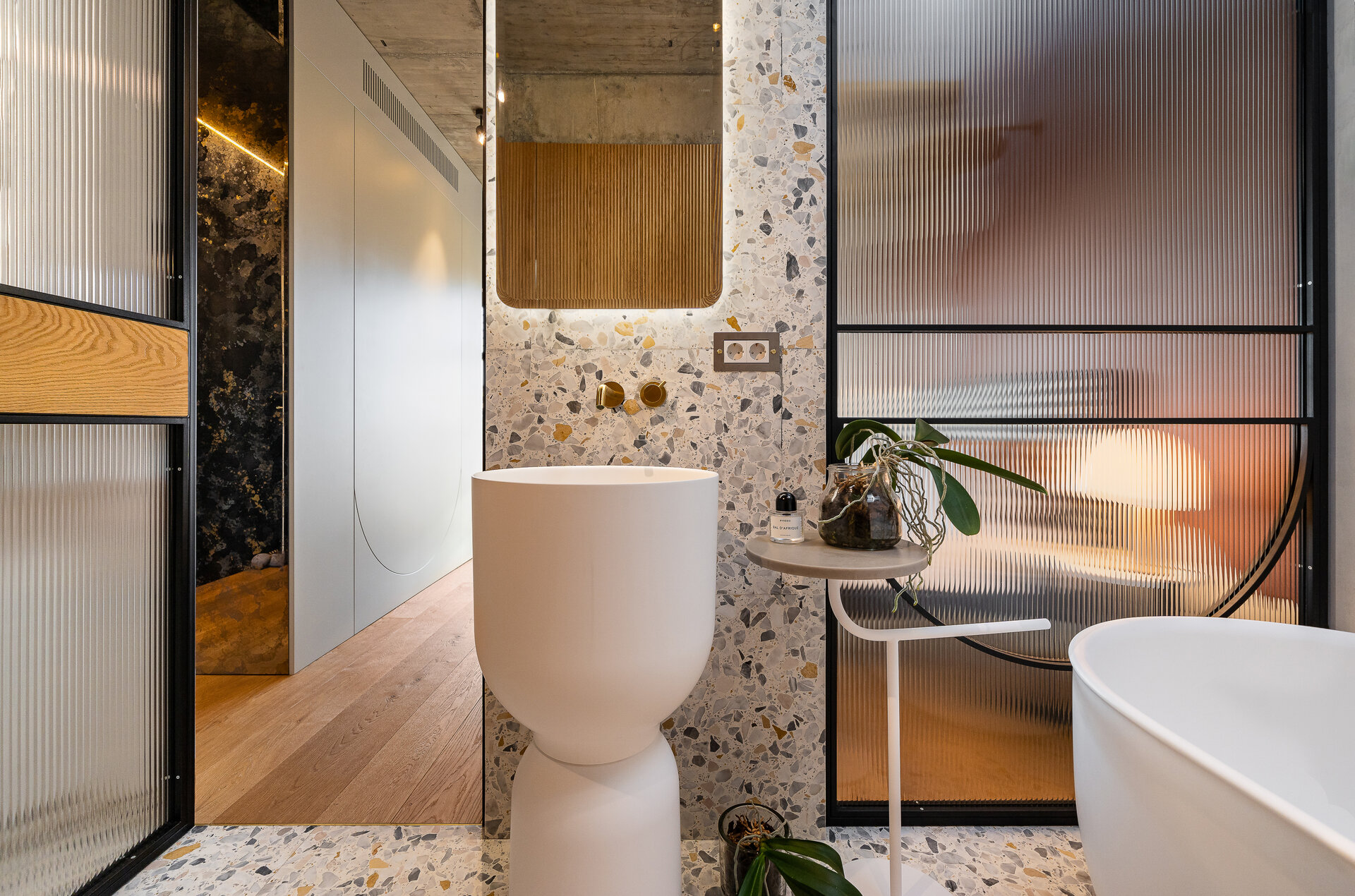 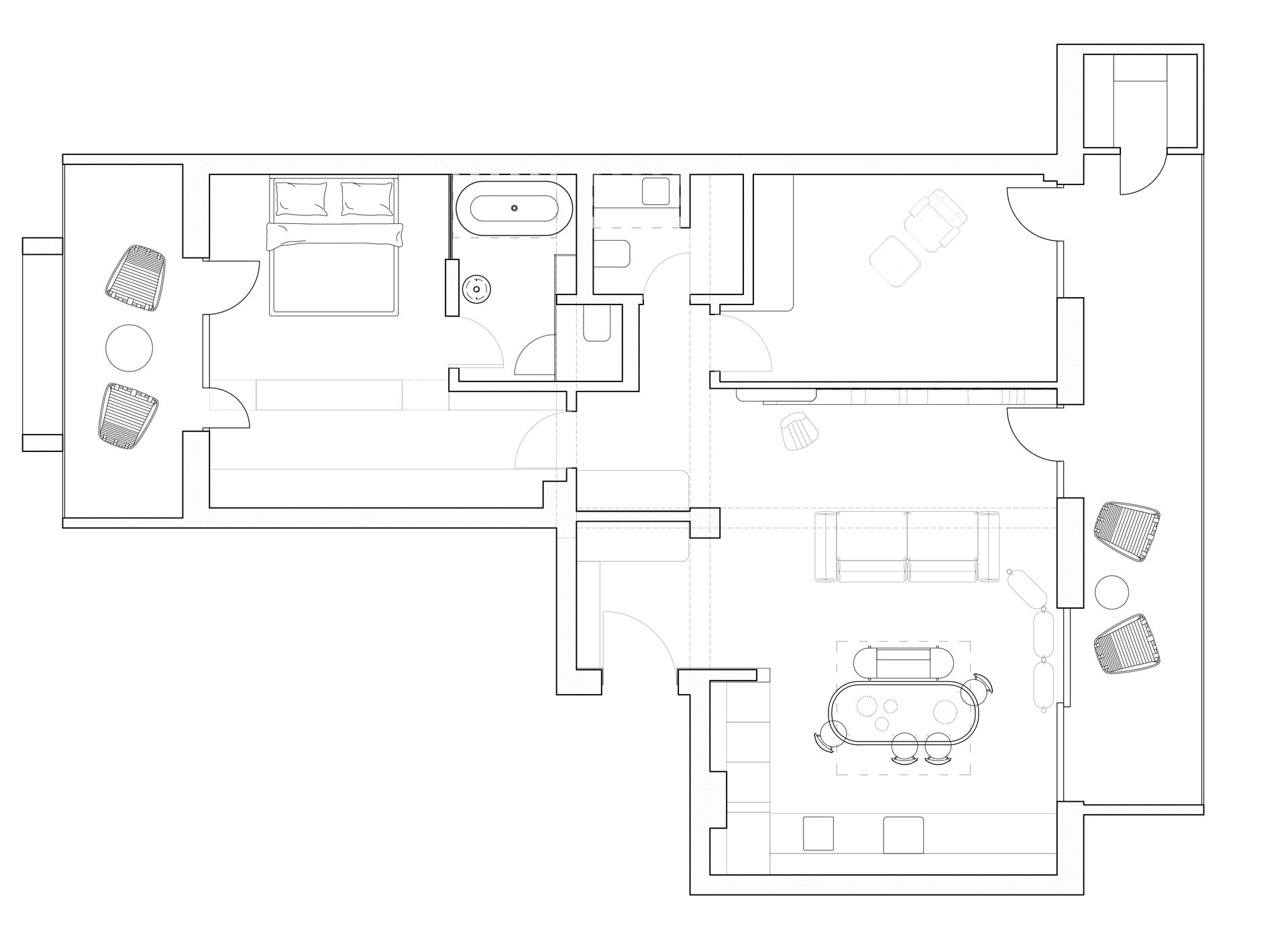