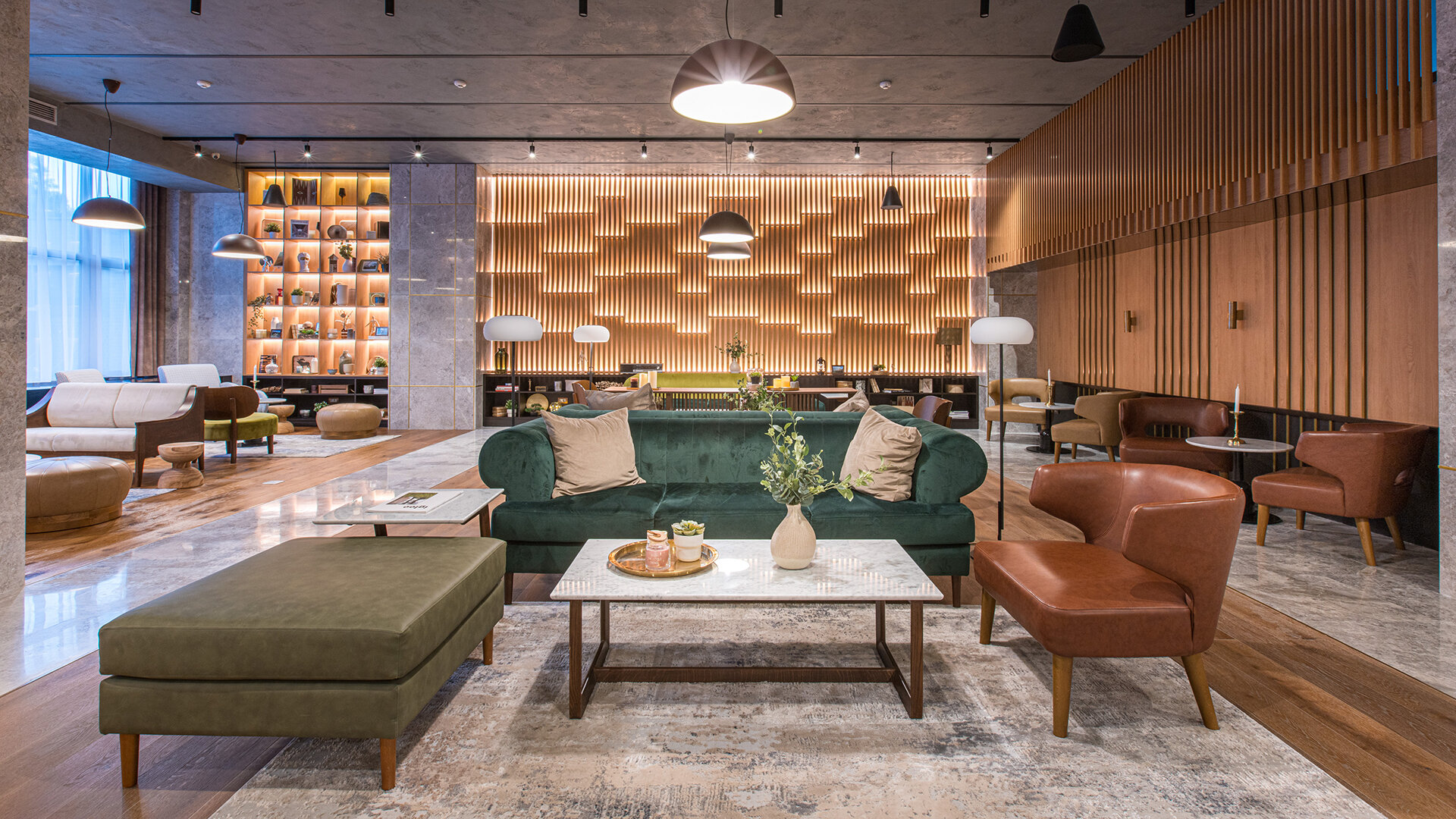 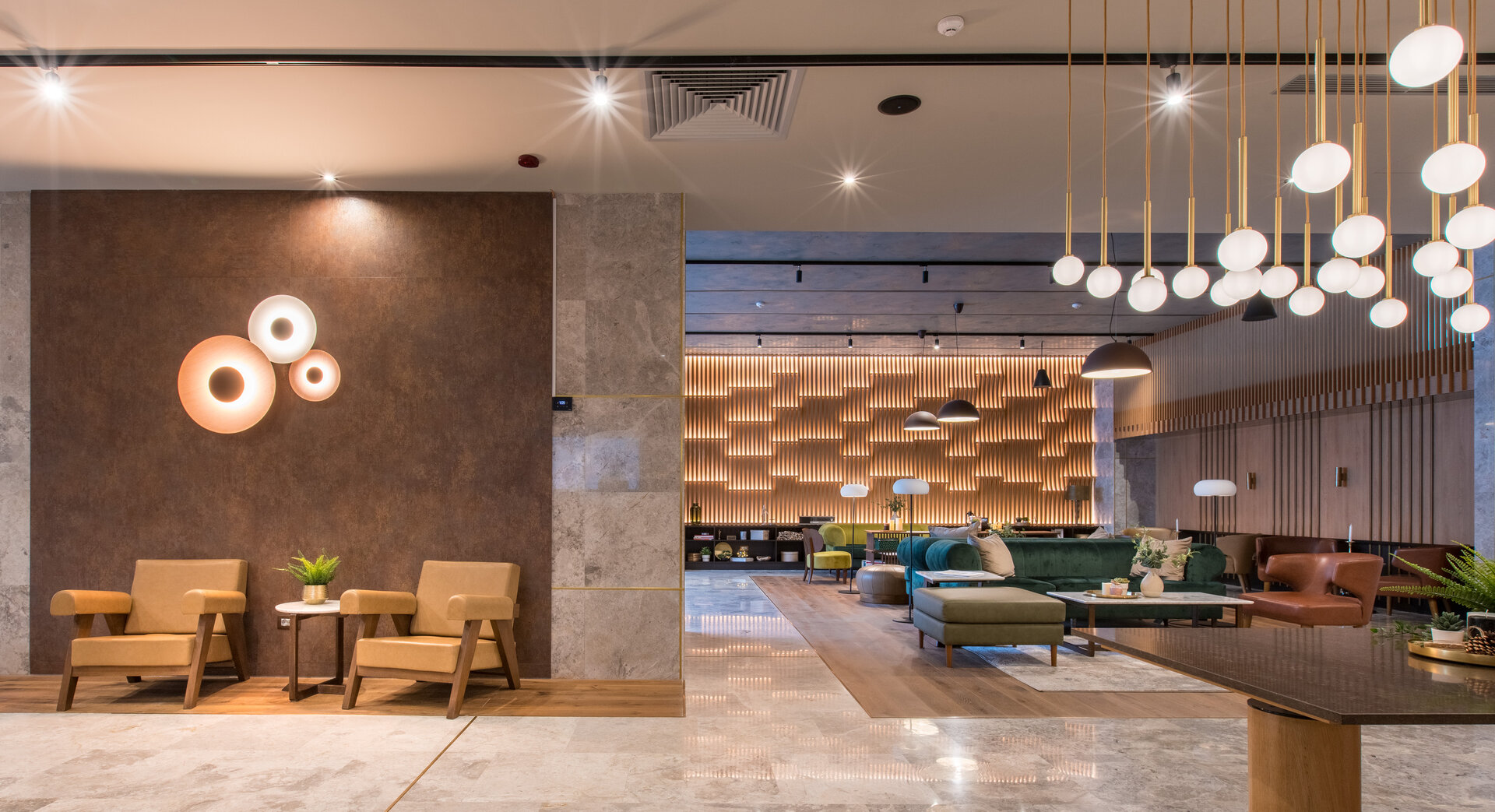 Interior Design Hotel Rina
The remodeling project of the Rina Hotel in Sinaia started in 2019, when we received the theme of making a proposal for the reception area, lobby, conference rooms and restaurant, with a total area of ​​2100 sqm. The building has a socialist architecture, being built in 1970, and is one of the largest mountain hotels in Romania, with over 240 rooms.

The spaces were designed in an eclectic style, probably somewhere around 1998-2000.

The brief was quite free from a stylistic point of view, so we proposed a design direction that combines a retro air with modern finishes. We wanted to have a warm and welcoming space, arranged in natural colors, with (obviously) mountain inspiration. We looked at a style that combines well-finished elements of a 4-star hotel with rigid natural elements (unfinished stone textures, broken wood textures).
The spaces are generous, to accommodate a large number of clients. In addition to the hotel reception and the lobby area (waiting), we proposed a series of new functions: we replaced the children's playground with a bar area that is in the immediate vicinity of the conference rooms. This Whiskey Bar becomes a buffer zone, serving both as an outlet for the lobby and as a relaxing space for customers attending conferences inside the hotel.

In order to align ourselves with a concept in the mountain area, we used wood cladding and elements made of solid wood. The floors are made of marble, as well as some cladding of structural elements. For floors we used 2 types of stereotomies: squares and hexagons, to emphasize various areas of circulation.

The lobby is dominated by a wavy wall, made of wood and LED lighting. I thought of this decoration element after studying the movement of coniferous forests in the wind. The anointing of the trees gave us the image we transposed into wood.
Another important area is represented by the 2 vertical libraries in the lobby. They are full of retro objects, many of them recovered from the former hotel layout, and serve as a link (memorabilia) to the building's past.

The whiskey bar area is dominated by a central fireplace. The front of the bar is covered with terracotta pieces made by hand at Medias, in one of the oldest terracotta factories in Romania.
The pieces are designed by us and made according to a custom design, and are inspired by the shingles of mountain huts. 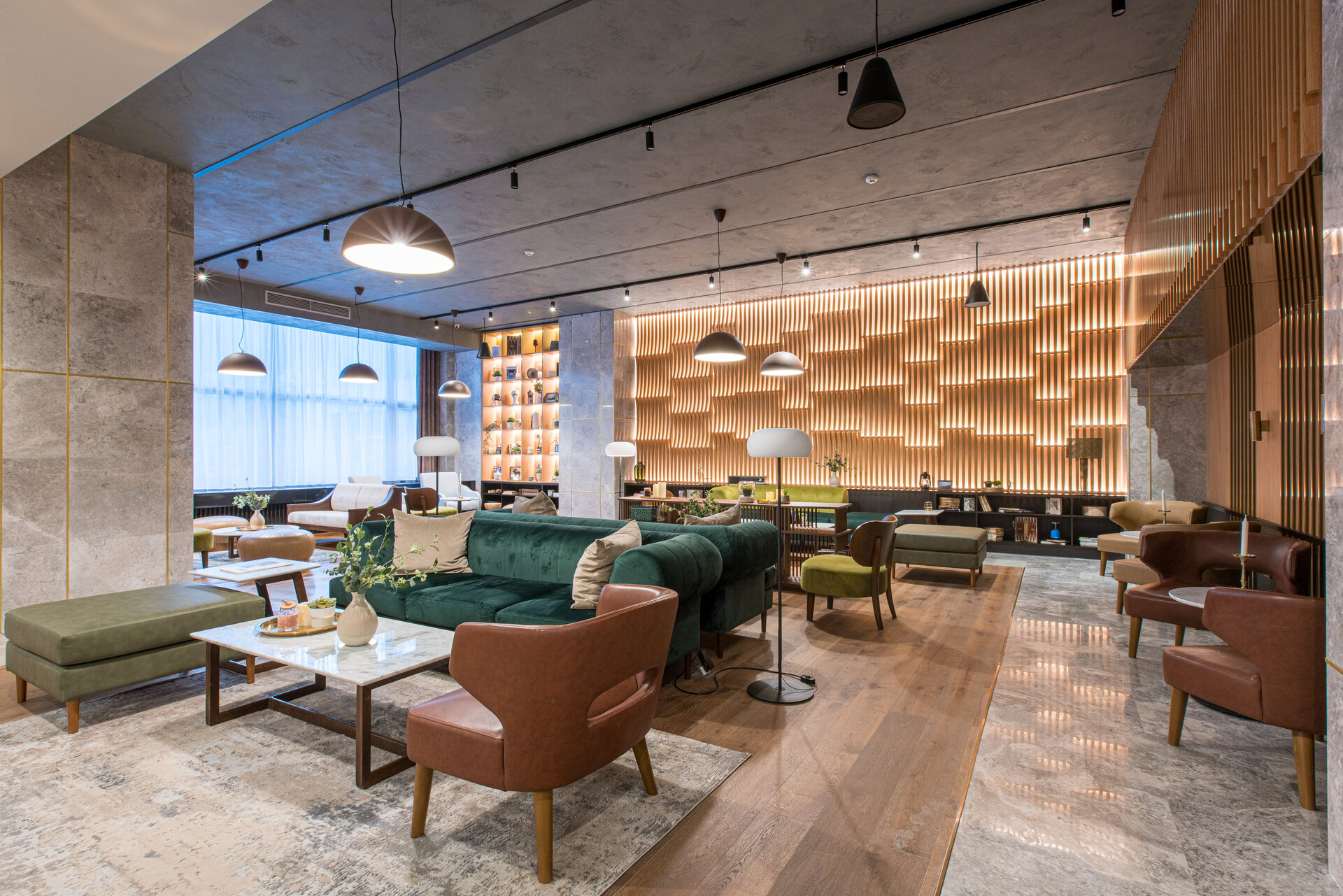 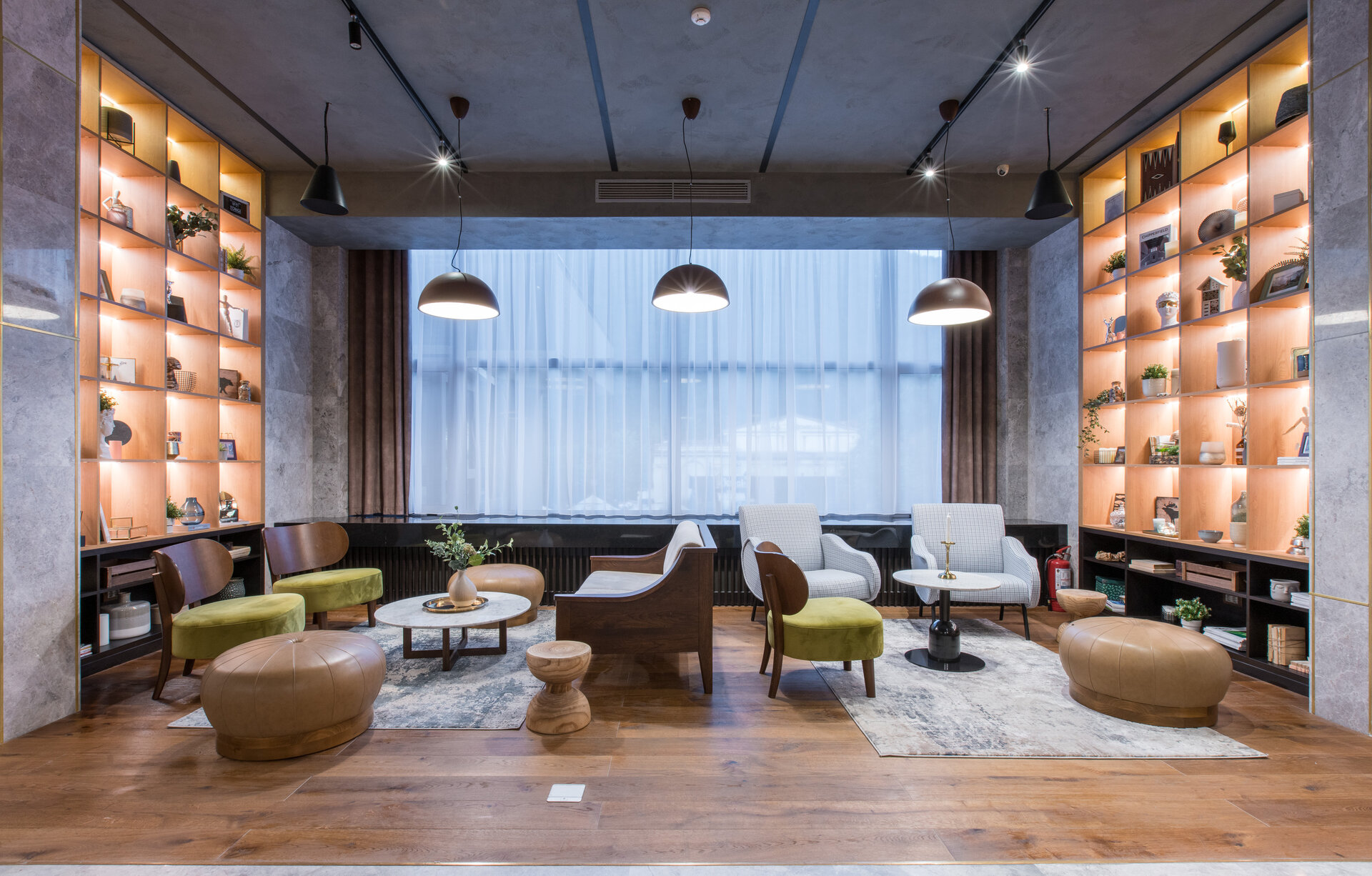 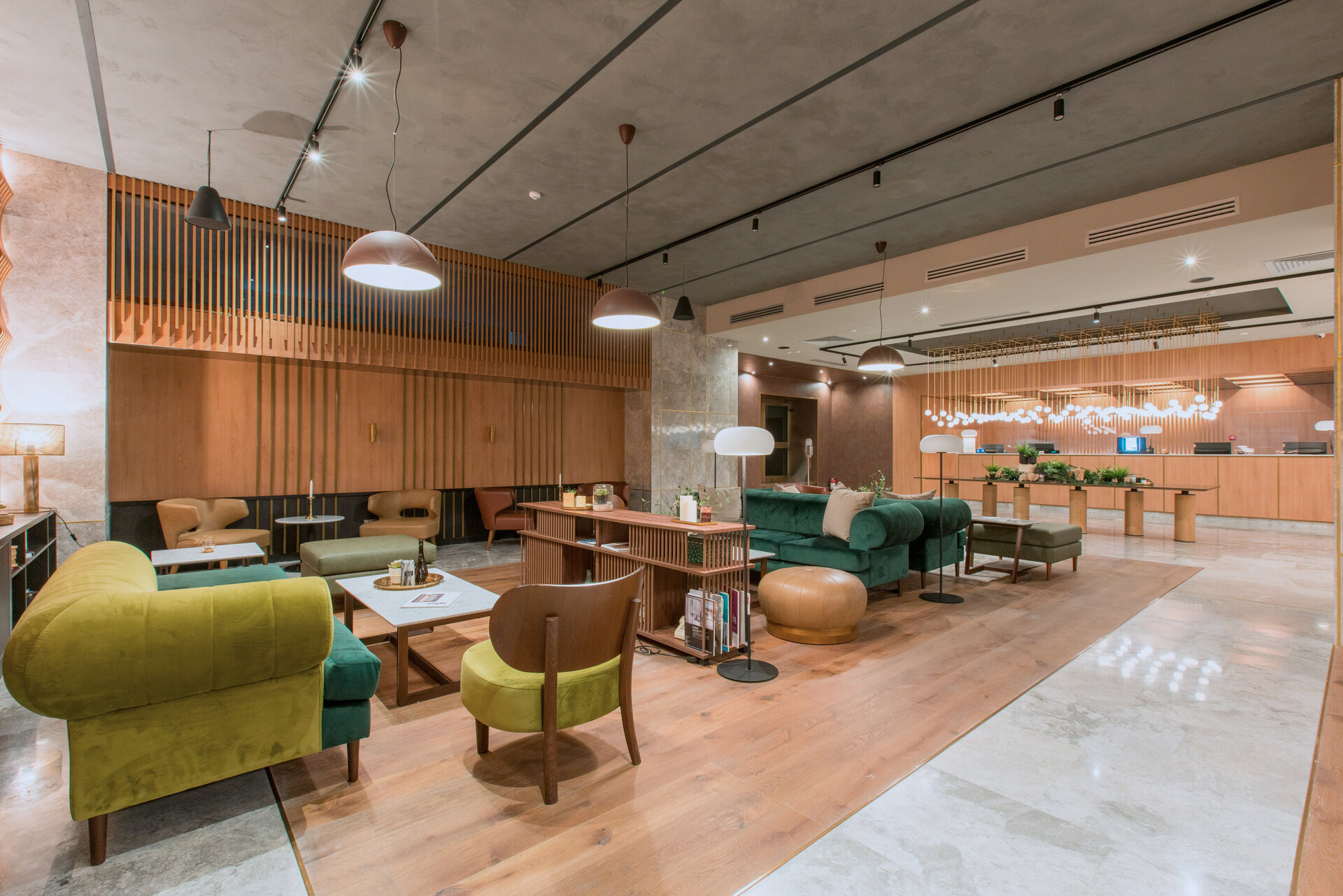 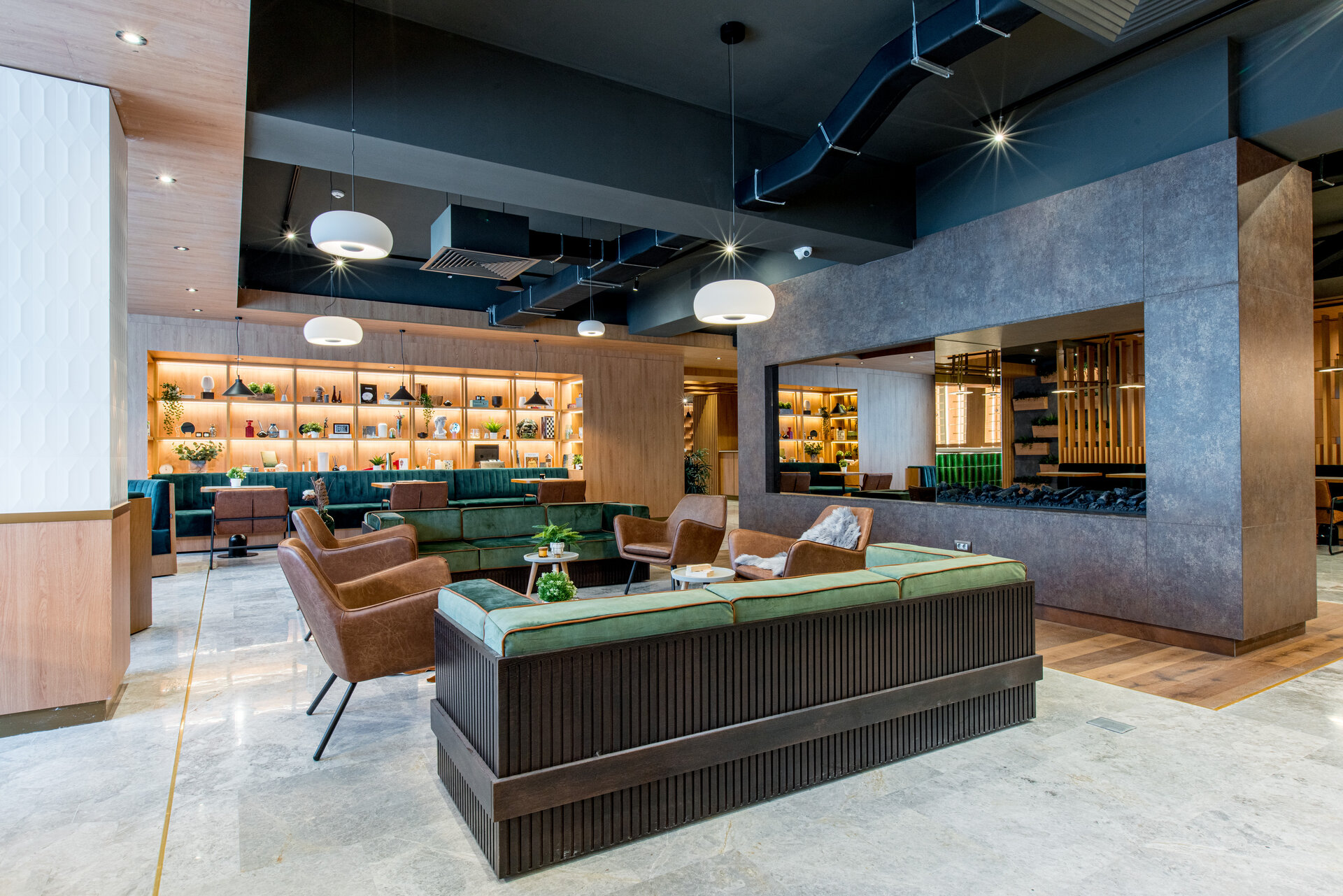 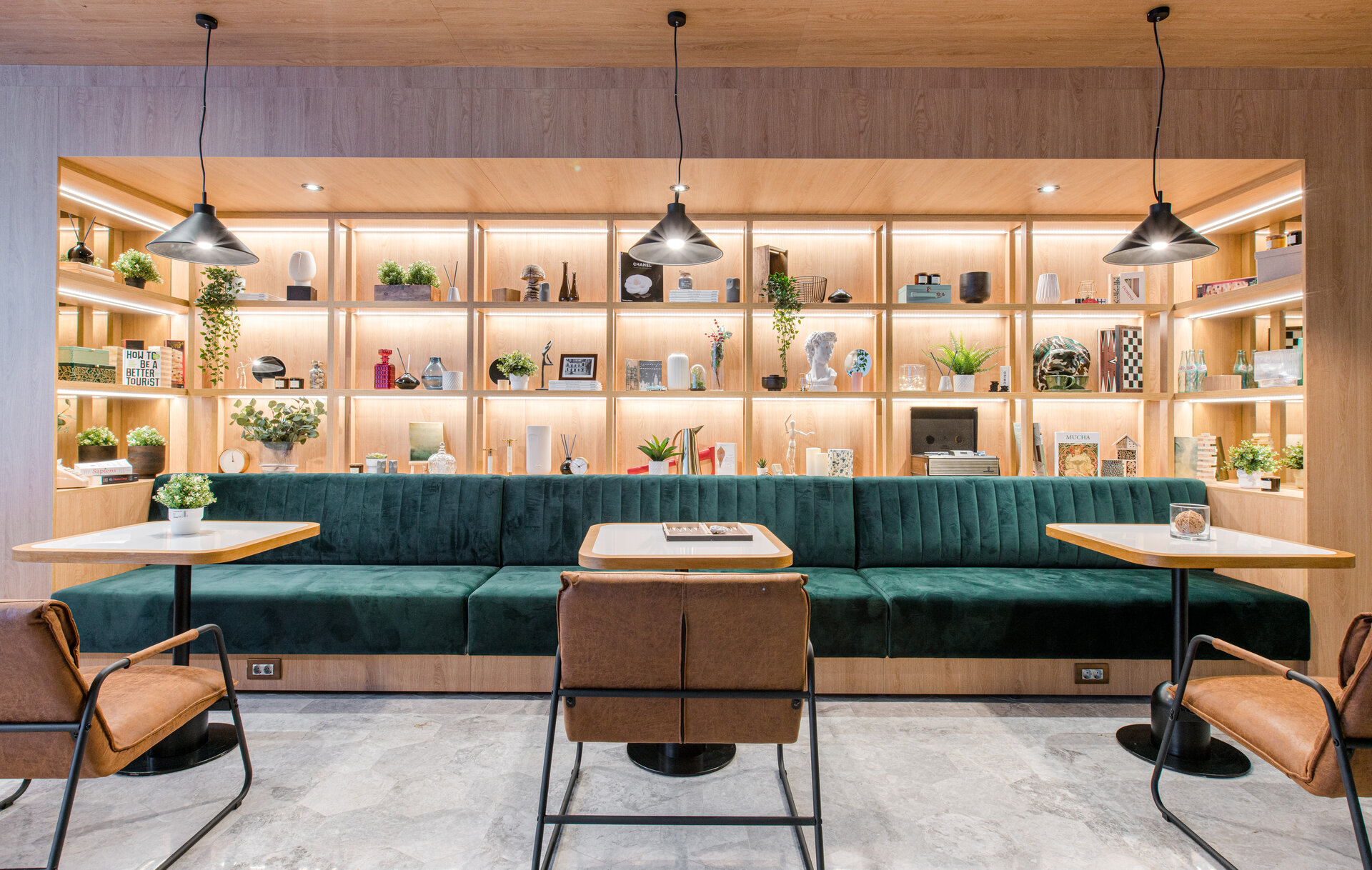 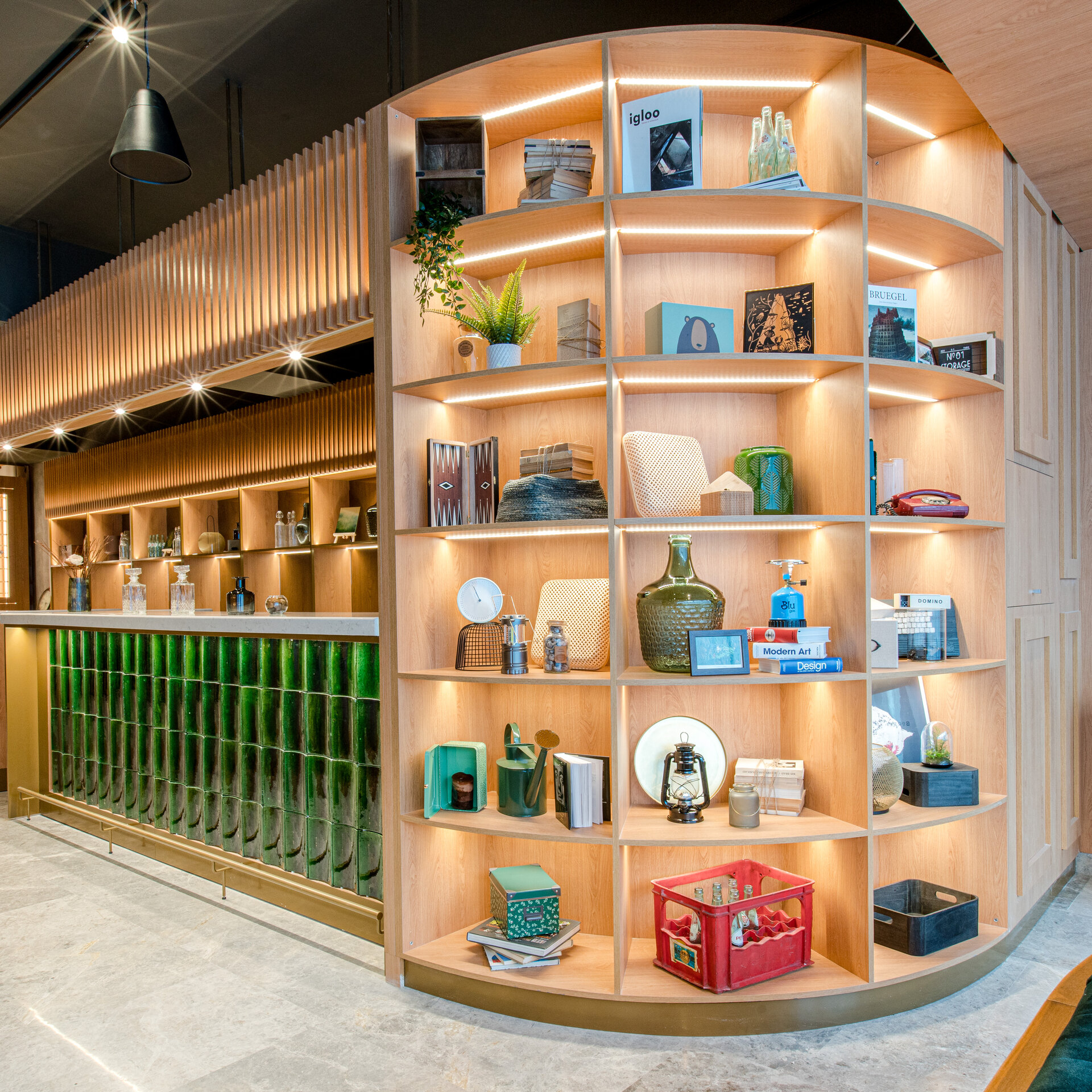 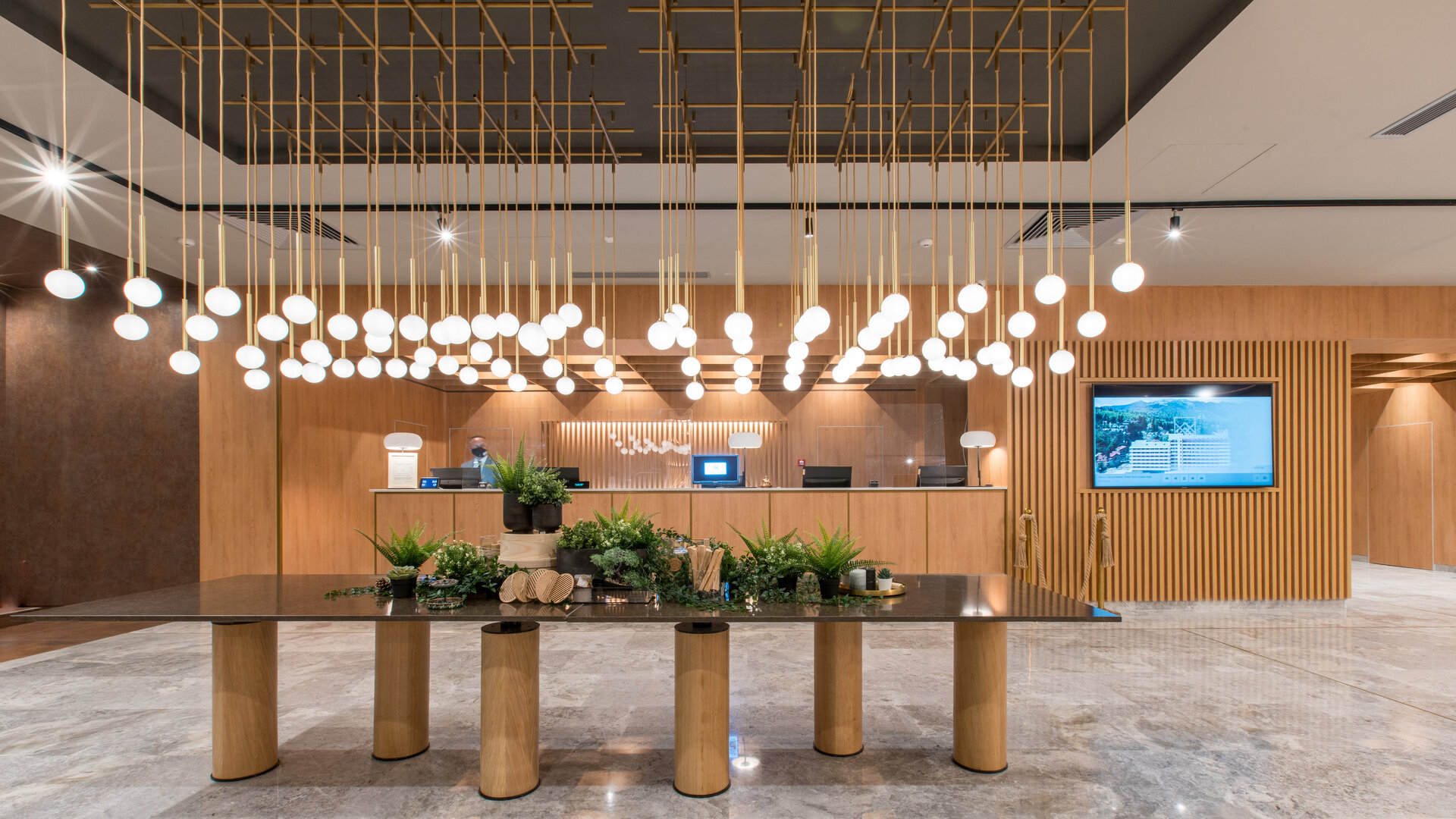 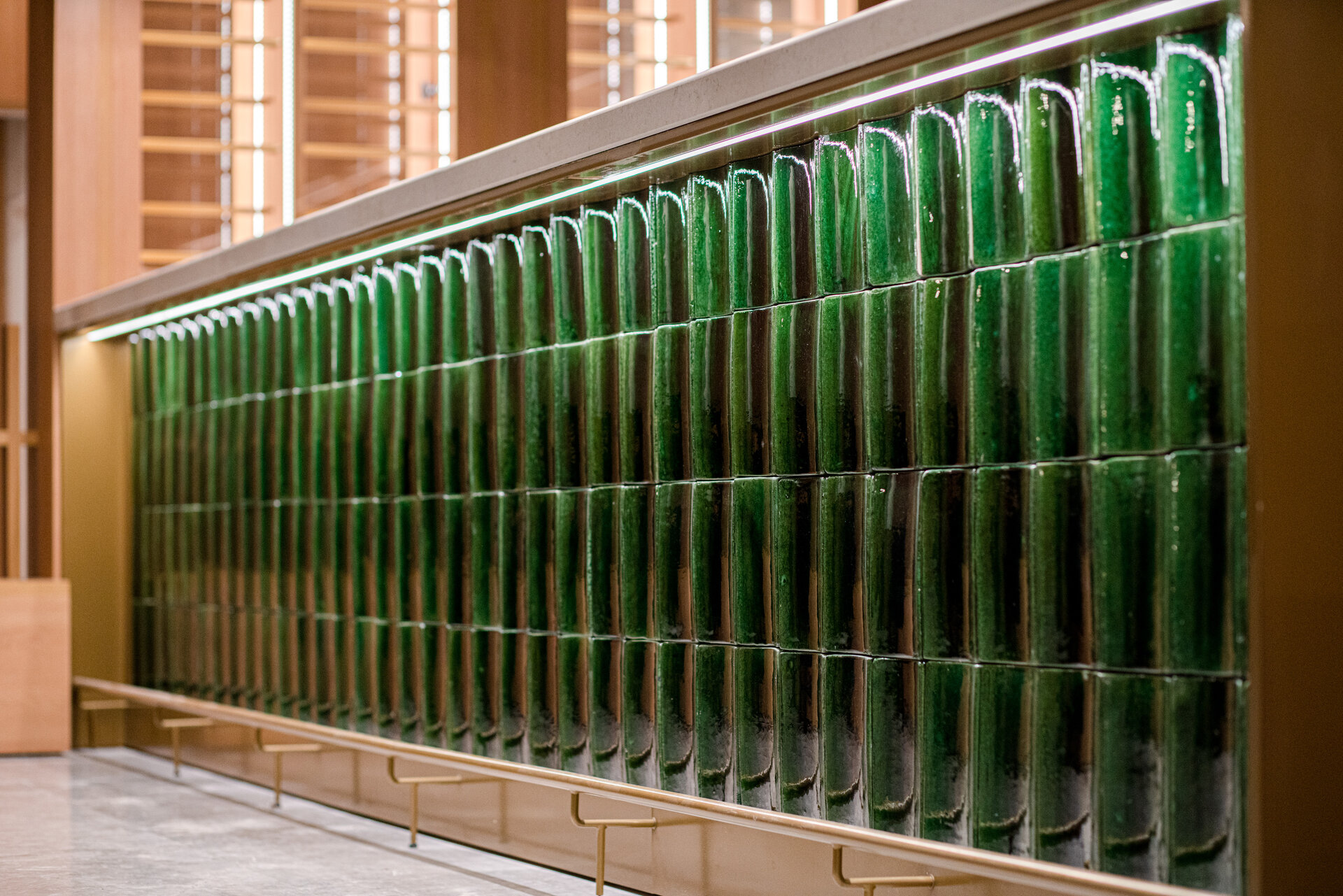 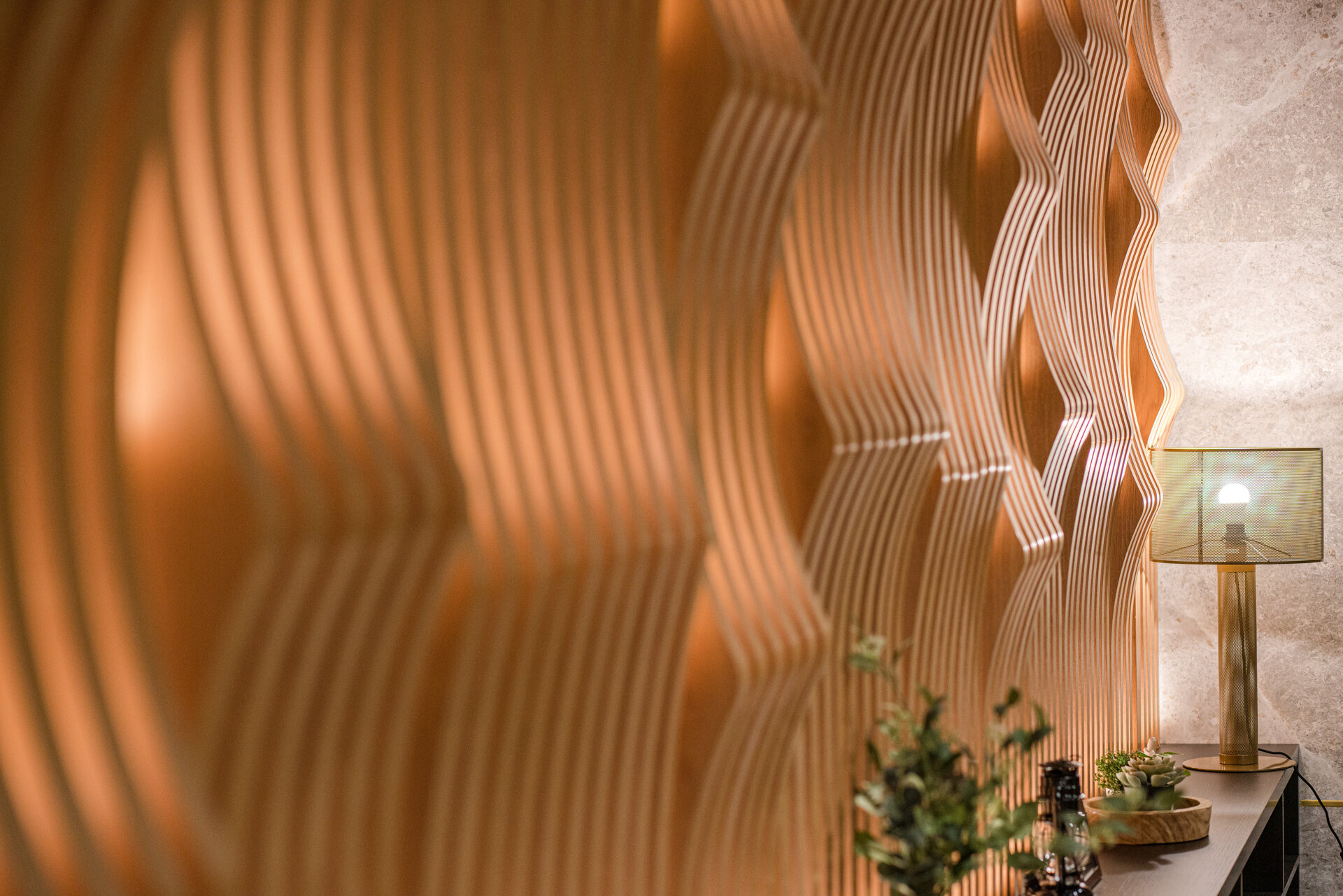 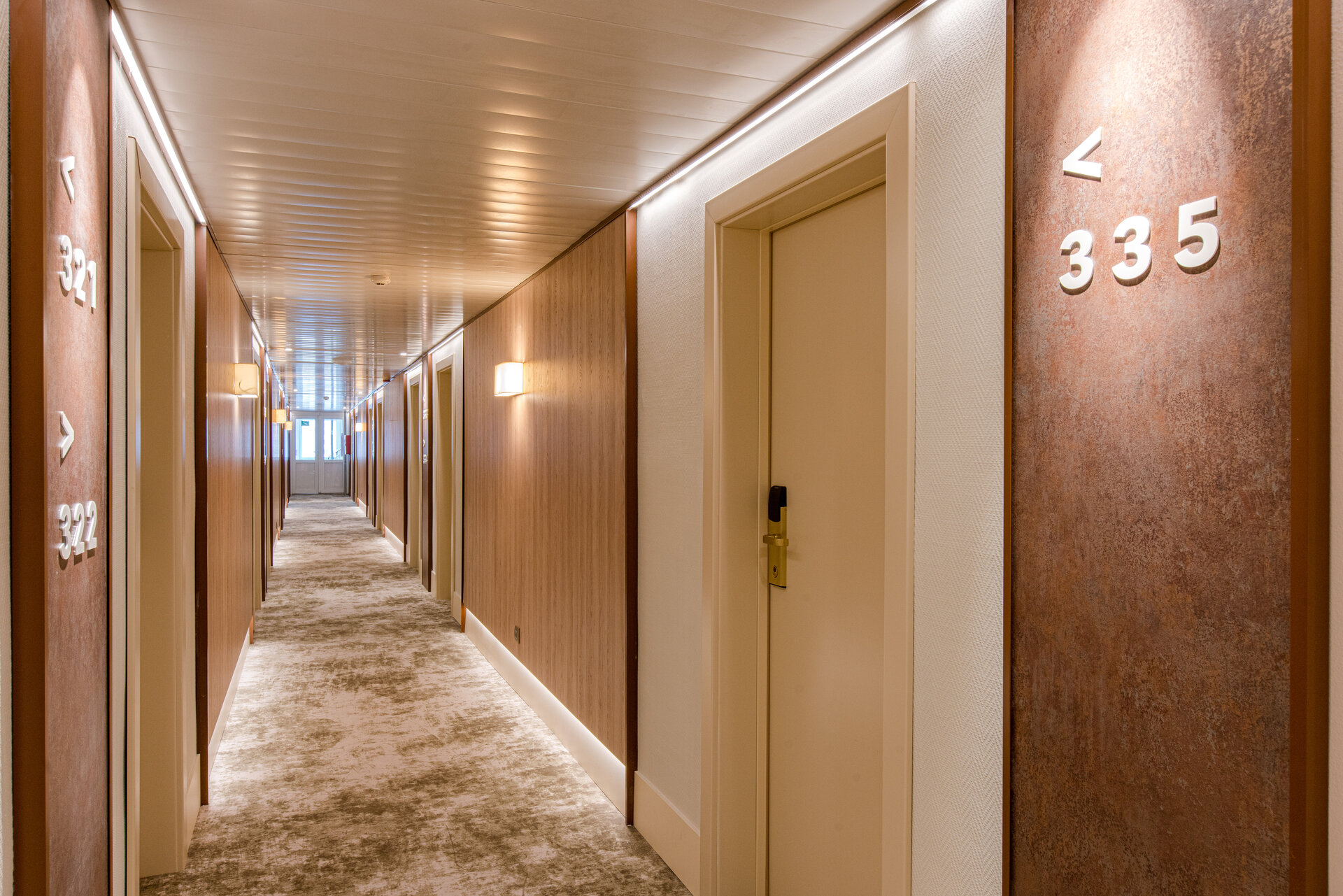