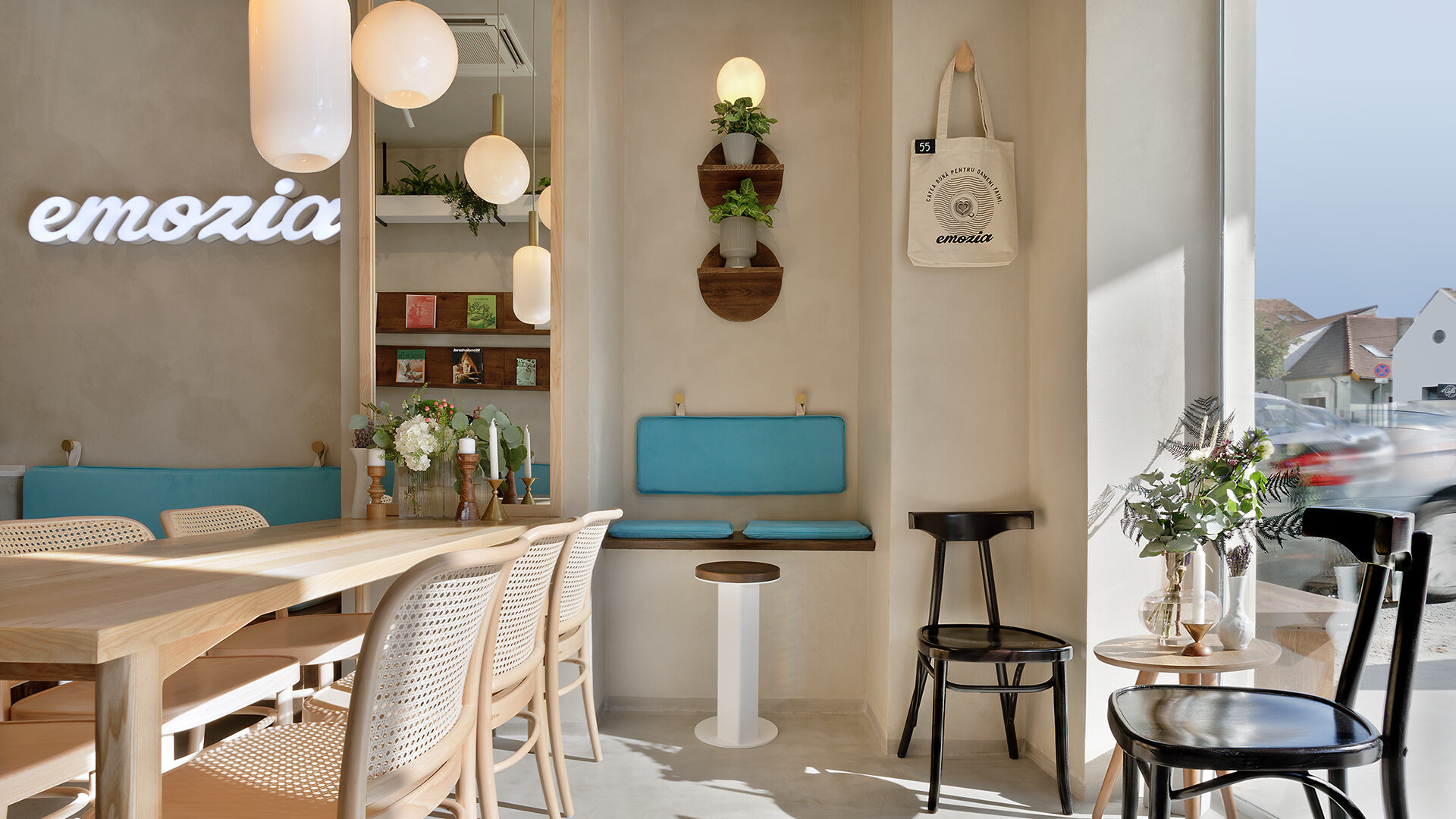 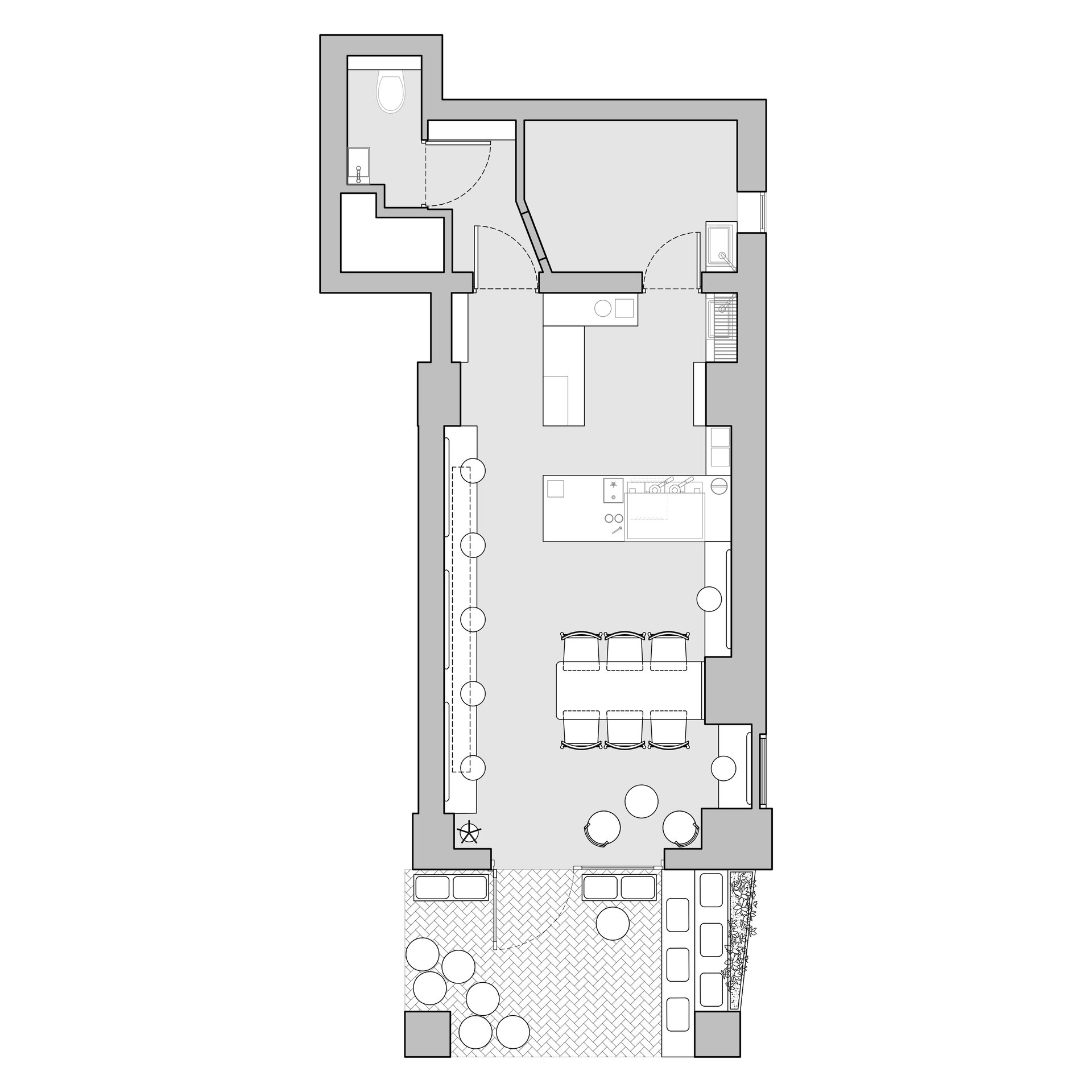 We believe a special cup of coffee deserves a place of emotion, and a place of emotion is a constant invitation for a special kind of people. This is what Emozia Cluj is all about. A conversation between a fine-looking space and a simple, clean and personal design.
Conceptually speaking, the space was intended as a meeting point, both relaxing and welcoming, that invites you to communicate. It’s that place where you don’t only go for the coffee, but also for the atmosphere.
Opening a coffee shop in Cluj, under the Emozia brand umbrella, came with many challenges. The space, localized in Cipariu Square, was a former restaurant and all the furniture was still in place when the project started. In order to build a whole new story for the place, it needed to be undressed of all its old layers gathered throughout the years and brought as close as possible to its initial stage. It was the only way for the new design to come to life.
The new coffee shop found its way in a world of contrasts – warm colours applied to the cement coating, the wood in two different types and colours. This is the reason why we chose a neutral type of finishing, both for the inside and the outside of the space. In this way, people coming in would be allowed to discover on their own the game of contrasts, thus interacting with the space itself, for a multisensorial experience.
The elements that are also present in the coffee shop from Bucharest are now combining themselves in a new scenery, just like reordered Lego pieces. The minimalist style of the design, with its straight lines present all throughout the setup, pleasantly combines with the rounded light units and the rounded arcades of the doors.
Even more, the emphasis of the bar is made possible through a light unit that becomes the lead character of the story, bringing the space a playful touch. The long walnut bench, situated on the long side of the space, guides the viewer towards the bar, which is framed by the two arcade doors, symmetrically positioned in the point of extreme perspective.
Most of the furniture was custom made, the walnut bench, the little metal tables, together with the “friendship” table, perfectly complimented by the Ton chairs. The central table continues on the wall with an arcade mirror, almost two metres long, that highlights the height of the space but also the role that windows play for the coffee lover.
On the same note, the placing of the small, table for two at the window display builds up an area where intimacy and openness are both present. The possibility of a tête-à-tête discussion is offered in such a welcoming manner, that one only needs to come inside and sit down.
The shelves filled with magazines have become a recognisable brand mark. In this case they were especially elongated, so that their place above the bench would work as an invitation cue to linger a bit more in the company of words.
In the end, we wanted to outline through our design a space that will allow all future clients to come in and relax together while enjoying a one-f-a-kind cup of coffee. The name of the coffee shop itself, “Emozia – fain si simplu”, evokes the exact feeling we wanted the space to project on the visitors. A well thought and fine-looking place where a good cup of coffee makes everything seem easier. 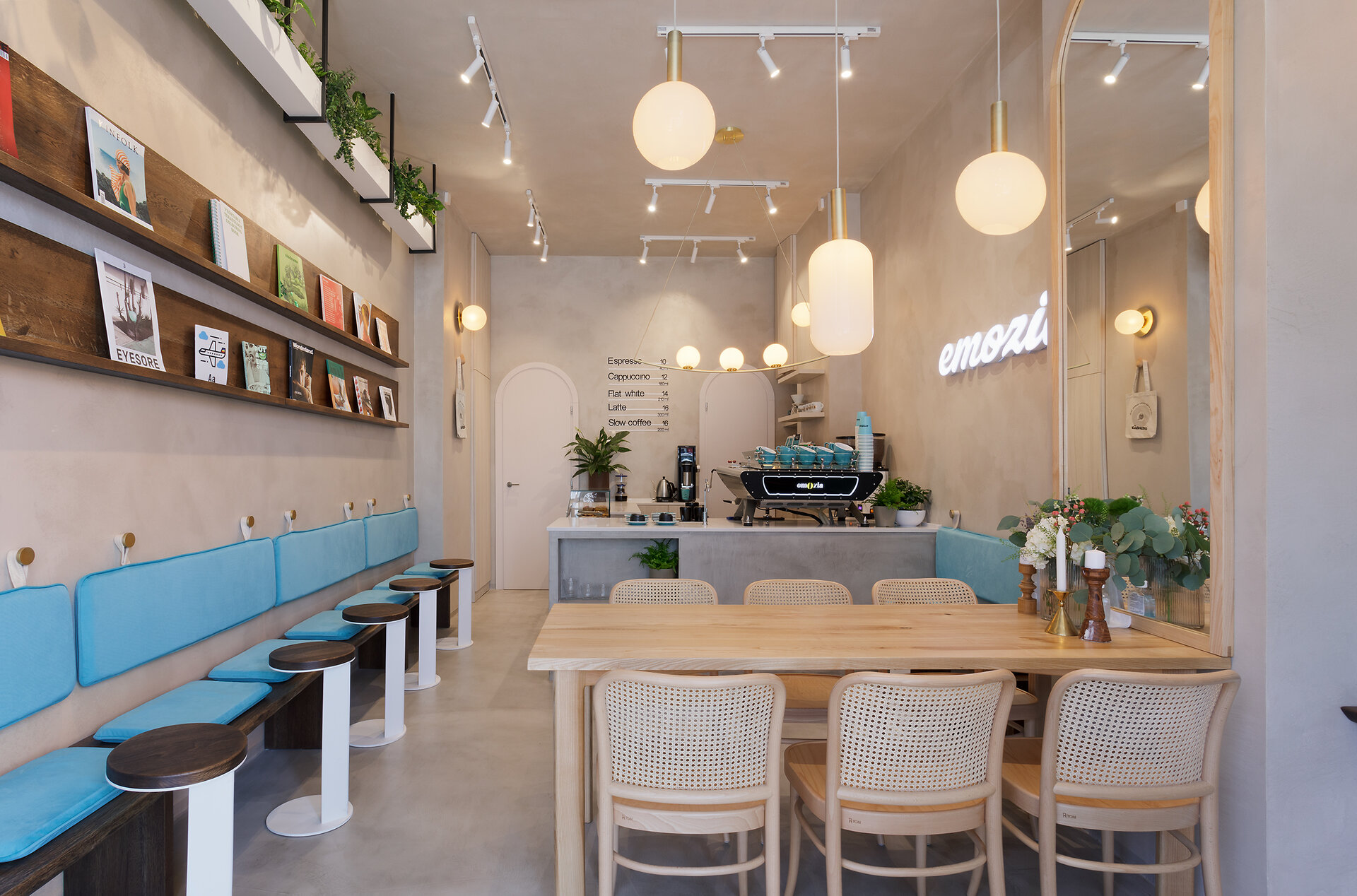 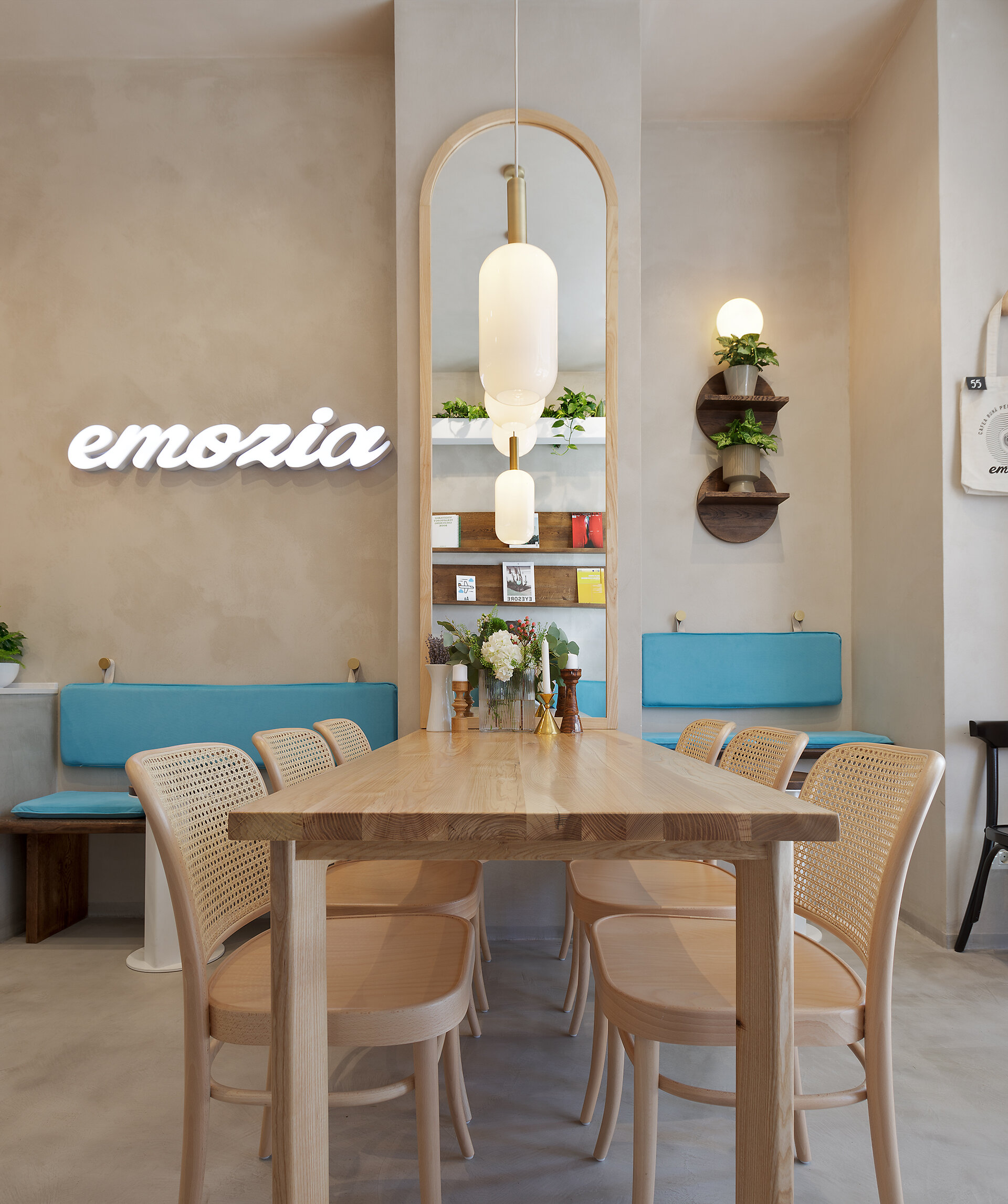 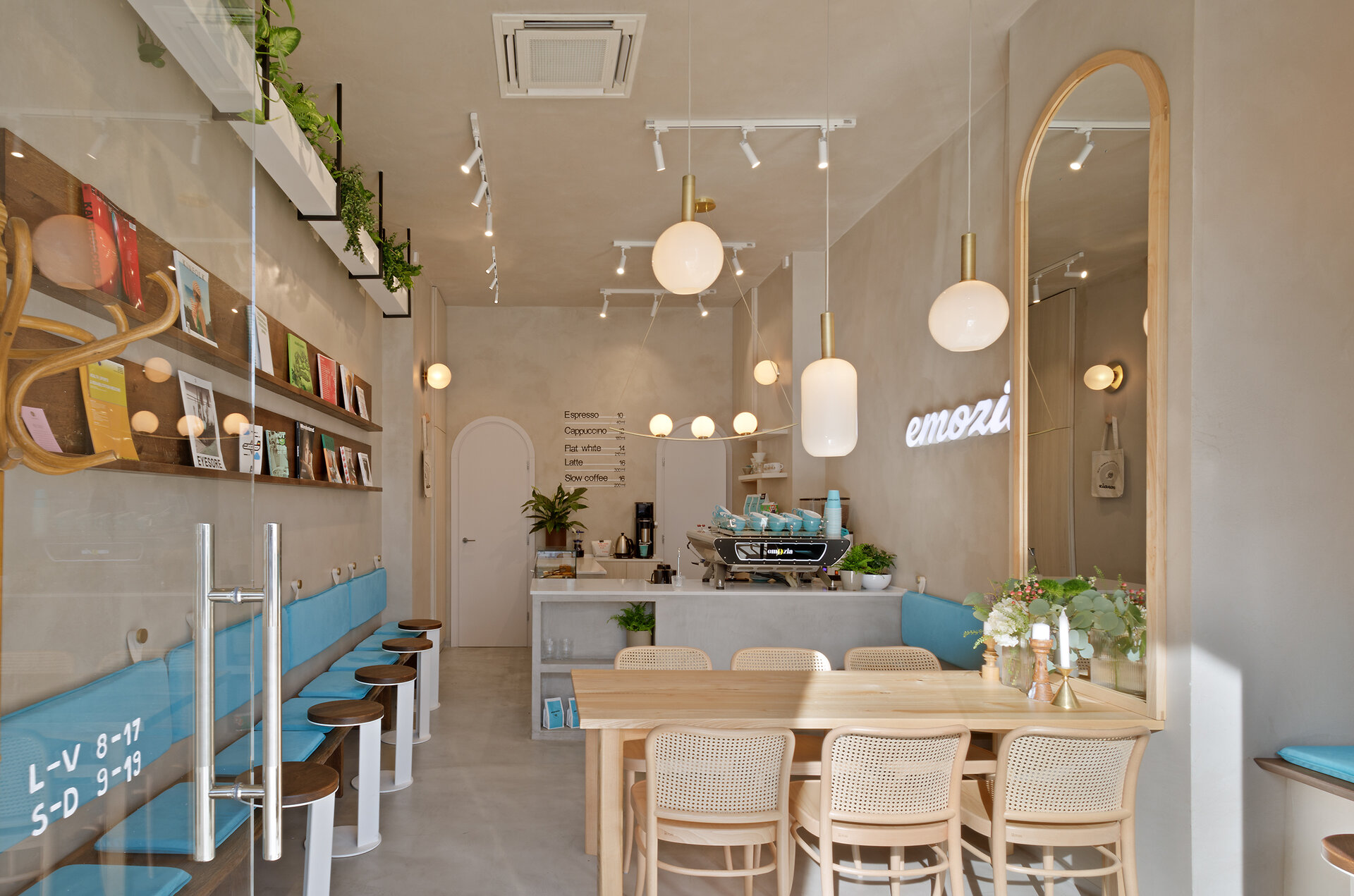 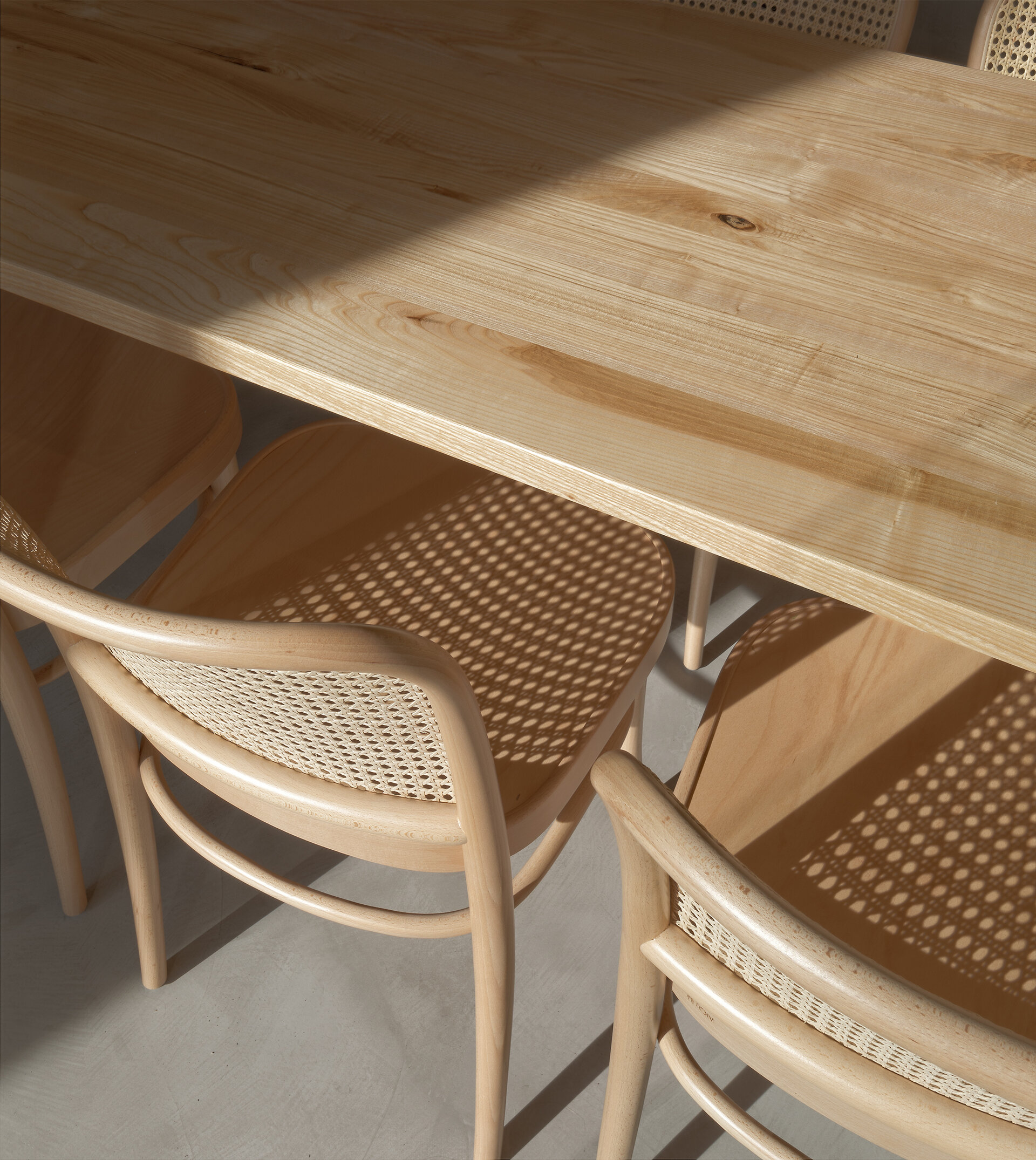 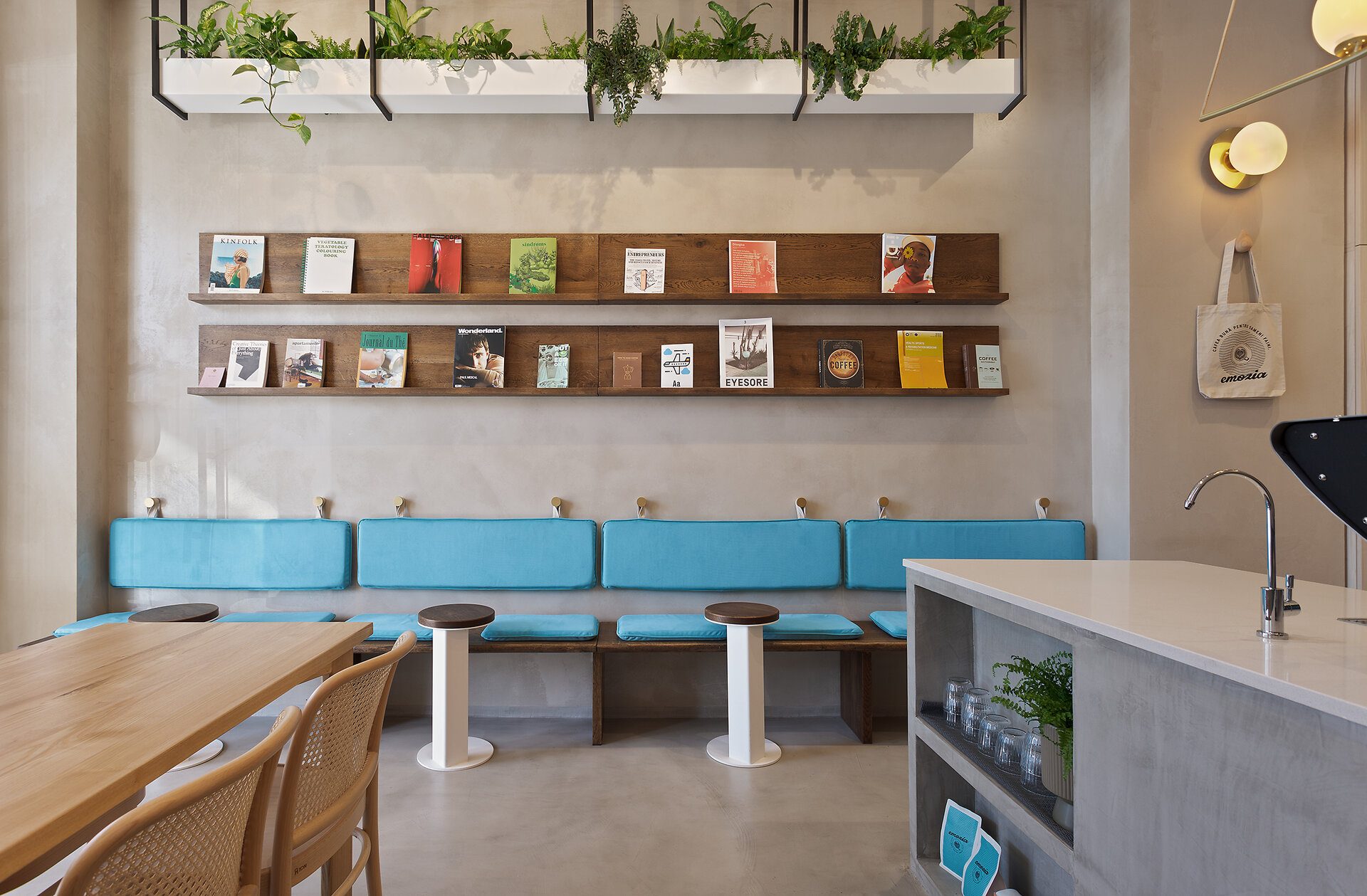 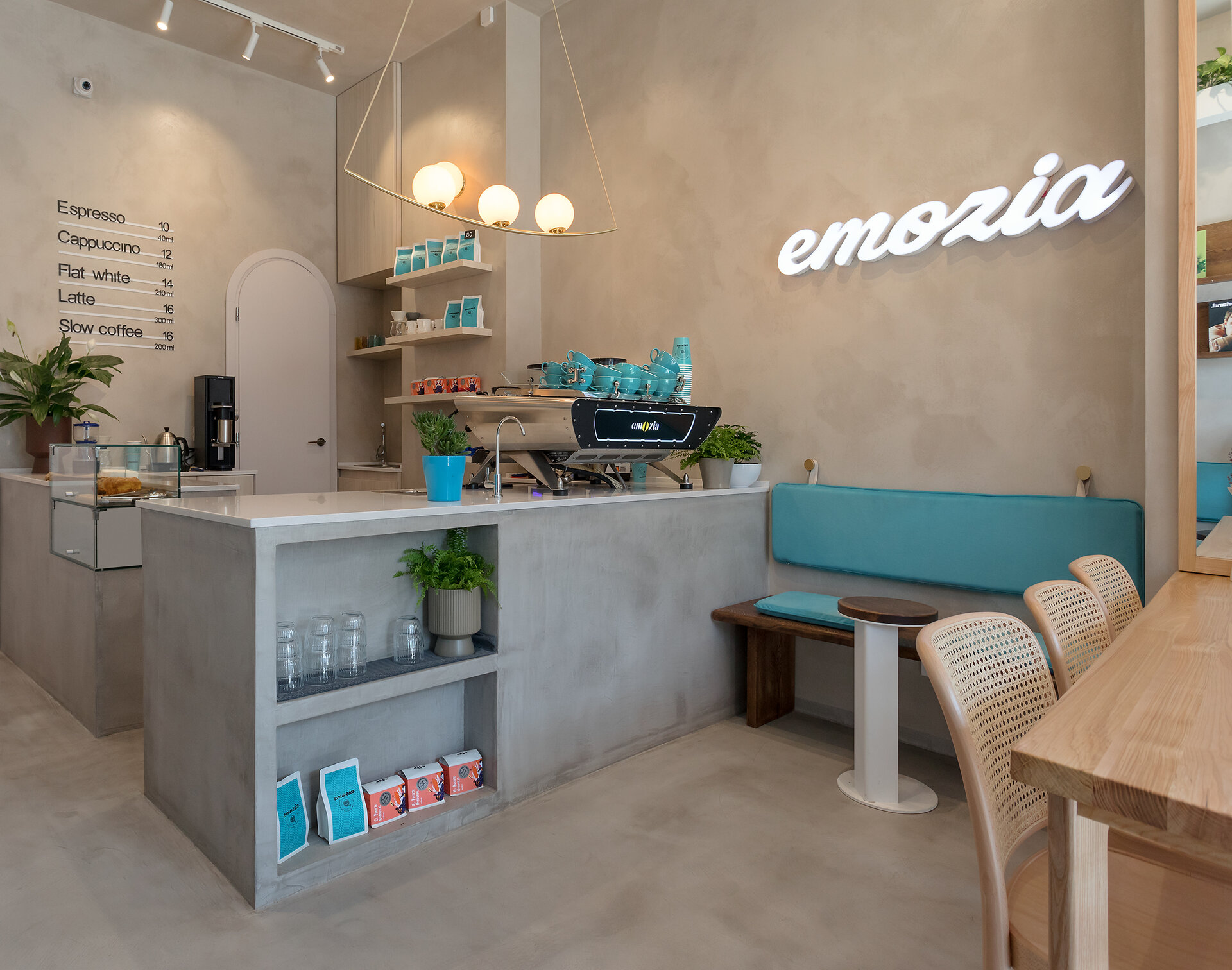 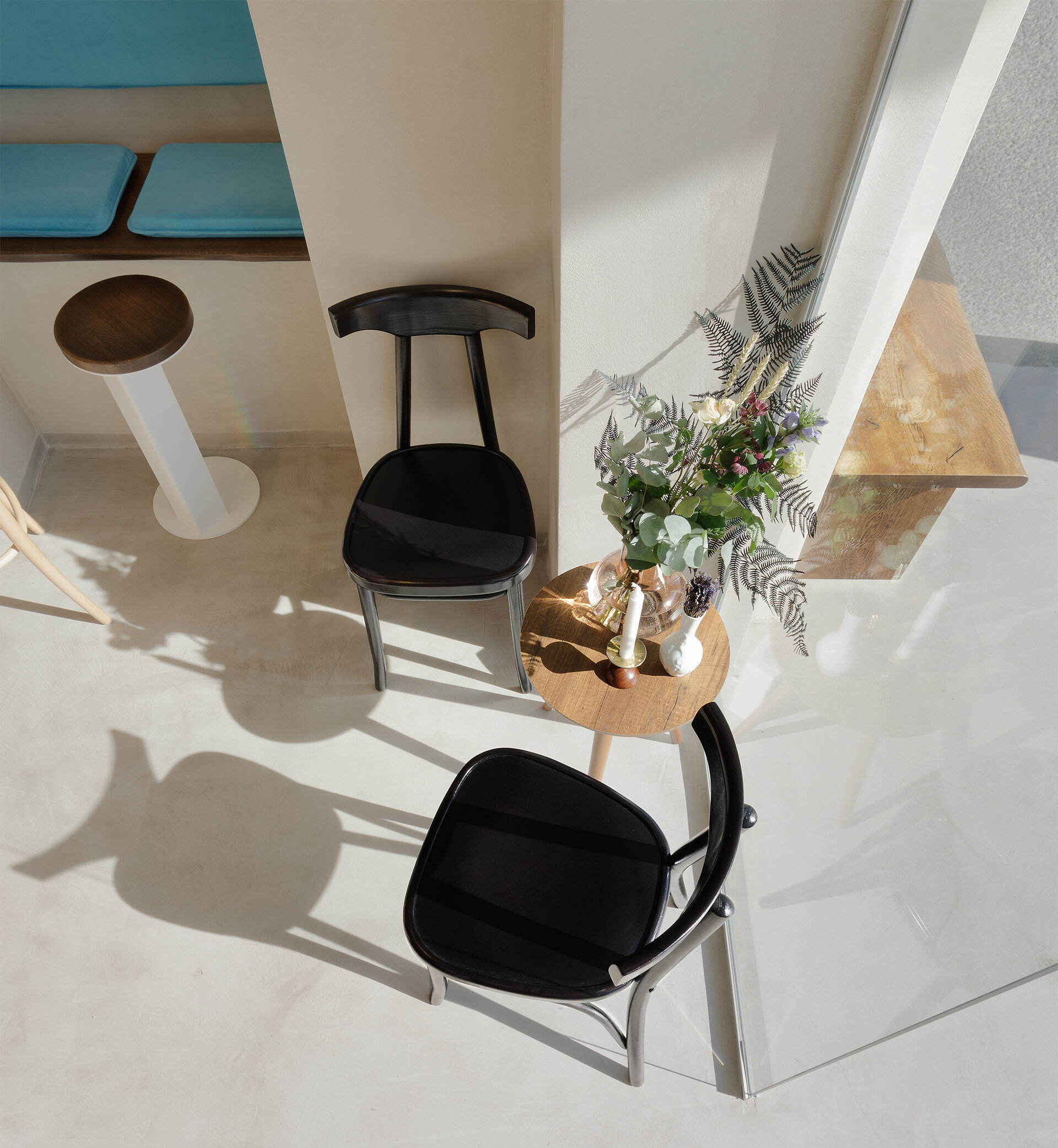 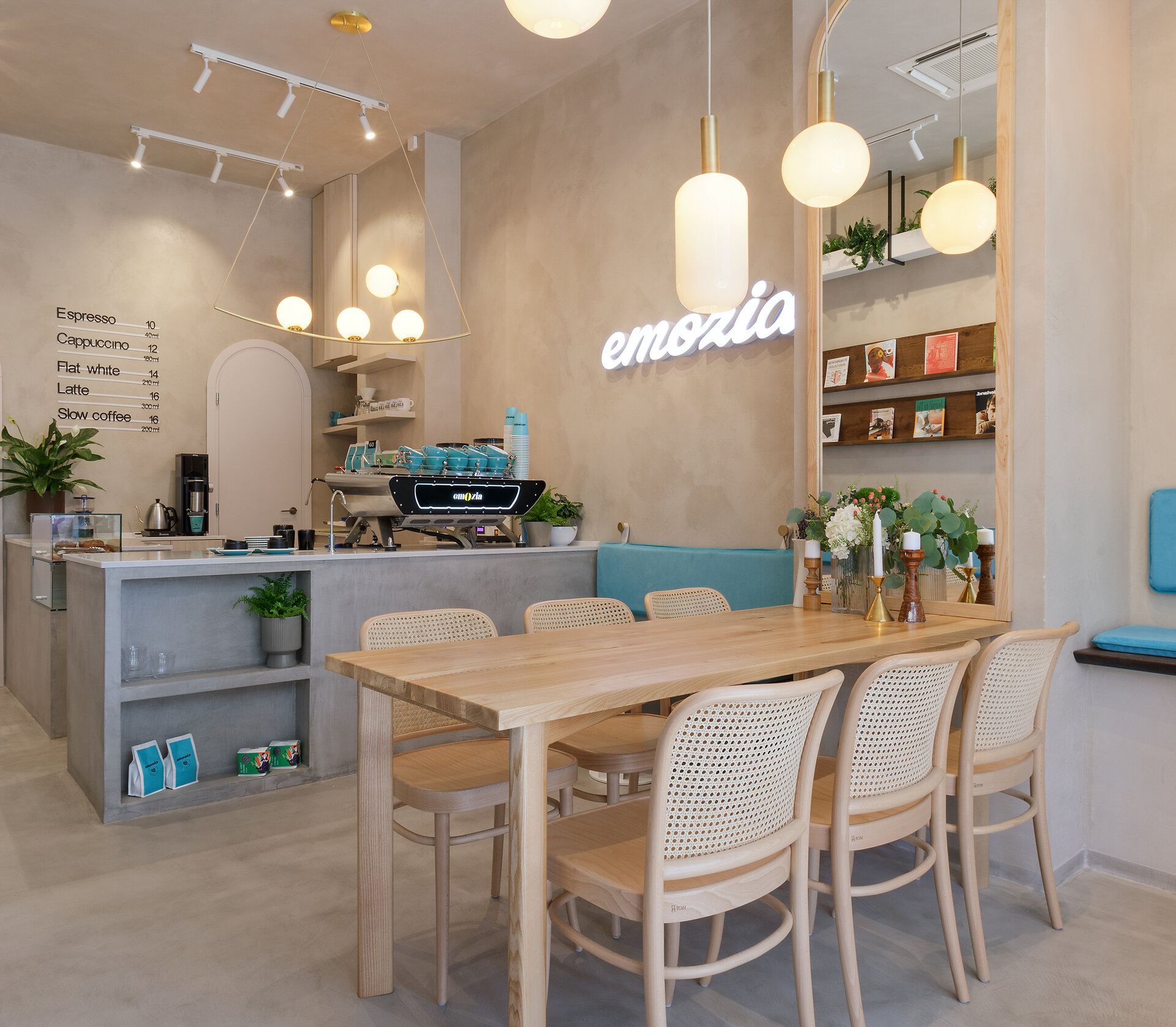 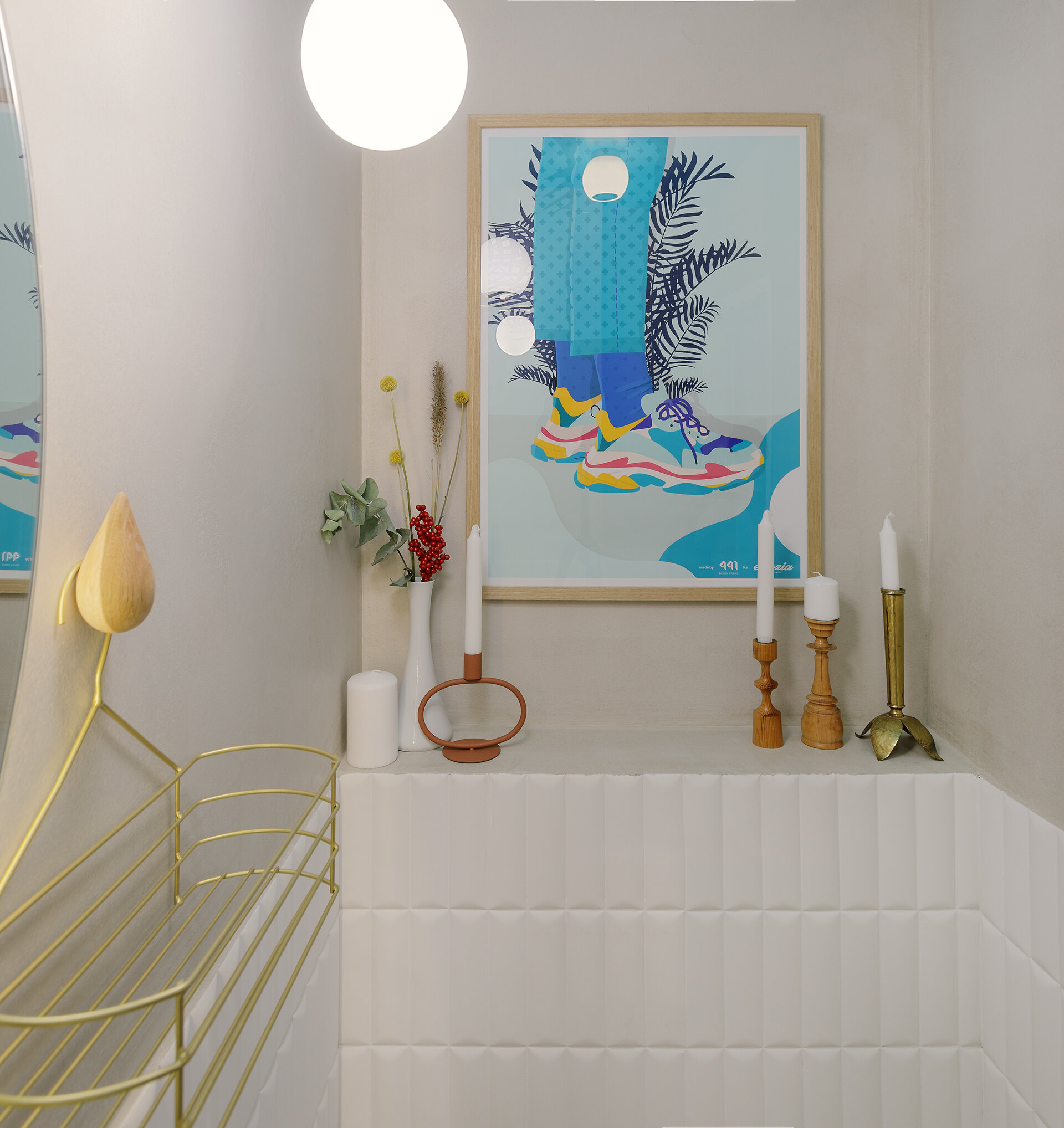