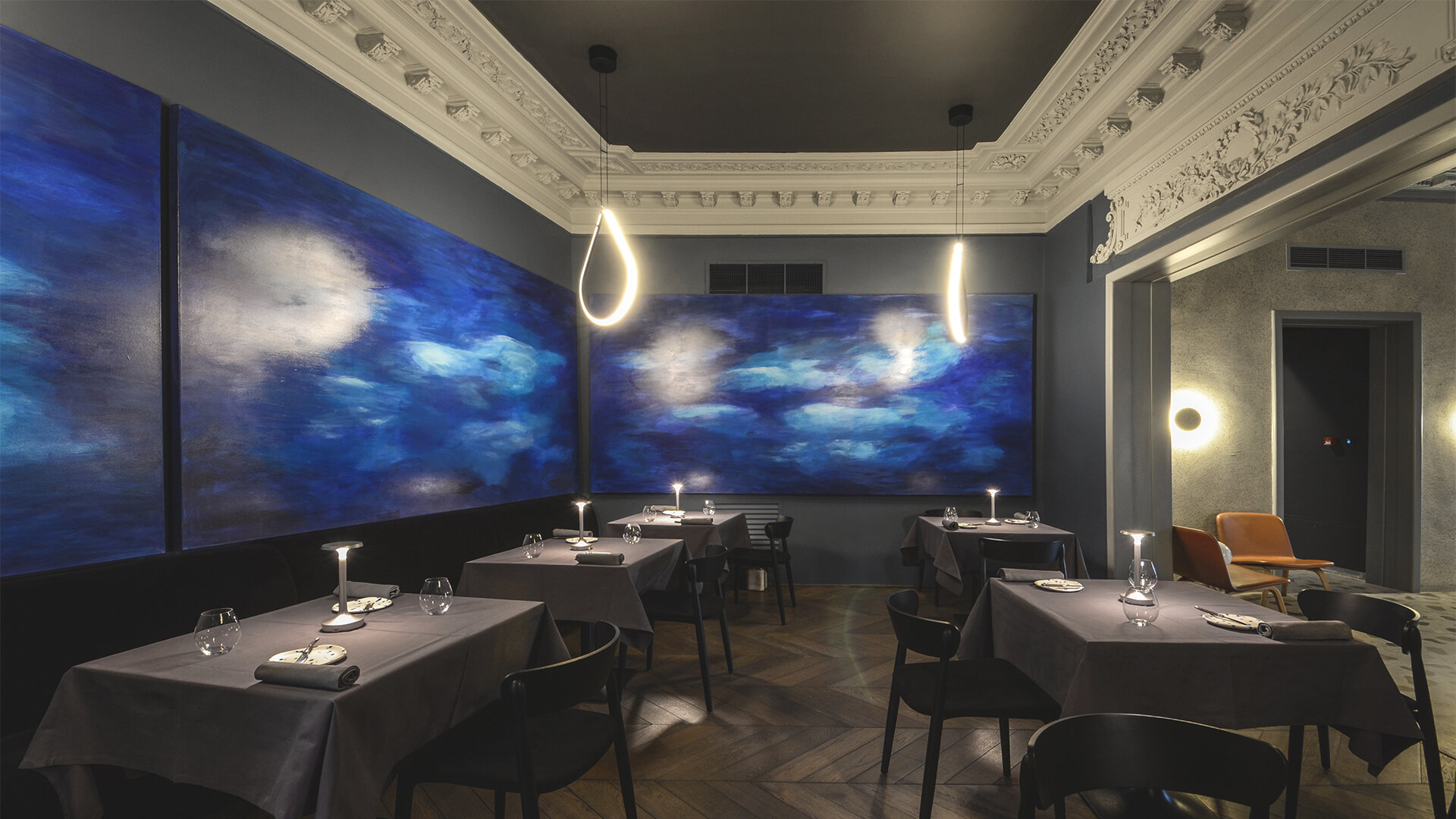 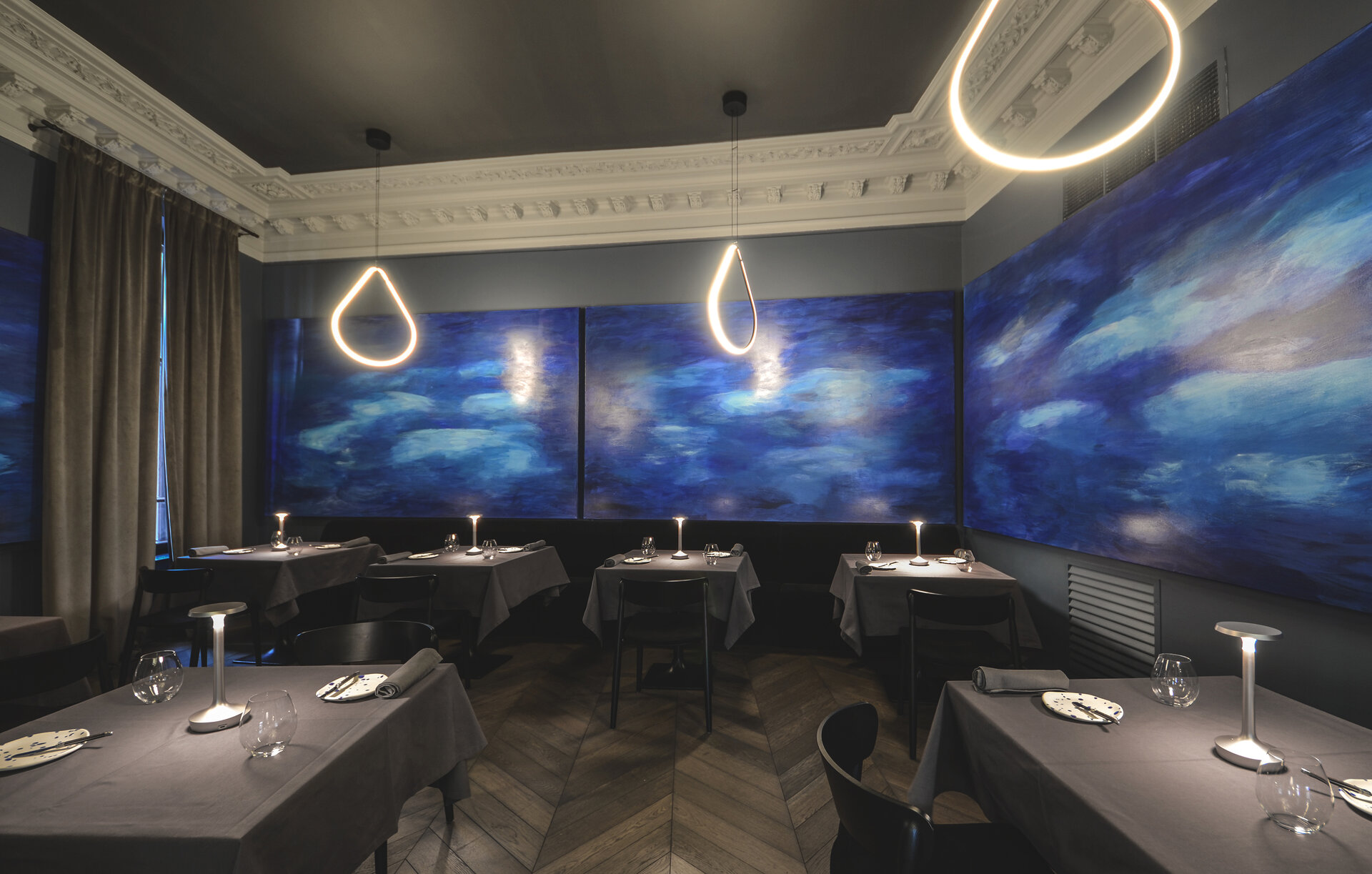 A restaurant reinvents itself as a space of experiments and culinary experiences. A particular approach of the romanian taste means an adequate approach of interior design. The initial requirements were outlined based on the insertion of the fine dining concept into a remarkable house, built at the beginning of the 20th century, in Bucharest’s city centre.
The house that would soon become the background for an authentic culinary experience is located at no. 9 on Dianei street and was listed as a historical monument a few years back. Built after the design of architect Ernest Doneaud, but having been neglected for the last decade, the building has progressively degraded. A series of important elements, especially from the interior, have been destroyed or gone missing, such as the windows woodworking or plaster decorations; ceilings, walls and floors were already in an advanced degrading state.
Whilst the chefs’ job was to give the traditional romanian cuisine a contemporaneous touch, the architects’ job was to transform an interior typical for early 20th century – from which only the bare walls and a lot of debris were left – into a contemporary and authentic one, where not only the food itself is an experience, but also the atmosphere around it. Thus developed the mutual approach in outlining the design; the communication between the client, architect and the chef led to the following solution: traditional ingredients in the kitchen, traditional materials and techniques in the interior design, all reinterpreted in a contemporary key. And one more thing: craftsmanship.
The designing started by identifying elements from the house’s original architectural lexicon, the homologous for the local ingredients in the kitchen: the French door was remade after the drawings of the original one – that had meanwhile disappeared, and the plasterwork has been restored. The interior layout was left unchanged, so the entrance lobby – sizewise suited for a certain type of guests reception – remained an important part in spatial perception. For better defining its role, the ceiling was replaced with a reinterpreted stained-glass.
The study then focused on materials, colour scheme and traditional techniques that could be inserted into a contemporary manner. All these led to some of the design’s most characteristic features: the wall covered in black Marginea clay tiles, the river-stone terrazzo made with traditional techniques using stones from Arges river, the burnt wood wall panelling, the stone-dust based plaster and a series of deep-blue painted canvases by Cornelia Moldoveanu. A few paintings by Irina Neacșu – botanical artist – minutely illustrates romanian plants used in the restaurant’s dishes. But the craftsmanship-based design does not neglect technology. All the equipment is automated and connected to smart control panels.
Every room tells a story in which the food is perfectly incorporated. Everything orbits around the open-kitchen, a culinary laboratory that is visually accessible for guests towards the lobby and also through the chef’s table, a private area from where you can watch the cooking process step by step. The design becomes thus an instrument of the new culinary experience as an inherent part of Kané identity. 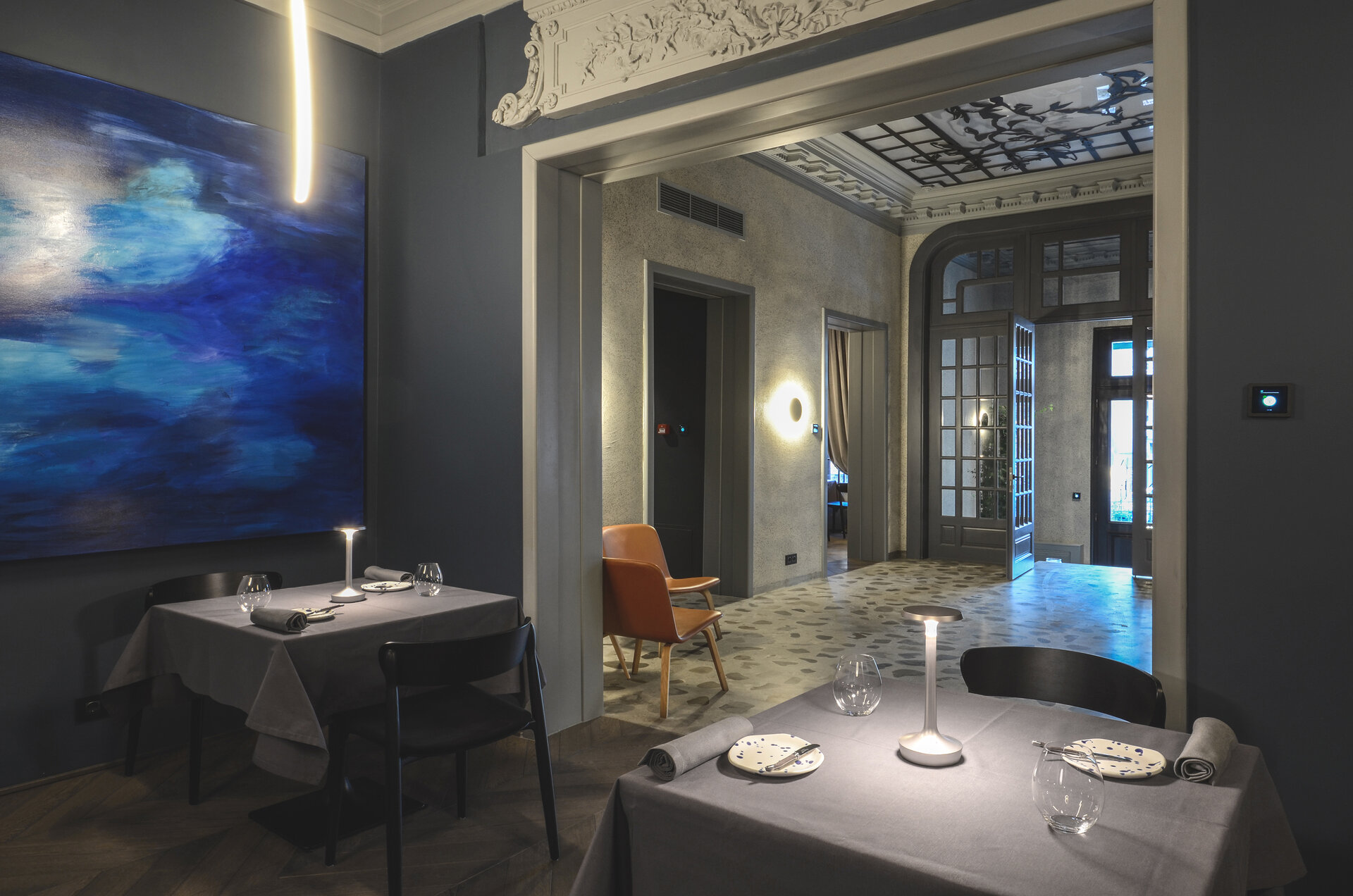 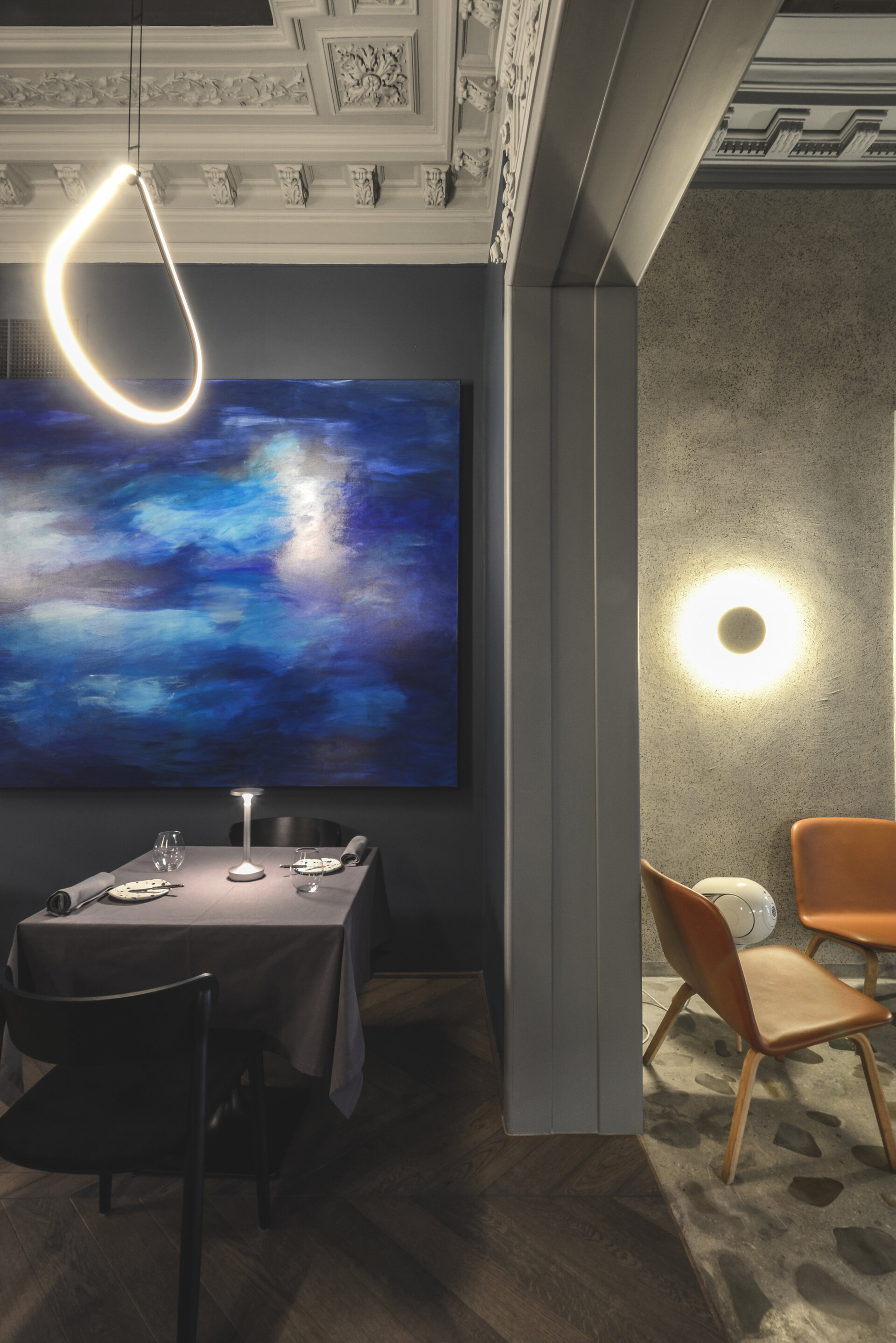 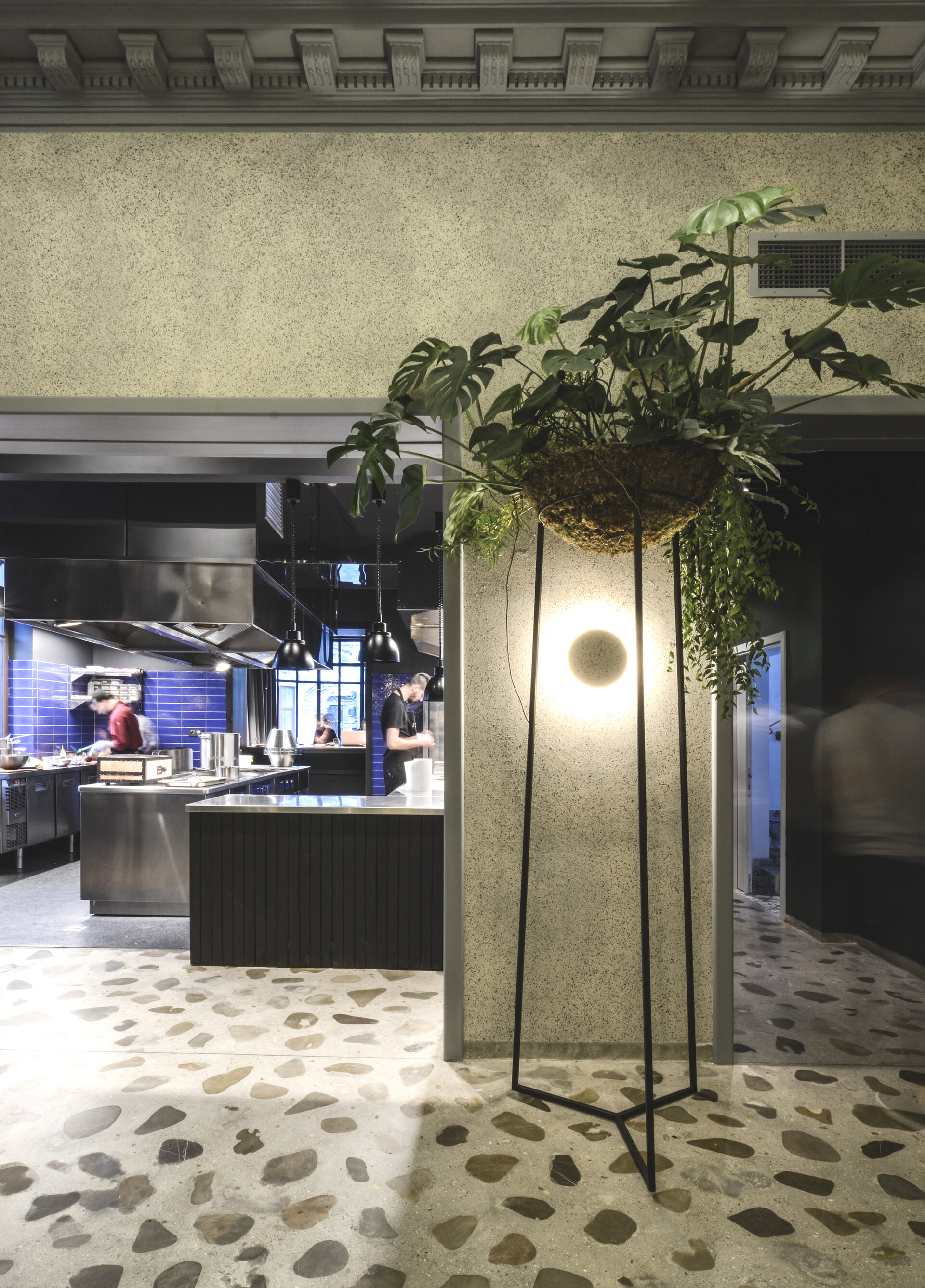 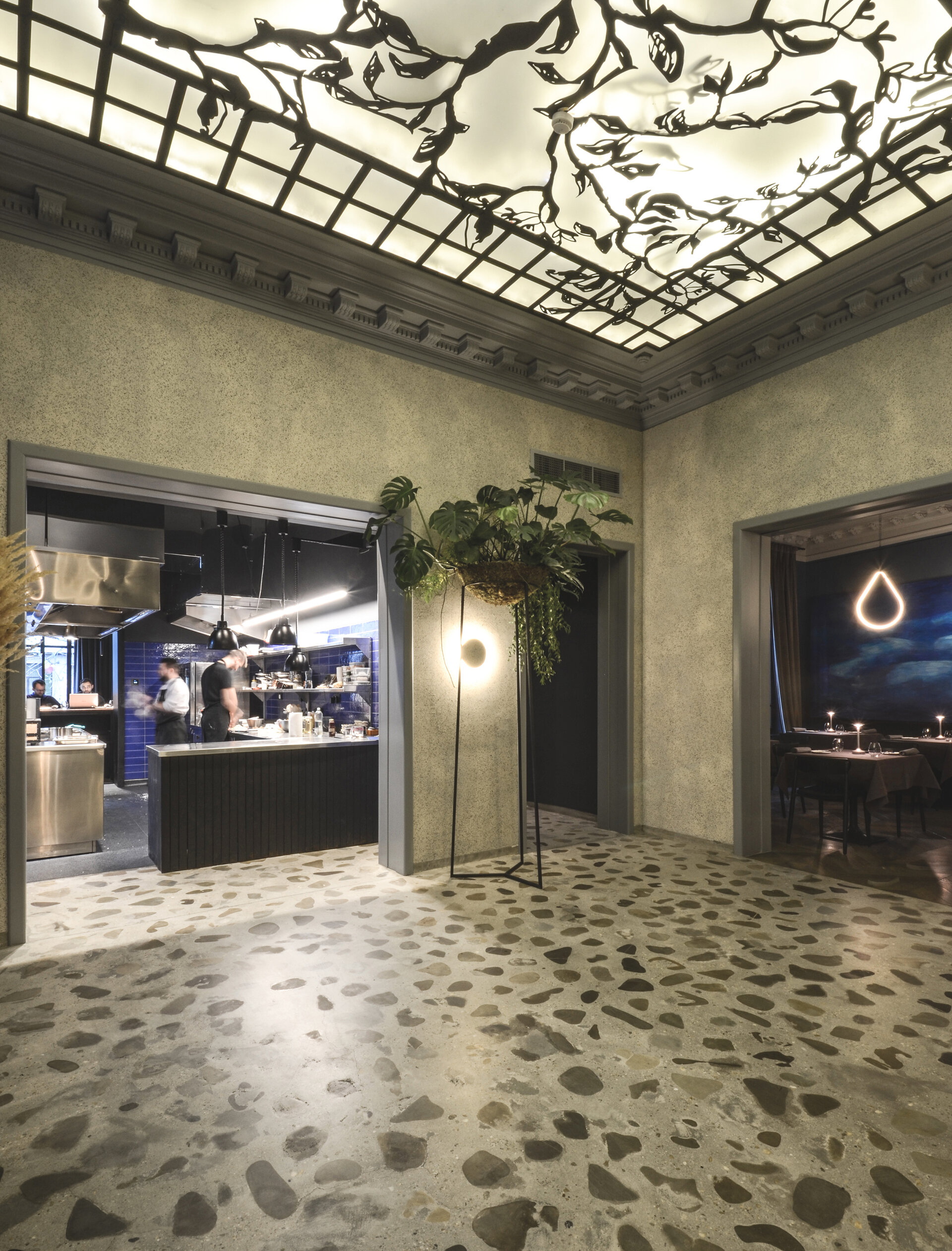 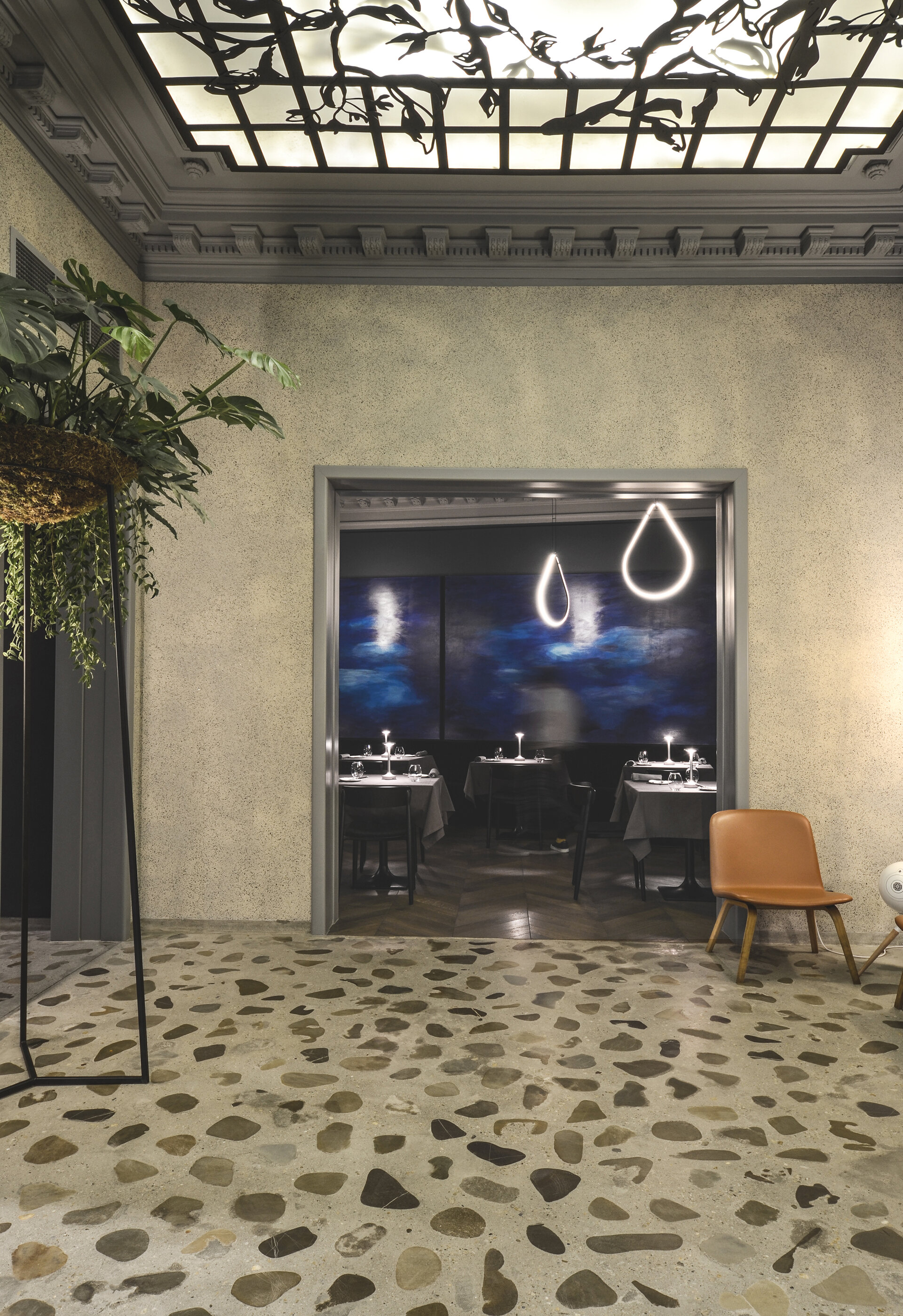 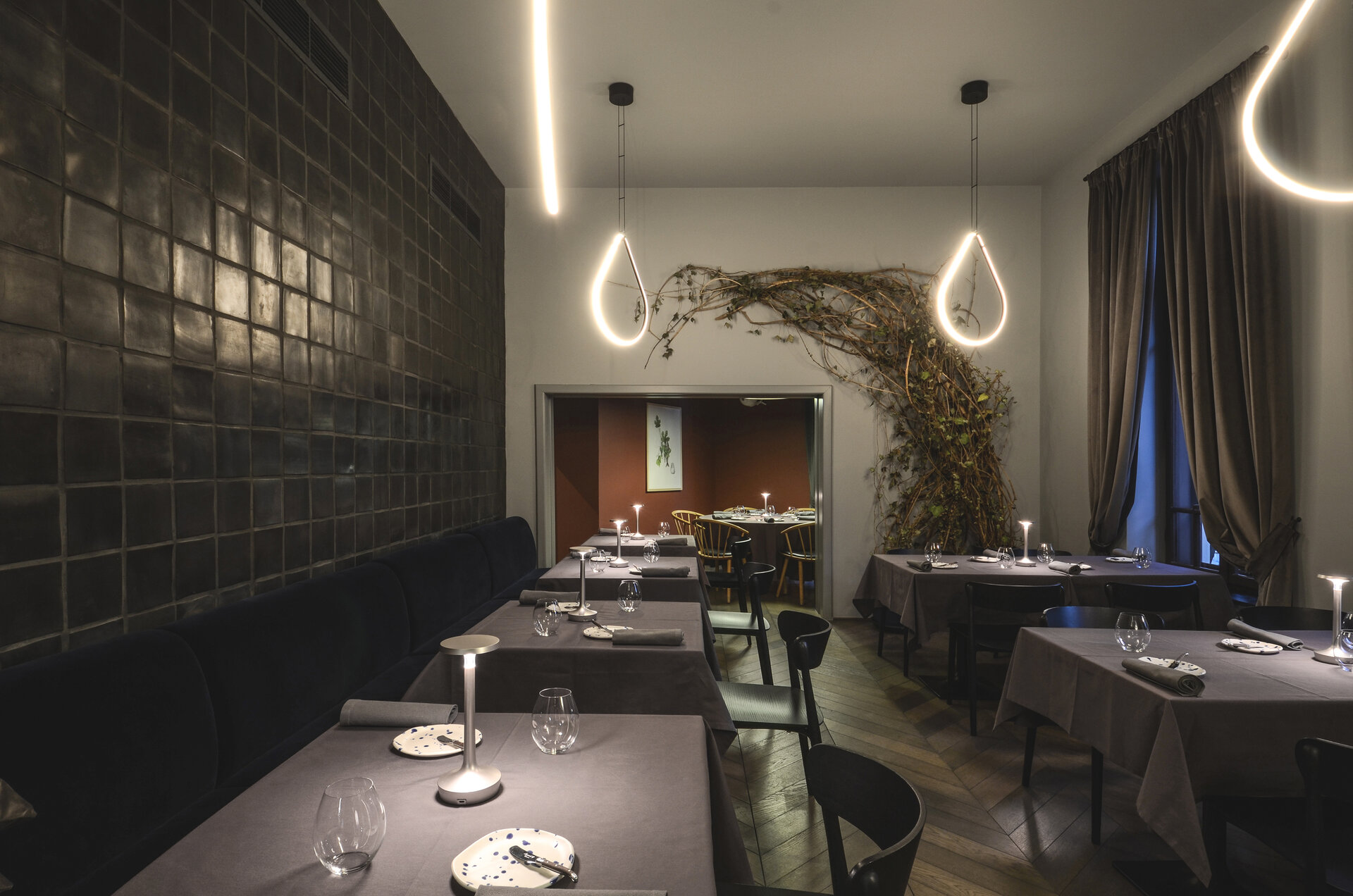 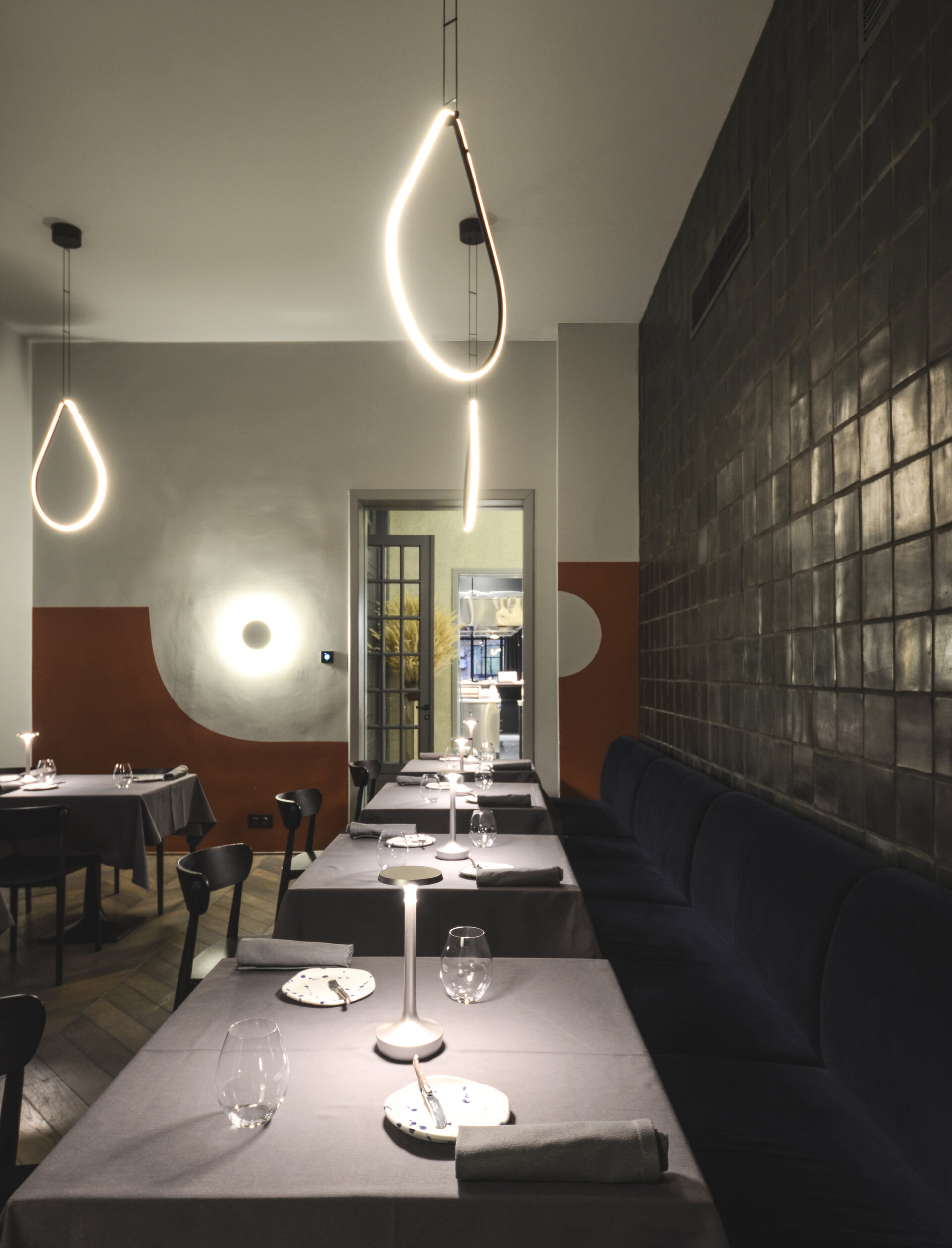 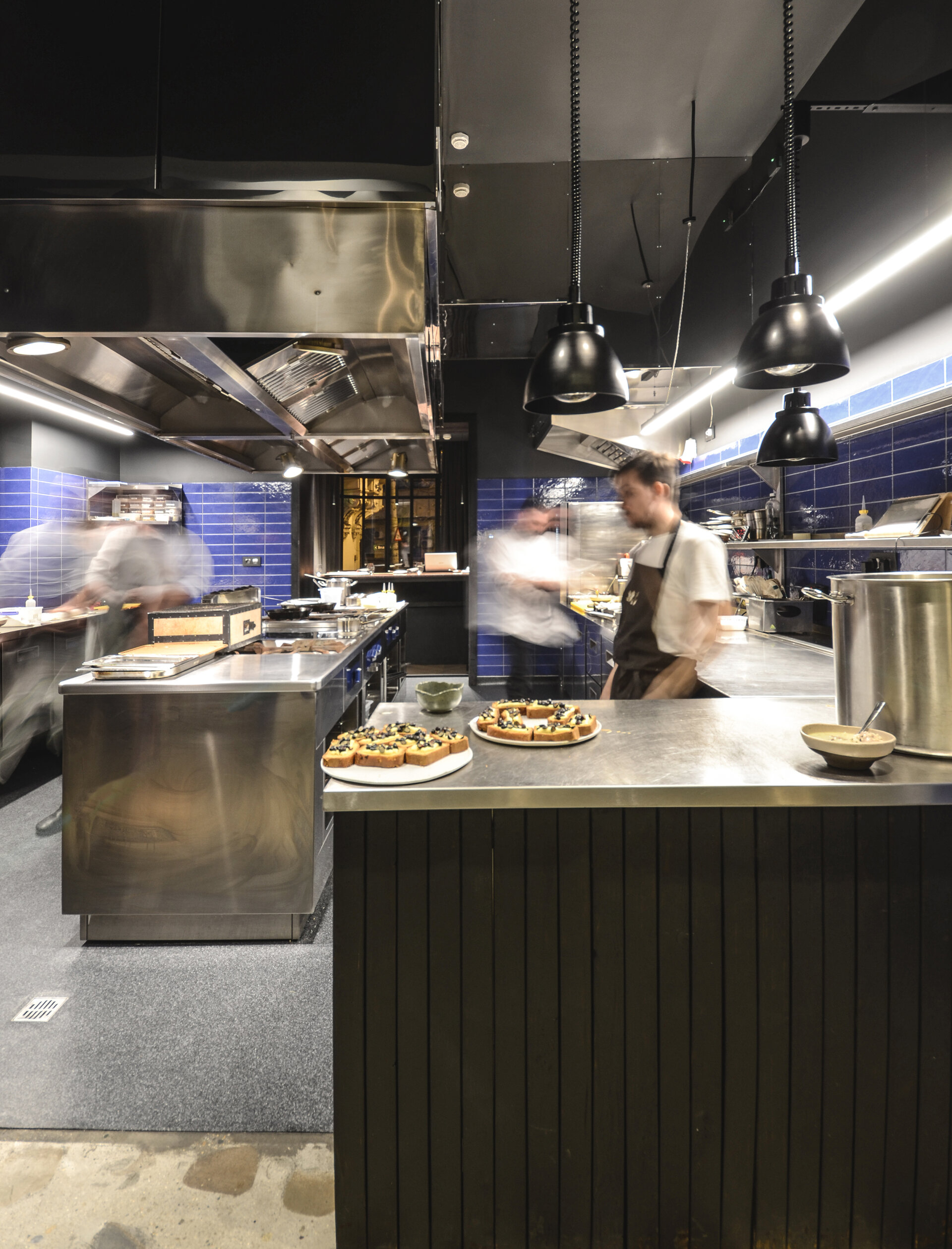 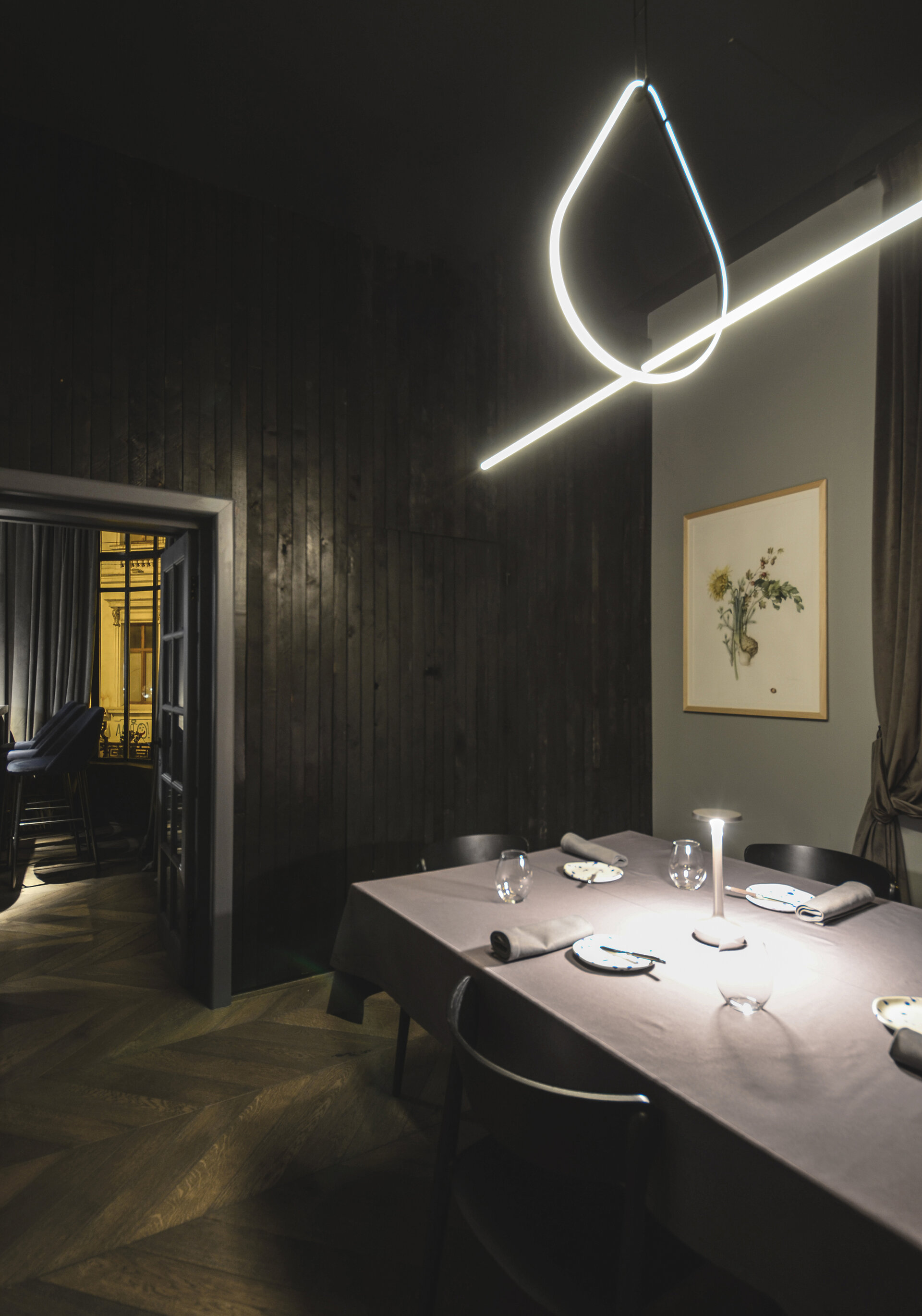 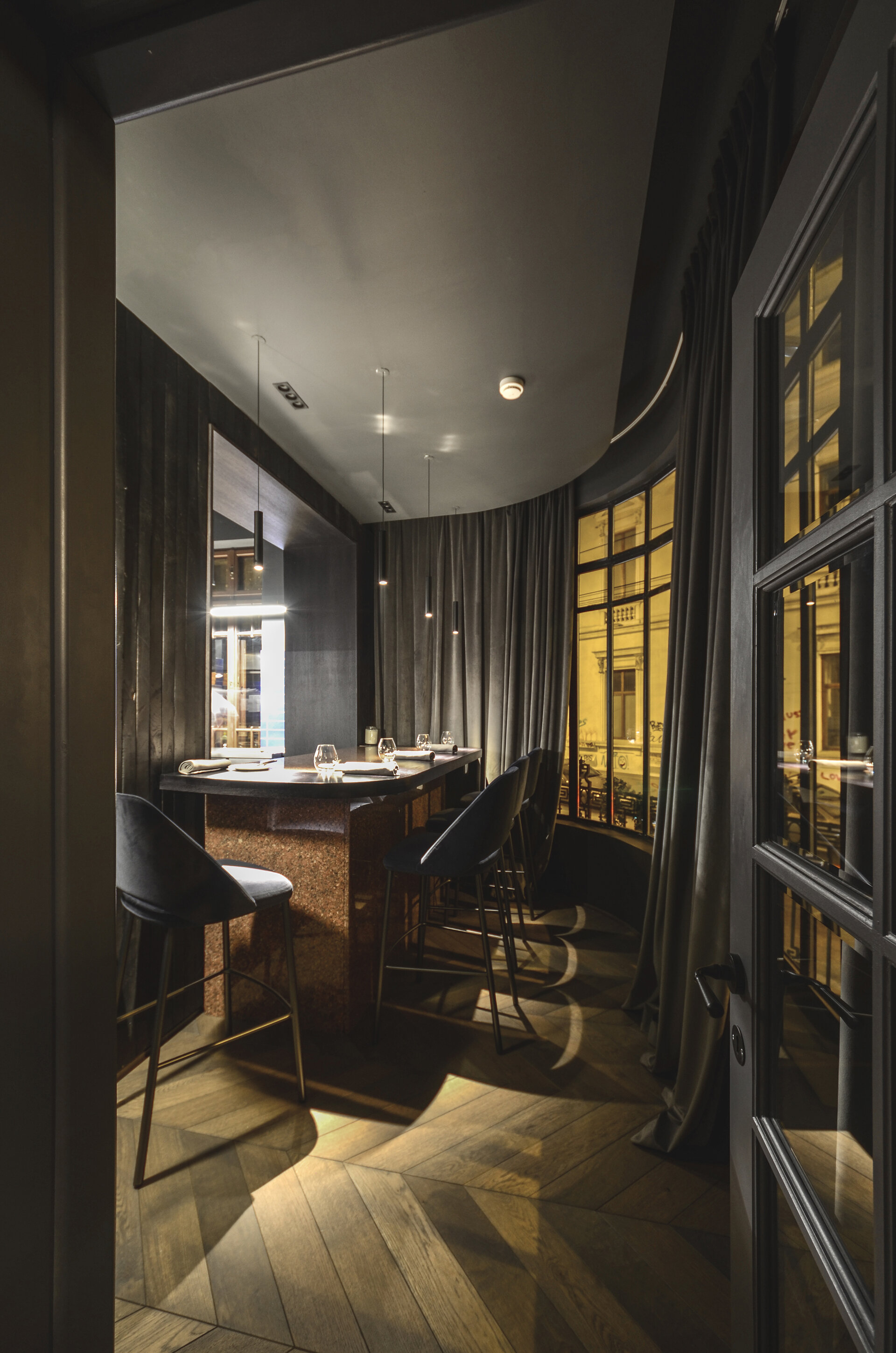 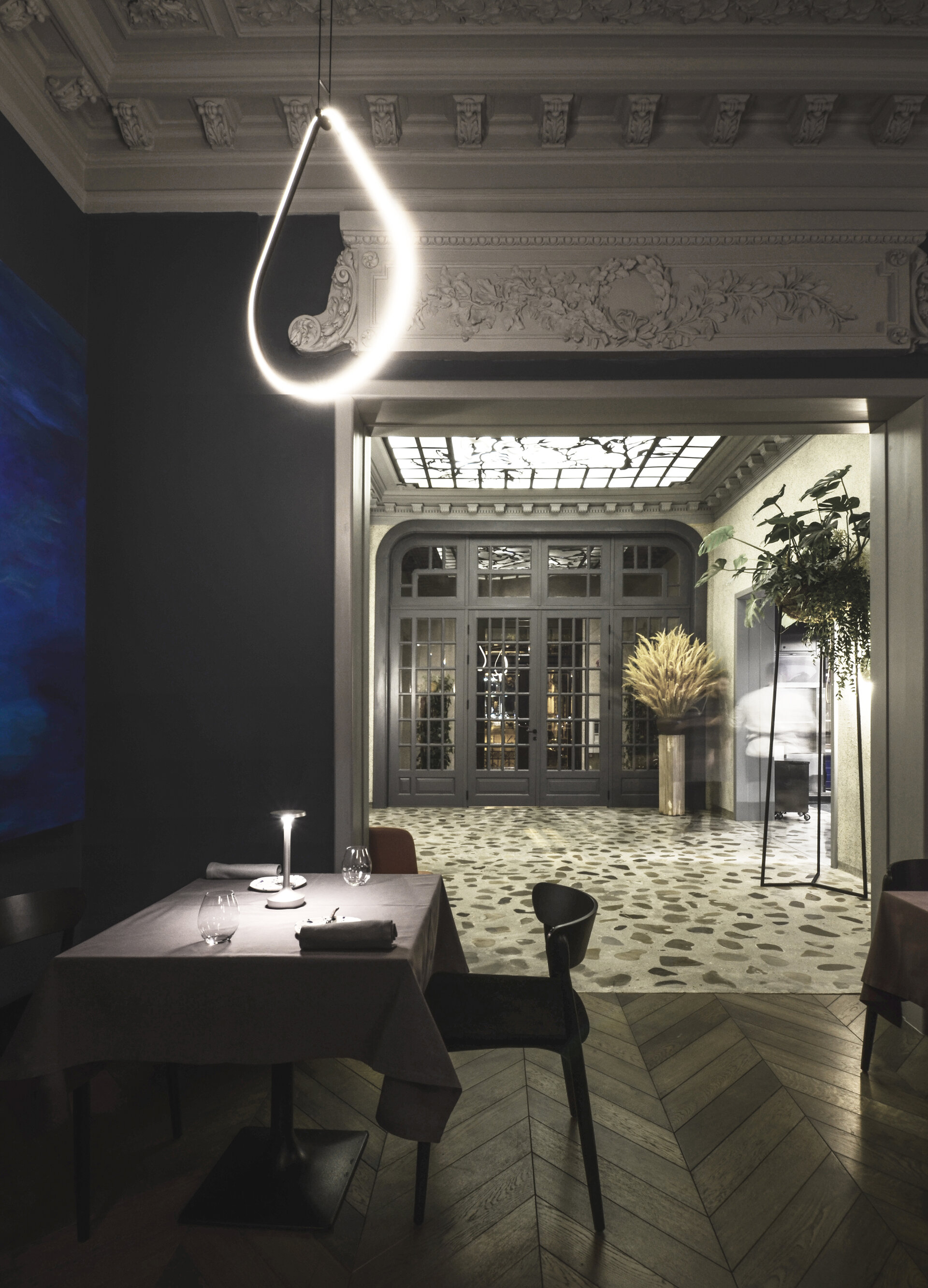 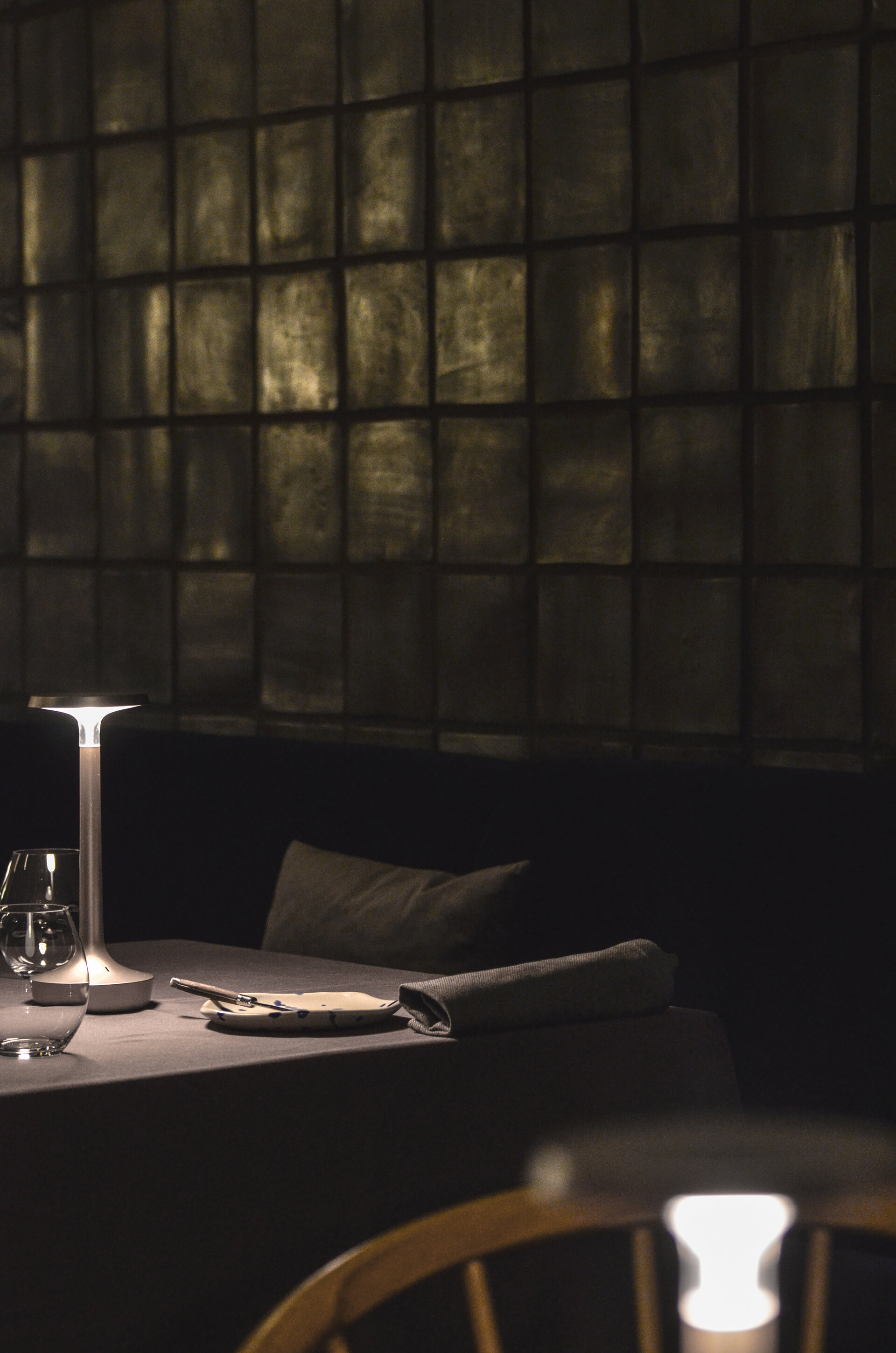 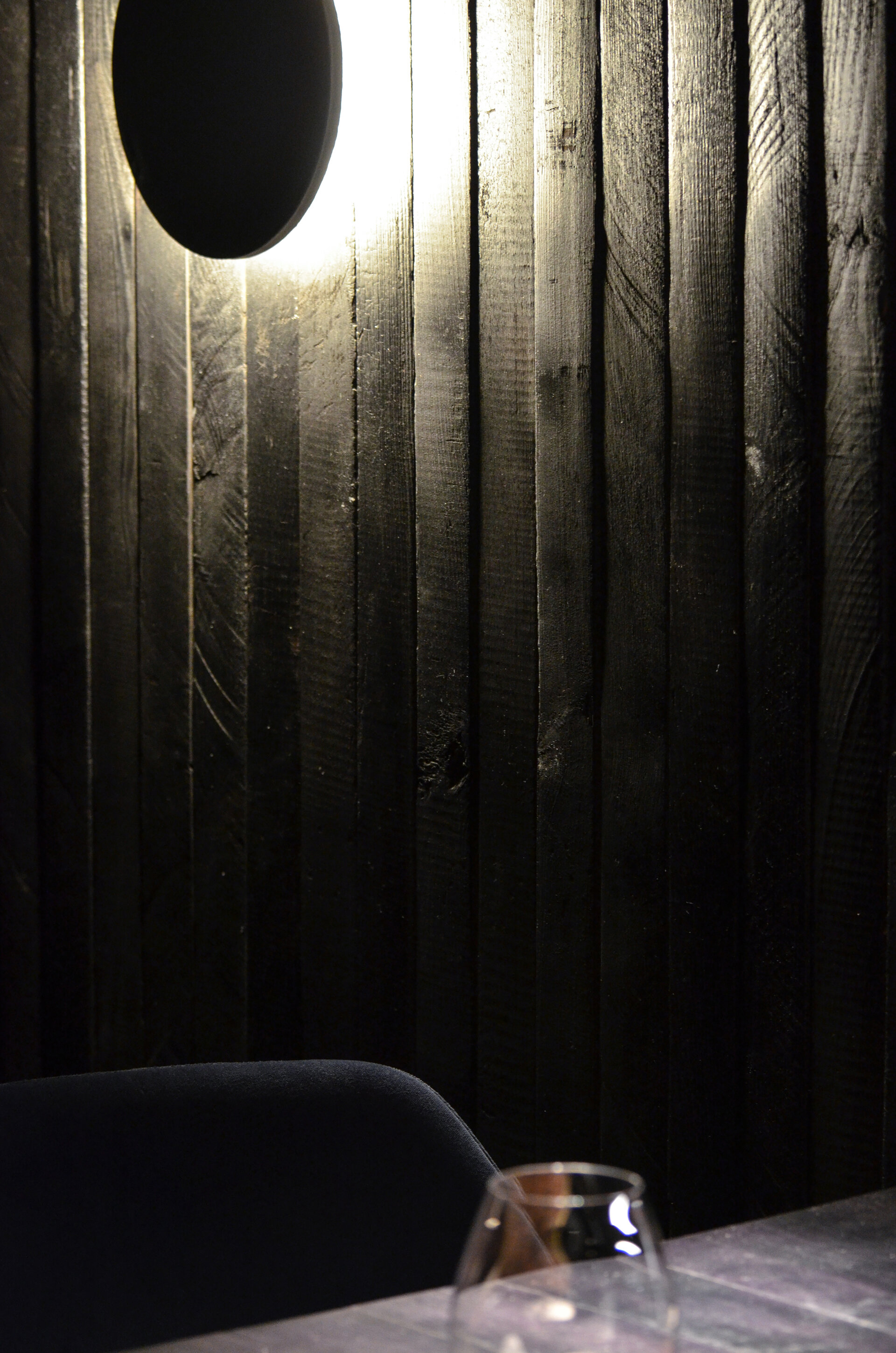 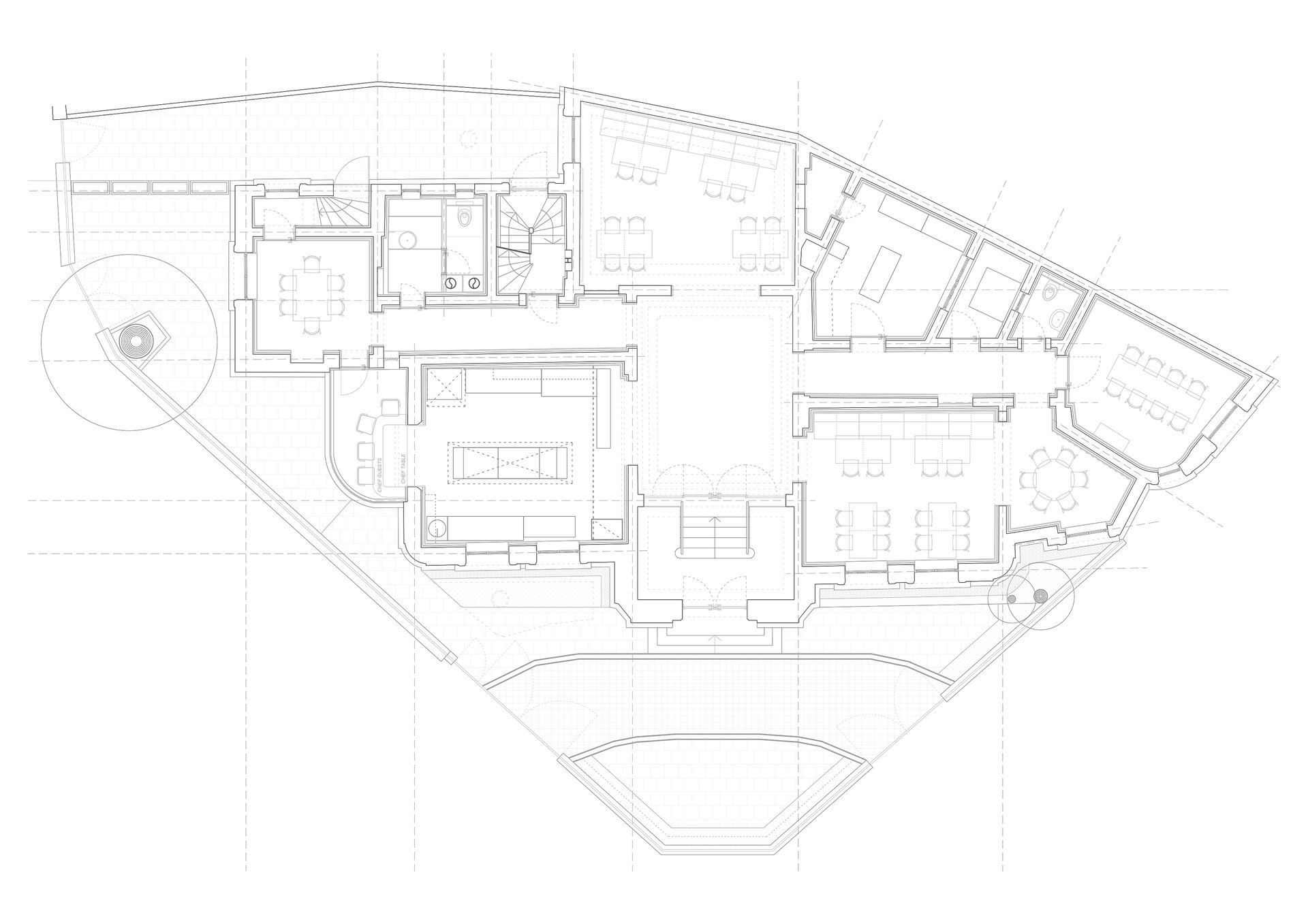