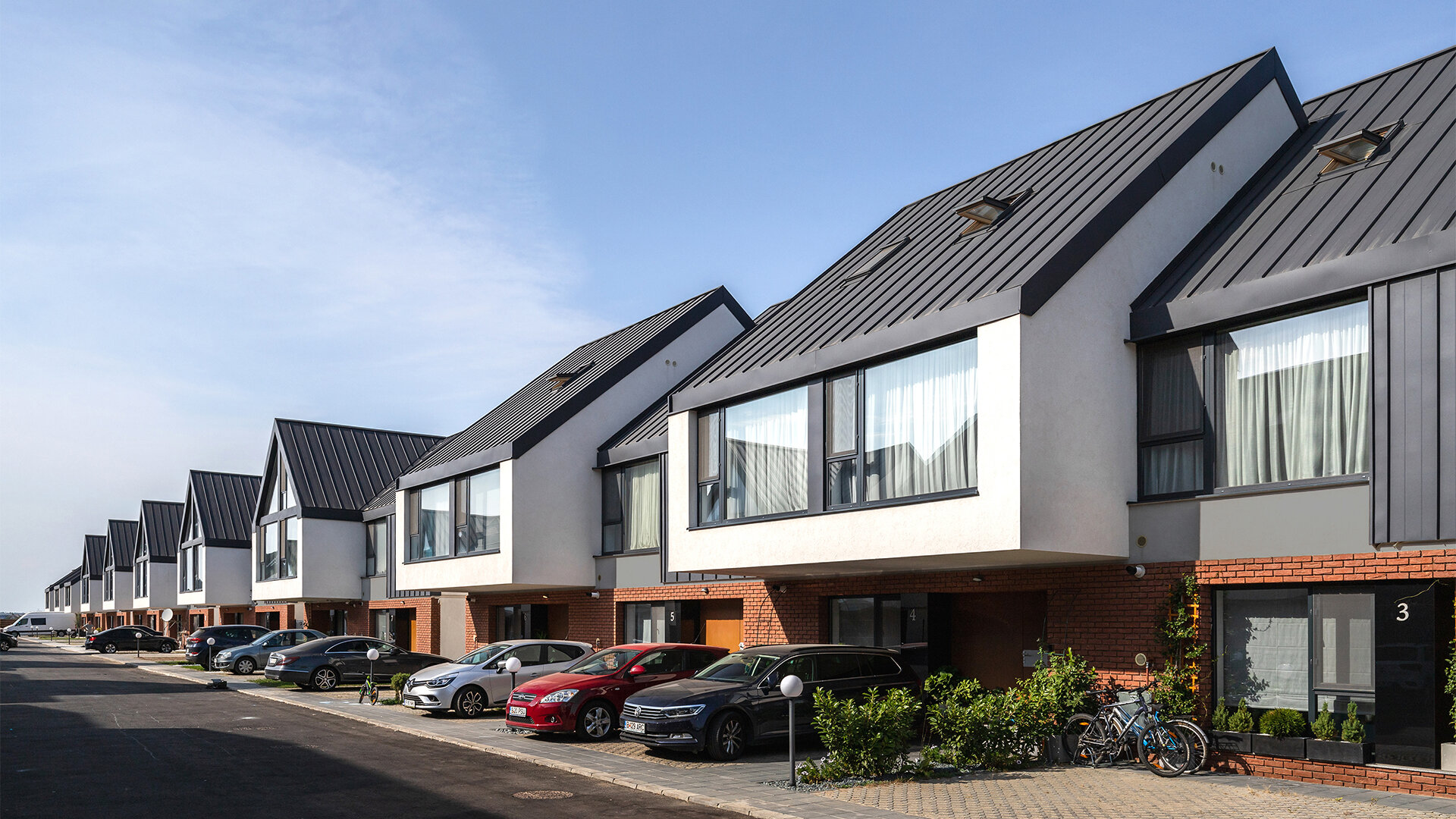 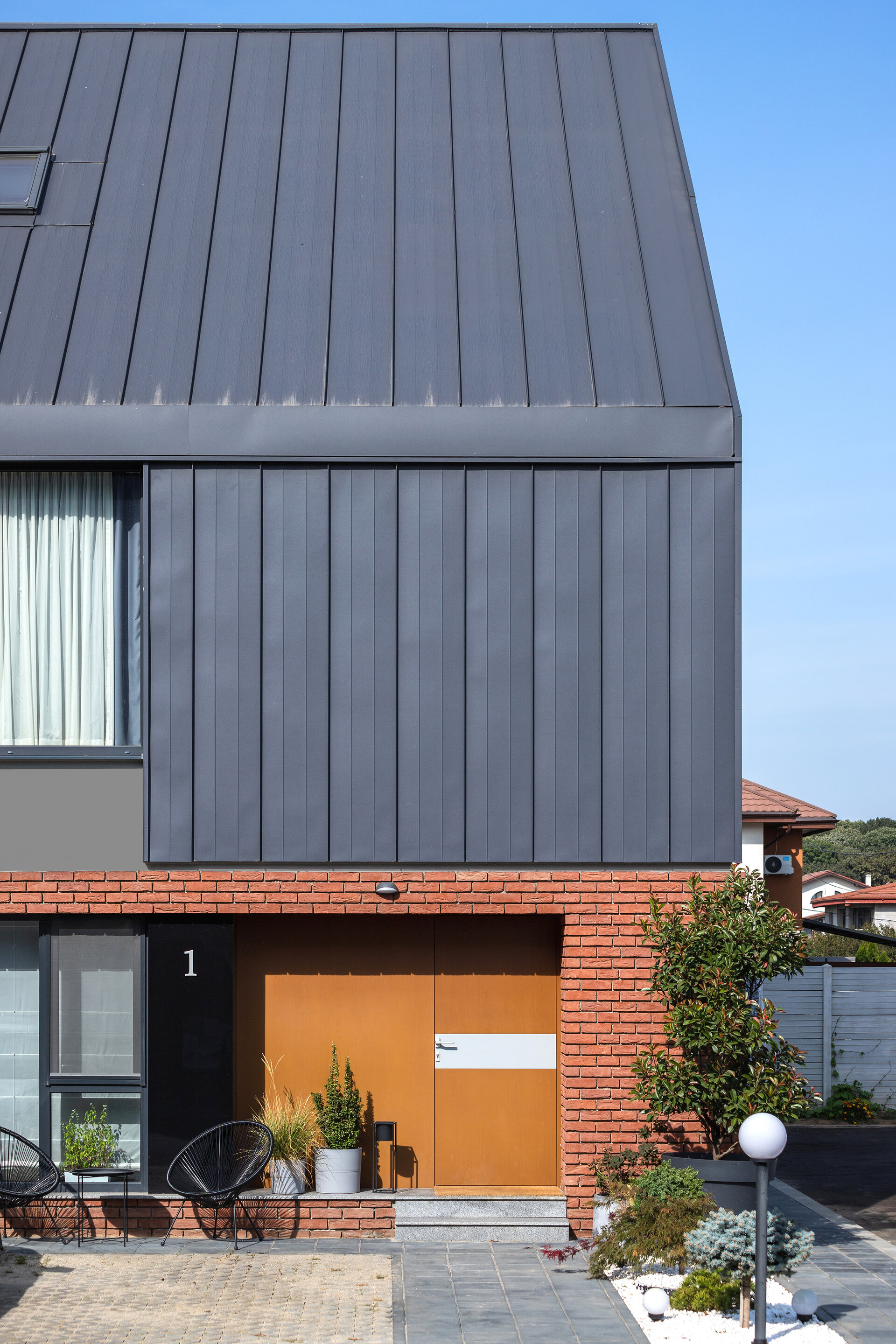 Millo Village is a complex of terraced houses and duplexes located in the north of Bucharest. It was designed in 2017 and the construction was completed in 2019. Placed on a 1 ha land, the complex of villas in Matei Millo Street is a closed residential complex and includes 24 row houses arranged in groups of six and of 20 houses, centrally located. To maximize the exterior space, the project proposes the creation of two house fronts lined up along the interior roadway. Thus, all homes have their own garden at the back of the lot, as well as on its side, in the case of coupled units or those lined up at the end. In order to avoid obtaining an infinite image, it was decided to alternate the two typologies of houses, the duplex and the row ones. Therefore, the duplex houses are located towards the middle of the front resulting a tension in the horizontality of the street caused by the appearance of the sharp front in the volume.
The partitions of the coupled and row houses are similar regarding surface area and space distribution, but they differ in the volume of the floor, which exceeds the console either to the main access or to the backyard, therefore generating a wider and less repetitive rhythm. Thus, looking from the street perspective, every two adjacent houses seem to form a single module. The different roof of the two types of volume - with the ridge parallel to the street for the row houses, and with the four-ridged roof and glazed tympanum to the coupled houses - helps identifying each unit.
From the volume point of view, the houses maintain a height regime of GF + 1 + At. The volumes have 2 registers: a brick one corresponding to the ground floor, over which a clean, white volume with metal accents that encompass the night area is suspended. Thus, while the ground floor, finished with brick and wood-textured panels of each group of houses forms a continuous and unitary plan towards the alley, the facade of the upper floor, covered with dark tin areas arranged vertically following the roof and with white plaster, ensuing a broken line and animating the volume through the shadow it casts on the ground floor.
From the planimetry point of view, the houses have four rooms and are organized in the functional logic of placing the day area on the ground floor, in direct connection with the back garden terrace, while the upper floor, developed on a larger area due to the exceeded console, encimpasses three bedrooms and two bathrooms. Due to the distanced floor plan between any two adjacent modules, all bedrooms facades benefit from increased privacy. The attic with an area almost equal to the living room one is the fifth room, a non-conformist space that can be arranged both functionally, as a fourth bedroom, and free, as a hobby area and creative activities area.
The complex is completed by a common public space - a planted and shaded playground, which is located at the entrance to the complex, as well as a parking lot for visitors that distances phonically and visually the first villas from the heavily circulated access street. The complex enclosure, dominated by dense sectors but also with transparent ones that invite for exploration, resumes the finishing materials of the houses - brick, grilles and plywood sheets, white canopies in the console next to the pedestrian access. 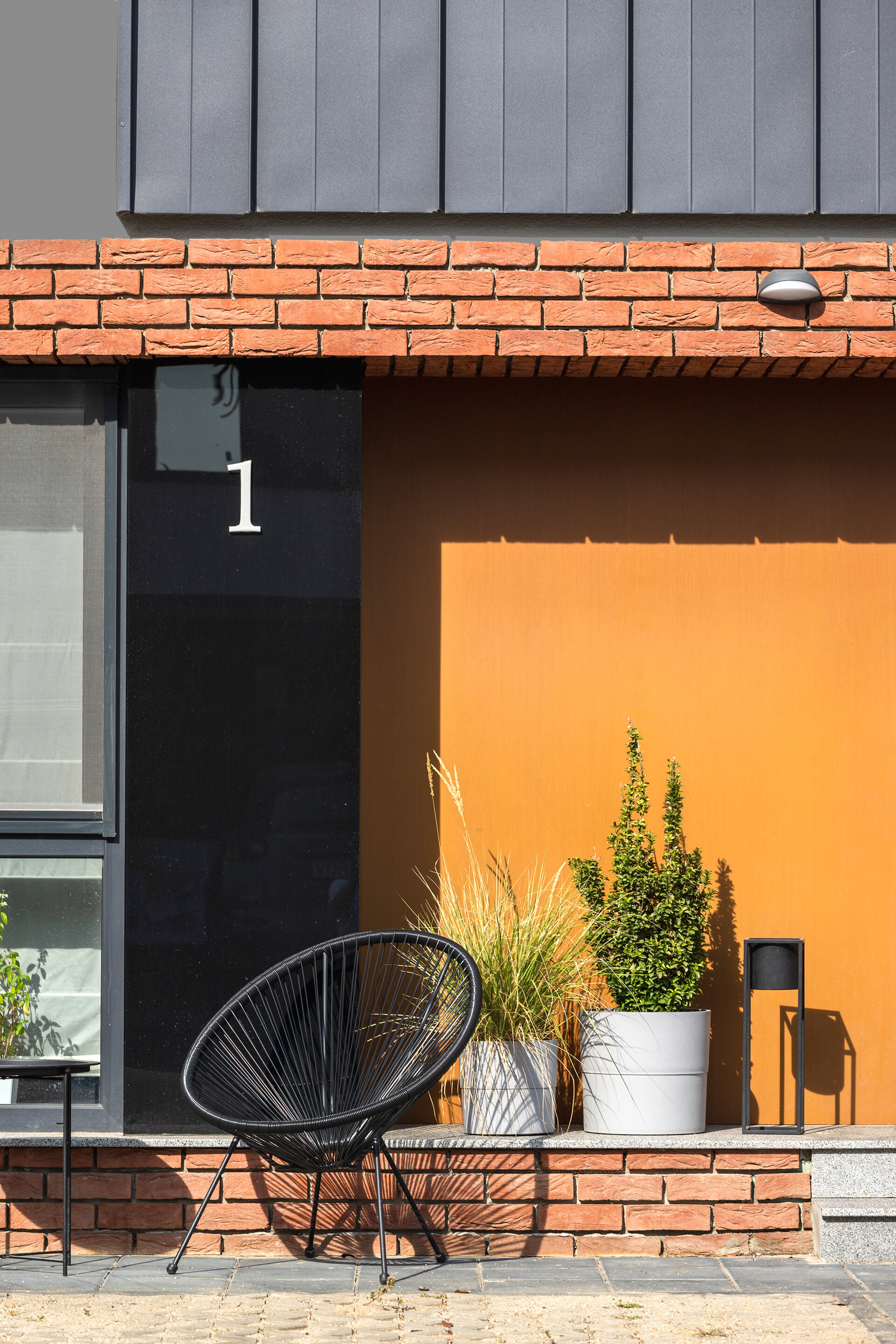 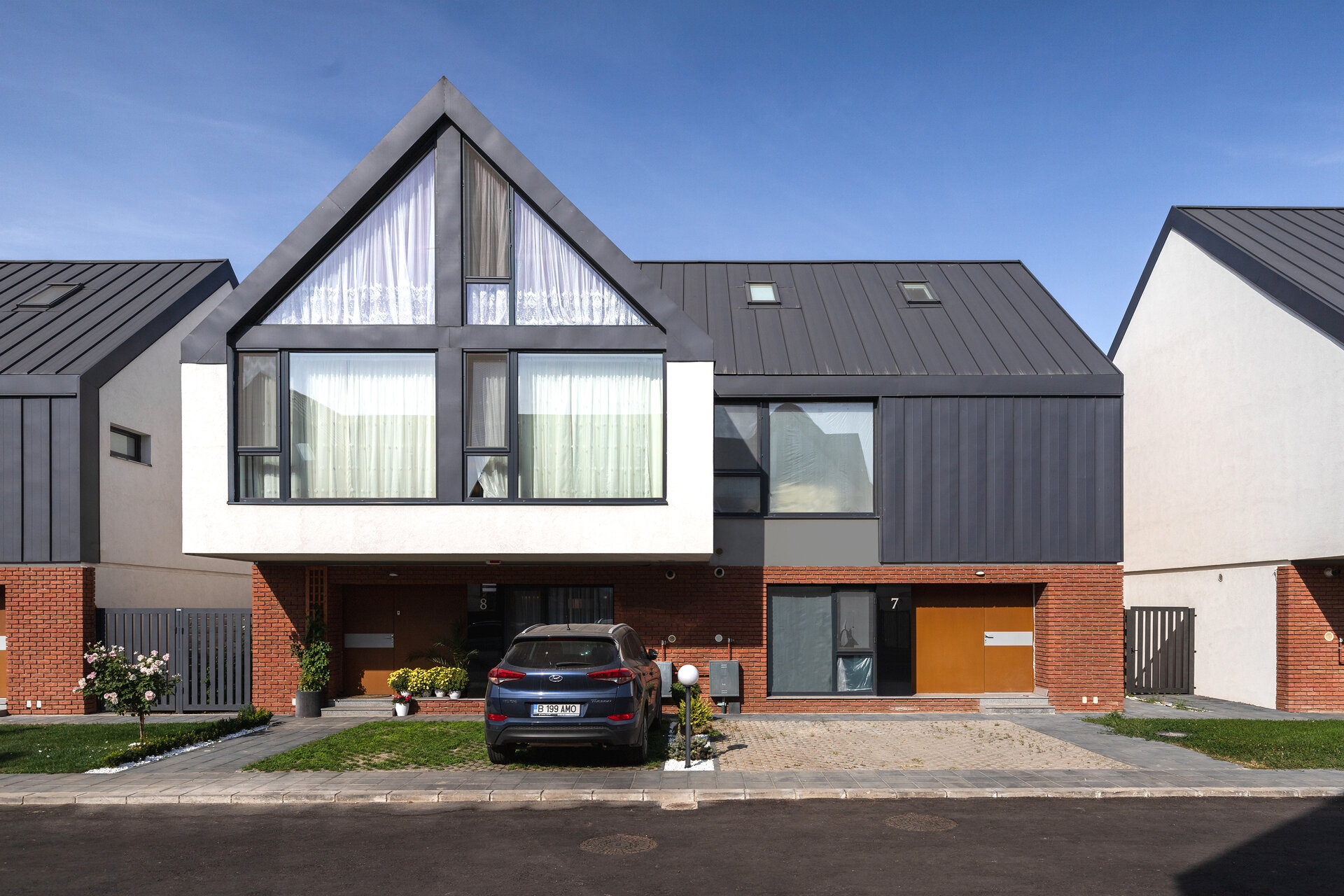 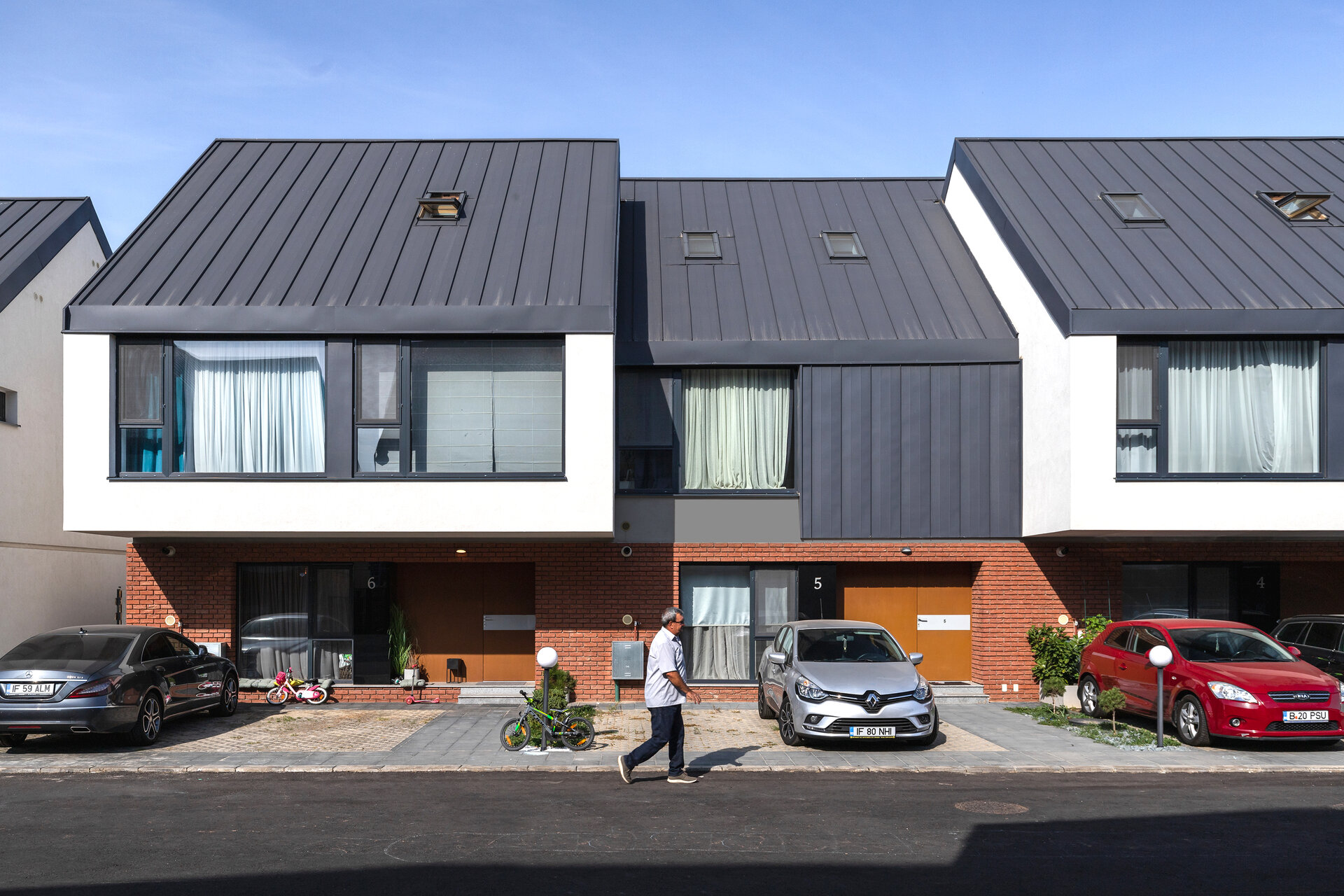 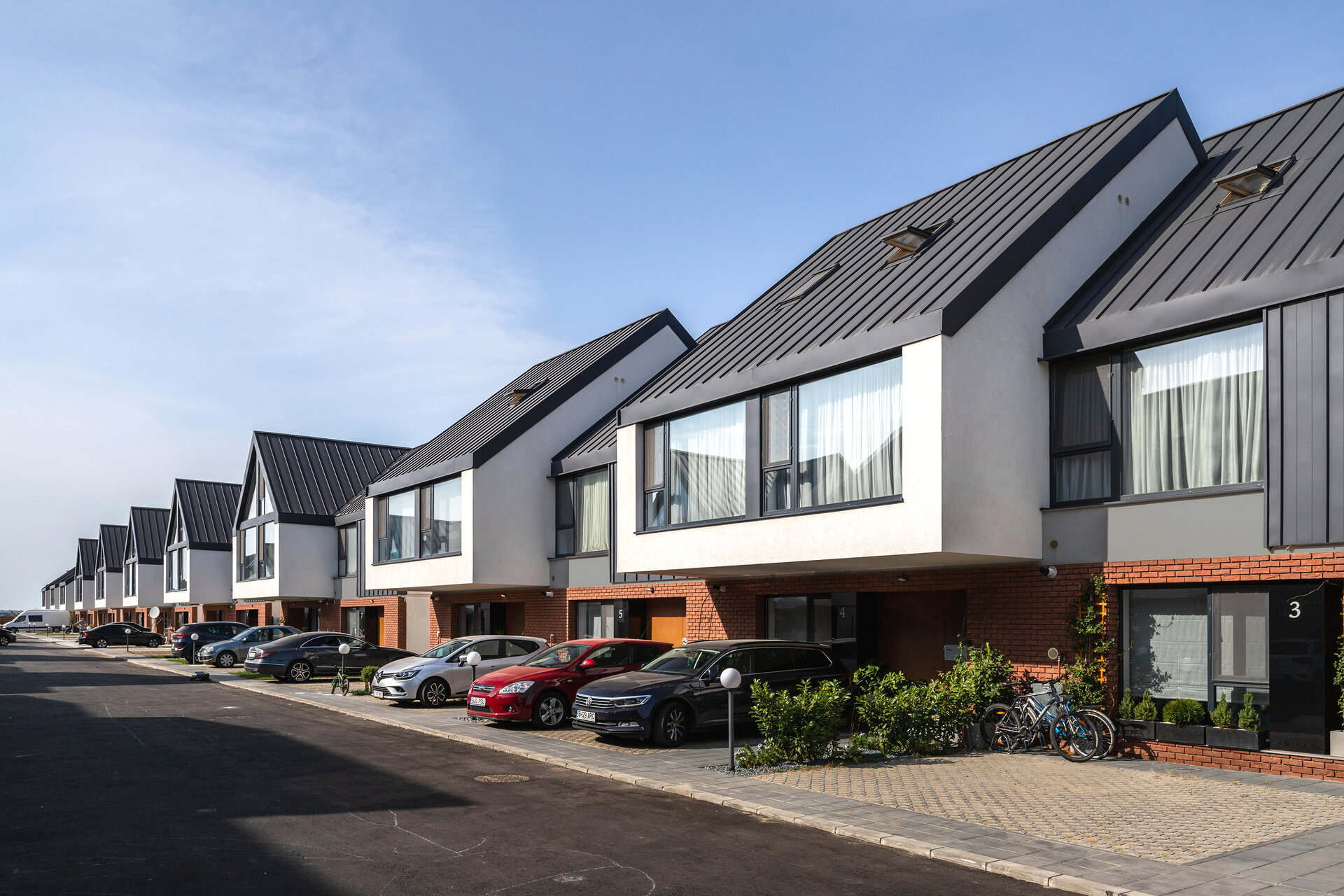 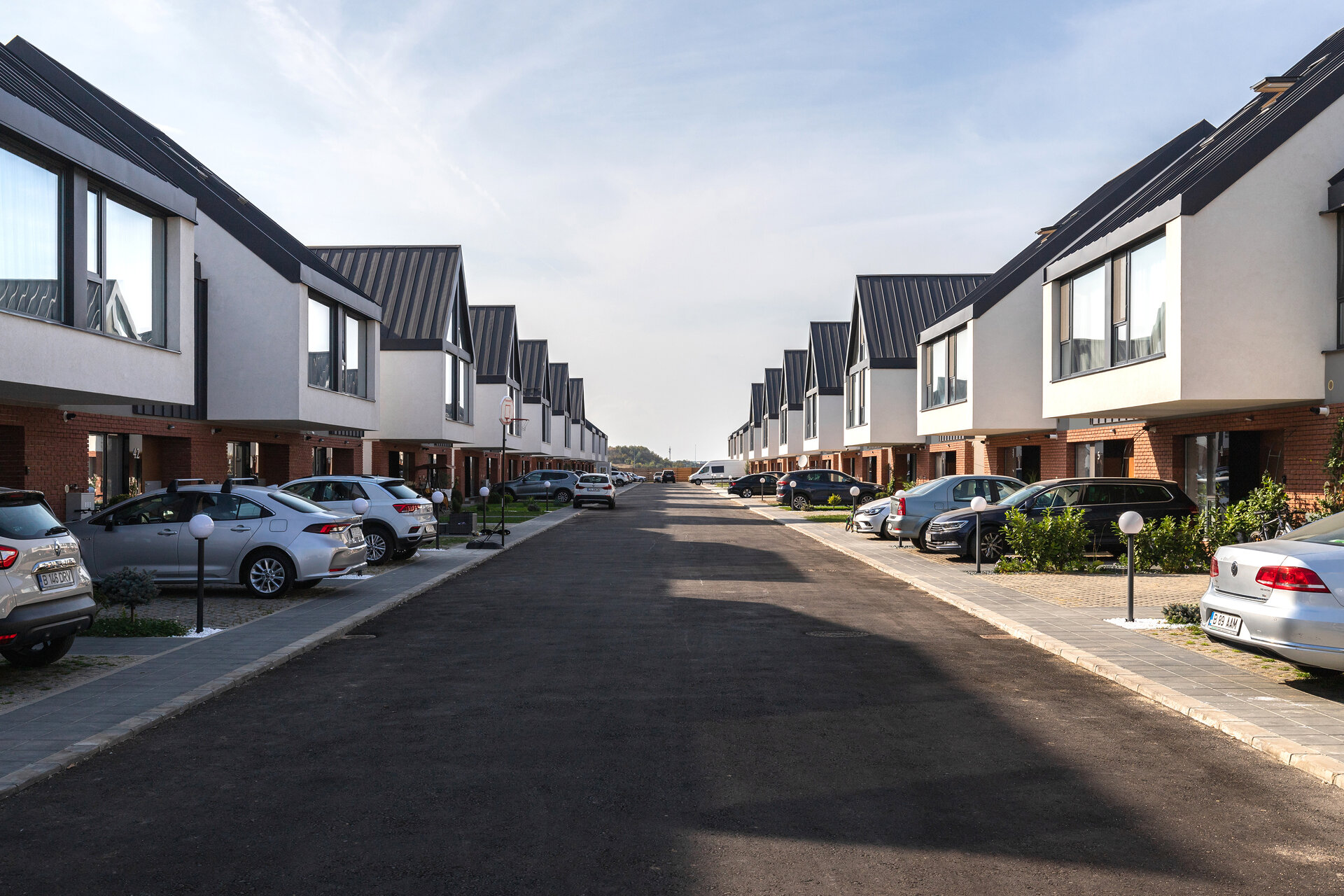 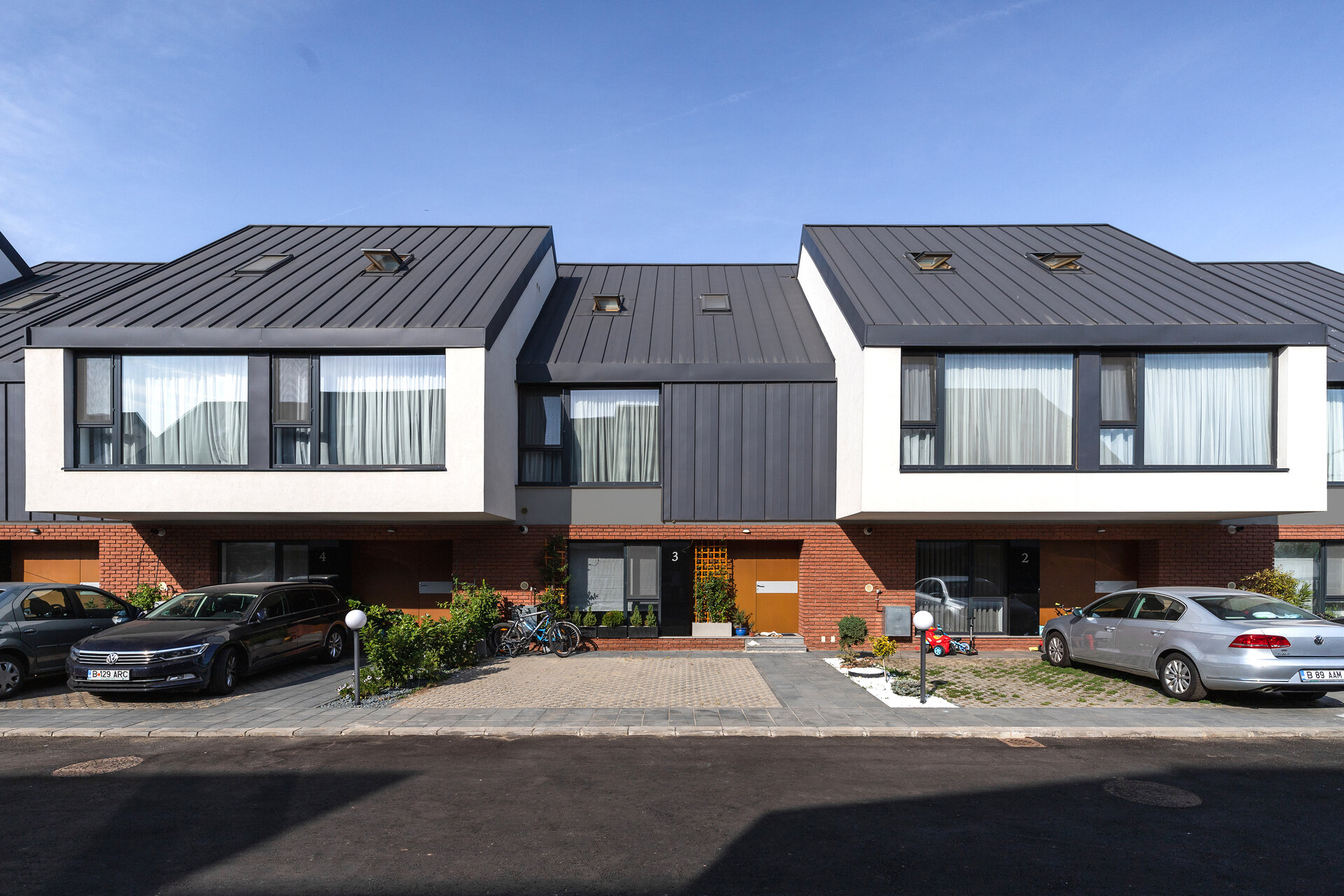 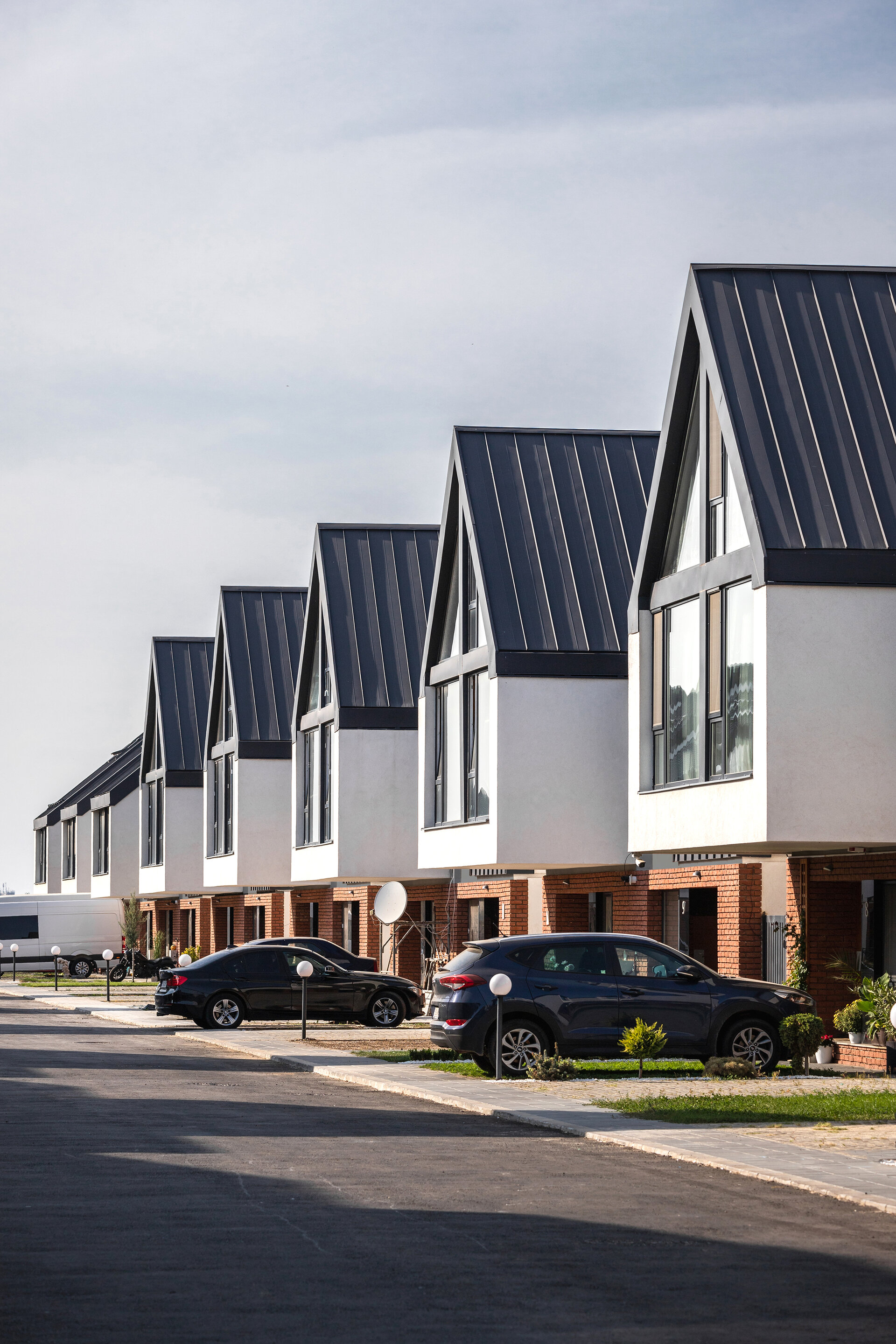