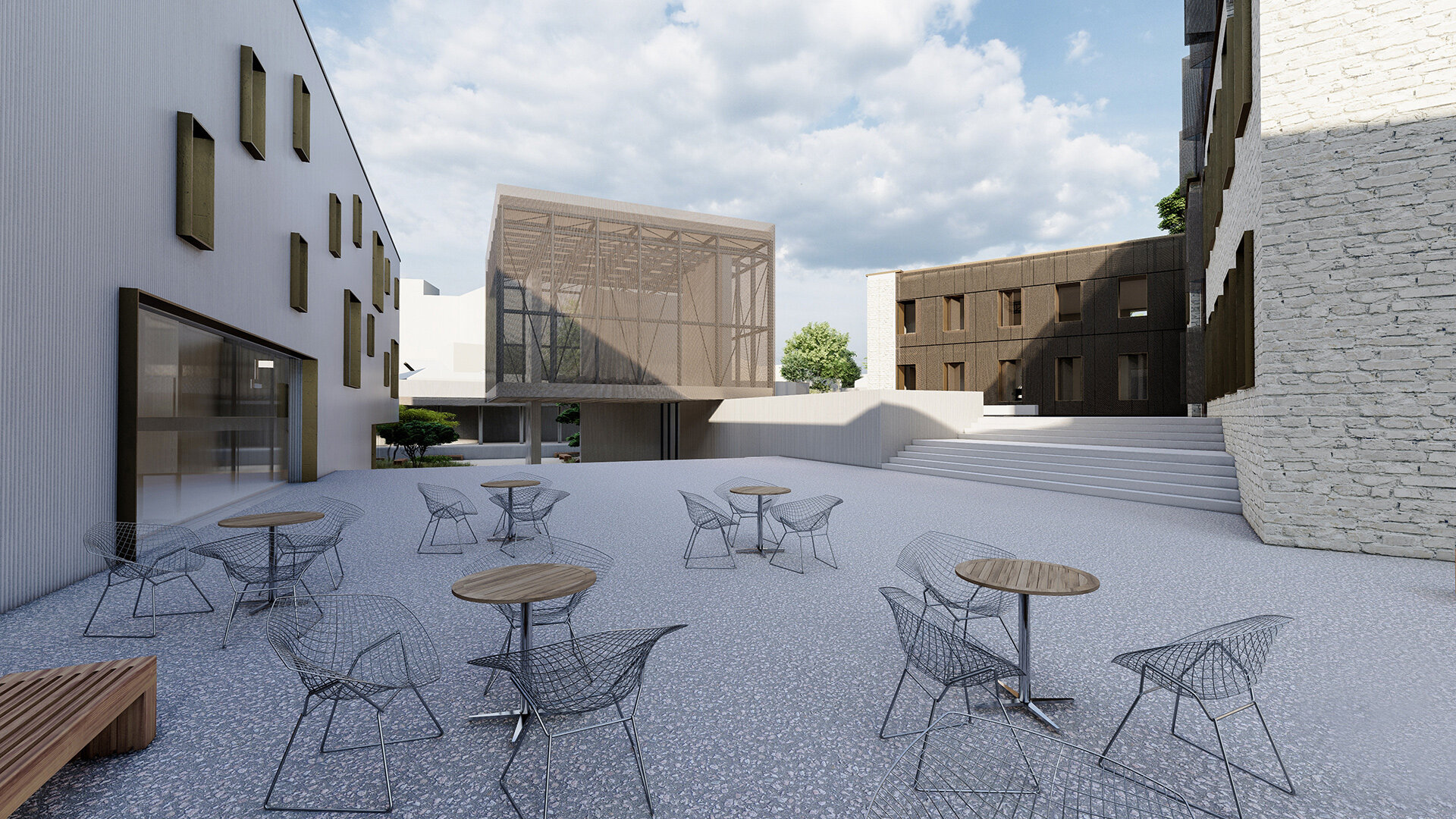 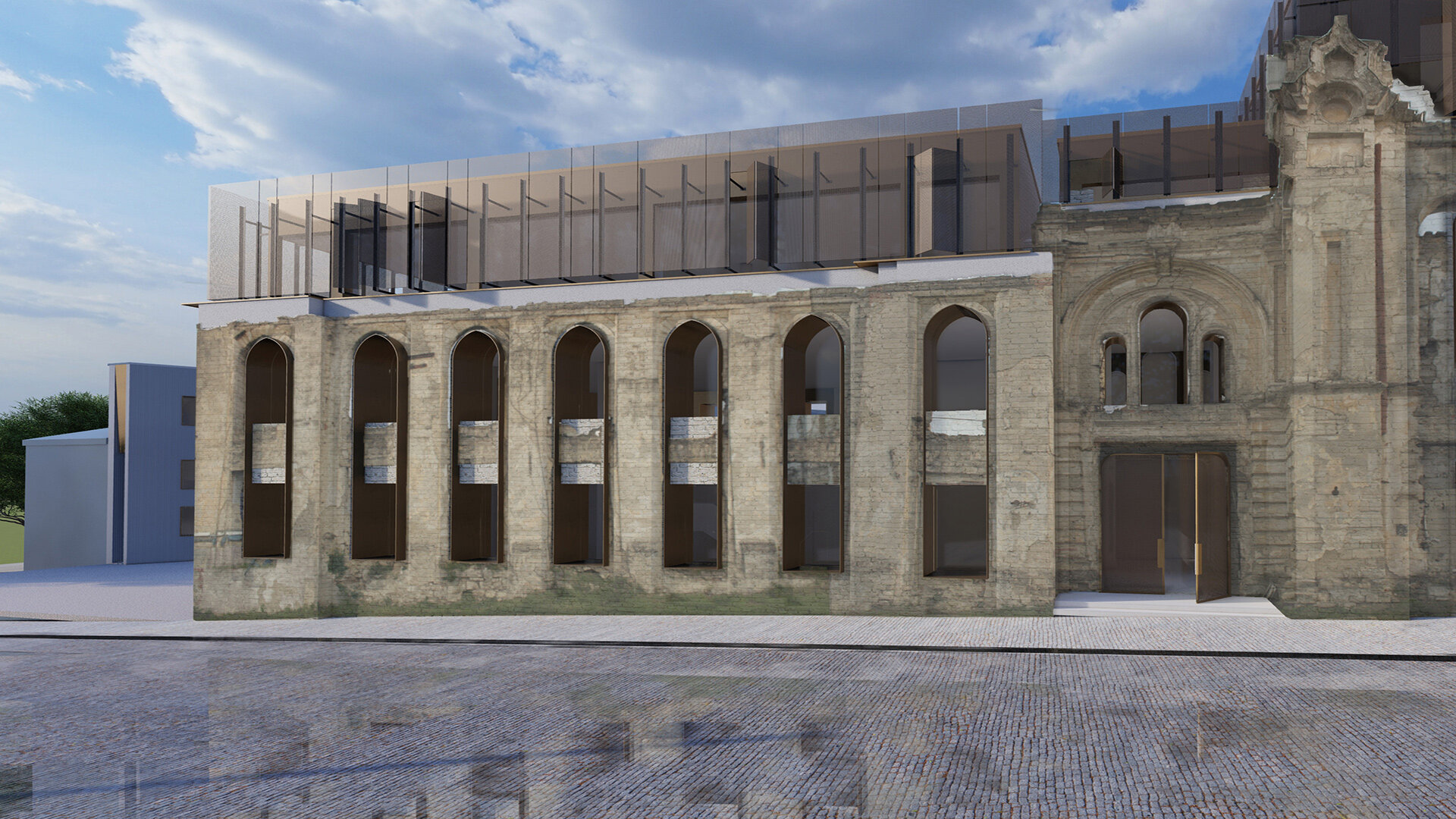 Located in the historical center and, at the same time, within the limits of the former Jewish ghetto of Chisinau, the project aims to become a place of interethnic reconciliation. The location of the site, as well as the presence of the ruin of the former Yeshiva are conditioning an intervention that integrates the historical, symbolic and socio-cultural value of the place. A suite of public spaces with a different degree of intimacy and permeability brings the project between a place of memory and everyday urban life, becoming a link between the Jewish community and townspeople, opening towards the testimony of a common memory - the walls of ruin. Public spaces mediate the separation between the two functional areas of the community center: the public cultural part and the social part, which is addressed exclusively to community members, while maintaining the physical and visual relationship between the areas developed around the two courtyards.
The project involves the conversion and expansion of the former Chisinau Yeshiva. The suite of hierarchic public spaces brings the project between a place of memory and everyday urban life, the exposed walls of the ruin remaining a witness of the common tragedy.
As we speak about an ethnic neighborhood which original inhabitants were vanished, the authenticity of the spatial organization was affected as well. Very few fragments of the former space structures and building typologies were preserved. Some of them are the courtyards with inner space-oriented buildings - the particularity the project aims to integrate.
Speaking about the spatial concept, the intention was to find a suitable response for each situation, as the site opens towards 3 different streets. By its geometry, the site can be divided into 2 areas. The side where the old building is located, opens toward the boulevard and proposed pedestrian street and have a representative and public potential, that allows to bring the project somewhere between a place of memory and the daily urban life, through some public spaces. While the other part which is bordered by the 2 secondary streets, has a less open and public character, suitable for community use only functions. So, this is how the geometry of the site and the surroundings define 2 functional areas, grouped around 2 different courtyards, which have a physical, functional and visual connection.
In terms of functions, the old building will host the cultural and public part of the ensemble: main exhibition of Hebrew heritage, temporary exhibitions, the event hall, the library, conference rooms.
The new building has a social function, hosting the accommodation for elderly in the care of community charity organization, some care facilities. The 2 areas are connected through the basement, due to the natural level difference between the streets.
The main access to the cultural part is at the basement level, which is a functional solution and a symbolic instrument that is conditioning a certain path. It allows to connect the two courtyards, as well the 2 different areas with the religious space preserved in the basement of the old building. In this way it cand be accessible as for residents, as for visitors. The relationship between the public area and the one for community use only is attenuated by the portico that defines the 2 spaces and the path leading to the religious space - mikveh.
In the other part of the existing building is the permanent exhibition hall, from where the exhibition path begins. In the community area, due to terrain level difference, is the ground floor level where all the semipublic spaces are: the restaurant, the meeting spaces, reception, administration office.
On the ground floor, the main entrance is anticipated by an alveolar plaza that follows the pedestrian street along the main building facade. In this point, the outdoor public spaces are divided to address different users and uses, but keeping a visual connection. Along the 1sh plaza, develops some public functions: as a café, bookshop, souvenir shop below, that are meant to keep this space populated. The ground floor of the existing building hosts an event hall that can be accessed from the street entrance that connects the street and the back outdoor public space at the same level. On the 1st floor, there is the functional continuation of the ground floor: temporary exhibition hall, the event hall balcony, the backstage spaces, and the library access which has a double high. So, there are some vertical functional and visual connections.
The central space is marked by the presence of a volume suspended above the main entrance, that’s hosting a multifunctional space and it’s meant to represent an attraction point from the street and to articulate the plazas situated at different levels due to site constraints. The cube can be accessed from the basement main distribution hall, or from the terrace which connects the accommodation building and the cultural area. It is sustained by 3 major linear structural elements, that also have the role of different space separation and also sustaining the 2 floor slabs.
The extension and the completion of the missing parts, a perforated steel panels façade system is proposed, emphasizing the ratio of the mass and the voids for the missing original walls. The material and grooving were chosen in order to clearly mark the intervention. Also, the metal windows lining frames are able to create a visual connection between the old outside wall and the new one which is behind it. The perforated sheet metal panels are also found in the facade elements of the other two buildings - the accommodation area and the central multifunctional hall, creating a unitary image of the ensemble. The choice of materials and technical solution is subordinated to the idea of preservation, dialogue and cohabitation. 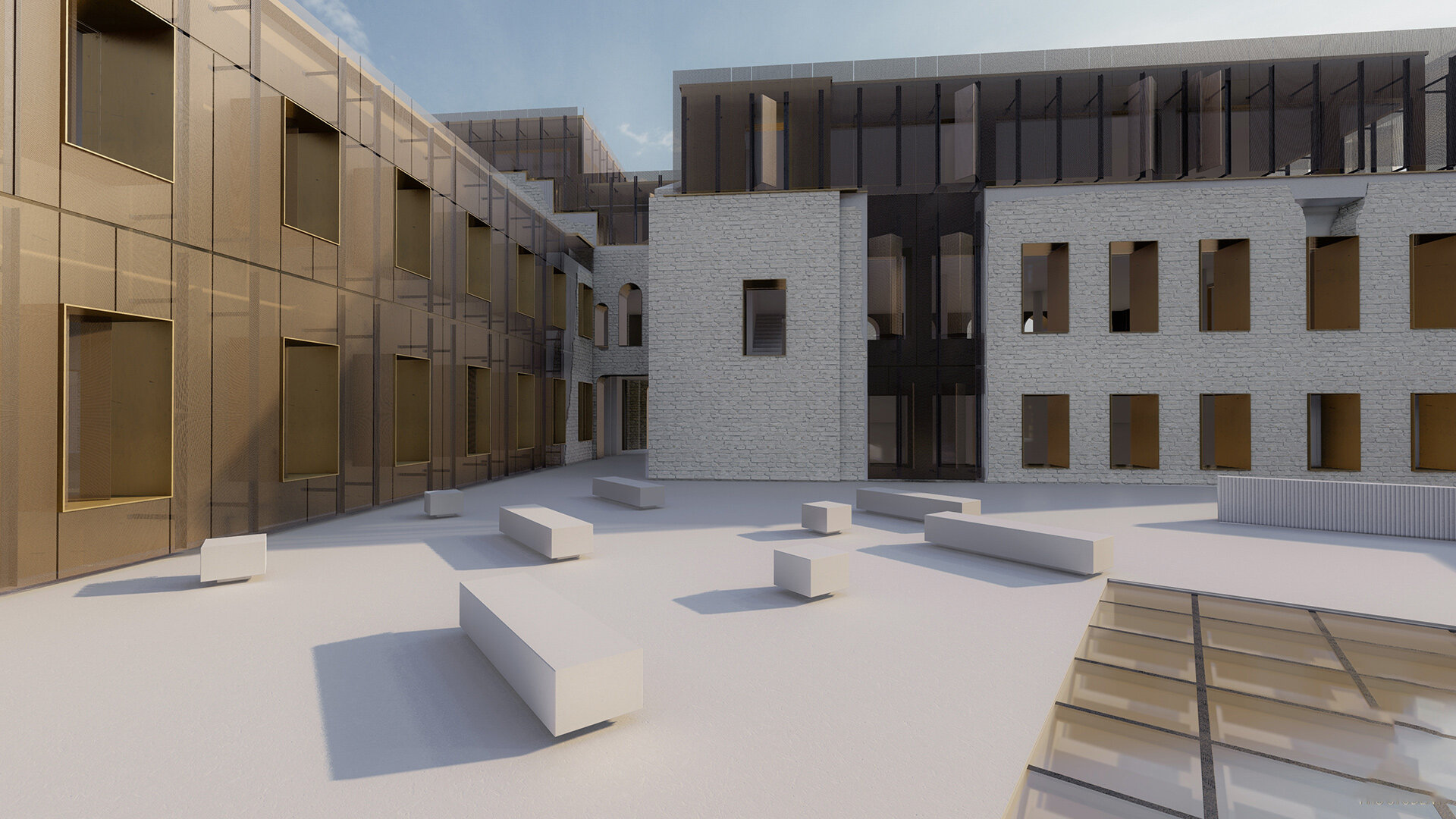 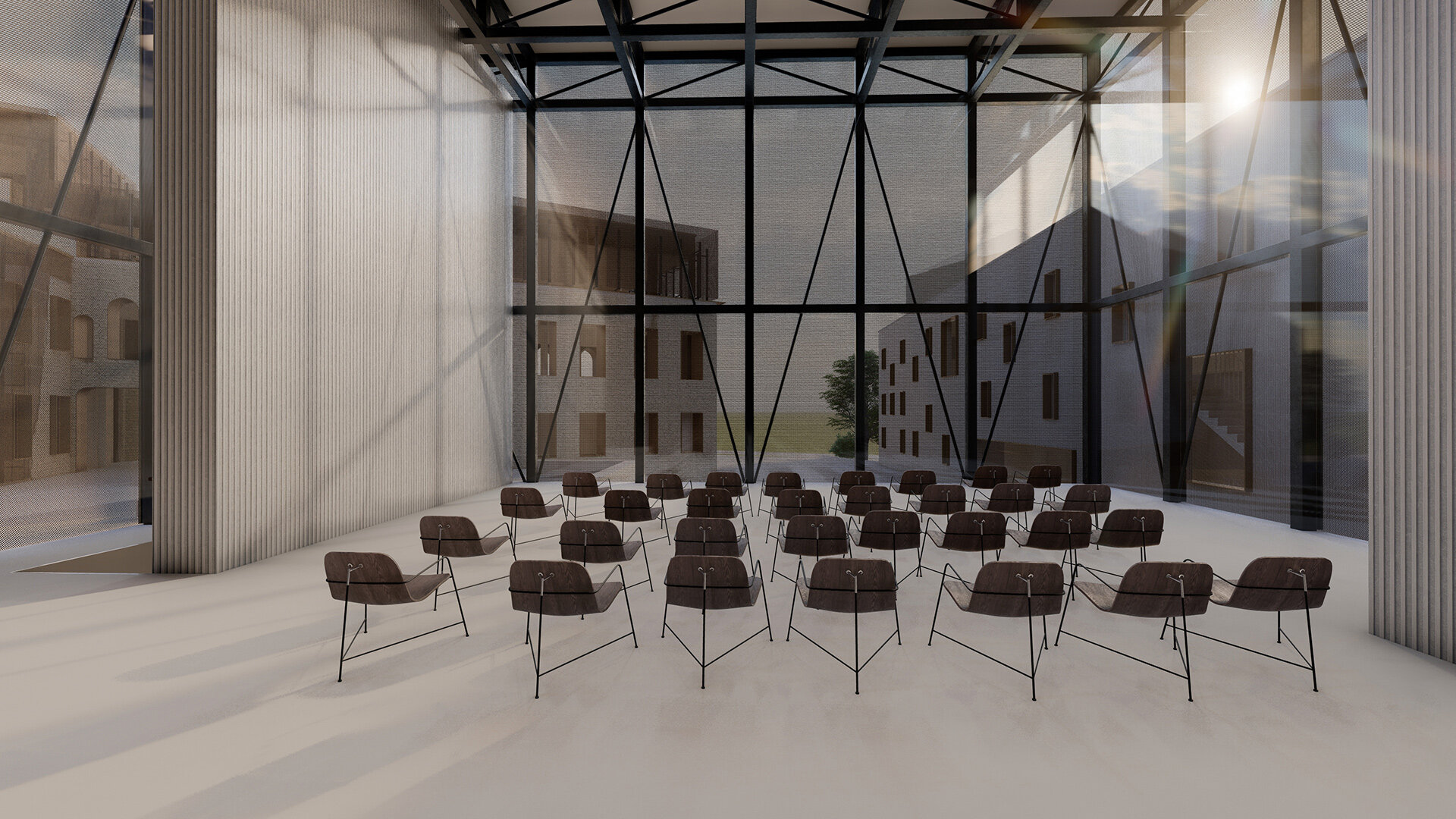 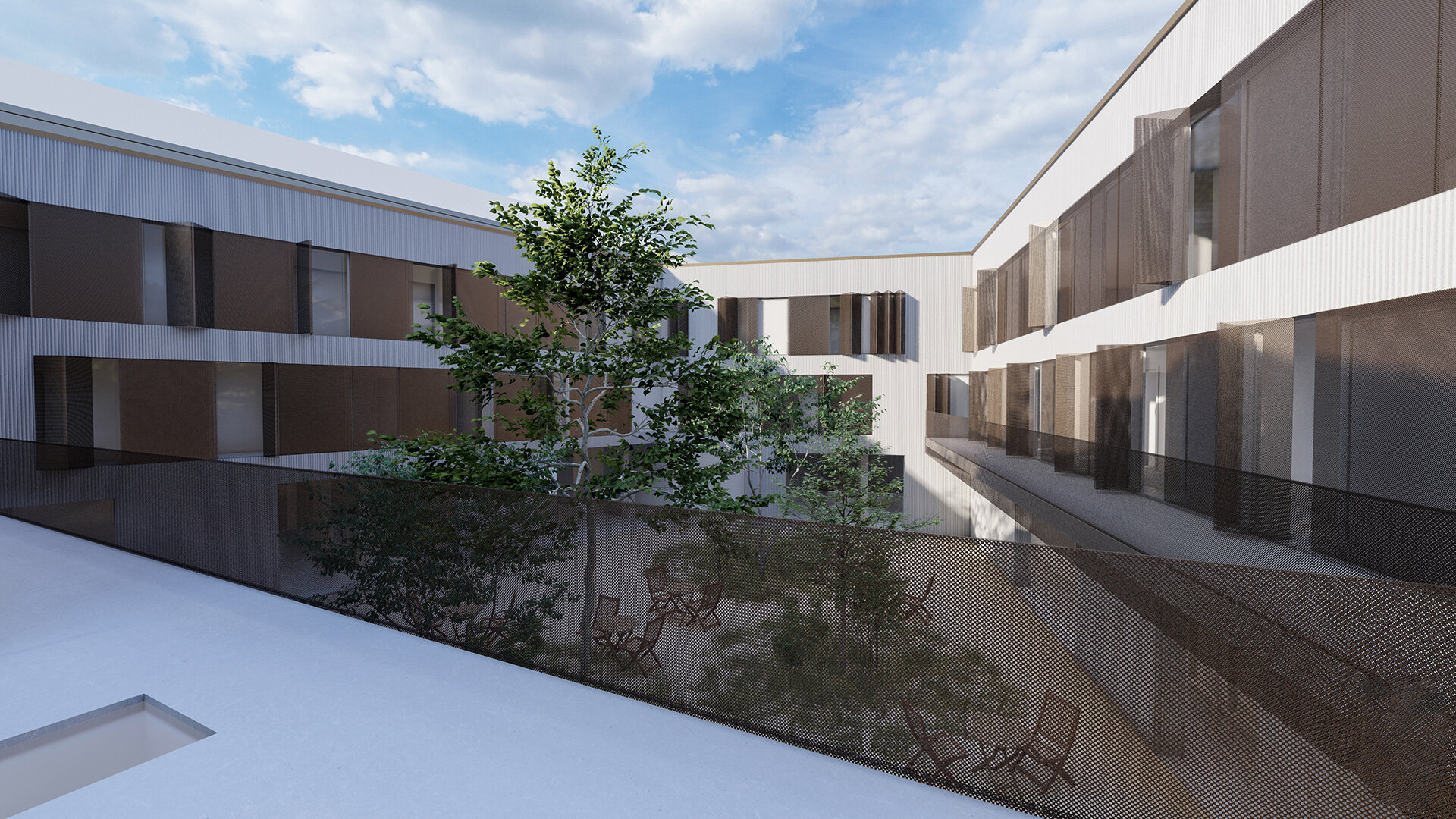 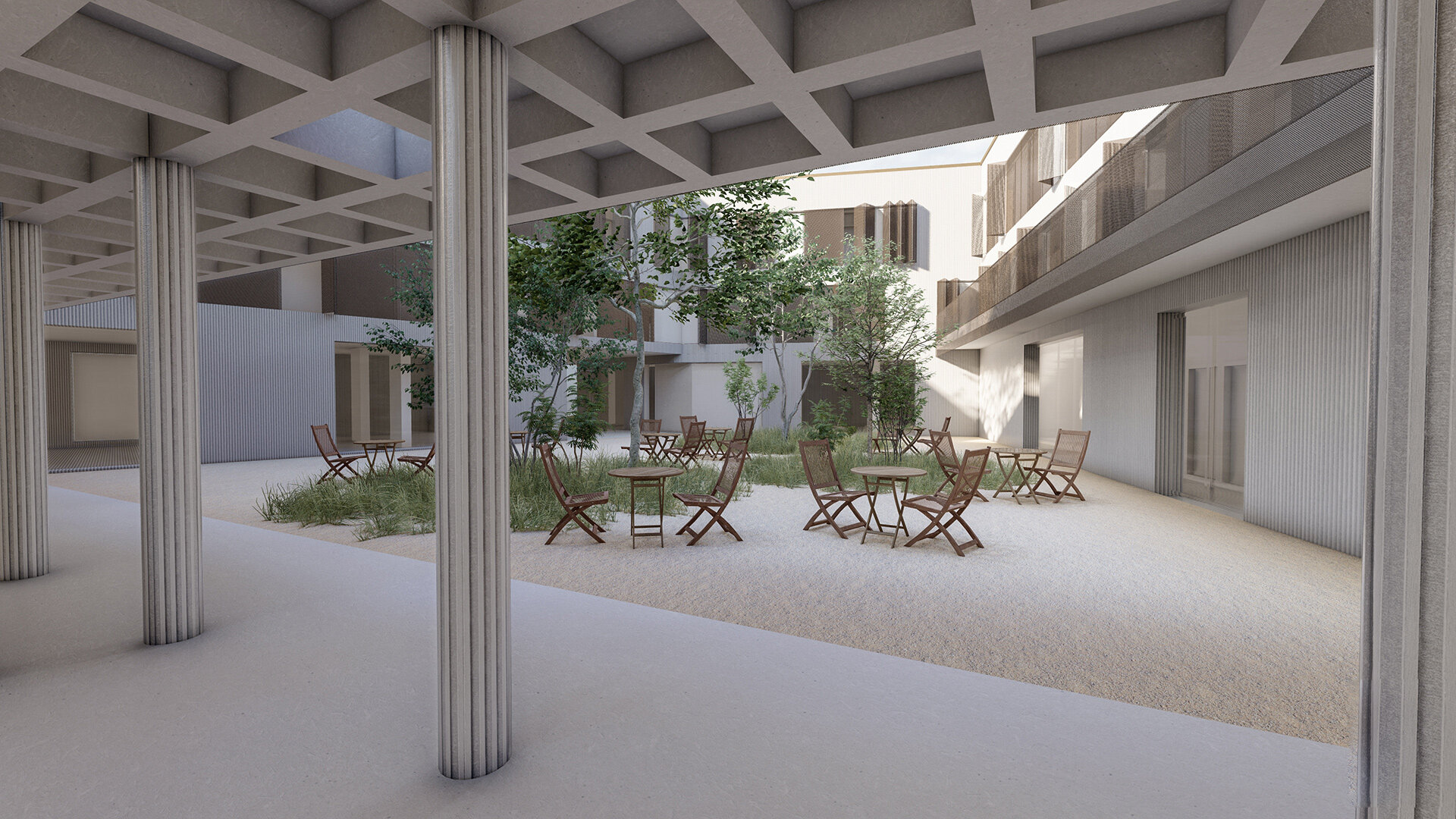 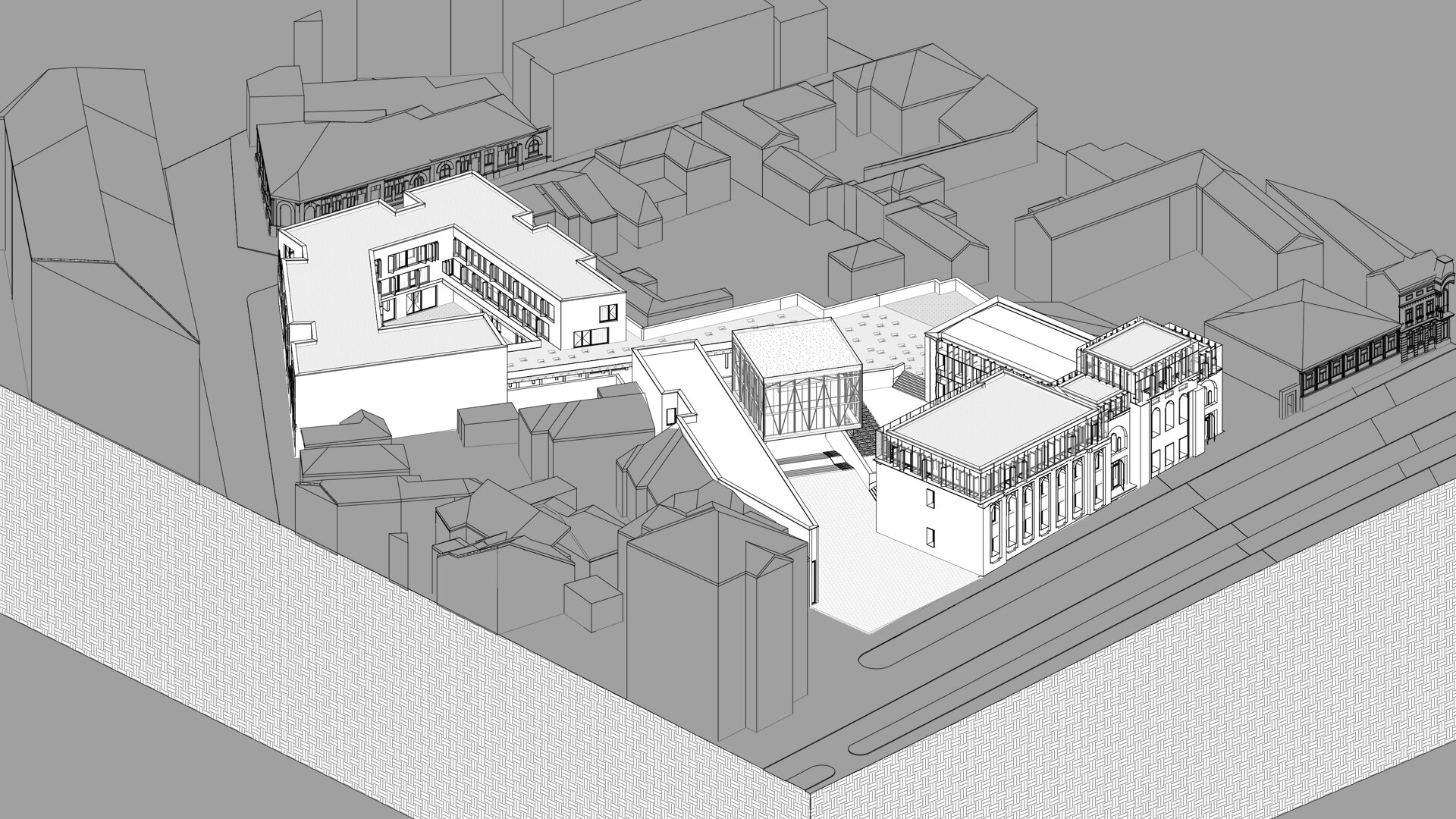 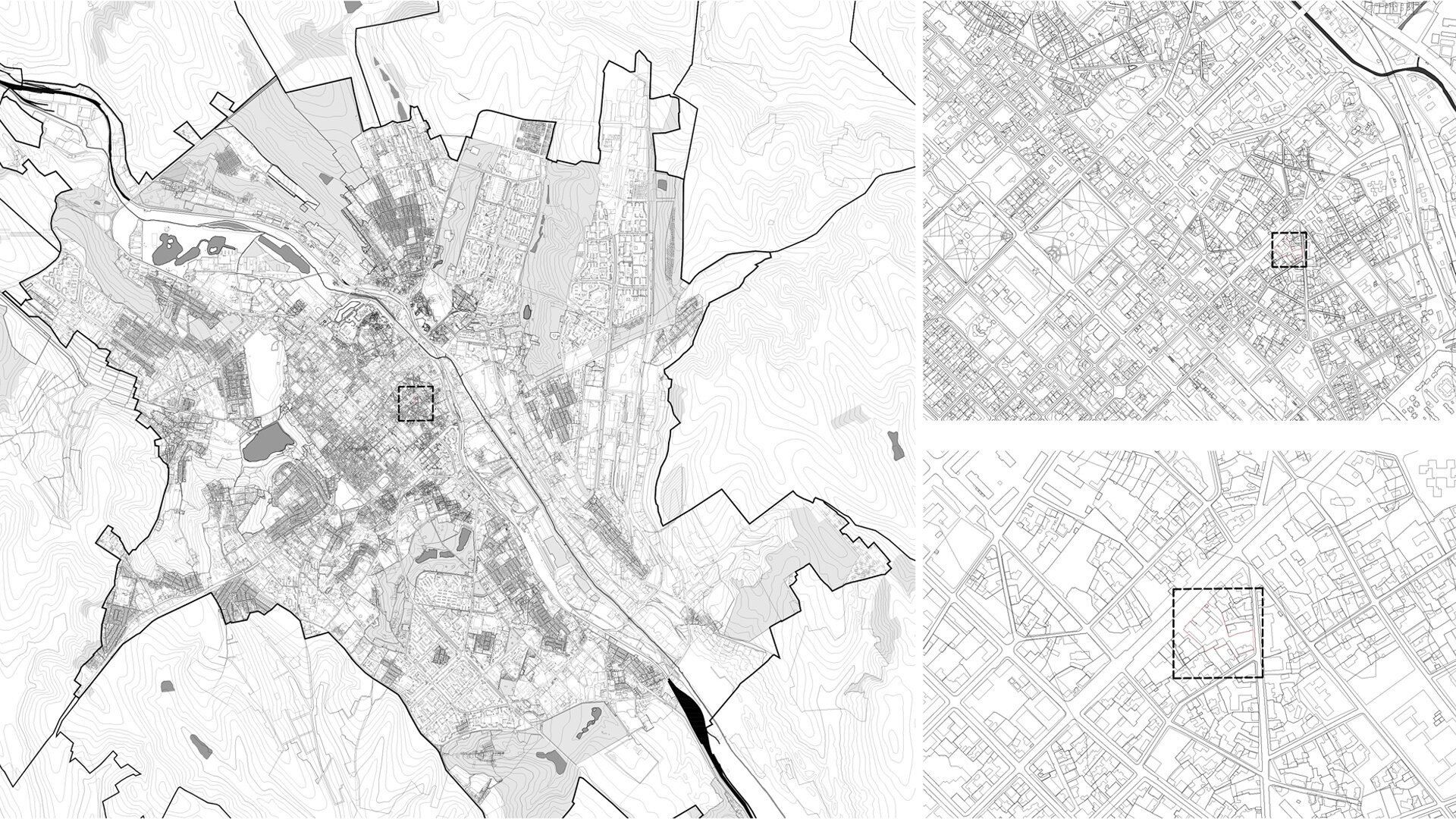 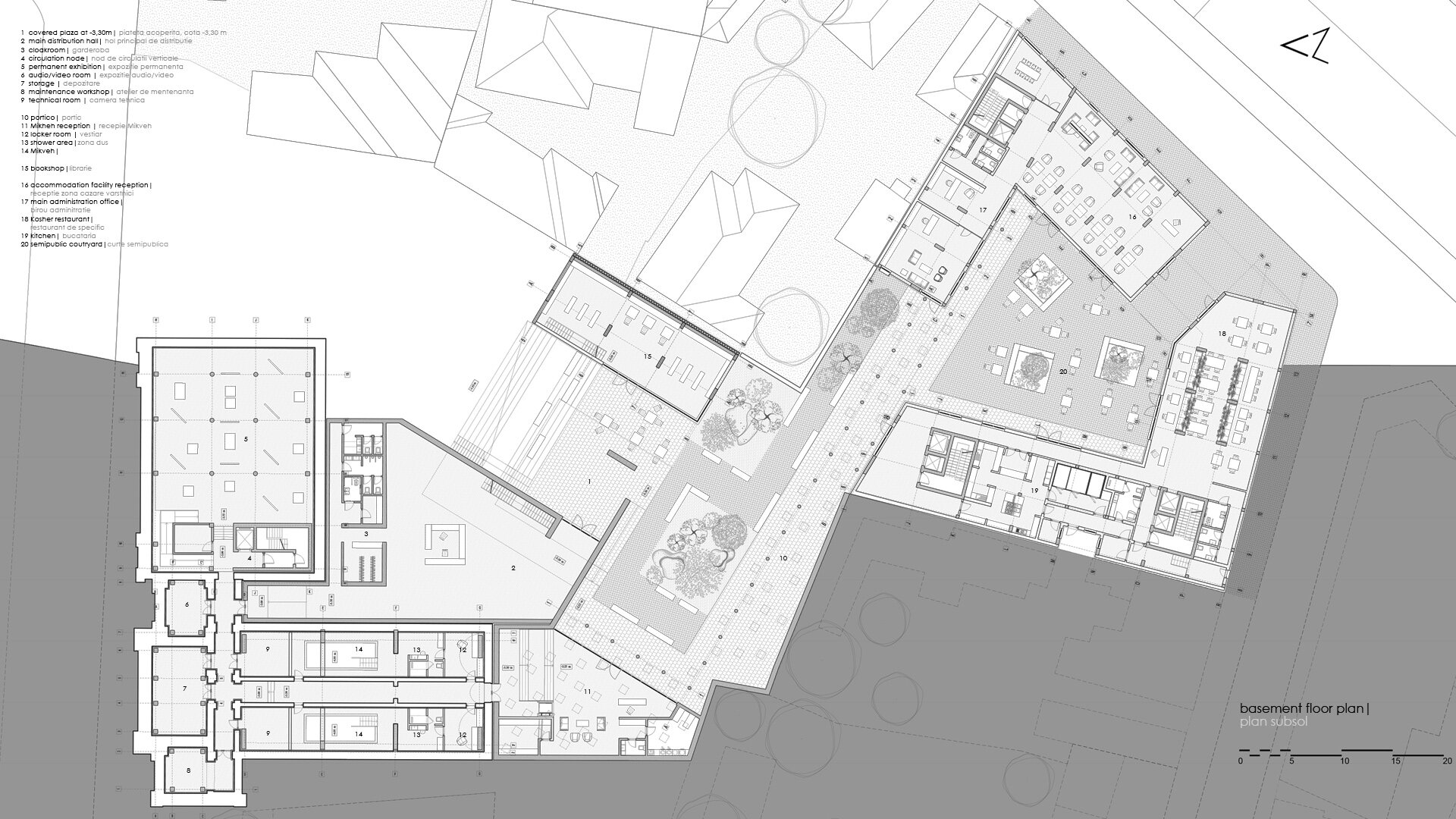 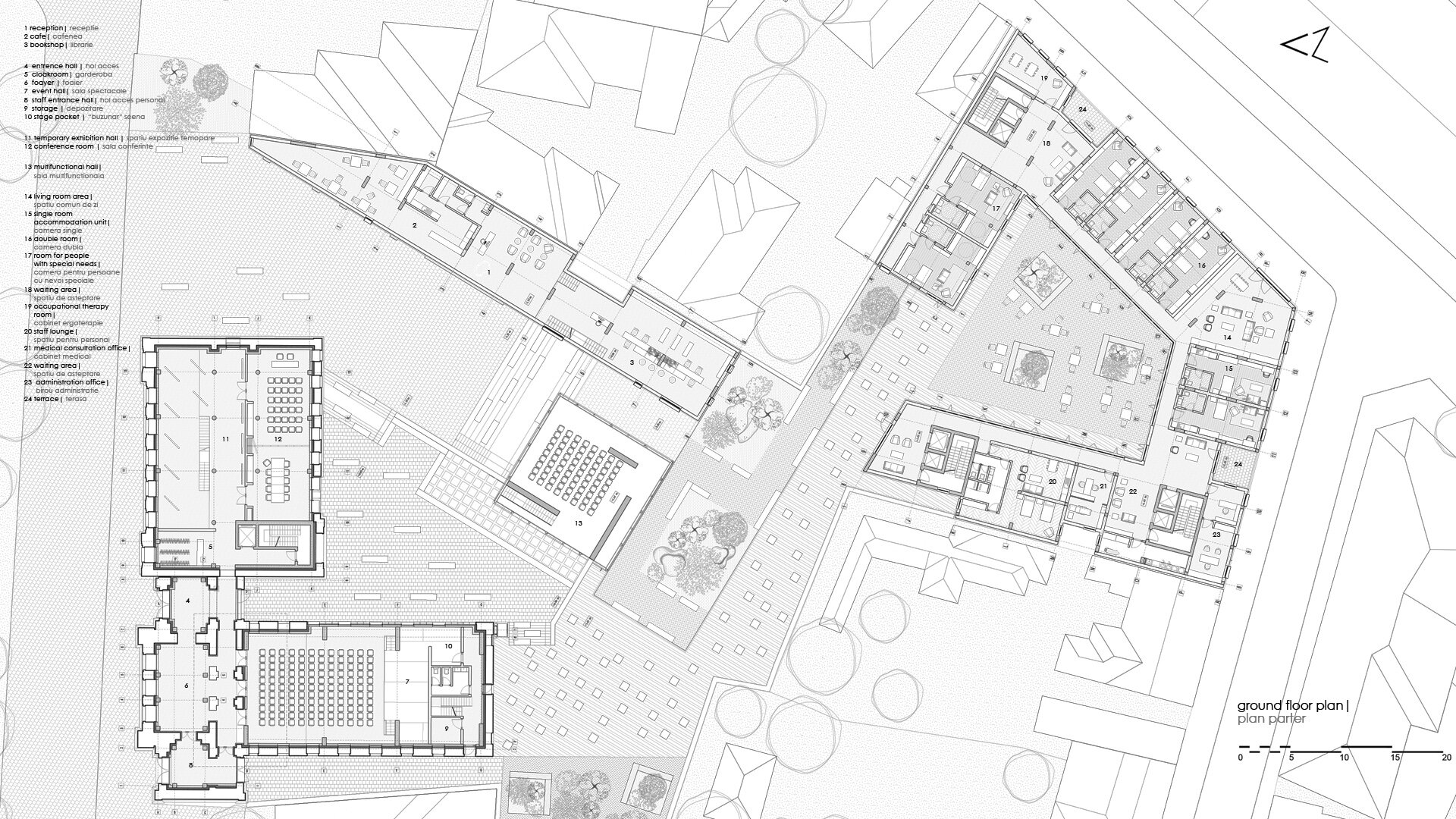 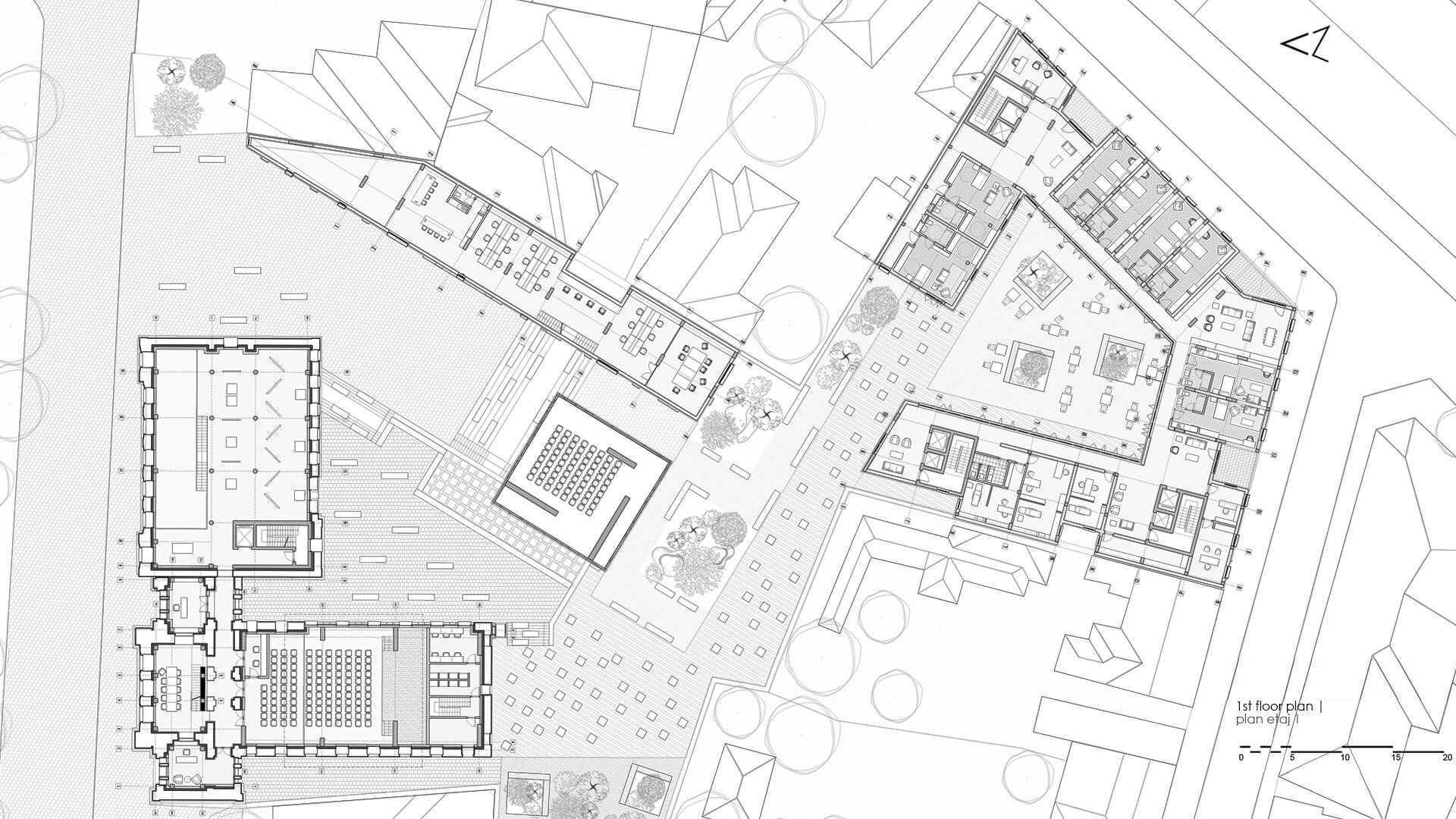 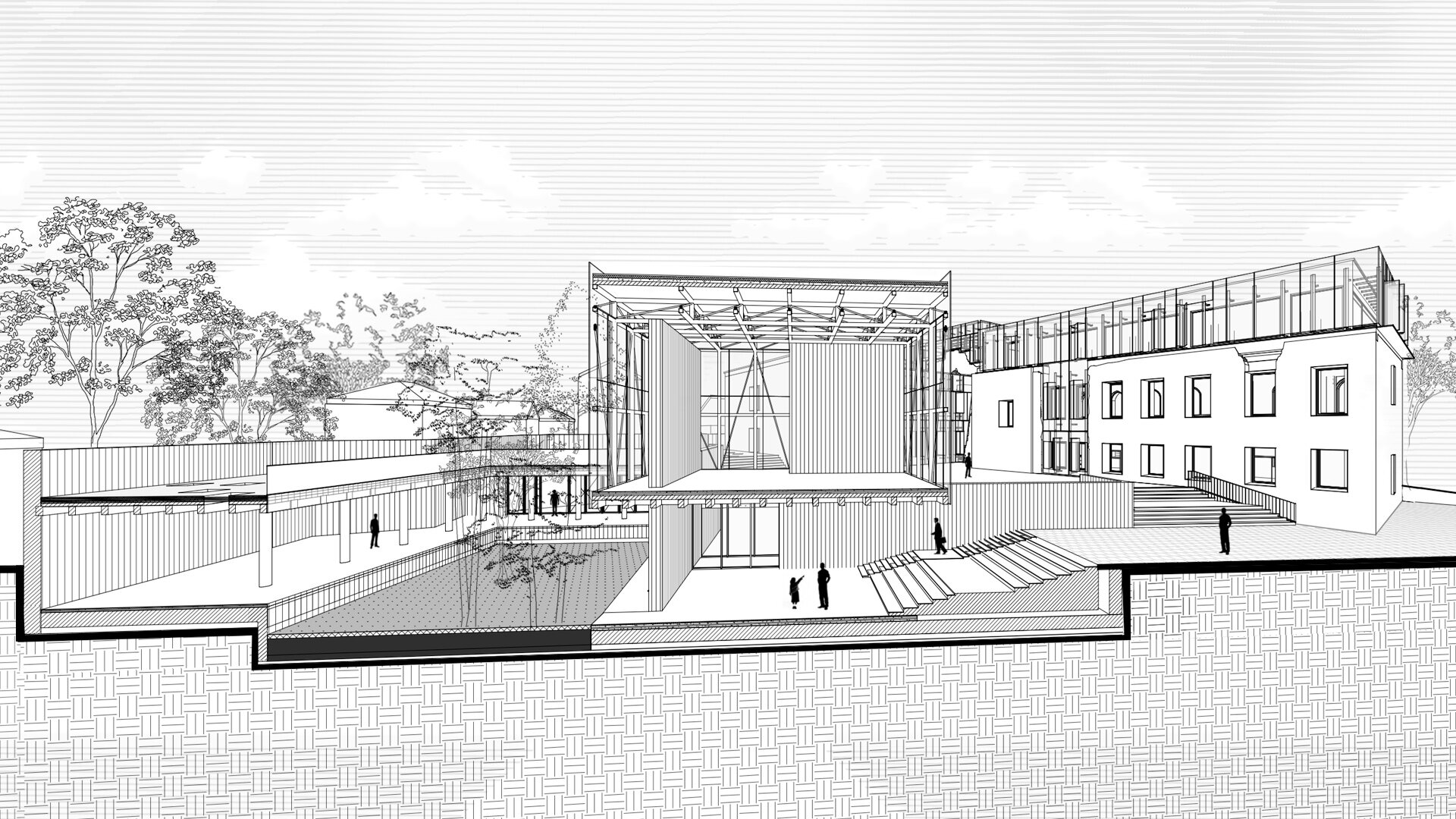 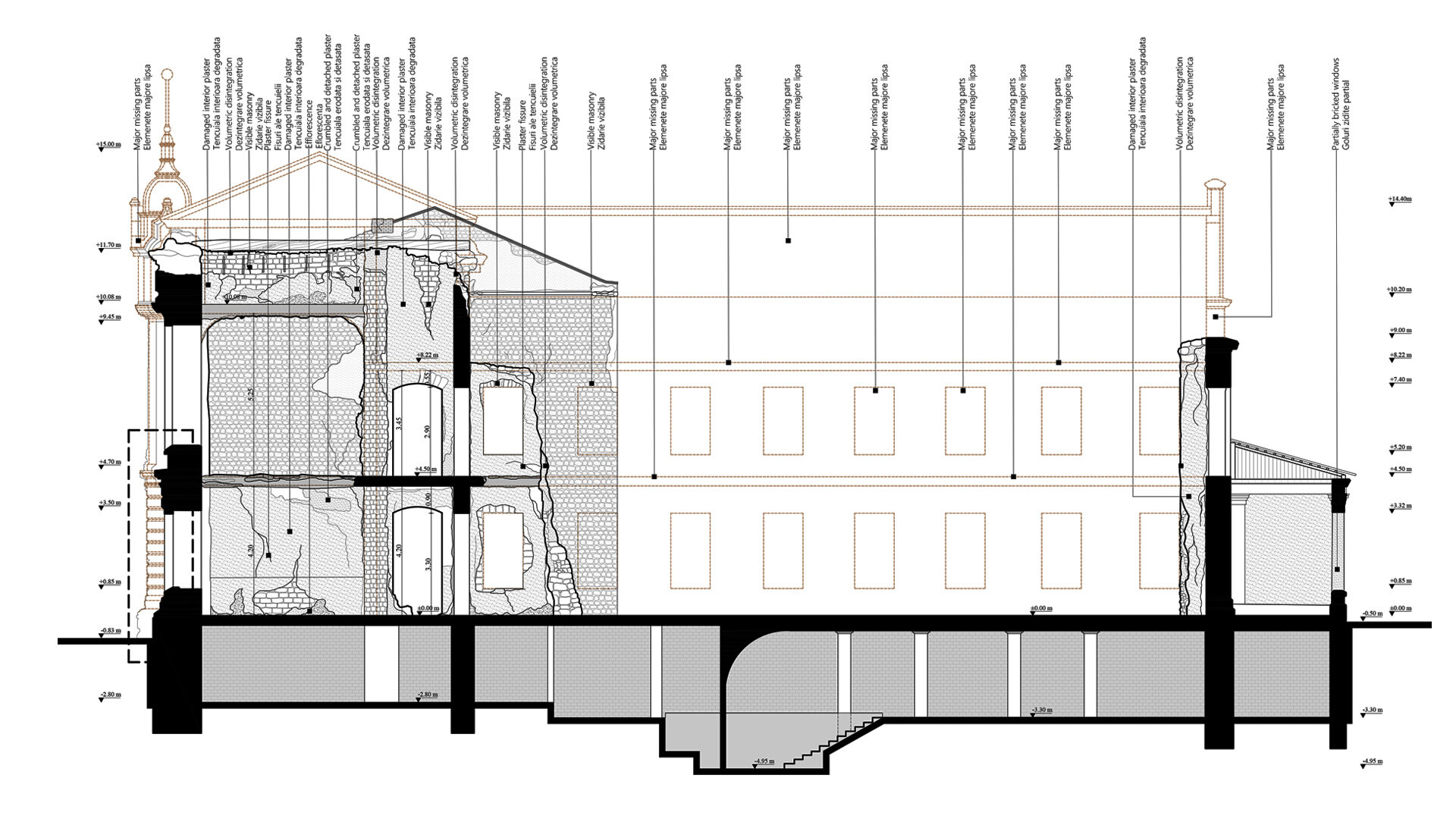 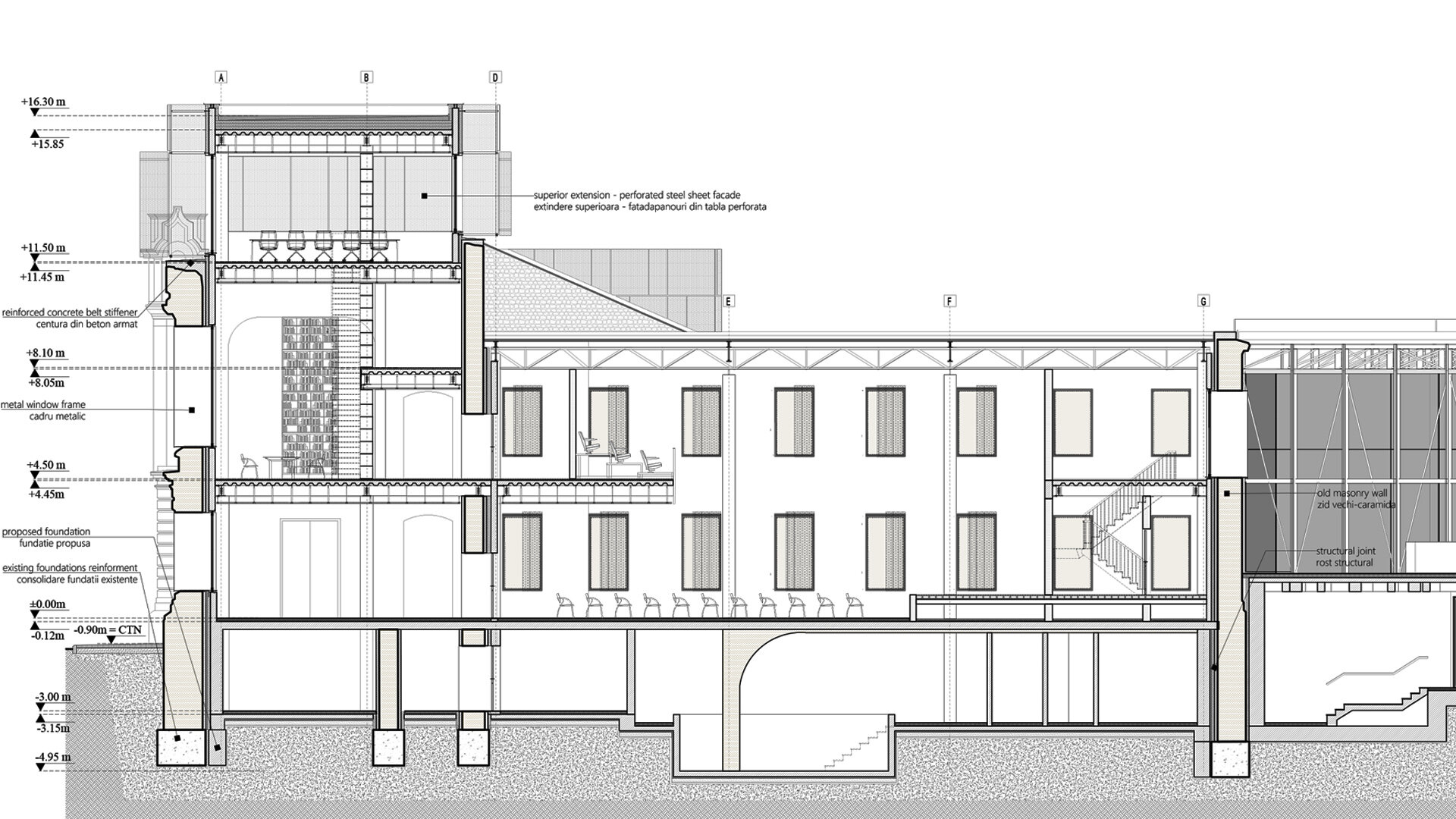 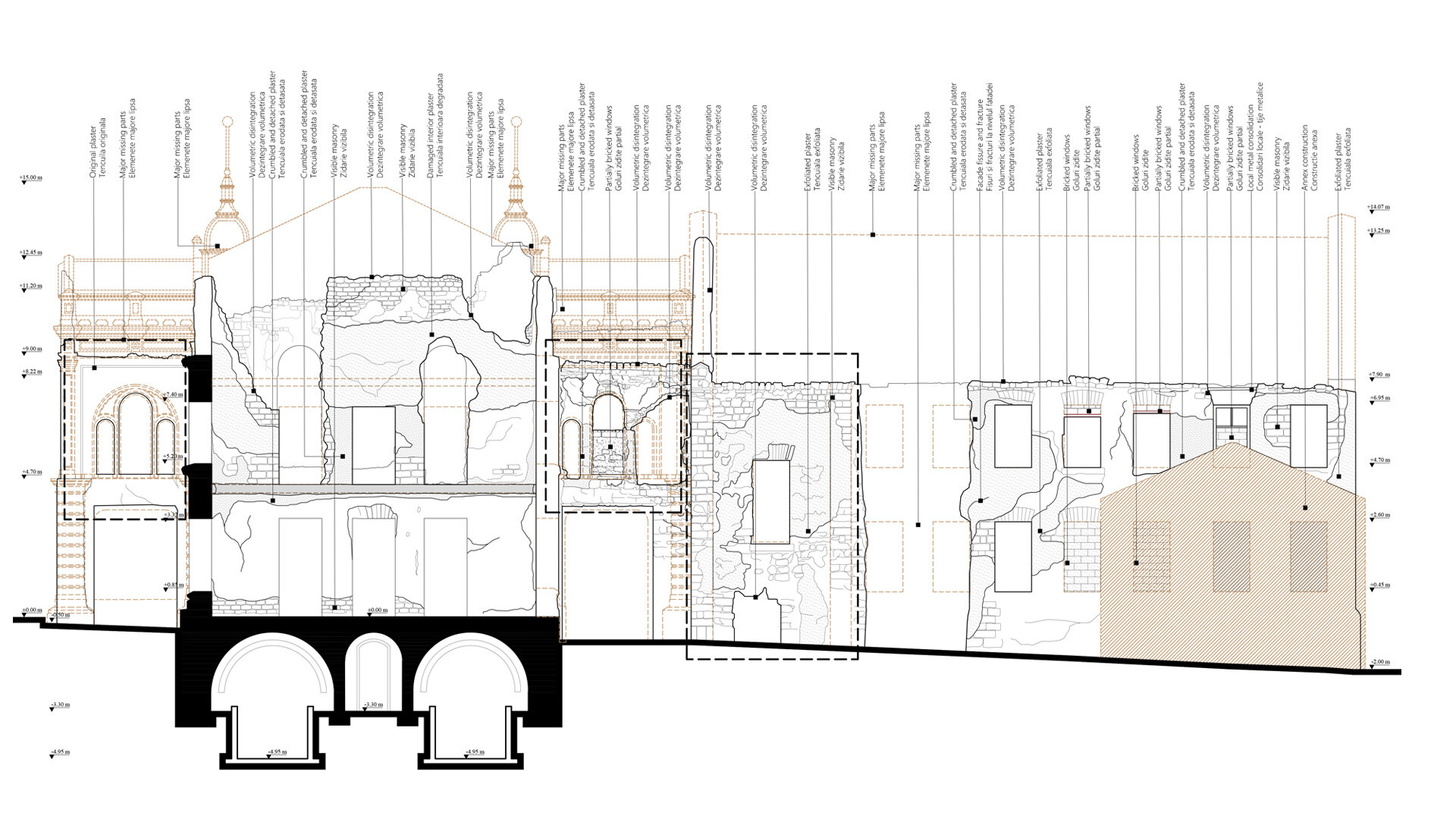 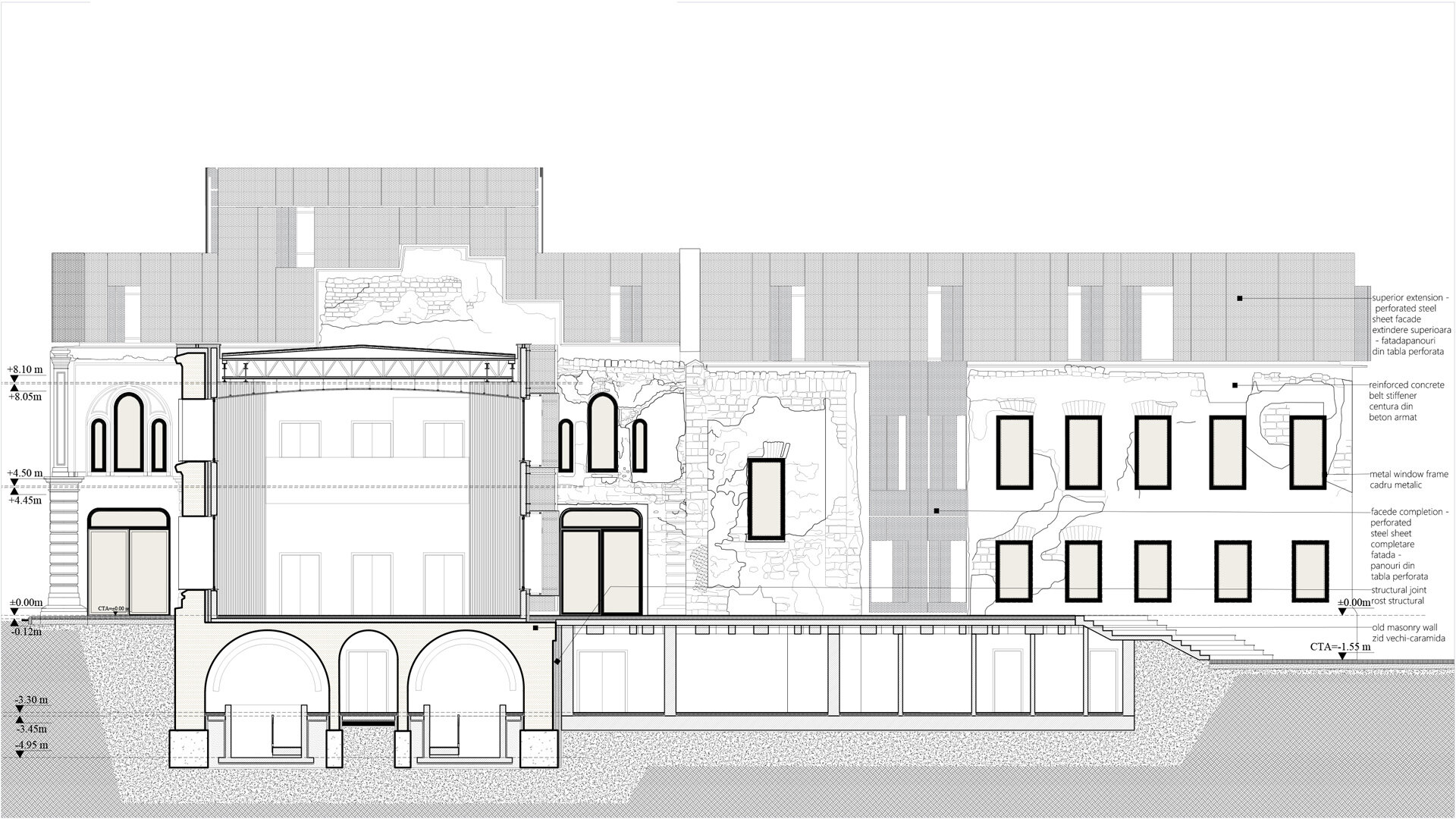 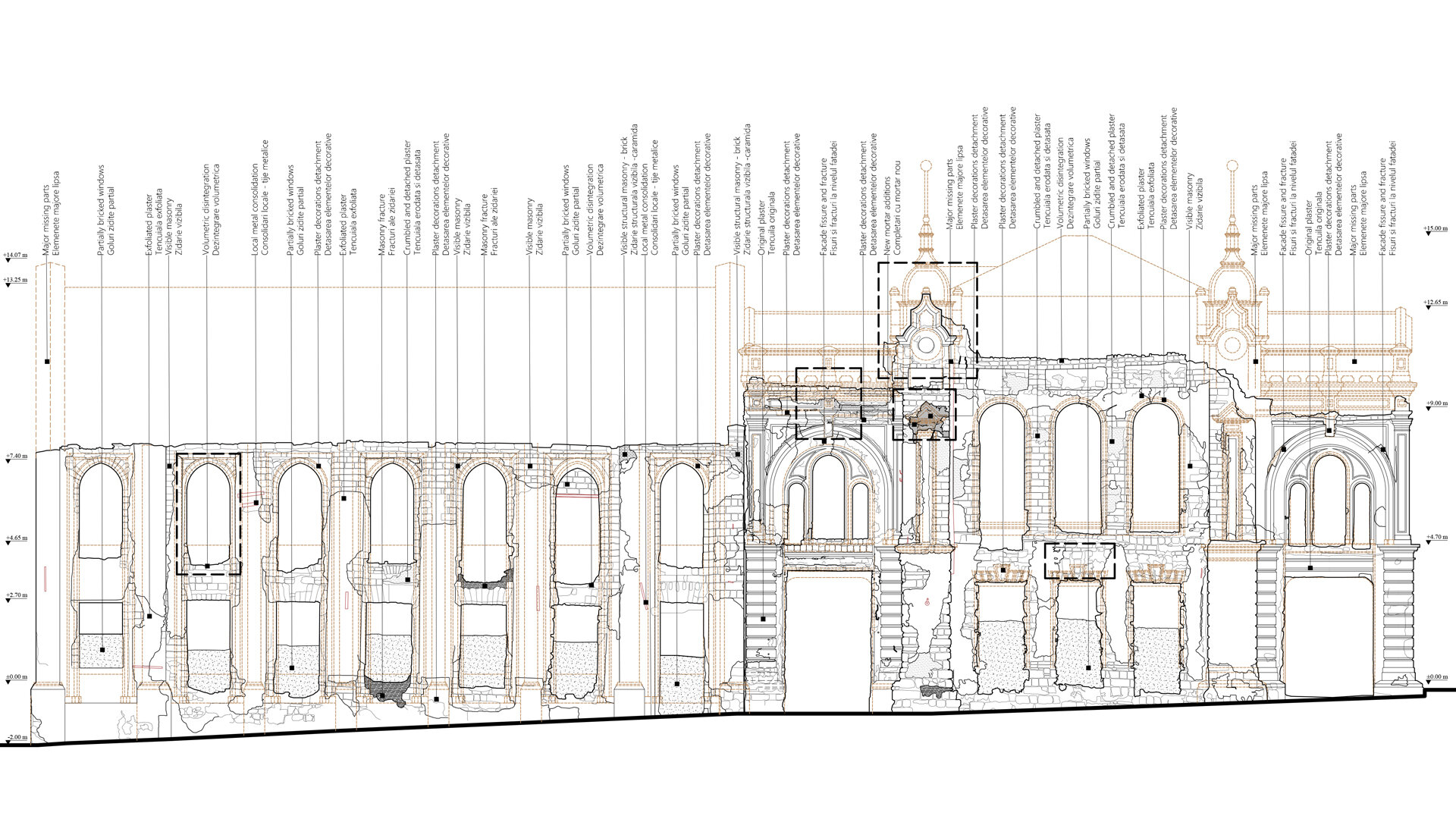 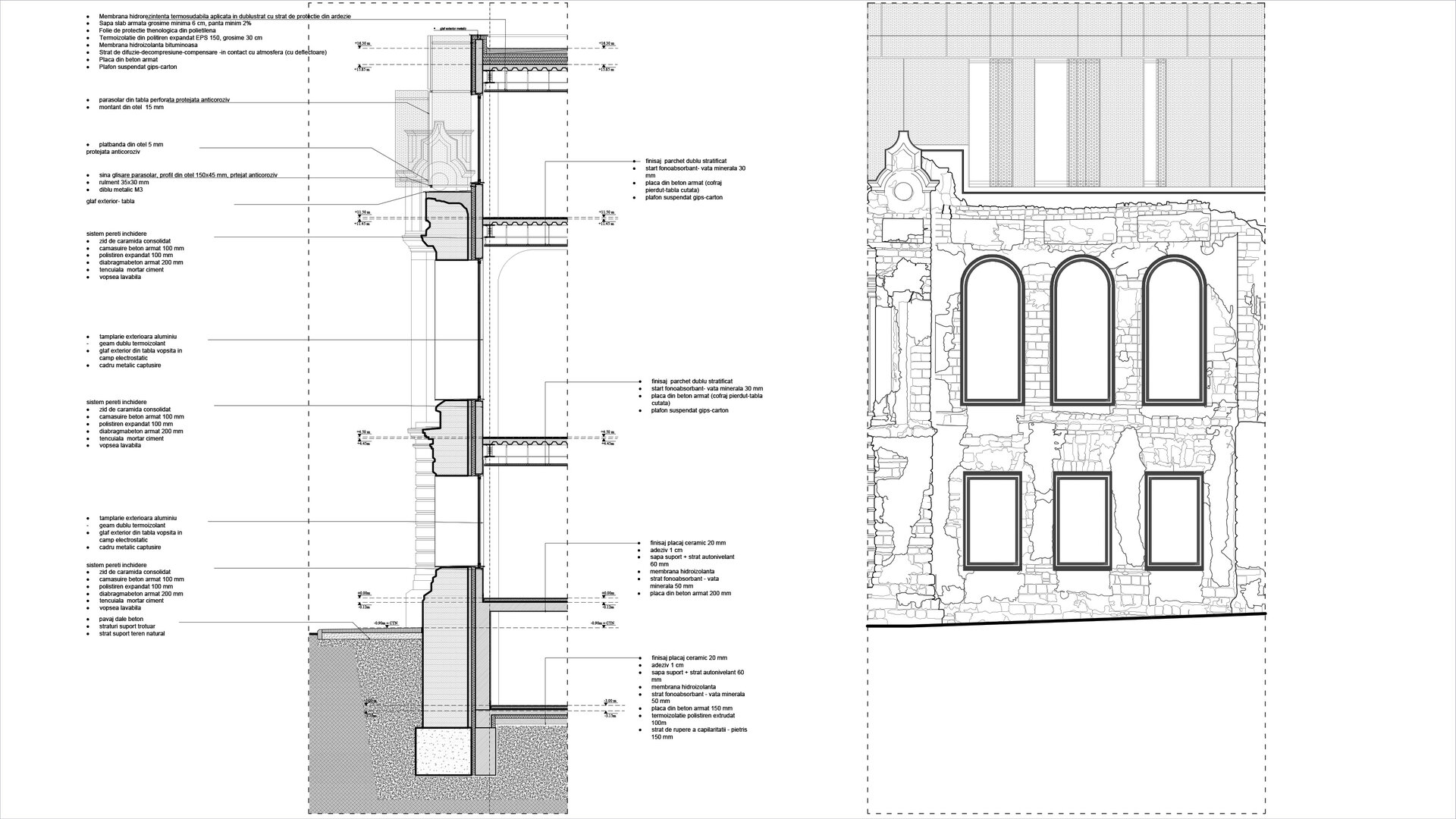