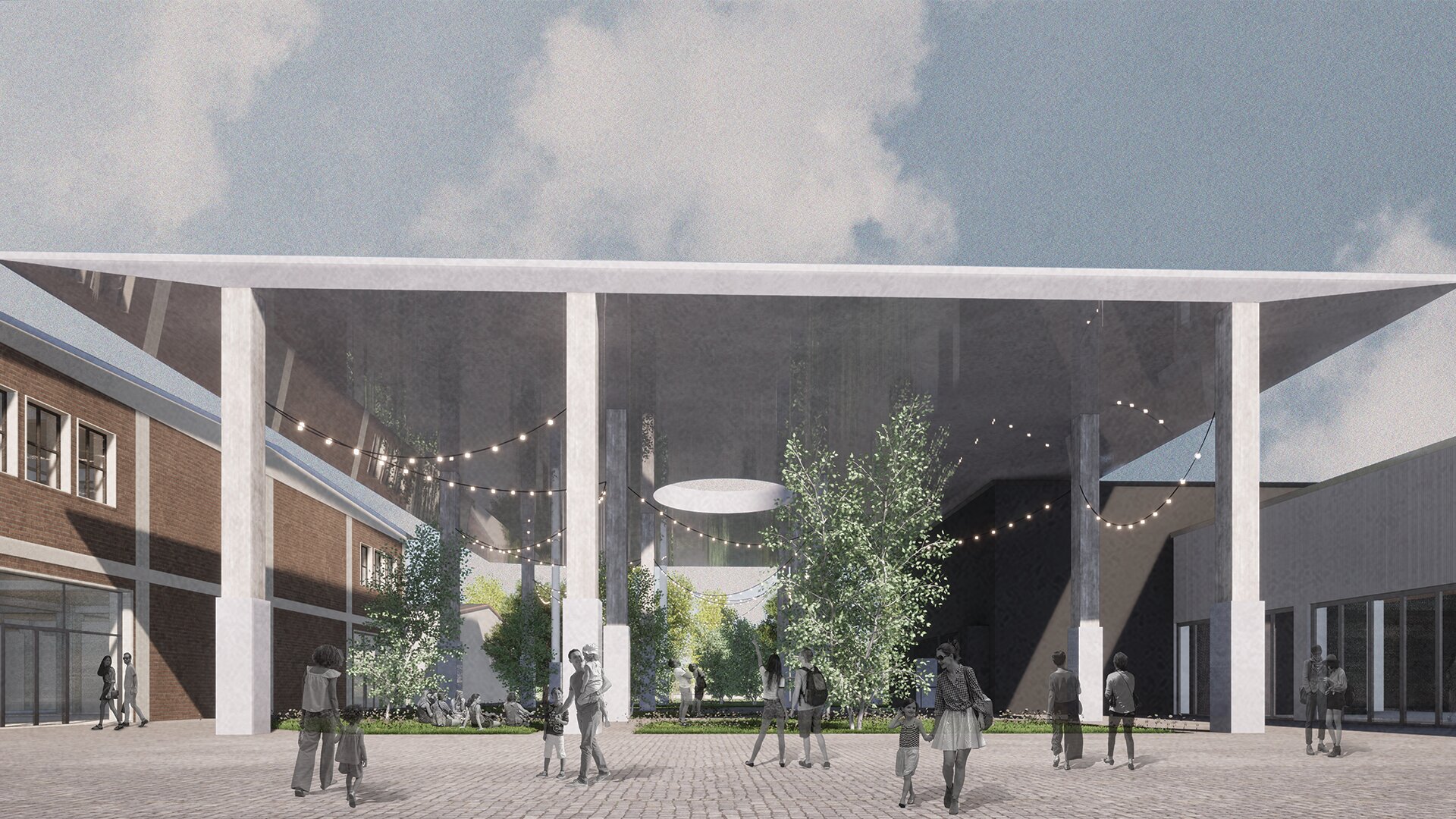 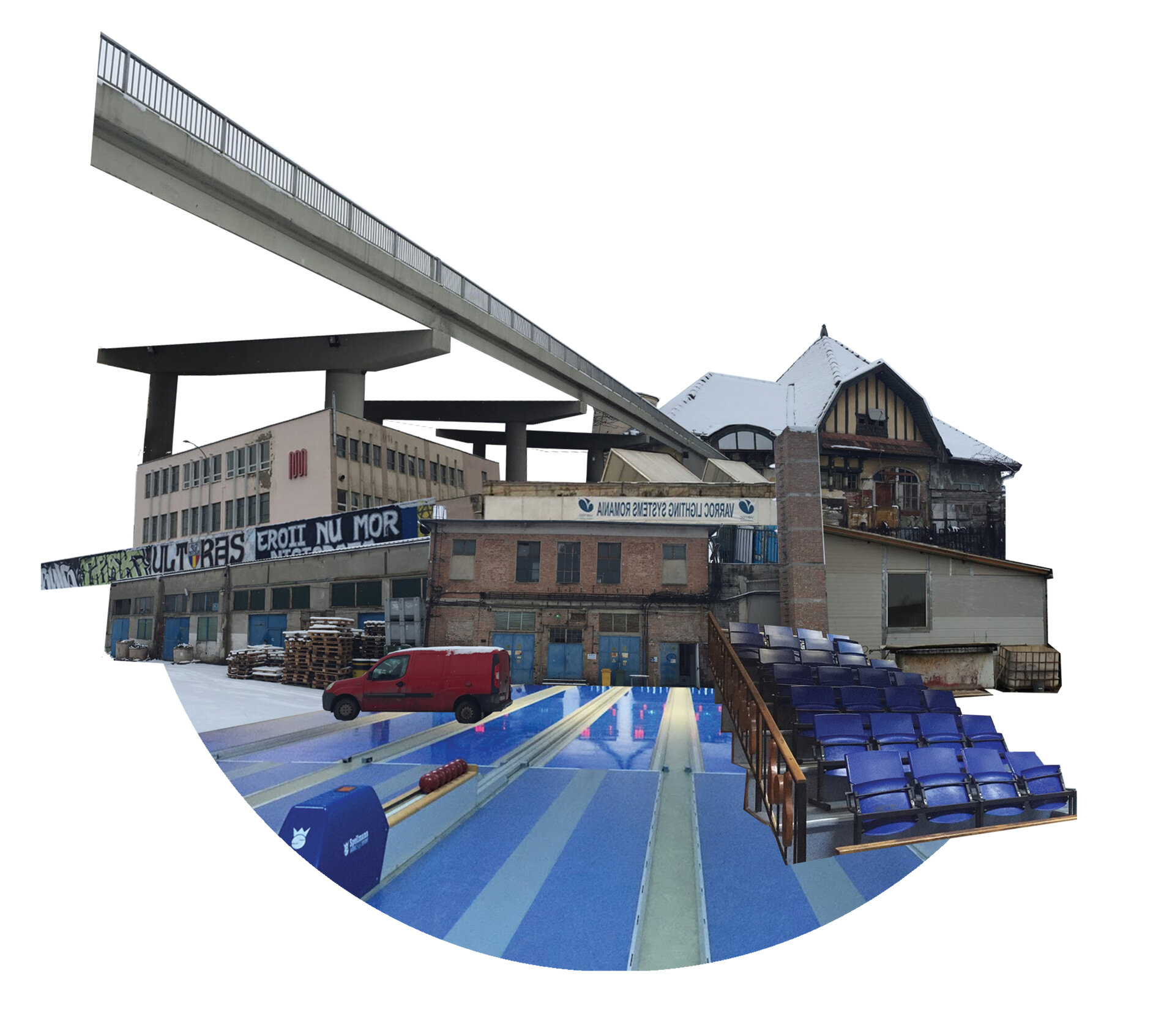 The city of Târgu Mureș has a limited offer of cultural spaces related to the size of the locality, the appetite for cultural activities and the status of urban development pole. The cultural spaces are composed of classical spaces of the Italian theater type, which are not suitable for other kinds of performances. Through this program I would like to bring together the small cultural and artistic formations in the city, which currently hold their activities in inappropriate and improvised spaces and to offer them a stable interdisciplinary space.
The site is located between 2 waters, the Mureș River and the Mureș Turbine Canal, in the vicinity of an important traffic junction of the city, the bridge over the Mureș River, which articulates between the Unirii neighborhood and the rest of the city. The last defining element is the railway line, which creates a visual and physical barrier between the site and the waterfront.
Inspired by the Trans Europe Halles initiative, I proposed the restructuring of an underused industrial site, full of infrastructure and ruined buildings. The “Krafft” alcohol factory was located on this site until the end of the 19th century. In the middle of the 20th century, the workshops of the “Ciocanul” cooperative appeared, which became the “Electromureș” enterprise. Today, most of the buildings are in an advanced state of degradation and do not have a remarkable architectural quality. In order to enhance the public space, worthless buildings and warehouses are proposed for demolition, which according to the analyzes have become inadequate.
At the moment there are no possibilities to access the site for the public, as it is surrounded by a wall, with punctual accesses. My proposal preserves some of the existing buildings. According to the analysis of the typologies, it appears that they could house other functions related to the program. A new building is proposed, predominantly for the activity of the theater, which closes the specific comb-shape of the industrial complex and a main mineral courtyard is formed in front and a more organic and sheltered one in the back.
La Mezquita in Corbdoba, Spain is a perfect example of the continuation of the load-bearing structure from the inside to the outside through natural elements.
The structural grid of the existing halls guided me in the arrangement of the site. I tried to mold the buildings and trees on it.
I proposed to open the site, demolishing the surrounding wall. The main access is from Călărașilor Street, entering the main square. According to a PUZ approved in 2013, it is desired to bury the railway line, thus creating new and more picturesque pedestrian accesses.
Thus, at the site level, a functional symbiosis is formed between creation (workshops) and art exhibition (gallery, theater), education (library extension) and recreation (club, outdoor spaces), connected by different spaces for circulation and socialization.
The structural concept starts from the proportion of the existing halls, which follow a 6x6 m grid. We reimagined the reinforced concrete halls in a more modern form, with more ergonomic materials. In order to follow a more ecological perspective, I wanted to avoid concrete as much as possible, so I opted for the use of metal to achieve the above-ground structure. Given the characteristics of the metal, it is easy to assemble and disassemble, with the possibility of expansion, so it is always unfinished and constantly changing as industrial complexes in general. 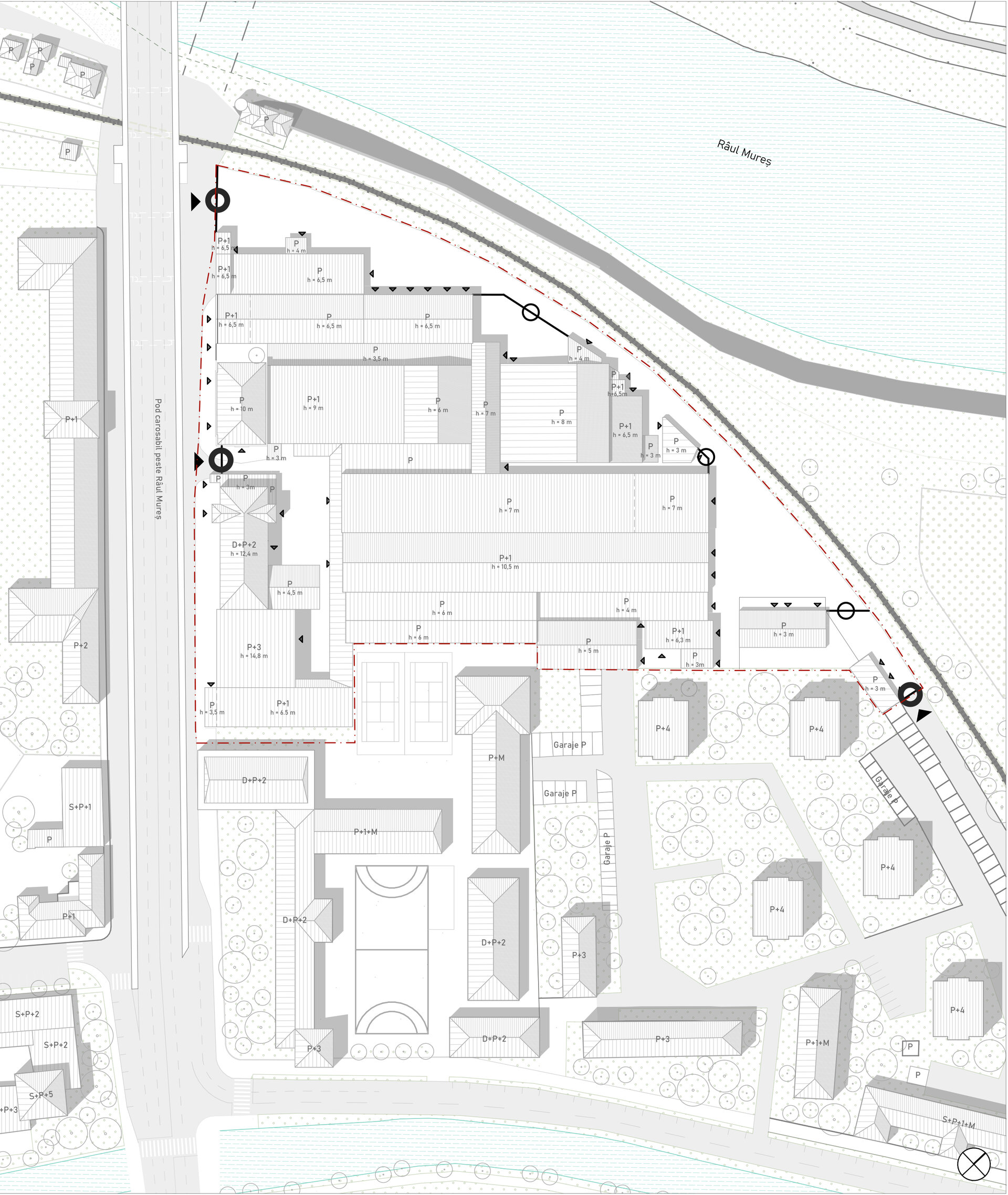 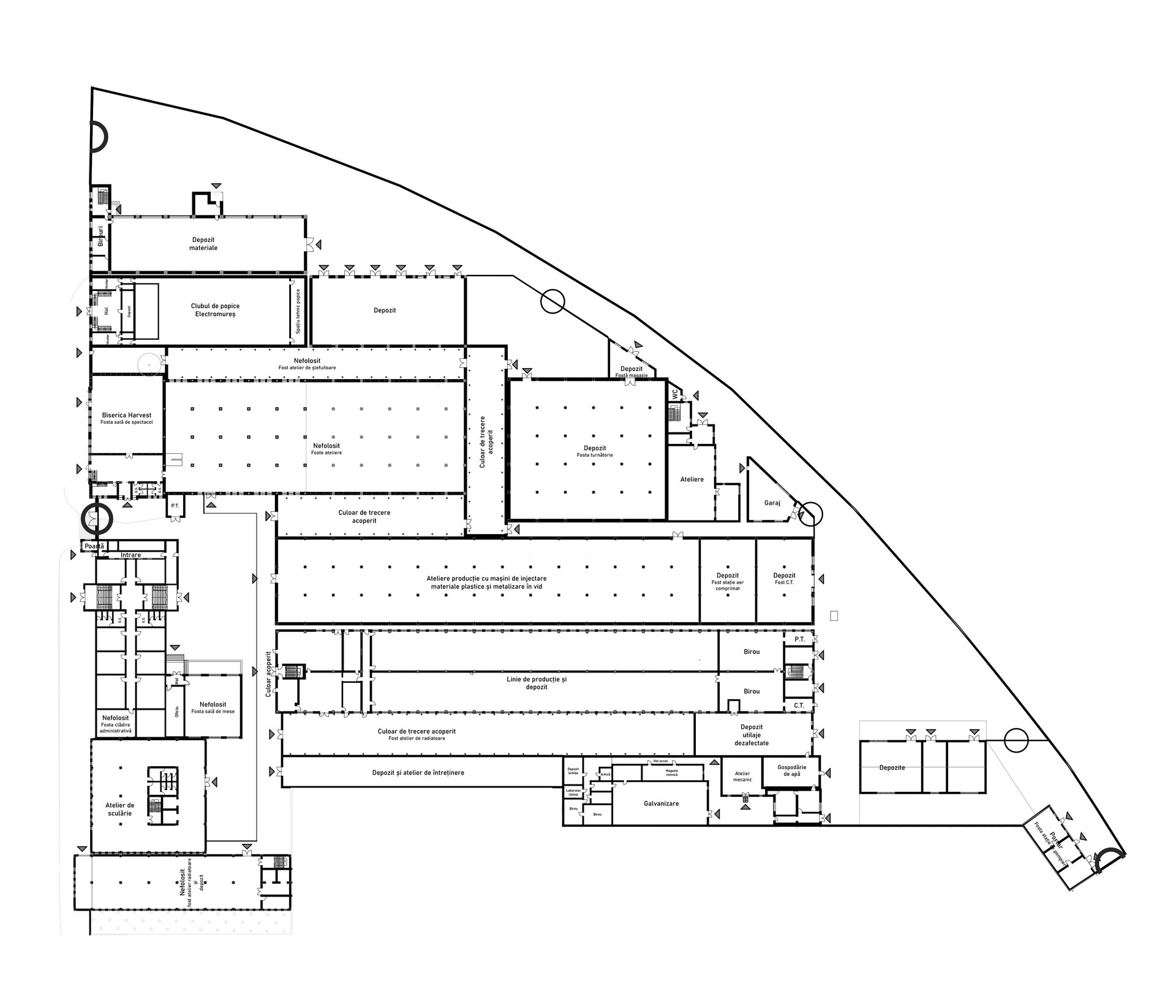 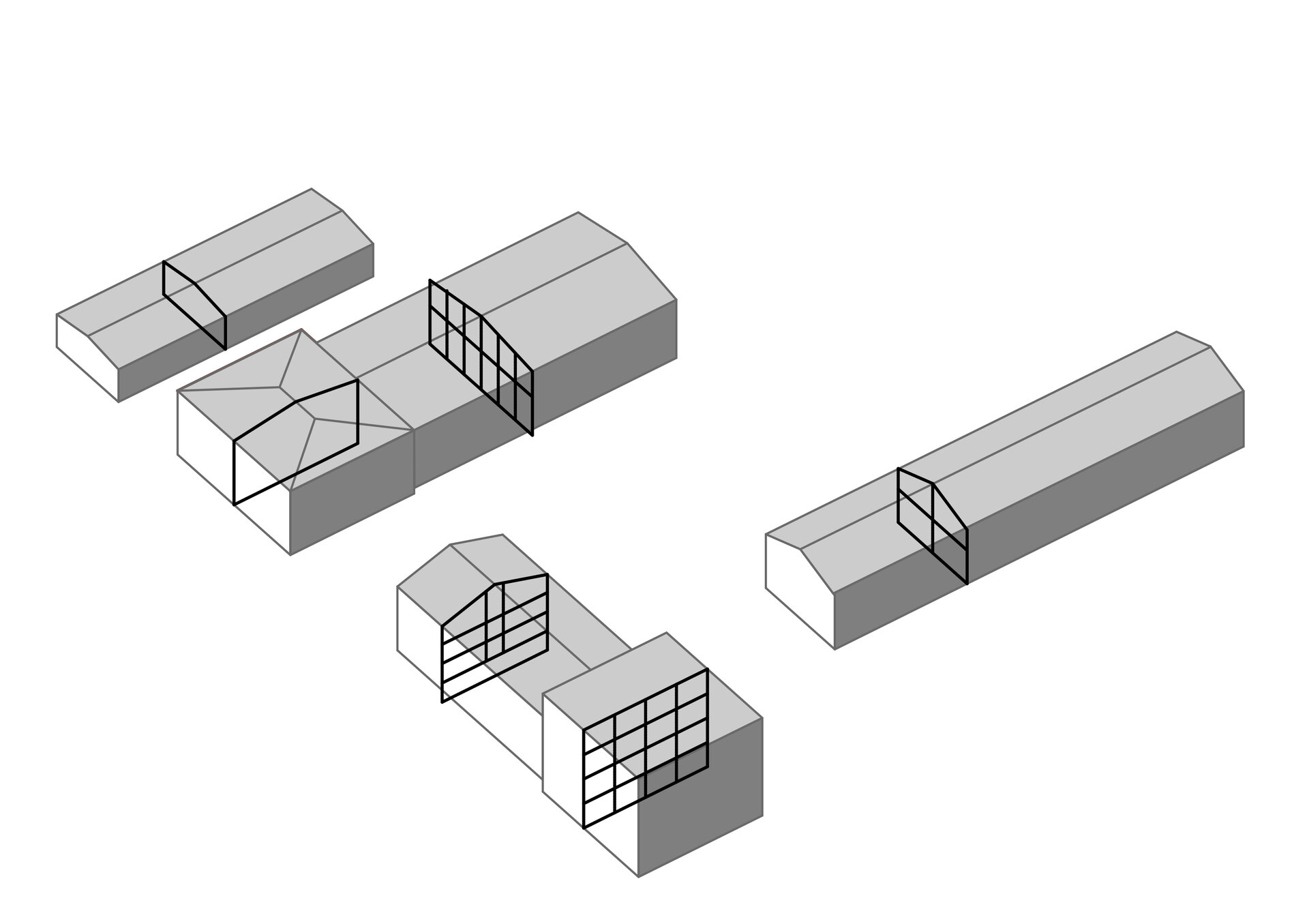 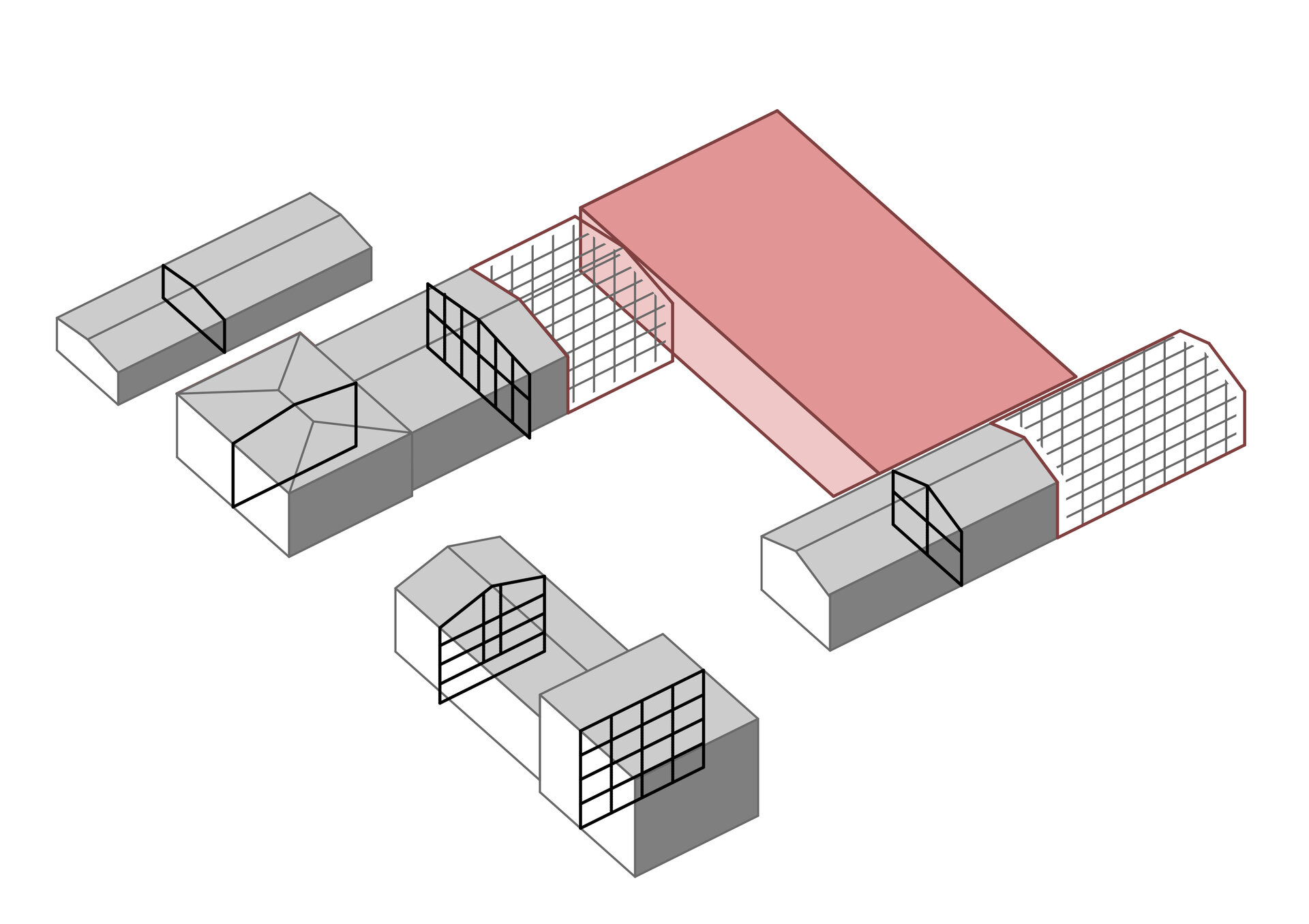 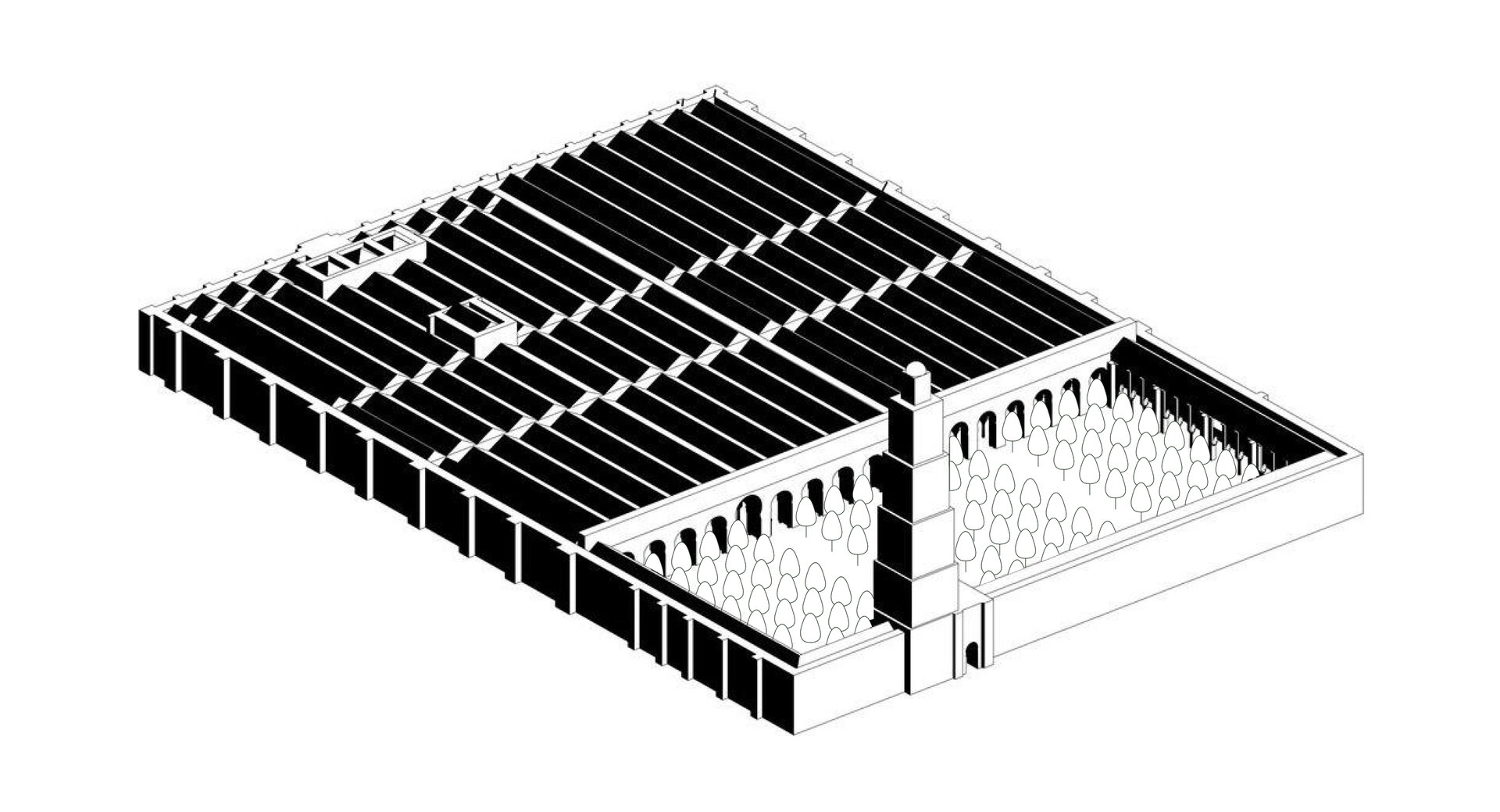 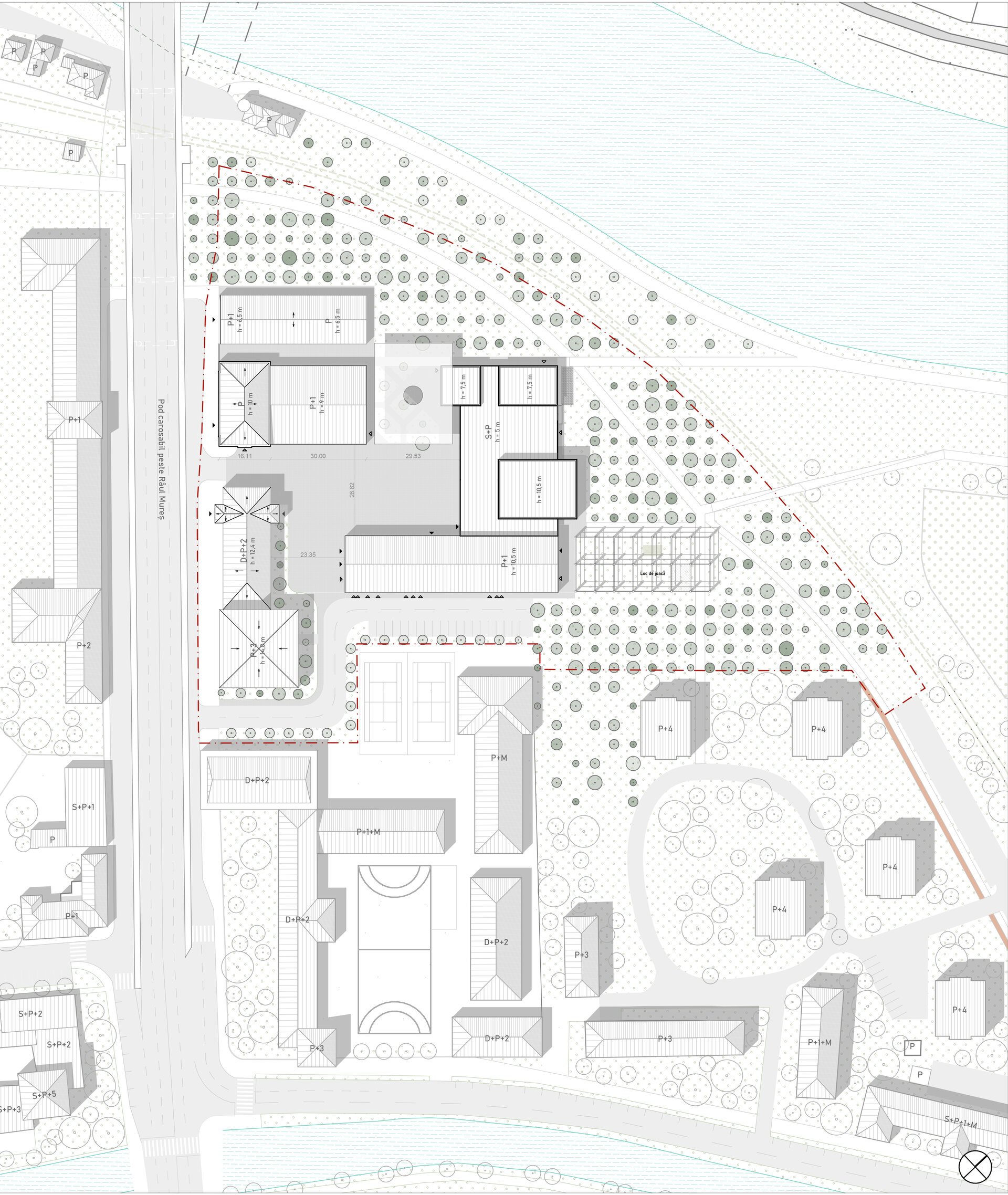 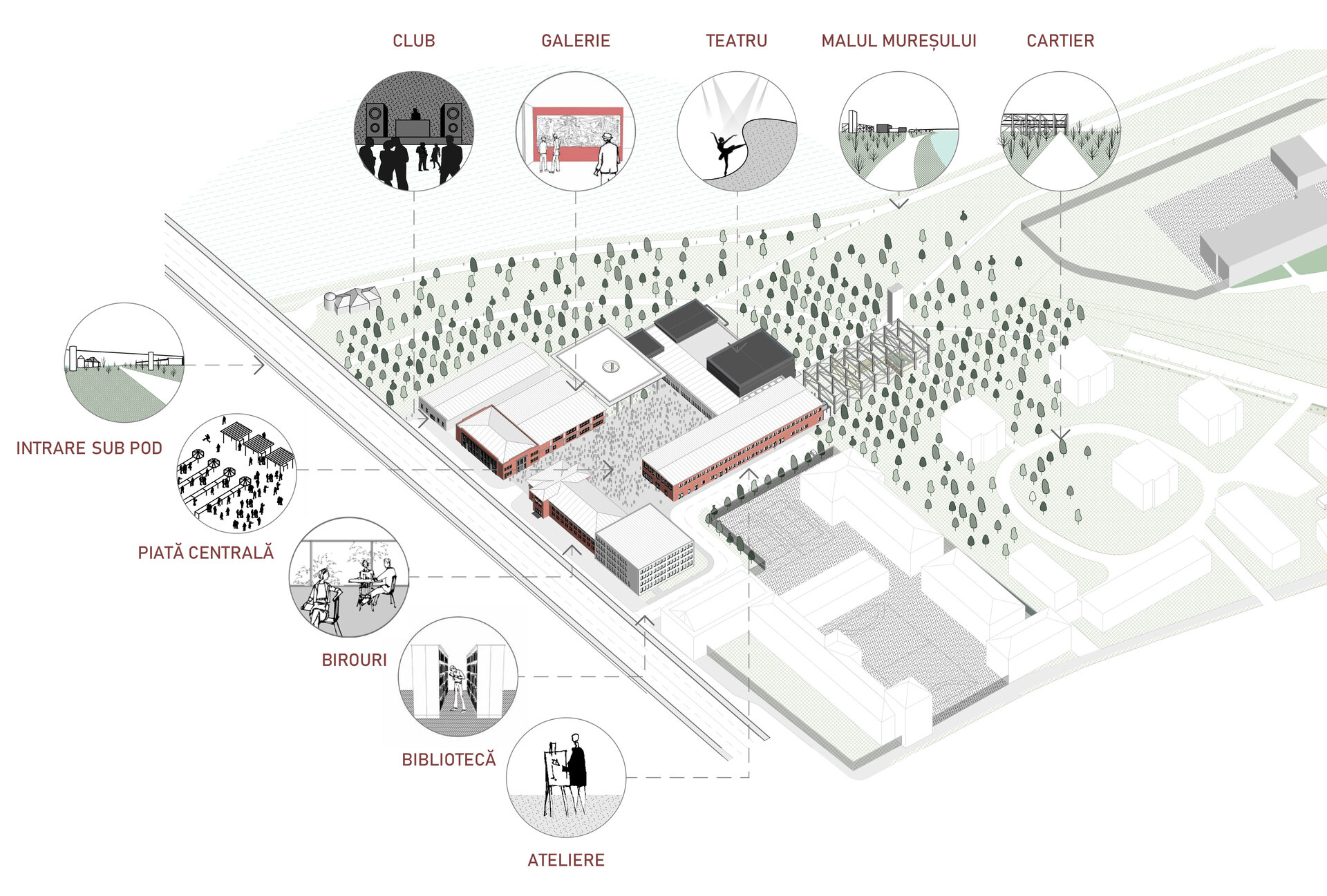 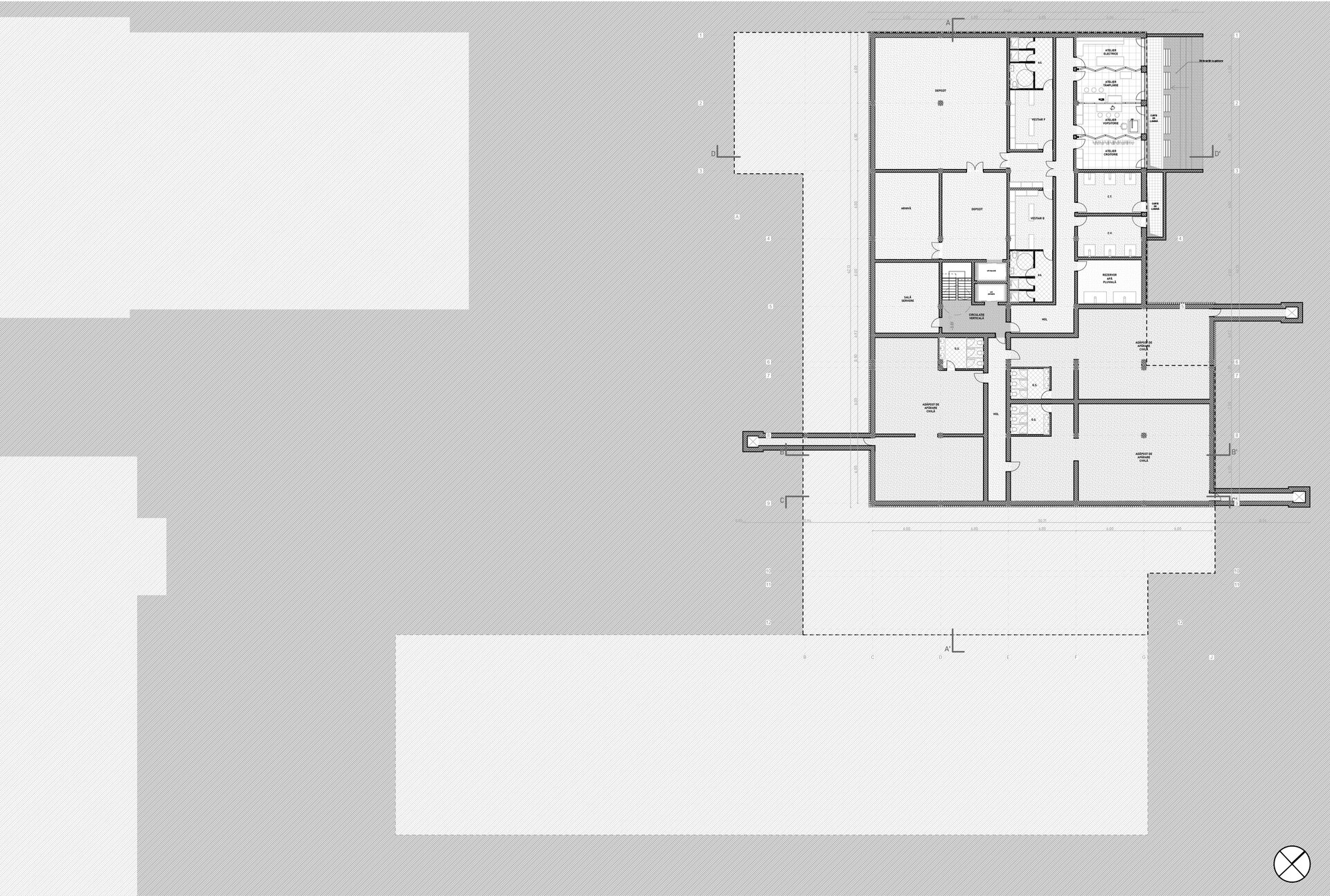 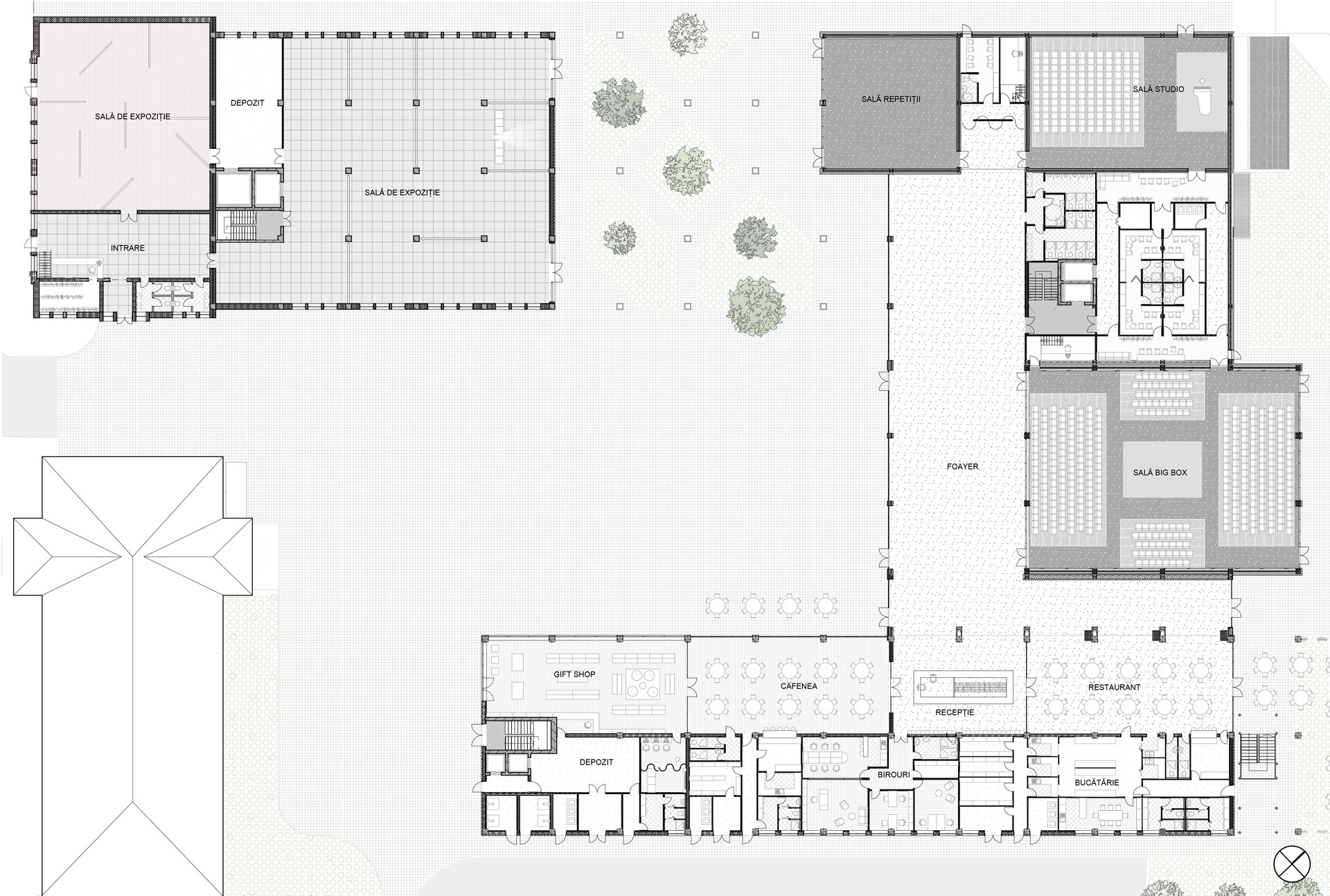 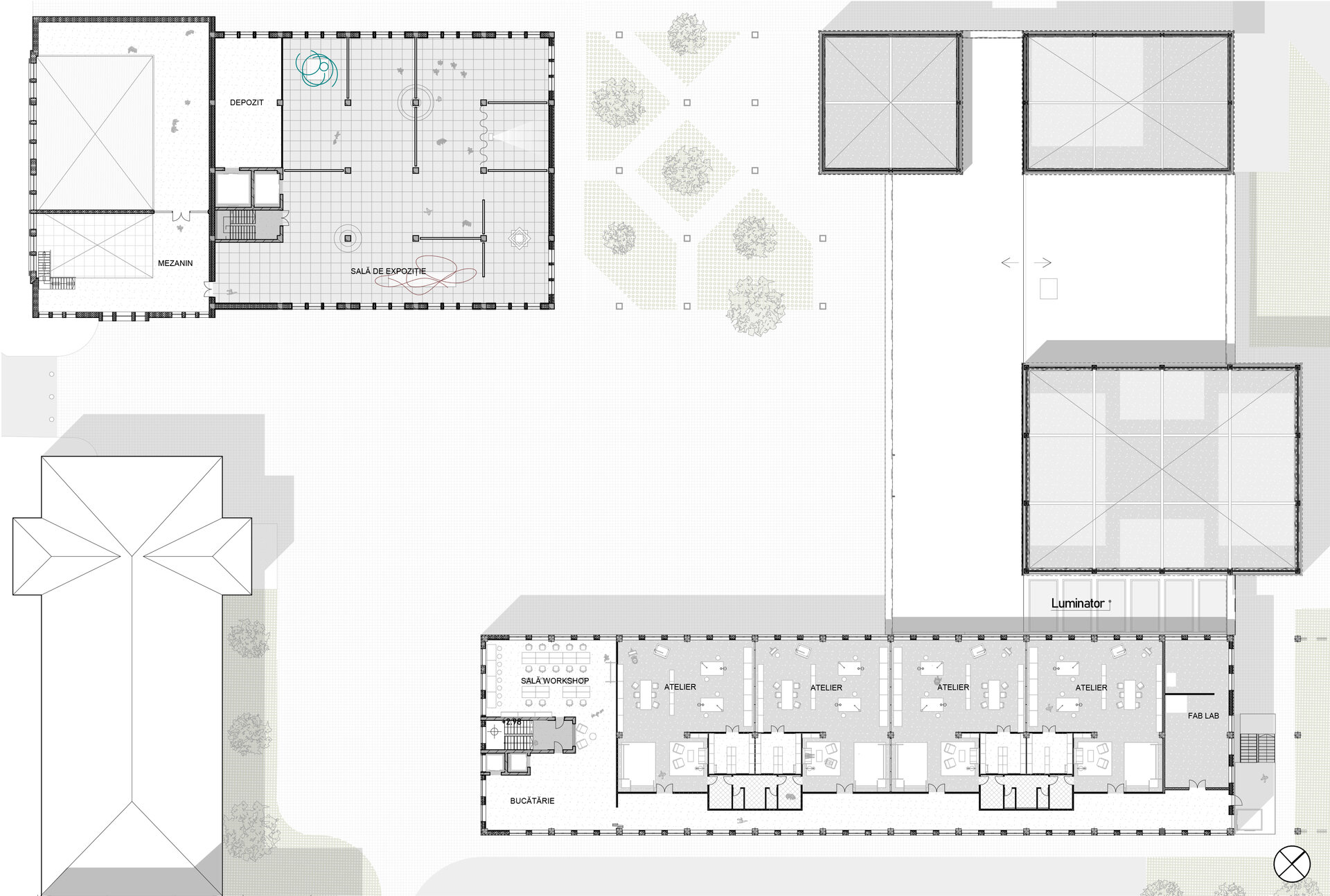 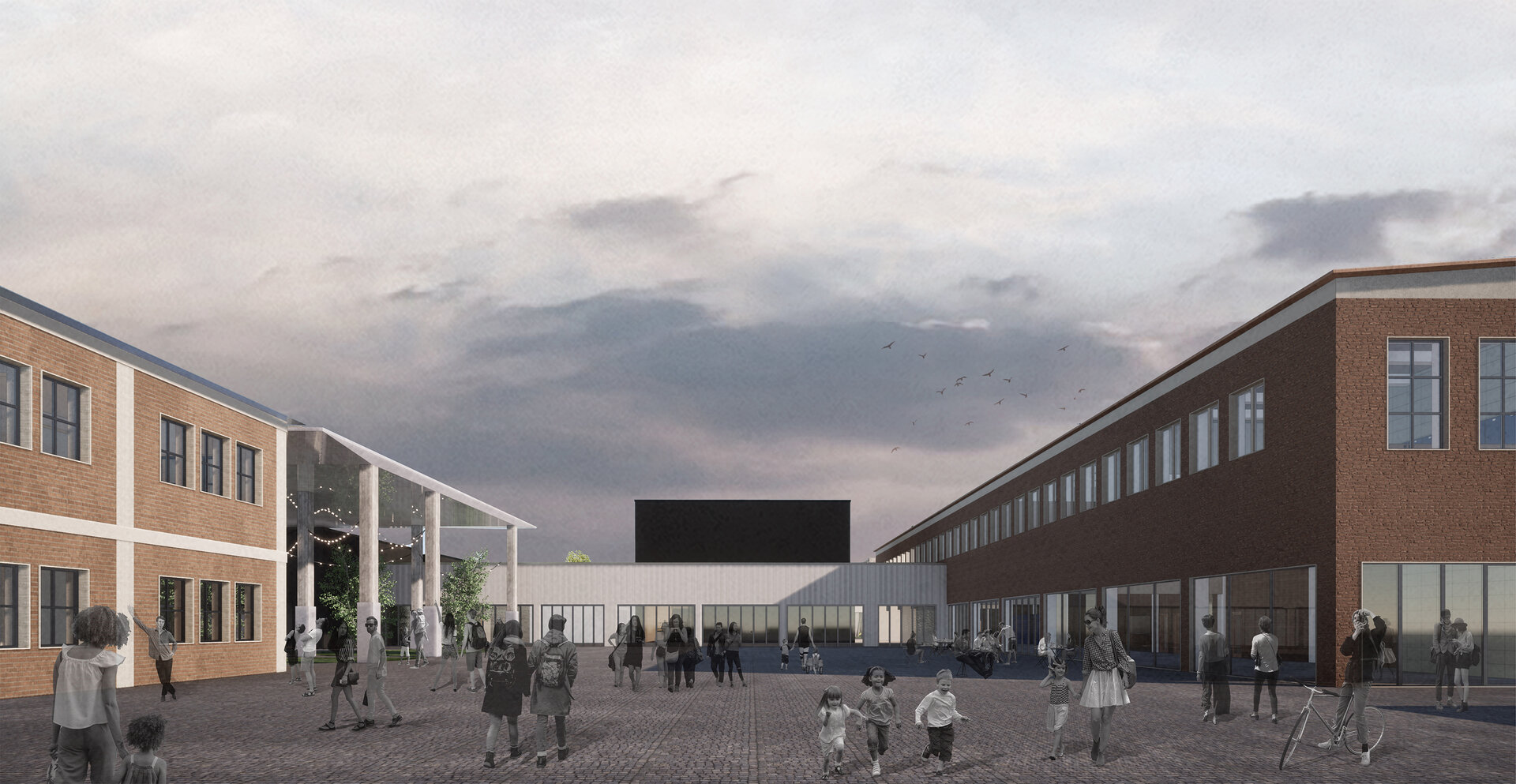 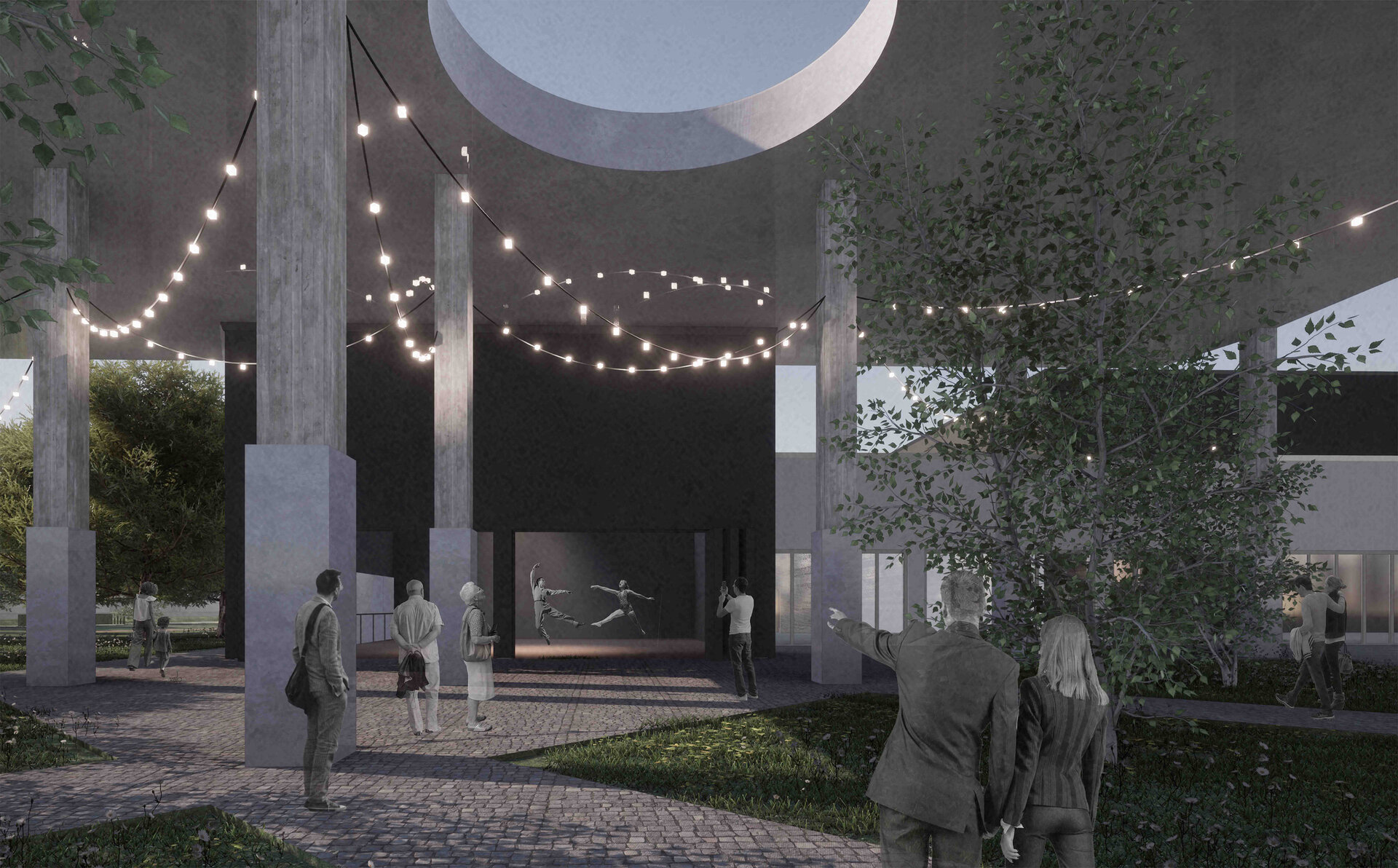 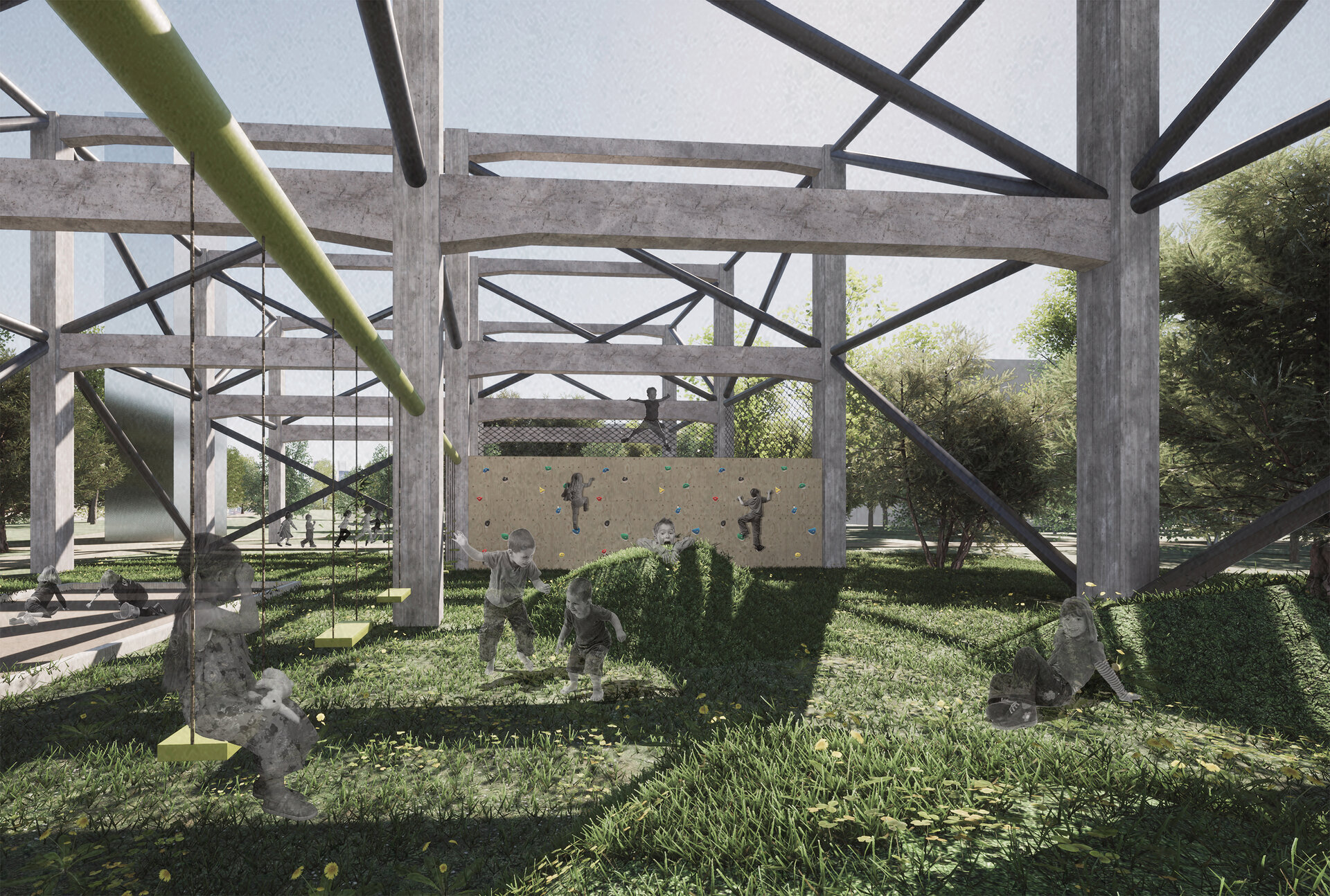 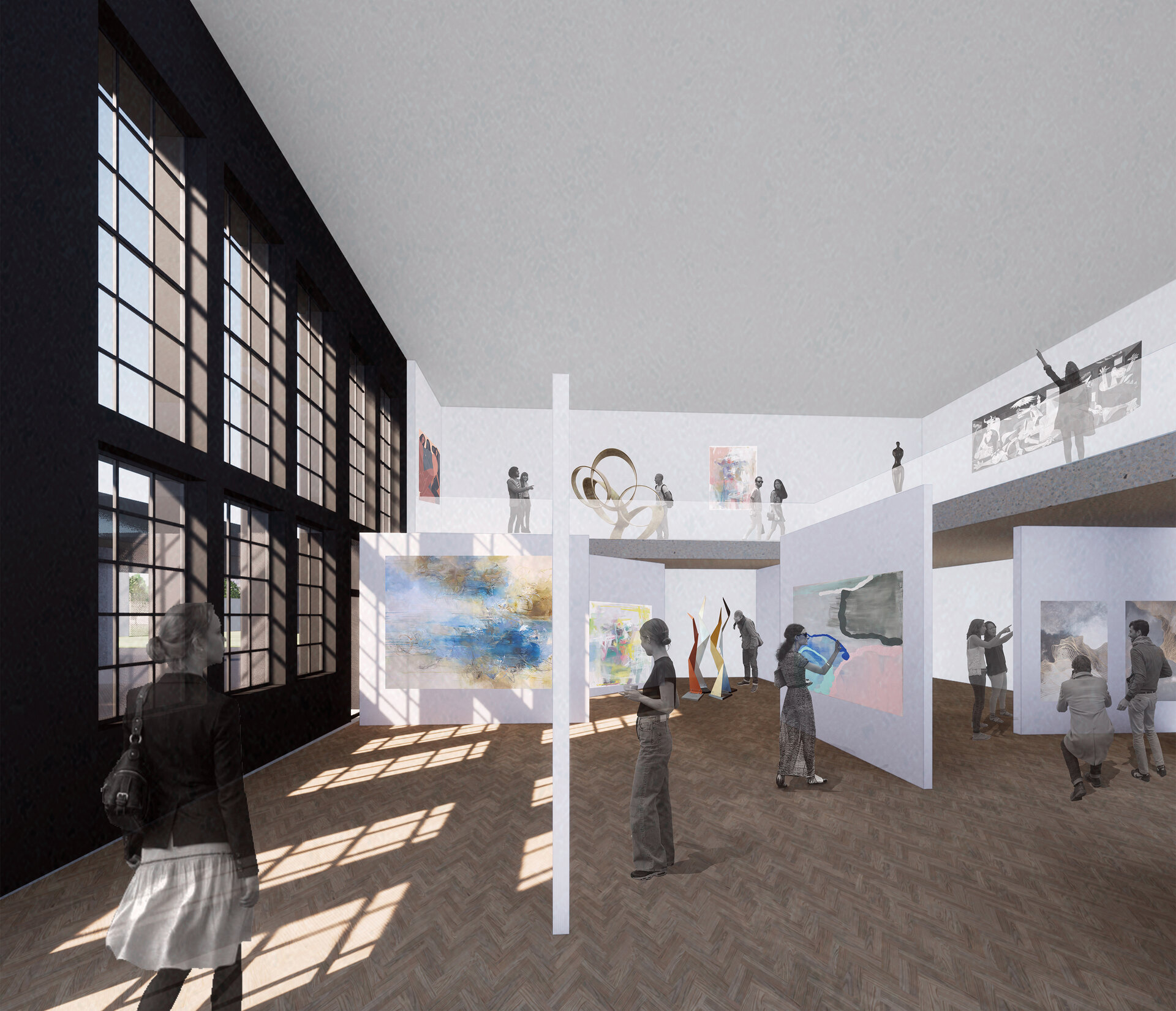 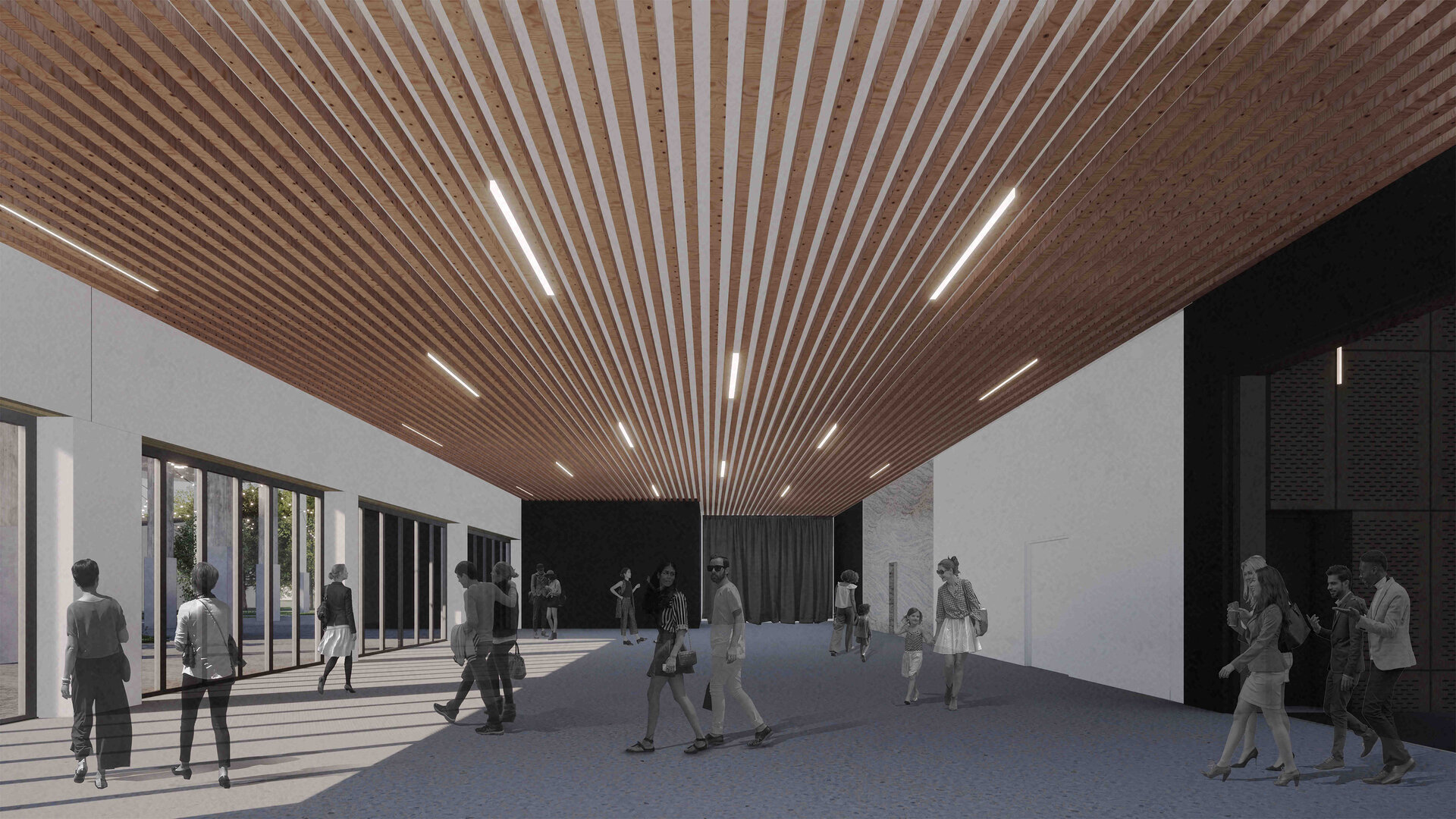 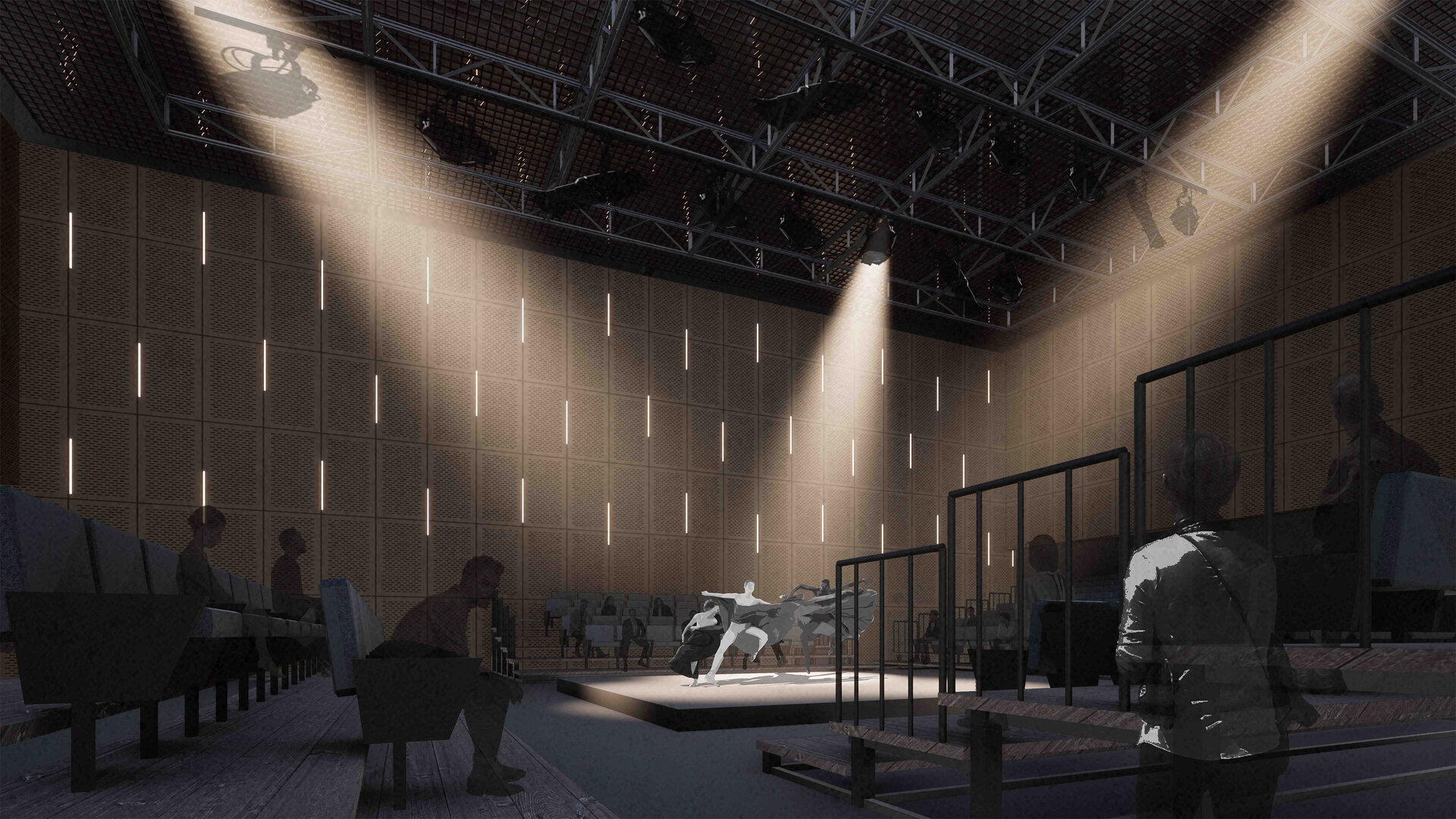 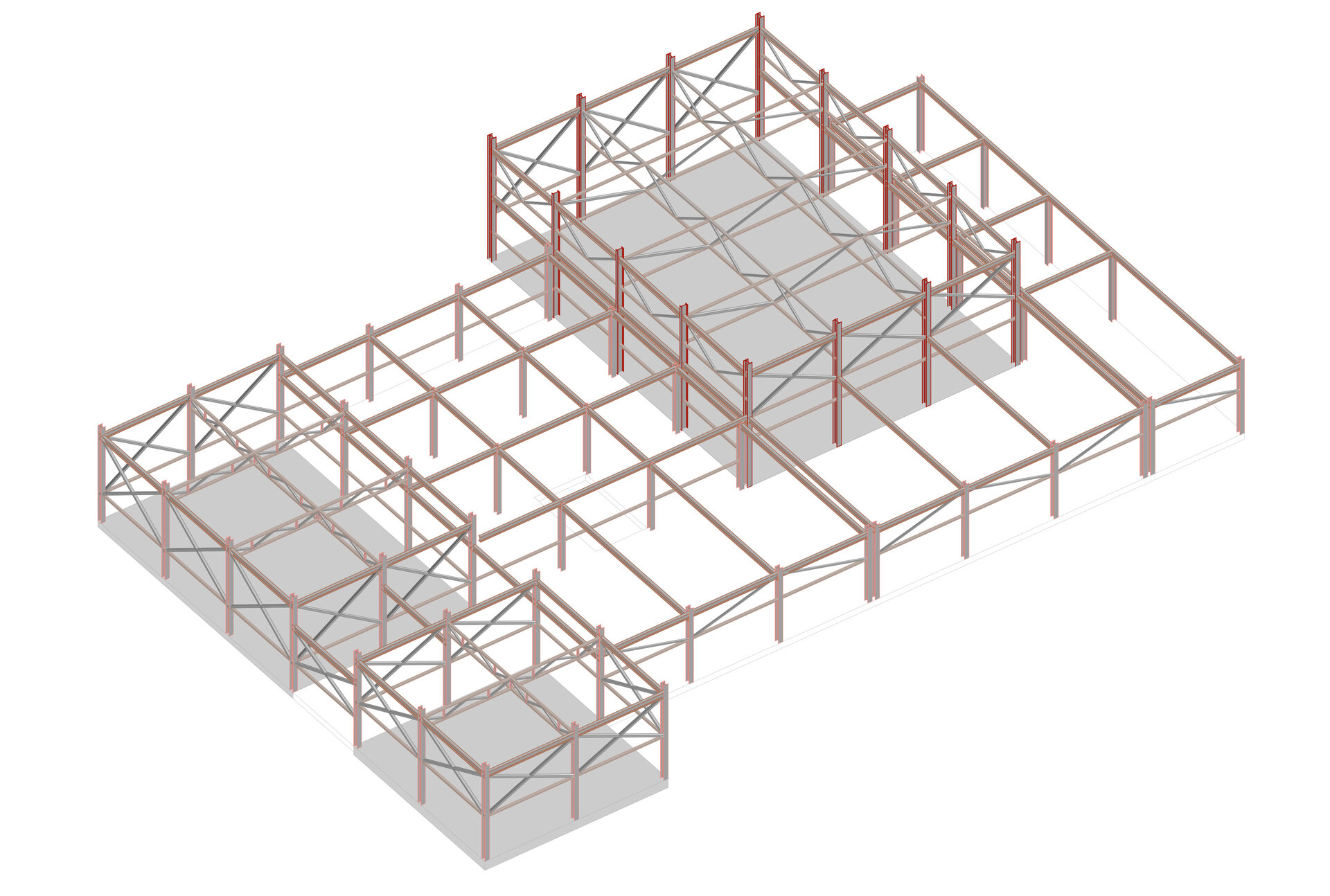 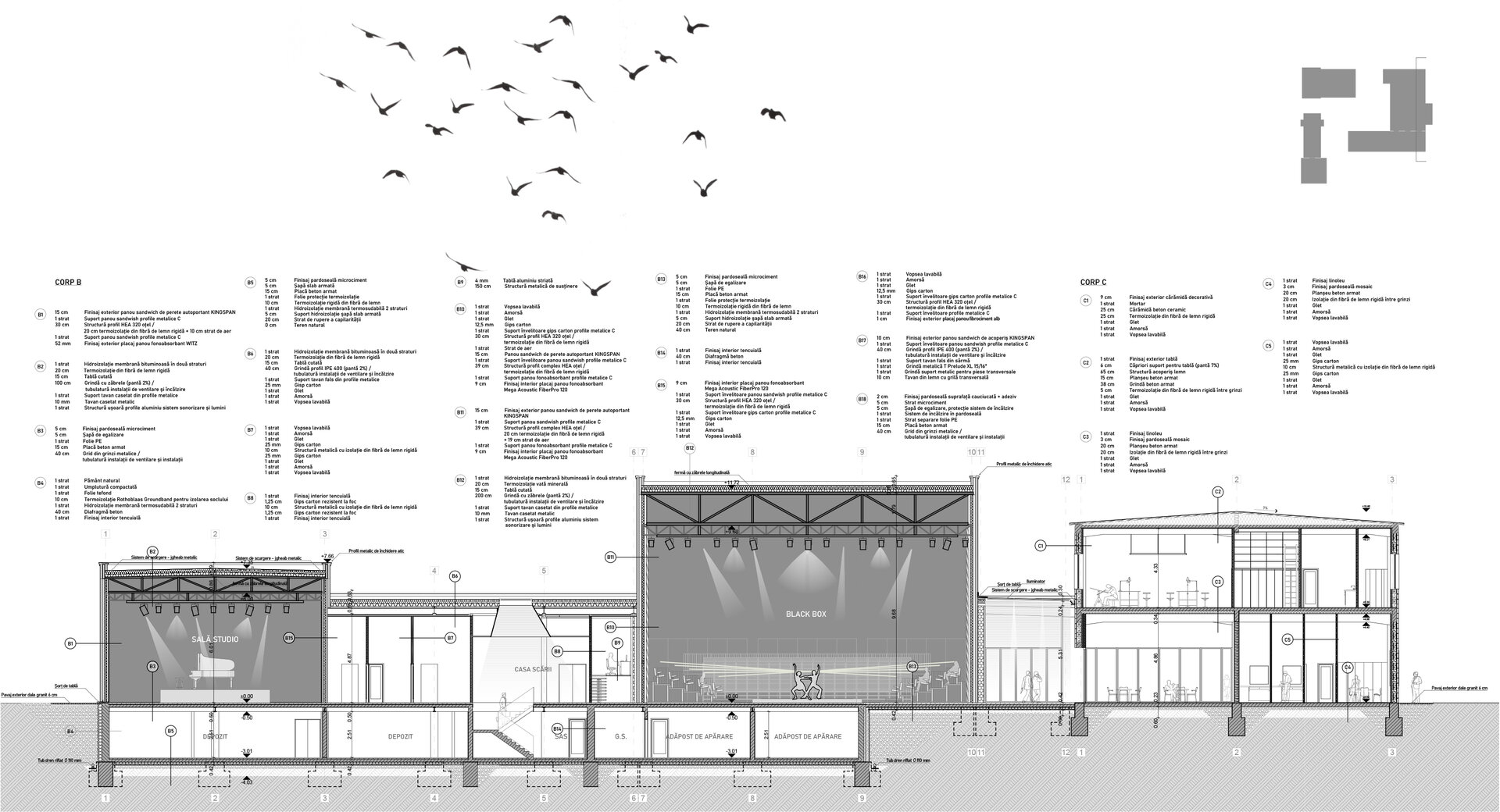