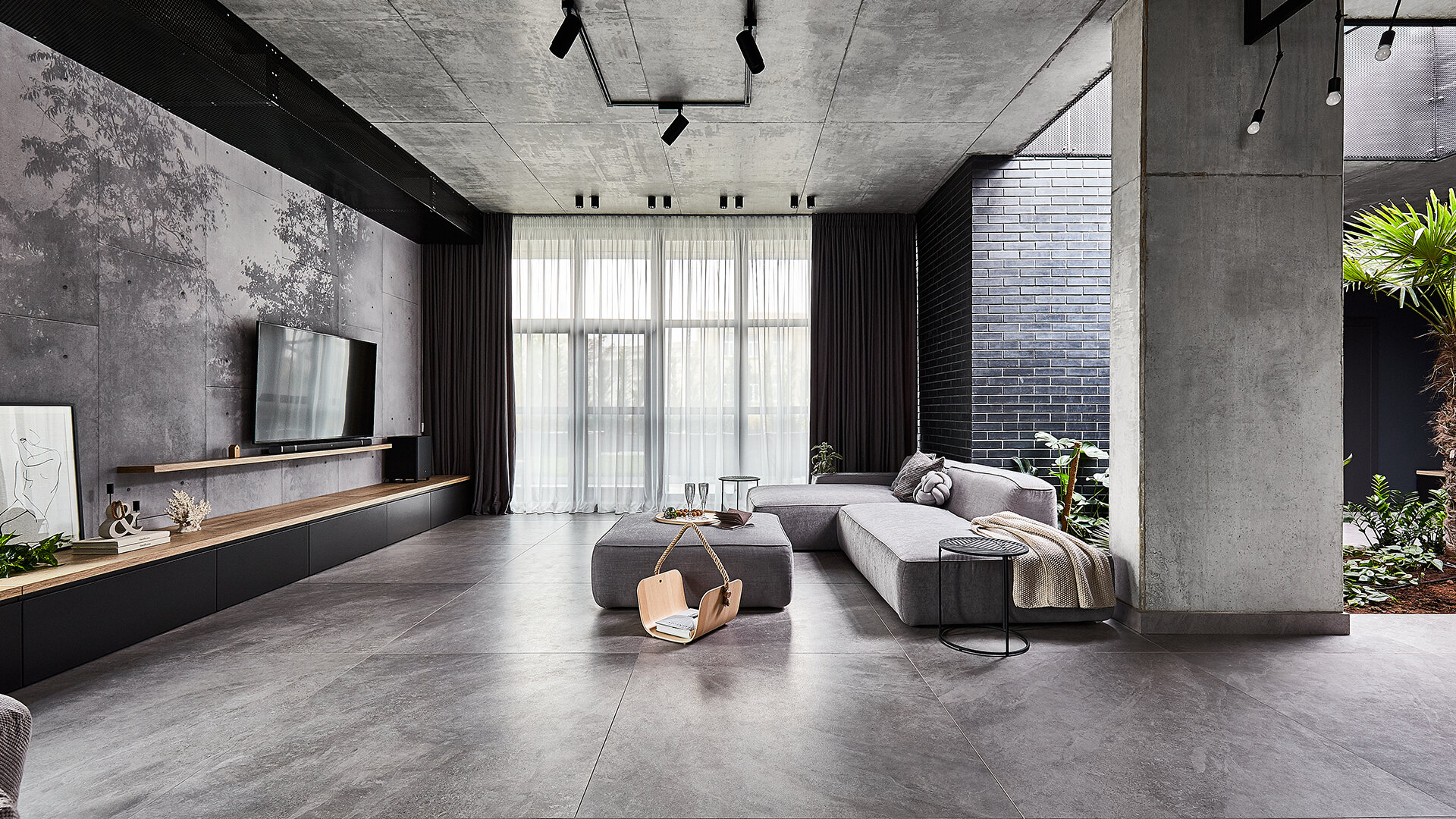 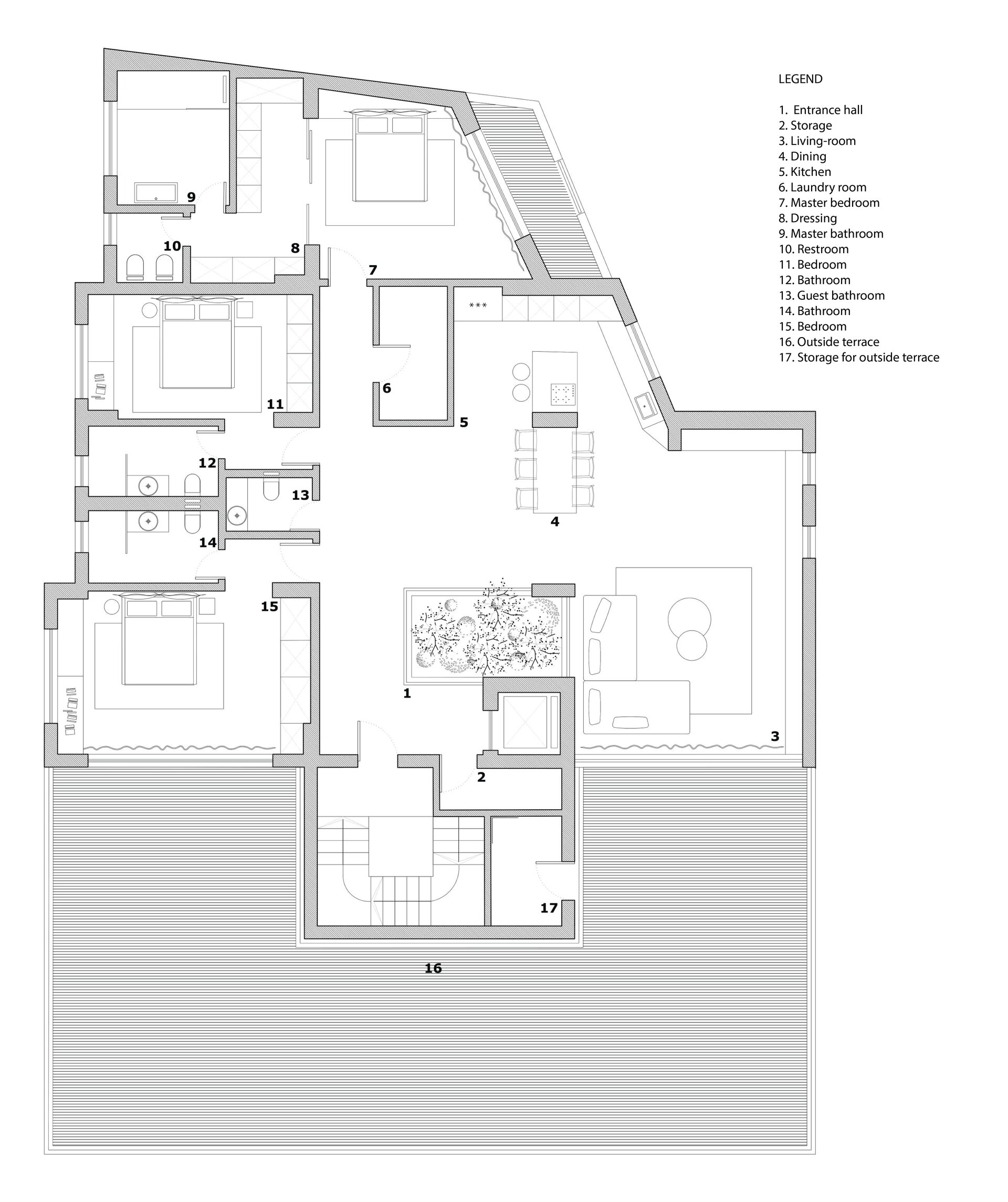 The privileged position by being located on the top level of a block of flats in the Unirii Square area of ​​the penthouse, gives the feeling of floating over the city.
It is divided into the living area which includes the entrance hall, the guest bathroom, the living room, the dining room and the kitchen and the sleeping area consisting of 3 bedrooms each with its own bathroom.
The concept started from the desire of the beneficiaries to live in a space inspired by the industrial style so that the specific elements of this style were required to be integrated in the arrangement: high height, large windows, use of a color palette in which black predominates and choosing natural and honest materials such as wood, metal, brick or formwork concrete.
The fact that the beneficiaries discussed with Dofinteriors team from the phase in which the architectural project was still taking shape meant a lot in order to be able to fulfill their wish on the space in which they wanted to live.
The first perspective to space opens from the entrance to an inner courtyard that has been inserted as a central element around which all other functions revolve.
In addition to the unexpected aesthetic and emotional factor that this yard with tropical plants has, it also has a functional element that was necessary to bring light into a space that would otherwise have been dark and dull.
This desire to bring nature inside the urban living space, is an intention that is found in all the projects of the Dofinteriors team, which relies on the importance of human connection with nature.
Natural light plays an important role in the arrangement, generously penetrating the space thanks to the indoor courtyard, the large glazed surfaces and the terrace that the penthouse enjoys.
The color range used, including in the case of furniture, is a neutral one that favors matte shades of black and gray in different shades balanced by the warm texture of brushed and untreated wood.
Dominant is given by the industrial accents highlighted by clear touches at the level of spatial composition.
At the level of the ceiling is exposed the apparent concrete, the painted brick walls bring an extra texture and the strip of light that joins the floor ceiling creating a bright plane, separates the day area from the night.
The open kitchen faces the living room, emphasizing in a central position adjacent to the inner courtyard, the dining area dominated by the wood essence of the table top.
The chairs thus become the sculptural elements in the frame.
The filomuro doors of the bedrooms support the aesthetic unity of the arrangement being camouflaged in the walls and painted in the same tone with them, the wall thus becoming a canvas on which the rest of the compositional elements are highlighted.
The guest bathroom brings a pleasant visual surprise by extending a tall mirror to the skylight that allows natural light to invade the room giving a unique sense of connection to the sky.
The bedrooms bring an extra dynamism and theatricality due to the chosen textures and decor elements.
The bathrooms are treated in harmony with the major theme, in which the solid wood has the main role being found in the volume of the washbasins, the rest of the finishes approaching neutral shades from the dark and matte gray family.
The result of the arrangement is expressive and transmits vitality, authenticity and freshness in an urban setting that manages to produce the transition between city and home from the first perspective. 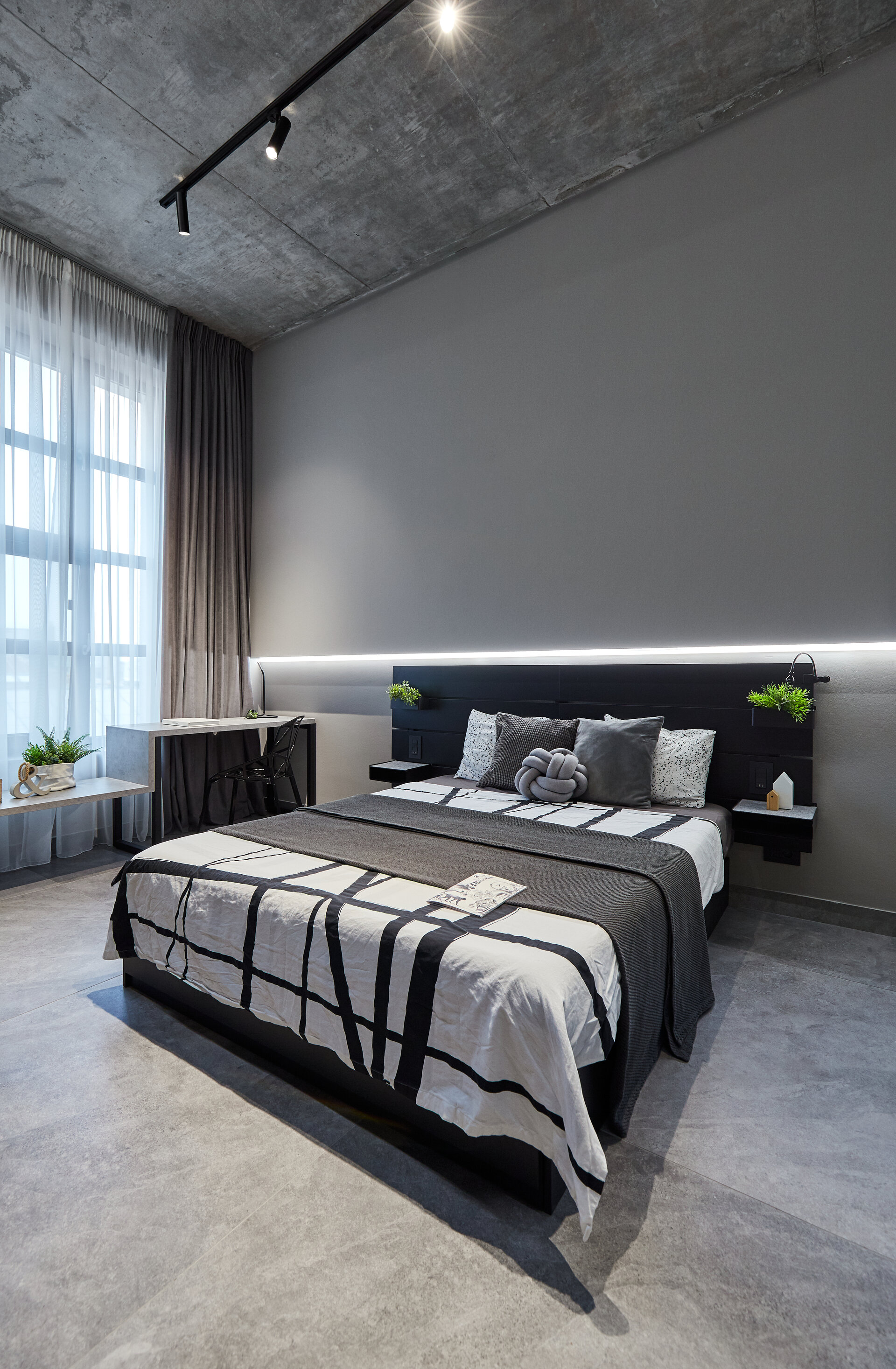 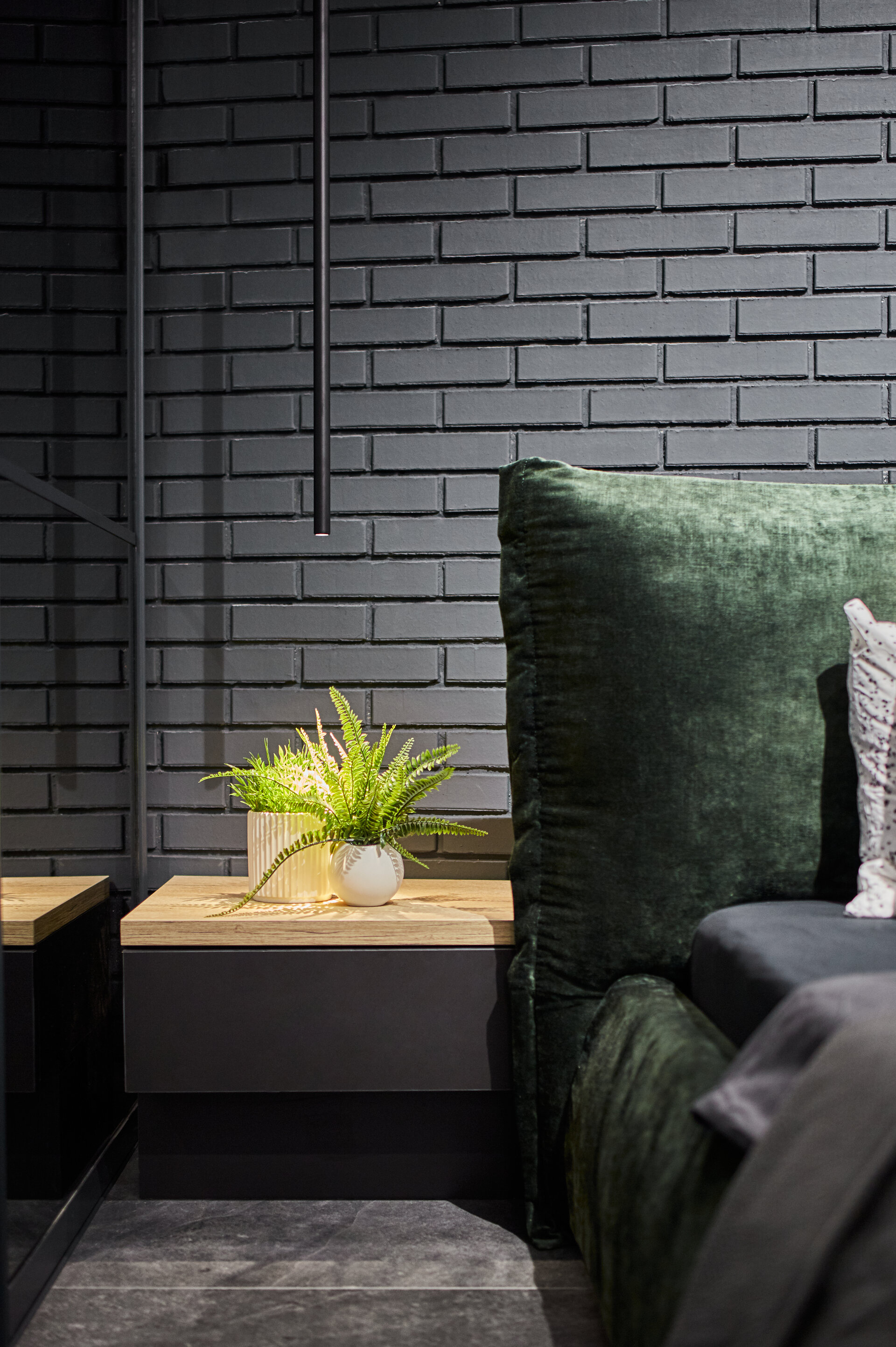 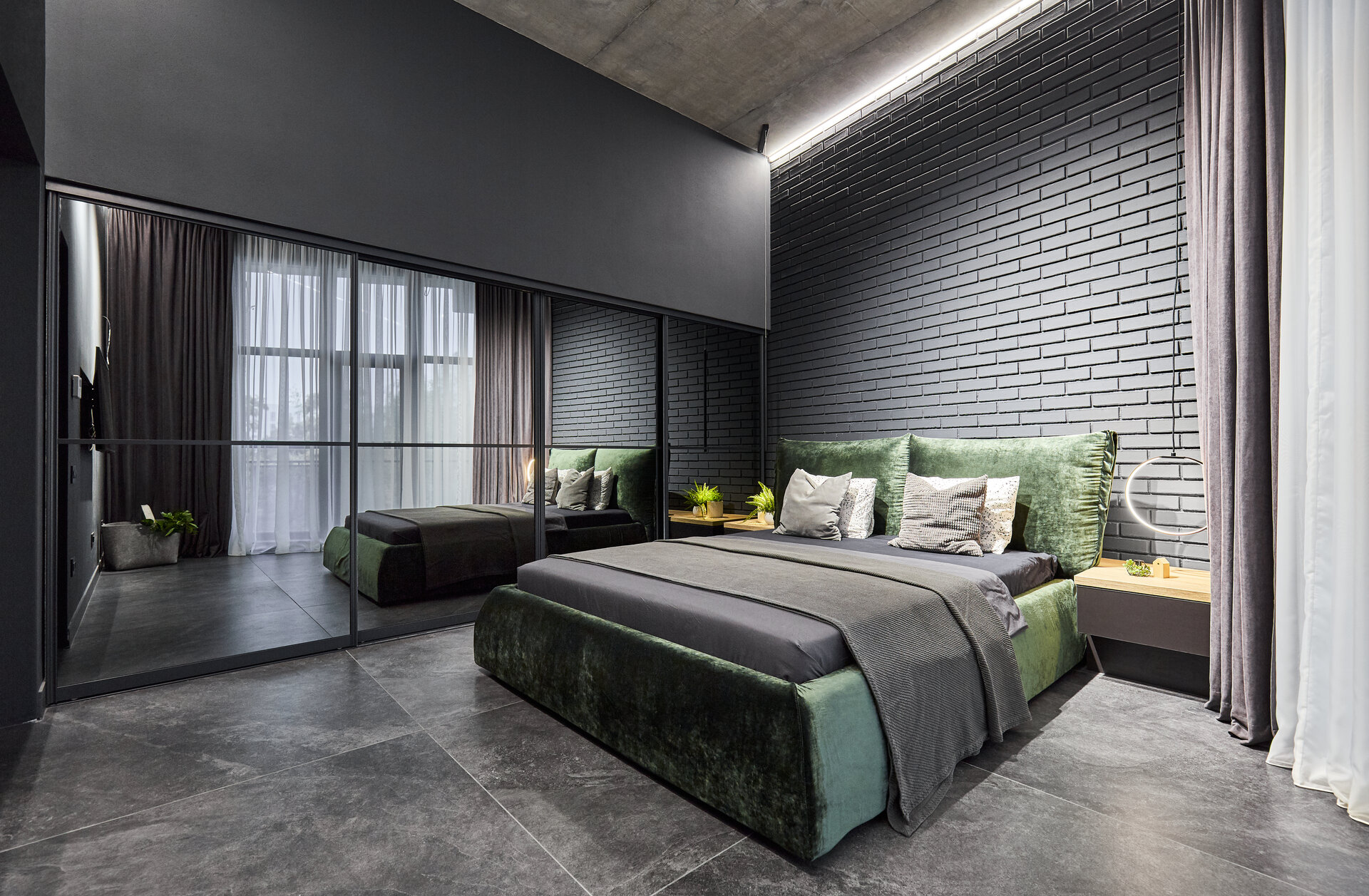 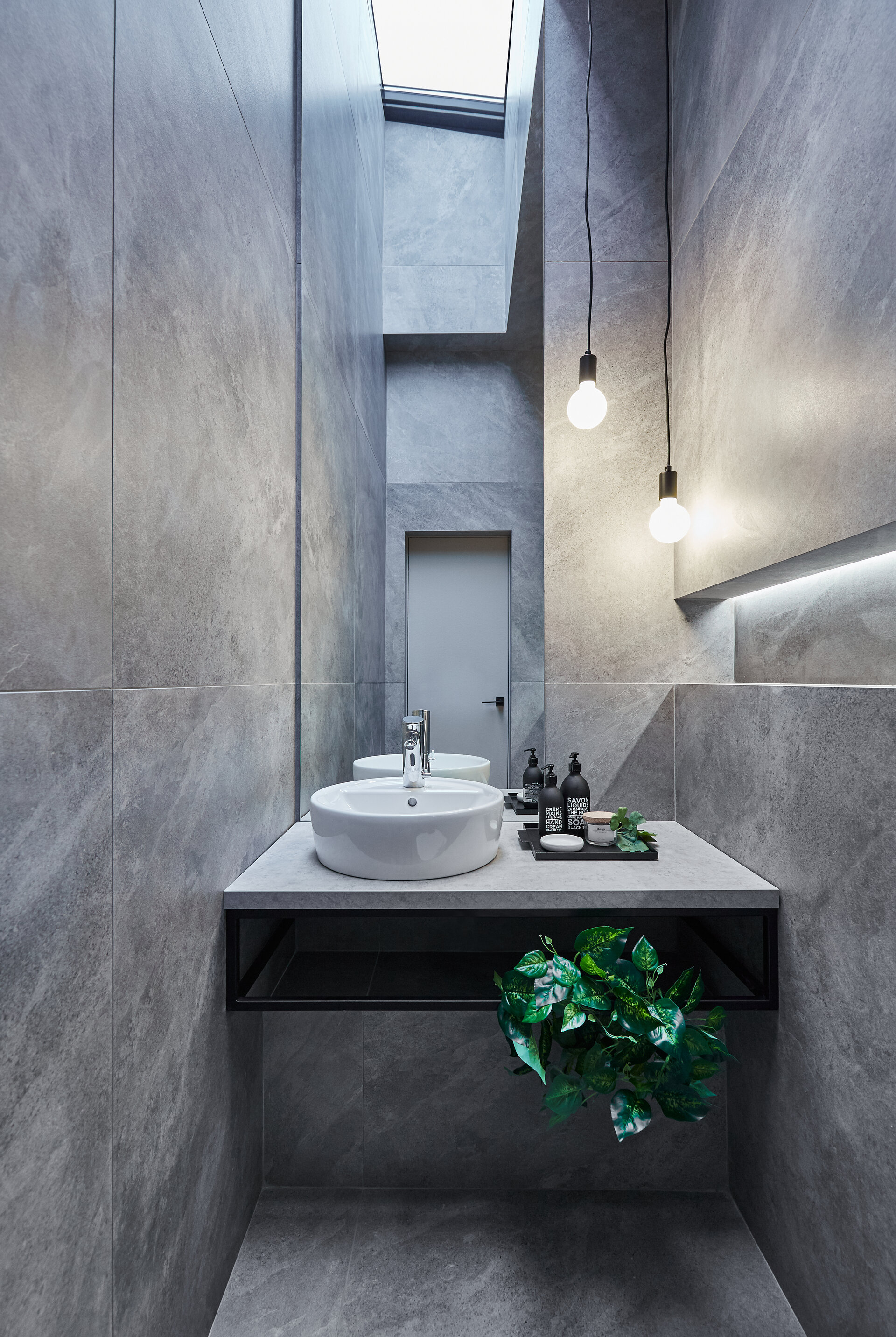 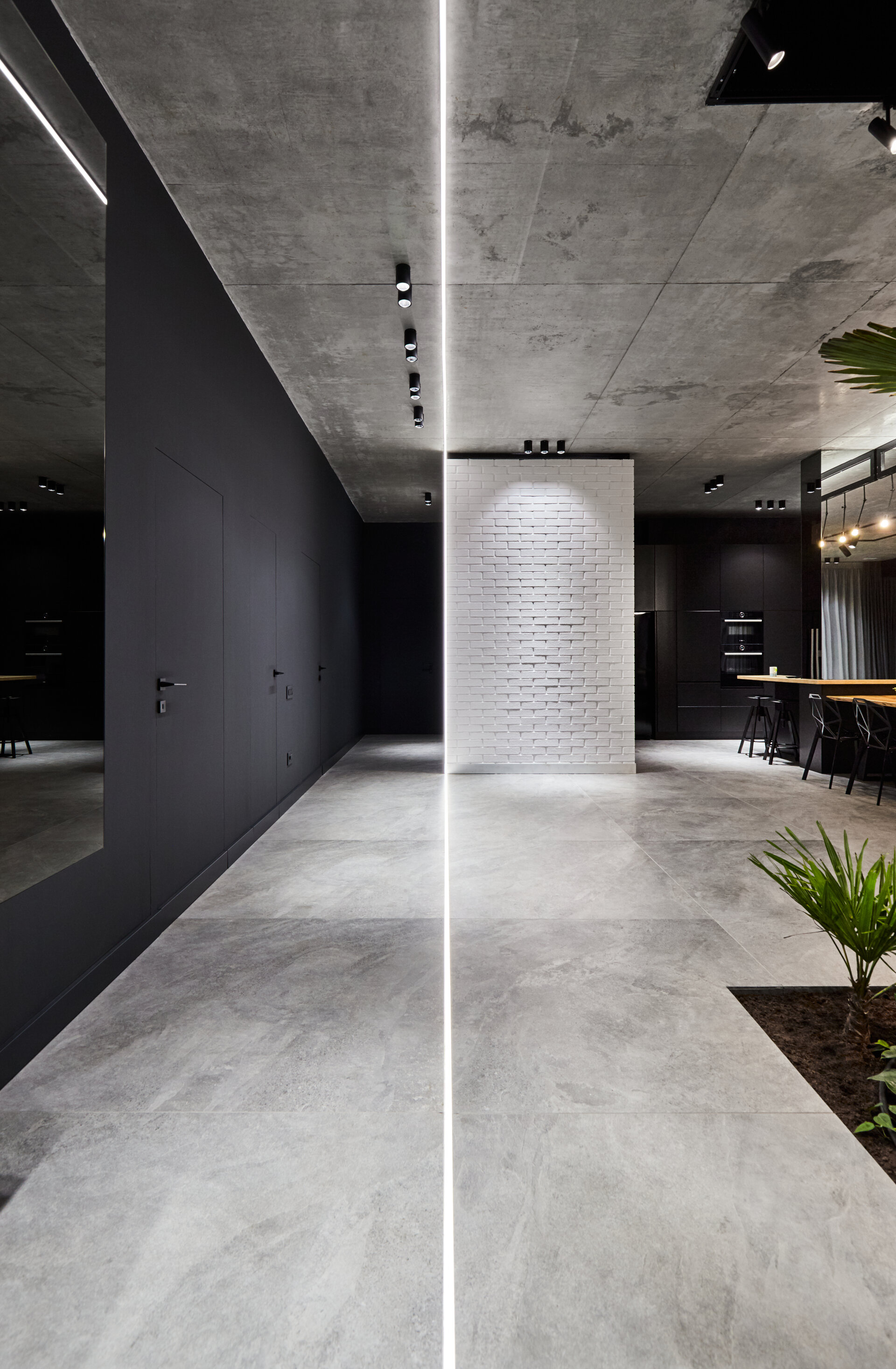 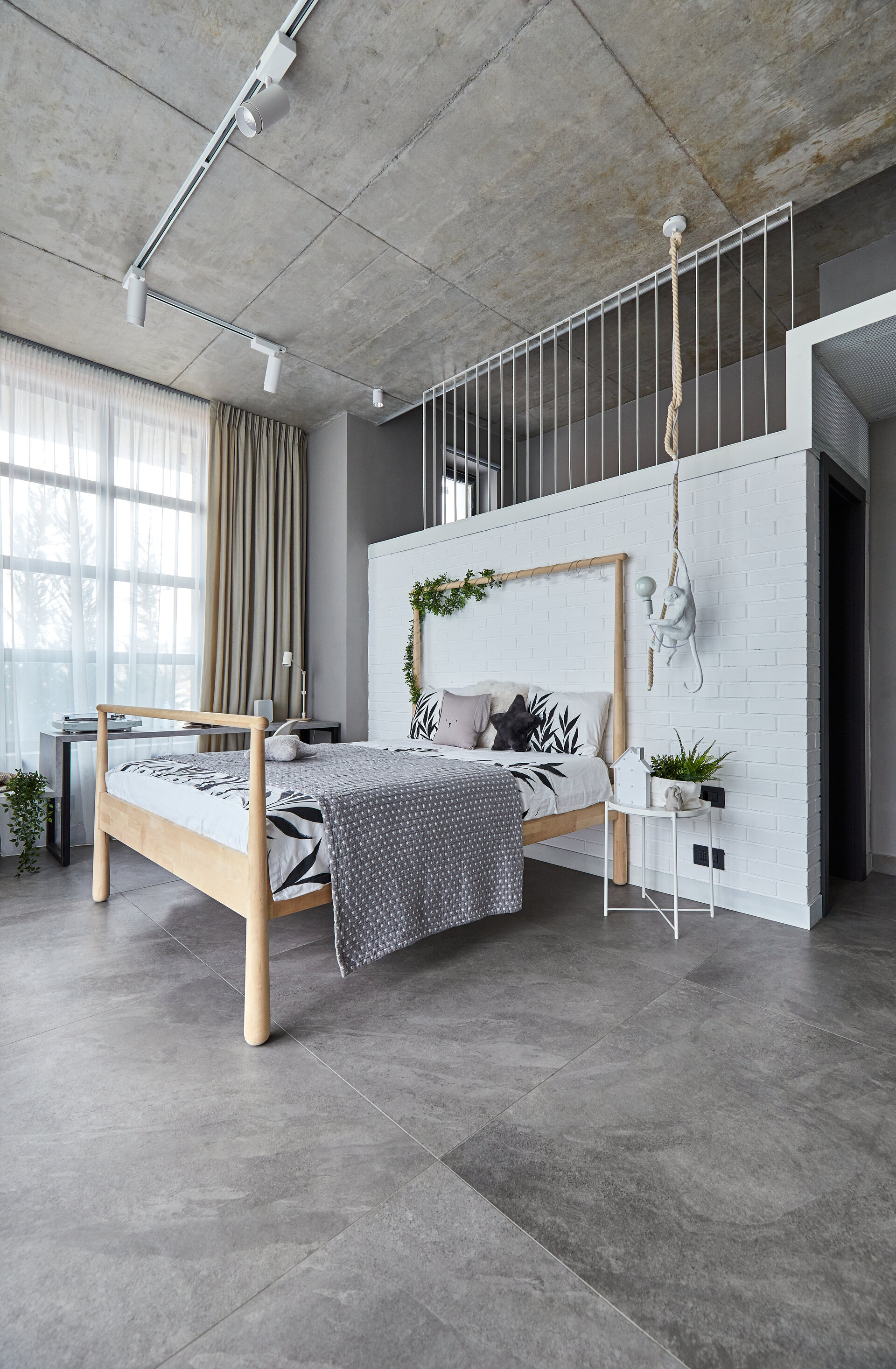 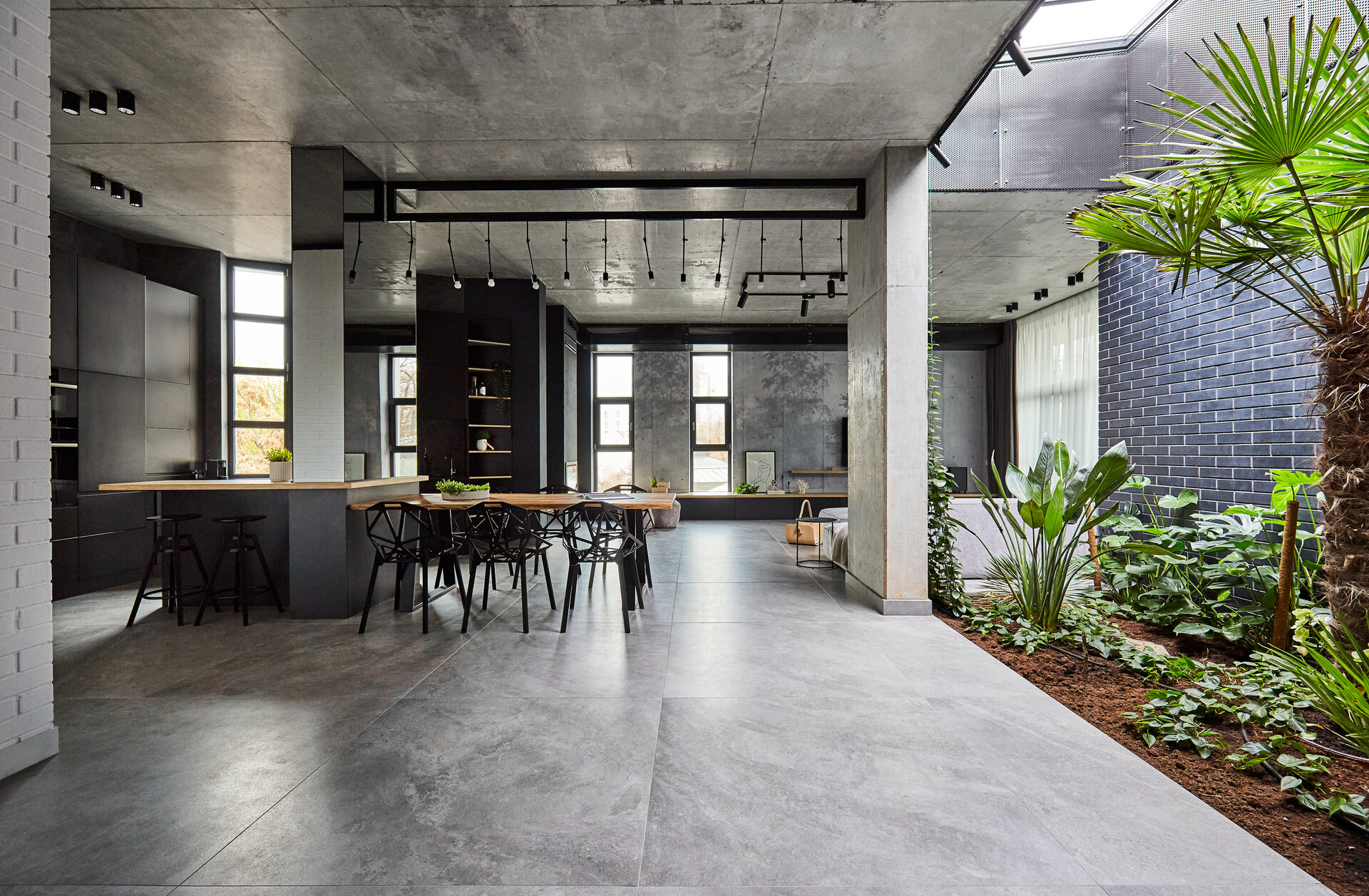 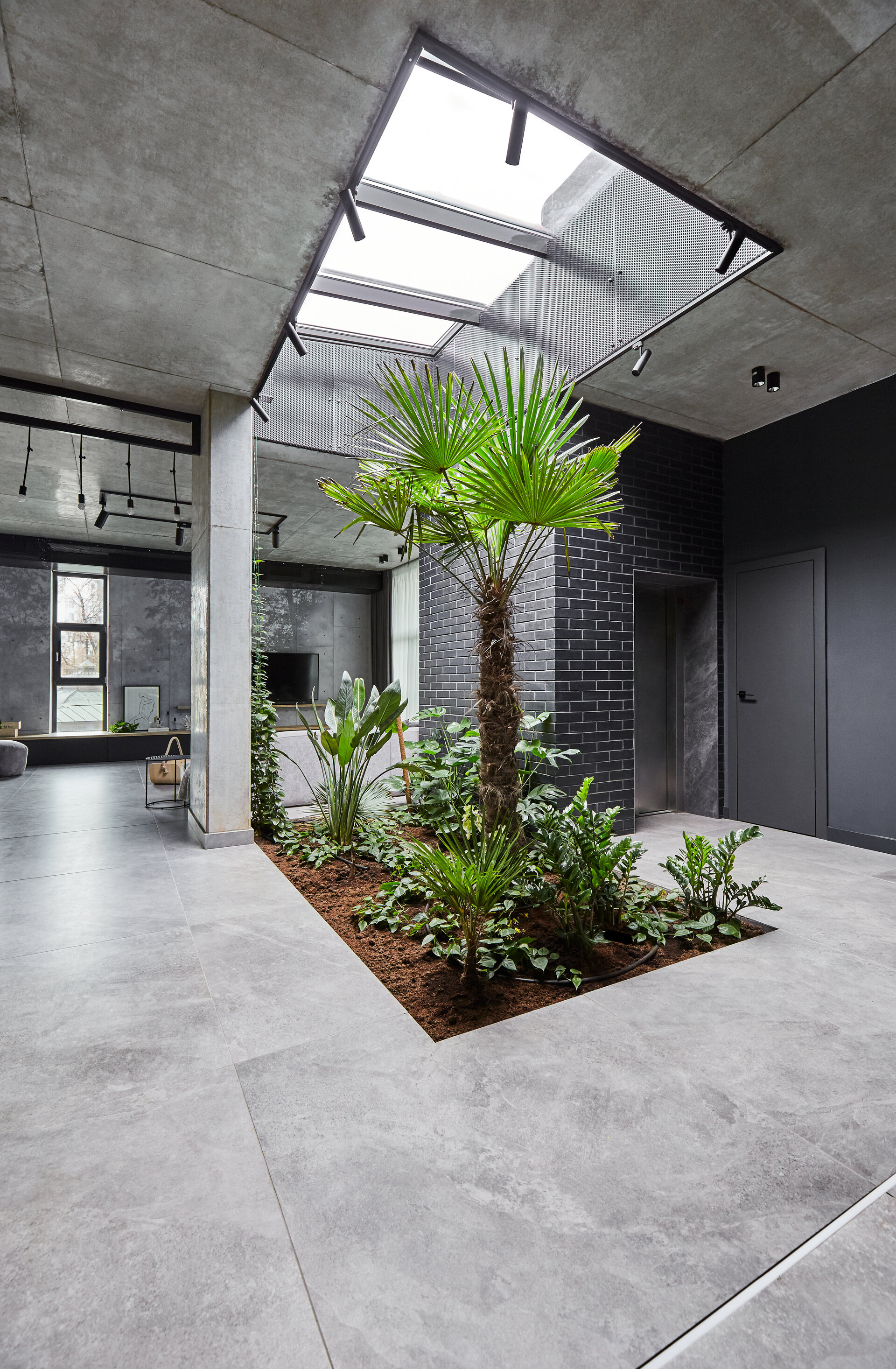 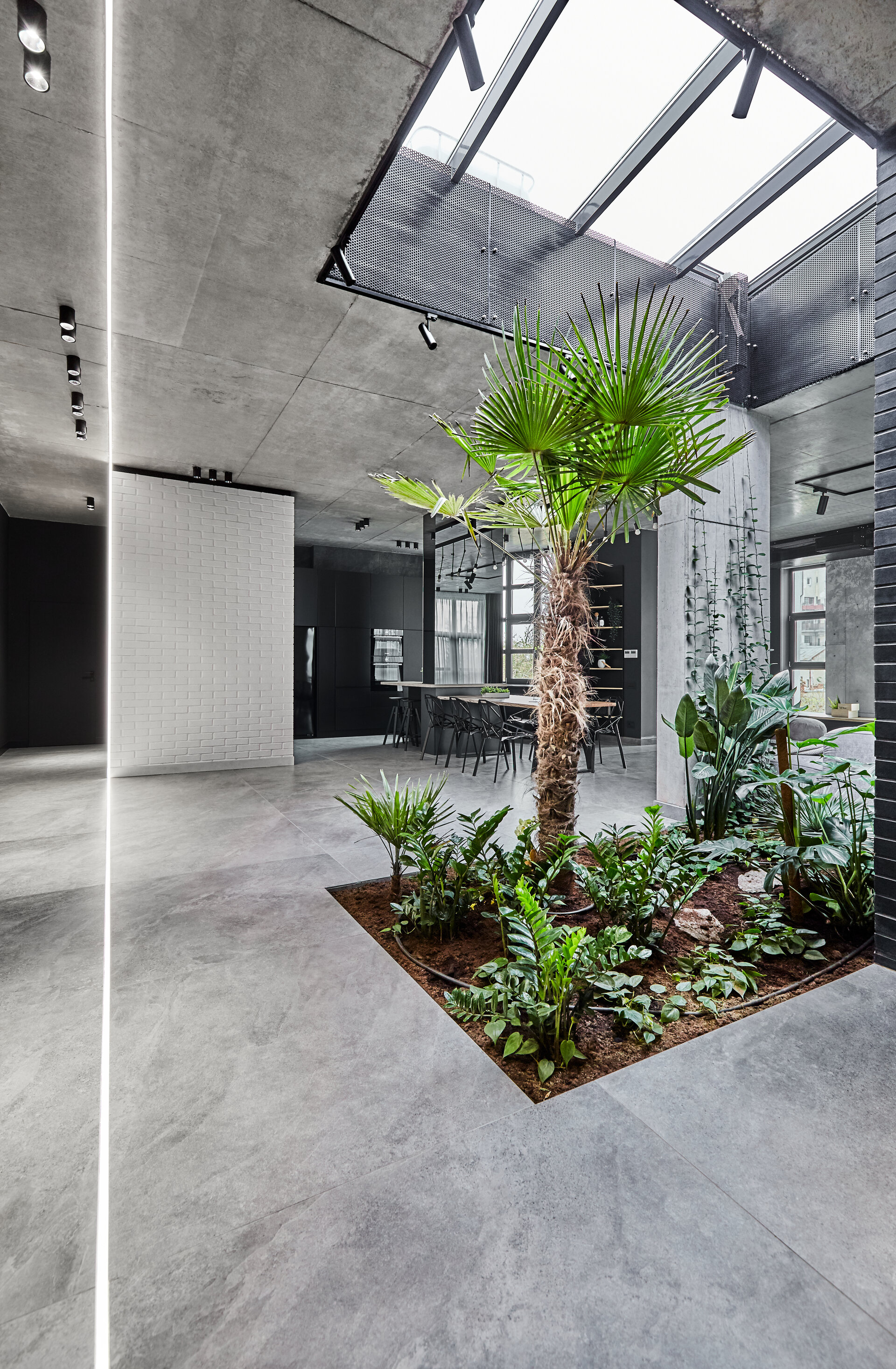 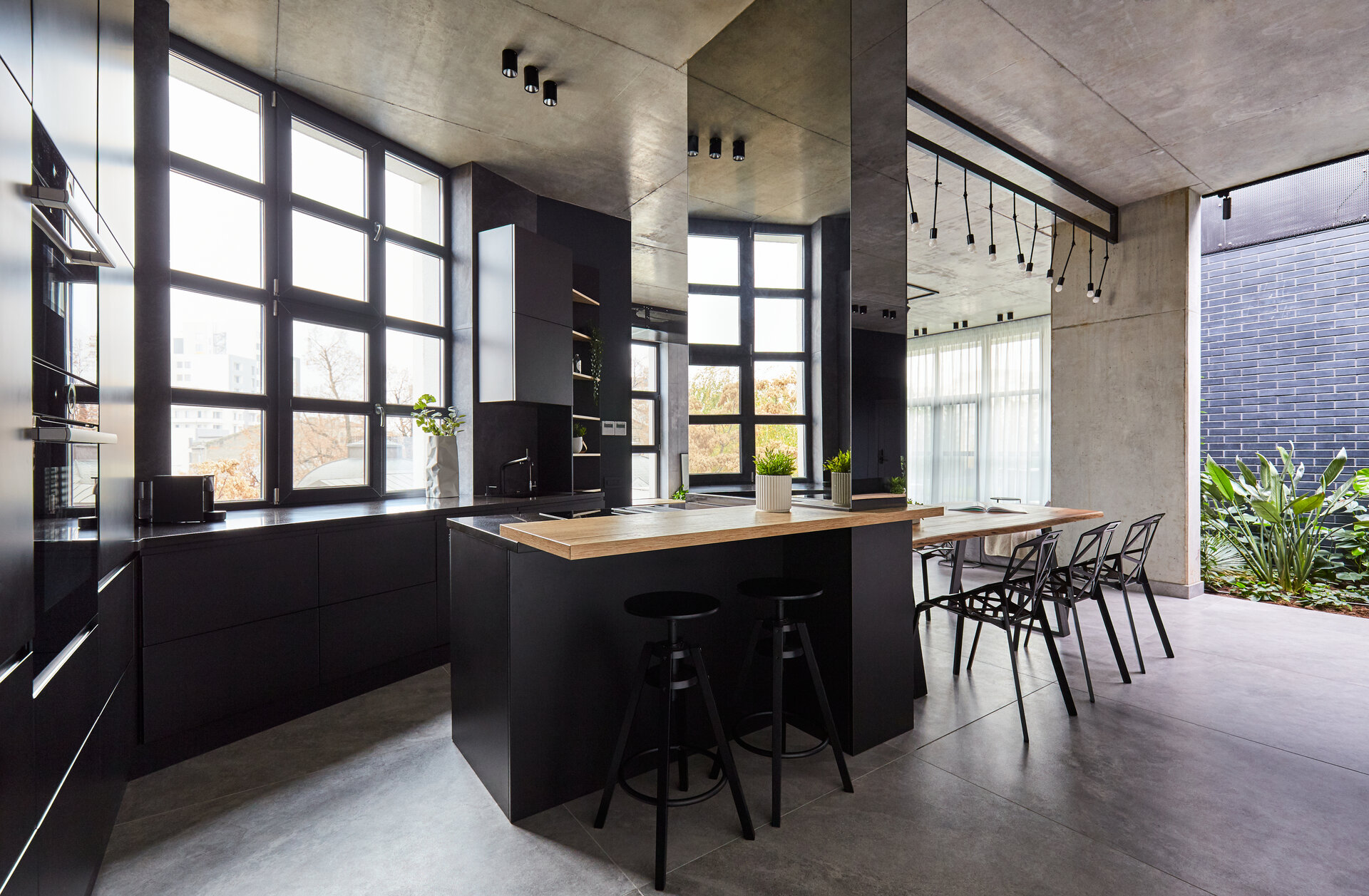 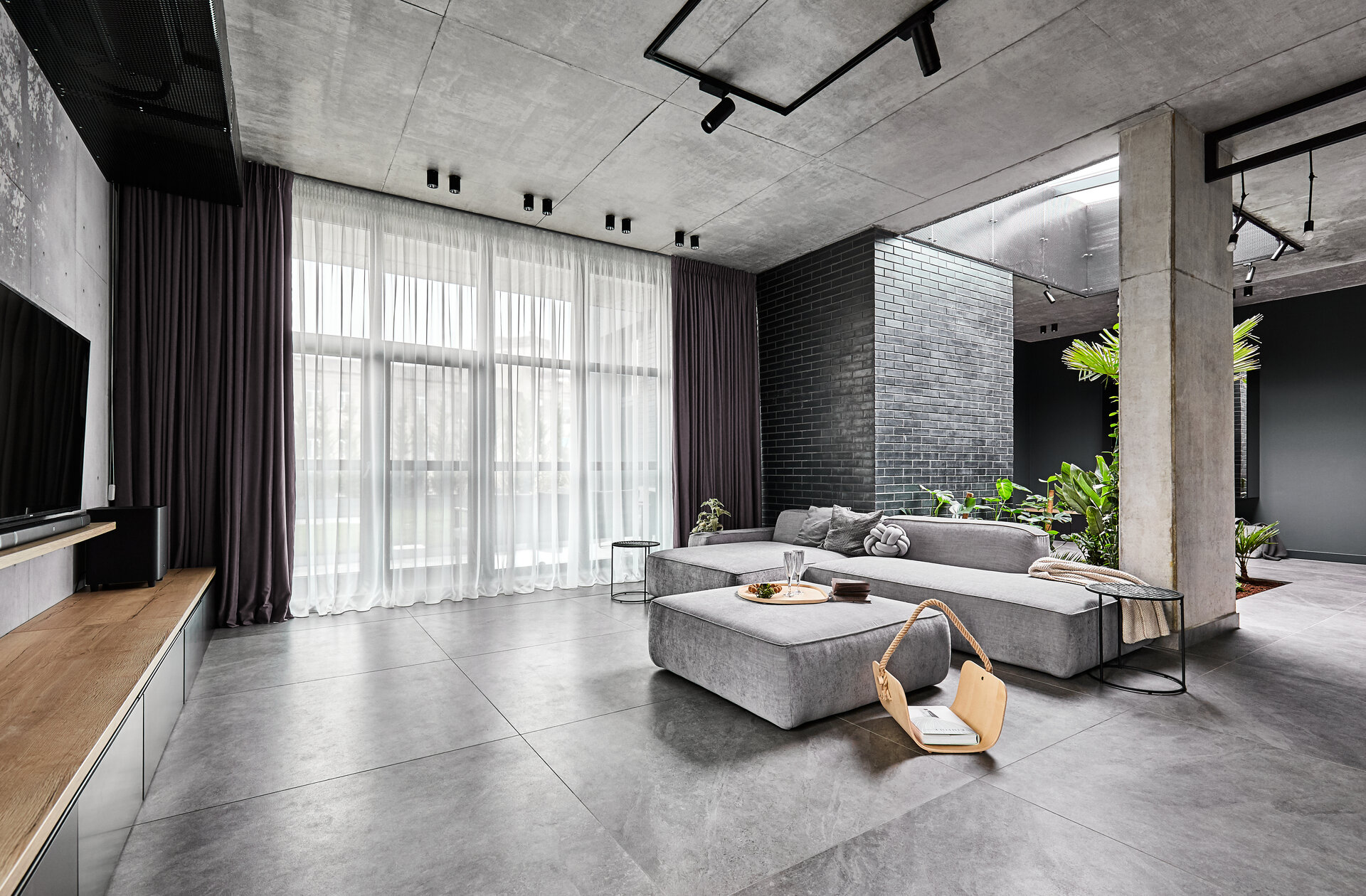 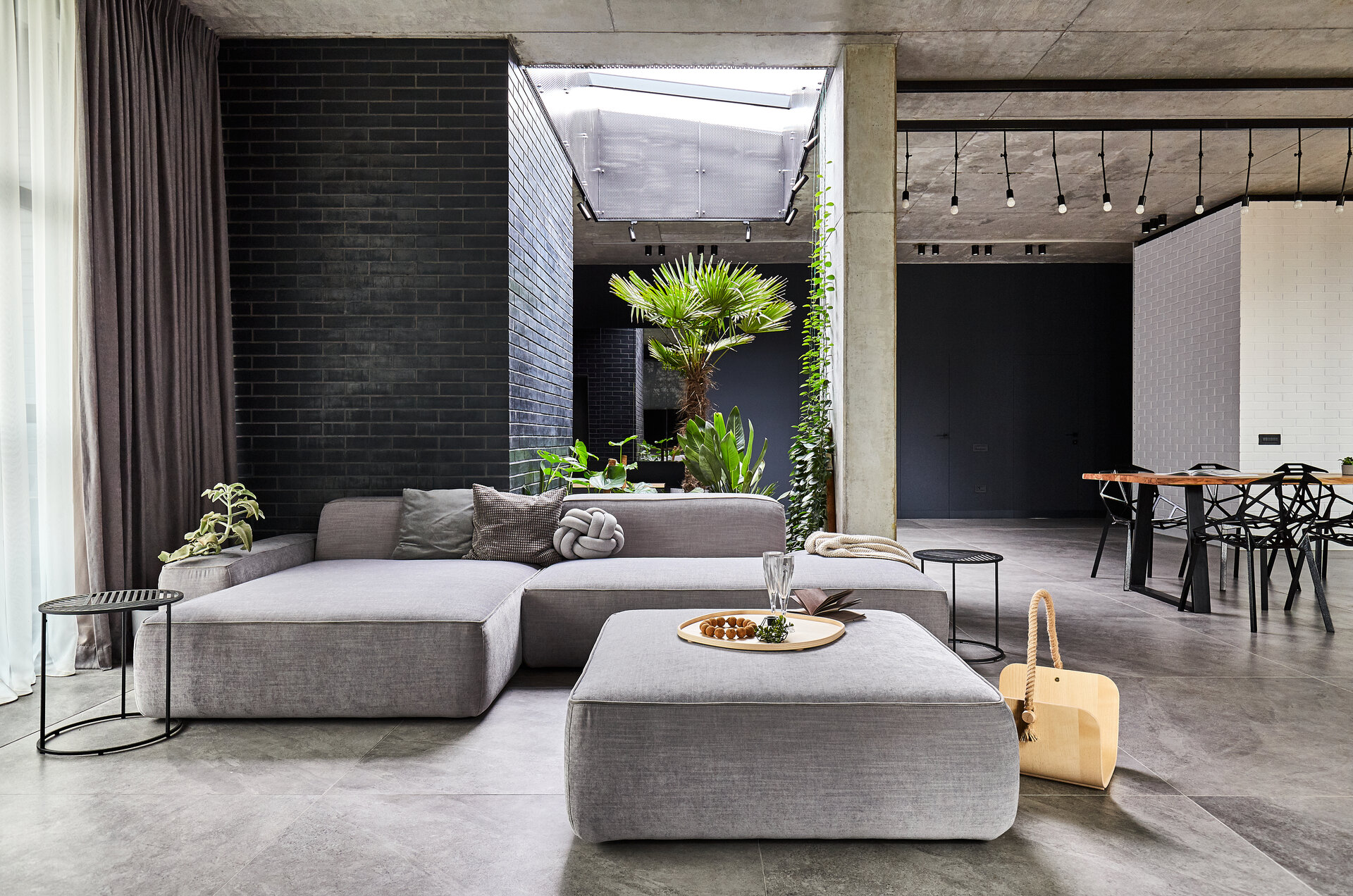 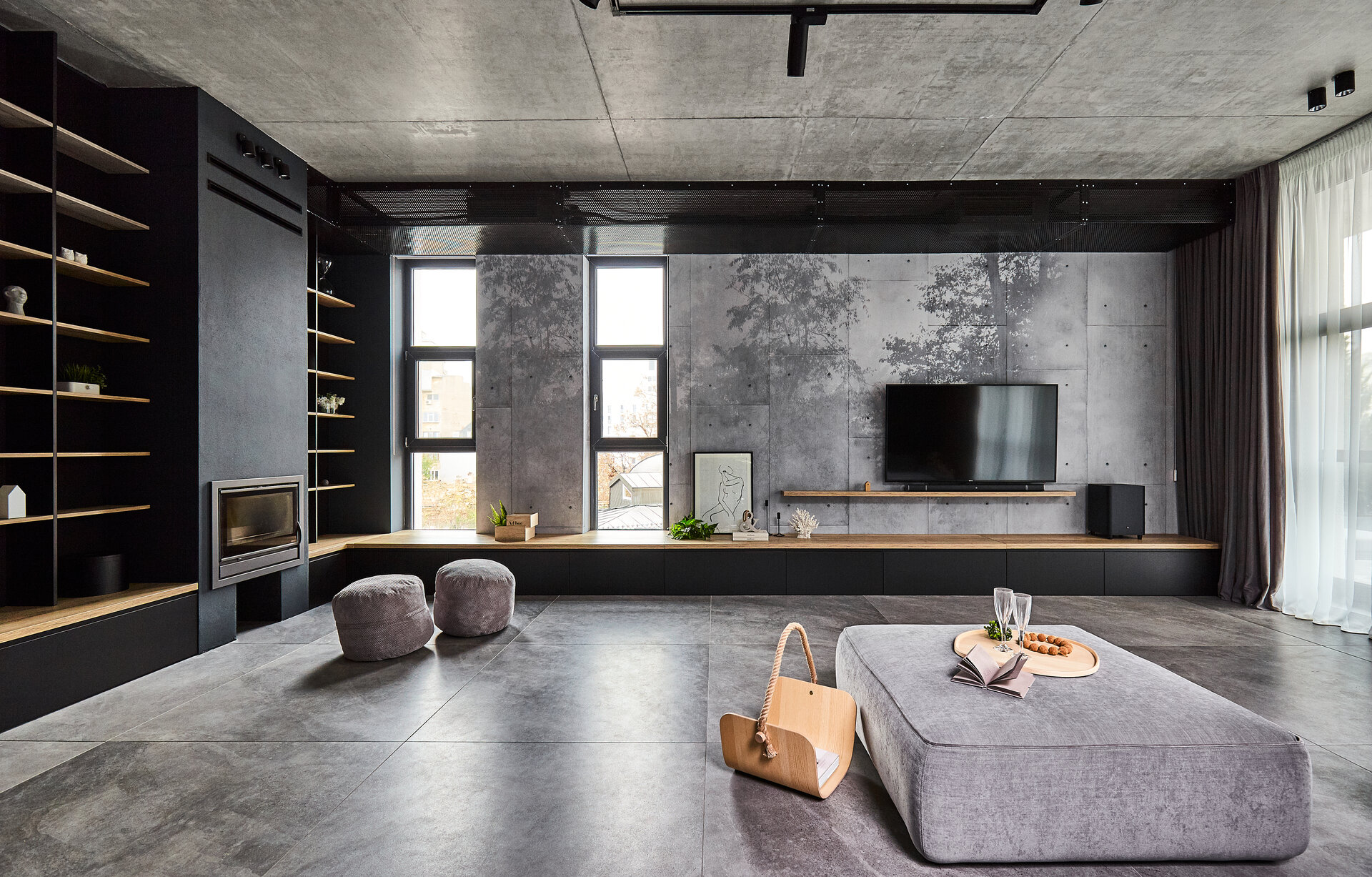 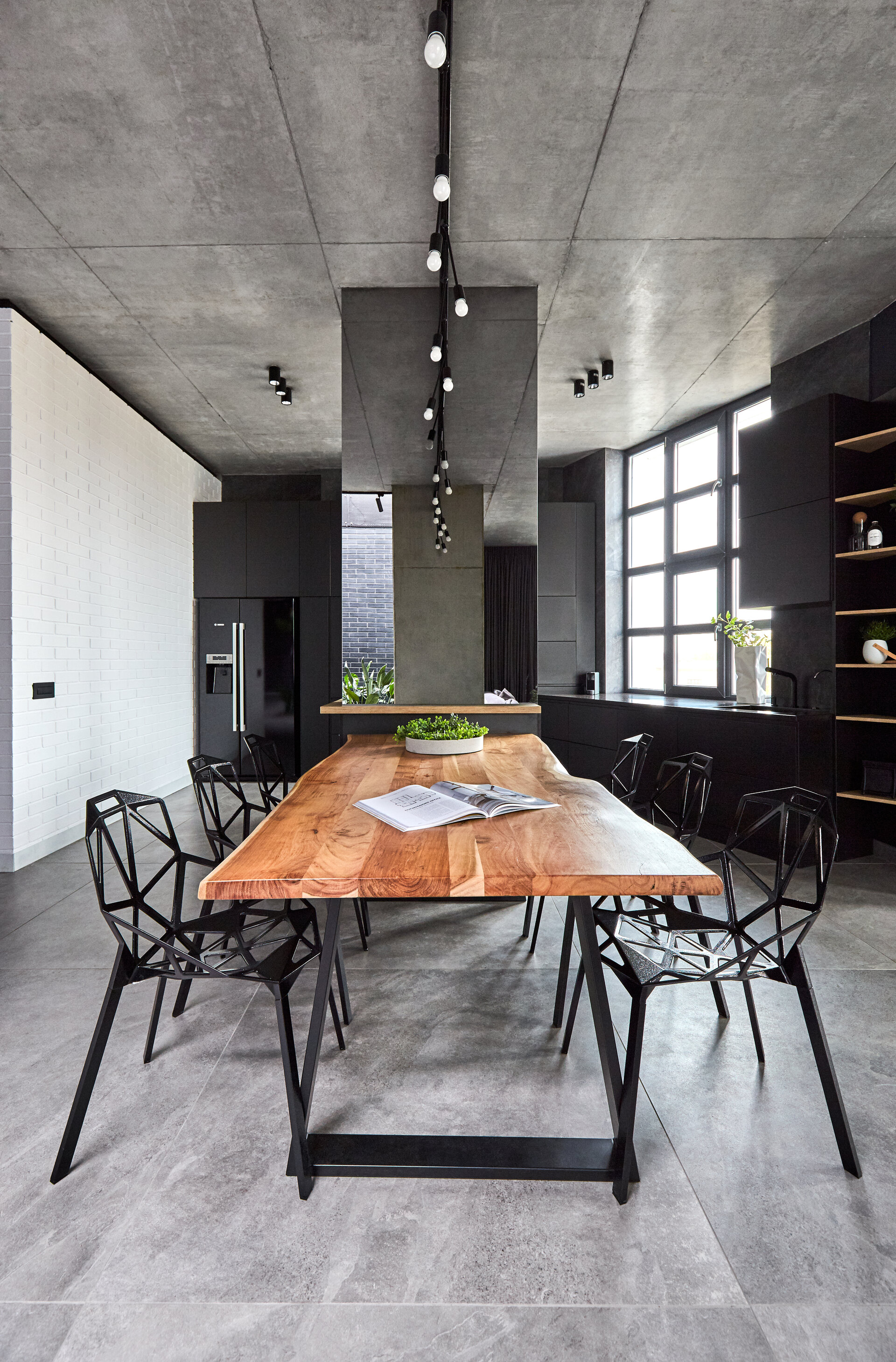 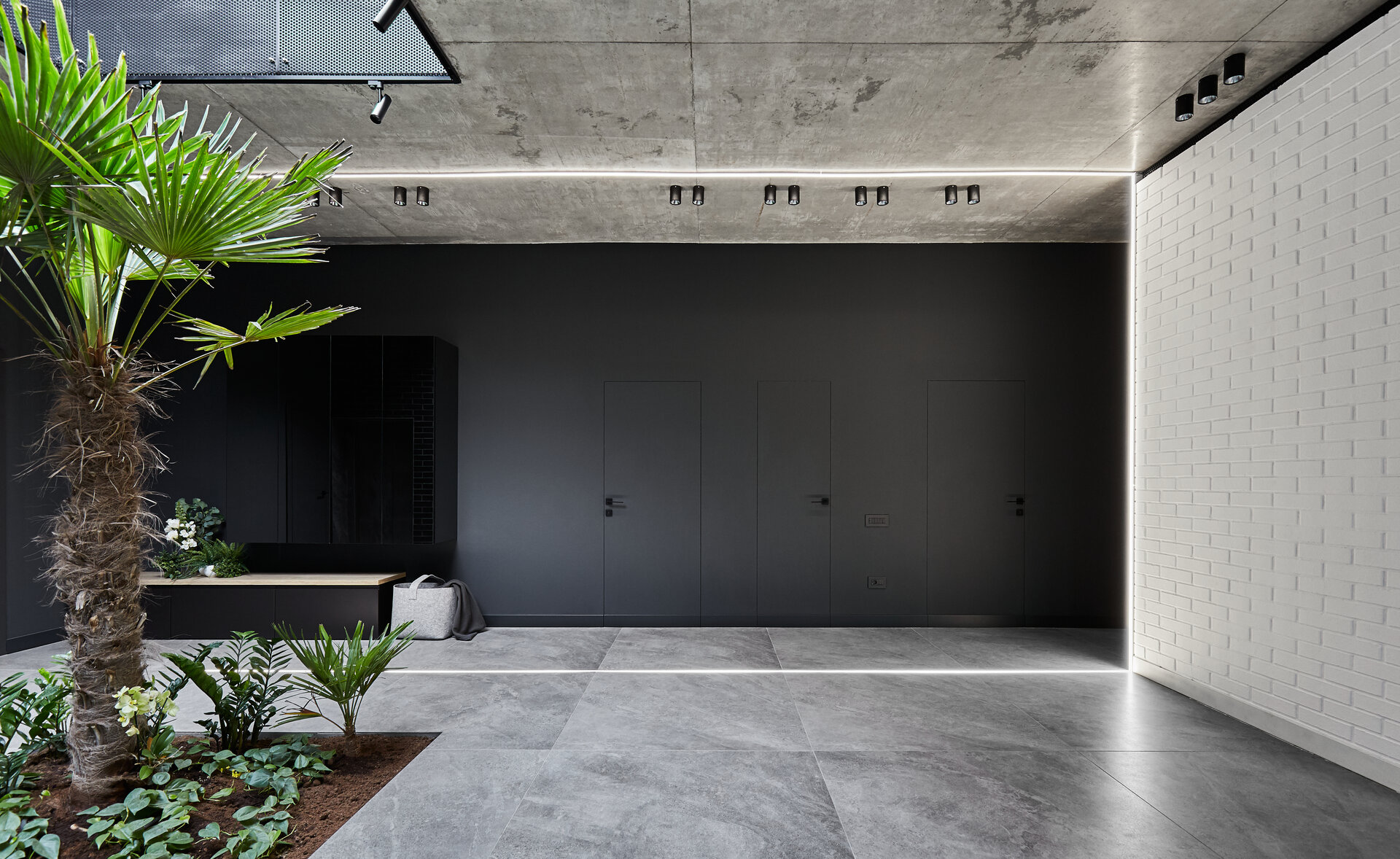 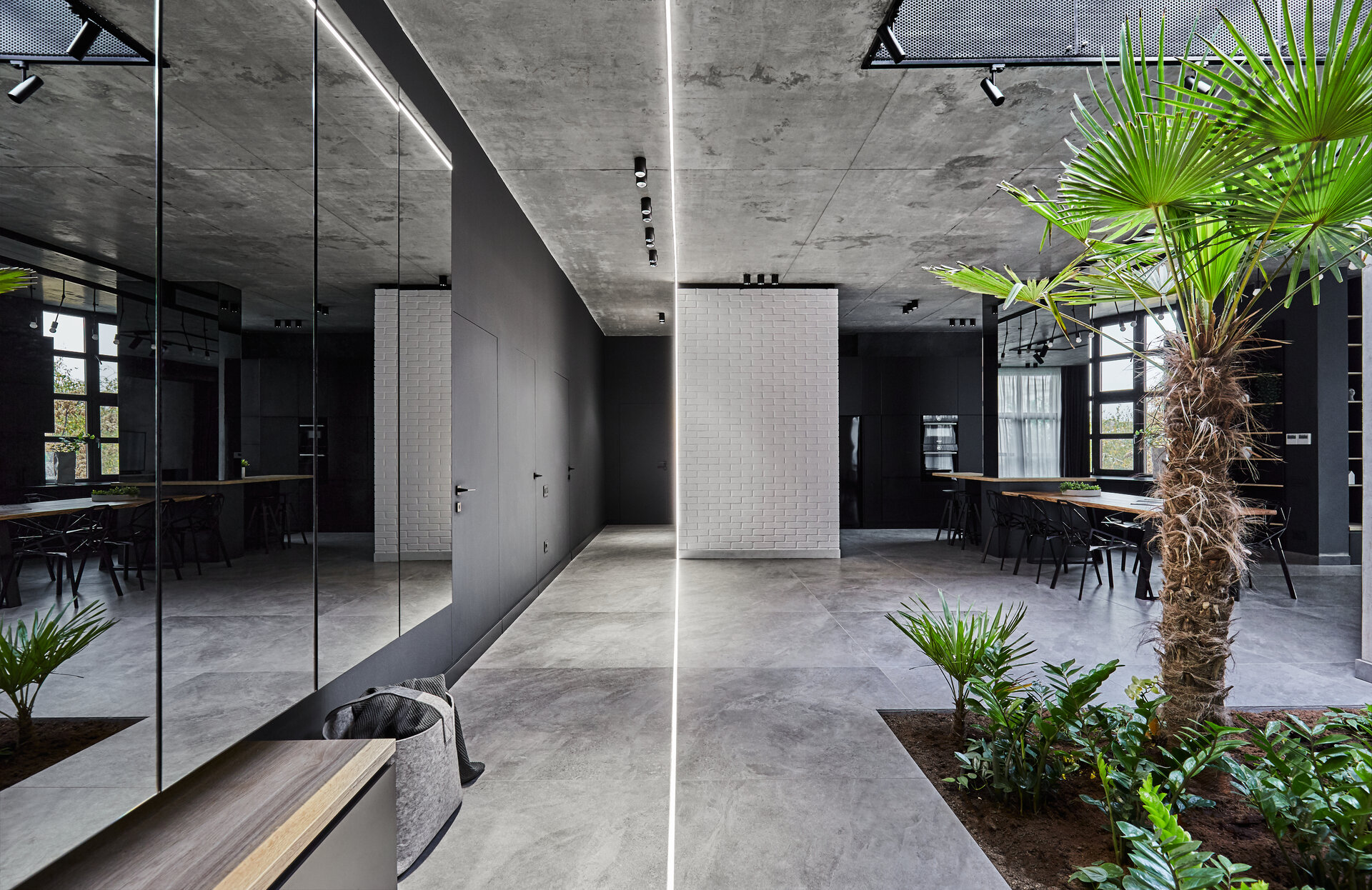 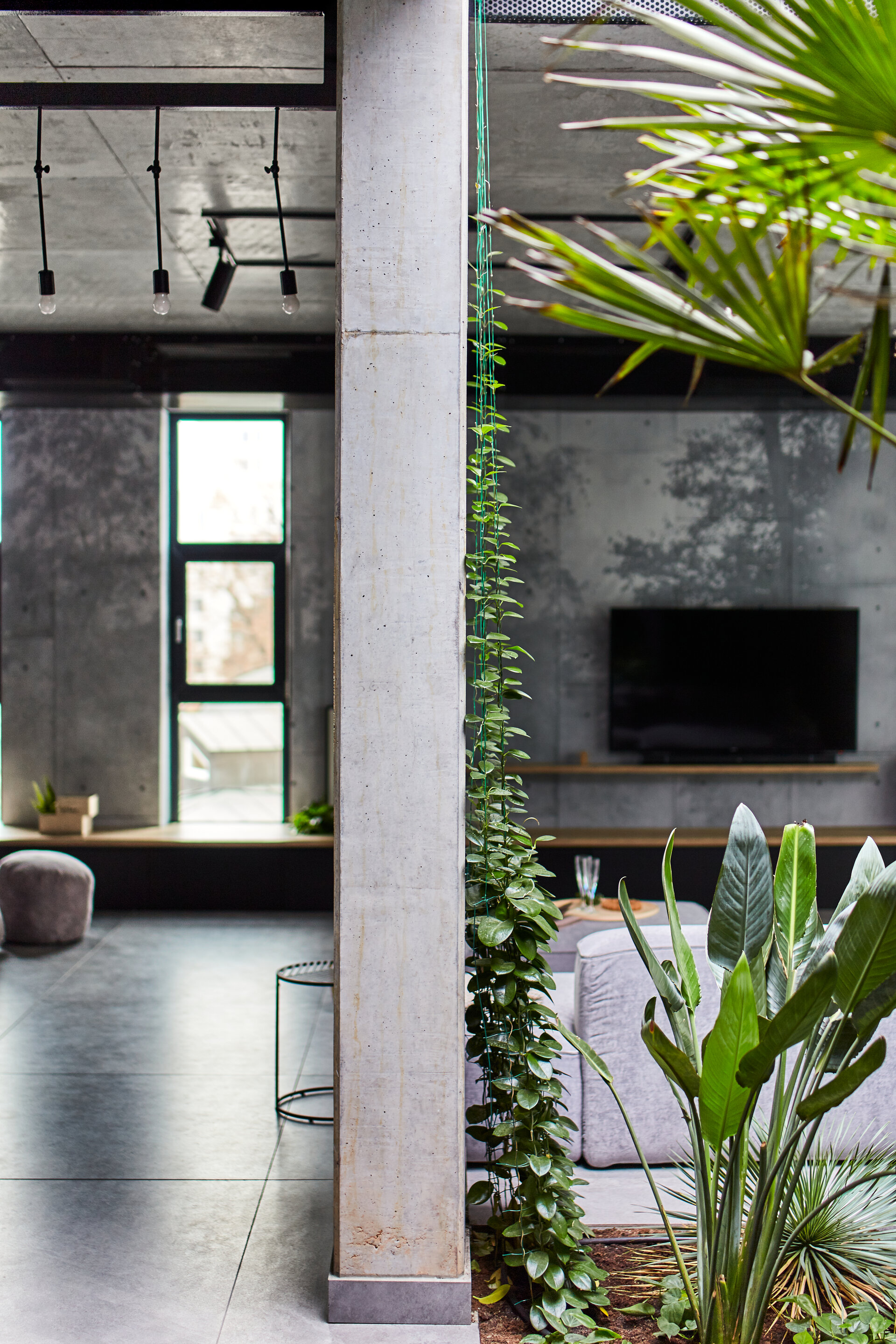 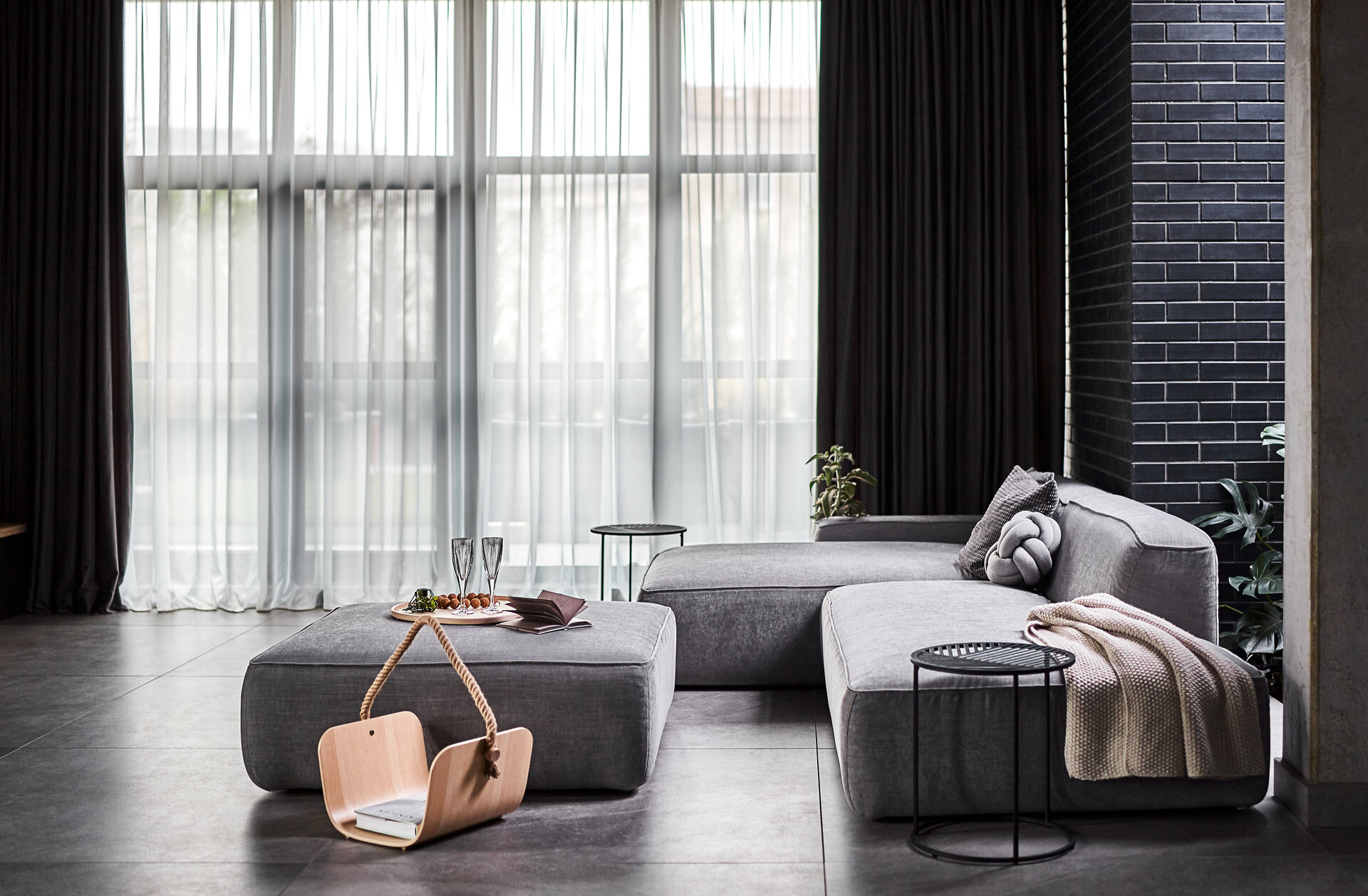 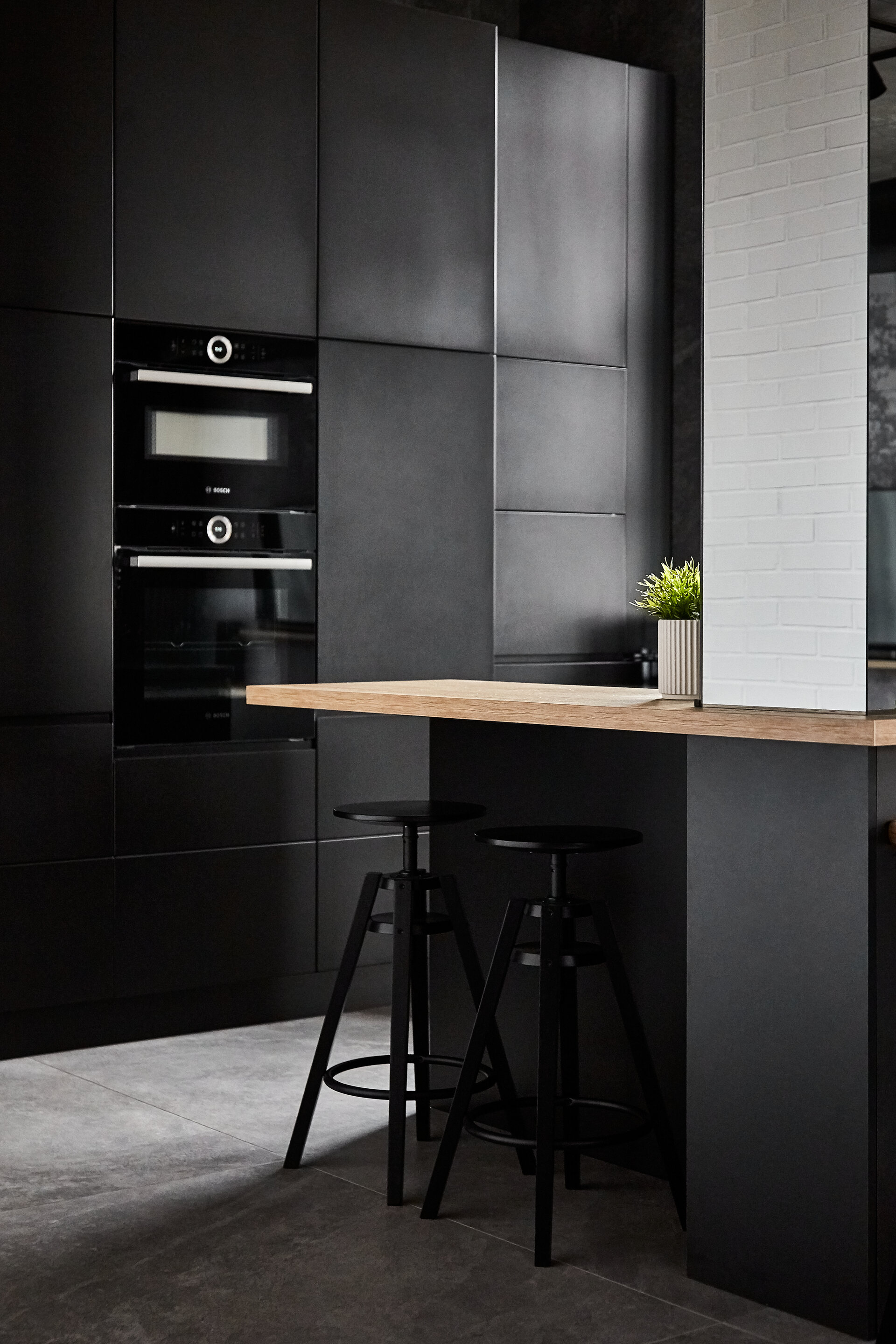