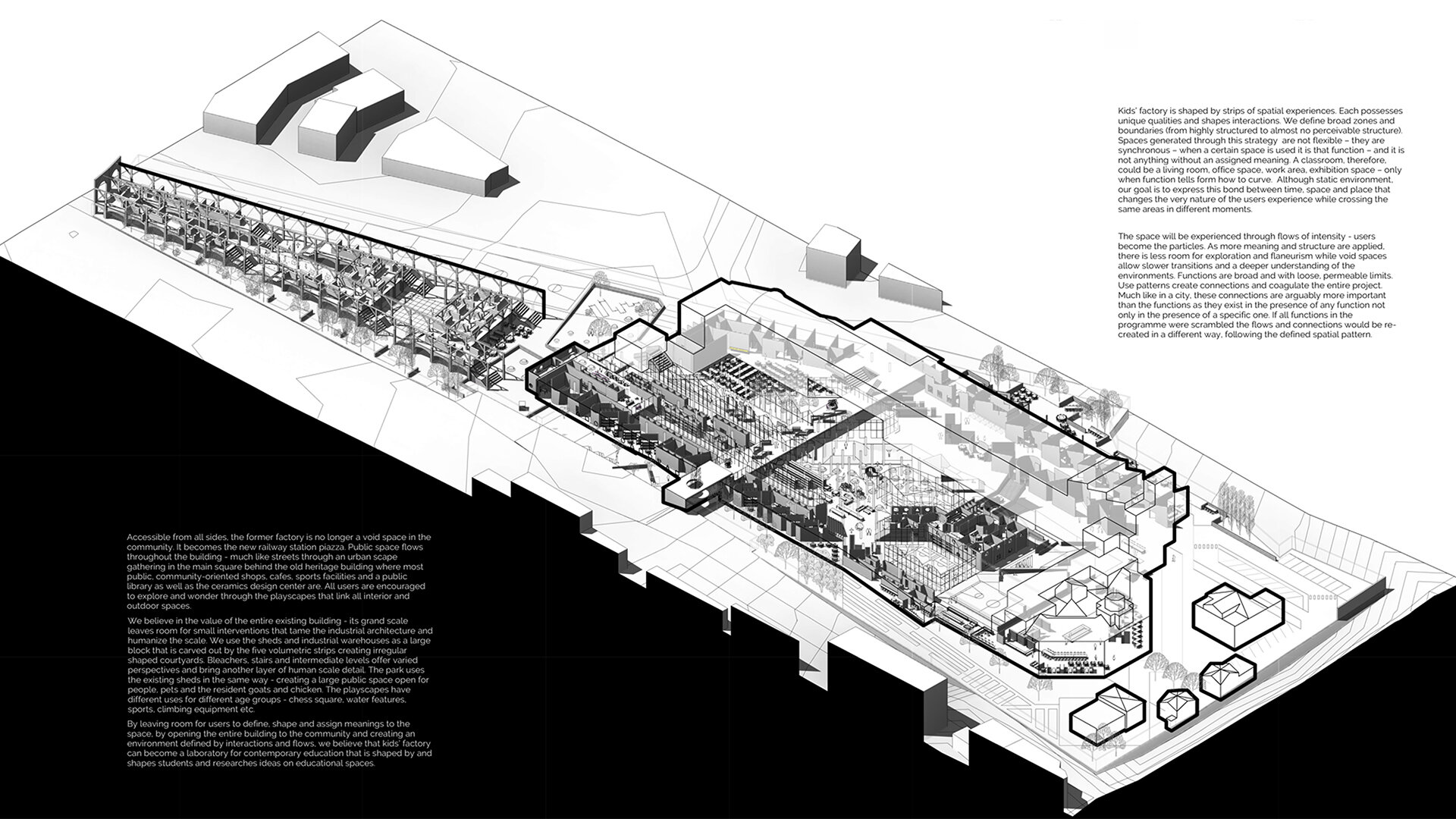 In an old, abandoned ceramic factory, near Milan, a new kindergarten, school, summer camp, and educational research laboratory were to take shape. Our take was to blur the lines between each, make them work together and share spaces:

Kid’s factory is shaped by strips of spatial experiences. Each one possesses unique qualities and shapes interactions. We define broad zones and boundaries (from highly structured to almost voids). Spaces generated like this are synchronous – meaning that when certain space is used it becomes that particular function. It is void without meaning. A classroom could be a living room, office space, work area, exhibition space – only when function tells form how to curve. Although static, our goal is to express this bond between time, space, and place that changes the nature of the users’ experience.
We believe in the value of the entire existing building – its grand scale leaves room for small interventions that tame the industrial architecture and humanize the scale. We use the building as a large block that is pierced by five strips and irregularly shaped courtyards. The park uses the existing sheds similarly – creating a large public space, open for people, pets, and the resident goats and chicken.

Everything is meant to be experienced through flows of intensity where users are particles. Functions are broad and with loose, permeable limits. User patterns create connections. Much like in a city, these connections are arguably more important than the functions, as if we were to scramble uses, the flows and connections would be recreated in a completely different way creating a new experience.

We believe the world we have built is guided by individualism, consumption, and competition. It provokes suffering and poverty. We believe we must strive for equality, communitarianism, and supportiveness to create wellbeing and welfare. A school should help shape students to take a stance against inequality and are sensitive to others. We believe these values should be integrated into the design.

We believe schools aren’t just buildings – architectural objects – but an environment that has multiple authors and designed by everyone, through their stories, memories, and own projections and that is a catalyst of change, not just a passive object. Architecture should not be fixed, immutable, and permanent but adaptive and resilient. We aim for moving the perspective from the architect as Creator towards the architect as a facilitator that empowers users to affect the utility and design of the building. 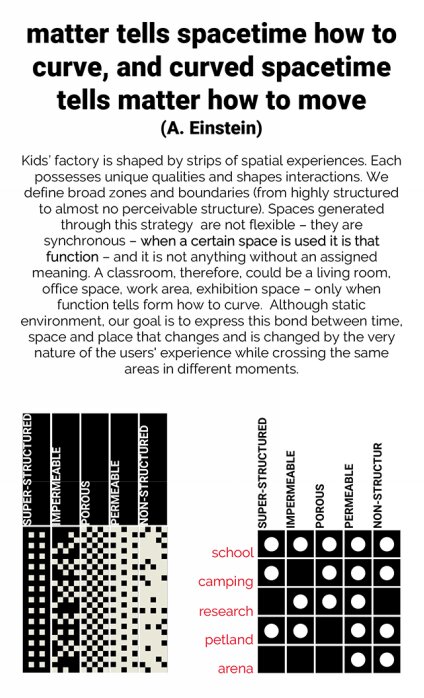 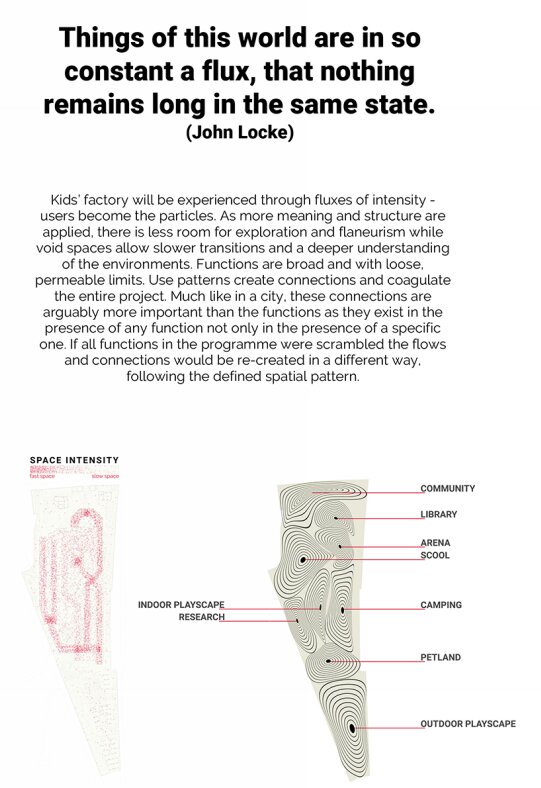 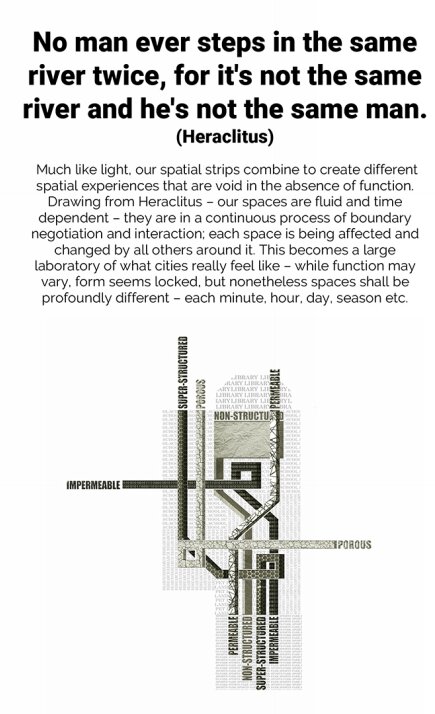 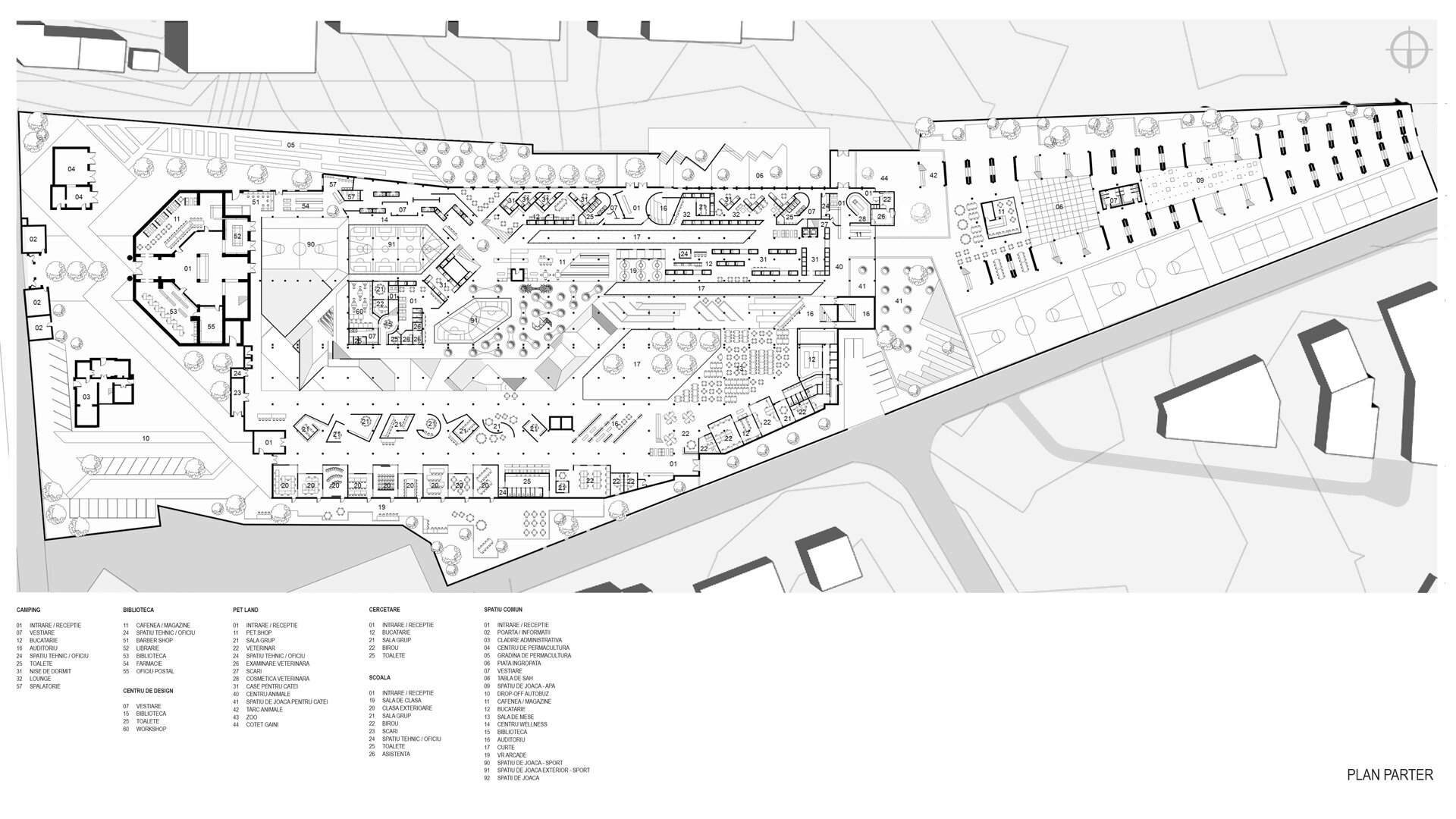 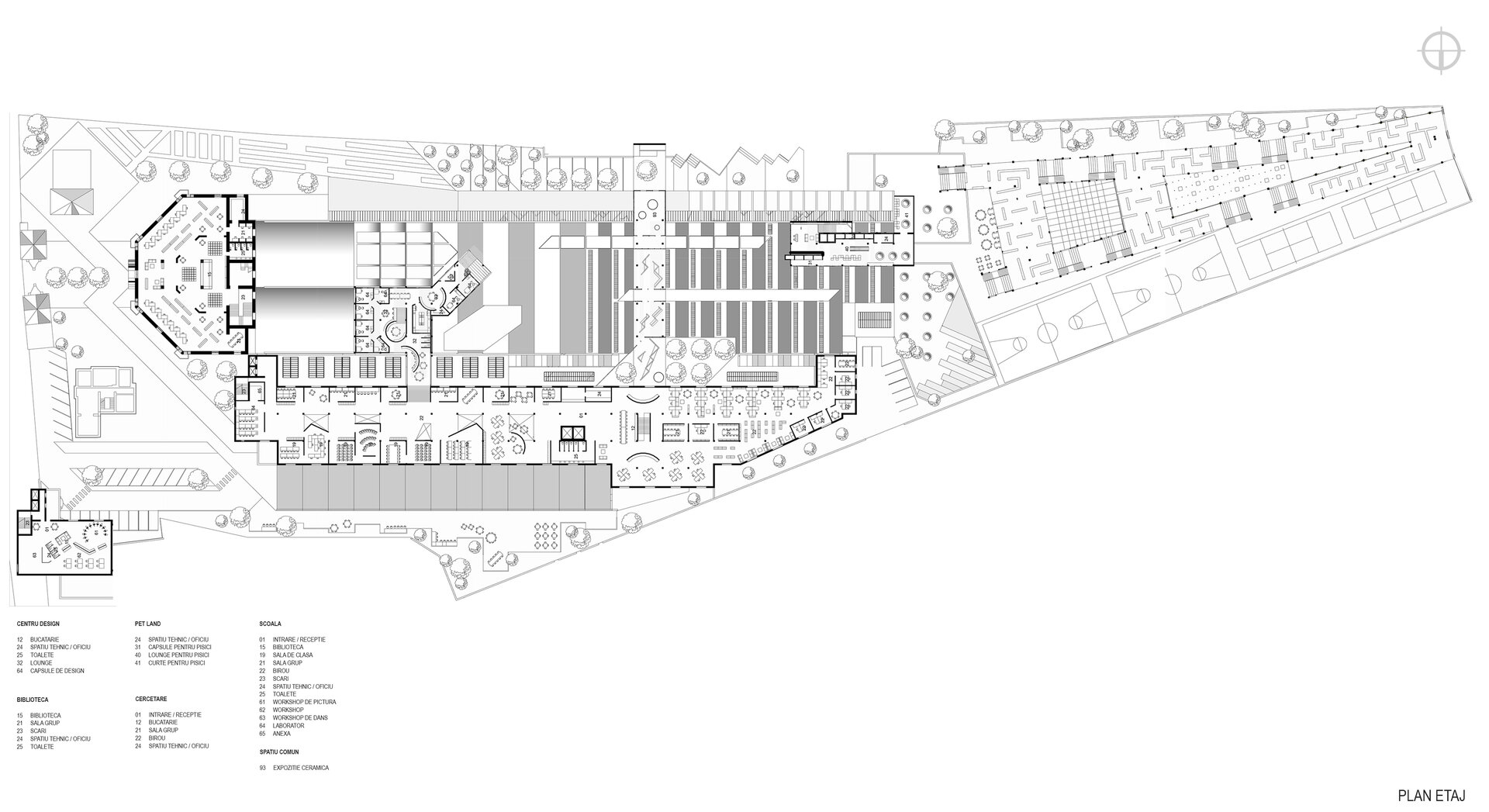 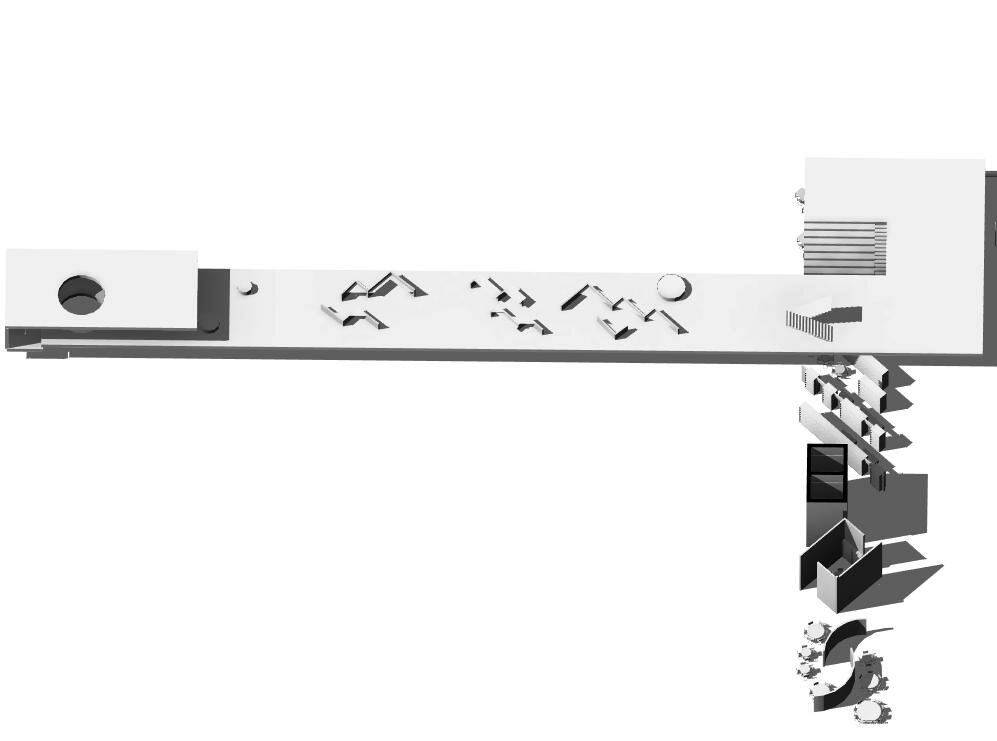 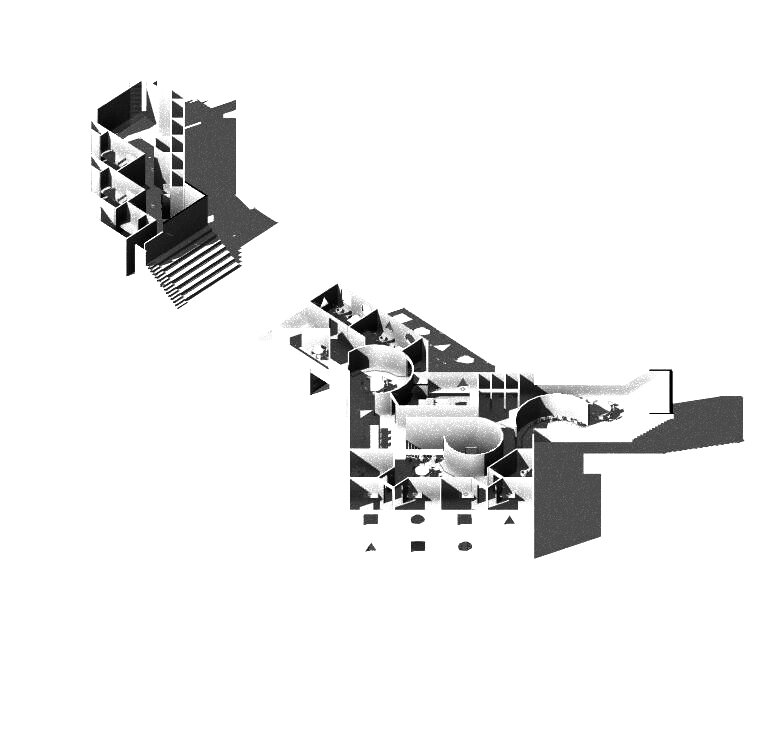 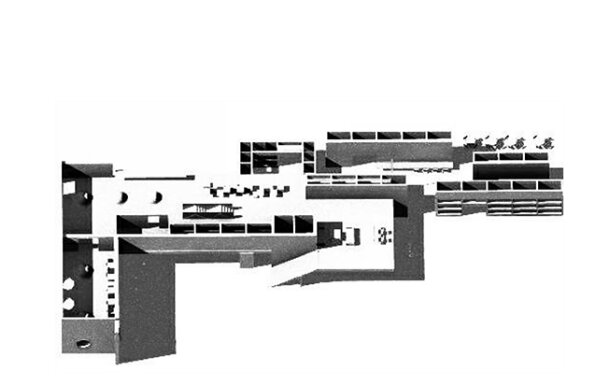 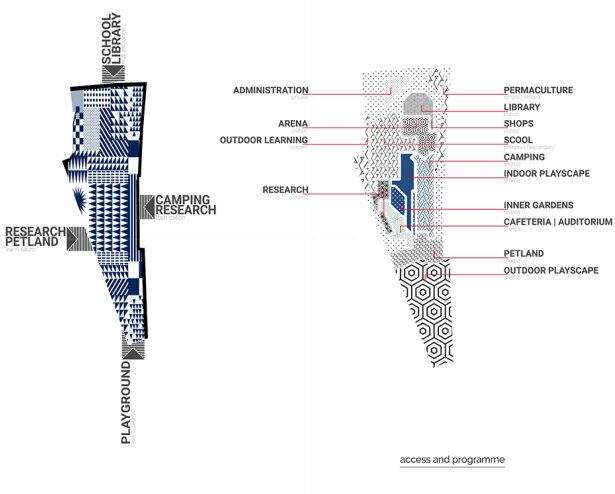