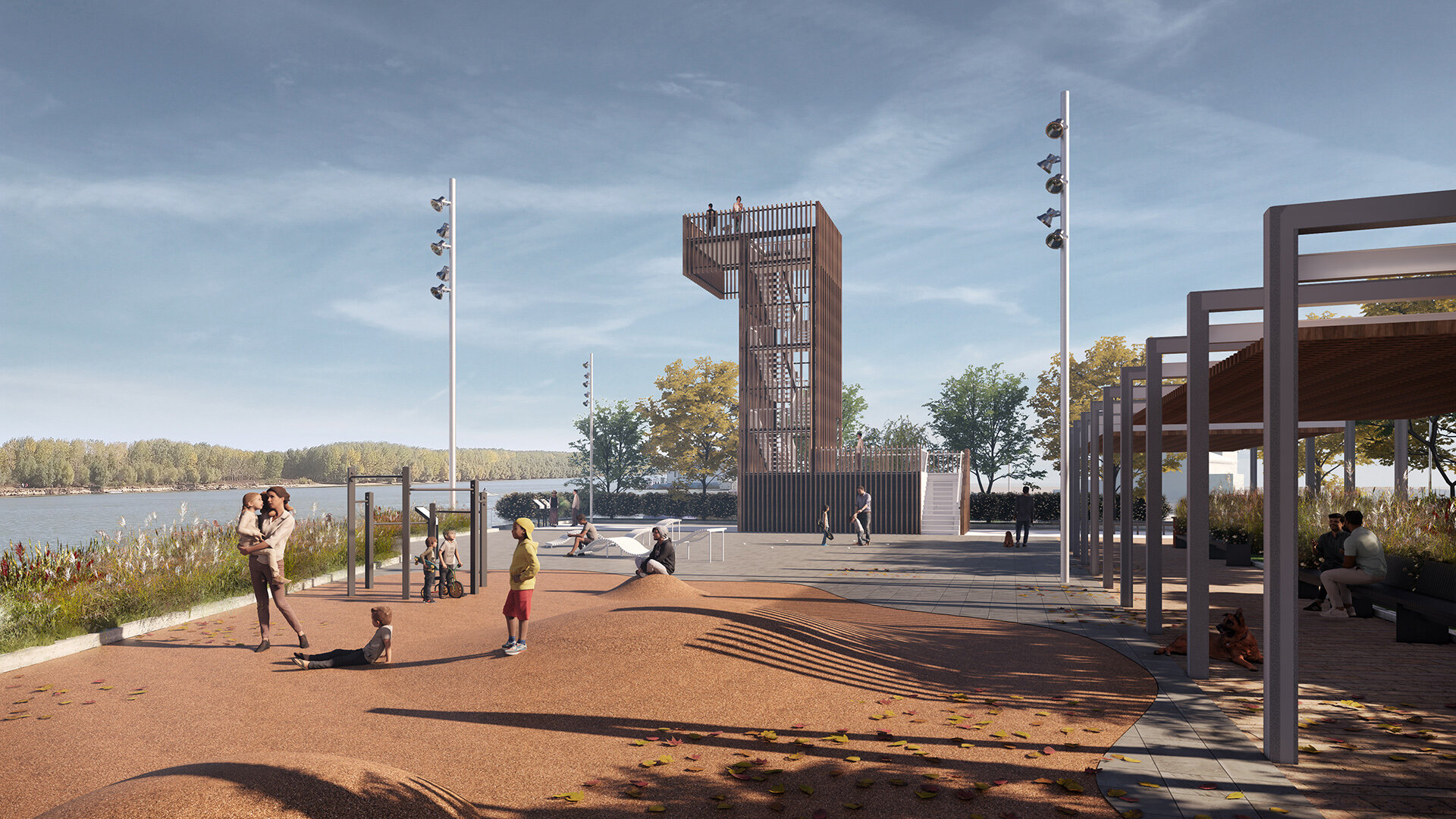 Promenade on the Danube bank at Mahmudia

Mahmudia is a small settlement on the edge of the Danube Delta. In addition to the picturesque atmosphere, specific to the small rural communities in the Delta, the commune also benefits from a very good accessibility that generates an increased traffic in tourism and a potential for the development of the settlement into a main gate to the Delta. In order to realize this potential, Mahmudia must first develop its infrastructure. To this aim, Mahmudia initiated this project for developing its waterfront as an attractive and socially inclusive public space, an active place, both for members of the local community and for various categories of tourists passing through.
In order to highlight this waterfront’s strengths and vocation, the design concept is centered on a public, multipurpose space composed of 3 functional areas, with different but complementary characteristics: Mineral Park, Communal Waterfront and Public Garden.
Mineral Park: From a geographical point of view, Mahmudia is the last point of contact between the Danube River and the hills of Dobrogea, and this detail is a strong element of local identity. Therefore, the design ephasizes the spectacular natural relief by proposing a Mineral Park, at the Western boundary of the waterfont, marked by spectacular rock formations that extend to the contact with the the river. The design of the mineral park is accessible to both typical users and to those with locomotor disabilities. The main components of the park are the belvedere platform, the suspended ramp that descends to a point of contact with water and the amphitheater on the banks of the Danube, which offers a panoramic view of the entire park.
Communal Waterfront: To the East of the Mineral Park, the central part of the waterfront has the vocation of a central public space for the commune, a promenade on the Danube. The Communal Waterfront is the most complex part of the proposed arrangement. Thus, for its design, both infrastructure works and shore defense (terraces, retaining walls), as well as public space and community space designs are taken into account. Also, this area is equipped with a playground for children, a multifunctional pavilion and an observation tower for amateur ornithologists.
Public Garden: The proposed intervention on the waterfront ends in the Eastern part, by designing a public garden, on the banks of the Danube. Through a minimal intervention that preserves the atmosphere of the natural shore, specific to the Danube Delta, the design is limited to the creation of minimal access alleys, made of gravel and stabilized sand and landscape proposals, based on endemic plants, complete with signaling and tourist information panels, about the local fauna and flora. 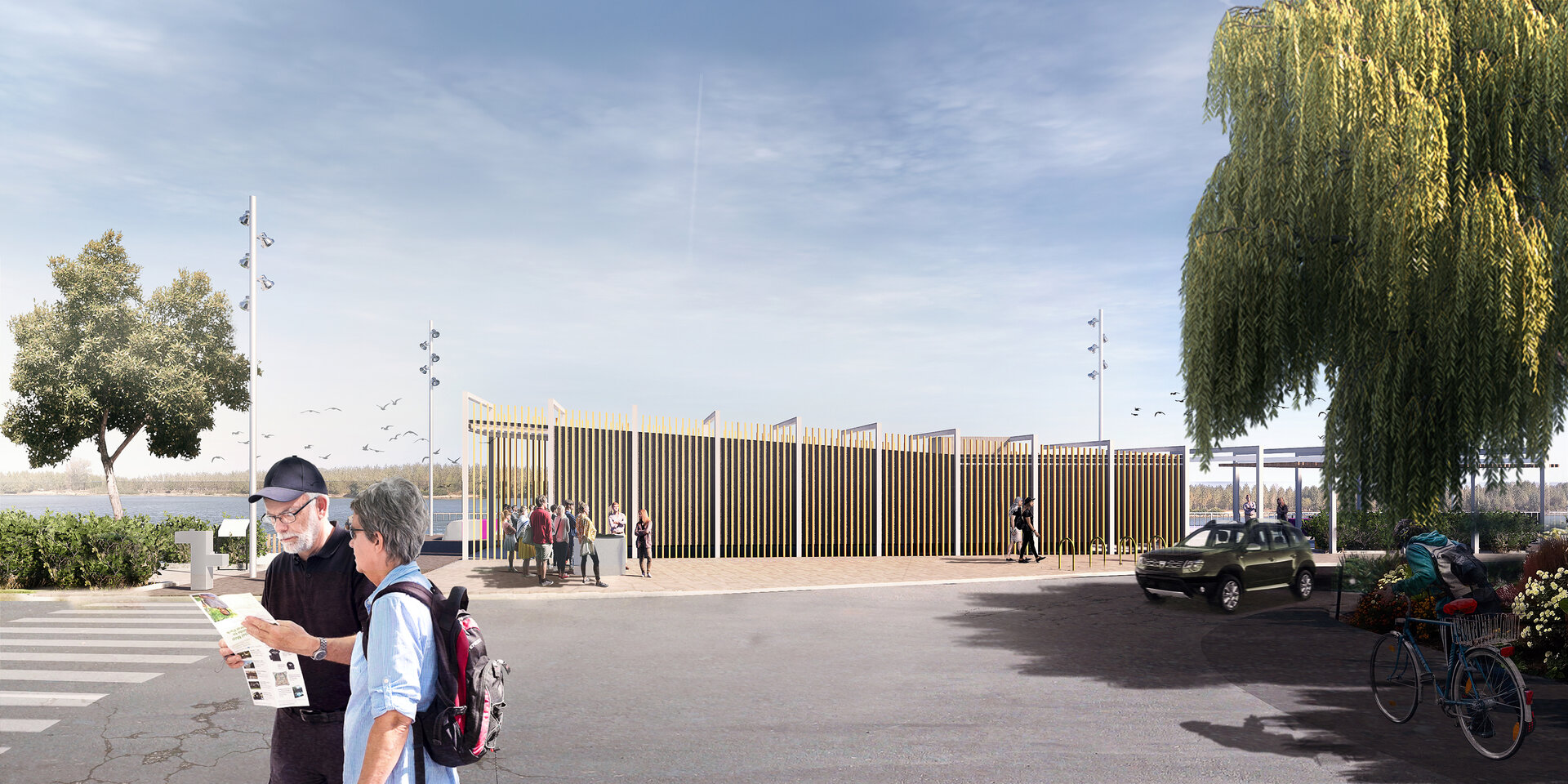 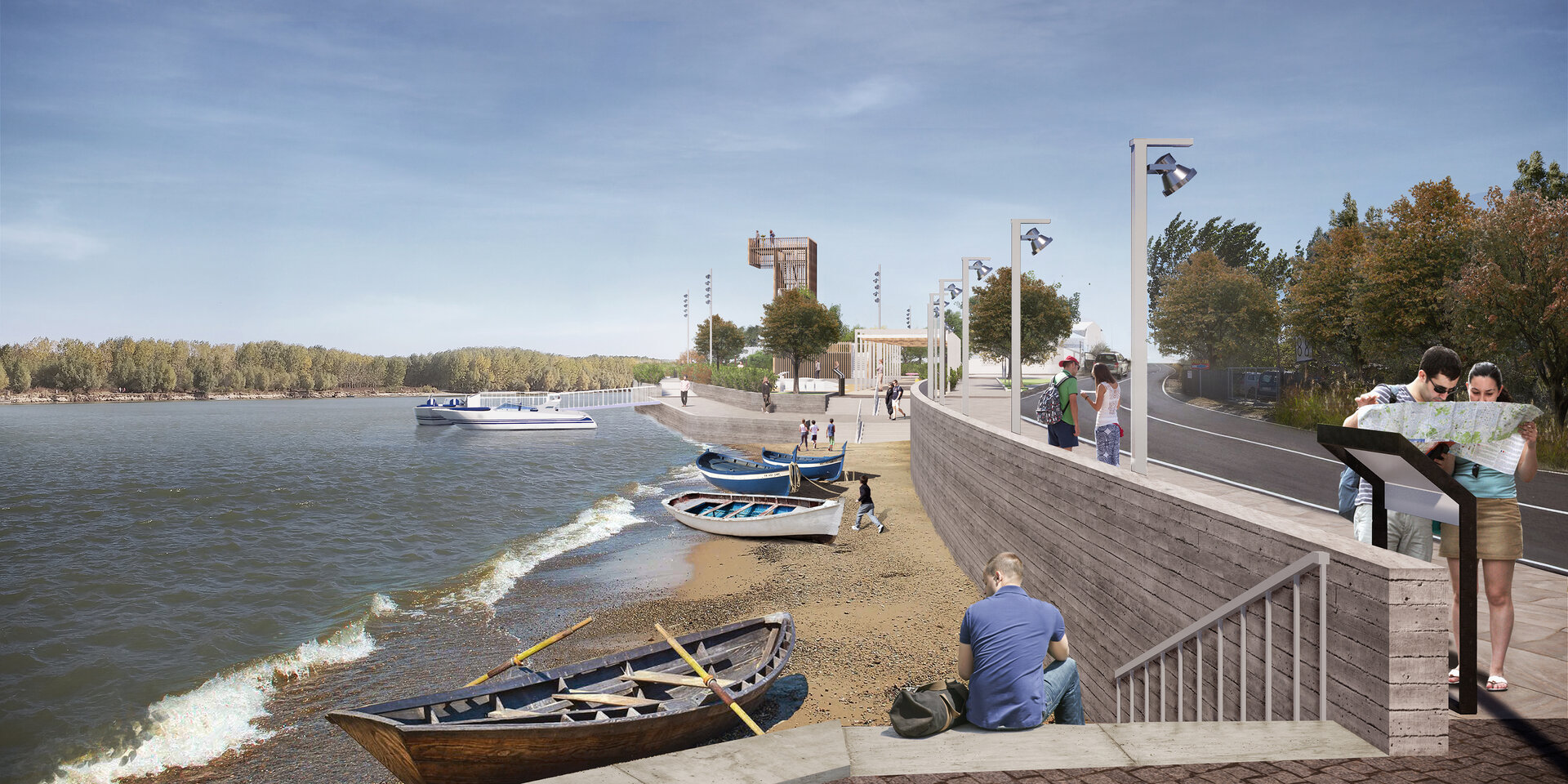 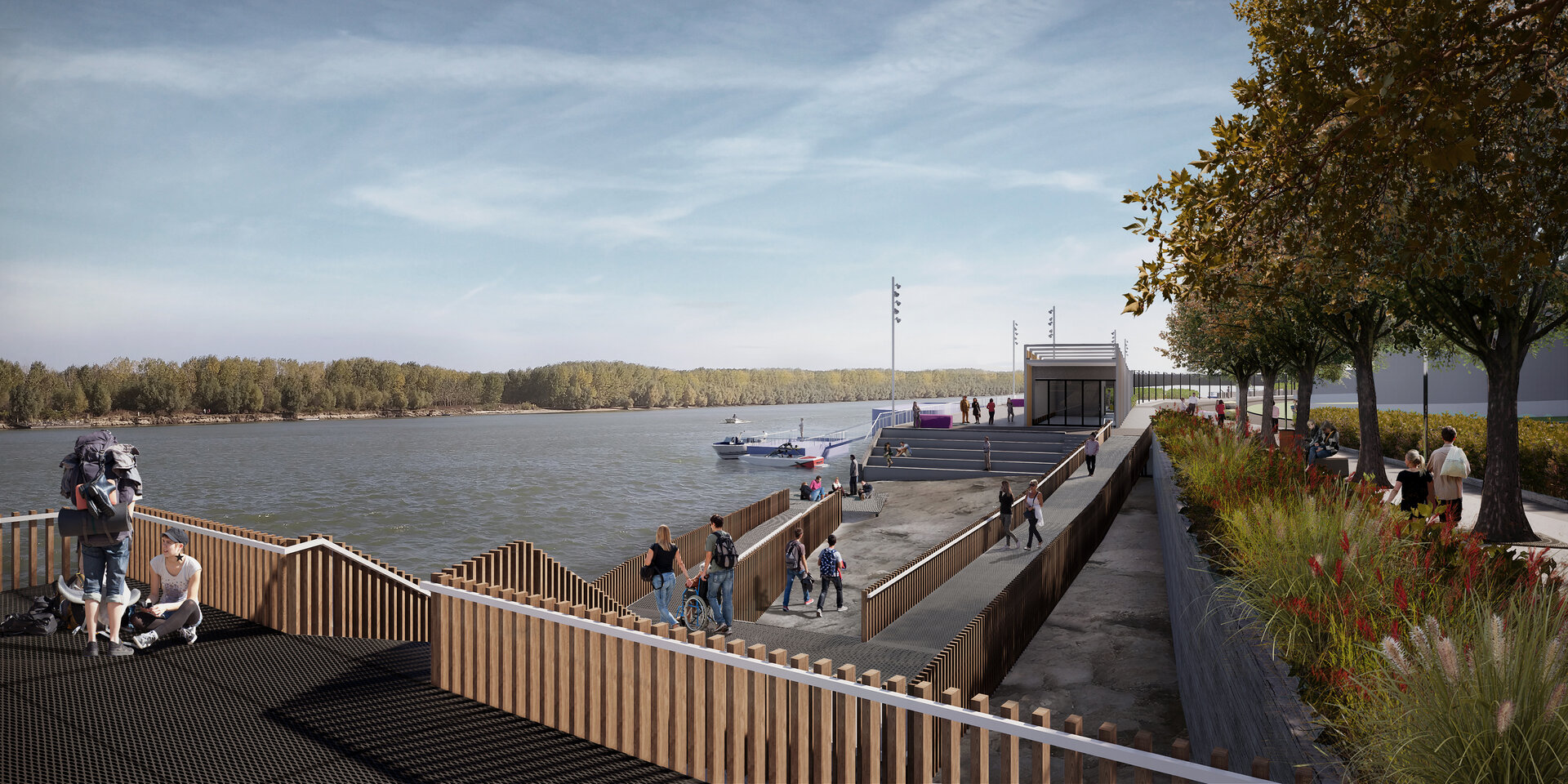 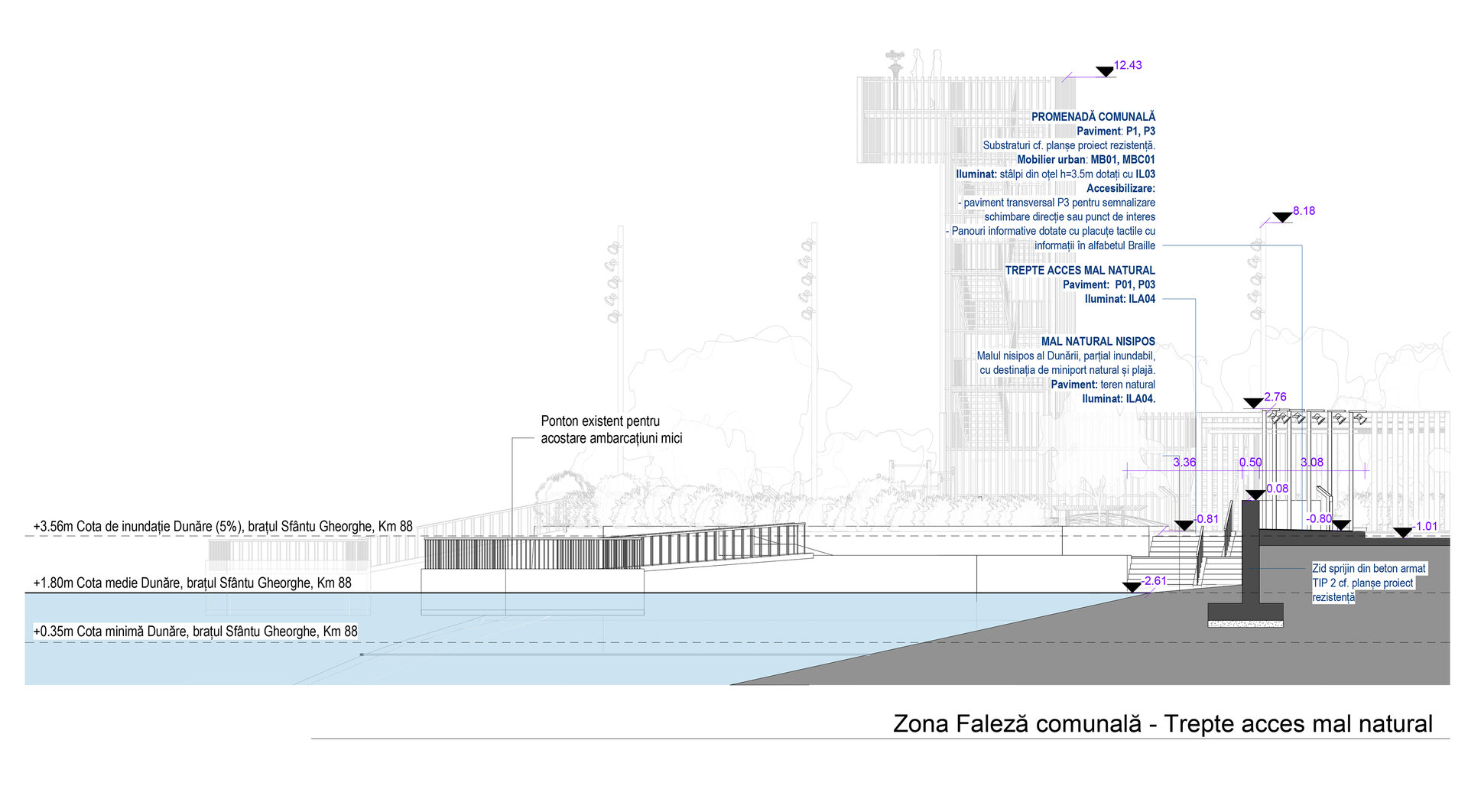