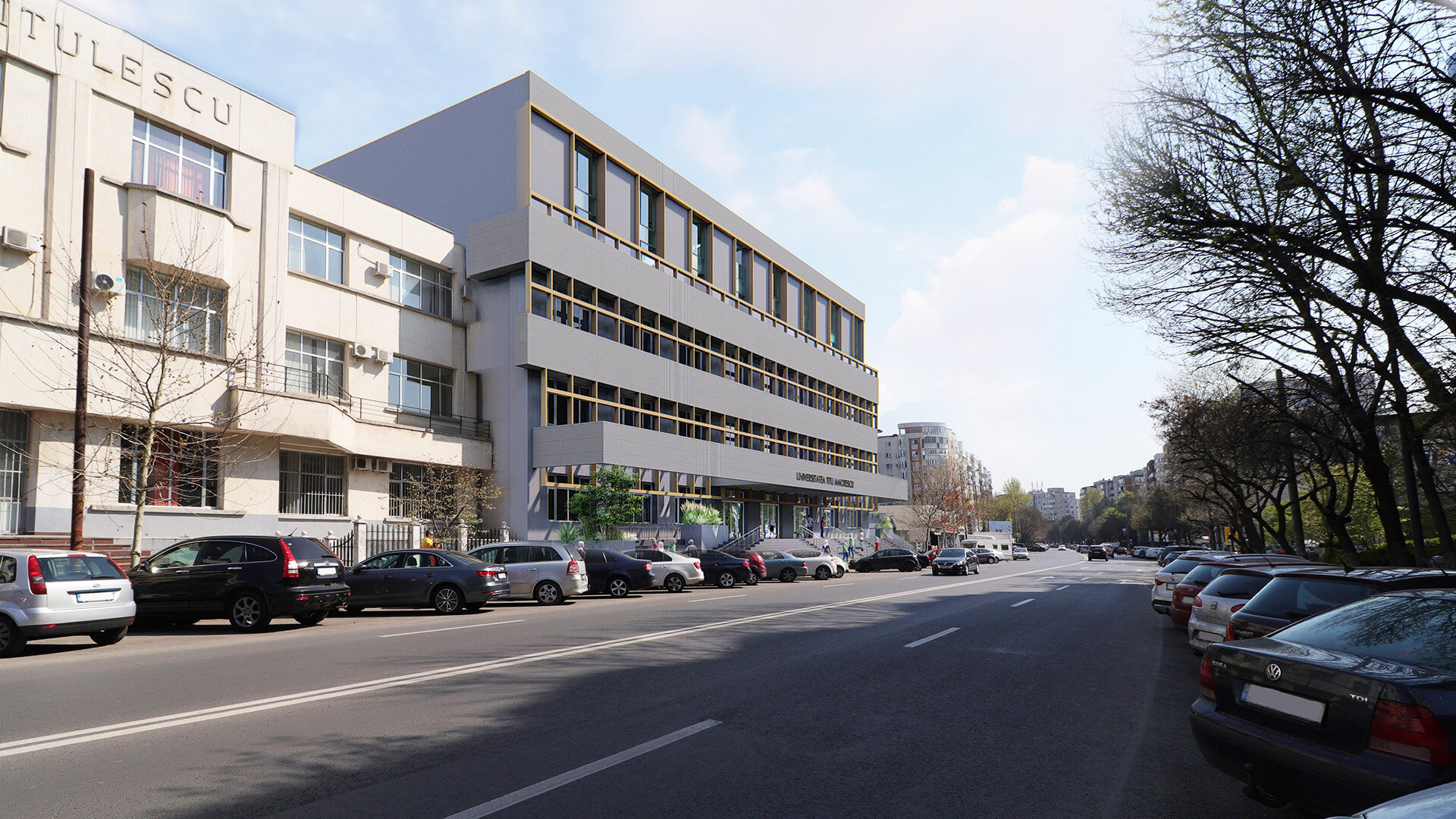 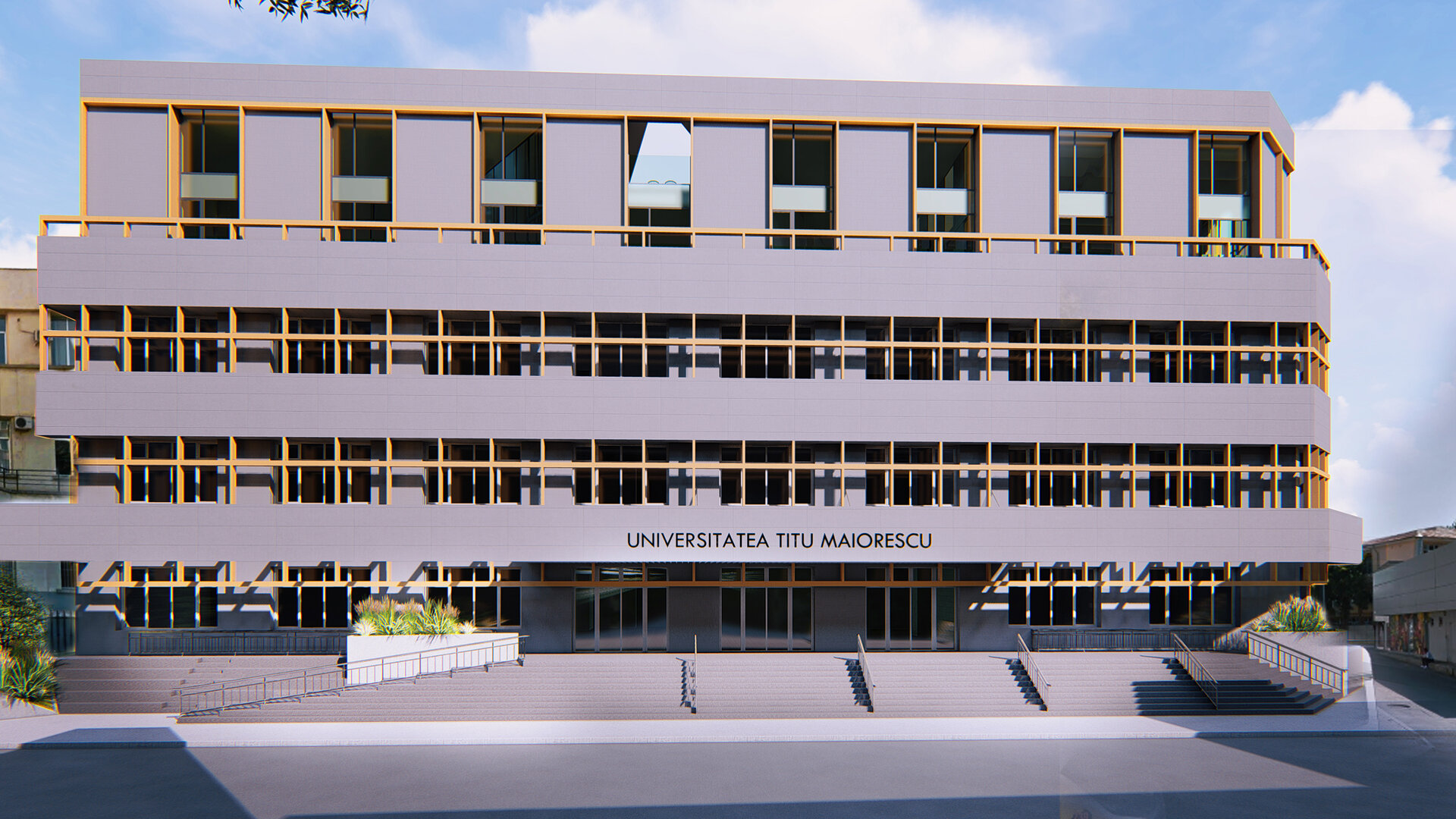 The project represents an extension for one of well-known private prestige universities in Romania. The project’s aim was to extend and modernise the existent building with a ground floor built area of 1,308 sqm, and to create a milestone intervention in the centre of Bucharest.
The existing building was erected in the early ’90s, in a downtown location in Bucharest, over an old existing concrete foundation, from the communist era. An interesting aspect consists of the old communist structure itself. This structure was realized in the North Korean building style of the former regime – a store-factory for the people in the surrounding area. At that time, the communist regime planned to influence the living style of the people with the goal of controlling the population’s meals and food consumption. For this reason, in Bucharest, several common-dining centres were created, soon named “Hunger Circus” in the population’s slang. The structure itself was designed at the highest standards regarding stability and seismic reaction. For example, the structural calculation took into consideration loadings of 900 kg/sqm, and, due to this, in the early ’90s, transforming the building into university headquarters was simple and effective.
The later building of the university was realised with the economic and technical possibilities of those times, as available for a medium-sized public building, functional and effective for students and the needs of the university.
25 years later, extending and refurbishing this building occurred as a necessity for the present and future needs of the university. Starting from the architectural concept, the project’s general idea was to create a two and a half levels upper extension, over the existing building, based on a modern approach, transparency, and respect towards the environment and energy efficiency. A metallic structure similar to a container framework, was designed for the extension, placed and hanged over the existing concrete building. The exterior facades and volumes were designed to be covered with Equitone panels and high energy efficiency glass walls. The interior design was created as a high-tech industrial space combined with interrelated organic spaces. Additional amphitheatres, laboratories, classrooms, conference rooms were designed and finished with best quality materials. Natural light was one of the most important details of the extension’s design, choosing the main building facades’ positioning towards East, South, and West, so that the sunlight may reach all these spaces.
Seen from the outside, the new building expansion represents a remarkable presence in the wider picture of the built surroundings. 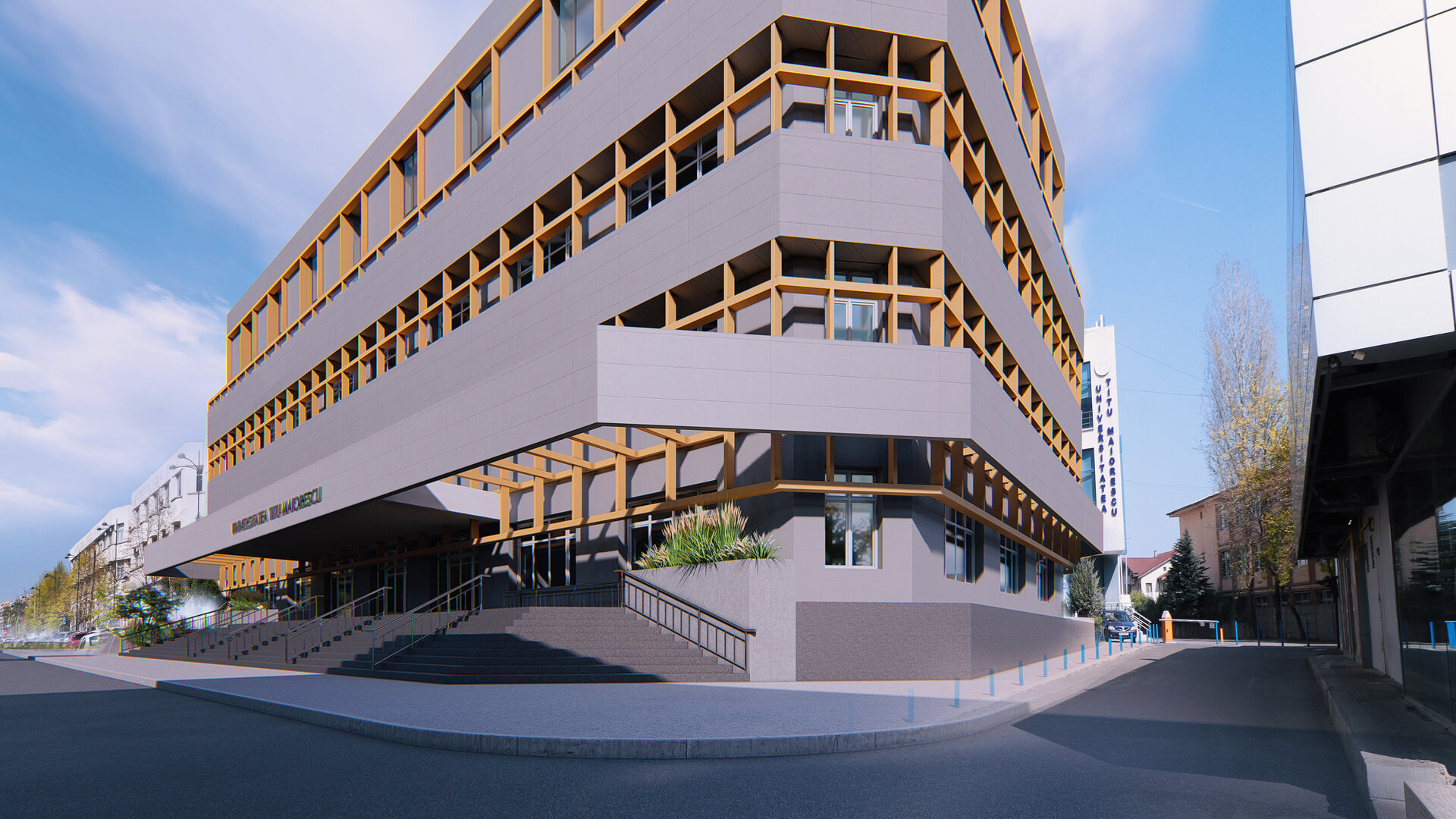 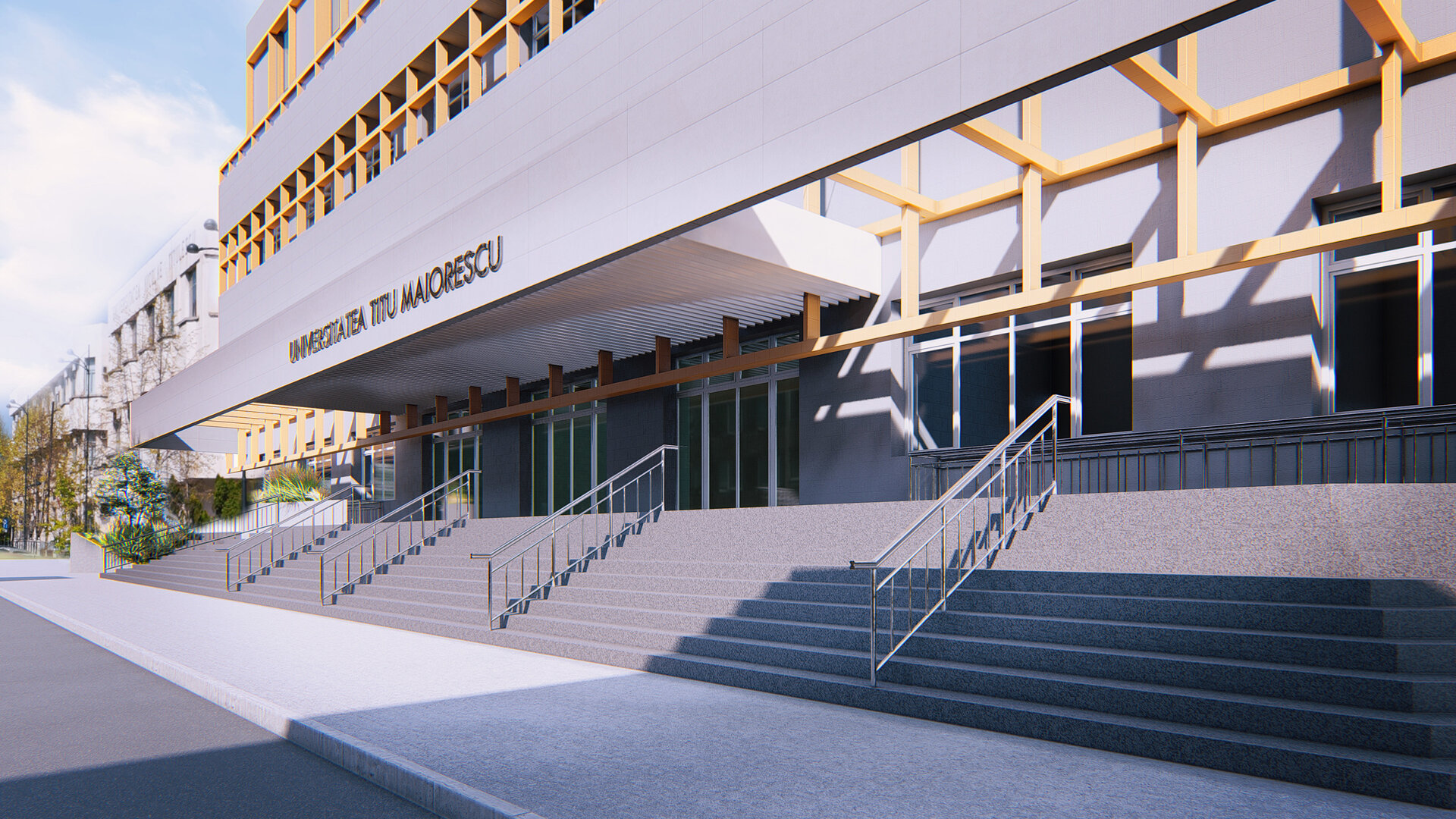 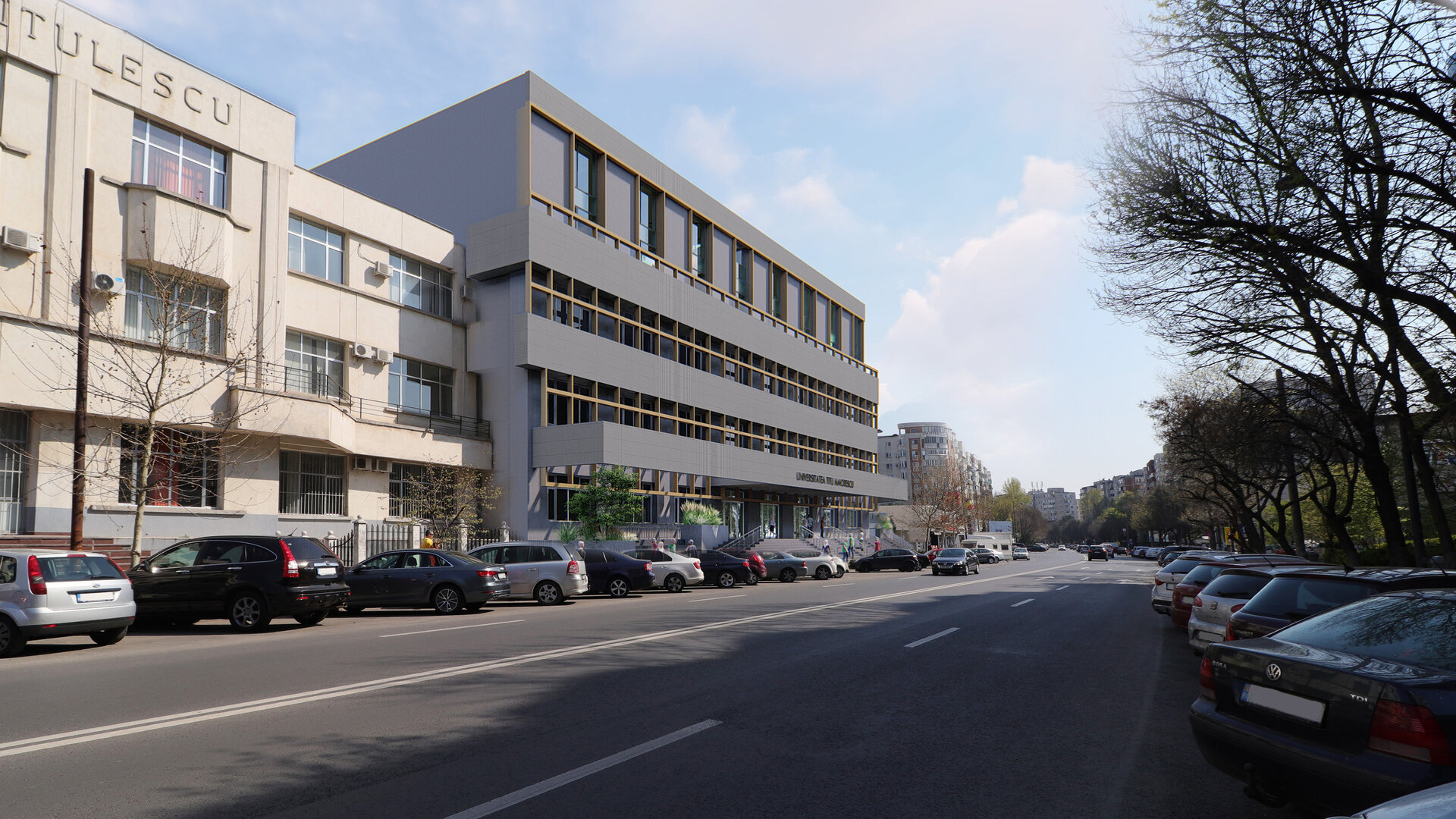 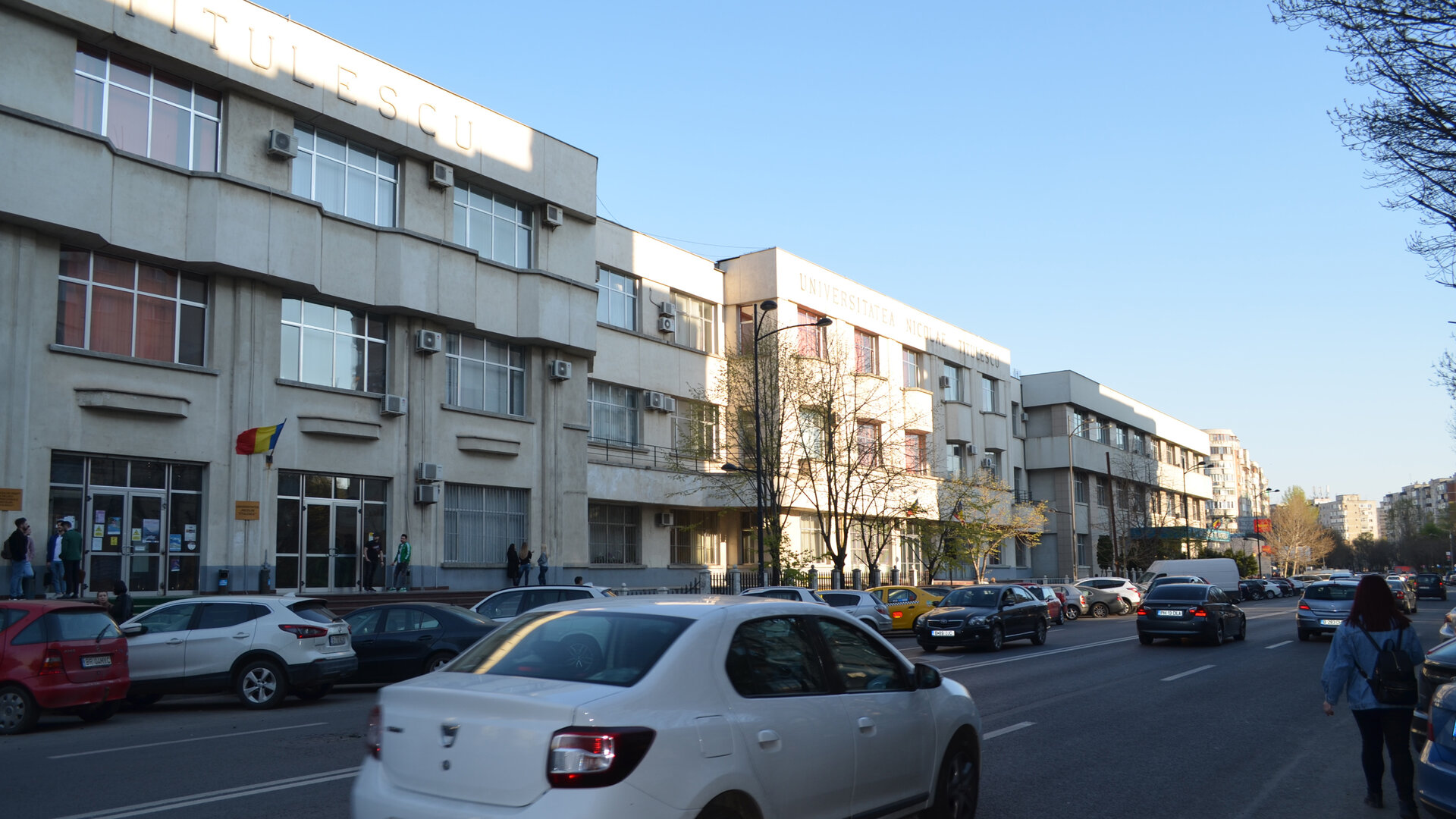 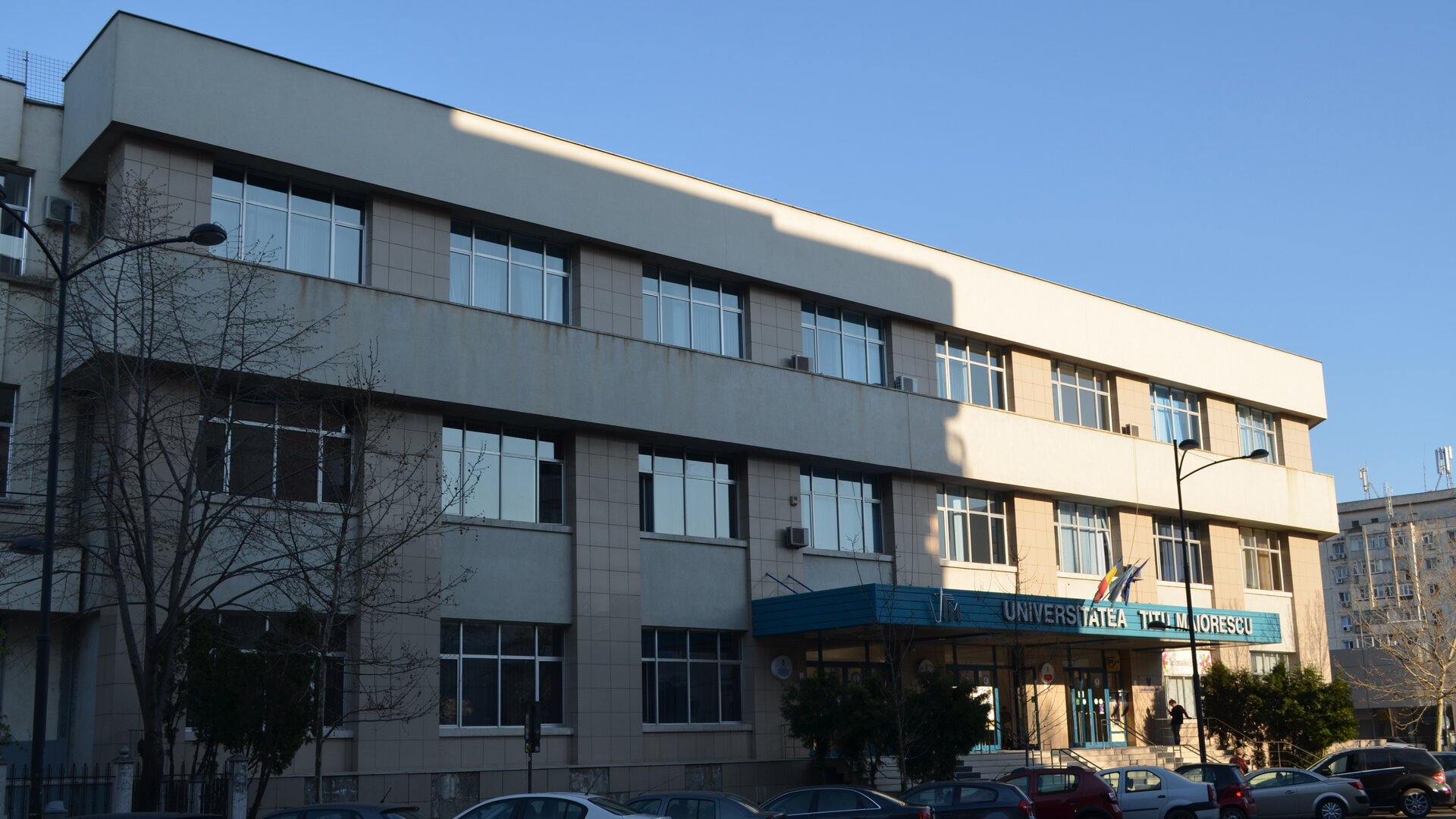 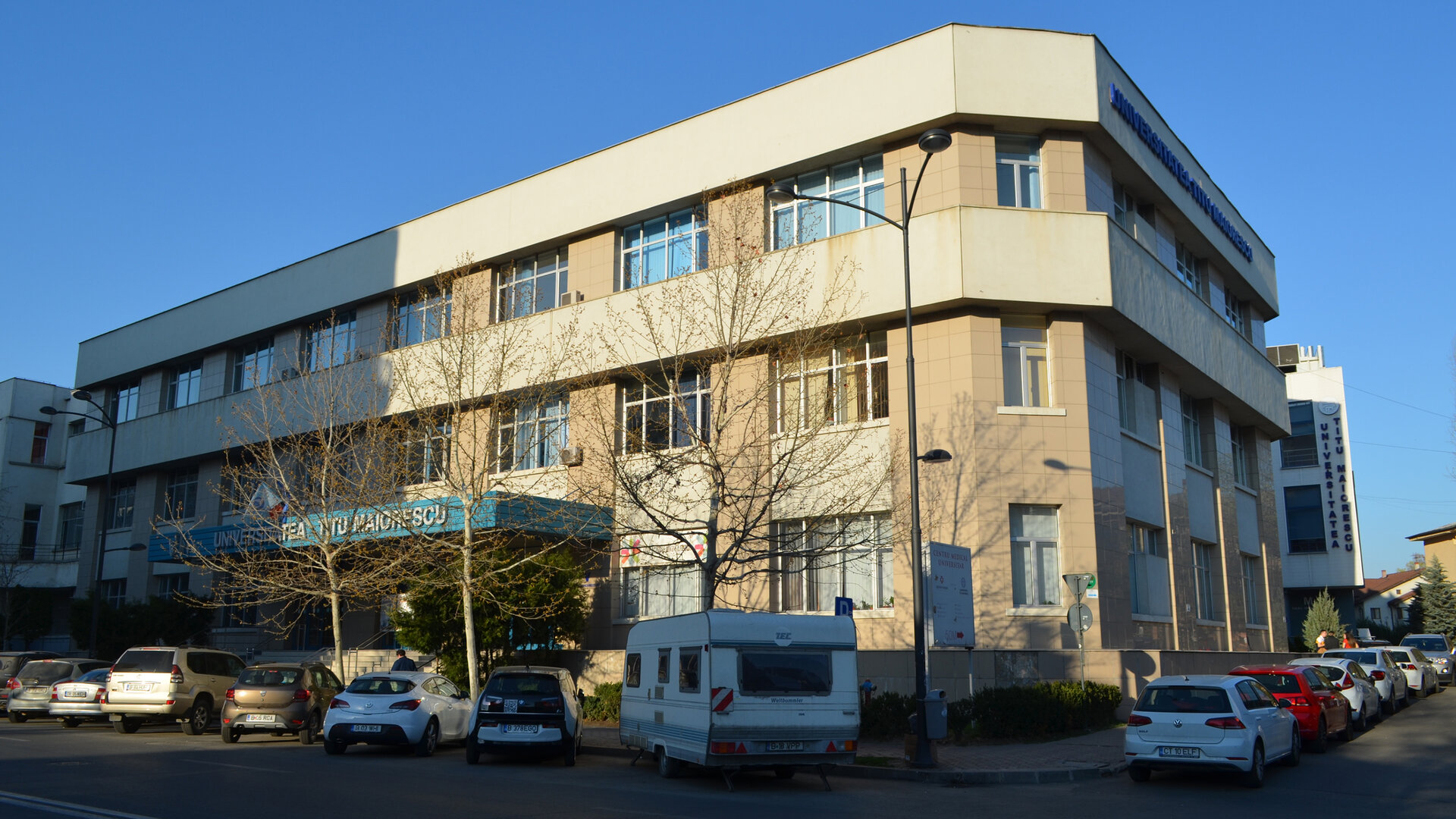 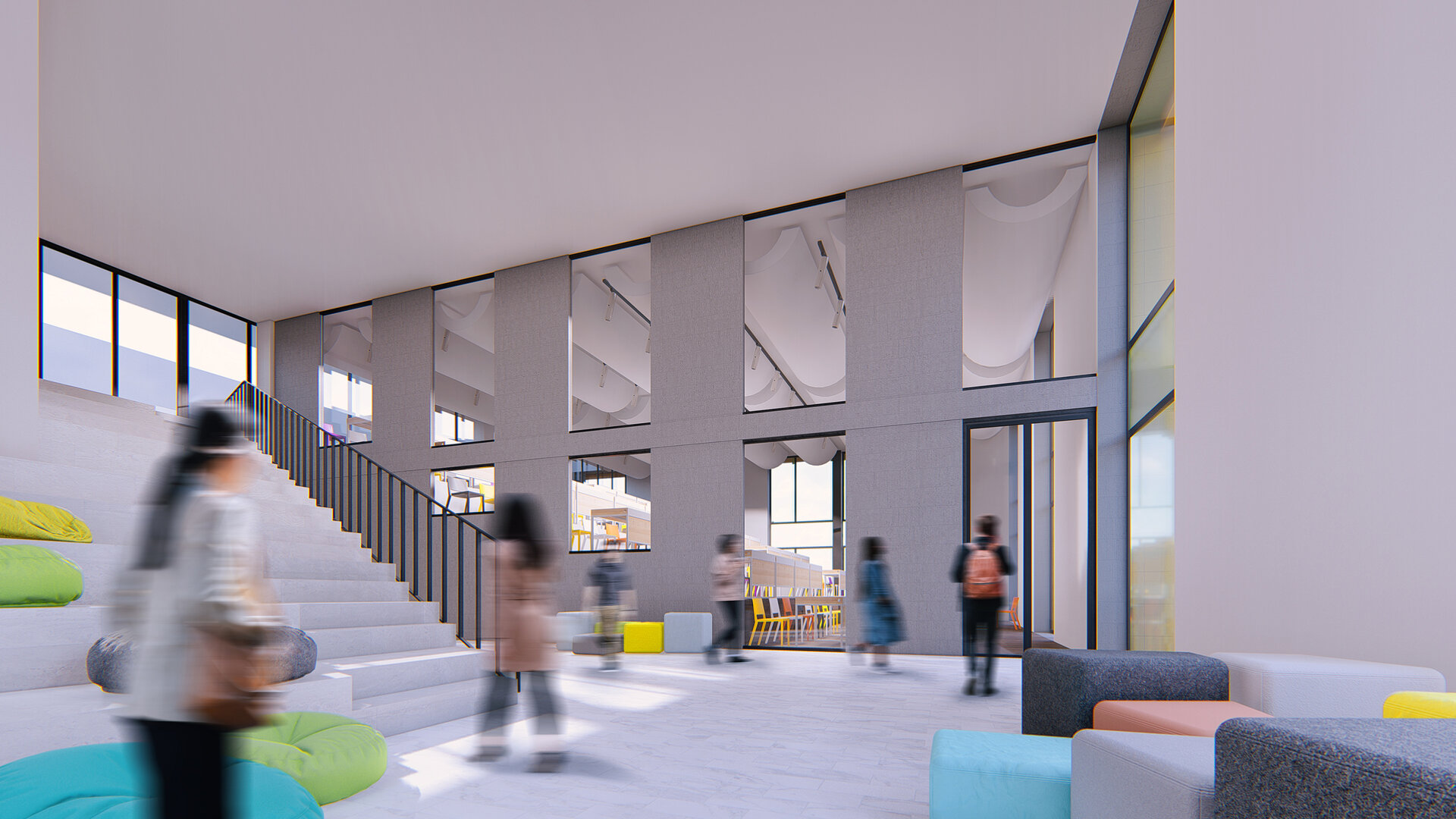 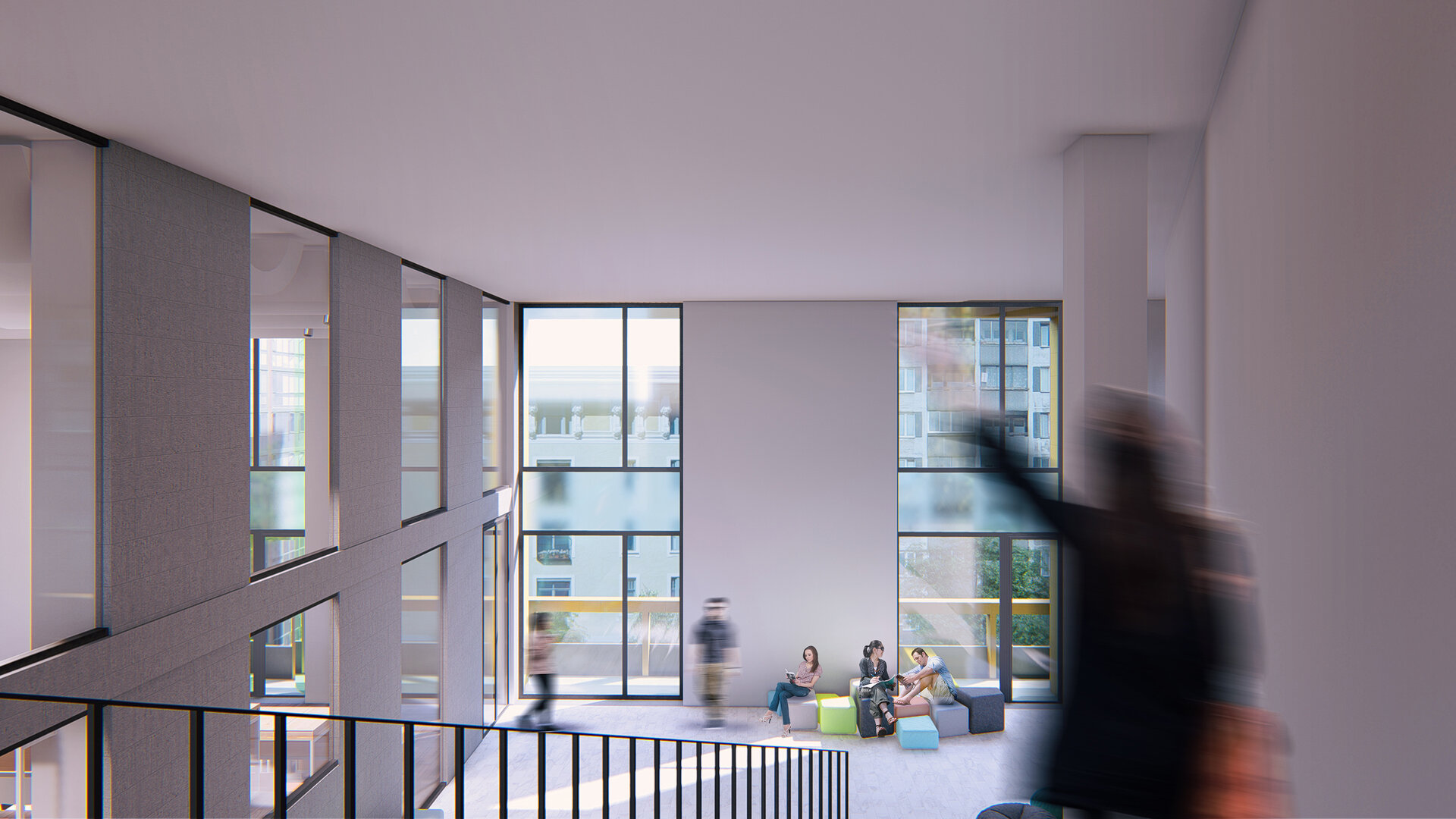 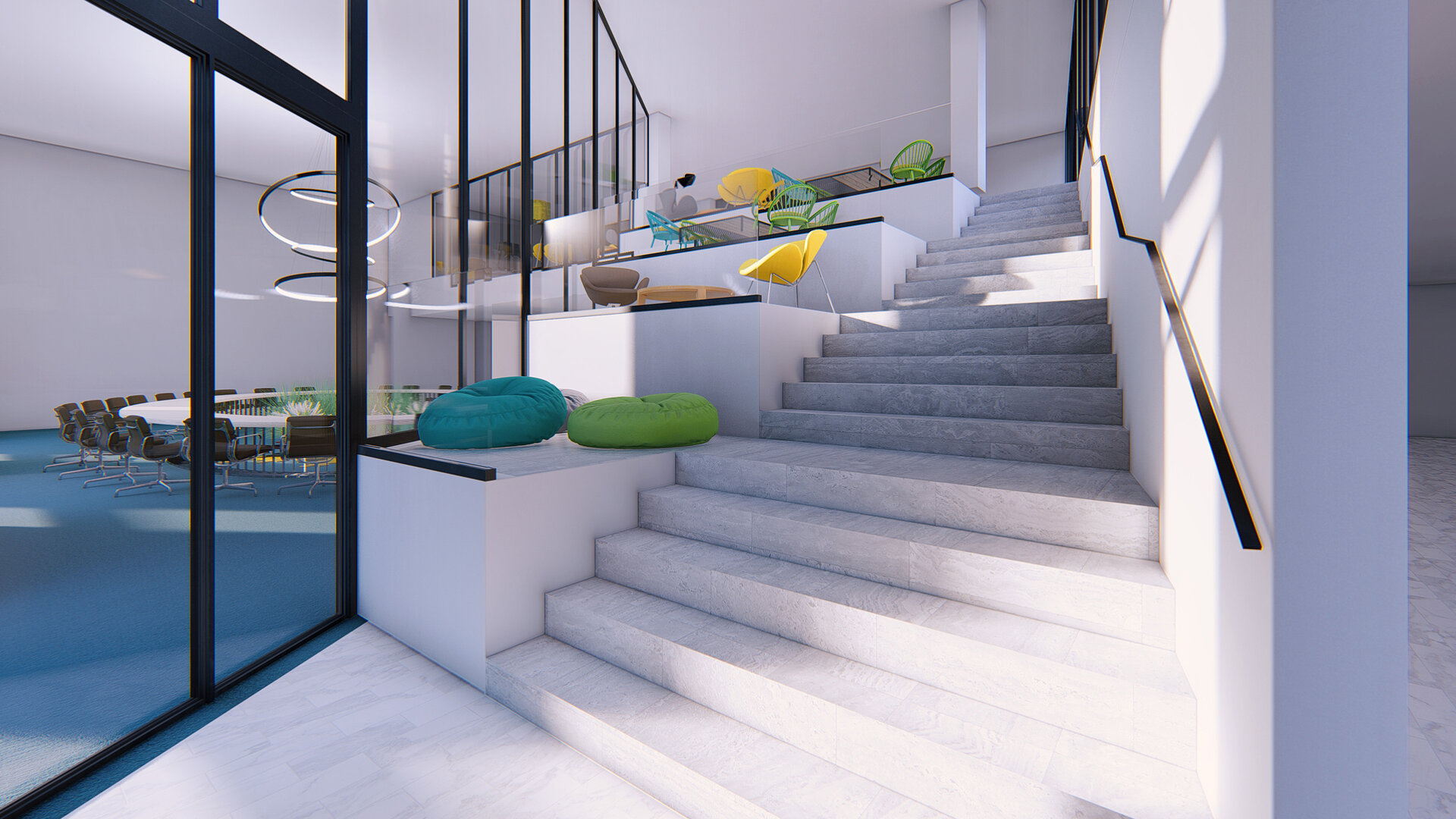 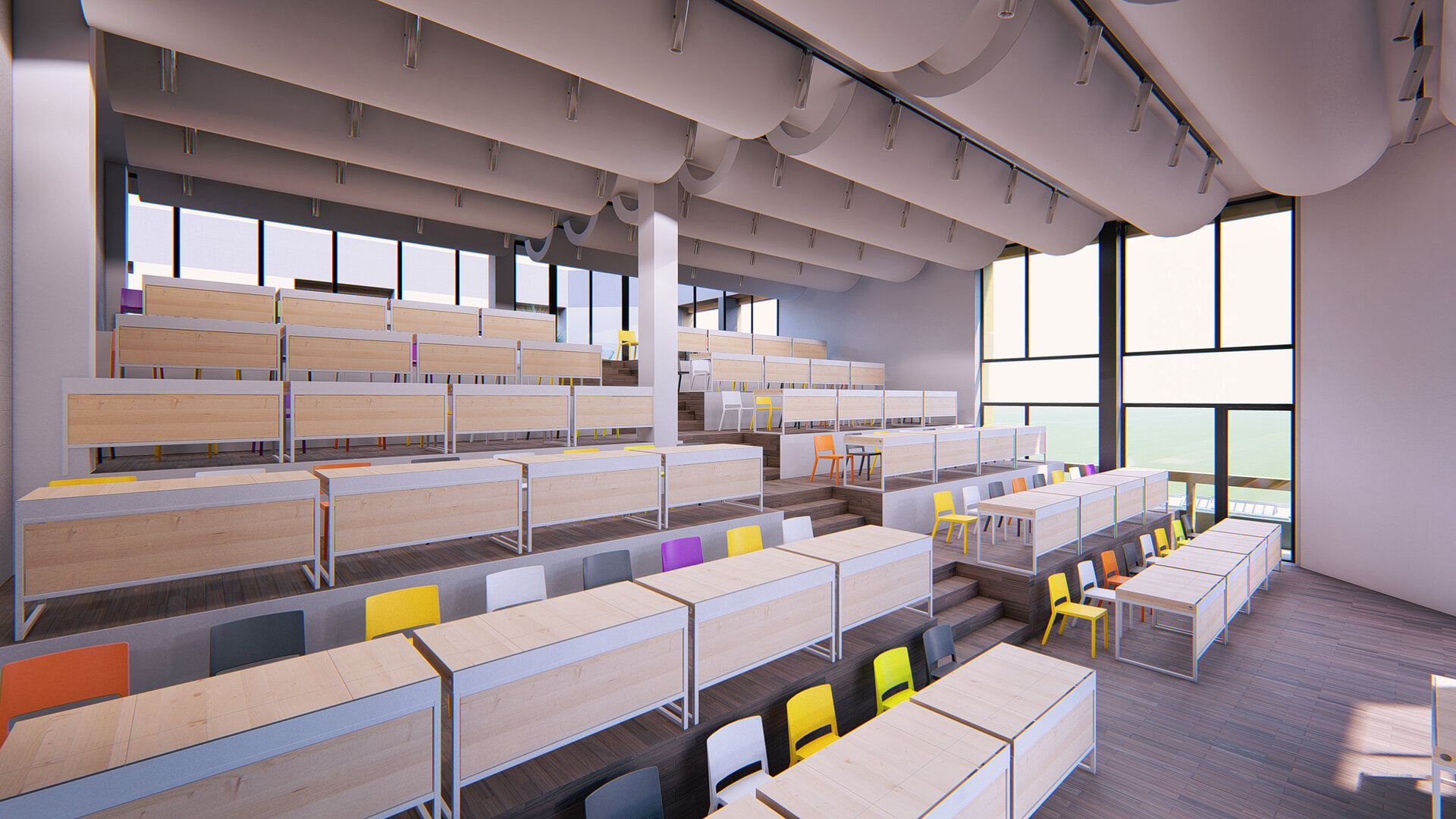 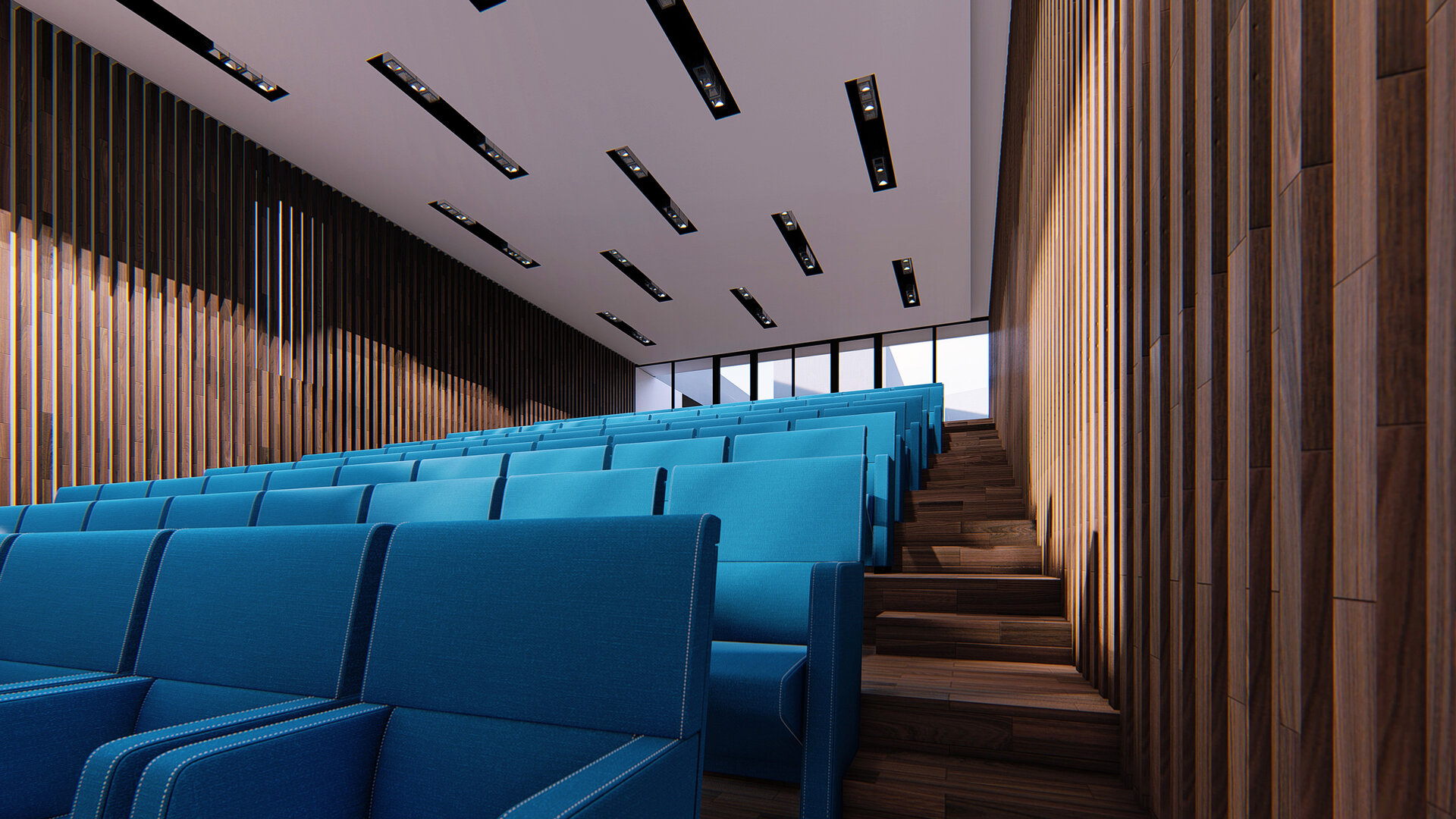 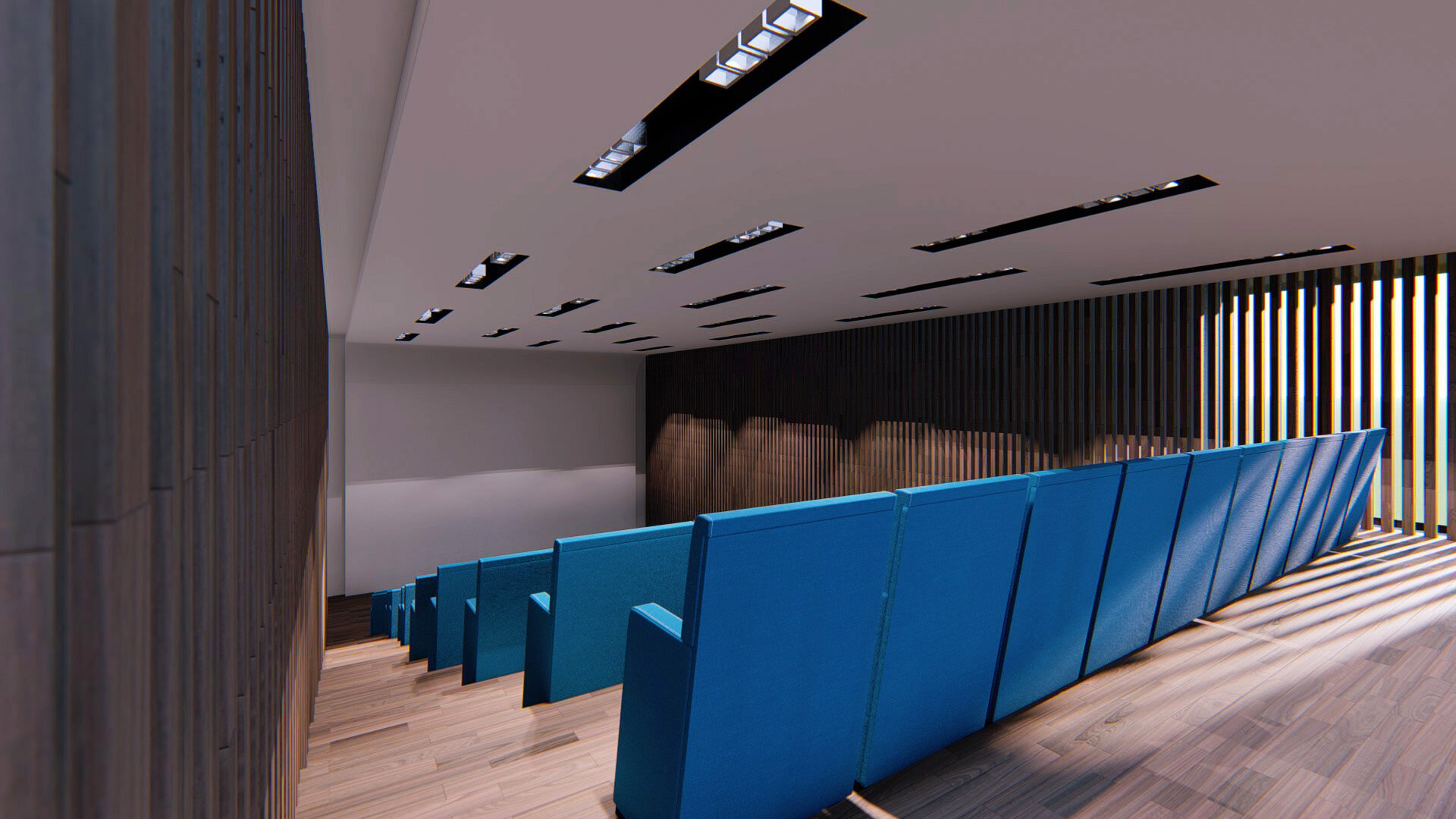 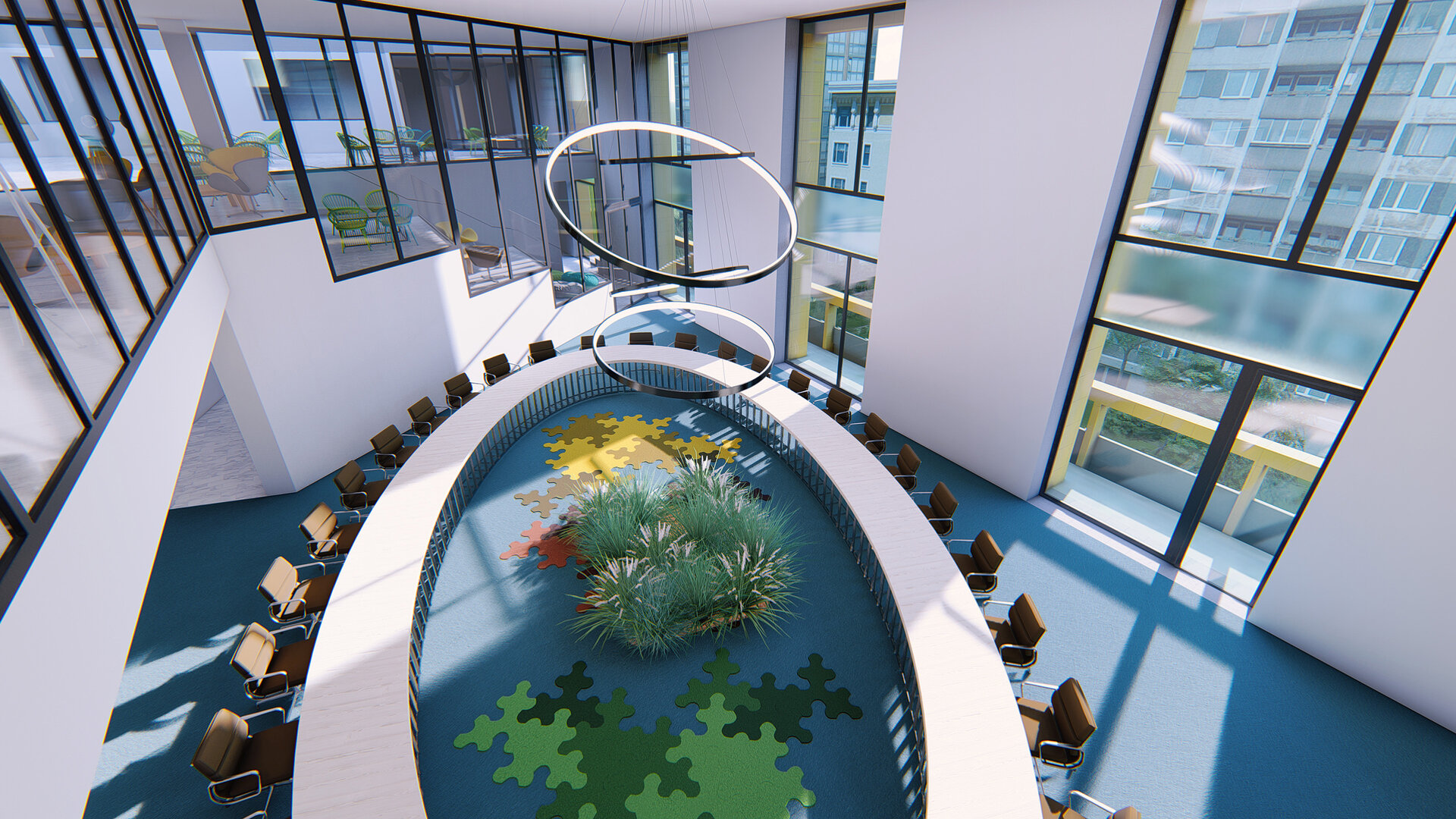 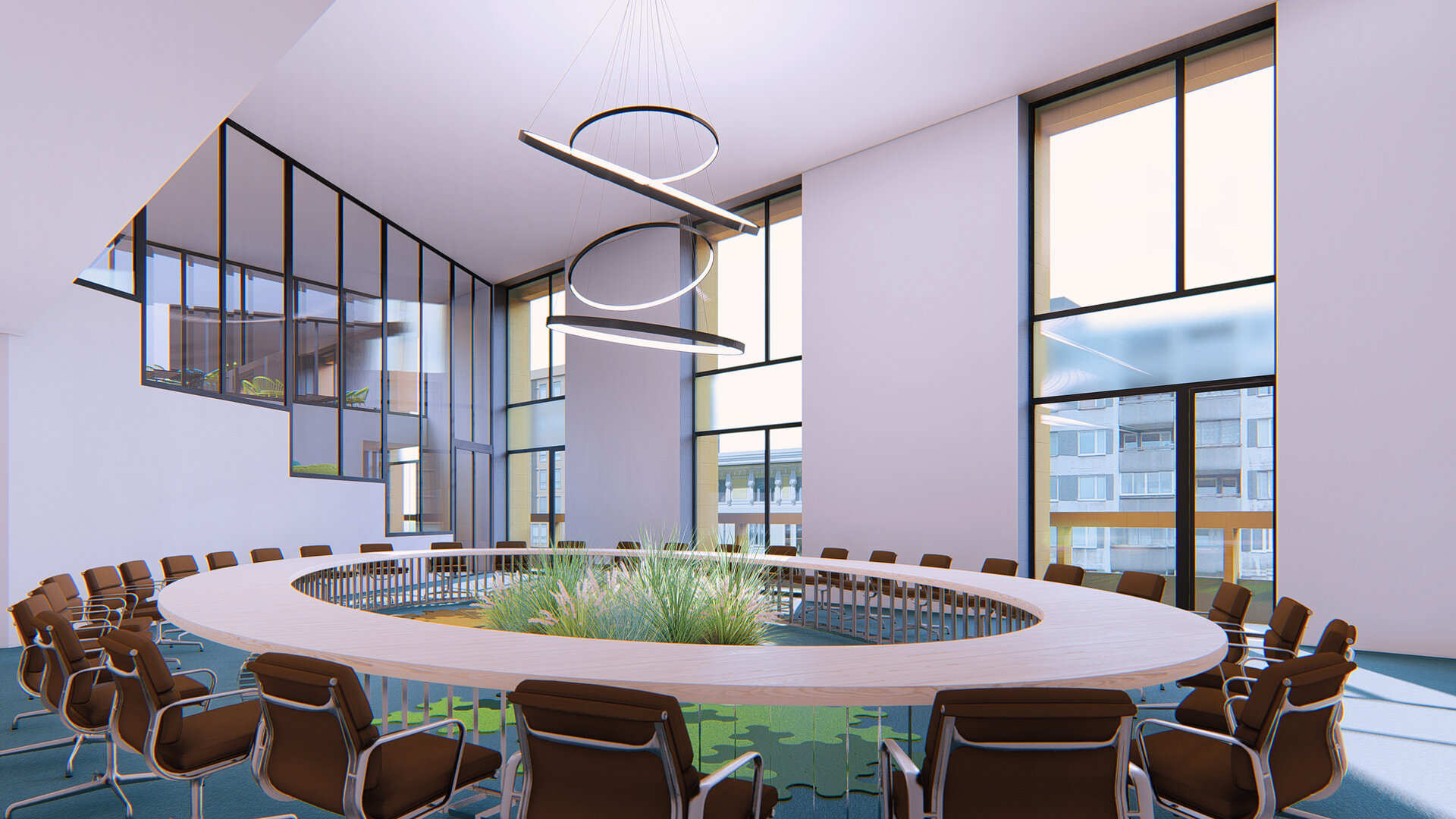 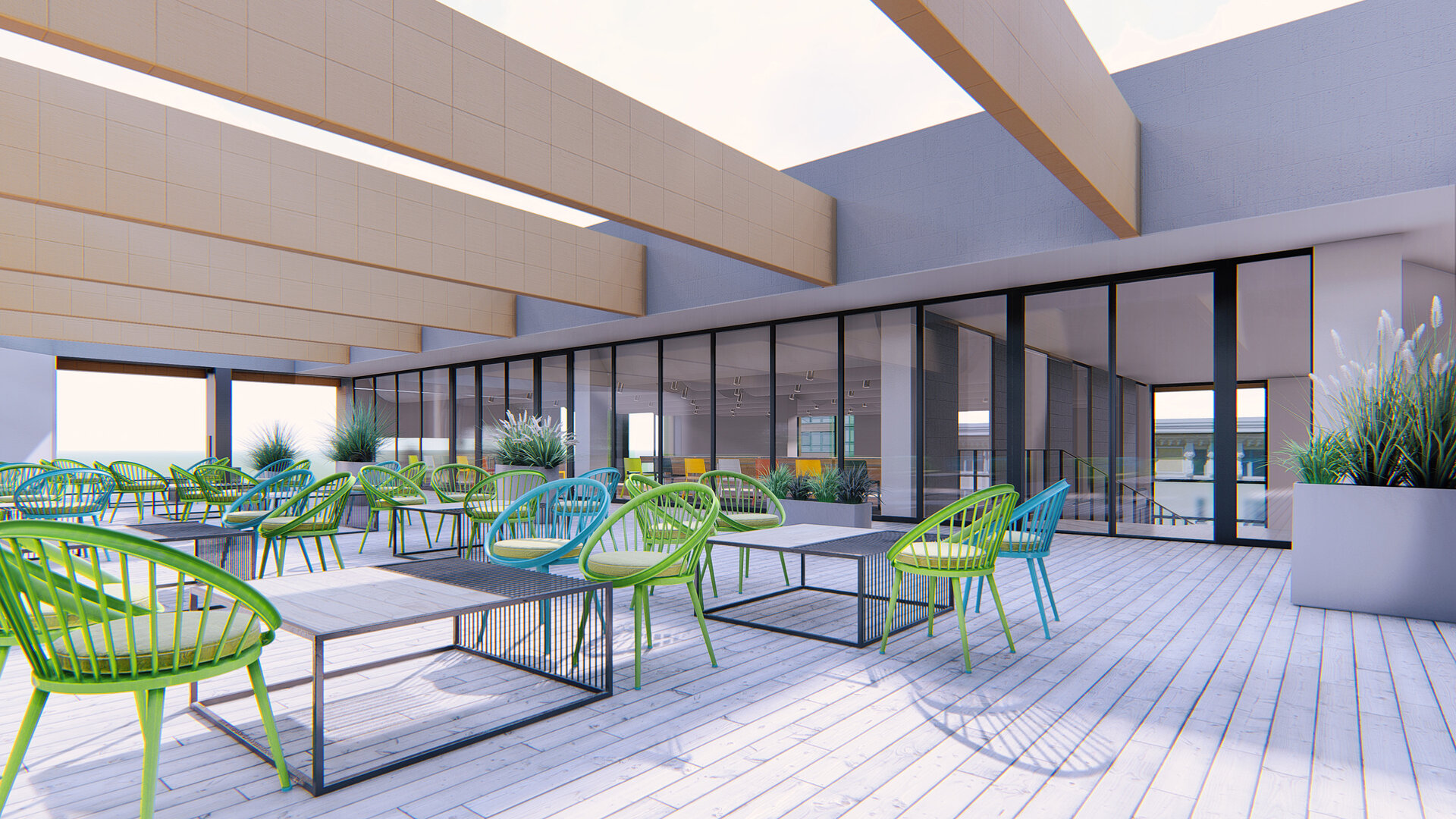 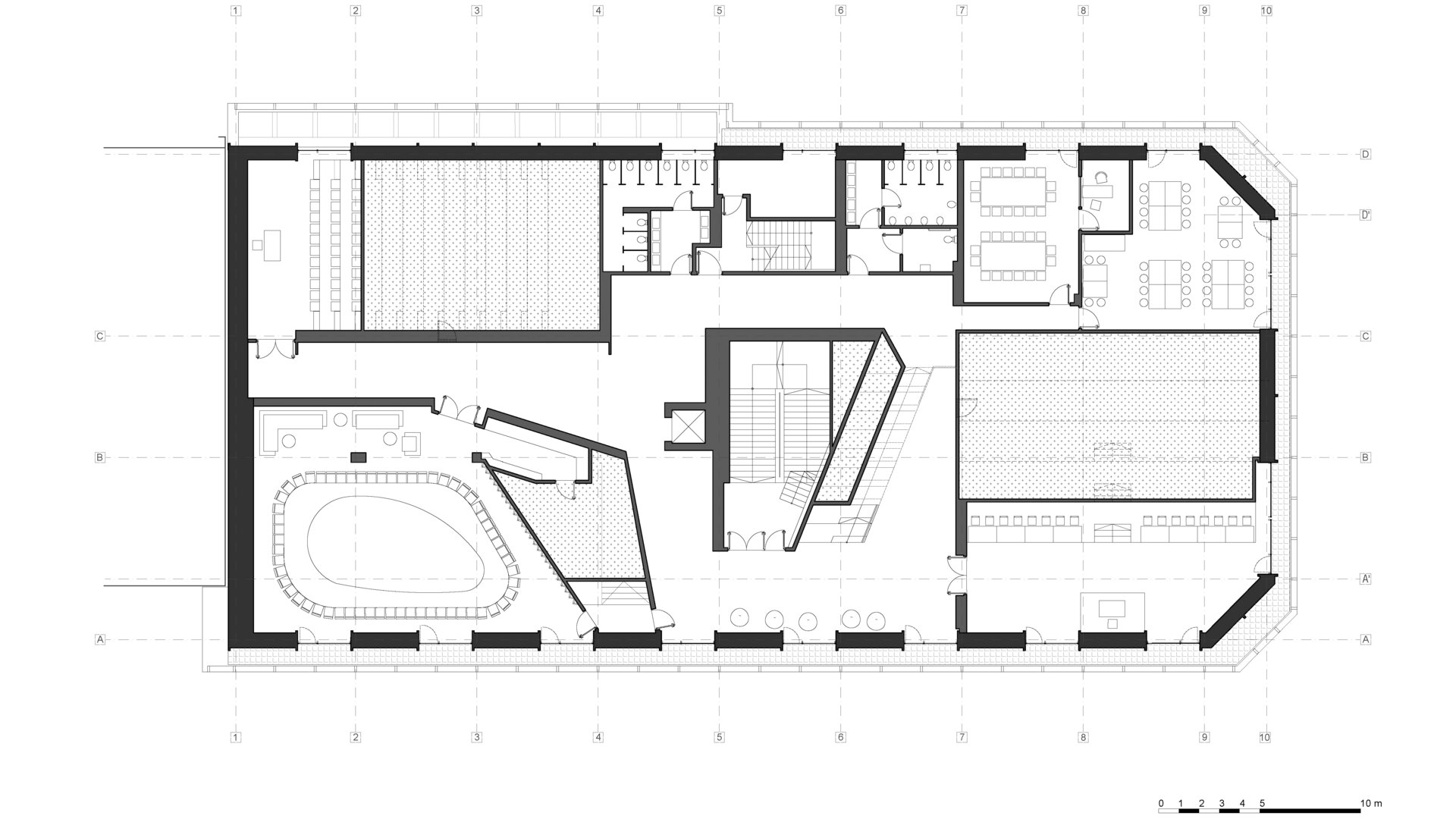 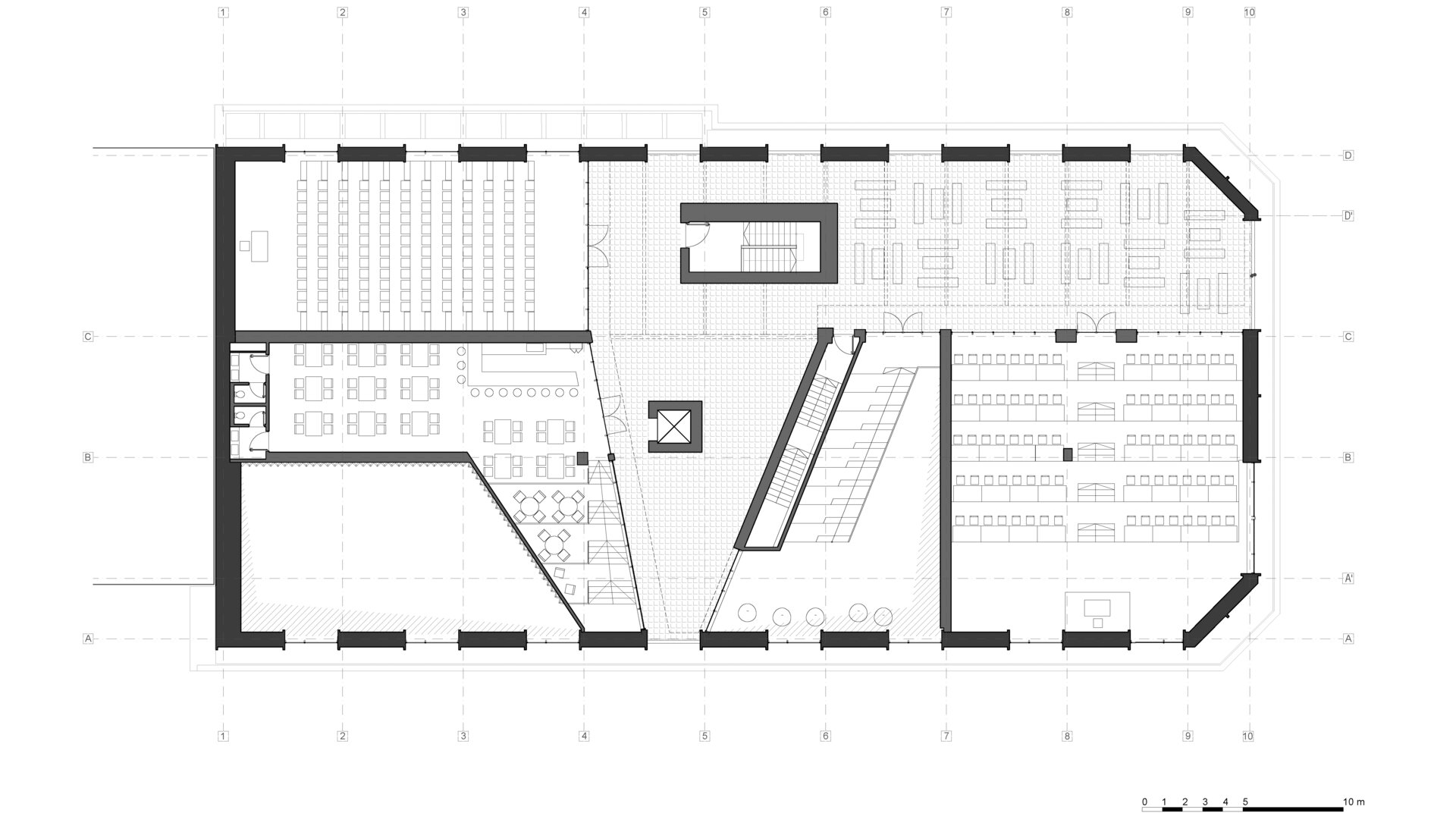 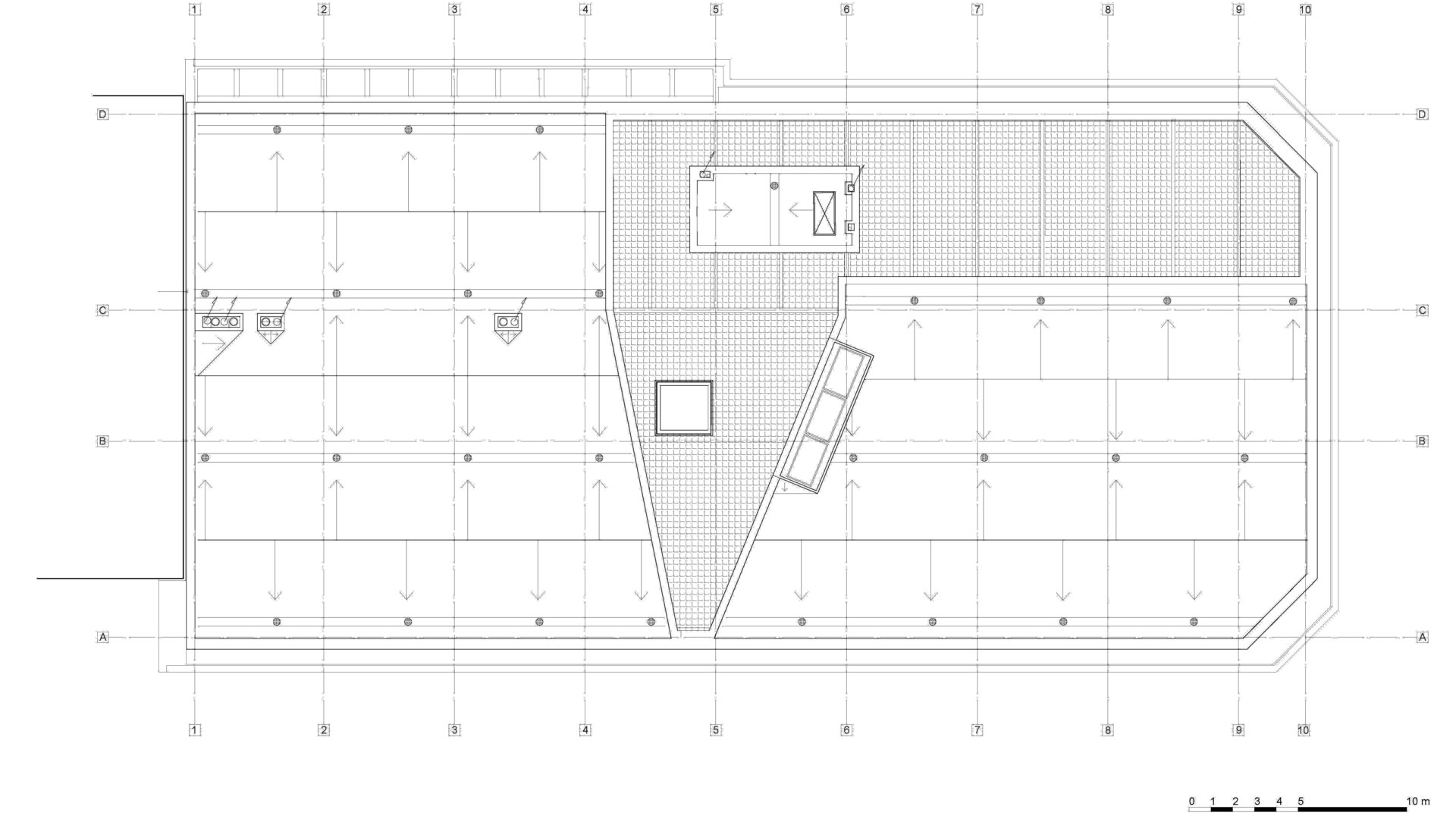 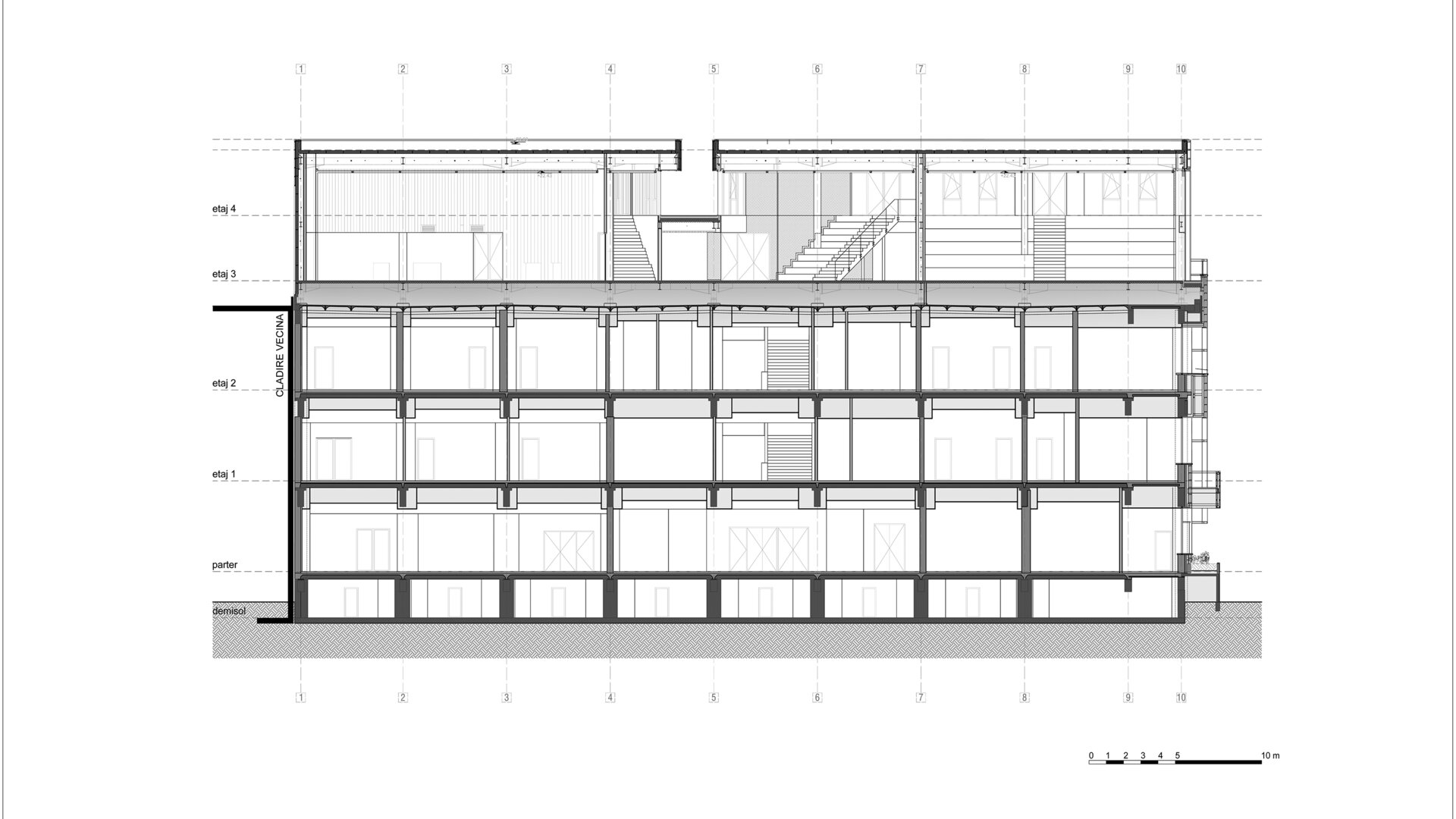