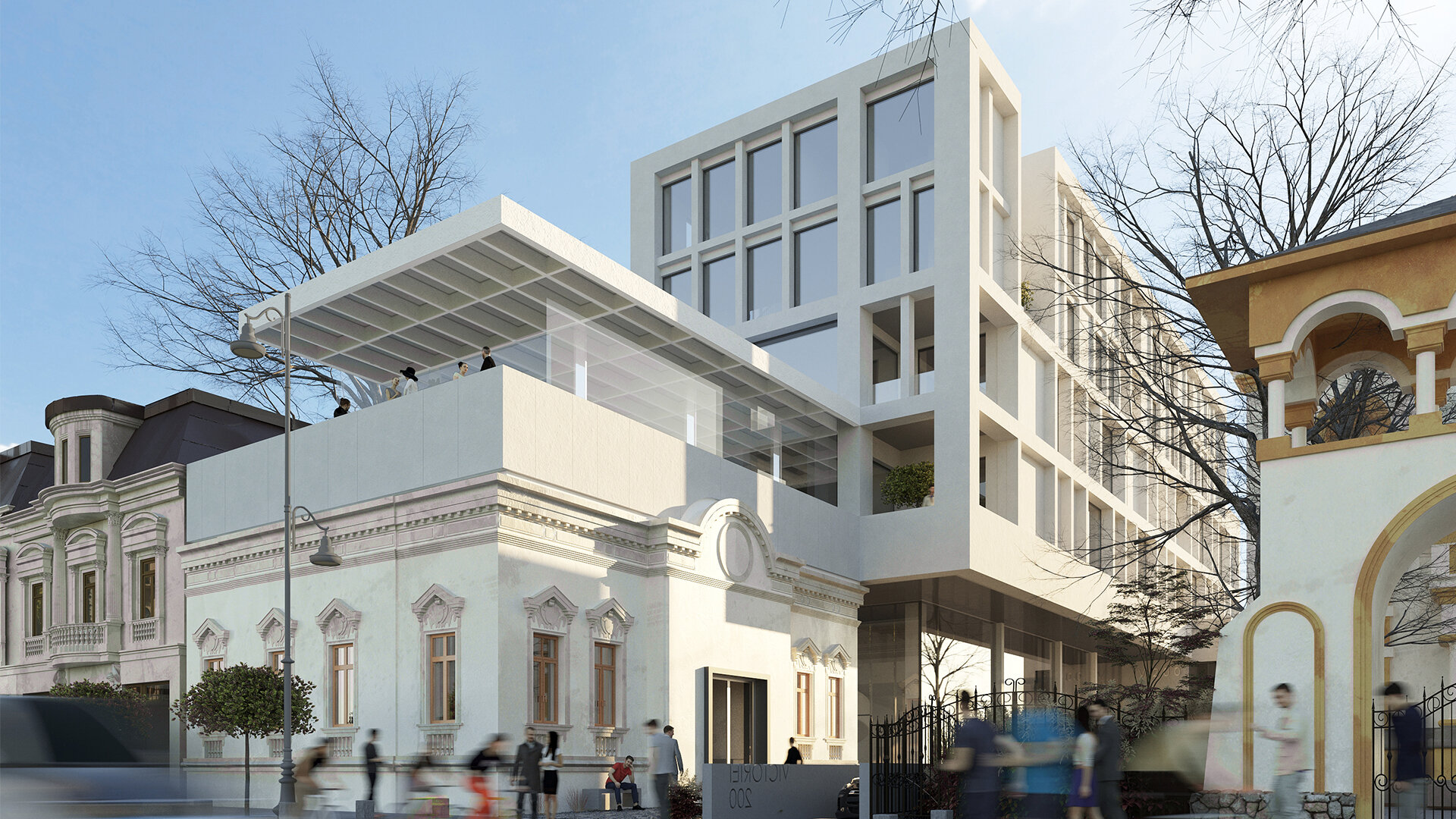 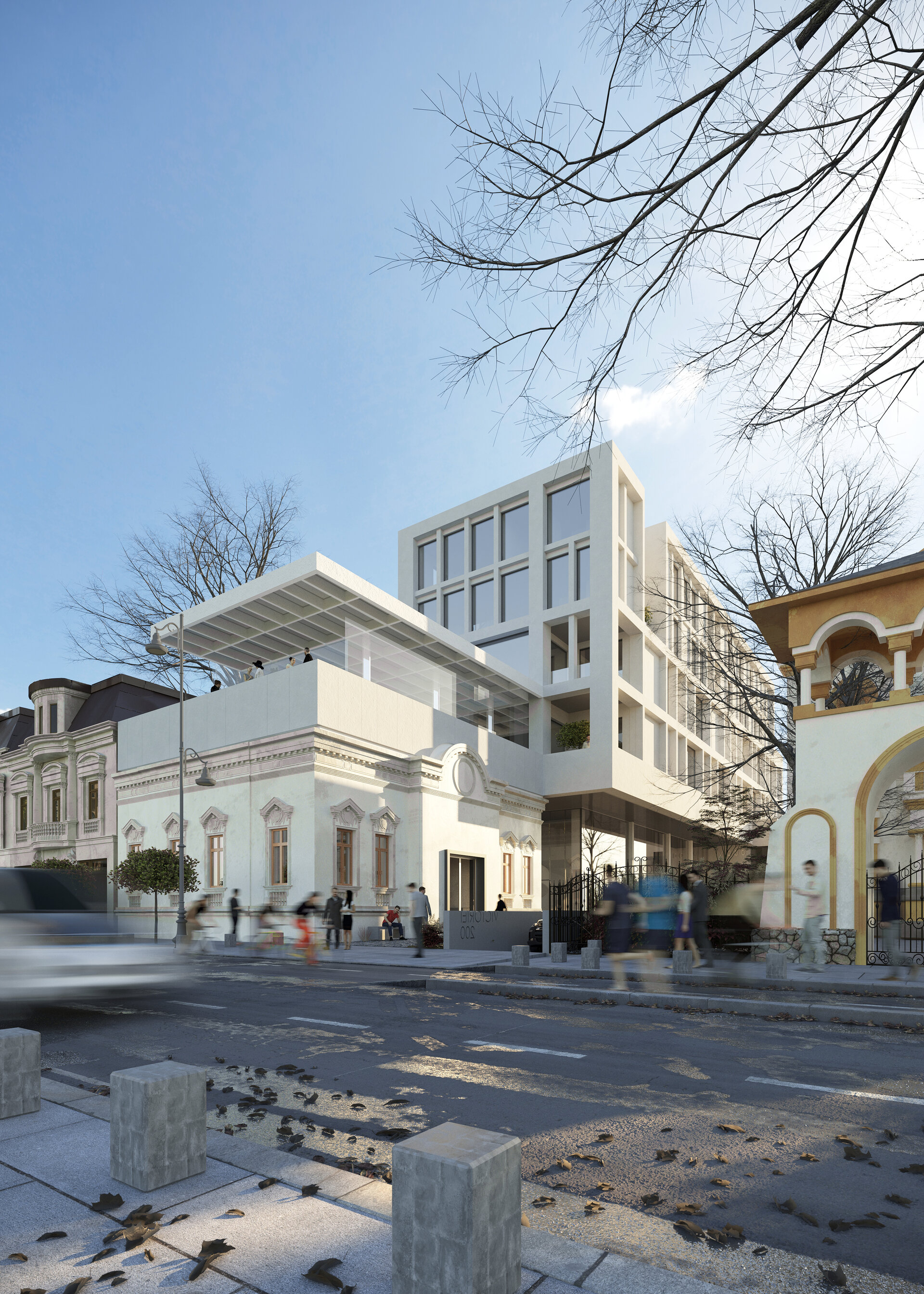 When dealing with historical urban context, any architectural insertion should take into account the inherent value of the architecture already present, while bringing the contemporary into play.
Our architectural proposal’s main challenge was to find the balance between old and new, with respect to the surrounding buildings and the building on the plot, while using an up-to-date approach for the intervention.
The site access was key to our architectural solution, given the narrow width of the site. It was essential to create a welcoming and intriguing entrance that would bring interest for pedestrians, since connecting the new functions to the city life was one of our main goals.
Another challenge was finding an architectural vocabulary that would intercede between the two buildings on the site, in terms of new vs. old, and in relation to space functionality. The different functions are separated vertically: the ground and first floor are mainly public, the second and third floor mainly office areas, and the fourth and fifth floor residential, which generated the façade layout. The façade grid brings rhythm to the overall appearance of the building.
The ground floor of the new building and the last floor of the old one (newly added) are completely see-through. The use of glass extends the interiors and is a means of communication between private and public areas, while still maintaining a certain level of intimacy.
Another element that creates a dialogue between our intervention and the surroundings is the seemingly weightless cantilever on top of the existing building directed towards the “George Enescu” museum, an architectural monument placed right across Calea Victoriei that has an overwhelming appearance. The cantilever hosts beneath a place for events, book releases and temporary exhibitions, that work well in relationship with both the library hosted in the lower floors of the existing building and the open co-working space on the the second floor of the new building.
The old and new buildings are articulated through a public space, free of obstructions and that can host a variety of activities, such as open-air art exhibitions, as well as cafés, retail, office. The intervention aims to provide a high quality for both pedestrians and building users. 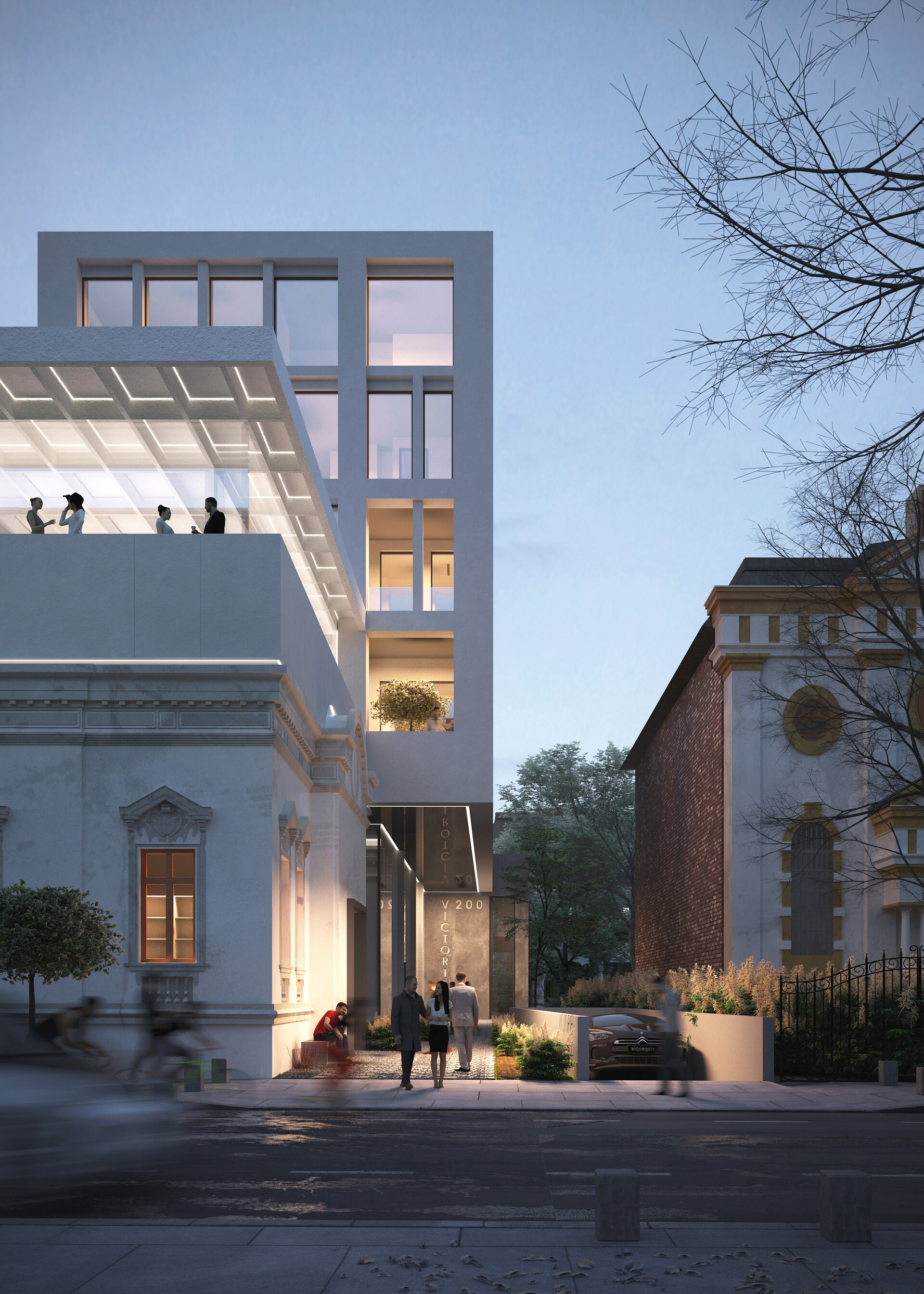 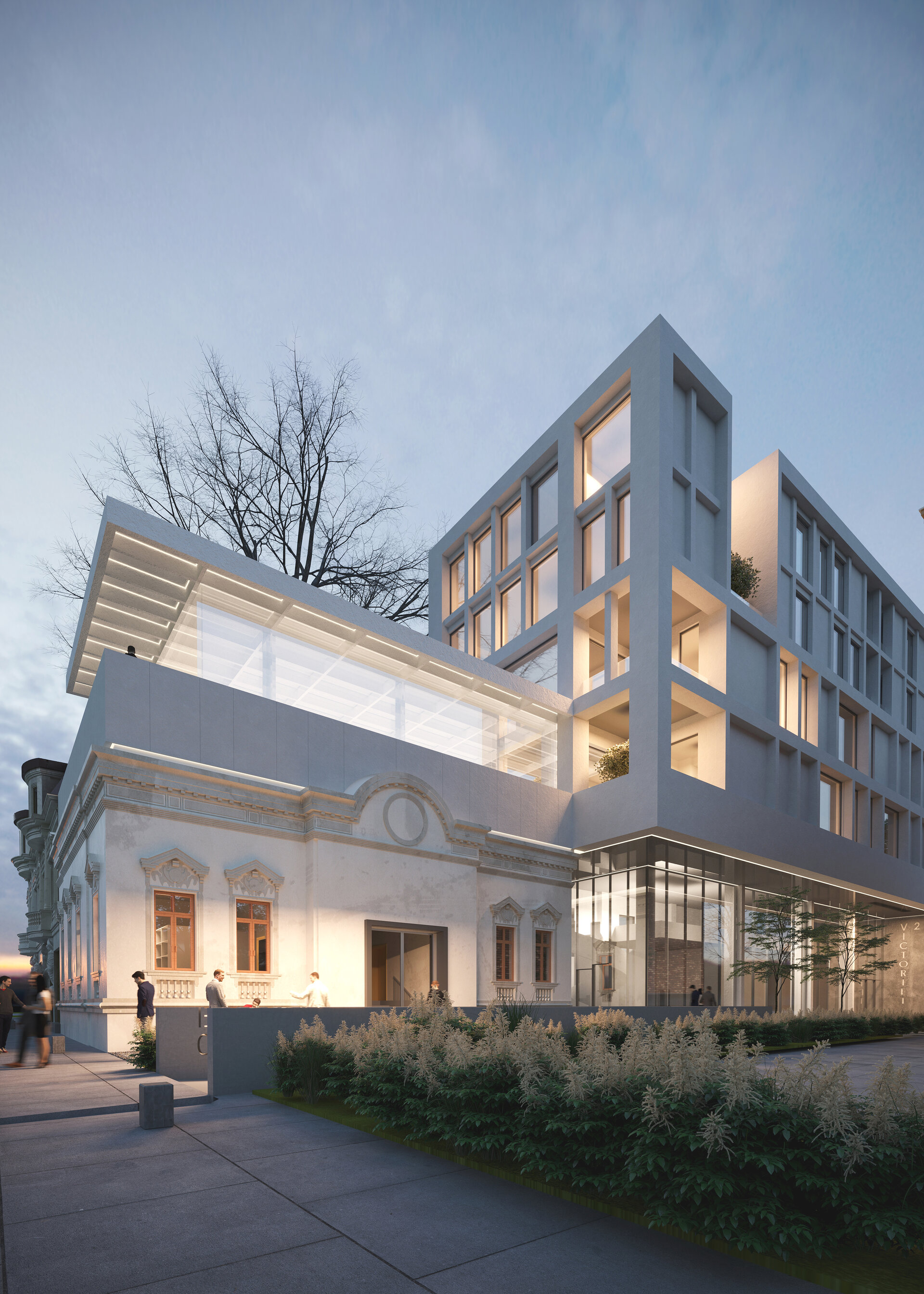 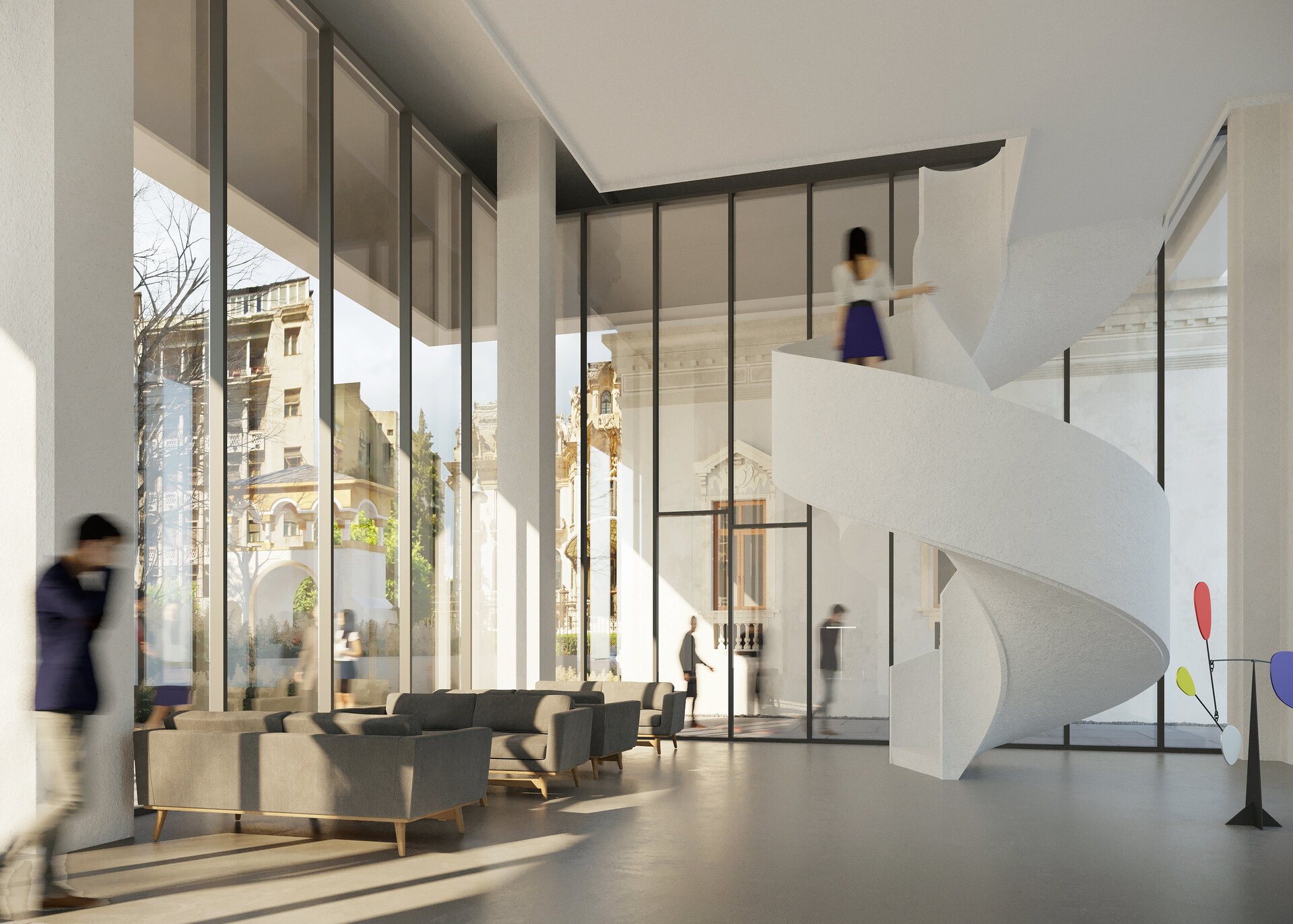 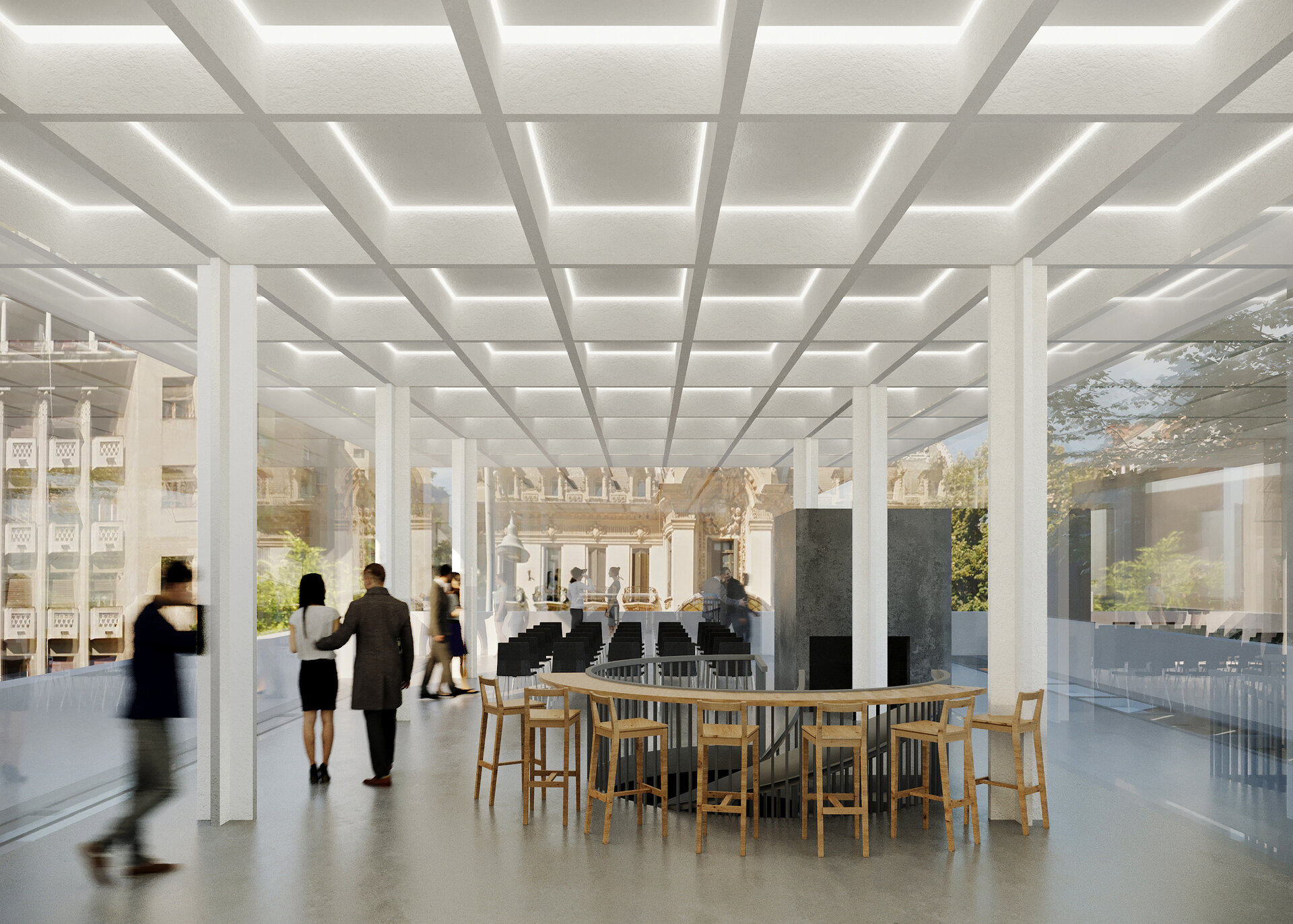 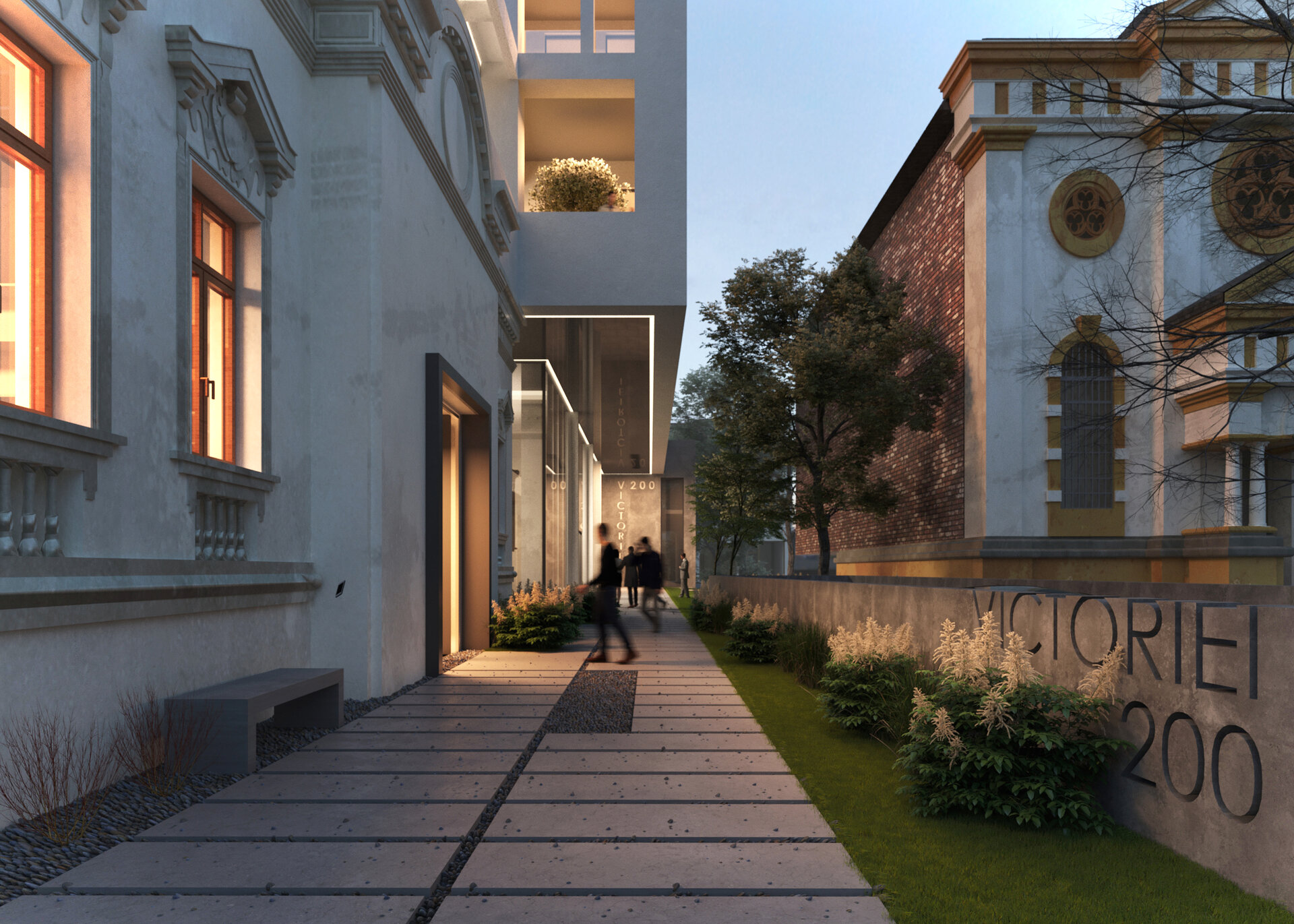 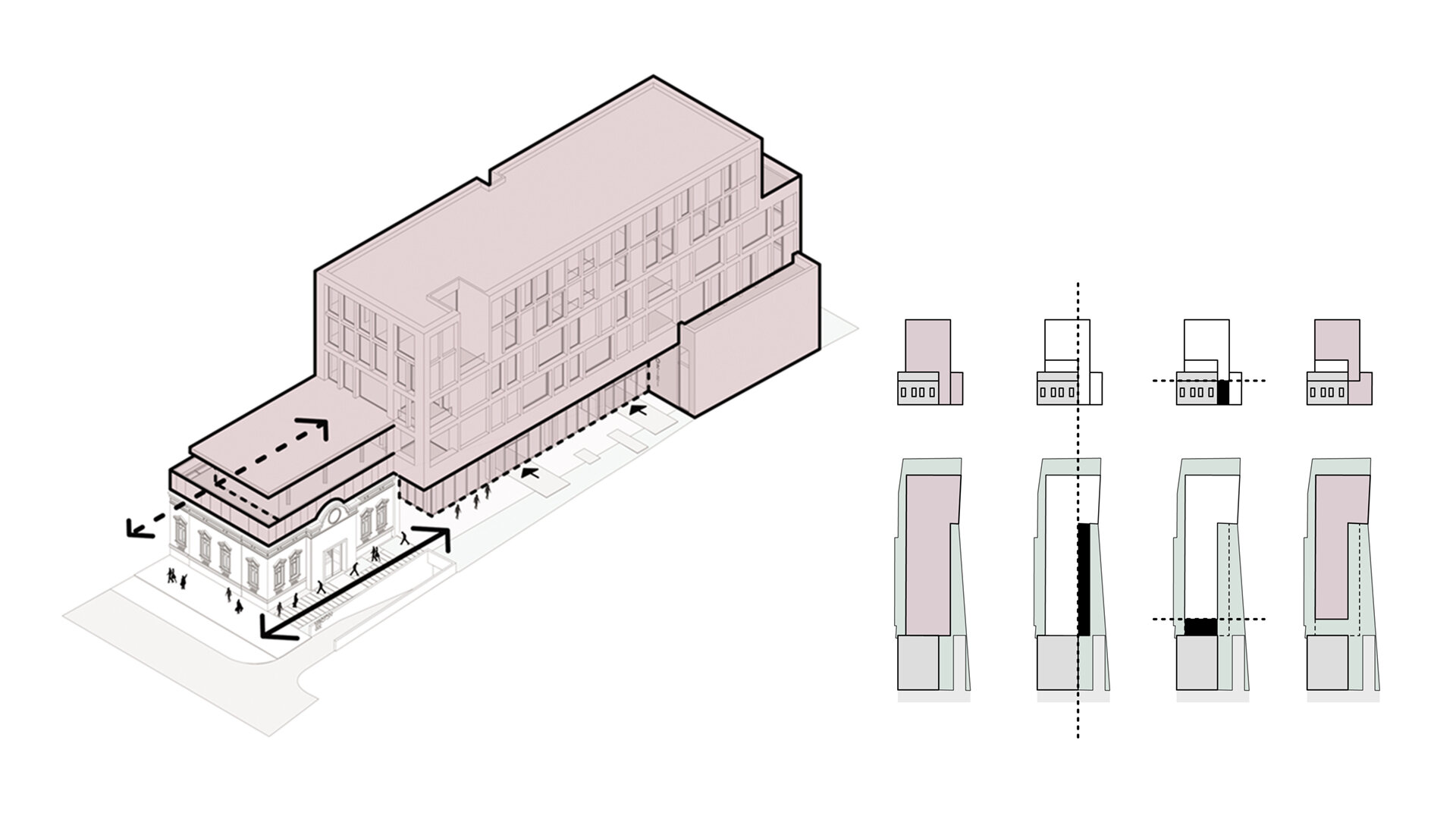 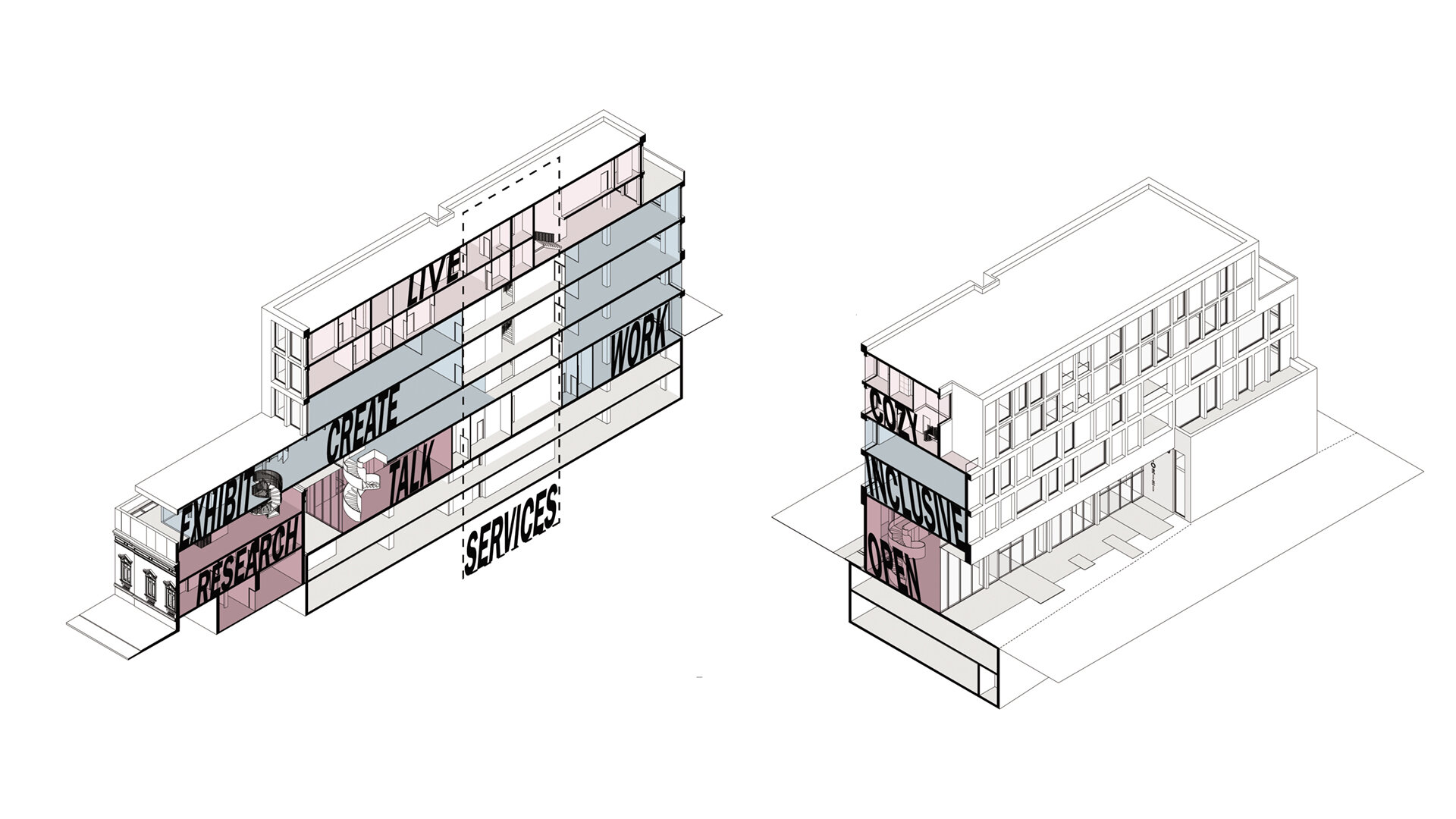 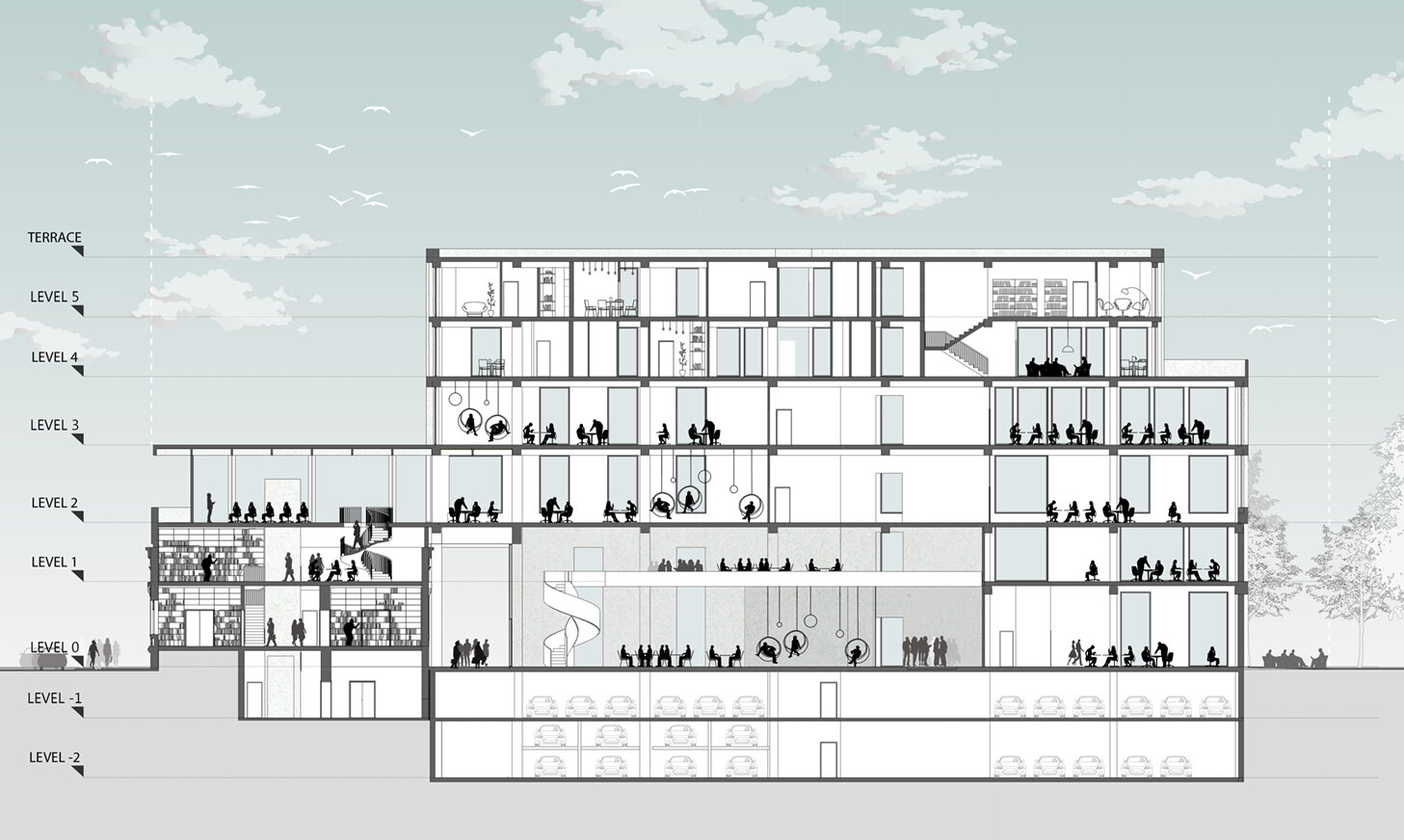 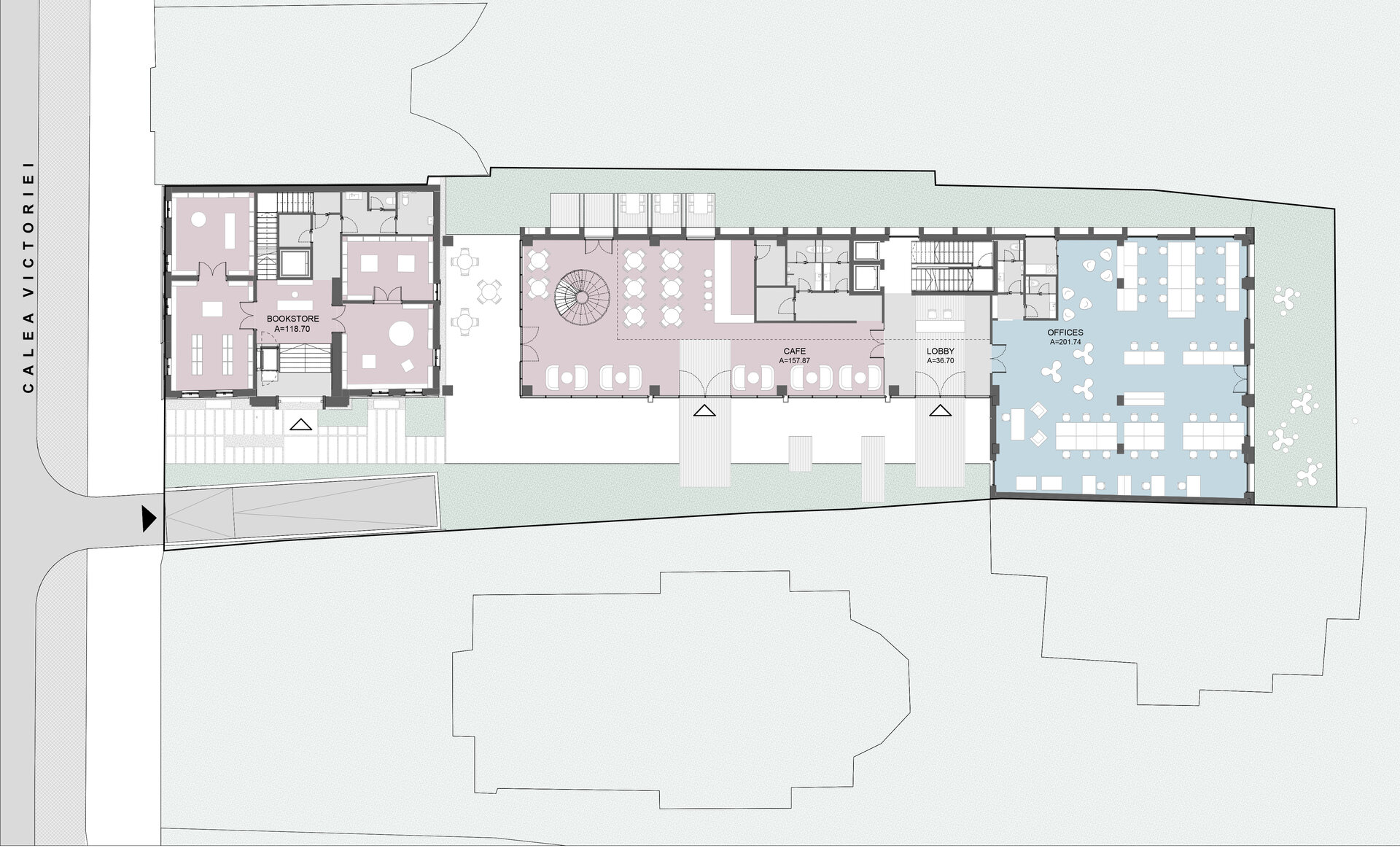